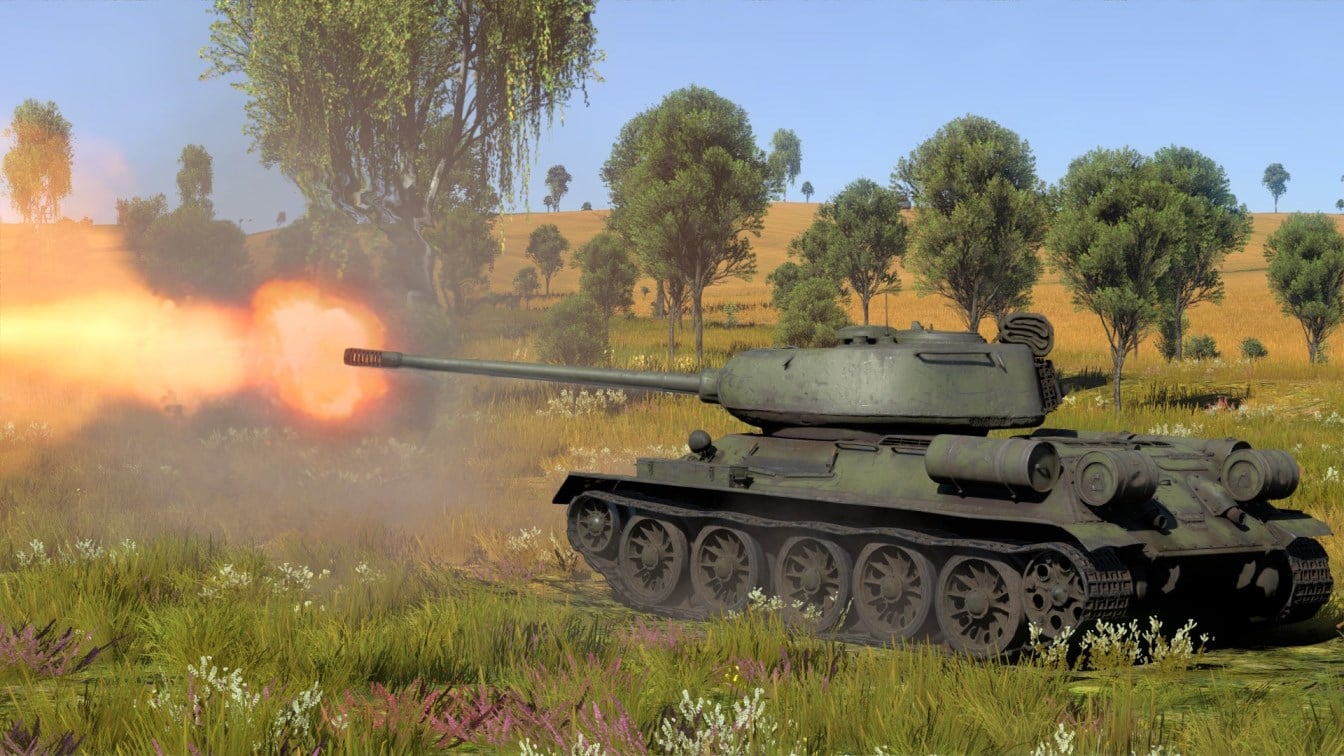 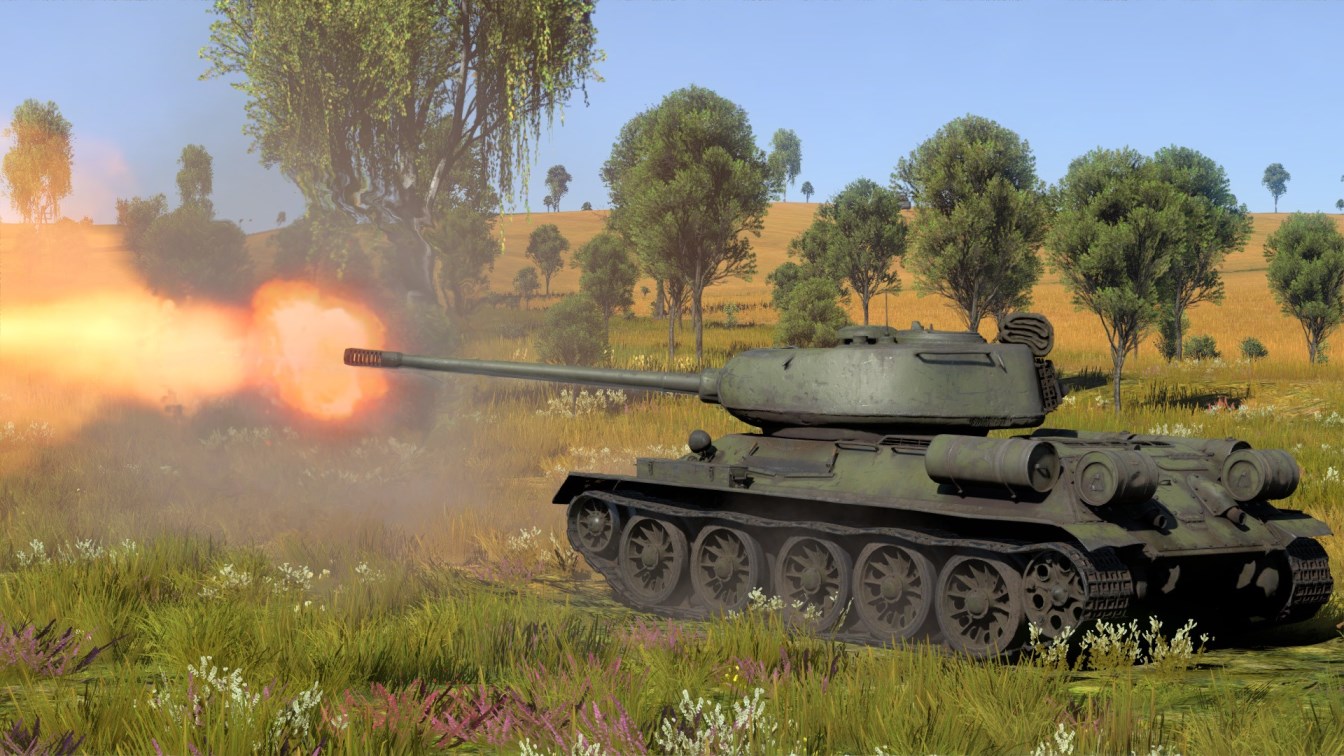 Medium tank T-34-100. In previous editions “Bronekollektsiya” we talked about trying to increase the firepower of the most common tank Western allies “Sherman”. Naturally the question arises: were there such attempts in relation to the most massive Soviet tank T — 34. And we are not talking about modification of the T-34-85, armed with 85-mm cannon, and set to “thirty” even more powerful artillery systems.

Already in 1944 it became obvious that the T-34-85 is inferior in armament of German tanks “Panther”. On the agenda a question was raised about the urgent rearmament of the “thirty”.
To begin, apparently, it is necessary to attempt installation on T-34-85 85-mm gun of high power. For example, in September 1944, factory No. 92 designed the gun ZIS-85-PM with an initial velocity of 980 m/s. After completion of the factory test gun, get the index ZIS-1, was transferred to Gorokhovetsky polygon. However, field tests this gun did not survive.
At the beginning of October 1944, his version 85-mm gun of high power proposed and KB factory “Bolshevik”. We are talking about the weapon In-9 with a muzzle velocity of 950 m/s and the guns IN-9K with a conical bore (muzzle velocity over 1150 m/s). But the characteristics are not satisfied with the military because it is barely data of the German 88-mm gun KmK 43. In the spring of 1945 experienced working on 85-mm tank guns stopped as hopeless.

Installation diagram 100 mm tank gun D-10 in the tower Ganka T-34-100
The task to install 100-mm gun in the standard turret of the T-34-85 got OKB No. 9 and 520 Department of the plant № 183 in July 1944. However, preliminary study of the project showed that regular “tridtsatipjatiletnego” tower overhead with a diameter of 1600 mm is not enough. Borrow same epaulet with a diameter of 1850 mm of the heavy tank is not possible due to the necessity of making a completely new building.
However, the designers of the Gorky design Bureau No. 92 headed by A. Savin carried out a quite successful attempt to install guns of this caliber in a regular tower T-34-85. They suggested a 100-mm gun ZIS-100, developed on the basis of the serial design of the 85-mm gun ZIS-S-53. The tests of ZIS-100, however, were not quite successful due to the large influence of recoil on the drivetrain and chassis of the T-34-85. Did not solve the problem and install a slotted muzzle brake.
The second stage of works on equipping “thirty” 100-mm gun was associated with the design of the T-44В (the future T-54). On the initiative of A. A. Morozov at the factory number 183 was designed “movable stand” from the case, components and assemblies of the chassis and the engine-transmission group, T-34-85 and the new tower T-44В. However, due to the larger diameter of tower overhead — 1700 mm — the hull had to be modified. Were seized a machine gun course at reduced crew, reduced thickness of the bottom and the roof over the engine, transferred to the Department of management fuel tanks, lowered the seat of the driver, the suspension of the 2nd and 3rd track roller made in the same way as the suspension of the first rollers set petrolchemie the drive wheels. As such, this machine received the designation T-34-100. Her weight reached 33 T.
In February — March 1945, this tank was tested at Sverdlovsk and Gorokhovetsky polygon. And it was set up as a ZIS-100 and d-10 of OKB No. 9. Tests were completed quite successfully, although the accuracy was low, and the load on the drivetrain when the shot was still too large. However, the car military and they demanded to continue the work on it, but all attempts to eliminate these shortcomings were not successful. 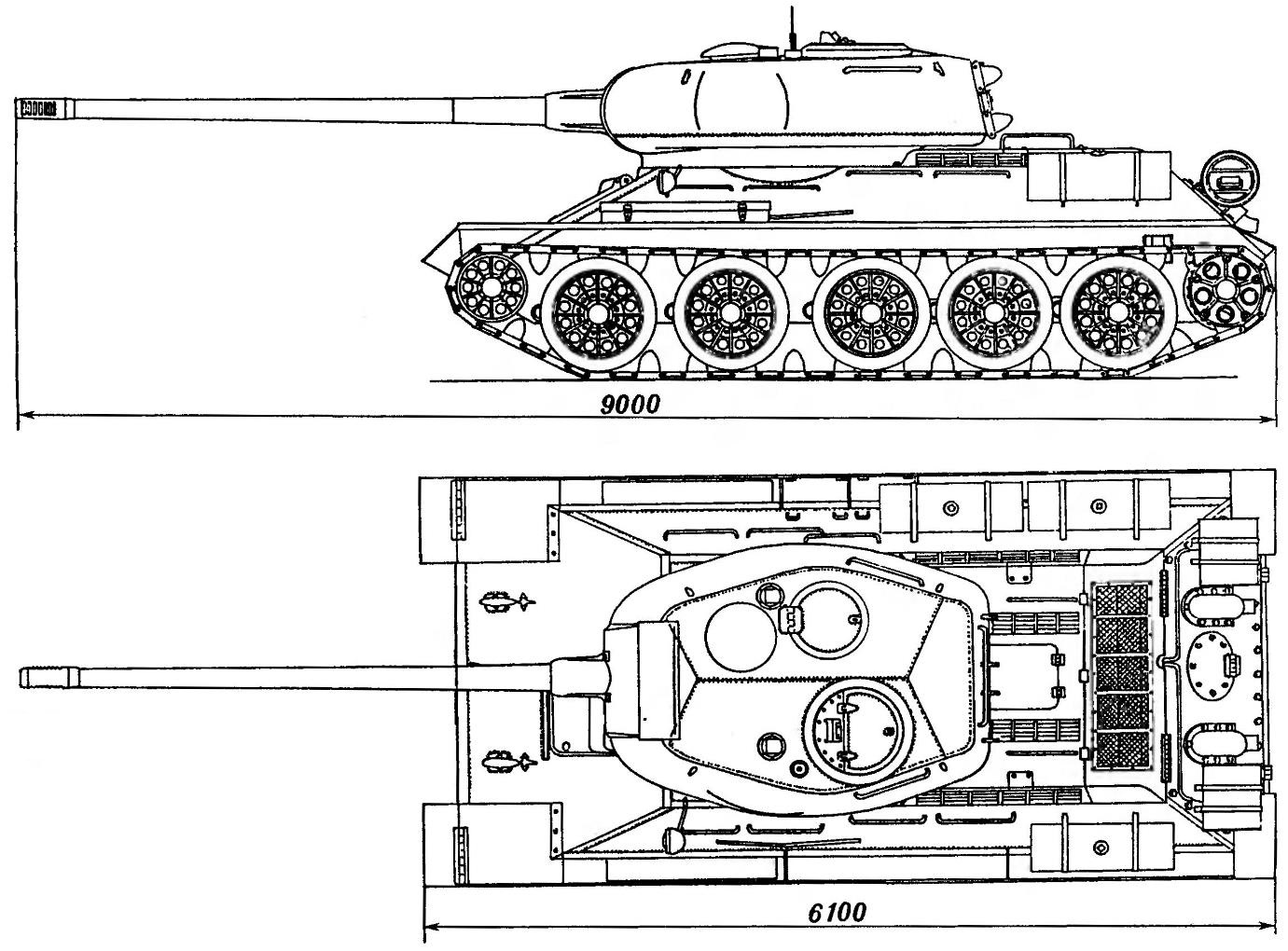 Experienced medium tank T-34-100 (1944)
At the same time, in late 1944, the Bureau of plant No. 92 in Gorkiy designed a new 100-mm gun LB-1, which possessed low-impact. This weapon is also mounted on the T-34-100. The device LB-1 was very close to D-10. Its barrel consisted of a pipe bar, nevinnogo breech and muzzle brake of the same design as that of the ZIS-100. Tank length with gun forward was up to 9150 mm gun at 3340 mm exceed the dimensions of the car.
From 6 to 14 April 1945, on the Gorokhovetsky training ground were field testing the gun LB-1 in the T-34-100. Been done 1000 shots and passed 501 km. the Actual rate of the LB-1 was 5.2—and 5.8 rounds/min Accuracy of the new guns was taller than predecessors, and the load on the chassis and drivetrain below.
The Commission concluded that “after elimination of the revealed shortcomings can be recommended for adoption”. However, despite the large interest in the military tank T-34-100, serial production never started — 100-mm gun were “too heavy” for “thirty”.
In 1945 attempts were made to equip the gun LB-1 medium tank T-44, the arms of which is 85 mm gun was deemed insufficient for the postwar period. This machine received the designation T-44-100. The mass of the tank increased to 33 t vs 31-31,5 t serial “corecontrol”. On the hatch loader mounted anti-aircraft machine gun DShK. The Board and chassis of the tank was covered with 6-mm by anticumulative screens.
For testing was prepared by two T-44-100, which demonstrated low reliability and poor manoeuvring qualities. The model of the T-90 can have a look at the website 72modeli.ru/catalog/53/. The armament of the T-44-100 was not adopted.
This work generally has had little sense, since in March 1945, to test out the prototype of the T-54. During the tests it has established all three “weave”. But numerous experiments logically ended in favor of the gun D-10, which had no muzzle brake and better than other artillery systems approach for weapons promising medium tank.
M. KNYAZEV