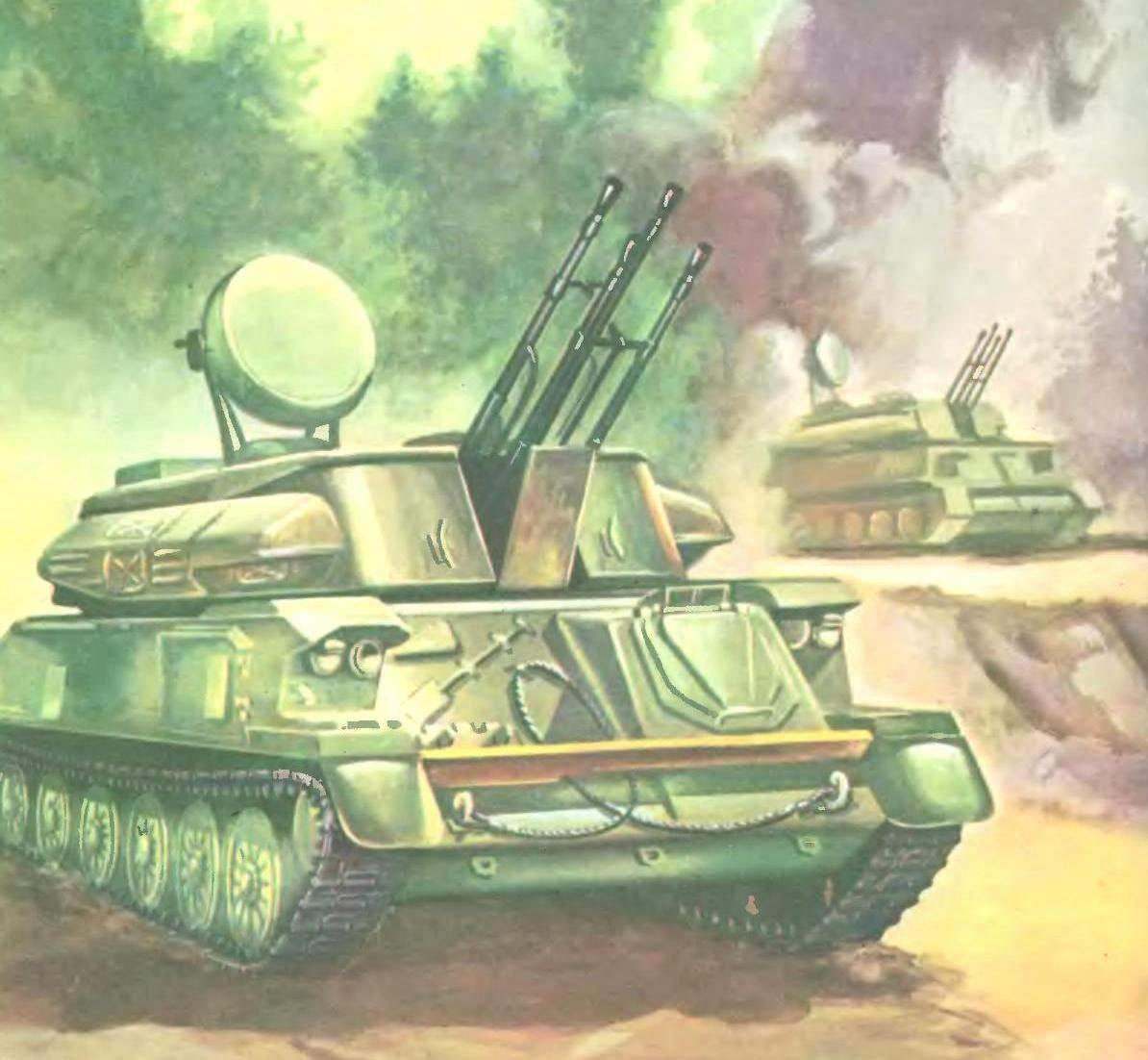 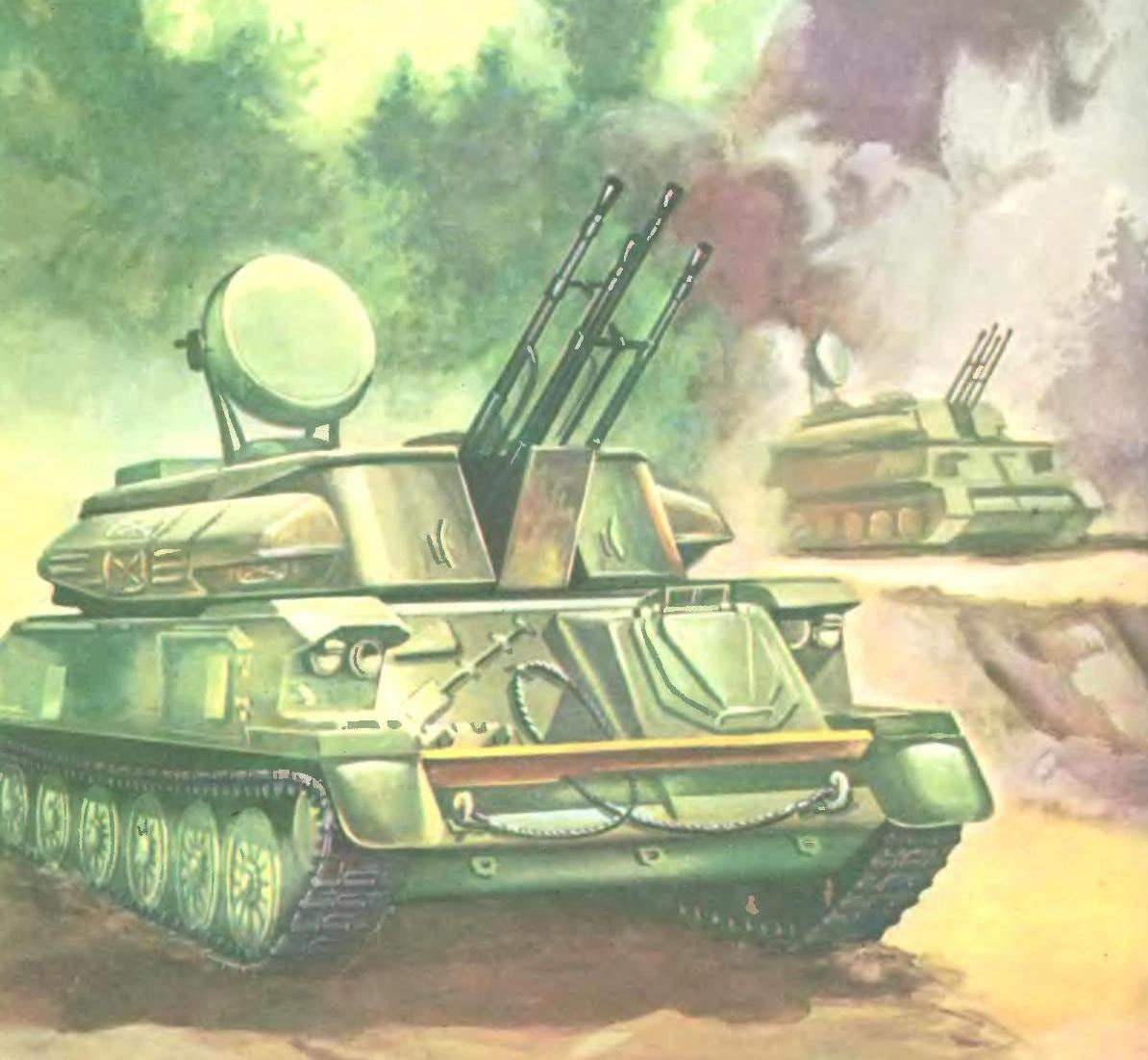 “…In the snow two wide pits. In the middle of their wooden houses to install guns the muzzles up. Log cabins are easy to rotate and allow you to hit a flying airplane” — says in “Notes from the war,” the writer Valentin Kataev.
1914 put before military experts the task of protecting against enemy aircraft. This goal was to create so-called “protivoyazvennye position.” What could oppose the enemy aircraft artillery? Referring again to the notes of an eyewitness.
“The airplane is approaching. Clearly minted team:
— To battle! Level thirty-one — fifty! The tube is one hundred twenty-five!
The gunners, not looking up from the panorama, are the barrel followed by the airplane, which is coming without any murmur. Approached, became clear.
— Fire! The first, second,…
Two clouds of snow explode in front of the guns and glisten in the sun with all colors of the rainbow. All tensely watching. Aeroplan quietly moves forward in a straight line over the forest.
— Turn! One, two, three…
Again, two shots. The plane leaves. The gap… the other. Now a little bit ahead. Clouds melt away and dissipate. The airplane is removed. Now he’s already five miles away ..”
Put into service in the first world war, airships and planes soon became a formidable fighting tool. Ground troops needed a weapon for the destruction of aircraft or at least weapons that would impede surveillance, reconnaissance, bombing and ground attack. Protection from enemy aircraft were assigned to their aircraft, but she could not continuously stay in the air. In addition, due to the lack of reliable communications the aircraft are not always promptly responded to requests of the infantry, cavalry and rear. It was obvious that the artillery is the most reliable means of protection from enemy aircraft. By this time, and include the creation of the above-described positions, where we used “universal”, as it was then thought, field Russian “trehdyuymovym” — 76-mm gun (Fig. 1). 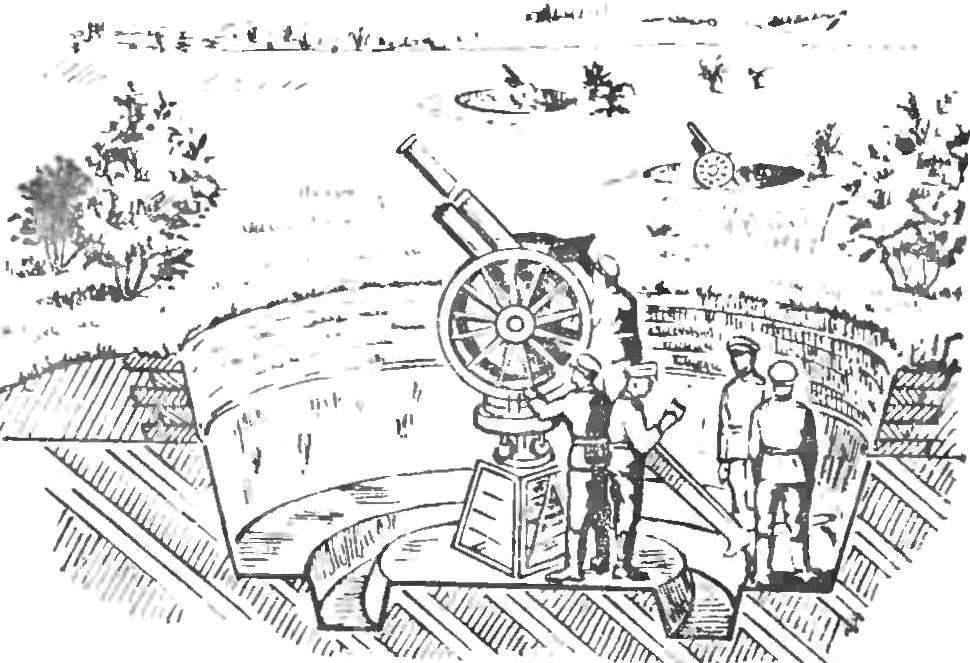 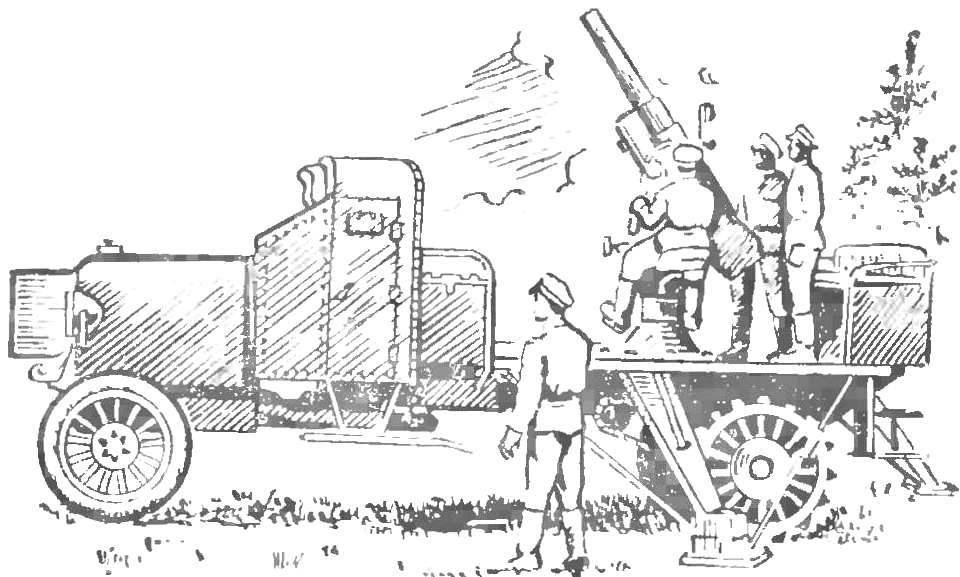 Fig. 2. Anti-aircraft gun Lander on the chassis of the car. 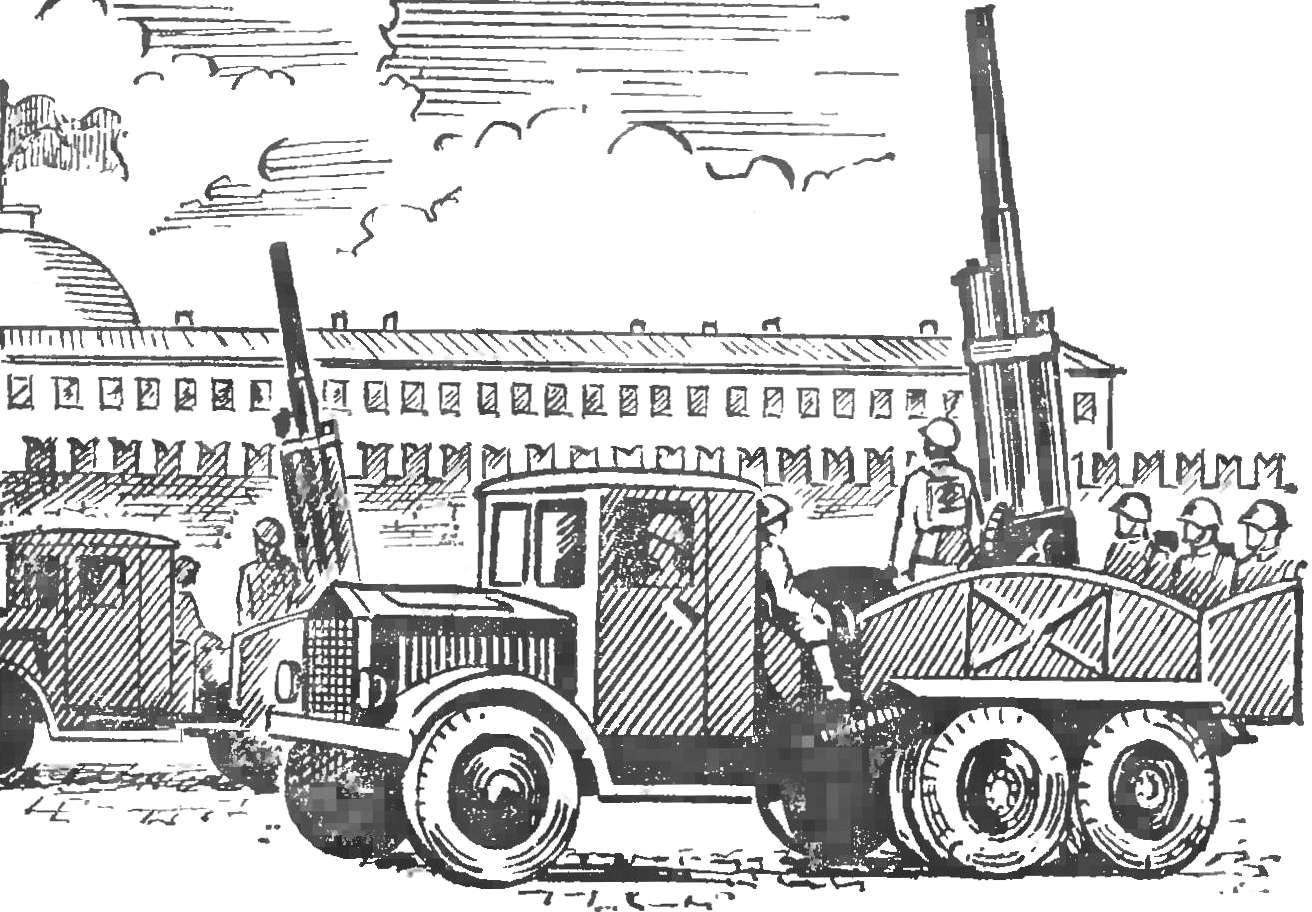 Fig. 3. 76-mm anti-aircraft gun on the car of the YAG-10
But so is “universal” had a gun? As you know, the conditions of firing at air targets quite different than on land. This requires a weapon with high muzzle velocity, high angle of attack vertical and good rate of fire. The gun for ground shooting, particularly the famous “trehdyuymovym”, such qualities are not possessed. There was another drawback: located at a pre-appointed positions, these guns could only protect a stationary defense area. Troops on the March, deprived of cover. Preparation of log homes, manufacturer of swivels, the installation of the guns required a lot of time, and so quick to open fire on suddenly appearing plane or blimp was impossible.
It was recognized that most successfully with the tasks of the support troops on the March can handle artillery on self-propelled mobile chassis. In favor of this conclusion, said the fact that anti-aircraft guns lacked, and speed of maneuver was going to compensate for their numerical disadvantage.
In 1914 in Russia was adopted by the 76-mm anti-aircraft gun, designed by F. F. Lender (Fig. 2) semi-automatic bolt on the chassis of the truck and the Russian-Baltic factory. This self-propelled unit, or as they were called, “avtopushka”, far superior to even more recent foreign samples. The Russian gun was inferior to the American self-propelled anti-aircraft, and the French 75 mm gun model of 1917 . During 1.5—2 min the instrument was operated in the firing position. Initial velocity of the projectile was 588 m/sec. the Whole installation weighed 6,8 t Rate amounted to 20-25 rounds per minute. 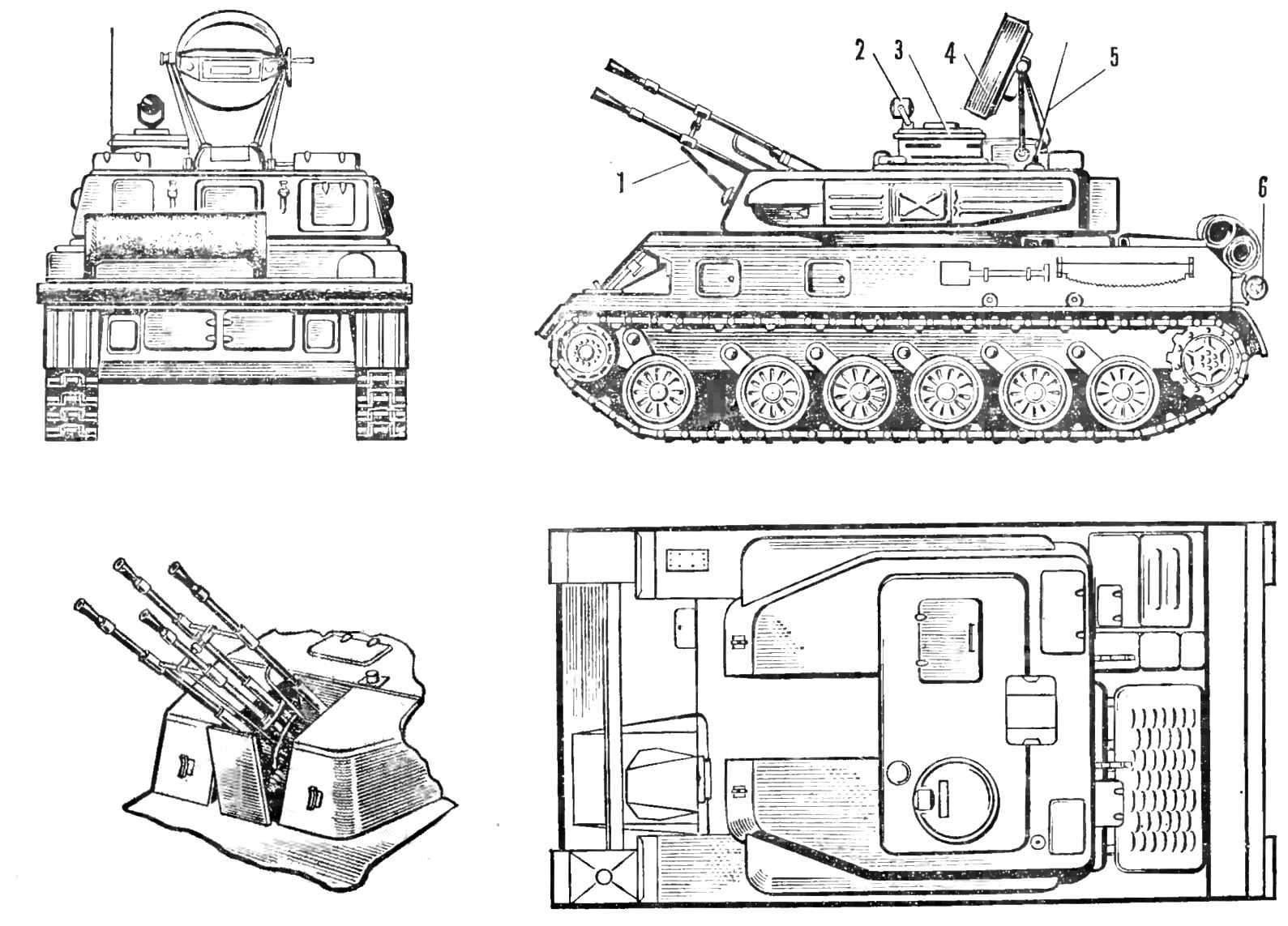 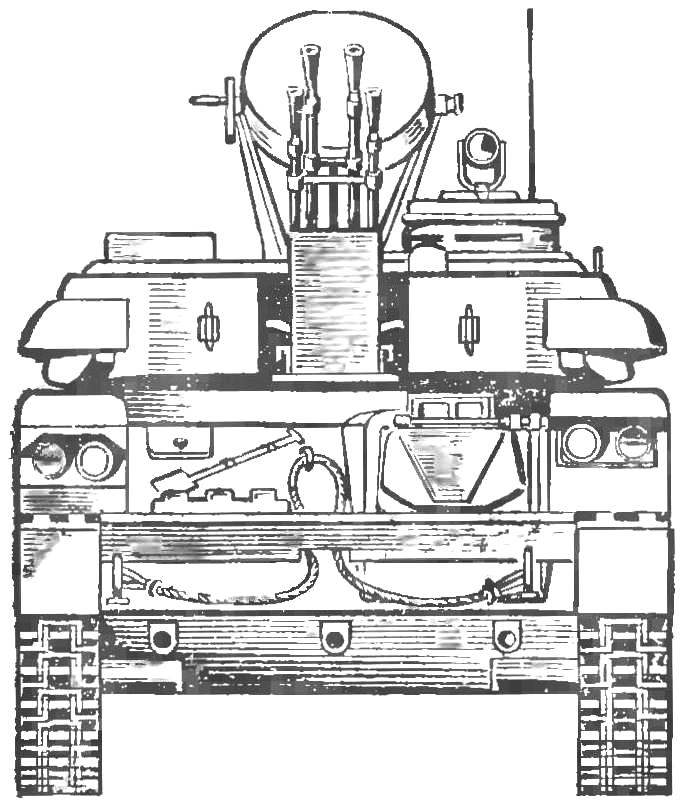 Fig. 4. ZSU-23-4:
1 — stock, 2 — medium, 3 — commander’s tower, 4 radar antenna, 5 — the radio antenna, 6 — log
“With autocannon” was armed with in 1918 year, the Putilov Steel anti-aircraft division. His mobile battery was composed of four guns of the Lender, mounted on trucks with a partially armoured cabin, four trucks with ammunition, three trucks for the team and four motorcycle for communication. Additional armament consisted of four machine guns “Maxim”.
The first report from the Northern front where the division arrived to guard the railroad, entered August 19, 1918. It said that “after two successful queues the aircraft fell on the wing and has sharply decreased in your location”. During the fighting grew the skill of the gunners, and soon the “autocannon” have become a terror for enemy aircraft.
Improved the installation, the designers have increased the patency of the car, making it three axis. So was adopted the 76-mm anti-aircraft guns on the basis of the car YAG-10 (Fig. 3) domestic production. In service with the army during the great Patriotic war were 25-mm automatic gun, model 1940, 37-mm automatic, 76-mm and 85-mm anti-aircraft gun (all samples 1939). The last were struck by planes at altitudes up to 10 500 m and could be towed behind a car at speeds up to 50 km/h.
In 1942 he attempted to create an anti-aircraft gun on tracks. By order of the Artillery Committee, the industry produced a prototype of anti-aircraft self-propelled artillery on the basis of light tanks T-60 and T-70 37-mm automatic cannon (Fig. 5). The unit had good maneuverability, but they were deemed imperfect because of a failed location of the sight, uncomfortable layout of the fighting compartment and some other faults. Later guns used a four-wheeled platform.
The results of the second world war has led to the conclusion that anti-aircraft guns quite effective against aircraft at medium and high altitudes, but the firing of the First low-flying targets with great speed, as in this Case, the planes immediately beyond the limits of the sphere of fire. In addition, the shells 76 and 85 mm guns at low altitude over his own troops is very dangerous. With increasing the survivability of the aircraft decreased and the effectiveness of automatic anti-aircraft guns with a caliber of 25 and 37 mm. the Consumption of shells of small caliber anti-aircraft artillery shot down one plane because of the increased velocity of air targets increased in 1,5—2 times.
Suggests the solution: to create for low-flying targets automatic gun high rate of fire, allowing fire strong squalls during those very short intervals when the aircraft is in the kill zone. The installation needs to quickly change the tip to follow a target that moves with large angular velocities. Most suited to a multilateral setting with more than single-barrel gun, rate of fire.
Modern small-caliber anti-aircraft guns differ from the samples of anti-aircraft artillery world war II increased the rate of fire, accuracy and increased laying rates. If the end of the war the rate of 20 and 40-mm guns reached 80-250 and sometimes only 480 rounds per minute, at the present time, the parameters of the same caliber has increased significantly. Created system of multi-installations: double, triple, and chetvertnykh shesternya. They are mounted on self-propelled chassis with high cross and, as a rule, be reserved. 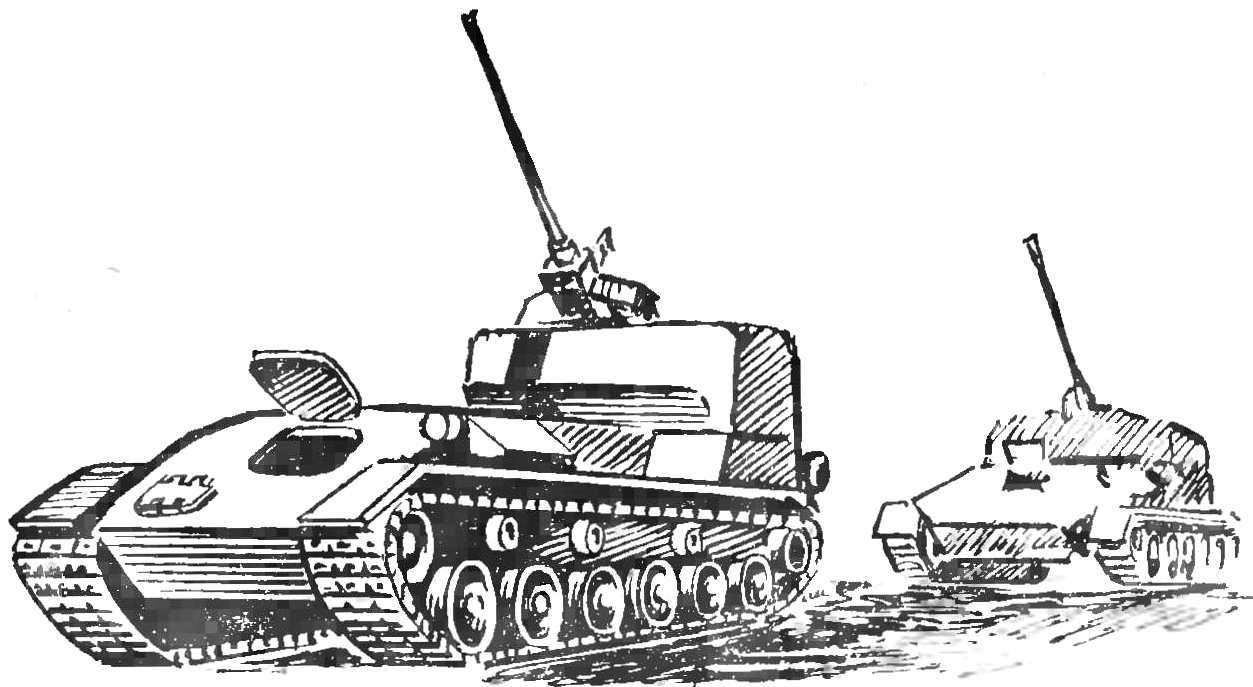 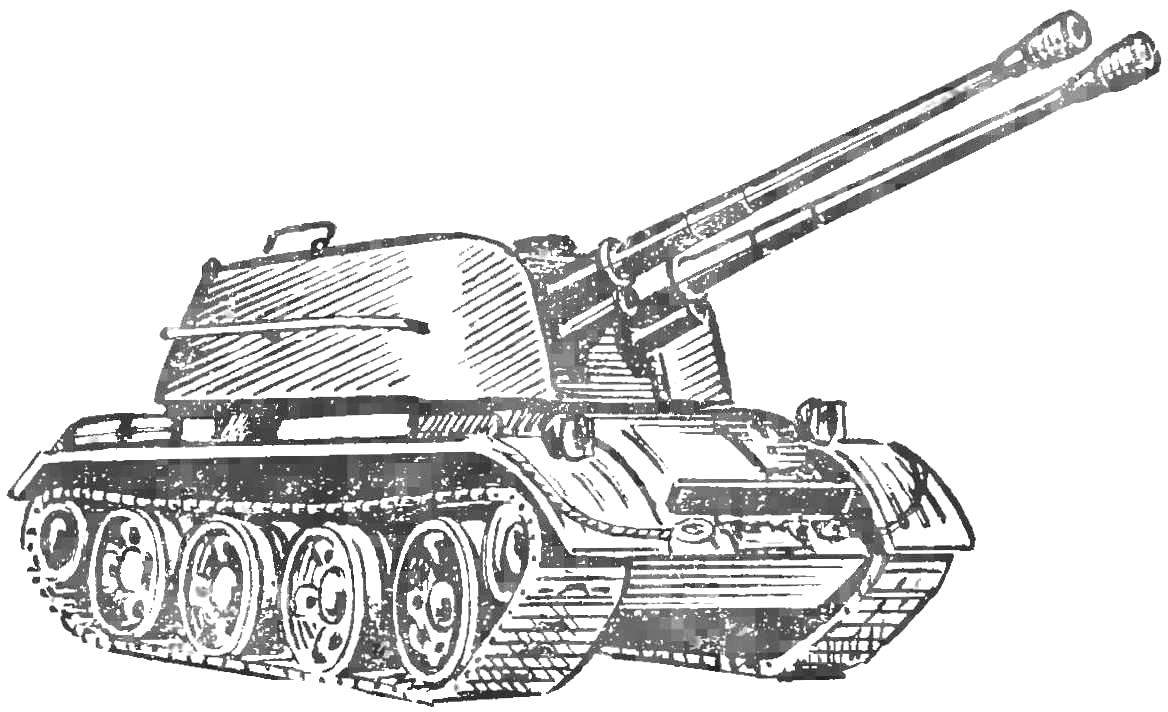 Fig. 6. Self-propelled anti-aircraft gun ZSU-57-2
In the postwar years in the Soviet Army was adopted by the paired 57-mm antiaircraft self-propelled installation ZSU-57-2 (Fig. 6), is designed to protect tanks from air attacks. The base became the components and mechanisms of a medium tank T-54. This car had a fully armored body, the moveable cabin and the same high permeability, as well as tanks. All operations of recharge and production shots (opening the breech, feed the next cartridge in line dozynki, the ejection of the cartridge case from the extractor piston stopper, sending a cartridge into the chamber, closing the shutter and a descent drummer) are made automatically due to the energy and roll-back of powder gases.
The next step in the creation of small-caliber self-propelled anti-aircraft guns became anti-aircraft Quad ZSU-23-4 (Fig. 4). It is able to conduct effective fire on air targets, moving in combat formations of troops. Its task is to protect objects, combat formations and columns on the March from airplanes and helicopters flying at altitudes up to 1500 m.
Mounting base is 23-mm automatic anti-aircraft gun. Its four barrel in a rotating turret provide a high rate of fire. All systems ZSU mounted on a tracked armored vehicle provides high mobility and passability on terrain self-Propelled unit equipped with instrumentation that allows the commander and the driver to navigate the terrain and plot a course on the map.
As the power plant used diesel engine. The units power supply and generators — AC and DC.
The ZSU-23-4 is distinguished by high accuracy in any weather and at any time of the day. This allows you to effectively combat enemy aircraft and to reliably cover the troops in all kinds of hostilities.
RECOMMENDATIONS FOR THE MODEL CONSTRUCTION.
The case is a protective color. Crawler tracks — black or “metal”. Rollers have rubber tires that can be simulated with black paint. Handle saws and shovels — the color of the wood. The tools themselves are black. Lights and illuminators — black. The tower of white paint is applied to a three-digit number and identification mark.
To avoid the execution of small parts of weapons, guns in the lower part can be closed with a shield of dark color.
A. BESKURNIKOV