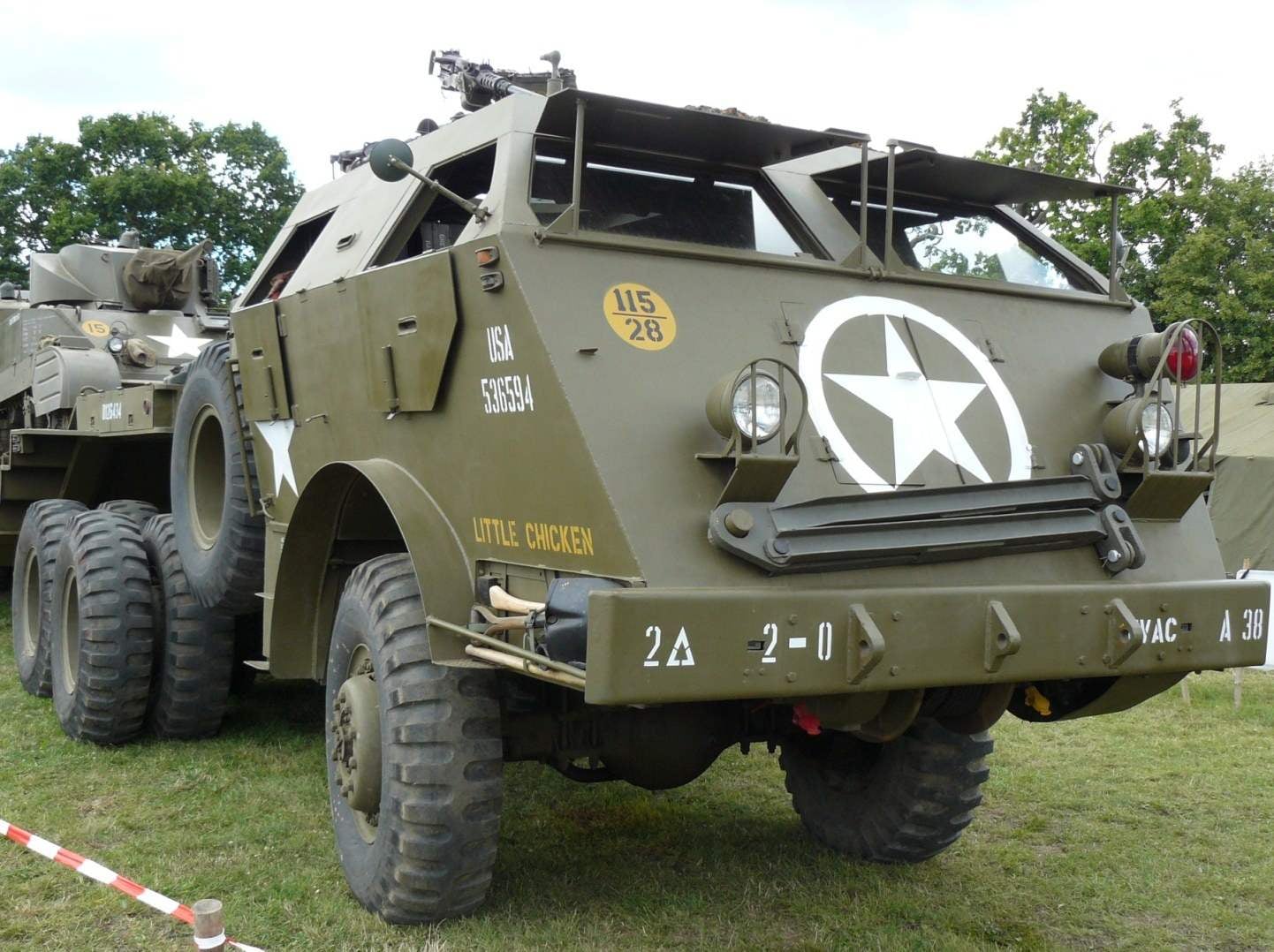 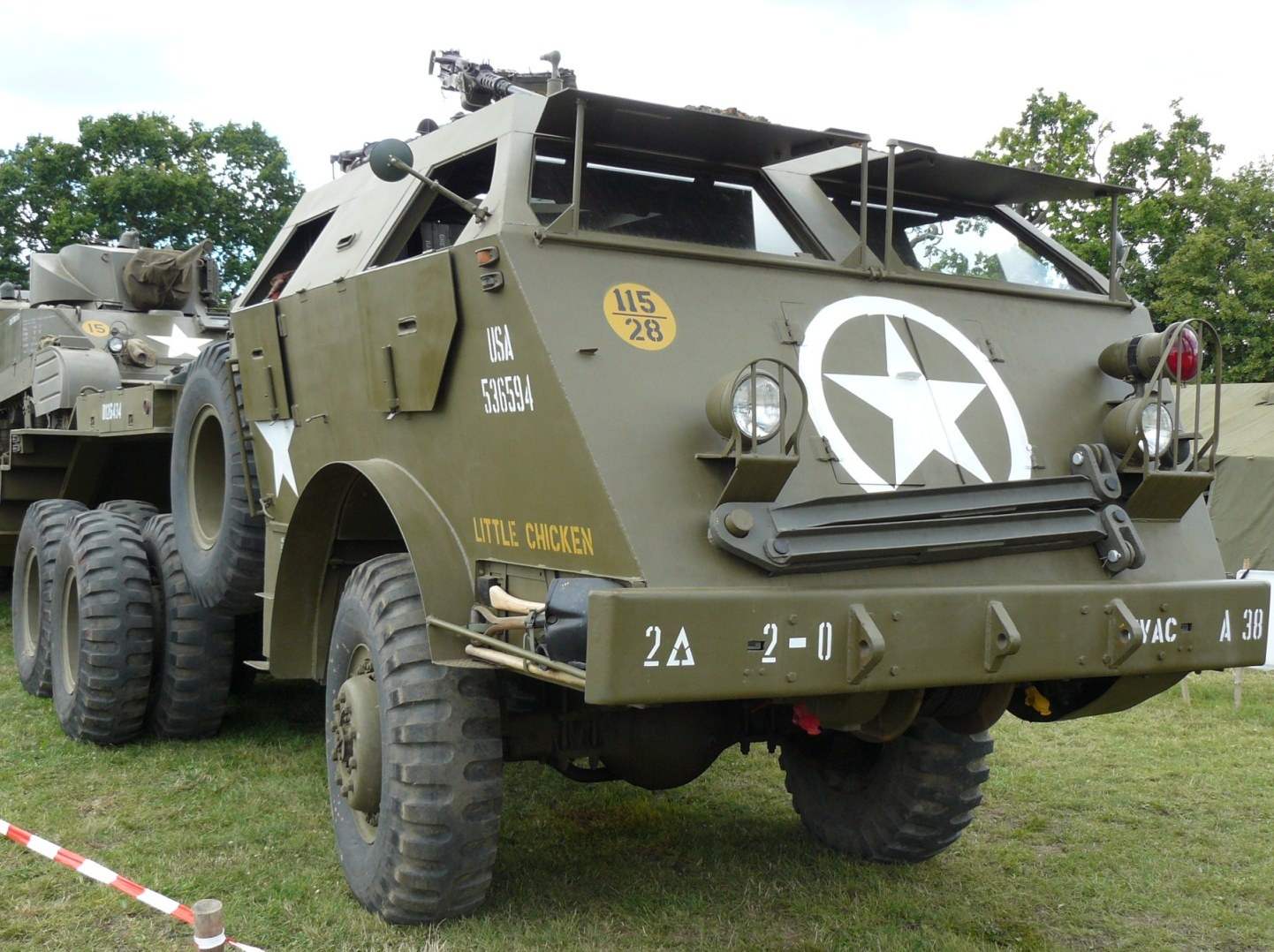 The idea of transporting tanks by road transport arose during the First world war. It was the desire to make a real operational maneuvering tank units — that is, to make a quick transfer tanks from one front to another. To accomplish this movement on their own was excluded — was too low, the dynamic characteristics of combat vehicles in those years. But a suitable vehicle was not there.
In the postwar period, with the improvement of designs of cars, this idea was embodied.
Methods of transportation were different. To transport the Italian Fiat 3000 light tanks, for example, used a special four-wheel single-axle trailers developed by the artillery Arsenal of Turin. In Germany in the 1930-ies for transportation of light tanks Pz.l and Pz.ll has developed several models of heavy trucks carrying 8800 — 9500 kg. the Most popular were Bussing-NAG 900 and 900А and Faun L900D567; the tanks were transported directly to the bodies of these machines. In the Wehrmacht was a special trailer Sd.Anh.115 capacity 8000 kg. the Latter have been used for transporting medium tanks. As draft power for these trailers used heavy wheeled tractor Hanomag SS100-type or half-track 18-ton crane Sd.Kfz.9 Famo of the company (although the Pz.l, for example, quietly towed even eight – and five-ton trucks).
In service with the British army in 1920 and 1930-ies was the Scammell transporters, which transports the medium tank Mk.ll. At the end of the 1930-ies they were replaced by more powerful conveyors of the same brand, equipped with semi-trailer payload capacity of 20 tonnes and tractors Albion with a 15-ton semi-trailers.
However, the most massive tank transporters in the armies of the Western allies during the Second world war were American ballast tractors 28XS Reo and Diamond Т980 equipped with three-axle trailers trailers.
Both of these machines were supplied to the Soviet Union, albeit in very limited quantities, because the military regulations of the red Army did not provide for the delivery of tanks to the front line by road. Therefore, the American trucks were used mainly for the evacuation of damaged armored vehicles. The use of a trailer company Roger Trailer with a lifting capacity of 45 tons was allowed to carry all types of tanks as the red Army and other allied armies.
The main drawback of these machines preclude their use in the front line close to anterior margin, there was a complete lack of booking. Therefore, in 1941, in the United States, then still based exclusively on the British experience of fighting in North Africa, has commenced designing an armored tractor-Transporter. Once the military was formulated tactical and technical requirements, the work began a few manufacturers of heavy trucks.
First in January 1942 suggested firm Dart Motor Company of Kansas city: tractor KZT13, paired with a T28 trailer Fruehauf Trailer company. Later, in April, another competitor — firm Knuckey Truck Company of San Francisco presented its project tractor T25, also in the block with the trailer T28. 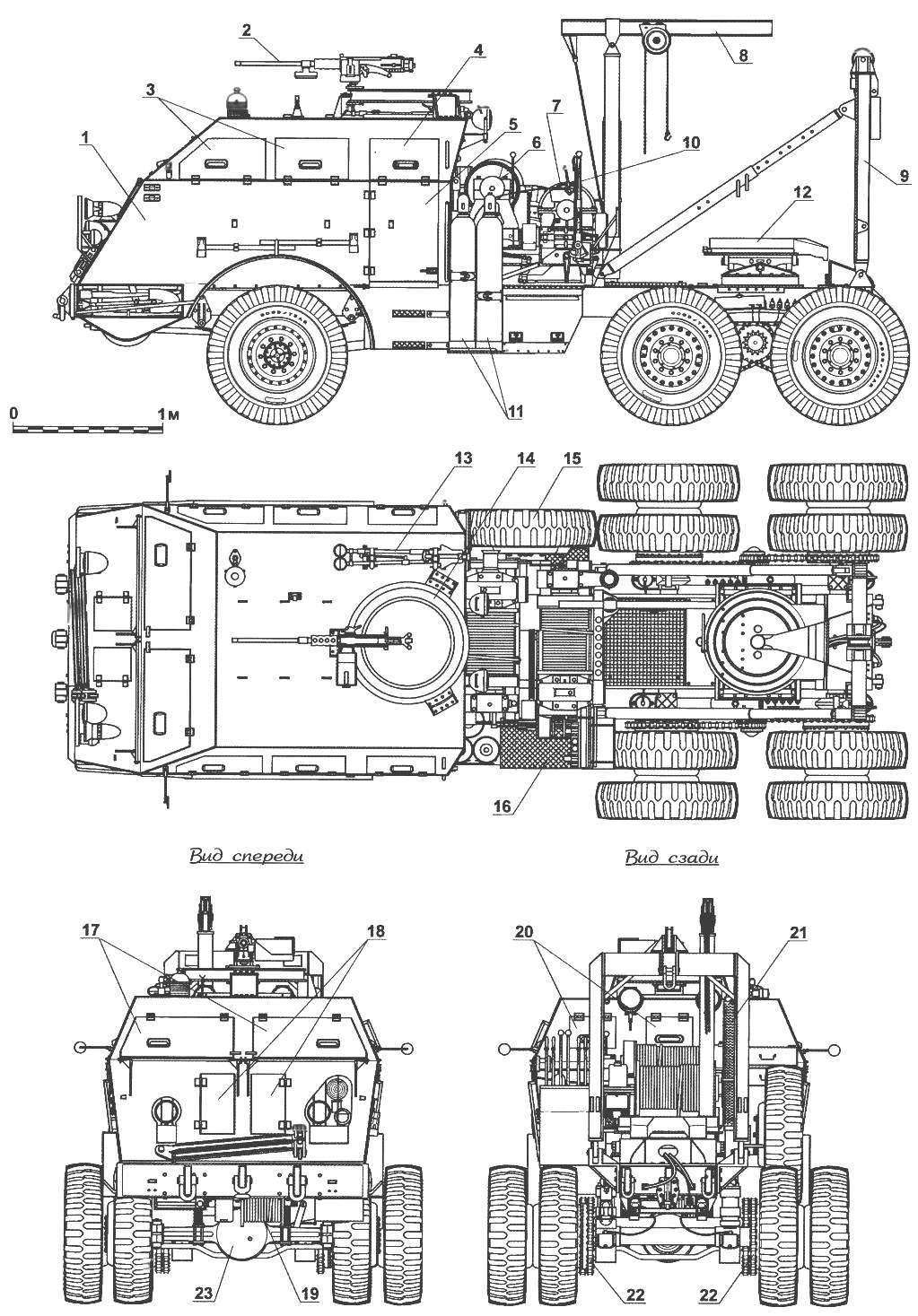 Tractor M26:
1 — armoured cab; 2 — heavy machine gun Browning М2НВ; 3 — a folding armored shields for the side Windows; 4 — folding broneschitok door; 5 — door; 6 — the top winch; 7 — lower the winch; 8 — the crane-a beam; 9 — crane-boom; 10 — the levers of the winch; 11 — oxygen cylinders and acetylene; 12 — saddle; 13 — tripod heavy machine gun; 14 — turret; 15 spare tire; 16 — site of the operator; 17 — folding pokryshki wind Windows; 18 — pokryshki radiator; 19 — front winch; 20 — pokryshki stern Windows; 21 — silencer; 22 — chain transmission rear axles; 23 — front drive axle
Both cars, or as they were called officially, Tank Recovery Unit T3 (which can be translated into Russian as “complex to evacuate the tanks”), have received extensive testing program, during which revealed numerous shortcomings. Most of them in terms of agility and mobility. Mostly this was due to the overloading of the chassis and not powerful engines. However, by the end of the tests revealed the superiority of the tractor T25 on T13, primarily due to better overall layout. The important role played by the application on T25 simple and reliable dual-chain transmission in the drive system the rear wheels. In short, the competition was won by firm Knuckey Truck Co, but to ensure serial production of his car she could not. Its production capacity is not up to the needs of the us army. The prototype and technical documentation handed over to the firm Pacific Car and Foundry Company from Washington. After completion of the project to the serial production the car has received factory index TR-1.
The US army, the complex was adopted under the designation of Truck-Trailer, 40-ton, tank recovery, M25, which can be translated into the Russian language as a “40-ton truck tank Transporter M25”. The complex included a Truck, 12-ton, 6×6, tractor M26 (“12-t truck tractor, M26 6×6”) and Semitrailer, transporter, 40-ton, 8-wheel, M15 (for 40-ton eight-wheel semi-trailer-Transporter M15). Unlike those bulky official designations, the nickname of the tractor was much easier — Dragon Wagon. Literally in Russian-“dragon-machine” or “machine dragon”. Meaning that English name appears to be most closely our “beast-machine”.
Tractor “Dragon” was produced in two versions with an armored cab (M26) since 1943, and with unarmoured cabin (М26А1 ) from 1944. Both options were equipped with 6-cylinder petrol engines Hall-Scott L440 1090 with direct injection. Engine output was 240 HP at 2100 rpm In the car’s transmission was part of a four-speed gearbox, three-speed auxiliary gearbox and transfer box.
The braking system of the trailer connected to the brake system of the tractor. Thus rear axles of the latter and the wheels of the trailer were equipped with air brakes.
Armored cabin of the M26 tractor was welded from flat sheets, located under rational angles, and is equipped with two doors for boarding crew and eight Windows. Latest in a fighting position closed the armoured covers with inspection holes. On the cab roof on the turret mounted 12.7-mm machine gun Browning М2НВ. 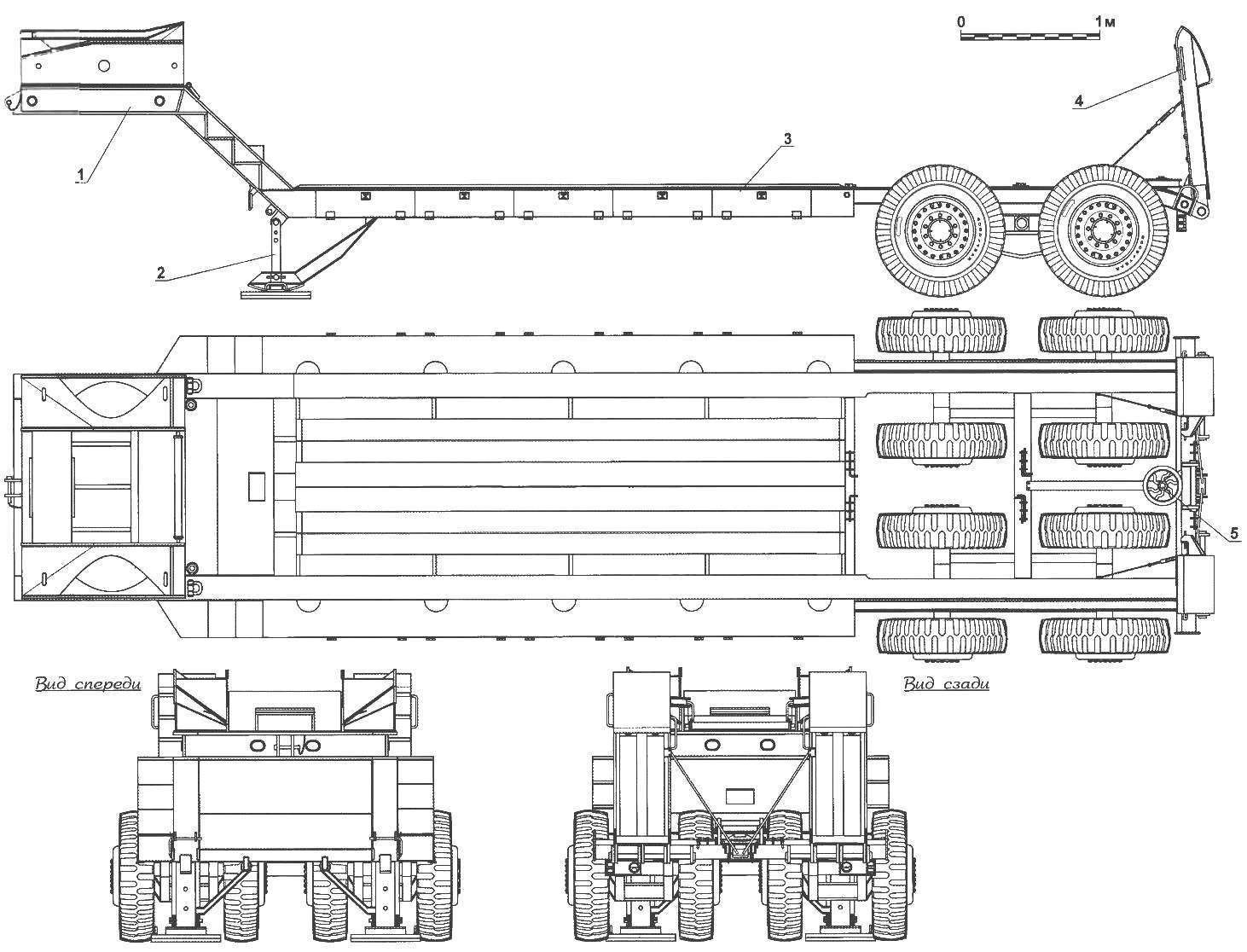 Semi-trailer-Transporter M15:
1 — frame coupling; 2 — folding prop; 3 platform; 4 — rail; 5 — a pulley for the issuance of winch cable
The truck was equipped with double-drum winch mounted behind the cab, and winch self-recovery winch under the bumper. In addition, the equipment included a portable Davit and crane-boom, and a device for towing tanks and vehicles on a rigid hitch.
In the period from 1943 to 1945 the factory shop company Pacific Car and Foundry left 1372 “Dragon.” Powerful tractor is widely used for transportation and evacuation light and medium tanks, as well as to transport other heavy loads. The staff of the armored division of the US army consisted of remotemachine battalion, numbering in its composition of nine tank transporters M25.
After the Second world war most of these cars remained in Europe, where it was used in the American occupation forces in Germany and in the allied armies. Long enough operated these machines in the French parts. The United States used a number of “dragons” in Korea, and in the IDF they served until the early 1970-ies. However, the service of these machines was essentially completed in the mid-1950s, after the appearance of more heavy tanks.
But trayler M15, which was easier to upgrade, operated much longer. Already in 1944, it has undergone changes in terms of size, equipment and capacity. The trailer received index М15А1 withstand the load up to 45 tons and could transport the latest American heavy tank M26 “Pershing”. After the Second world war a number of upgrades have led to the emergence of М15А2 trailer, which is paired with a 10-t truck М123 company Mack was used by the US army in the Vietnam war.
M. BARYATINSKY, O. BARONS