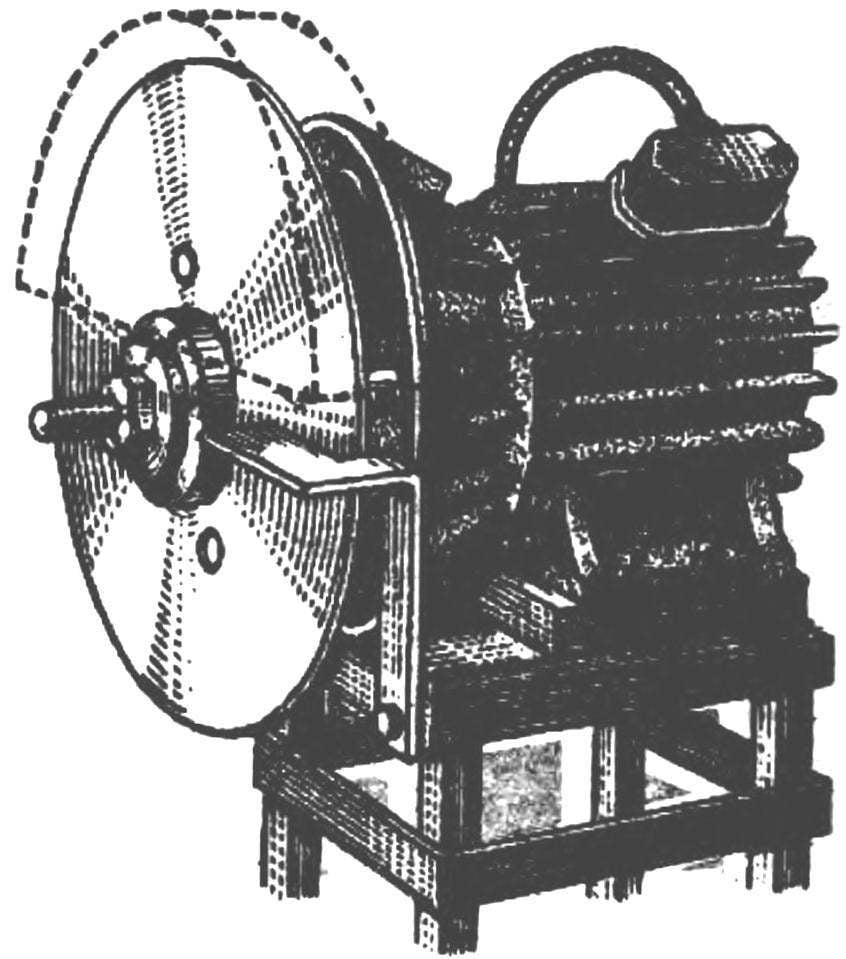 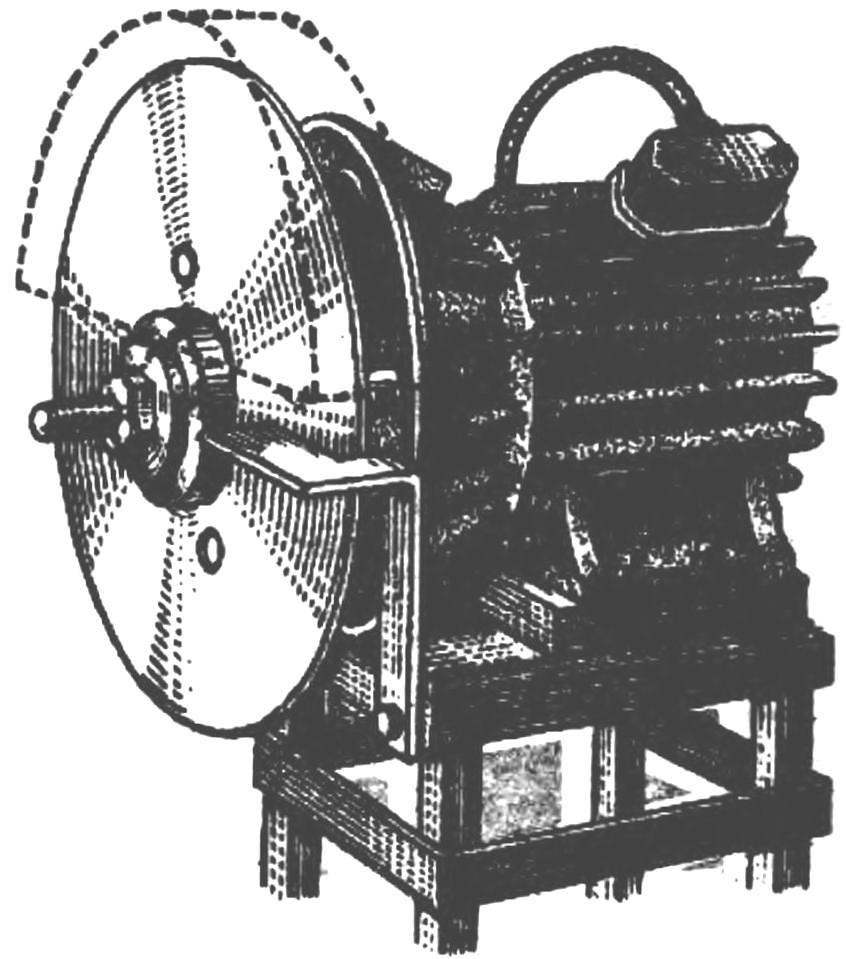 Many probably had to watch as the metal is heated during processing it on an emery wheel. The phenomenon is harmful: heating “releases” hardened metal. Is it possible to turn it to their advantage? Well, for example, to cut metal? For the experimental verification of the idea took only an hour and a half I’ve ground off the teeth from an old circular saw blade and secured the tool (smooth disc) is grinding in elektrotochilo.
Pressed “start” button, the disc began to spin. I brought to him the steel area. Here he touched the disk, there was a creaking, screeching, after a few seconds the billet in contact with the disk is warmed up, there appeared a luminous dark red dot, she brightened, turned into orange, and then I felt that the disk cuts into the metal. Passed the first millimeter of a second,… fifth Nagging! Saws absolutely smooth drive! Sound bounced off-cuts, I stopped the motor. I wonder how much hot drive? Touched it hand: the drive was a little warm, well, except a little warmer than the air in the room.
And what if to try to cut other materials? In the course went all that was at hand: aluminum and glass, ebony and Micarta, wood, and tucked a piece of file — everything was subservient to my drive. Particularly interesting were cut glass: it is quickly heated at the point of contact red-hot, melted, and only then cut. Same hardened steel (piece of file!) cut hard enough, and as for the aluminum, handle it this way was easy and simple.
After finishing the experiments, I tried to make sense of the phenomenon. What is my tool? Yes, obviously, the same circular saw, but with a huge number of vanishingly small teeth. True, it works a little differently: his main task is to heat the metal at the contact point, to thereby bring it up to a plastic state and extrude poluraspredelenia “dough” of the cut groove.
Interestingly, while working the disc diameter is not reduced; it would seem that he needs to grind, this seems to be happening actually, but at the same time there is a reverse process — the sticking of molten metal to a working tool under certain cutting diameter starts to increase.
A little bit about the design of the machine with the blade and its use. Disk is the easiest to form, securing the saw in place of the emery stone and (when the motor winepress) carefully close to the teeth of the coarse block. 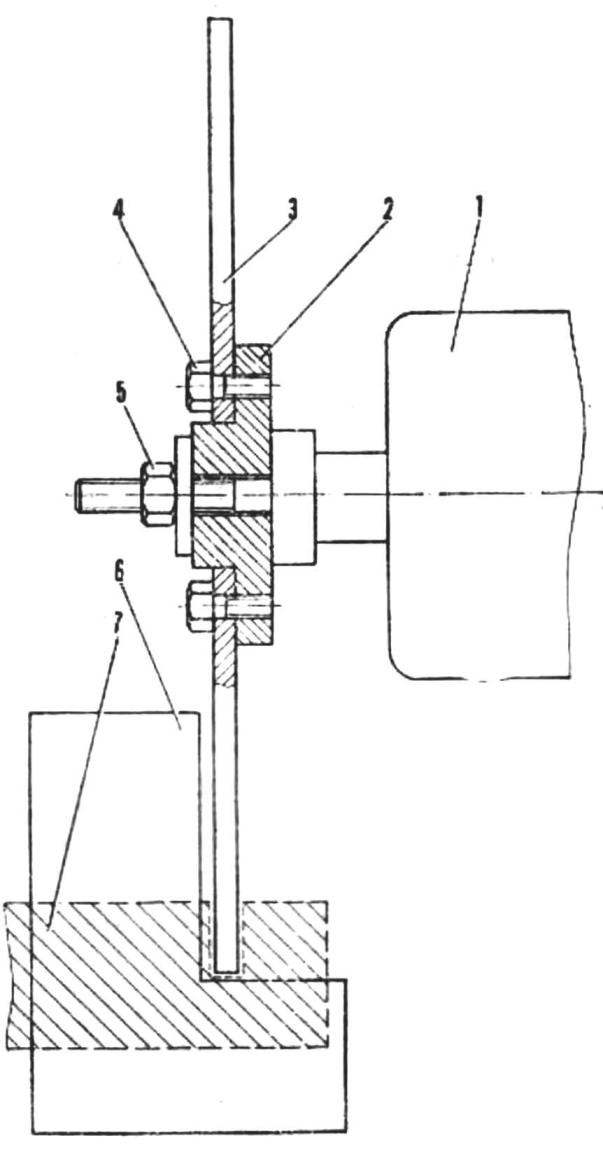 The scheme of fastening the blade to the motor:
1 — motor 2 — mounting flange 3 — blade, 4 — screw 5 — nut, 6 — armrest, 7 — cut material.
You should pay attention to the radial runout of the disk: try to they were minimal, otherwise the cutting is significantly complicated. This is especially noticeable when cutting glass, which with cracks. The axial runout also contribute to a more clean cutting: the fact that they perform the role of divorced of teeth in a circular saw. I tried to fix the disk and the Chuck of the lathe, it worked the same as the winepress.
Generally speaking, the efficiency of the cutting disc increases with increasing peripheral speed. Unfortunately, circumstances did not allow me to check it out with a high-revving engine. But, apparently, this should increase the cutting speed and increase surface finish.
The disadvantages include a comparatively large force (especially in the first moment when the metal is still not warmed) of the workpiece to the drive, however, as the warm metal it is reduced several times.
It’s a shame that it was not possible to experiment with disks made of different materials; obviously, the results will substantially depend on the coefficient of friction pair “detail tool”, and by the thermal conductivity of the disc and the material being cut. I hope that the readers of “M-K” interested in this method of processing and will pick up other materials, allowing to cut metal friction with great effect.
O. LAVROV, the student GPTU № 36 g. Jugs, Kalininskaya.