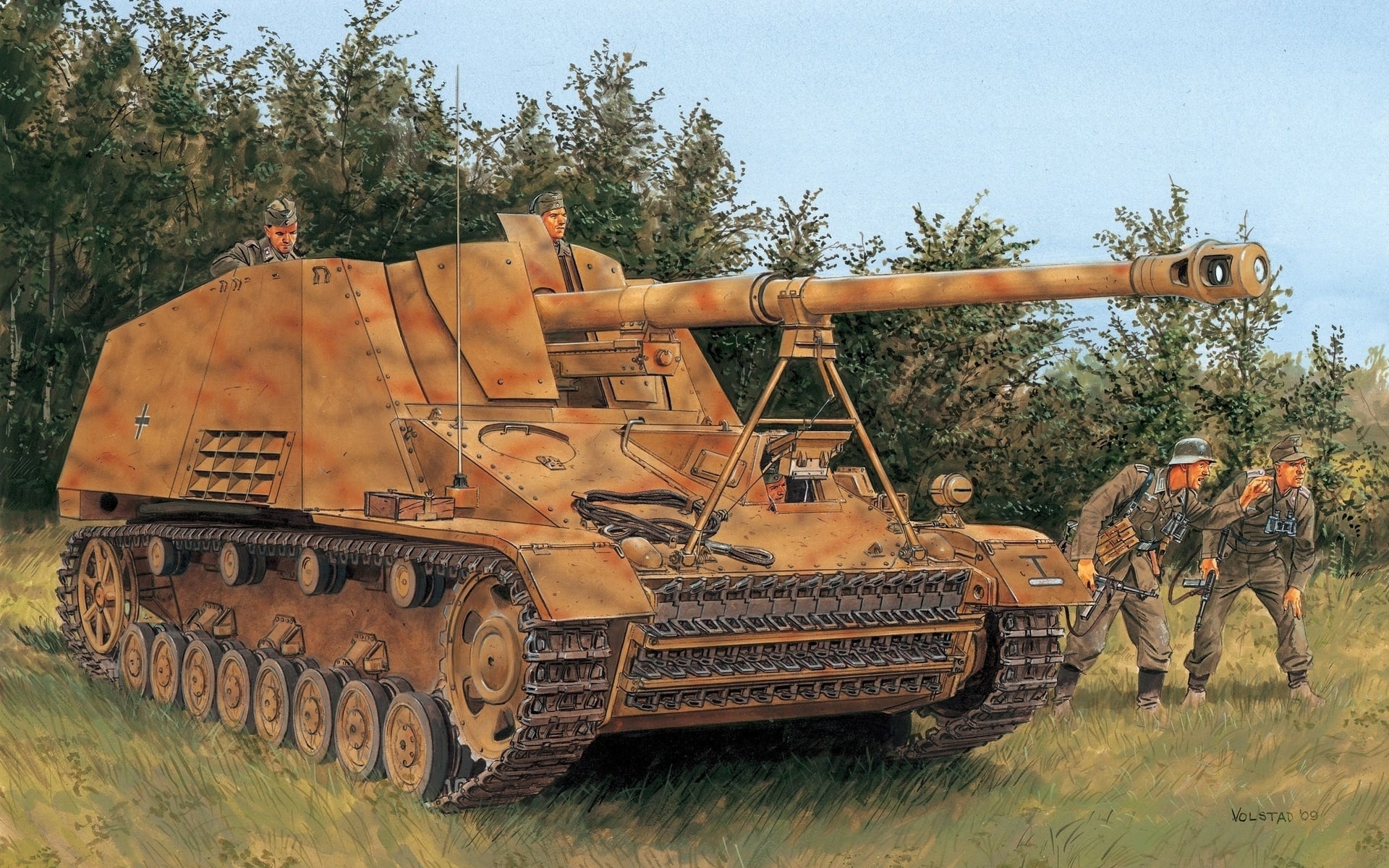 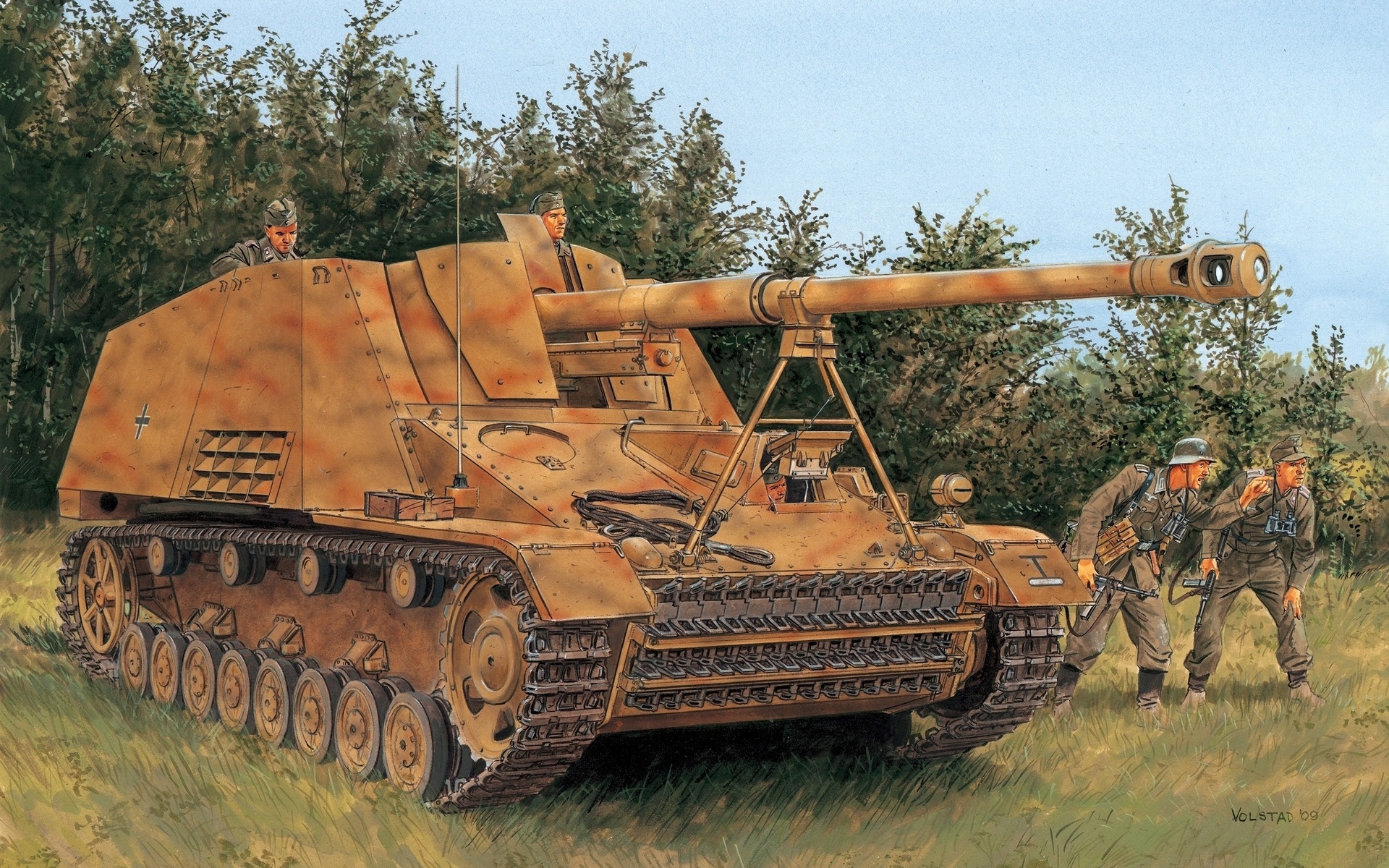 As we know, Germany in the beginning of the Second world war there were two types of medium tanks: Pz.HI and Pz.IV. Both cars were created in the mid 1930-ies very close to the reference, which led to the creation of two almost identical in weight, size and booking, but differing in armament and in the end — a completely different construction machines. It is difficult to give an explanation. For example, a base weight was 15 and 18 t, respectively. Significant differences were only armed with one machine had to carry a 37-mm, and the other 75-mm gun. Where it would be logical to take one tank, with two arms, as done, for example, in the UK and partly in the USSR. In any case, such a decision would entail much less costs in the future.

By mid-1941 the Germans fully realized the mistake. The question of removing the Pz.III production had not yet been set, but September 6, 1941, Hitler had already been submitted a report which substantiated the benefits of “Association” Pz.III and Pz.IV. The case was given course, and several firms were instructed to study different variants of Panzerkampfwagen III und IV n.A (n.And — neue Austfuhrung — new design).
Krupp has manufactured two prototypes, representing the Pz.lll with a new chassis, was intended for Pz.III/IV. Track rollers are located in a staggered manner, the suspension was torsion. Both cars for quite a long time was tested at various ranges, during which were worked out and other options of the suspension and chassis.
Design and testing resulted in early 1942 to the creation of a unified chassis Geschützwagen III/IV, which track rollers, suspension, carrier rollers, napravami wheels and tracks were borrowed from the tank Pz.IV Ausf.F and drive wheels, the engine and gearbox — Pz.III Ausf.J. But the idea of “one” tank was never carried out. This project was buried in March 1942, after the Pz.IV Ausf mounted 75-mm cannon with a barrel length of 43 caliber, suddenly and without the hassle of turning the tank support in the universal.
Designed by the same chassis found suitable: he decided to use for placement of the 150 mm heavy field howitzer sFH18.
The Berlin firm Alkett, who designed this machine, proposed to shift the engine in the Central part of the chassis, identifying him immediately for the Department of management. This arrangement gave the opportunity to mount aft the conning tower with a massive artillery system.
Changes in the location of the engine is demanded to develop new driveline and redesign the cooling system. In addition, the body chassis was slightly lengthened aft it is easy to see by the increased distance between the last supporting roller and guide wheel.
In July 1942, a decision was taken to production by may 1943 200 chassis Geschutzwagen III/IV, armed with 150-mm howitzer. However, in October 1942, Hitler was shown a model of self-propelled anti-tank 88 mm guns, which used the same chassis. Resulting from production plans had to be adjusted — now to may 12, 1943, was ordered to produce 100 units of self-propelled guns of both types. 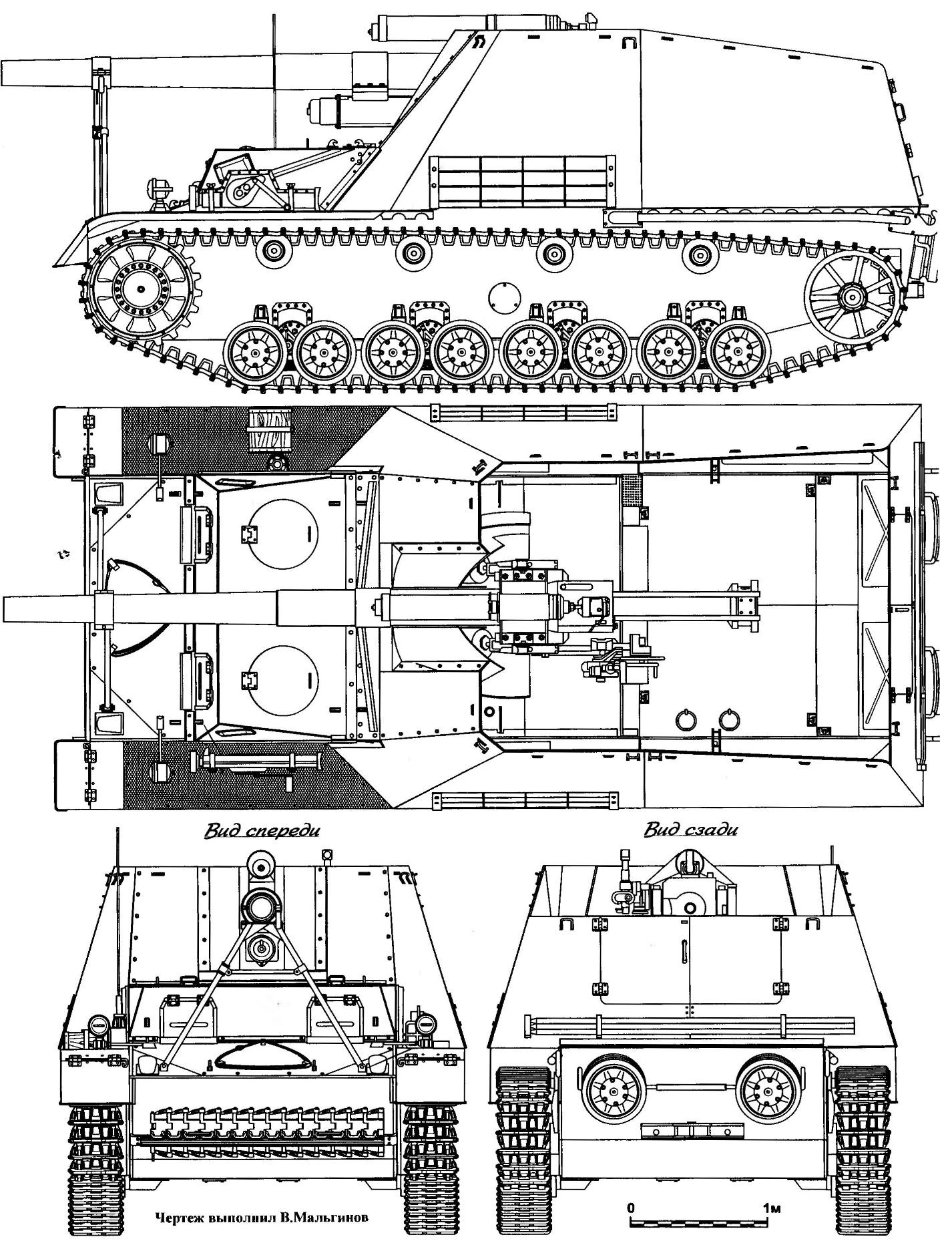 SPG Hummel
Final Assembly of the 150-mm self-propelled howitzers was carried out by Deutsche Eisenwerke in Duisburg. Armor cuttings were obtained from the Deutsche Rohrenwerke plant in mülheim. It should be noted that the prototype, built on the firm Alkett, and was based on the linear re-designed chassis of the tank Pz.IV, not on the Geschützwagen III/IV, and the howitzer barrel had a massive muzzle brake, which was absent on serial machines. There were produced 724 self-propelled guns, which by Hitler’s order of 27 February 1944, received the name Hummel (“bumblebee”).
Case self-propelled howitzers (Actually chassis Geschützwagen III/IV) were welded from rolled armor plates with a thickness of 30 mm (frontal hull), 20 mm (Board and feed) and 15 mm (roof and bottom). In the Central and stern parts of the hull with bolts and welding is attached to the open top and partially behind combat tower with a wall thickness of 10 mm In the aft wall of the deckhouse there were double-leaf armoured door, intended for planting gun crew and ammunition load.
In the conning tower, self-propelled guns “Hummel” was set swinging portion and the upper machine heavy field howitzer 15 cm SFH 18 150 mm caliber (actually — 149,1 mm). The length of the barrel of the howitzer was 29.6 caliber. Horizontal aiming angles were 15° on the side of the vertical ranged from – 3° to +42°. Ammunition consisted of 18 rounds of separate loading ammunition with high-explosive and heat shells. Cumulative shell Gr 39Н1/A mass of 25 kg and an initial velocity of 465 m/s punched a 160-mm armor. Additional armament consisted of machine gun 34, which could be installed on anti-aircraft machine.
In the power compartment self-propelled howitzers was located 12-cylinder V-shaped petrol engine Maybach HL 120TRM 300 HP at 3000 Rev/min. It had a liquid cooling system. Two radiators located on the sides of the hull, behind the engine.
The cooling system had a device that allowed you to connect it to a similar system for another machine. This was particularly important in the harsh winter conditions of the Eastern front: the heated coolant of the engine of one of the ACS facilitated the start of the engine to another.
Torque from the engine transmitted to the planetary six-speed (6+1) transmission type Zahnradfabrik SGG 77 using the three-disk main friction clutch Fichtel & Sachs. The second and sixth transmission KP had synchronizers. Planetary rotation mechanism provided “Homely” good maneuverability.
With a weight of 23.5 tons, SAU has a top road speed of 40 km/h cruising range at movement on highway was 250 km, cross-country 160 km from the Crew of “Hummel” consisted of 6-7 people. 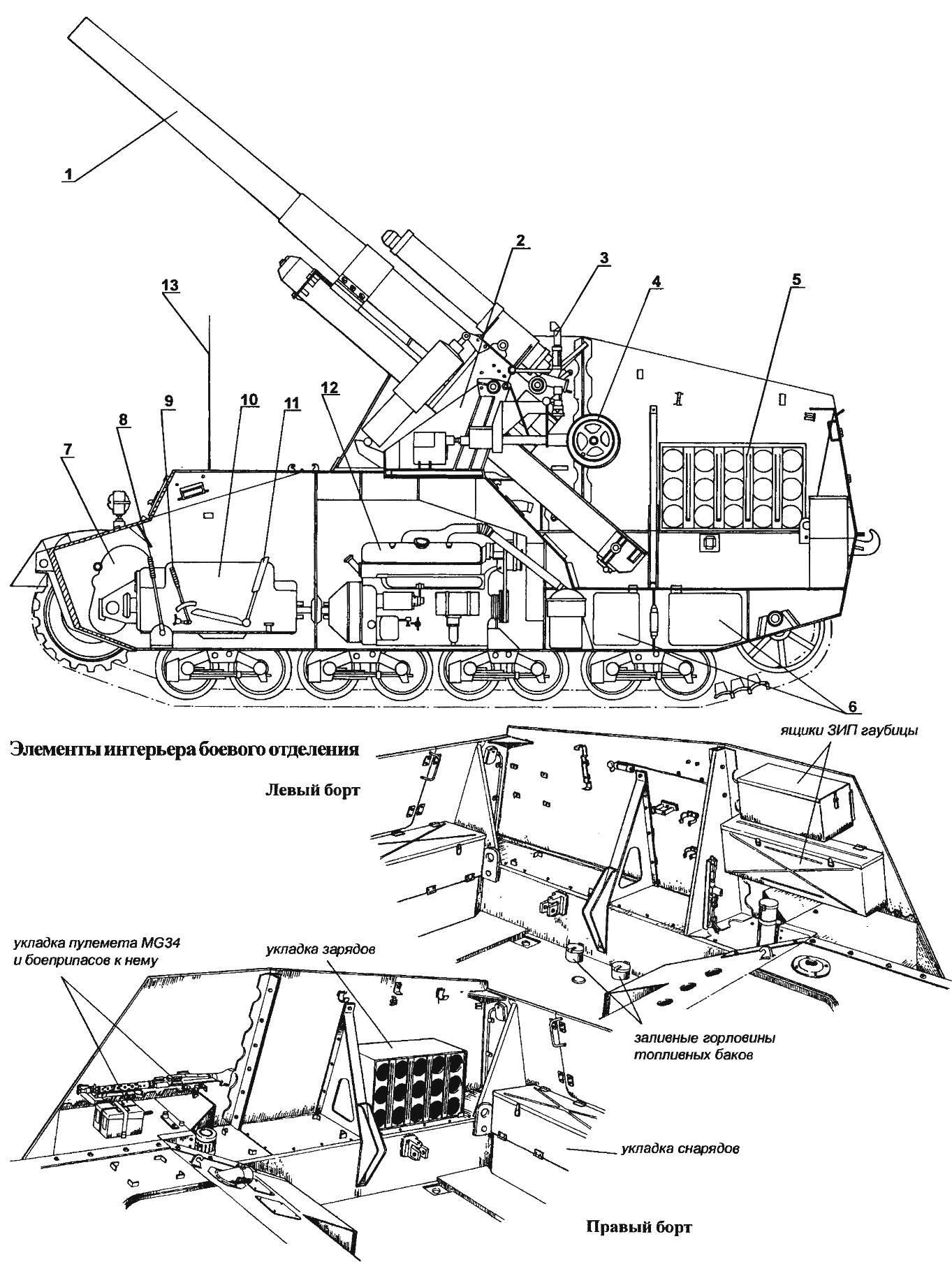 The layout of self-propelled guns “Hummel”:
1, the swinging part of the 150-mm howitzer; 2 — press; 3 — panoramic sight; 4 — handwheel vertical clamp; 5 — laying of 150 mm of charges; 6 — fuel tanks; 7 — final drive; 8 — lever; 9 — the lever of a gear change; 10— transmission; 11 — the seat of the driver; 12 — motor; 13 — antenna
In the production process, in the design of self-propelled howitzers were made numerous small changes. For example, machines of the early releases had a small armored pilothouse just above the place of the driver. The radio operator of the working place which was to the right of the driver, were round boarding hatch in the top of the inclined plate. On machines later releases, these two members of the crew have got a common cabin in full beam with two boarding hatches and two observation Windows, zakryvayushiesya armor covers.
Because of the small ammunition capacity ammunition it was decided to develop for the “Humala” special ammunition carrier. Apparently this machine was different from the ACS only on the lack of guns. His loophole was closed with a 10-mm armor plate. In all there were 157 carriers.
Self-propelled howitzer “Hummel” was adopted for service with the battalions of self-propelled artillery in the artillery tank regiments and some motorized divisions of the Wehrmacht and the Waffen SS. Two batteries of self-propelled battalion was armed with 105-mm self-propelled howitzers “Vespa”, one 150-mm self-propelled howitzer “Hummel”. Usually in the battery, there were four self-propelled guns, rarely, their number has reached six. The appointment of self-propelled guns “Hummel” was no different from the 150-mm field howitzer artillery regiments of infantry divisions. However, in a self-propelled version of these guns could be much more effective to guide and support fire the highly mobile tank and motorized formations.
Baptism of fire “of Humala” took place during operation Citadel in summer 1943. Later they were used on all fronts until the end of hostilities in Europe. As of 10 April 1945 the German army was still 168 self-propelled guns “Hummel”.
Mention should be made about two types of self-propelled howitzers, created on the same “gun chassis” Geschützwagen III/IV.
In 1942, Krupp-Gruson developed a design of self-propelled guns with accommodation in a rotating open top turret with a 105 mm light field howitzer leFH 18/1 with a barrel length of 28 calibers. Armor protection ranged from 10mm (feed housing) up to 30 mm (gun mantlet, the forehead hull and turret). The turret howitzer vertical ranged from 0° to +68°. On production machines was planned to install 105-mm field howitzer leFH 43.
In this embodiment, the chassis was equipped with 12-cylinder inline air-cooled engine Maybach HL 90 with a capacity of 360 HP at 2800 rpm. 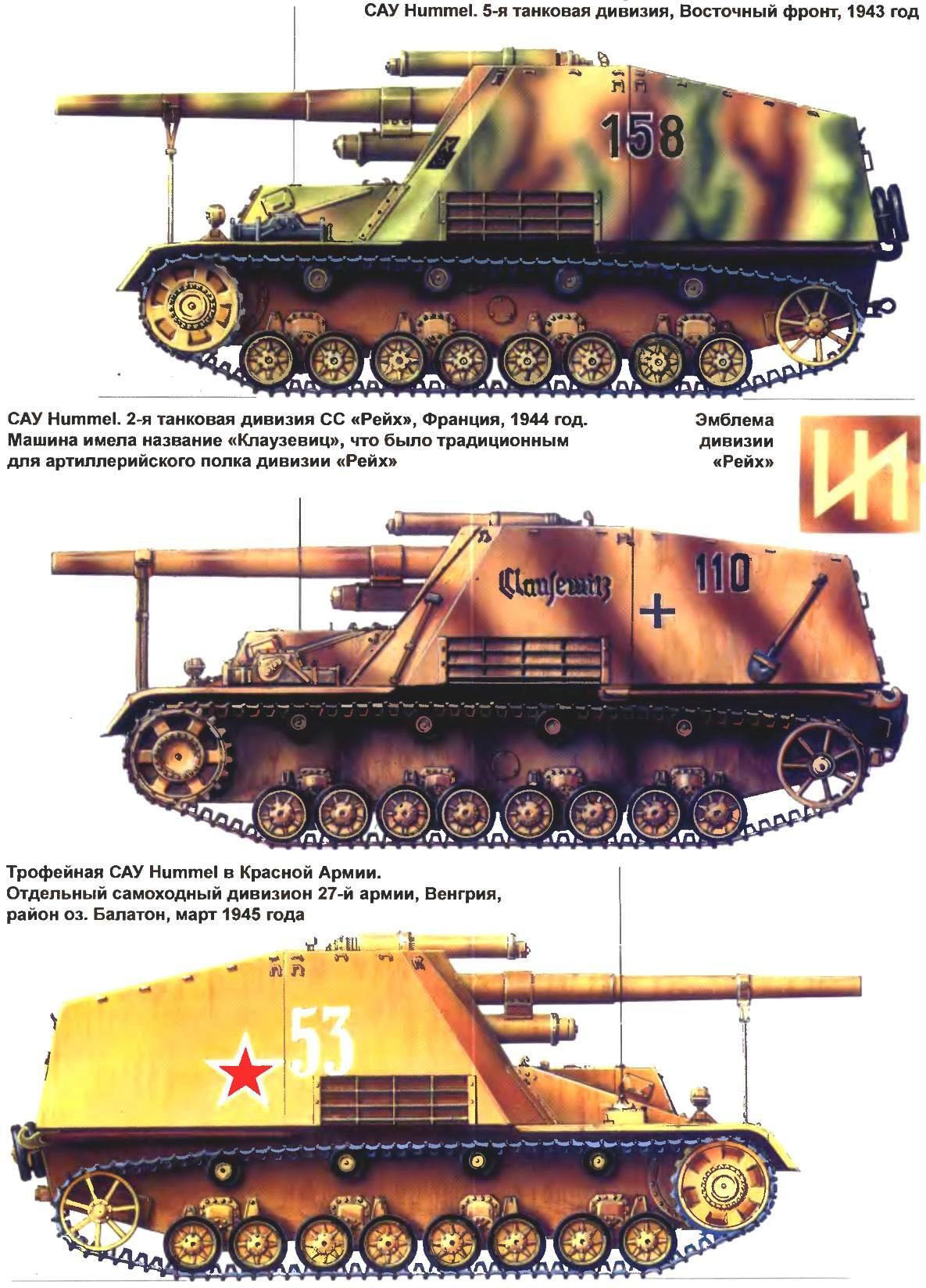 “Highlight” of the project was the possibility of a fairly rapid dismantling of the tower with the mounted directly on the machine frame foldable crane fixtures. Once removed, the tower could be transported separately from the chassis or towed by the chassis on a two-wheeled trailer. Towing of the tower was produced by the barrel. From the point of view of today, it is not clear why all this was necessary. In the postwar period, such decisions were sometimes offered to transport tanks by air, but in this case it is unlikely it could be the cause — the Germans simply did not have aircraft able to lift a 23-ton combat vehicle.
In 1942, Krupp produced three prototypes samomoderirovanie installation, the designation of 10.5 cm leFH 18/1 L/28 auf Waffenträger GW III/IV or “Heuschrecke 10”.
Not wanting to be left out, the firm Rheinmetall-Borsig has developed a competitive project of the ACS, and the factory Deutsche Eisenwerke produced the prototype underwent trials in 1942. The machine was similar in design to Krupp, but was much easier, since no dismantling of the tower was not provided. As the weapons used modified 105-mm field howitzer leFH 18/40, which was located in a rotating turret box shape, and had a roof. Elevation of the howitzer was carried out in the range of from -10° to +70°.
No kroposki or rahmetullahi options in the mass production was not.
From the stage of wooden models and a few variants unarmored self-propelled guns, designed on the chassis Geschützwagen III/IV. These machines were created in the framework of the concept Waffenträger — “bearer of arms” or, apparently, more precisely, the “carrier of weapons”. Was designed two machines: one — armed with a 128 mm gun К81 and the other 150 mm howitzer sFH 18/1. In both cases, the guns were placed on rotating platforms, mounted on “gun chassis”.
M. BARYATINSKY