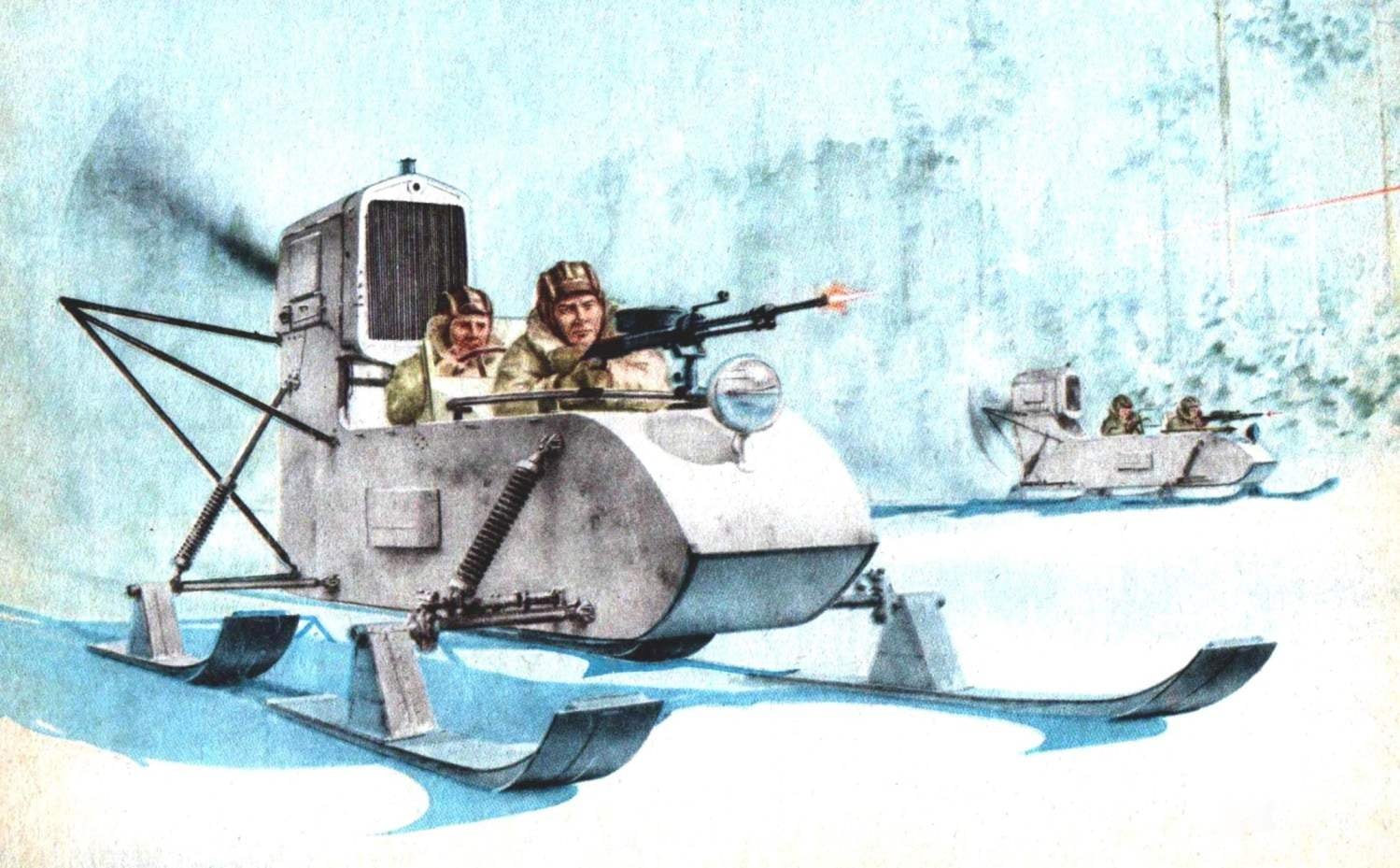 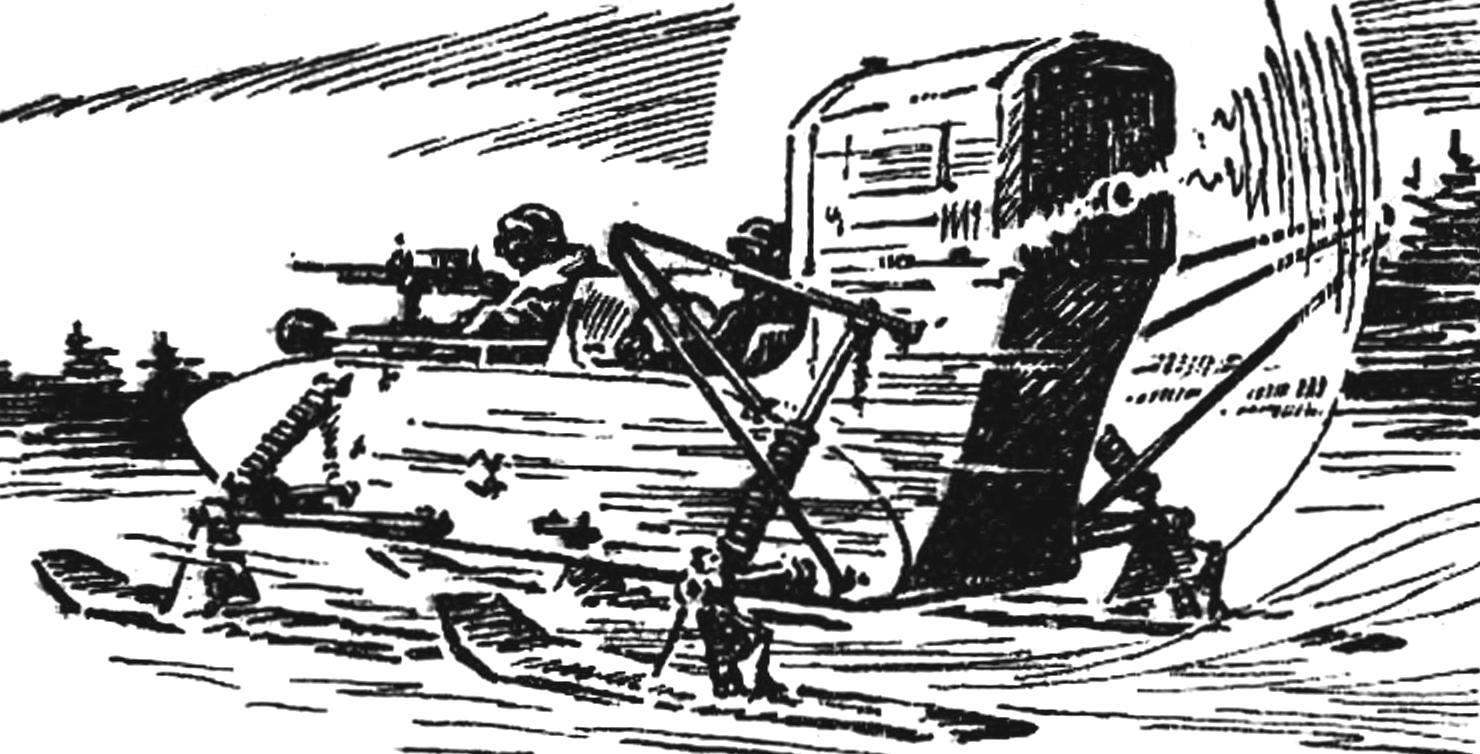 SNOWMOBILE RF-8-GAZ-98. Snowy and cold winter of 1941/42 created the conditions for widespread use we combat and transport equipment. “Hint” the Russian winter has been perceived by our troops. In January 1942, in many parts of the fronts in the suburbs, in the area of Staraya Russa, in the North-Western front we had the first units. Off-road combat and transport battalions, equipped with the appropriate types of planes, got into the hands of one of the main trumps of the war — the mobility and speed of movement. In the most unexpected for the enemy areas is rapidly emerging, and conducted a successful combat operation of our units. The enemy were guarding the road — snowmobiles appeared due to impassable snow drifts. The effect of surprise, the transience of the battle behind enemy lines produce a striking effect on the Nazis. Meanwhile, transport the snowmobile ride of the new Marines that had secured the success of the operation.
Some features combat tactics and technical equipment of a snowmobile of the type NC-36, vehicles NKL-16/41, NKL-16/42 we already told on pages of our magazine. Today it was the turn of another type of snowmobile, RF — 8-GAZ-98, which is associated with many bright pages of the battle history of the Soviet Army.
Snowmobile RF-8 was created OKB Narcomiscoma under the leadership of chief designer M. V. Veselovsky on the instructions of the State Defense Committee of the USSR. In creating this war machine was attended by a large group of engineers: II. F. Meyer, I. K., Chichiri, E. I. Malekhanov, A. A. Smolin, V. A. Zverev, N. A. Ronzhin, I. A. Kunaev, A. I. Smirnov, and many others.
Talented designer M. V. Veselovsky created in the period from 1932 to 1941 several types of original aerospa. Machine index GGAT-3, KM-4 and KM-5 were made parties to the communication needs and the national economy. At the beginning of November 1941 the industry was given the drawings of combat snowmobile RF-8; GKO of the USSR entrusted their production to several companies, including Gorky automobile plant.
In coordination with the chief designer of motorists made to the drawings, a number of changes to the mass production of sledges consistent with the adopted plant technology and available materials. This work was conducted under the direct supervision of the chief designer of the plant A. A. Lipgart. Working on the car participated A. D. Prosvirin, A. M. Kriger, A. V. Kostin, V. I. Borisov, G. I. Krasilnikov and others.
At the end of December 1941 the first batch of vehicles of the type RF-8, which received factory index GAZ-98, has already entered many sectors of the front. They were stocked we combat battalions. 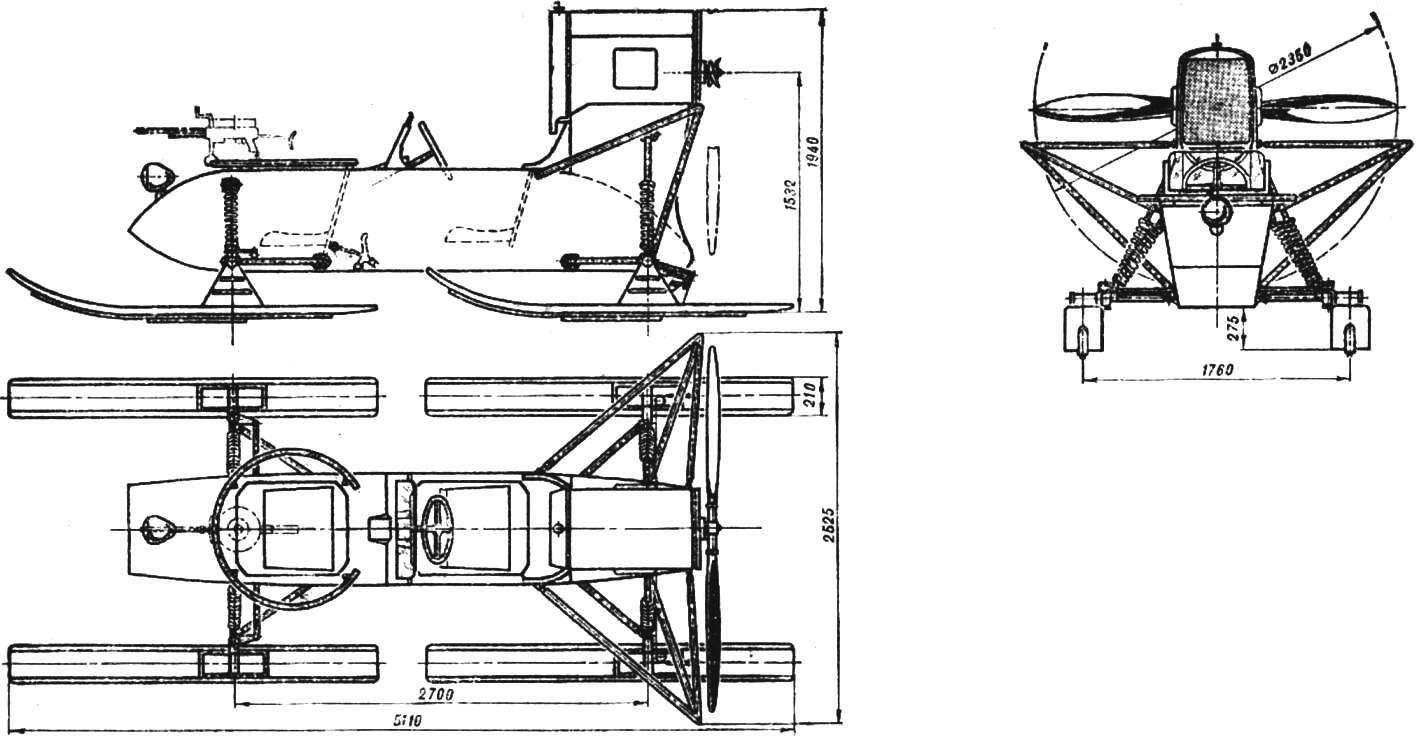 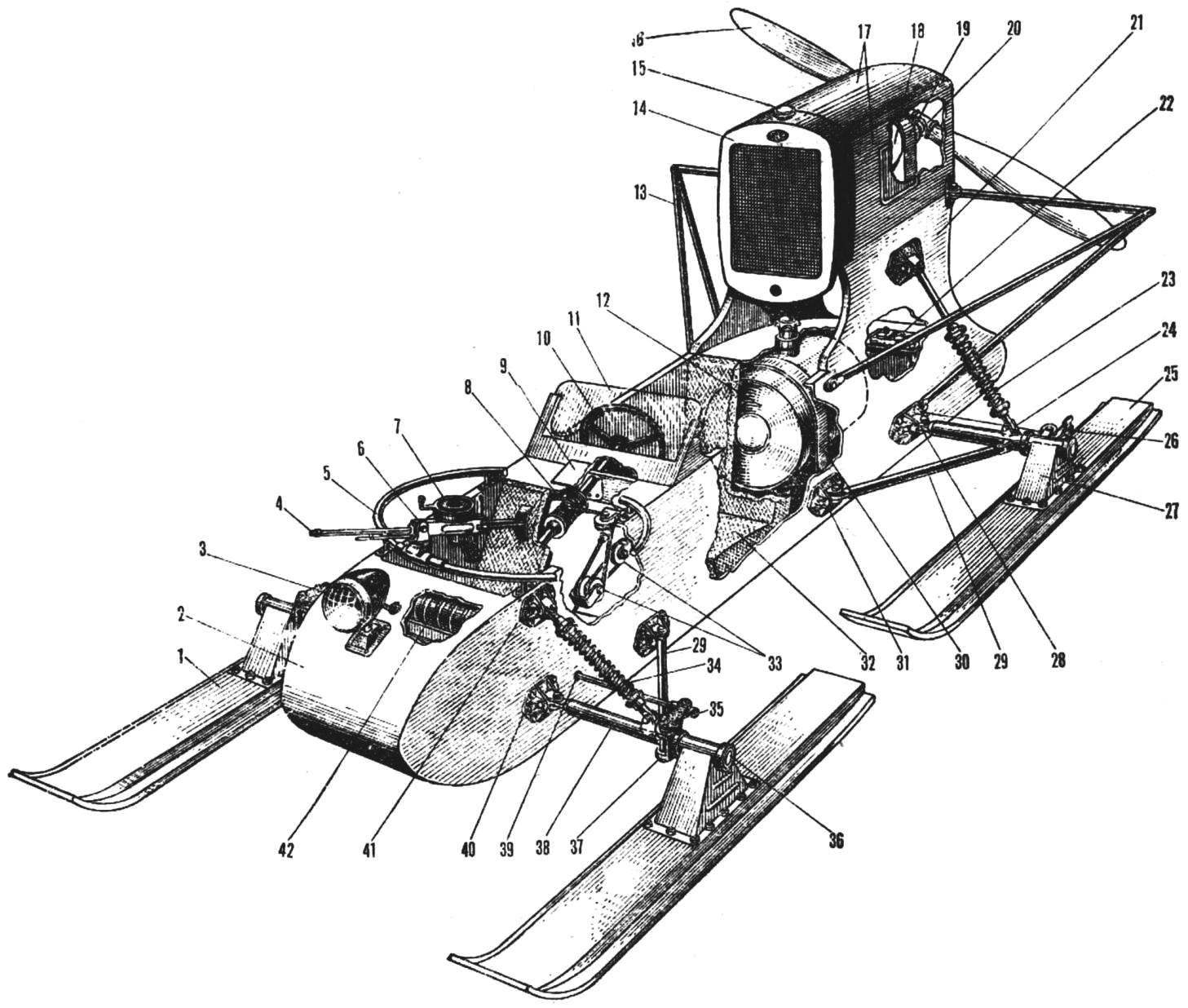 Fig. 2. The layout of the snowmobile RF-8-GAZ-98:
1 — ski, 2 — hull, 3 — headlight, 4 — machine gun 5 — ring turrets, 6 — mounting bracket machine gun, 7 ammunition cartridges, 8 — steering column, 9 — upper bracket, 10 — steering wheel, And windscreen, 12 — fuel tank, 13, farm fencing screw, 14 — water radiator, 15 — radiator cap, 16 — propeller, 17 the engine hood, 18 — engine, 19 — reduction gear, 20 — bushing of the propeller 21 — pylon, 22 — battery 23 — rear strut, 24 — rear drive axle, 25 — rear ski, 26 — brake mechanism, 27 — ski pylon, 28 — joint, 29 — unloading brace, 30 — feed fuel tank mounting, 31 — knot on the case, 32 — seat, 33 — cable and rollers control 34 — front strut 35 to the control arm, 36 — ring fastening sleeve pig ski, a 37 — rotary drive axle, 38 — main semi-axis, 39 — lateral control rod, 40,41 — upper and lower suspension components, 42 — a shelf to store ammunition.
A distinctive feature of the snowmobile RF-8-GAZ-98 was that they were not equipped with aviation, and much more cheap production car engine GAZ-M-1 production of the Gorky automobile plant. In addition, they set a two-bladed metal propeller. The presence of the screws from the metal significantly expanded the possibility of their use. This machine is passed through copses, not terrible she was and forest roads, where other types of snowmobiles with less durable wooden propeller used could not.
Snowmobile RF-8-GAZ-98, as a more reliable, widely used on the fronts for combat and intelligence operations. They went behind enemy lines and alone, and fighting divisions. On account of the hundreds of successful operations, the implementation of important tasks on communications of staff with advanced military units, delivery of urgent reports, patrolling of individual sections of the front, protection of strategically important objects.
Combat snowmobile RF-8-ГА3-98 is designed to be placed on chetyrehstennoy scheme with two guided skiing. Housing semi-open, double, sequential arrangement of the seats for the crew. For ease of firing is installed on the snowmobile with a machine gun and to increase the horizontal angle of fire arrows was located in the front seat, and the driver of the car in the rear cockpit. There is a steering wheel, foot gas pedal, brakes, swing machines, etc. Behind the cab on a special pylon-rotor setting placed down inside the hull, fuel tank and battery.
Suspension front and rear independent ski performed on a pyramid scheme — the installation of the ski on the axle with spring suspension struts. Fastening of hangers to the power nodes on the body is via a swivel. Skis are fixed bushings hogs on the axle shafts by means of steel rings, which counter the cone bolts.
The steering column with the steering wheel with the drum for winding the steering cable is attached to the casing upper and lower nodes. 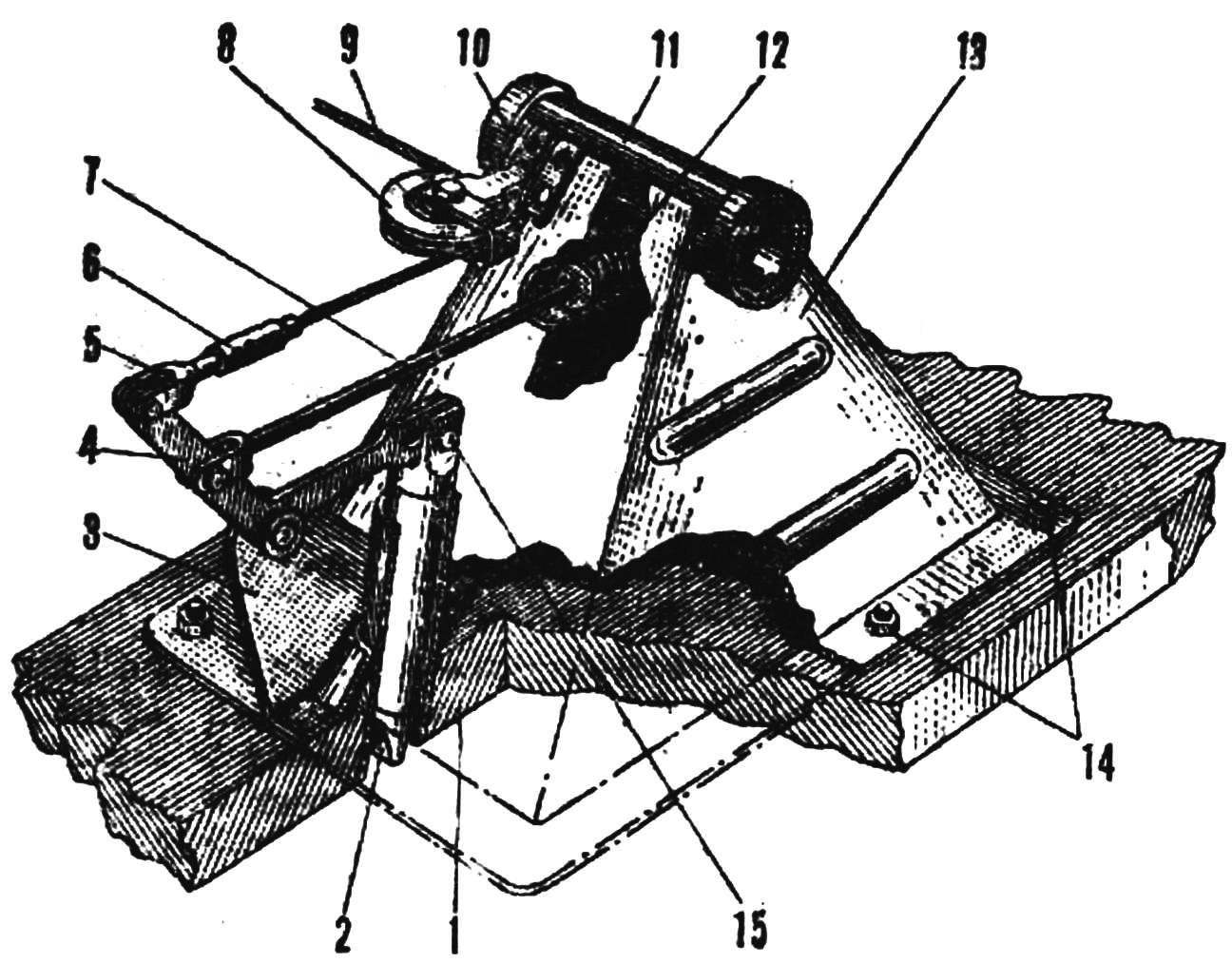 Fig. 4. Front suspension — left (unassembled):
1 — ring fastening bushing bore, 2 — axis turning, 3 — bronze bushing, 4 — cone mounting bolts of the control lever, 5 — lever, 6 — ball bolt, 7 — axis with ears mounts and strut brace, 8 — joint, 9 — fixing unit body, 10 — brace, 11 — adjusting threaded tip, 12 — bolt, 13 — a bolt of fixing the king-pin, 14 — pin, 15 — bronze washers.
The motor reducer is mounted on the sub beam of the pylon and attached at four points with paws available on the engine block and the gear housing. The front of the engine on the front ends of the beams fixed automobile water radiator. Fuel tank capacity 80 l located behind the driver’s cabin, inside the case. The tank is installed on the lodgment has the filler neck made on the plating inside the pylon.
Of special equipment the following should be noted. The upper hull plating above the front cab is simplified turret ring for mounting a machine gun. The machine gun rotates freely, providing horizontal angle of fire up to 300° and elevation angle to 14°. Under the bow plating on a specially made shelf is placed on-Board the ammunition — 10 stores of ammunition for the machine gun and grenades for close combat.
Snowmobile RF-8-GAZ-98 was modification made in 1942-1943 military engineers of brothers Ivan and Alexey Beskurnikov. In one embodiment, under engine pylon was replaced with a tubular sub frame. The snowmobile with an index of GAZ-98K car engine replaced aircraft M-11 110 HP, which made the car more dynamic. Based on the GAZ-98 was created by a staff variant with enclosed cockpit (limousine); this car had no weapons.