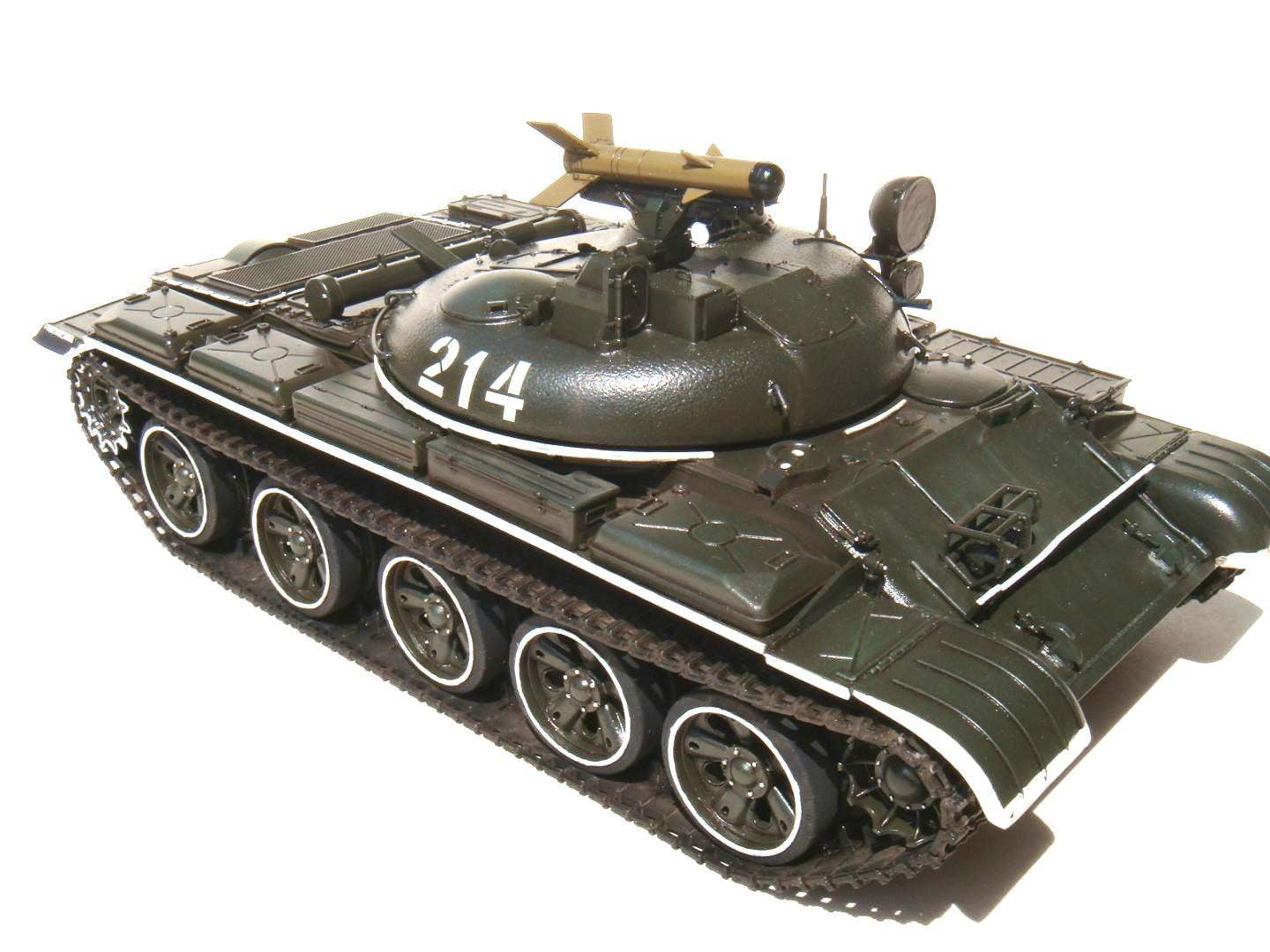 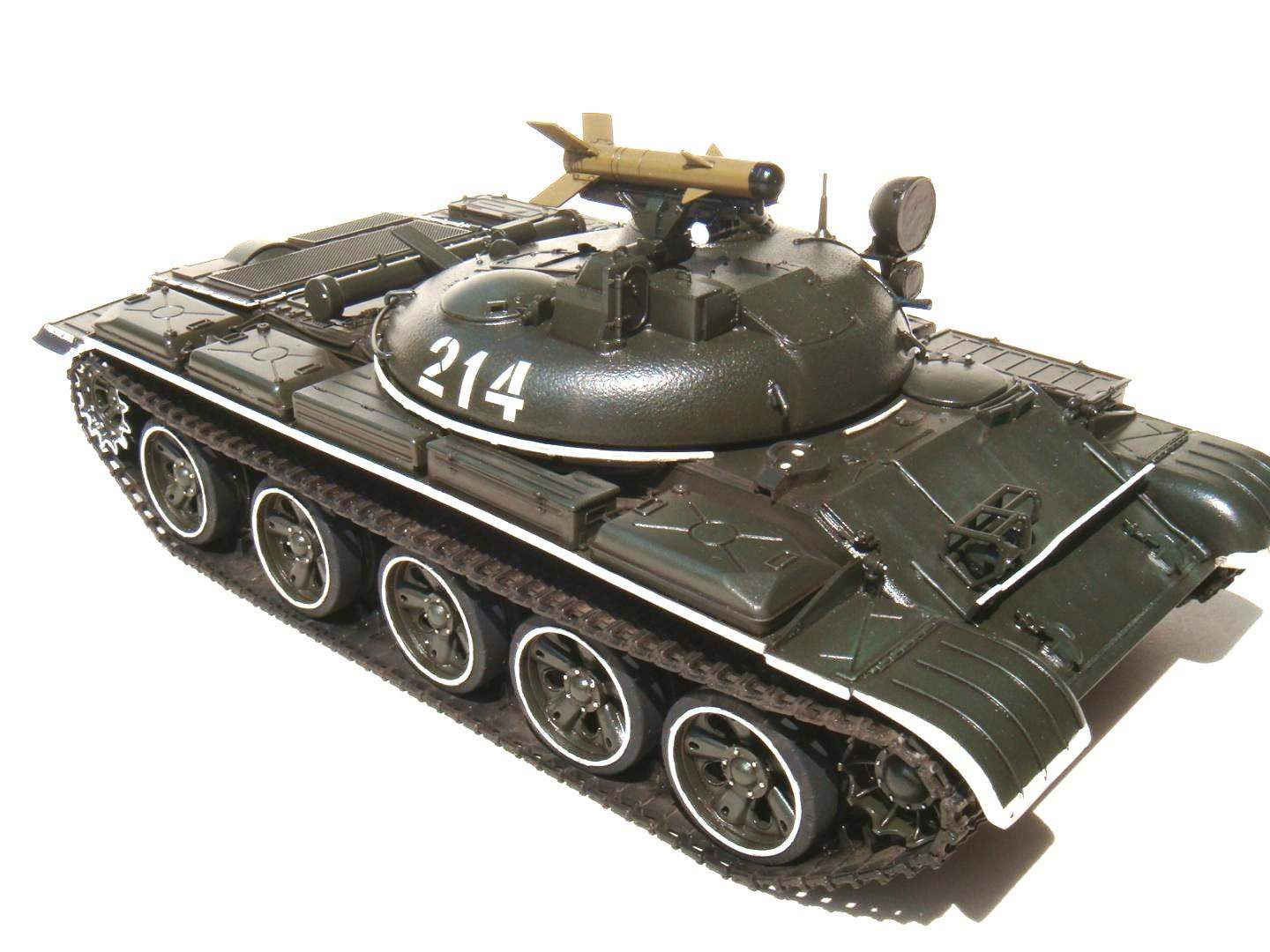 In 1957 the Soviet Union began to develop missiles for army vehicles. In the Kolomna Design office of mechanical engineering B. Shavyrina studied the possibility of equipping tanks missiles as additional weapons to the placement of missile launchers on the tower. In Bureau of the Chelyabinsk tractor plant, headed by P. Isakov, the Leningrad Kirov factory, headed by Zh. Kotin, “Uralvagonzavod” by L. Kartseva was carried out design work and testing of rocket tanks.

This combat vehicle – a tank destroyer with guided missiles ЗМ7 complex “Dragon” was intended, according to the plan of military experts to support tank formations during the breakthrough attacks on enemy fortifications, and also for organizing their own anti-tank defense in hazardous areas, especially on the flanks of the military units. It 1 should have been completed in separate battalions and to act in the composition of the motorized rifle divisions.
Like rocket tanks (Raketenjagd-panzer) was issued at the time and in West Germany. With 1967 as part of the Bundeswehr began to receive “Jaguar-1”, created on the basis of tank destroyer Ipz 4-5. Their production was organized by companies “Hanomag” and “Henschel”, which for the period 1967 – 1968 collected 370 machines.
German vehicles were armed with the French anti-tank missile complex SS-11 with manual control and transmission of commands over the wire. The complex range of 500 – 3000 m, the speed of the missile is less than 200 m/s. Its mass is about 30 kg, shaped charge could penetrate armor up to 600 mm thick.
Due to the low rate of fire of the complex – only 2 start minute – the designers are placed on the cutting machine from two launchers, which could automatically move through opened hatches. To recharge the installation crew had to manually. 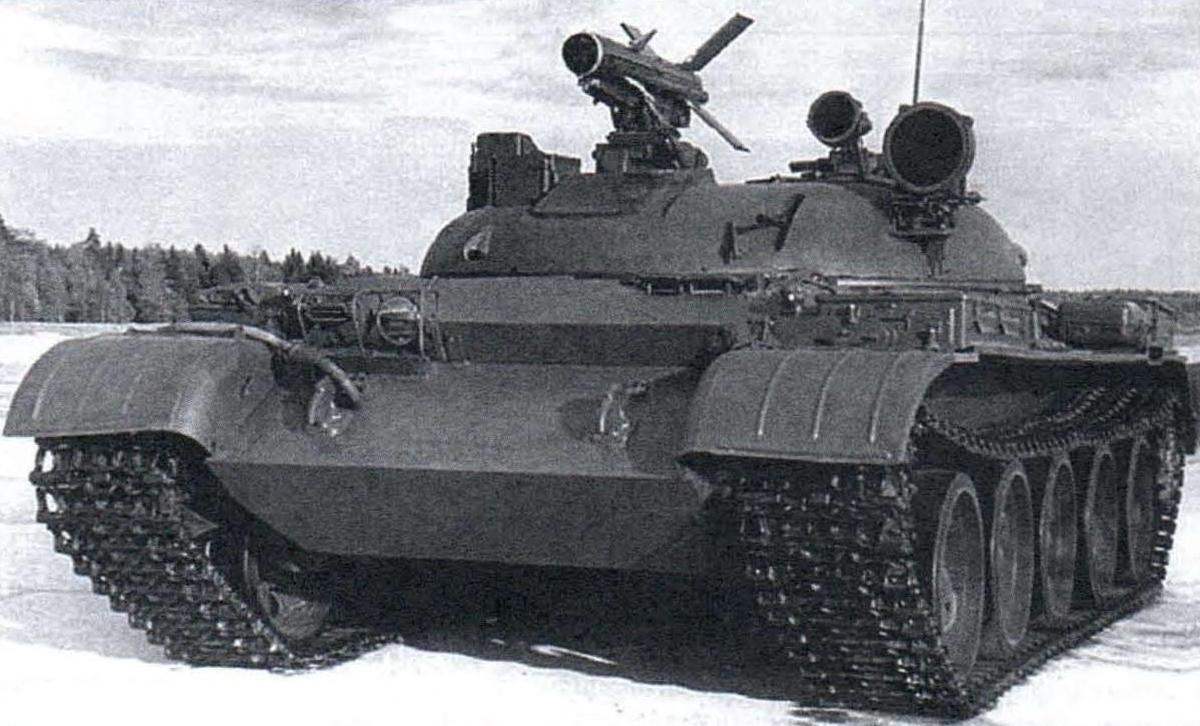 The rocket tank the it-1 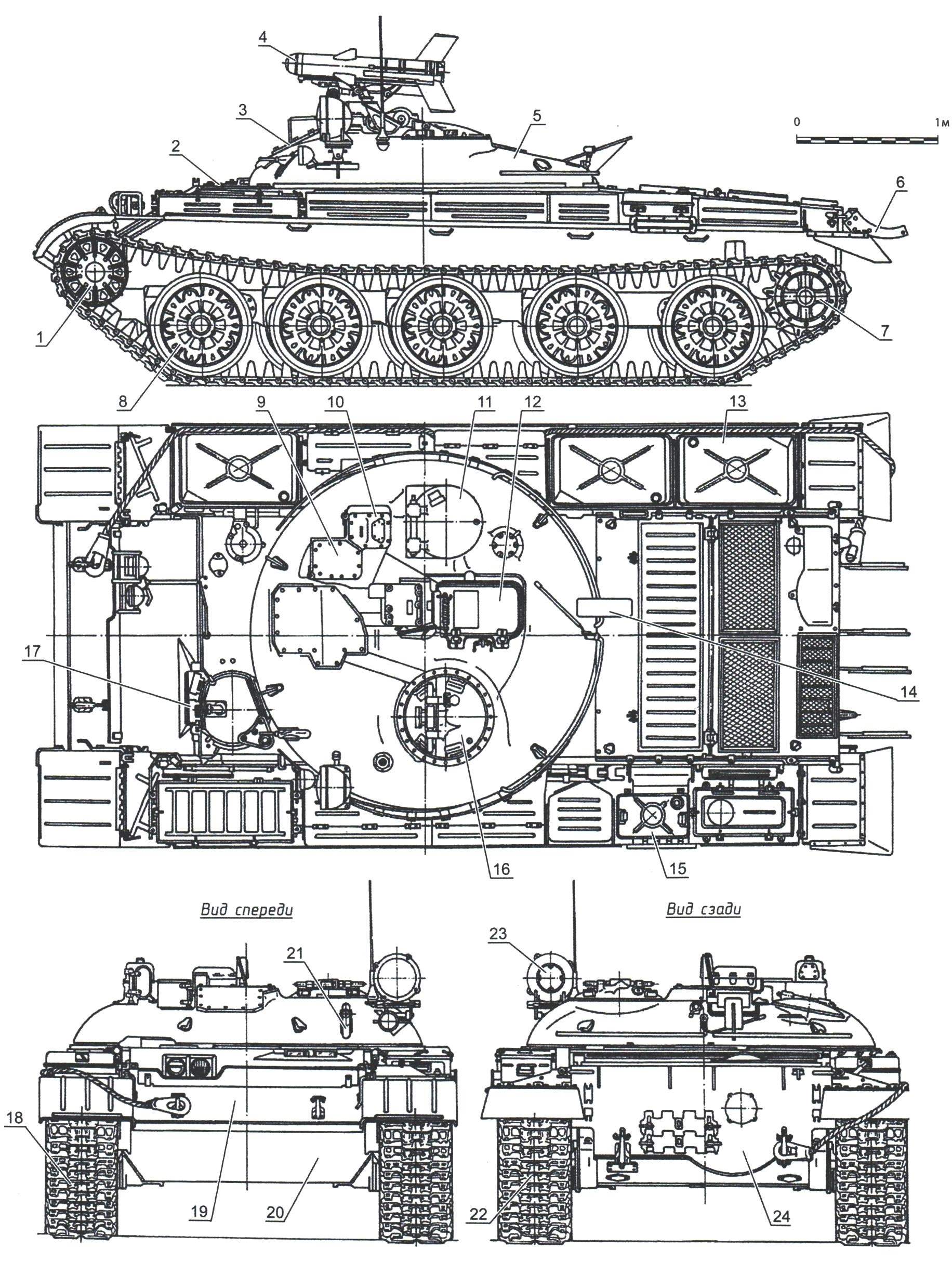 The scheme of the tank the it-1:
1 – idler: 2 – cover of the driver’s hatch; 3 – cover antenna radio command line; 4-ПТУРЗМ7; 5-burnatonce; 6 – bracket rear outer of the tanks; 7 – driving wheel; 8 – support roller; 9 – day sights; 10 – night sight; 11 – cover of the hatch of the gunner-operator; 12 – cover the issuance of CP; 13 – external fuel tank fenders; 14 – bump the starting of the gas jet rocket engine; 15 – exhaust manifold; 16 – cover of the hatch of the tank commander; 17 – observation devices of the driver; 18 – front mudguard; 19 – upper frontal armor plate; 20 – lower frontal armor plate; 21 – embrasure machine gun PKT; 22 – caterpillar; 23 illuminator night sight L-2R; 24 – the aft armor plate; (top, front and back poses. 4 PLANO not shown)
Later, on the “Jaguar 2”, has mounted a complex SS-11В1, which had a semi-guided missile.
Such jaguars replaced the American M41 “Walker Bulldog” and the M47 “Patton II”, consisting in a fighter-anti-tank companies of mechanized infantry brigades and was considered at the time the most effective means of combating tanks.
In the Soviet Union in the early 1960s, it was proposed to convert the serial tanks T-55 and T-62 in a purely missile: shoot cannon armament and in its place to accommodate the launcher. For the first time as the chassis of this tank used the T-55 (“object 166”) simultaneously projecting lower tower. The overall design of the entire missile system and missiles, the government decree of 4 July 1959 instructed the CB-1 of the state Committee of electronic industry, headed by A. Raspletina, and Tula TSKB-14 (instrument design Bureau), led by chief engineer B. Huminski.
Case it-1 is only slightly different from the production T-62 and carrying an anti-shell armor thickness up to 100 mm low Profile tower was a cast steel shaped casting hemispherical shape with walls of variable thickness from 60 to 135 mm. the Frontal part of the tower had thick armor 120 – 200 mm.
Layout of machines like the T-62 — a classic, with the compartment in the front of the case. When driving a tank driver-mechanic observation used two prismatic observation devices installed in front of his hatch in the roof of the enclosure. Luke closed armor swing lid. In addition, at night the driver can use night device TVN-2.
The fighting compartment layout and equipment which was quite different than the T-62, occupied the middle part of the hull and turret. In the center of the tower was launcher (PU) with electrical equipment and the loading mechanism with mechanized rack with 12 missiles. The gunner was located on the right side, the commander on the left. In the tower front mounted guidance station and the rockets peripeteia and reconciliation of sight with the radio station R-123.
Before the operator is mounted monocular periscopic day sight 1-OP2 stabilized field of view, electro-optical periscopic night sight 1ПН12 with 7.3-fold magnification, the units develop teams, and to the right of it -control of the operator. 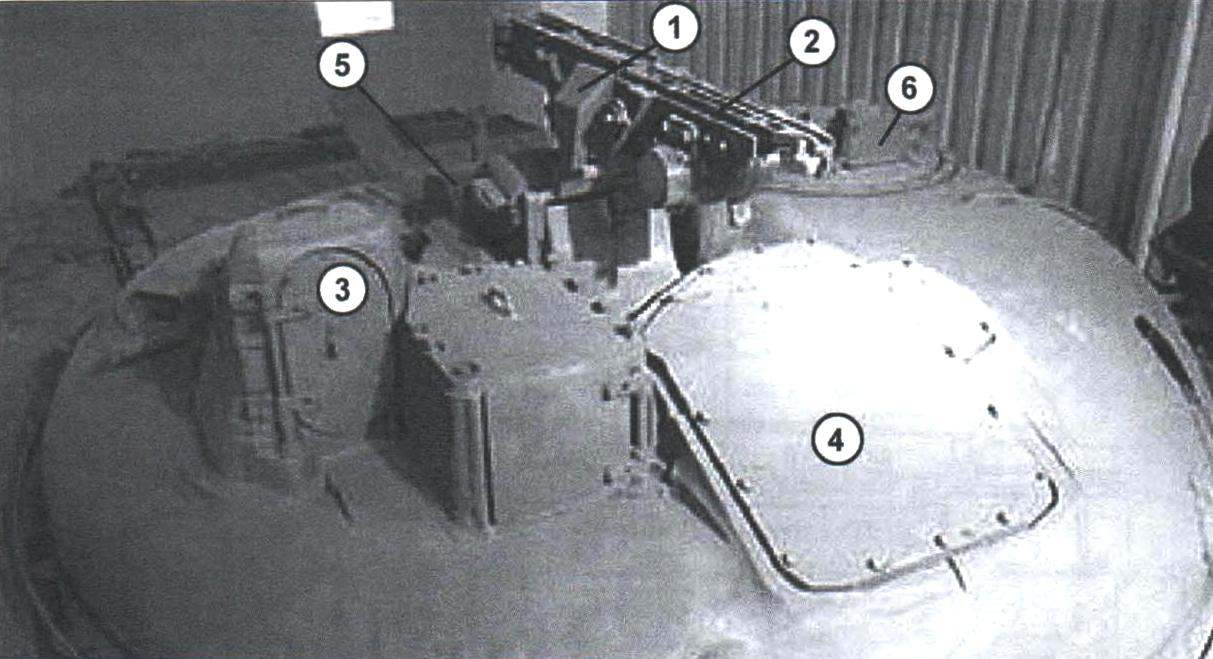 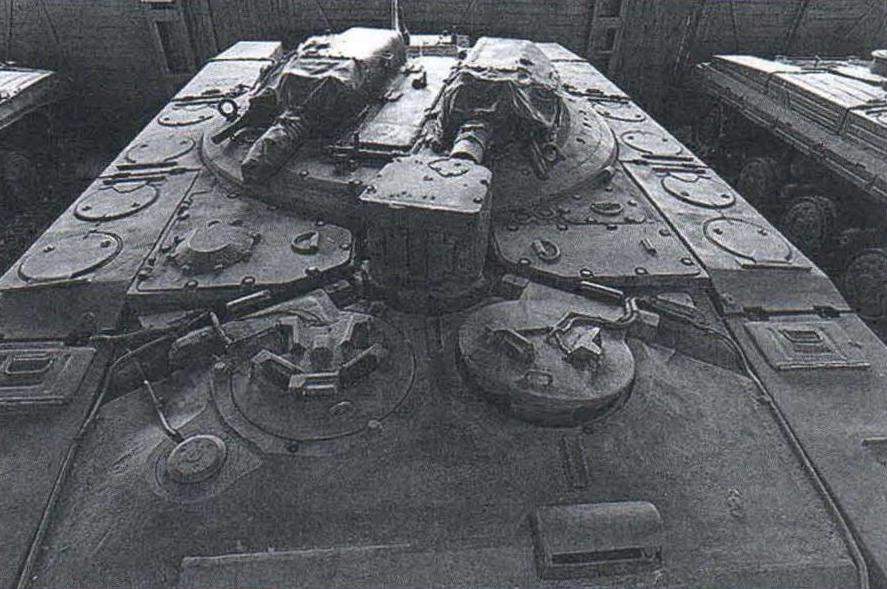 The roof of the tank “object 287”. On the turntable is equipped with two 73-mm cannon. The launcher was nominated through the Central hatch between them
At the same time in the KB Chelyabinsk plant under the supervision of chief designer P. Isakov has designed and produced a prototype of another version of the missile tank “object 775” complex “Rubin”, including anti-tank with the same title. Base for him was also a T-64 tank. The crew of two was housed in an isolated cabin inside the tower. The place of the driver with his monitoring devices were located on separate rotating platform: it would not have turned the tower, he was always the “face in motion”.
Designers managed to reduce the height of the tank to 1100 mm (for the roof), install the torsion bar suspension with a stepped clearance. The combat weight of the tank – 30 tons, the engine – diesel 5ДТФ 700 HP
The tower was a rifled cannon launcher D-126 for firing guided missiles and unmanageable active-reactive high-explosive shells (nurs) “drill”. The mechanism of loading – semi automatic, shooting – remote controlled of the hull. PU stabilized in two planes and given the opportunity to fire on the move.
Missile complex “Rubin”, developed by KBM in Kolomna B. Shavyrina, suggests semi-automatic control system by radio link. The range of missiles – up to 3800 m, range unguided projectiles was 9000 km.
Ammunition of the tank were 14 anti-tank and nurs 17 (according to other sources – 15 – 24 and 22 – 48, respectively).
Testing of experimental rocket tanks, “287 sample” and “model 775” live-fire have not been successful because of the unreliability of the action of launchers, but their finishing was not completed due to adopting the it-1.
By the early 1970s, the views of the military leadership on the need to have a battle-ready military units of the missile tanks has changed. It 1 had gun arms, so use them in advanced orders at rapprochement with the enemy caused some issues. To support with ATGM could be used as carriers and much less heavy machinery – self-propelled anti-tank missiles ATGM with the rockets through the usual cannon barrels. Thus, the missile tanks had no place in the military ranks…
The performance characteristics of the ATGM ЗМ7
Caliber, mm – 180
Launch weight, kg – 50 – 54
Length, mm 1250
The scope of the stabilizer, mm – 850
Warhead weight, kg – 5.8 to 7
The mass of the explosive, kg – 2,0 – 2,52
Warhead – cumulative
Firing range, m; maximum day – 3300, 1500, minimum day – 300, 400 m
Flight speed, m/s: maximum – medium-224 – 200 – 217
Flight time at maximum range, 15-20
Armor penetration, mm: 90° – 500 at an angle of 60° – 250
Motor is solid
Control system – semi-automatic, radiolinija, with optical tracking purpose
Weight of control equipment, kg – 520
The dimensions of the rocket in the transport position, mm – 1250x230x230
The manufacturer of the launch of the Izhevsk plant
The performance characteristics of the rocket tank the it-1
Crew. – 3
Combat weight, t – 35
Length, mm – 6630
Width, mm – 3330
Height, mm – 2200
Ground clearance, mm – 430
Booking, mm: forehead corps – 100 Board connector – 80 forehead towers – up to 200
Engine – diesel, V-type, four-stroke V-55A liquid cooling 580 horsepower
Maximum speed, km/h – 50
Cruising on the highway, km – 500
Specific power, HP/t – 16,8
Armament – anti-tank missile system 2К4 “Dragon”; 7.62-mm machine gun PKT
Missile – antitank ЗМ7
Ammunition:
missiles -15
7.62 mm rounds – 2000
Type of launcher is built into the tower
Transfer time from traveling to the willingness, min -1 — 1,5
A time of transition in the firing position, C – 6
The pace of launches, RDS./min – up to 5
Firing:
day – and on the move
night –
Station guidance – semi-automatic radio command 1S7
Stabilizer – plane 2ЭЗ
The Radio Station R-123
Pyropolymer – GPK-59
A means of smoke-screens – TDA
Fire fighting equipment – automatic, the composition of “3,5”, eight temperature sensors
Standard weapons: automatic AK-47 with 500 rounds of 12 hand grenades f-1 flare gun
Overcoming obstacles in m
– trench width – 2,85
– wall height – 0,8
– Ford – 1,4 (OPVT – 5)
– the rise, deg. – 32
The developer tank – Ural KBTM
The Factory “Uralvagonzavod”
Serial edition – 1968 – 1970
V. BORZENKO