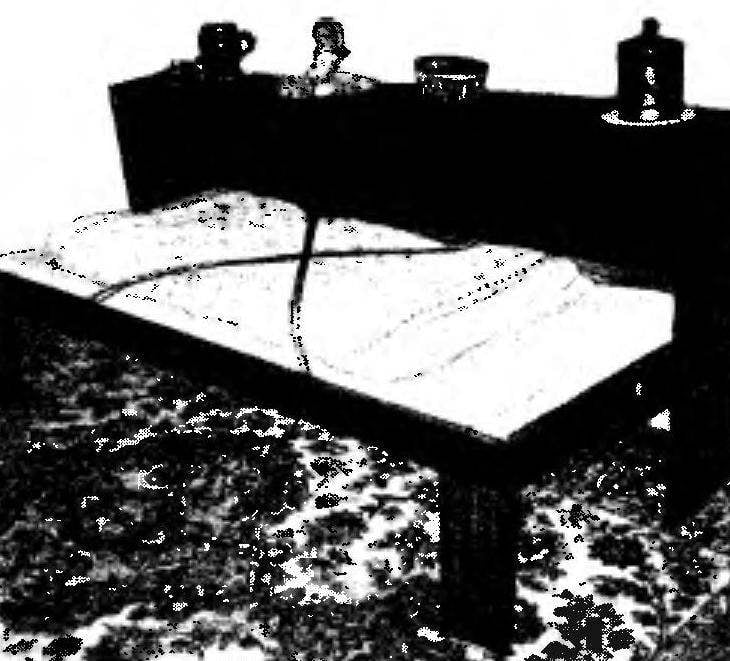 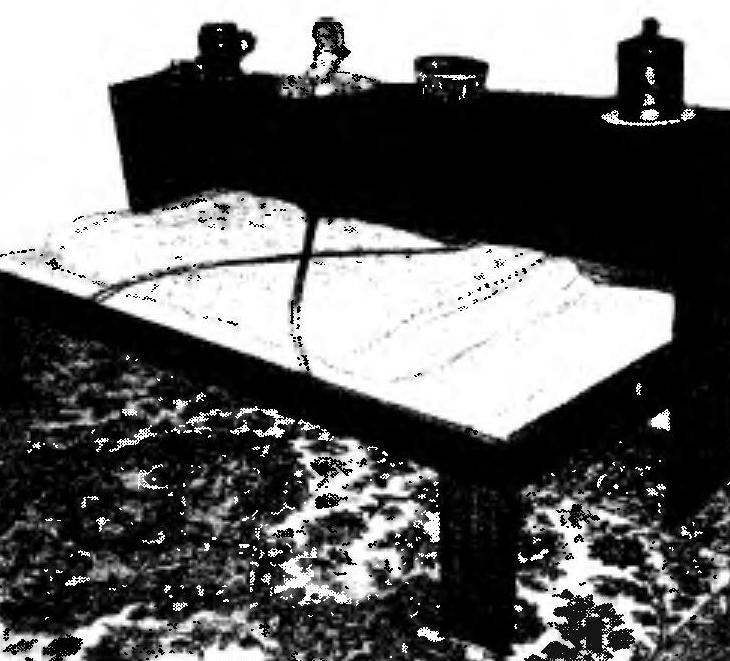 Your magazine has repeatedly published the various options of folding and folding beds. Want to offer your own version. I must admit that to take a tool I made coming first “coupon” shortage in stores and market wealth with a “biting” prices. By the time son grew out of his crib, which he inherited from his daughter. New had to do yourself.
Getting started making the bed, I looked at the small size of the apartment (they have enough): it’s just better to occupy less space. What turned out — to judge to readers that, despite all difficulties, remain faithful to their favorite magazine (I subscribe since 1968).
The material was collected, as the saying goes, “every little helps” — more precisely, on the plate. From an old crib it went of the back of chipboard: one of two sidewalls (det. 4, Fig. 1), the other on the wall, a foot back (det. 14, Fig. 2), the hinged leg and decorative (two pieces, det. 3,5, Fig. 1), as well as furniture bolts and nuts (det. 7, Fig. 1, 6 PCs.).
Rear wall composed of separate boards (chipboard, 8), and side — veneer “wood” (it would be better, of course, to make from whole leaves, but they did not exist). All the leaves (boards), particle Board standard thickness is 16 mm. the Top cover is assembled from two wooden planks and sheathed entirely in leatherette (top and bottom) as the front side of the lounger (see below). Possible (or even desirable) option cover from a piece of particle Board, also veneered “wood”. The back wall can sew up the regular plywood, but in this case, the bed will be less stable in the folded position.
Timber (det. 8, Fig. 2) staples housing beds in a single unit. Fastening — countersunk screws (rear wall to the beam and side walls) and using the furniture bolts (side bar and top cover). 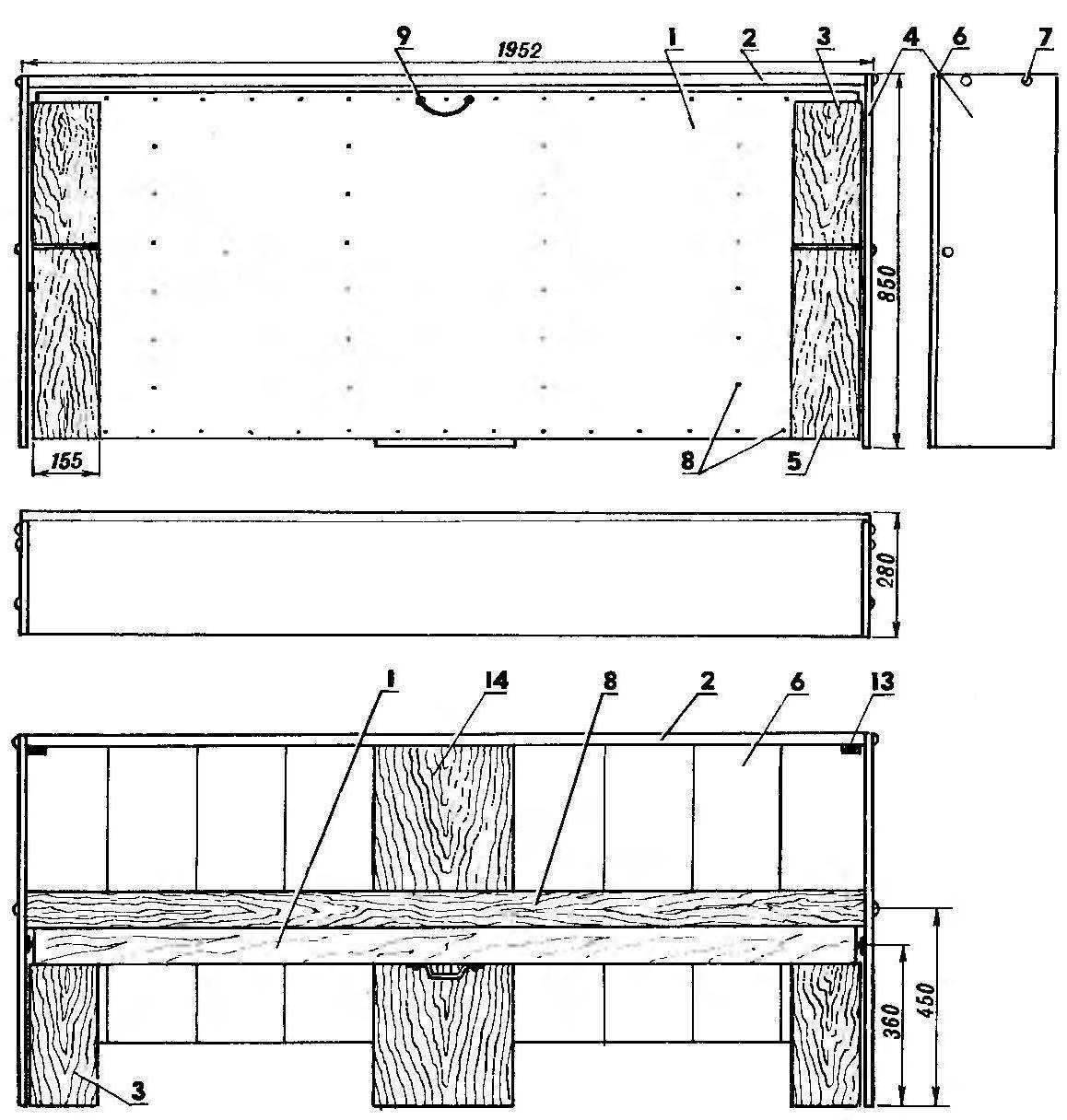 Fig. 2. Bed in working position:
1 — lounger, 2 — cover, 3 — leg folding, 4 — side boxes, 5 — panel decorative, 6 — wall box (8 panels 700×200 mm) 7 bolts furniture, 8 — rear support beam (reclined lounger), 9 — hinge joint, 10 —rails, 11 mattress 12 — piano hinge, 13 — magnetic latches (2 PCs), 14 — panel-leg (850×320 mm).
The rug used from a spring mattress, an old couch (the springs and stuff threw out, only the power frame made of bars with crossbars and sheathing of fiberboard). Sunbed modified by inserting to strengthen the cross rails (12 PCs.). To give a more aesthetic appearance on the outer side of the lounger covered artificial leather (leatherette) from a set of stitched (color brown). Beneath this lining is a thin layer of wadding (batting) of the same set with decorative furniture nails (det. 8, Fig. 1). Resulting in a kind of trough is embedded foam mattress. From falling out when folded it is held two ribbon-clip with hooks (ribbons are attached to the rear longitudinal bar of the lounger and clinging hooks for the loops on the front bar). The volume of the resulting tables allows you to remove and fastened together with a mattress a blanket (even thick winter) and not very plump pillow. As tape-clamps used gum from children’s suspenders (from the adults too long); almost four-year operation showed that it would be better to use for this purpose connected in a large square (100×100 mm) mesh or use the cut from the old volleyball net, leaving small pieces of rubber bands from the hooks.
The highlight of this bed is not seen in the publications of the magazine unit rotation of the folding part (sunbed), which allows not only to lower but also to carry out movement of the rug relative to the body of the bed. I was “lucky”, I used a ready rotating Assembly consisting of a rail (rail segment) and a support axle on which is mounted a bearing with a diameter of 11 mm (see Fig. 4, var. B) that reduces friction and requires no lubrication of all rotating unit (because grease is not desirable in contact with the bed).
This design allows to reduce the dimensions of the bed (height) in the folded position and lowers its center of gravity, improving stability, which is important when small width when folded.
The lounger reclines as follows: pull the handle (det. 9, Fig. 1), mounted on the bed, taking it out of engagement with magnetic snaps (det. 13, Fig. 2) and deflected by approximately 25…30 degrees from the vertical position. Then, pulling up, raising the rug on the entire course of the skids, and then lower it to horizontal (can be omitted, while pulling); however, lean legs are attached with piano hinges. 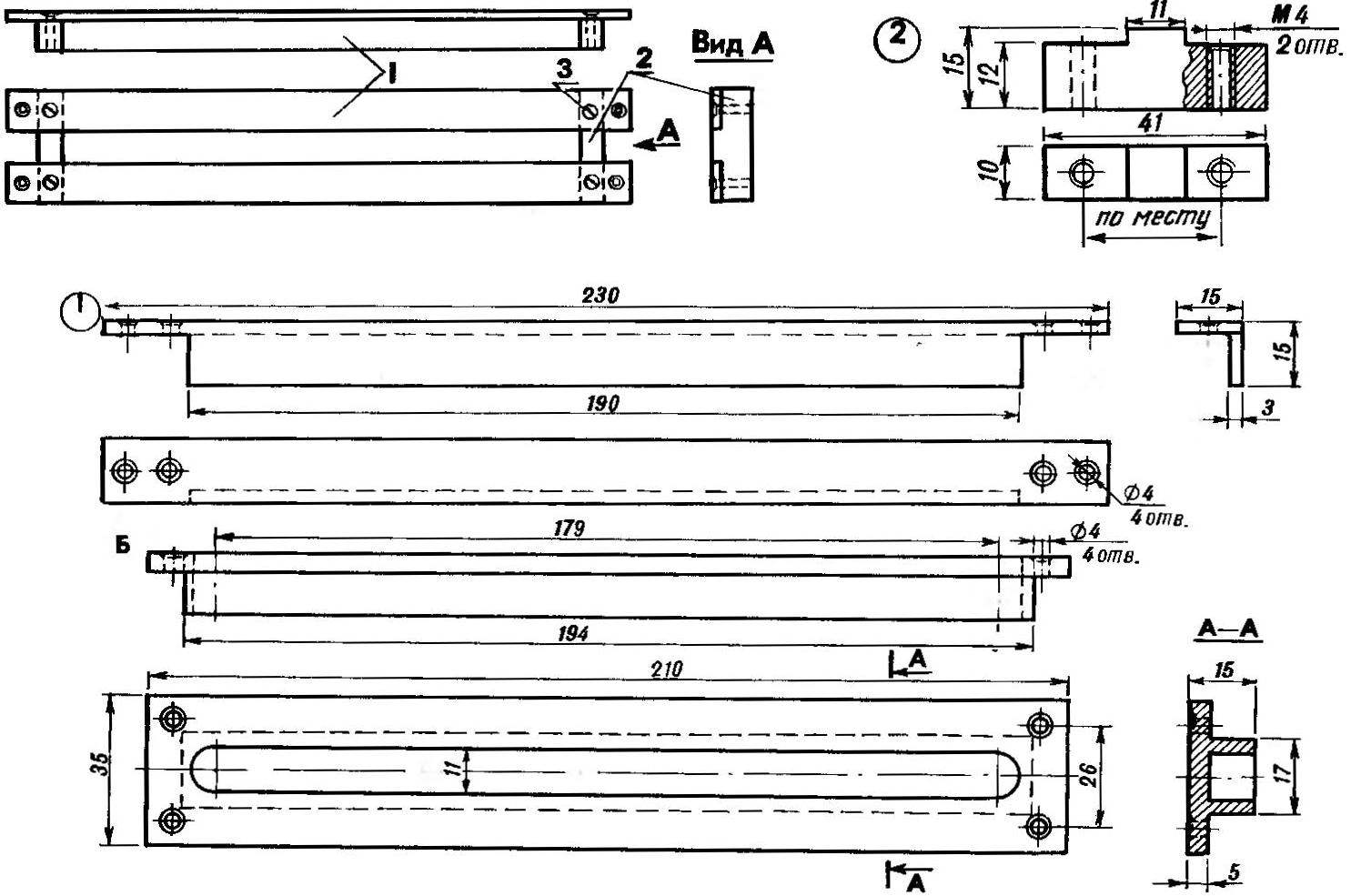 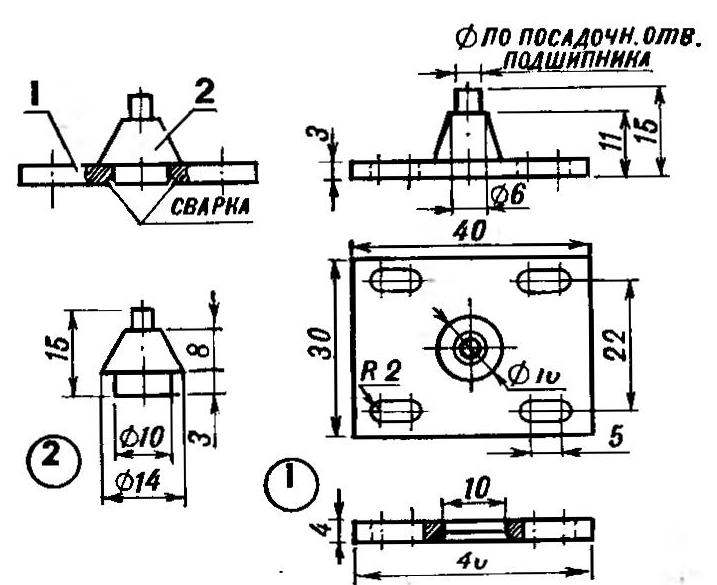 Fig. 5. Flange hinge (the bearing is not shown):
1 — base 2 — finger-axis.
This method of folding does not require labeling boxes, cabinets to the floor or to the wall (see # 12’94 and earlier publications), which is especially valuable for those “weekly” rearranging furniture. If someone seems difficult way of unfolding the bed, it is possible to offer the option of unloading the springs (or rubber buffers) also have been described previously in the journal.
if you cannot use any ready turning any node, it is easy to make your own. This applies to both the snake (the figures show two varieties: whole and precast), and the actual hinge, which has only one part requires milling — axis; it is placed on the bearing. From the latter, incidentally, depend on the corresponding dimensions of the inner window runners and the diameter of the axle at the joint. Elongated holes in the base joint are used for the final adjustment of the sunbed (in the retracted position of his legs with decorative moldings should be flush with the front edges of the sidewalls).
The supports are fastened by four screws in blind holes drilled in the sides. Almost four years of operation showed that the apparent “fragility” of this attachment is deceptive: the bed keeps even an adult, although initially calculated on the child.
V. GAGAUZ, Znamensk, Astrakhan region.