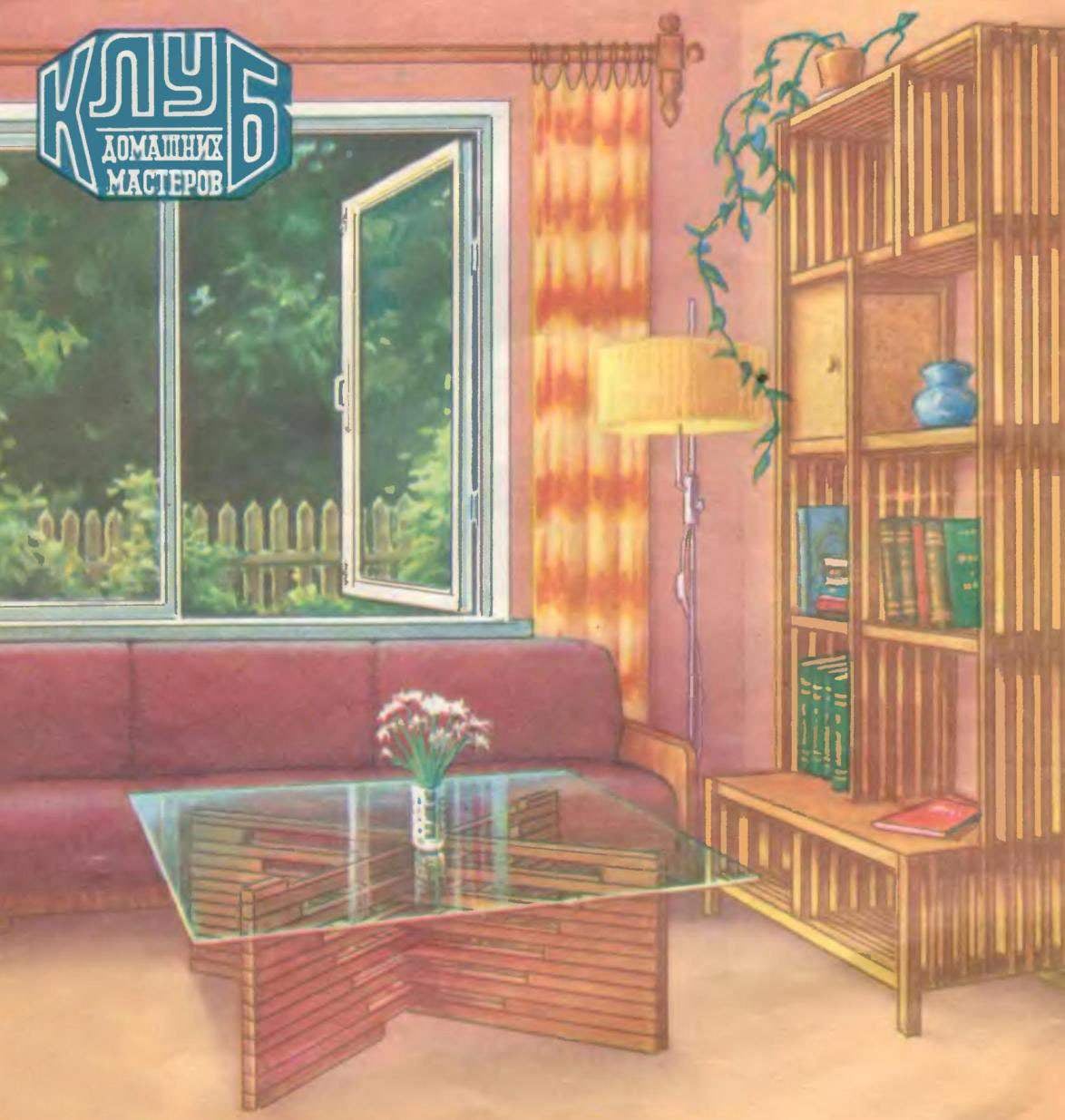 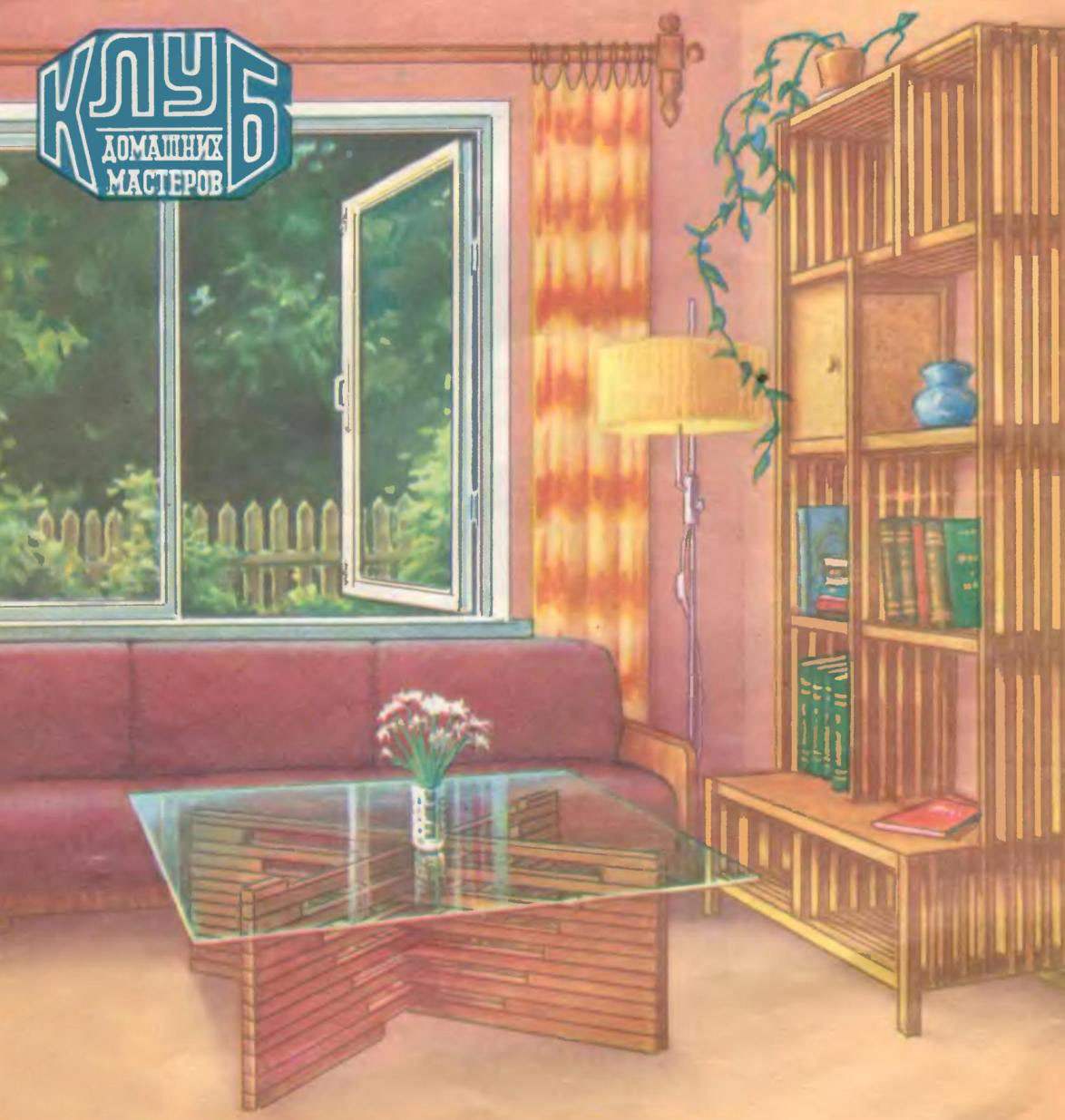 In our small apartments recently settled a combined sectional and furniture. And — please note! — the more expensive and better quality headsets, the less it pseudotolerance, pasted paper or film on top of the bones: the texture of natural wood, which for years we’ve been hiding under a dismissive fashion mixed colors plastic, again pleasing to the eye, its presence in the interior has become a symbol of good taste.
But opportunities home master d ash limited: walnut or lemon tree, not to mention the Karelian birch, in shops of building materials will not meet. Therefore, we need to find a way to show the natural beauty of wood, which at the same time, would hide the poverty of the texture of the same usual pine or birch.
Probably many have repeatedly drawn attention to how beautiful machined plastic standard “stolarna” until they sahateni hands are not smeared with paint, not pierced with nails. But the source of this excellent for home-made articles material just under the arms. It is — Reiki. Those strips, which were protected during the transportation of a newly purchased refrigerator that mountains were piled on the margins of the cable shops. For our chains fits any rail — if only Rona Yes, without large knots. It is preferable that the width and the thickness of them was at least about the same. However, it does not matter if the material does not quite meet this condition. The workpiece is easy to straighten the ordinary planed, sanded tsiklej, and sandpaper.
From such material I have produced a wall-Cabinet size 1000X1700 mm separated in the room area to relax in. One of the ends of the Cabinet large screws attached to the cement putty to the wall. A kind of shelf like friends and guests and I began to think, what else can you make using the “rack method”. It turned out that almost any item of the headset. It should be emphasized here that, depending on its functional purpose should be properly selected width and thickness of the slats. For example, stands for flowers — narrower at the tables under the TV — powerful. For bookshelf, in my opinion, the optimum size 15X30 mm. If such strips to get will fail, use narrow, just increase their number. 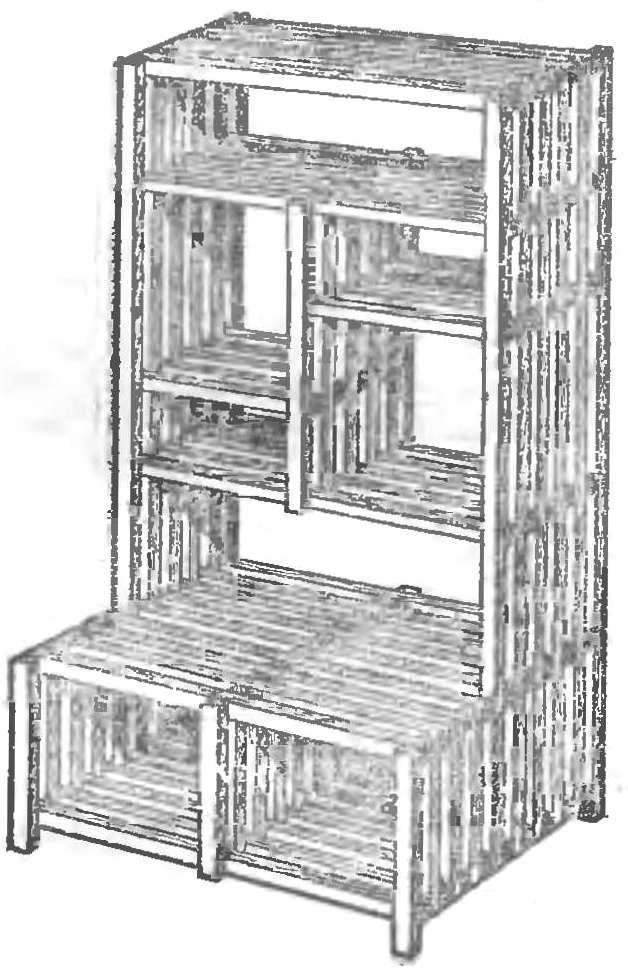 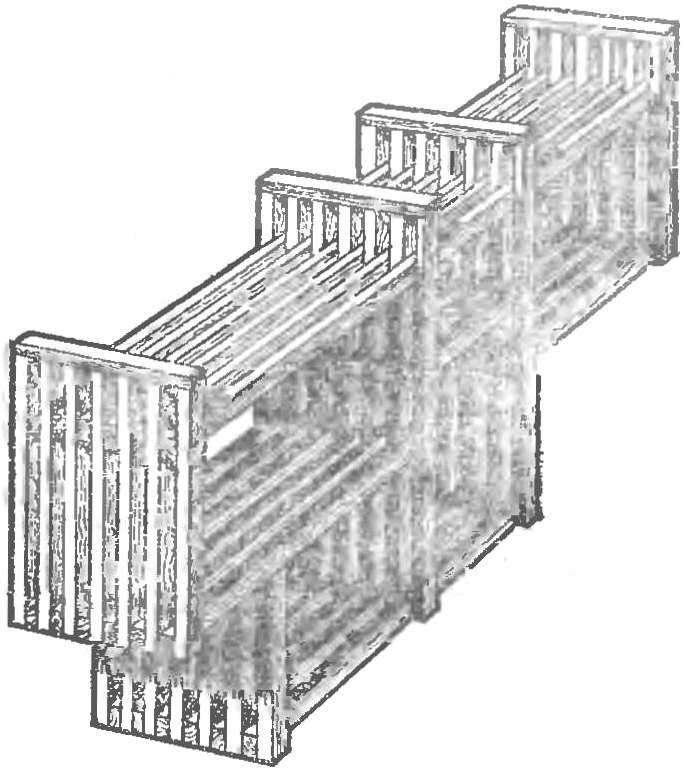 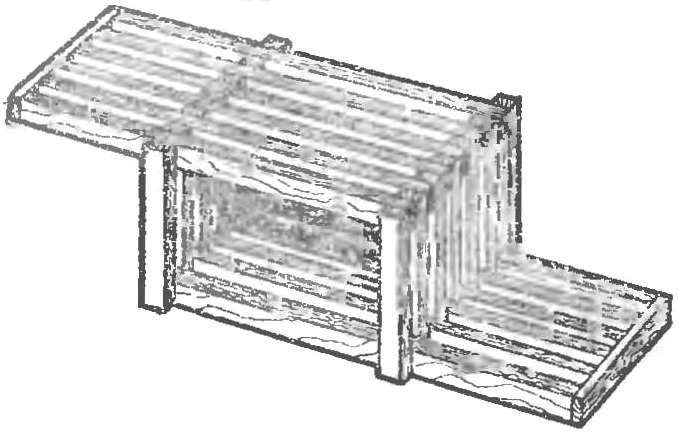 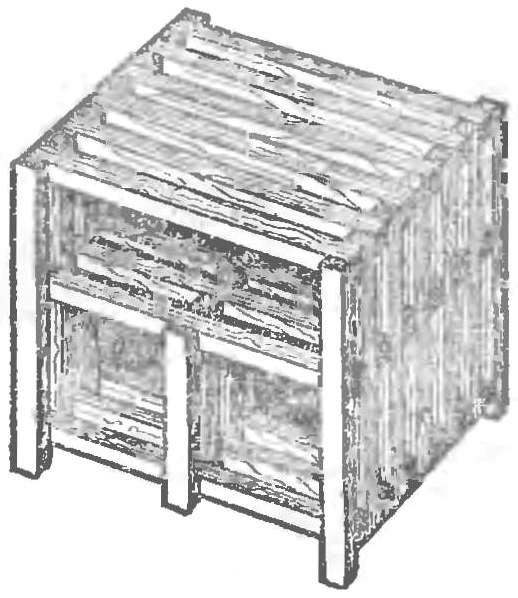 Fig. 6. Joining short strips is performed in a staggered manner.
On placed here sketches approximate schemes of various items, from rails: wall shelf, bookcase, shelf, or stand for flowers, cupboard, radio or television. The ratio of their elements can be very diverse and depend on the taste and fancy of the manufacturer and specific application.
Regardless of this, the assembling of any object is the same. First on the floor (don’t forget to protect it with newspaper, Kraft paper) lay out the front row of vertical forming, putting them at a right angle and temporarily fixing skochem. Where they overlap the horizontal strips apply the adhesive (casein, wood, epoxy, PVA), overlay slats and fasten with nails, the length of which should not exceed a thickness of two slats. The crosshairs are again lubricated with glue, they fit the rails of the next vertical row and so on until the planned depth of the package. If the existing workpiece short, their tips not difficult to fix by hiding the joints in the crosshairs.
When glued to the pack dries, the product is covered with several layers of furniture chaplain and trimmed in the usual ways. If the tree structure deserves manifestations, slats are treated with stain — this operation is more rational to execute before the build.
A. KOLTSOV, engineer, Kirov