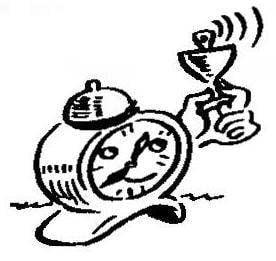 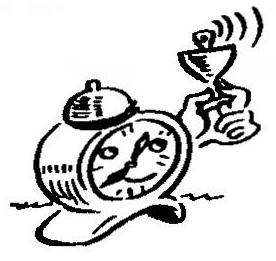 Currently, widespread electronic TRAVEL CLOCK and similar clock with a miniature buzzer as sound source — a reminder about the occurrence of the deadline. However, a small volume of the regular signal, as shown, are often not sufficient in order to Wake up, for example, soundly sleeping man.
I have also developed the connection of an external alarm that can significantly improve the efficiency of an electronic alarm clock. Collected such a device based on an Electromechanical door bell (GOST 7220-66), in addition to having a network of regular low-voltage winding for connection button, which has been equipped with electronic key transistor and relay with GER-meditirovaniya Contacts (gerco strength) in the load circuit. Moreover, the design applied in this relay is a special, so-called magnetic locking.
The fact that this device is in addition to the coil with the reed switch (see “Mode-list-constructor” No. 4’98 5’99) there is also the source of the polarizing field, the permanent magnet. Magnetodynamic force (MMF), the latter by its absolute value although not enough to trigger the relay, but it is quite acceptable to save the contacts in the attracted to each other position. In the result, there is no need for continuous current flow through the coil while holding the relay in closed condition.
The relay comes from the rather intense momentum, where MDS generated by the coil formed with the magnetic field so that the sum total exceeds the threshold of the reed switch. Then sealed contacts remain attracted to each other (closed) indefinitely without feeding energy from the outside.
For the release of such a relay requires MDS reverse sign relative to the field magnet, when the resultant force becomes less than the threshold of releasing the reed switch. This situation can be created in various ways. For example, the inclusion of an additional coil wound as in a bistable relay series RPS in the opposite direction. In the recommended structure, everything is solved much easier — by using an external permanent magnet is brought to relay.
In standby mode (when the signal from the base hours not served) the ends of the secondary winding are open and call on them there is about 12 VAC. Straighten the diode VD3 is used to power the circuit. That is, electromagnetic “filling” call works as a power transformer with half-wave rectifier in the secondary winding. 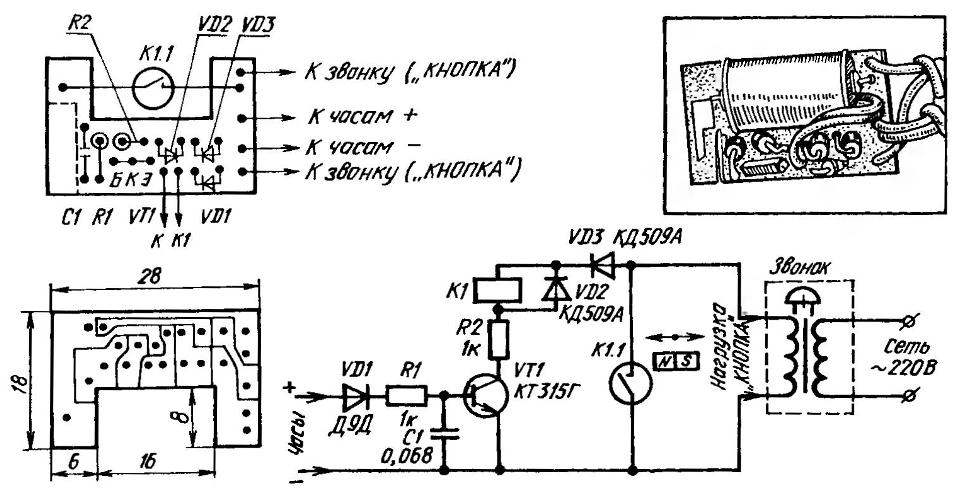 Circuit diagram, PCB layout and mounting “vociferous” prefix to the e-type TRAVEL alarm CLOCK
When the alarm goes off on regular buzzer appears the pulse voltage of rectangular shape with a frequency of about 1 kHz. Through a chain of D1R1C1 it is applied to the base /T1, thus opening the circuit of the electronic key. As a result of increased collector current of the transistor. This causes relay K1, the contact 1.1 which, like zvonkovoe button at the bottom of the low-voltage winding. And along with the weak buzzer begins regular hours of loud ringing of the door electrosonic automatically connected to this makeshift console. Well, the VD2 diode prevents breakdown of the transistor when disabling the relay coil.
With a reed relay to short circuit the input voltage of the rectifier becomes zero, which means that the circuit is actually disconnected from the power source. However, hermetically sealed contacts remain firmly attracted to each other, because to hold the relay in this condition no energy supply is required. The call will continue to ring in full until awakened until the user unlocks relay by an external magnet, causing the reed switch to the original open position.
Important note. If the signal is received from the base hours is not the end, the scheme after unlocking again starts to work. Given this fact, the user has not to rush into a magnet. To his lomew^ you can use only thoroughly waking. But such a revival will inevitably occur, as practice shows, only the completion of action long staff of a buzzer.
The scheme is not critical to the choice of the majority of the details. Diodes VD2 and VDЗ can be direct current of 30-50 mA and a reverse voltage of about 50 V (for example, КД102, КД103, КД509, KD510, КД521А, КД521В, KD522). Acceptable also КД105, D7, D226, Д206-Д211, Д220, Д223, Д310 and other semiconductor valves with appropriate parameters, however, their use entails the necessity of redoing the PCB.
Approach to VD1 stricter. It is desirable that the selected diode has a small forward voltage (e.g., was germanium, type D9). Otherwise it is difficult to guarantee reliable operation of the device, especially when a partially discharged battery base hours.
Transistor VT1 should have h 21E > >40…50,Ik max >= 25 mA, IKE max>=25 V. such parameters are, for example, KT315, KT361, КТ312, MP20, МП21, МП25, МП26, МП37А, МП37Б, МП40А. When using the p-n-p transistors should be changed to the opposite polarity as the inclusion of a diode and connecting the input device to the buzzer base hours.
Relay self-made, assembled on the basis of serial magnetic reed switch CAM-2. The coil consists of 1500 turns of ПЭВ2-0.1. It is wound on a frame made of thick paper and put on the reed switch. To create a polarizing field use small-sized permanent magnet (e.g., magnetic reed buttons).
The main part of the device mounted on a printed circuit Board, which is made in advance of the 1.5-mm foil-tion of Micarta or PCB by cutting the respective insulating grooves in the conductive layer. ULM resistors, diodes D9 КД509 and set vertically. The findings of transistor KT315 and condenser KM solder, trying not to deviate from the recommended topology. Well, when you use parts other sizes are making the fee adjustments.
The cutout on the PCB is designed to relay coil. In the place circled in the sketch by the dashed line, is attached a magnet. Correctly assembled Board is placed in the housing, which can be a plastic box of suitable size, through holes in one of the side walls displays the four flexible wire type mgshv-1.
A couple of insights running in accordance with circuit and installation diagrams to the reference clock, connected to the contacts of the buzzer with the correct polarity, which is useful to clarify well in advance with a tester. And all because the manufacturers of cheap “electronics” are often guilty of mistakes in the legend of details on their products. The true polarity of the voltage on the contacts of the buzzer is determined by the deflection connected voltmeter at the time of arrival of the sound signal from the alarm, not yet docked with the console. The very same dock, you can perform all-in-one, connecting the wires to the contacts of the buzzer, or split, for which the watch case is set microresearch, and the entrance console is equipped with microvilli (illustrations plug-fork option is not shown).
Setup of a homemade device is reduced to the selection of the optimal placement of the magnet, which find, gradually moving to the last ger-stake. At the time of “clumping” of the sealed contacts note the location of the magnet. Then slowly begin to push on far enough to open the reed switch. Equidistant from these “critical areas” and is an optimum, where the magnet is glued to the Board.
The value of the resistor R2 is selected for reliable relay operation. But we should not get involved in the search too little resistance, because it can lead to extremely large collector current when the transistor VT1.
D. VOLKOV,Shakhty, Rostov region