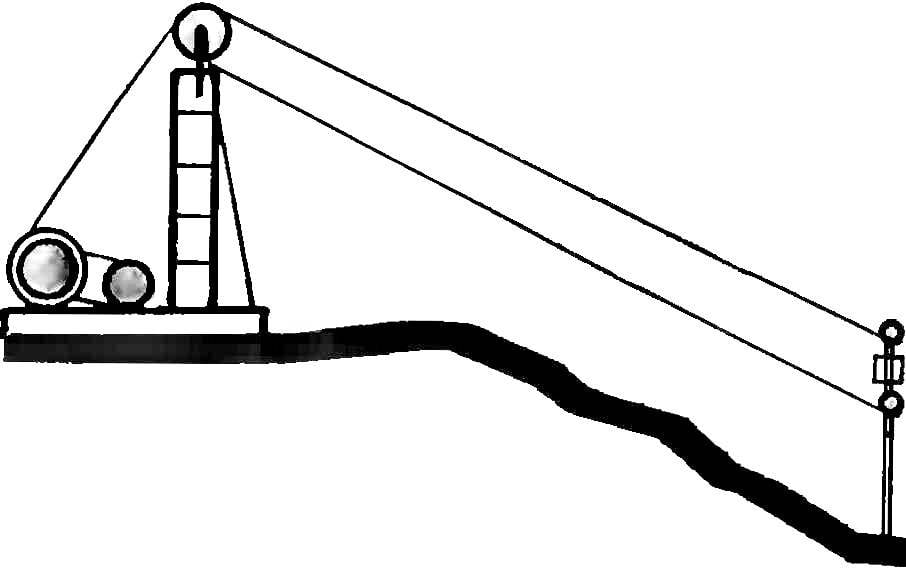 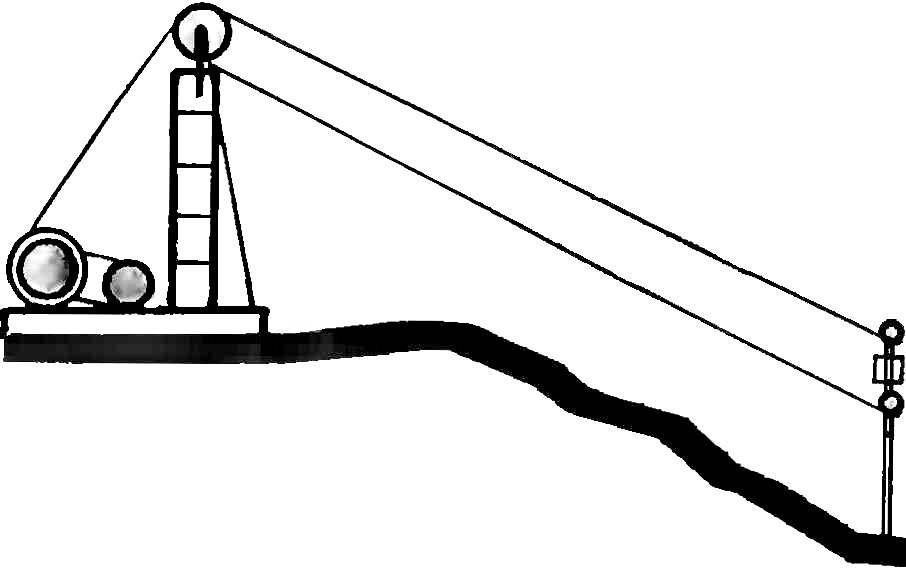 Ski sport in our country every year becomes more and more popular, they are fond of both adults and children.
It makes no sense to list all its attractive side, enough to give the characteristic of the twice hero of the Soviet Union, pilot-cosmonaut Georgy Grechko: “…First of all it’s a great focal point of all human body systems: nervous, muscular, blood. Skiing train the vestibular apparatus, develop short-term reactions and stamina, and make you strong and agile, immeasurable increase its efficiency. And of course, skiing is a real generator of good mood. Every lesson, every access to the mountain is a celebration of this joyous event which I remember and want to repeat. That’s why anyone who once got up on skis, that never again will not part with them”.
And at the same time, skiing is not only a sport, but modern technology, even a whole industry, producing a variety of mechanisms and devices — from precision measuring equipment to a special “guns” that cover the track with snow… this includes a variety of equipment of the athlete: auto mounting hard high shoes, sleek suits, hats and lastly, the actual skiing, which includes many technological advances… it is not Surprising, therefore, that every second skier — not only the athlete, but still the master and even designer.
One of the most essential types of equipment the ski slopes — the ski lifts. Without them it is difficult to roll the required miles on the snow-covered slopes — paced workouts will be very low. So today we will tell about the lift, designed by the Moscow ski club “the Seagull”. Its design is quite affordable for the repetition forces the staff of a small Amateur club.
A small ski lift IHL-300 is designed for operation in so-called “small mountain”: in a hilly and Bristol rural location on the outskirts of cities. It is designed for club numbering 100-150 people (this number is limited not by the performance of the lift, and the ability to maintain the track in good condition especially in winters).
As one of the main requirements to the lift by his extreme simplicity and high reliability, which eliminates the need of continuous duty at the final station (although the responsible person on duty on a lift at the time of his work, of course, desirable). Therefore, the proposed design can be widely used not only in the mountain sections, but also in rest homes, at the winter camp.

Map of the ski lift IHL-300:
1 — the drive station, 2 — idle branch of rope, 3 — working branch of the rope, 4 — intermediate support; 5 — bracket with tether, 6 — the bottom support.
It should be noted that in the sports club “Chajka” lifts MGP-300 successfully operated for over 15 years.
To ensure the complete safety of the lift of skiers — not less important requirement. This applied device, automatic emergency stop, triggered, for example, in case of accidental contact of the yoke, passed the barrier in the window structure, enclosing the drive station. In General, the safety of use of the lift is guaranteed even with no skills fans of descent, including children. Of course, beginners have to receive special training.
The maximum speed of the traction rope should not exceed 3 m/s. long-term practice of operation of lifts confirms that at that speed, the start is not difficult even for children. The distance between the skiers is rising about 10 m, which corresponds to the interval of time 3…5 s. This is sufficient for uncoupling the cable and the release end of the track.
The drive station of the lift is a team of the construction of channel and angles, consisting of a base, uprights and struts of the ladder. 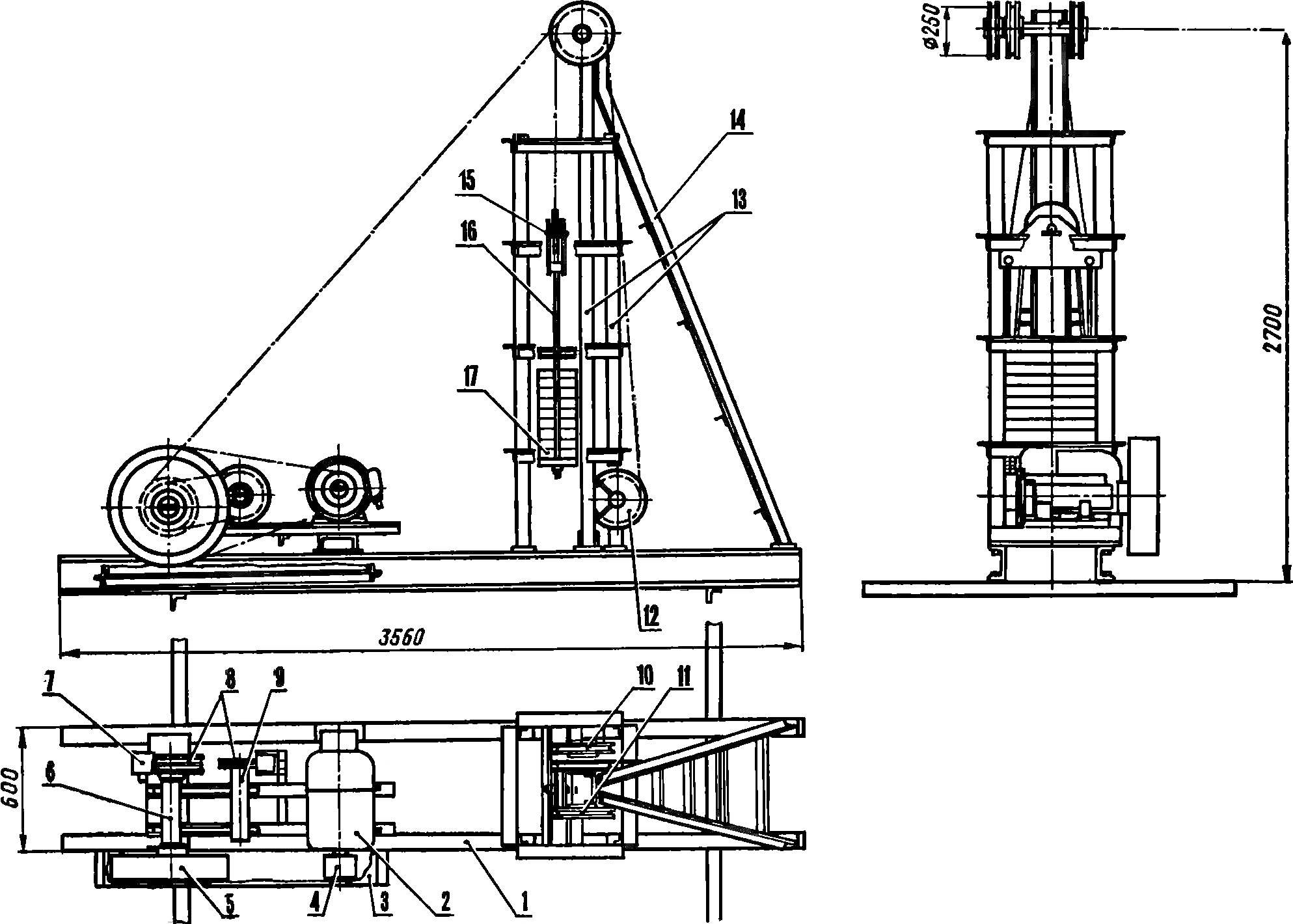 The drive station:
1 — frame, 2 — motor, 3, 7 covers 4, 5 — V-belt pulleys, 6, 9 — rope drums, 8 — rope pulleys, 10, 11, 12 blocks, 13 — vertical racks of a skeleton mast, 14 — strut 15 of the clip unit truck tensioner, 16 — terminal cargo clips 17 — weight (concrete blocks).
On the base is an electric motor with small pulley belt transmission, the drive shaft of the drive station with a large pulley belt transmission and paired the two leading pulleys traction rope. Also located on the frame blocks to Spasovka rope, the input, bypass and output blocks and the yoke for the suspension of suspended loads. V-belt transmission and zone Spasovka rope covered.
In case of difficulty with supply of power lift IHL-300 can be implemented with an internal combustion engine, for example T-200M (with a capacity of 12 HP), with forced air cooling. The engine is mounted on the mounting space of the motor, and shaft lift instead of pulley installs sprocket of the chain transmission. The engine has the ability to move for chain tension. The gear ratio of the chain drive is selected so that at rated engine rpm speed rope in third gear was about 2 m/s, and the fourth 3 m/s For economical fuel consumption the lift is equipped with automatic adjustment of gas: when pressure increases throttle opening of the carburetor of the engine — the system goes from idle to working speed.
It should be noted that when using the electric is easier to provide an emergency stop of the lift, placing as required the emergency stop button at the beginning, middle and end of the track lift. However, using the internal combustion engine increased mobility lift: if necessary, it easier to move to a new location.
An intermediate support is required at great length or in complex profile of the track. They set the upper roller serves to support the return path, the rope, and lower work roller designed for leading branch. The bottom roller is located on the swinging suspension, which eliminates the possibility of sliding of the rope in case of accidental spurts.

Intermediate bearing:
1 — high roller, 2 — top frame, 3 — swinging pendant with the bottom roller, 4 — bracket 5 — front supports, 6 — rung of the ladder.
The lower beam is used for the suspension bottom return block lift, is a swinging rack with holes (for adjusting the height of the suspension unit) and a telescopic brace-strut of the two pipes entering one into another. 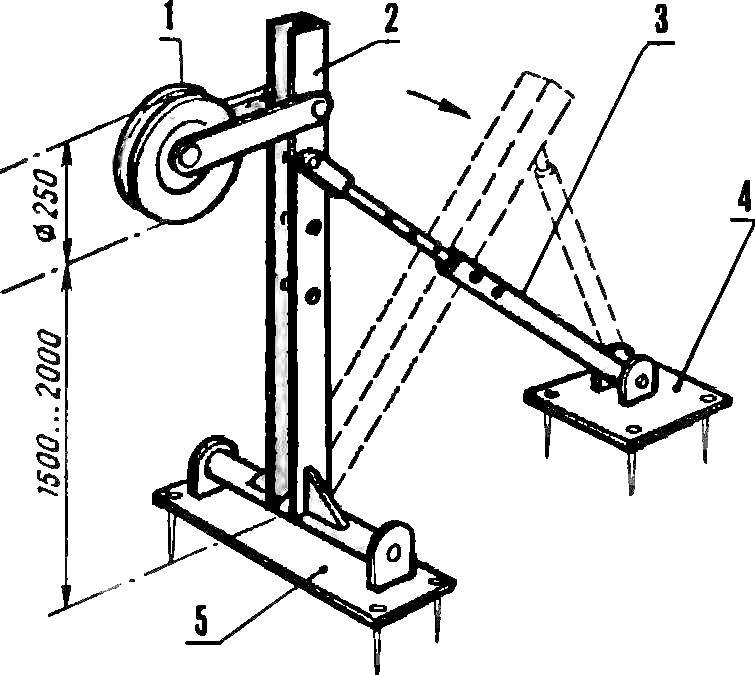 The lower support:
1 — unit, 2 — front suspension, 3 — telescopic strut, 4, 5 — base plate.
As can be seen from the figure, this design allows, within certain limits, to choose the excess length of the traction rope when the hood is in the process of exploitation, and to regulate its height in the place of “landing” on the lift. The lower support for security purposes, closed by a fence. 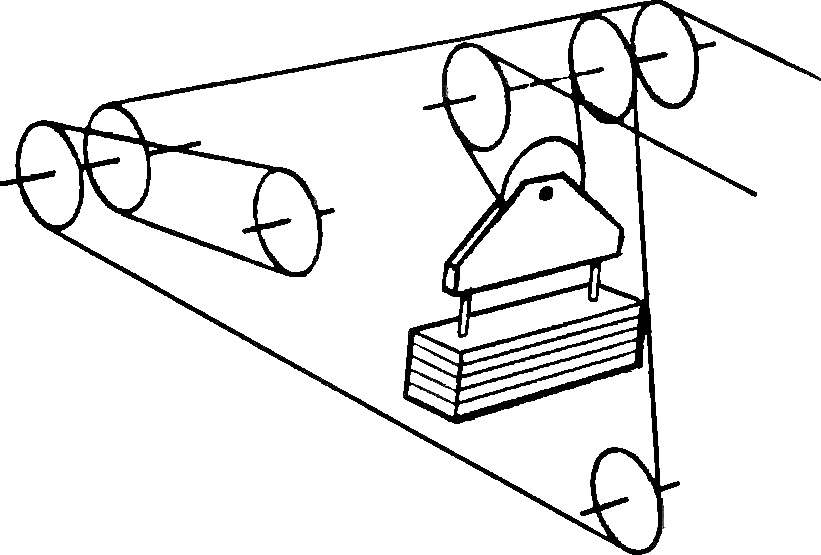 Scheme zapakovki cable.
Yoke — individual type, with brass or bronze head, ensuring the safety of the rope, and the ease of engagement and removal. Practice has confirmed the high reliability of the clutch yoke with the cable in any terrain chairlift. 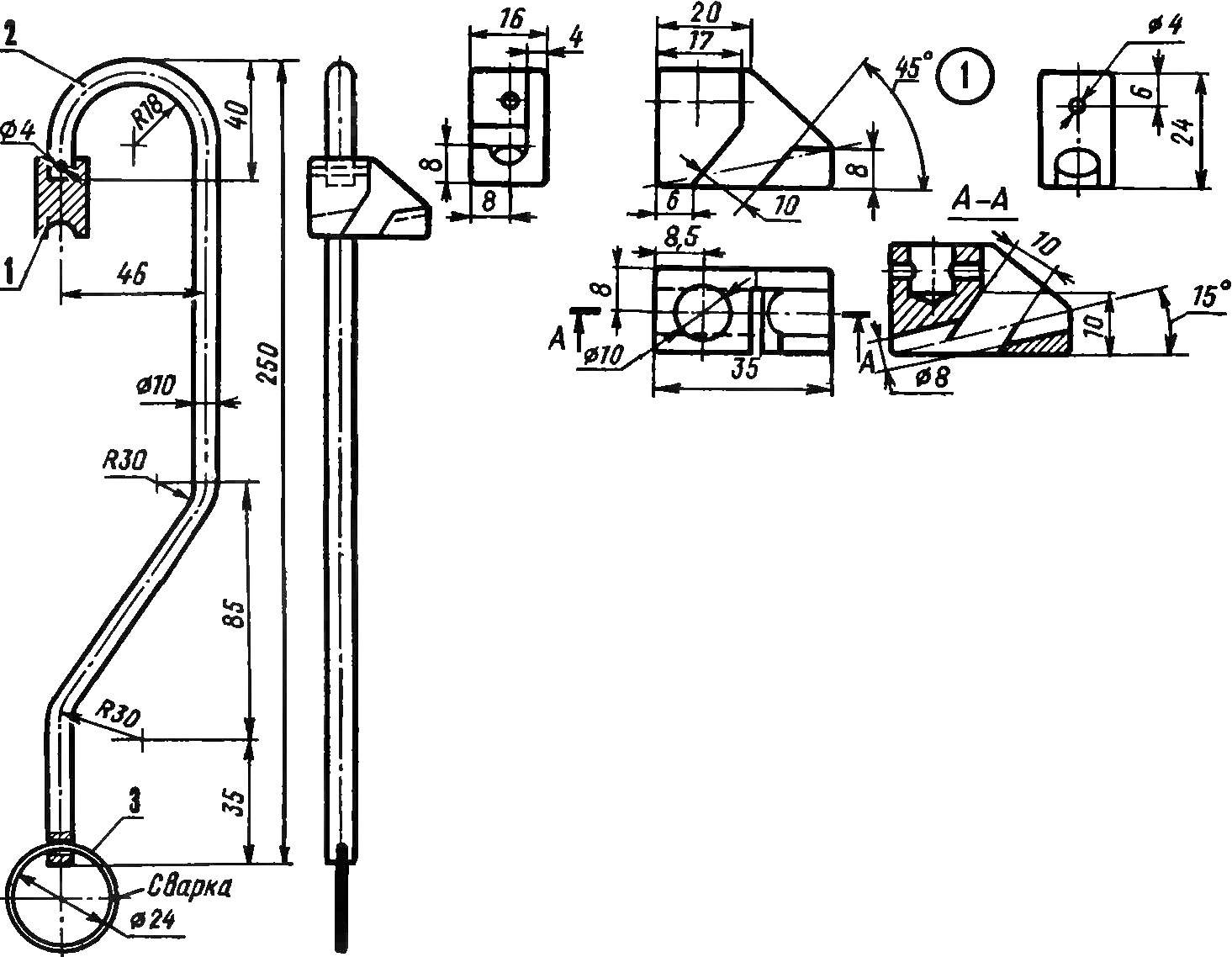 Yoke:
1 — top of head (brass) 2 — bracket (steel 45, kalit), 3 — ring (steel 3).
As the tether for yoke is normally used a canvas strap.
The scheme of automatic control of the throttle valve of the carburetor of the engine of drive station:
1 — drive pulley (or sprocket), 2 — the position of the belt (chain) at a high load, the 3 — position of the belt (chain) at low load, 4 — roller, 5 — swinging lever-Adjuster, 6 — driven pulley (sprocket).
The lift calculation is performed individually for a specific track. For example, if you want to raise the skier at a height of H=55 m at a length L=150 m and average angle of rise α=20°, it is possible to recommend the engine from the cargo scooter TGA-200 “Ant” (power NMOT=12 HP at 5200 rpm with forced air cooling and four-speed gearbox) or a motor of similar capacity. NYM-cooled and four-speed gearbox) or a motor of similar capacity. Then for a given rate of movement of the rope in third gear V=2 m/s, the efficiency of the lift η=0.8 and an average weight of the skier P=70 kg S effort to lift one skier will be:
S=FTr+T, (1)
where FTr is the sliding friction force of the skier, T is the tangent component of the weight of the skier.
FTr=f*N, (2)
where f is the coefficient of friction of skis on snow (f=0,035), N — normal component of the weight of the athlete.
FTr=0,035*70*SOA=2.3 kg;
T=70*sinα=of 22.68 kg, then S=of 22.68+2,3≈25 kg.
The tractive force of the engine F is equal to:
F=75*NMOT*η/V=75*12*0,8/2=360 kg. (3)
The maximum number of skiers n, at the same time raise lift:
n=F/S=360/25≈14 people.
The minimum distance I between skiers:
I=L/n=150/14≈11 m.
The rise time t:
t=150/2=75 C.
The performance of the lift:
Q=3600*n/t≈670 person/h.
Thus, the performance of lift even at such low speed movement of the cable (and consequently small installed capacity) are very high and will satisfy the needs of the club.
In conclusion, lift IHL-300 does not contain scarce parts or materials. Technological operations in its manufacture are of minimal complexity and can be made on the simplest equipment. And arbornet design provides the possibility of transportation and installation of lift by a small group of people.
Technical description ski lift IHL-300
Engine power: 5,5…7,5 kW
Maximum towing speed: 3 m/s
Track length: up to 500 m
Lifting height (elevation): 80…100 m
The traction rope diameter: 8-9 mm
Performance (average): 600 UPS/h
The number of intermediate support: 3…4
Maximum braking coasting of cable: 1 m
N. SHERSHAKOV, a member of the mass health Commission of the Federation of ski sports of the USSR