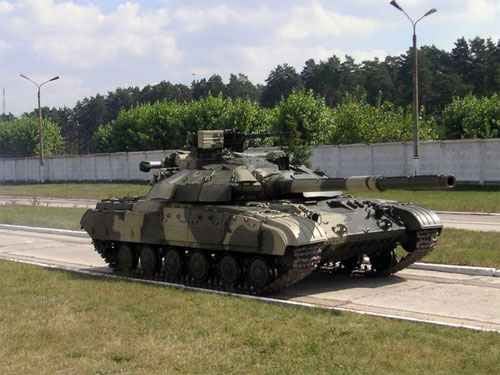 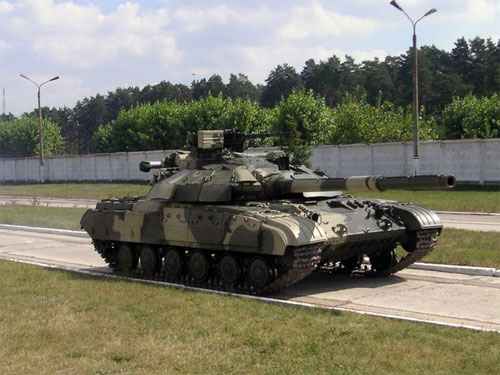 The Soviet T-34 tanks (recognized as the best medium tank of the Second world war) and KV (former the strongest in the world up to 1942), was a landmark armored fighting vehicles, pointing a way forward in post-war tank. German Colonel General Heinz Guderian in his books about tank operations in world war II appreciated the outstanding performance characteristics of the “thirty”: “In October 1941, I have described the advantage of the T-34 in front of our Pz.IV and resulted in conclusions which were to affect our future tank”.

No less important milestones towards the creation of Soviet armored vehicles were: the average T-54 -“the head” of the first post-war generation and T-64 – “the first tank of the second generation.” Foreign military experts pointed out: “T-64 Tank challenged NATO tanks 1960-1970-ies and could set the tone on the battlefield. This tank was a surprise, like the T-34 during world war II… Thanks to his appearance increased the capacity of the Soviet Army. This machine affects him today.”

By the early 1960s, the military command of the Soviet Army came to the conclusion that the disparity between the tanks of the first postwar generation the new requirements of warfare. In front of the Kharkiv design Bureau No. 60 at the factory No. 75, by A. Morozov, the task was to create a completely new medium tank with powerful weapons, but a high level of protection and performance.

In 1960, the design Bureau created an experimental model of the “object 430” classic layout scheme with the location of the engine compartment in the stern. Housing welded from rolled armor, had a Board with only niches, the front face sheet thickness up to 120 mm with trihedral angles, the bottom -mine trough. 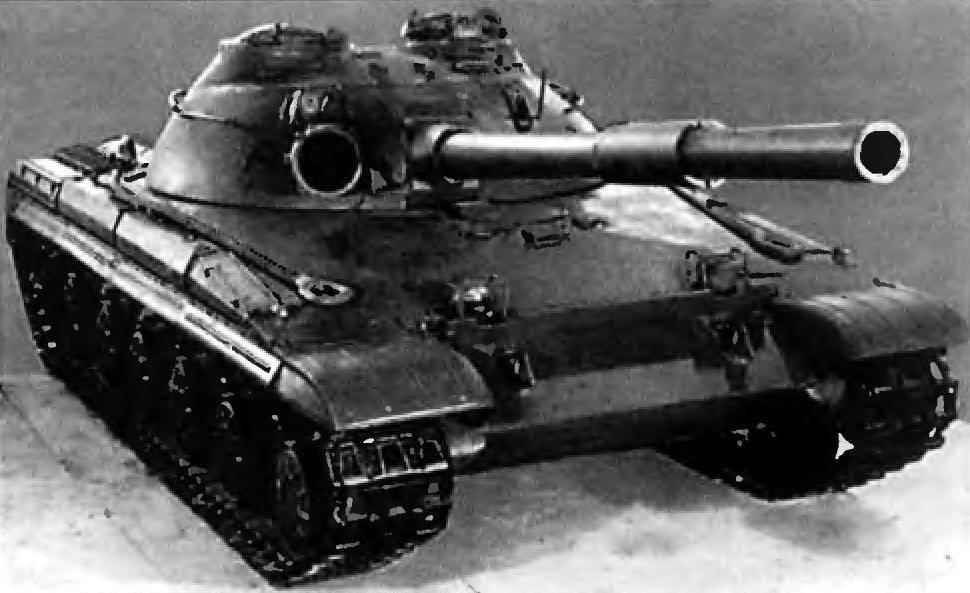 Spherical tower it is cast with welded roof, with two turrets on the left and commander on the right – charging. Both had a rotating top with hatches. One turret was mounted devices tank commander, a turret anti-aircraft guns. The thickness of the frontal part of the tower – more than 260 mm, Board – to 200 mm.

The power plant of the tank was supplied with 5-cylinder two-stroke diesel tarnopolskiy 5ТД output of 600 HP, which had a horizontal opposed cylinders. It is possible to reduce the height of the engine to nearly 600 mm, which along with cross its location provided a relatively small height of the housing of the machine itself. Service system was located over the engine, forming a second tier of branches.

In the transmission of the tank put two planetary gearbox with bilateral PTO from the engine. The chassis on each side mounted six rollers of reduced diameter, steel, with cover made of light alloy, and three supporting roller. Torsion bar suspension – individual internal torsion bars located inside the body. The first and sixth suspension units had hydraulic shock absorbers.

The tank was armed with 100-mm rifled tank gun D-54ТС with ejection device, a two-axis stabilised system “Blizzard” and provided with a mechanism for ejection of spent cartridges. The initial velocity of the projectile was 1015 m/s; he punched at the distance of 2000 m armor plate with a thickness of about 160 mm. Auxiliary armament – two machine guns of 7.62 mm – coaxial and course and even anti-aircraft 14.5 mm machine gun KPVT. To improve the accuracy of shooting mounted day sight-rangefinder TPD-43 and non-stabilized night sight TPN-1 with infrared illumination.

On the tank there was a system of collective defense of the GROOVE with an anti-radiation lining and the supercharger, an automatic system PPO, OPVT, reusable system TDA.

The crew consisted of four people, three of them were in the tower.

It was made only five cars of the “object 430”. Two of them are for factory testing, the other three for field acceptance.

17 Feb 1961 NTK gbtu MO gave KB No. 60 tacticities new requirements to improve the “object 430”. They included the greater firepower of the tank by installing it on the 115-mm gun with the loading mechanism; improvements in anti-nuclear and anti shaped-charge protection of the machine, increase its maneuverable qualities; it was also stated that the combat weight was not to exceed 34 tons, and the number of crew – three people.

By 1963, on the basis of the “object 430” has been constructed, has received index “object 432”, embodied these requirements. In October of the same year from the conveyor of the plant. Malyshev in Kharkov, down the first production samples. By September 1964, it was made 54 units, by December 1965-218.

Made military machine test successfully passed, and January 2, 1967 by order of the Minister of defence of the USSR T-64 tank (“object 432”) was adopted.

The T-64 was a straight sloping front plate, a direct roof of the enclosure. The tower is cast with a multi-layered booking with thickness up to 600 mm. Engine 5TDF turboforexrobot with ejection-type cooling system, forced up to 700 HP In the drivetrain installed two seven-speed planetary gearbox that allowed for the 750 kg to facilitate its construction. Undercarriage track rollers used of aluminum alloy and a new caterpillar. 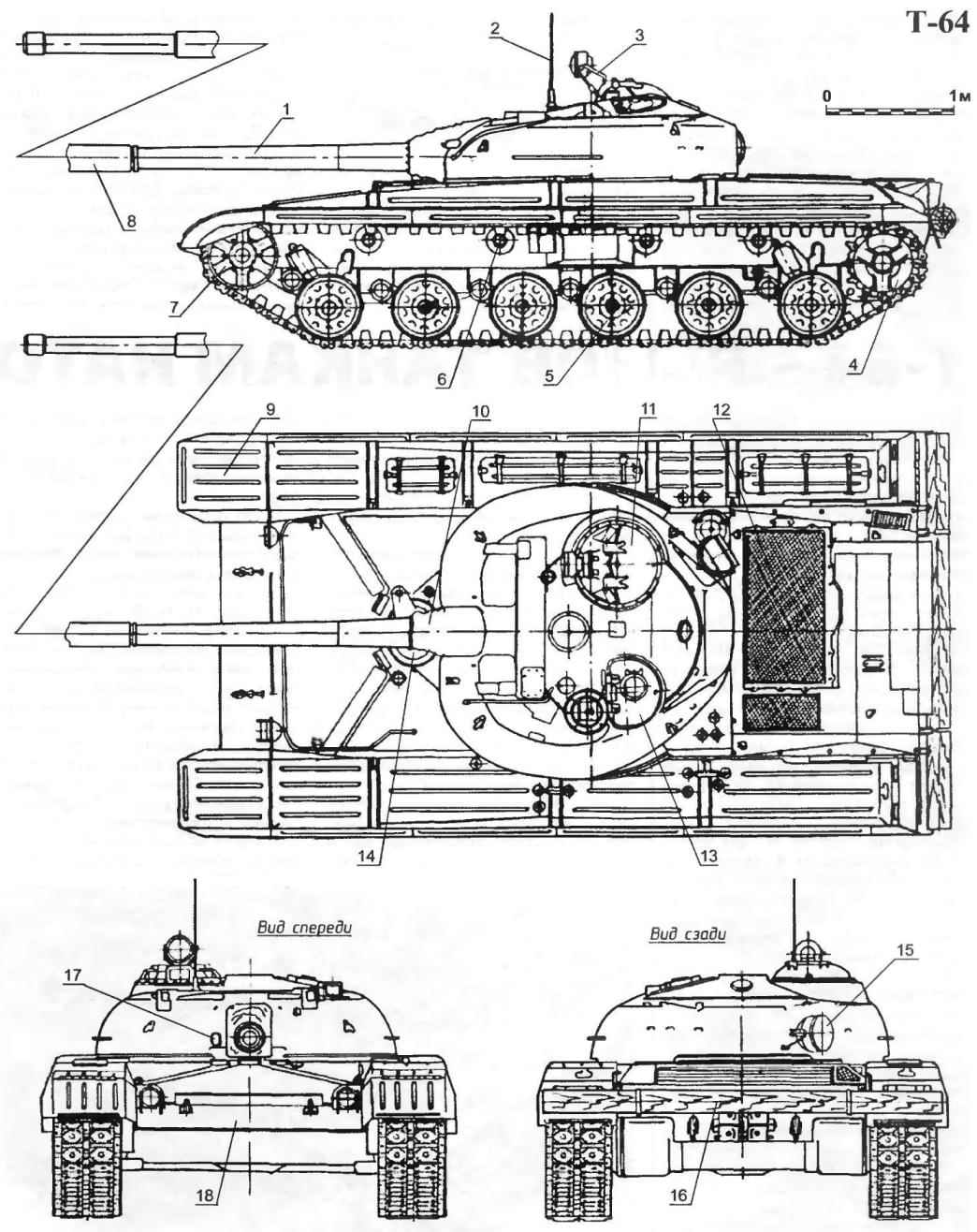 T-64 was the basis for the creation of the Soviet tanks of the second post-war generation.

MODIFICATION OF THE T-64 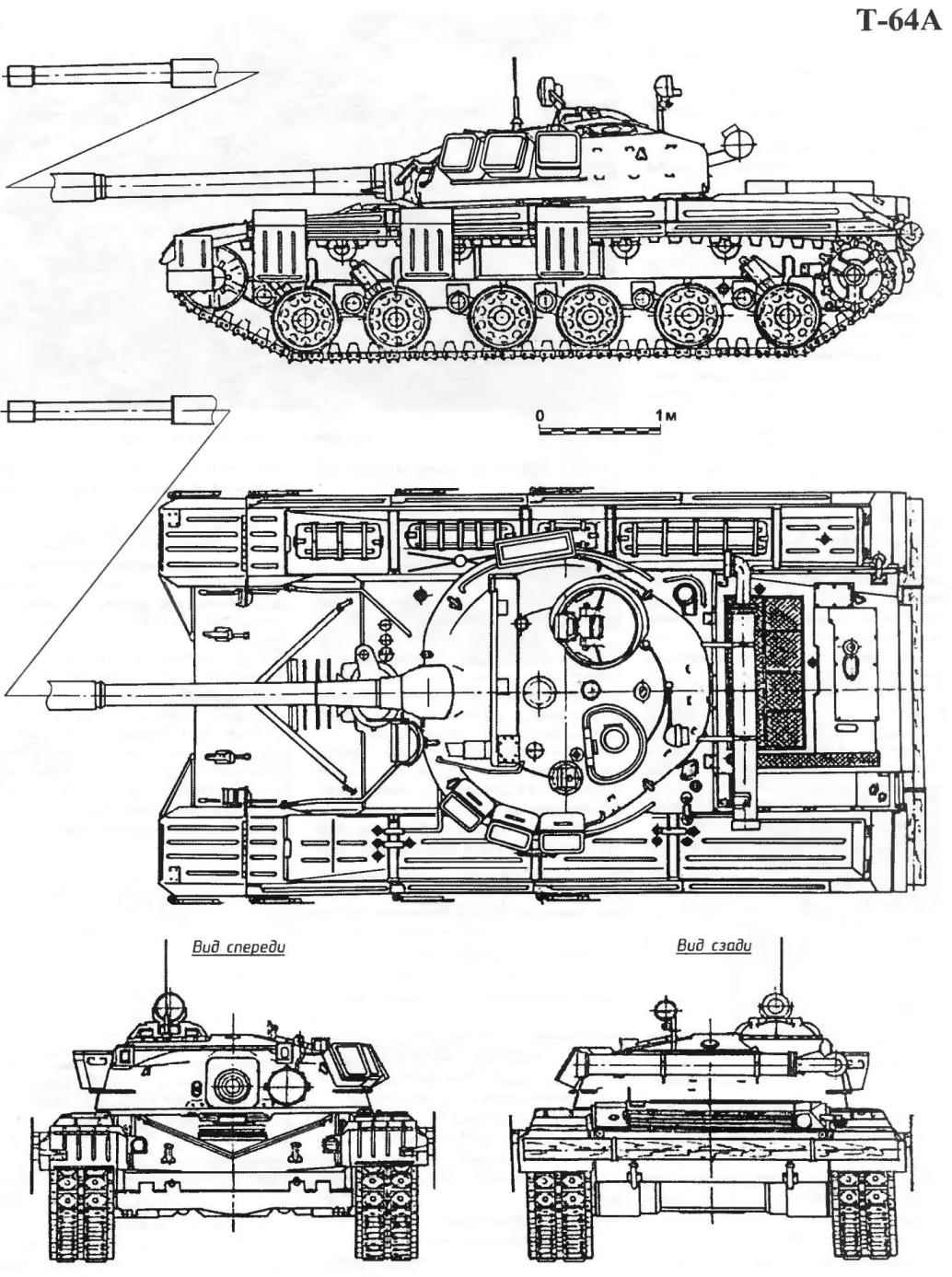 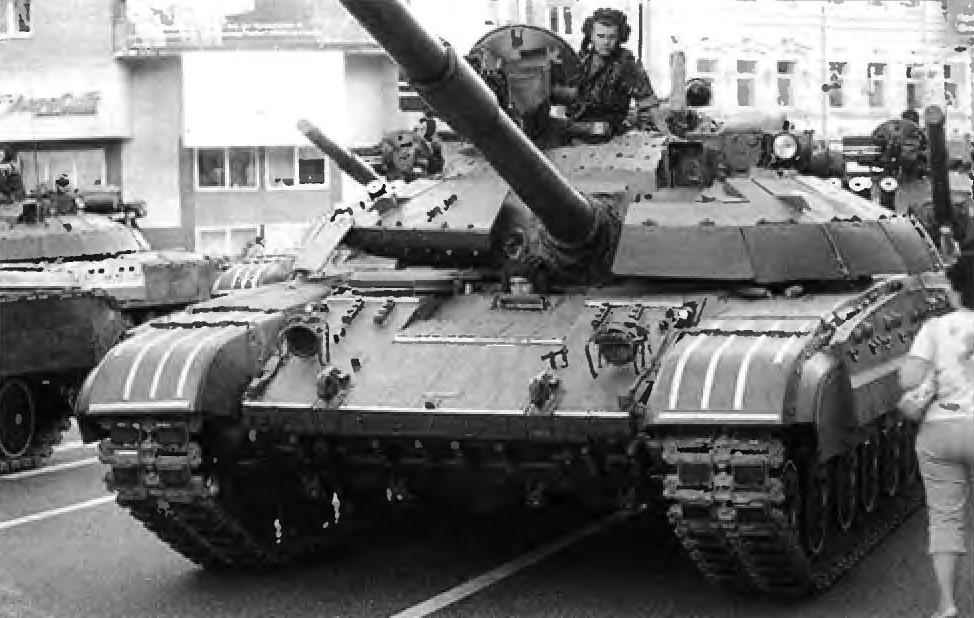 T-64B (“object 447А”, 1976) is a modification of the T-64A. Differences: the set of guided missile weapons “Cobra”, the new MSA 1АЗЗ with a sighting system 1А34, the system of protection against Napalm, the system start-up smoke grenades “Cloud”, increased booking hull and turret, solid side screens, an increase in the dynamic travel of the rollers.

19 APR 1968 joint resolution of the CPSU Central Committee and USSR Council of Ministers “On creation of gas turbine propulsion for objects of armored vehicles” SKB-2 at the Leningrad Kirov plant was instructed to create on the basis of tank T-64 a new car with a gas turbine power plant. To develop the engine itself was also aeroengine Leningrad NPO. Klimova. It was necessary to construct a new type of tank installation – gas turbine to that used in aircraft and shipbuilding.

Gas turbine engine (GTE) promised distinct advantages over diesel – the same amount to get much more power. This would allow the tank to achieve higher speeds and to significantly increase the maneuverability on the battlefield, to improve the management of the machine itself. 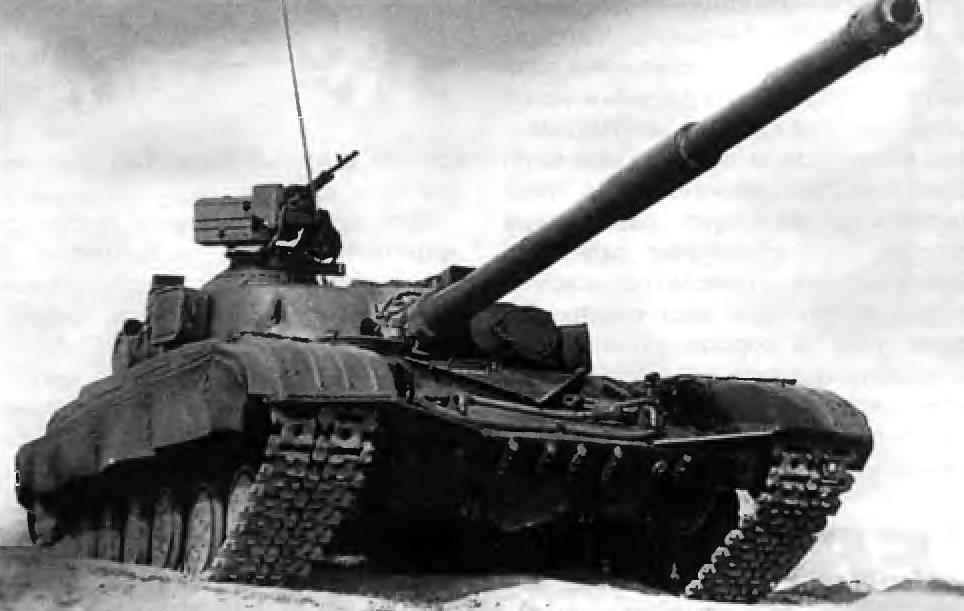 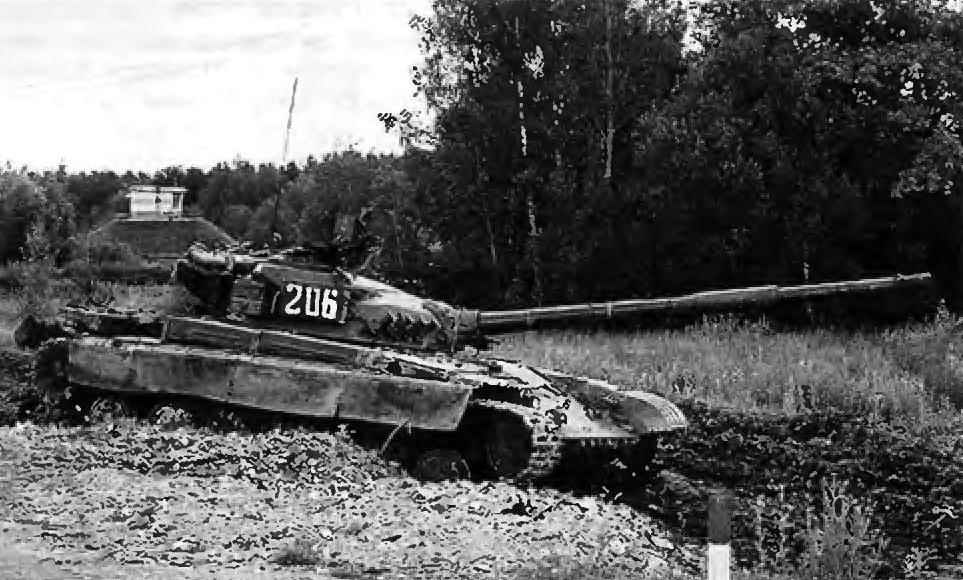 The T-64 to the test on rough terrain. Central Russia

Experience in the application of GTE Soviet tank builders already had, especially at the Kirov factory. In 1948 here in SKB turbine production under the leadership of chief designer A. Starostenko was the project of a heavy tank with this engine, but it remained on paper. When in 1955, the Kirov plant had to develop a new heavy tank with an engine of 1000 HP, weighing up to 55 tons and with 130 mm cannon, began to conduct work in two directions: developed the options and a diesel engine (“object 277”), and GTE (“object 278”). Two prototypes of the GTD was designed under the direction of G. Ogloblina.

In 1957 on the LB was made for two experienced gas turbine unit GTE-1 “object 278”, created on the basis of tanks And C-7 and T-10. They had to provide a sample weight of 53.5 tons speed in excess of 57 km/h. But soon all the works relating to heavy tanks, in our country, under direct order of the government ceased. “Object 278” finish failed. Still looking in this direction at the factory continued. In the 1960s, for example, tested “object 288” on the T-64 helicopter with two turbine engines GTD-350 power 350 HP each.

The basic data of a family of tanks T-64

In 1969 the first tank of the Leningrad Kirov plant with a gas turbine engine in accordance with the requirements of government decree of 19 April 1968 was made. This pattern known as “object 219” based on the T-64 with GTD-1000 capacity of 1000 HP, developed at the NPO. Klimova. However, the installation of a powerful engine, increased weight, increased requirements for dynamic characteristics is made to make substantial changes in the machine construction, especially in suspension. Had to design new absorbers and torsion bars, guide rails and drive wheels, rollers, even the tracks with rubber tracks. The tower gave a new form to streamline its configuration. But kept the weapons, autoloader, ammunition, instruments of guidance and monitoring etc. in a Word, the machine, “while retaining the basic structural and layout characteristics of the predecessors, the fully could be considered new.”