Capacity pipes through their joints is a matter that must face not only the professionals who build and service pipelines. Many homebrew, rural residents, gardeners-gardeners are forced to do such work: one for some designs, others — for various buildings, and some for water.

Classic connection pipes — welded, and threaded, socket weld, most commonly used by professionals, are often impossible to perform in country conditions or in the farmhouse — there is no welding machine or rolling-threaded tool. If you need to build a watering system, such unfortunates can still use the same archaic method — the ends of pipes to connect lengths of suitable rubber hose, cementing their wire twisting. And to ensure, for example, hand watering from a household pump or low pressure trunk, these pipe connections are quite reasonable. For systems of high pressure (not to mention the use of such tubes in the power structures), they are not suitable. You have to look for other more reliable ways of connections realized in the same conditions.

And there are such options. They are a bit more complicated than connecting pipes hoses, but they can be implemented, having at hand the most common locksmith tools: hacksaw, drill with the appropriate drill bit and a file.

The most important joints in water systems. They require a complete seal. To produce such a joint of require materials: cut thin-walled tubing for bushings with an external diameter equal to the inner connecting pipe length and 3-4 in diameter, and a little sealant. The bushing can be steel, aluminum and even plastic. To reduce turbulence of fluid flow in the sleeve need to take a deep gently sloping internal bevel.

The oblique variant of the joint using a sleeve length of segments connecting the water pipes:

Will need another bolt (with a length slightly greater than the outer diameter of the tube D, and a thickness of about 0.2 D) and three suitable washers: two hard rubber and one steel.

A certain complexity in the preparatory work represents the cutting ends of each of the joined pipes is strictly the same angle (45°). But the required accuracy of this operation can provide the device, called the carpenters mitre box (sawing tray), which you can make from readily available materials and most. If the fabrication of the devices is impractical due to the small number of joints, after sawing with a hacksaw mating slanting end faces of the pipes will have to be carefully adjusted to each other with a file.

Another challenge drilling diametrically opposite (opposite walls) of coaxial holes in the ends of the connected pipes and the sleeve. It is best to perform this operation simultaneously on joined parts. The difficulty here may occur when drilling holes in the ceiling (at the ridge) of the pipe. The drill in this case is in the position of “unstable equilibrium” and will tend to slip even from the deep core. To avoid this, it is advisable to cut a file on a ridge pipe flatted a width approximately equal to the diameter of the circumscribed circle of the bolt head. Making a center punch recess, it is possible to drill a hole in the flat parts. Lyska subsequently will serve one in good stead — it will provide a snug fit to the pipe the entire surface with a rubber washer pressed against the shoulders of the bolt head, which tightly closes the hole. In addition, after the drilling of parts of the same flatted to do around the hole from the back side on the ridge of the other connected pipes. 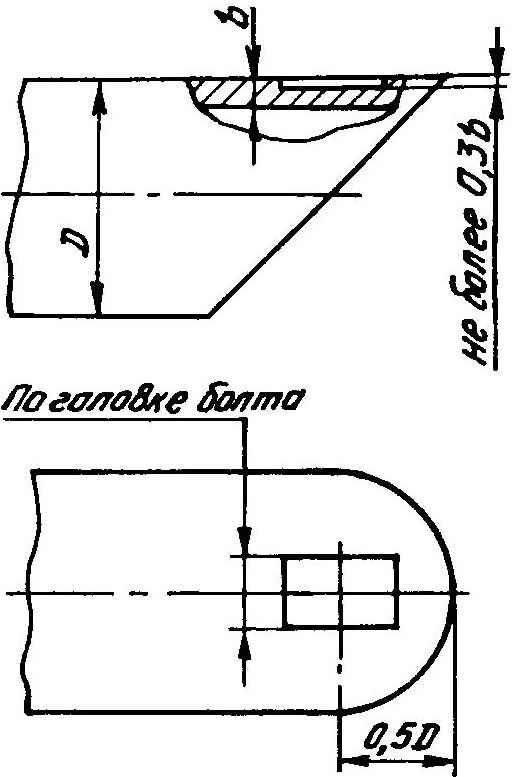 The flats on the tube

If for some reason at the same time the hole in the joined parts to drill is not possible (short drill, there is no reliable striker), this operation will have to be separately on each detail. Then the holes in the tubes can be drilled from the inside — drill in this case will be in the position of “stable equilibrium”. After that, inserting the bushing in the tube and docked node, the holes in the pipes, as for the conductor, it is possible to drill” and the holes in the sleeve. The drill diameter should be only slightly larger than the diameter of the shank of the bolt.

The bolt also has the sense to elaborate. First, at the end of the thread to make the chamfer bigger then the bolt will be easier to insert into the holes. Second, to greatly diminished flow area of the pipe, to make the flats on both sides of the rod bolts to about half the radius, in that part which falls in the penetration hole of the sleeve. For the subsequent orientation of the flats of the rod along the axis of the pipe on the bolt head it is necessary to apply the appropriate risk.

Before final Assembly on the outer surface of the sleeve and the beveled ends of the pipes it is necessary to apply a layer of sealant.

Oblique junction, you can apply for extension of pipes used in various designs even as the power of the elements: bars, beams, consoles, etc. (except the columns), only the liner must be of steel and of wall thickness not less than that of the pipes. To do the flats of the bolt is not necessary, and sealing the joint too. 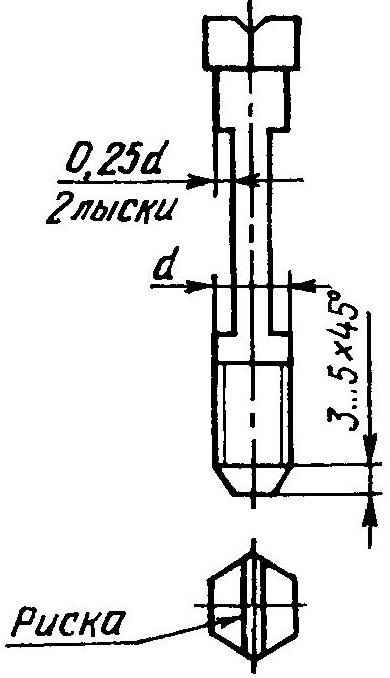 The oblique variant of the joint without sleeve: 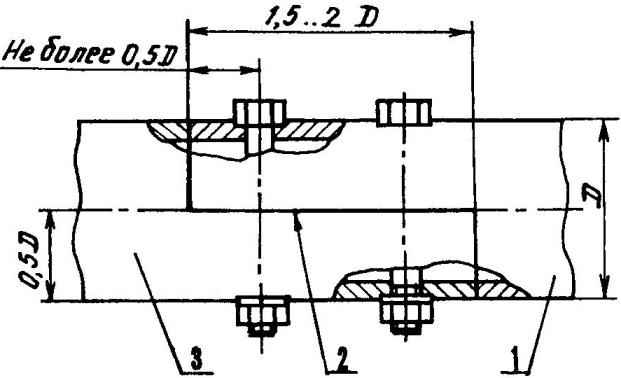 In the second variant eliminated the bushing, but added the second connecting bolts (both bolts without flat). The angle of the abutting ends of the trim changed from 45 to 30°. The technology of fabrication of this variant of the junction is similar to the previous one. But to secure pipes together at the beveled end face of one of them to leave a small tooth, making at the end of the other tube of the response groove.

When connecting pipe sections to the uprights is better to use a stepped joint. The technology of its execution is the same, only cuts of the joint produce of the axes of the pipe sections and perpendicular to them. A stepped joint is used for connection of pipe segments in the same beams, girders, consoles. But for high-pressure water it will not work — even with a grommet and sealant it can not provide integrity.

These methods (skew and stepped joints) can be linked not only round but also rectangular tubes and square sections.

Even if the pipe is connected by welding, the joints still advisable to make oblique. In this case, for example when bending the welded part (the most dangerous kind of deformation), the voltage at the junction will be partially redistributed in the body of the pipe.