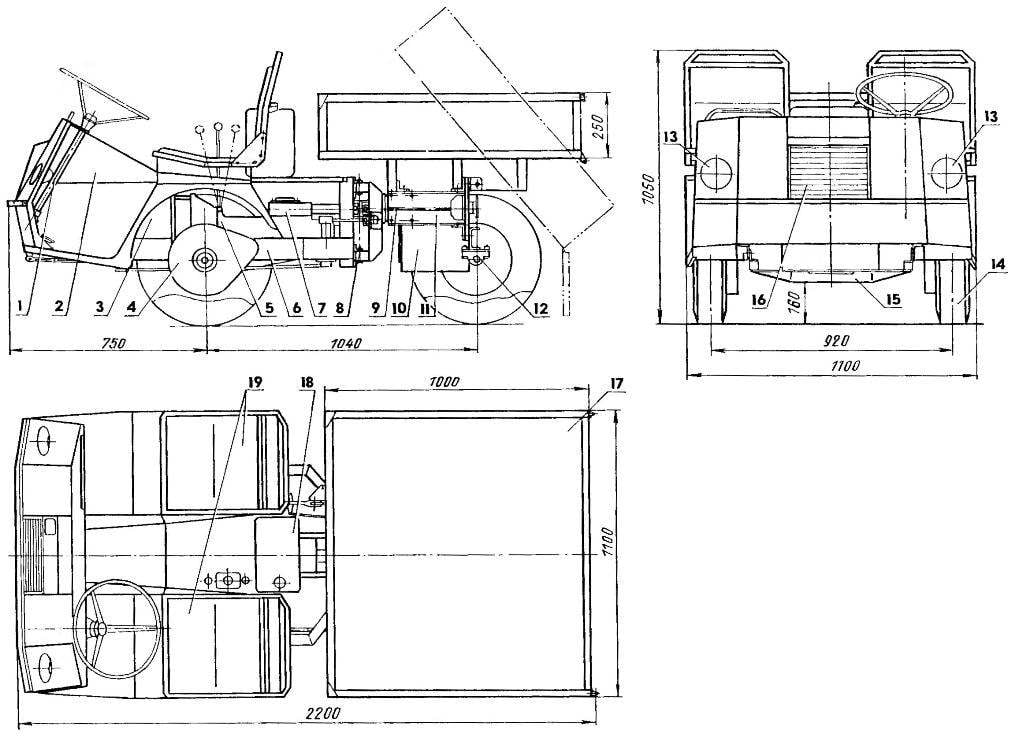 The constructor of this truck — Eugene N. Evsikov already familiar to our readers for the publication of “Plows, carries and even sawing” (see “modelist-Konstruktor” No. 5 for 2002). In the article they talked about made them little tractor. Now we present another one of his car — mini truck.
Evgeniy N. — senior designer with 40 years of experience of the famous helicopter plant. Mil. Designed and built an electric truck is under be the rotary-wing machines — reliable and practical. In addition, it reviewed the simplicity and accuracy that ensured consistency and quality of execution of each node. The first time the photo of the mini-truck was published in the “Model designer” № 6, 2002, under the category “Panorama photos of readers ‘letters”.
What cars and trucks did not create domestic designers and designers, from chic “front-away” limousines to the “ascetic” sport buggy, from heavy draught horses to the rapid “gazelles”.
However, machines for the farm, so to speak, prislonnyh is a small, simple, reliable and inexpensive that it is not visible. Fit the constructors for these purposes, “Jiri”, “Muscovites”, “Lada”, altering them in pikapika. But the price of cars remains the same as with cars — not everyone, and not everyone will dare to carry them in bulk sand, bricks,soil and other such goods. Yes, and they are not adapted for movement on country roads with small speed. In this position, unless the motor scooter cargo “the Ant” can help out, but it has a downside: air-cooling engine, small power, position steering wheel in the middle of the track, an open chain drive.
Manufacturing such machines for agriculture industry to establish cannot or does not want, considering it is a niche that apparently unpromising. But in my own experience I know that this truck would be useful not only to gardeners but also for rural residents in the backyard.
A prototype of the truck and even his “donor” was a mini-tractor, which I did even before the construction of a country house. Let me remind you, because the plot does not have electricity, this tractor was used by me not only (not so much) for cultivation or as tractor truck, how to drive various construction aggregates: rastvoromeshalke, woodworking machine, etc. To do this, the mini-tractor had a PTO shaft. Same shaft I felt it necessary to install on the truck. The new car inherited from mini-tractors (which by that time disappeared, because the power to it failed) wheel gears, wheel (sidecar FDD), the transmission (ZAZ-965) and “breaking” the frame with some alterations. It is this design provided the truck highly maneuverable — it can turn almost on the spot. 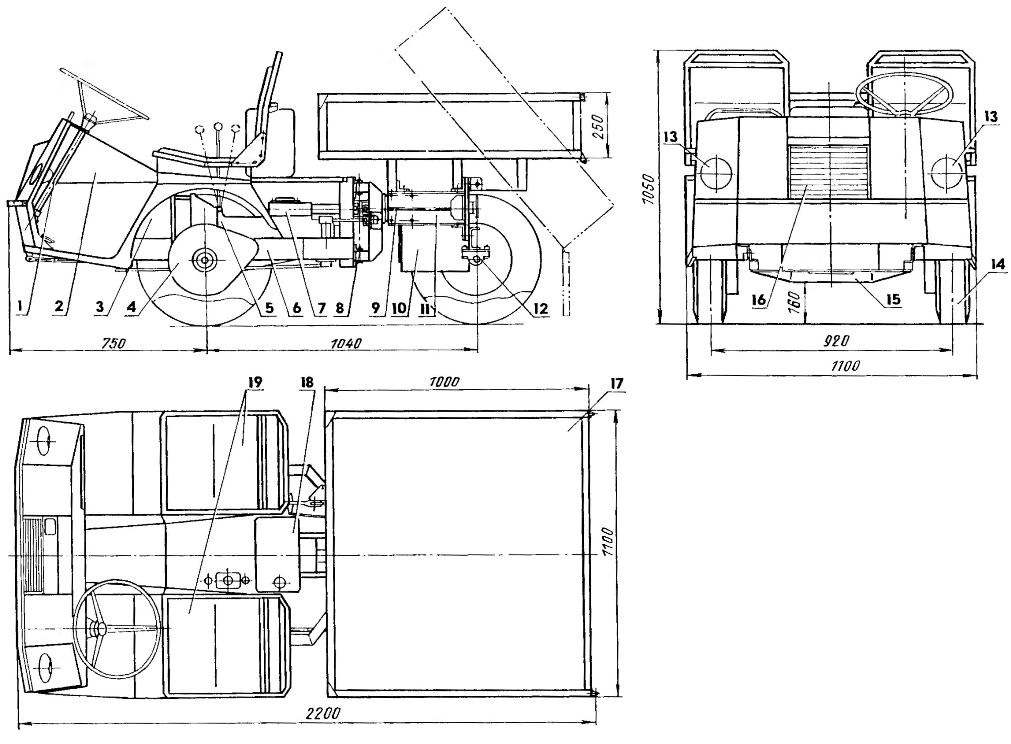 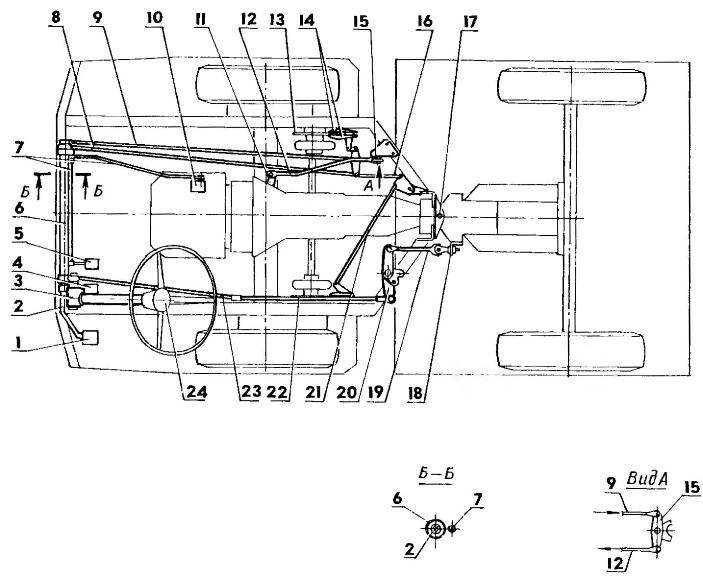 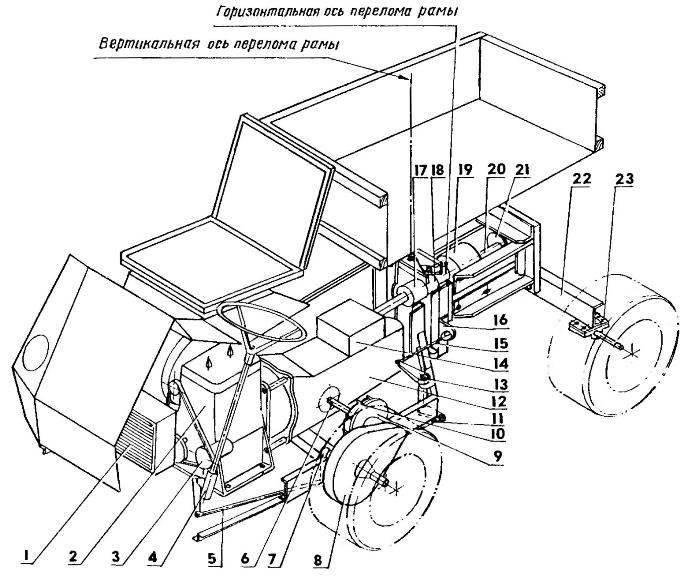 The greatest modernization was subjected to the front of the frame: it became longer, wider, and its cross member has now been made integral, and the rays diverged at an angle of 36° to the side members — not to interfere with enlarged (up to 20° in each direction) a “turning point” of the frame. Under engine instead of the brackets it mounted under engine area of 6-mm steel sheet, and between the axles mounted a curved I-beam of channel number 8, which greatly increased the rigidity of the structure. The spars extended offsets, each of which is made of a pair of segments steel corners No. 4, sklepu their shelves to length, thus obtaining a profile in the shape of the letter Z. Untouched in the front frame remained only its front with eyelets.
Rear of frame has remained virtually the same. Only replace the beam rear axle to a longer one to extend the track and put it in the transom plate for increasing the base pickup truck. The calculations showed that this beam can be made from one channel number 8 (on the mini-tractor it was made out of two such channels, without calculating). While there were still a significant margin of safety.
The machine size was limited to the condition that it fits together with the “Zhiguli” in one standard garage dimensions 6×3,2 m.
Although the size and design of the front half-frames are significantly changed, the layout is the same power unit and transmission — engine transmission and PTO, axles reduction gears remained similar to the one that was on a mini-tractor.
The staggers (expansion) spars mounted open cabin with comfortable seats: for the driver above the left wheel on the wing, and the wing of the right — seat passenger. Outside to the front of the cab in the middle of it placed the grille, and on the sides of the headlights. The rear frame set large wooden body, and underneath the box for the battery.
The engine of the truck with the loud name “Hercules” American-made 2-cylinder, 4-stroke, with cast-iron block and liquid cooling. Bought it
on the occasion of a neighbor’s cottage, which he knows how he got and lay for many years. The motor was not new to the same “unfrozen” with a broken top face of the cooling system. He drew its compactness. Ul UD-2 that was standing on a mini-tractor, was almost twice the size and power of 8 HP. 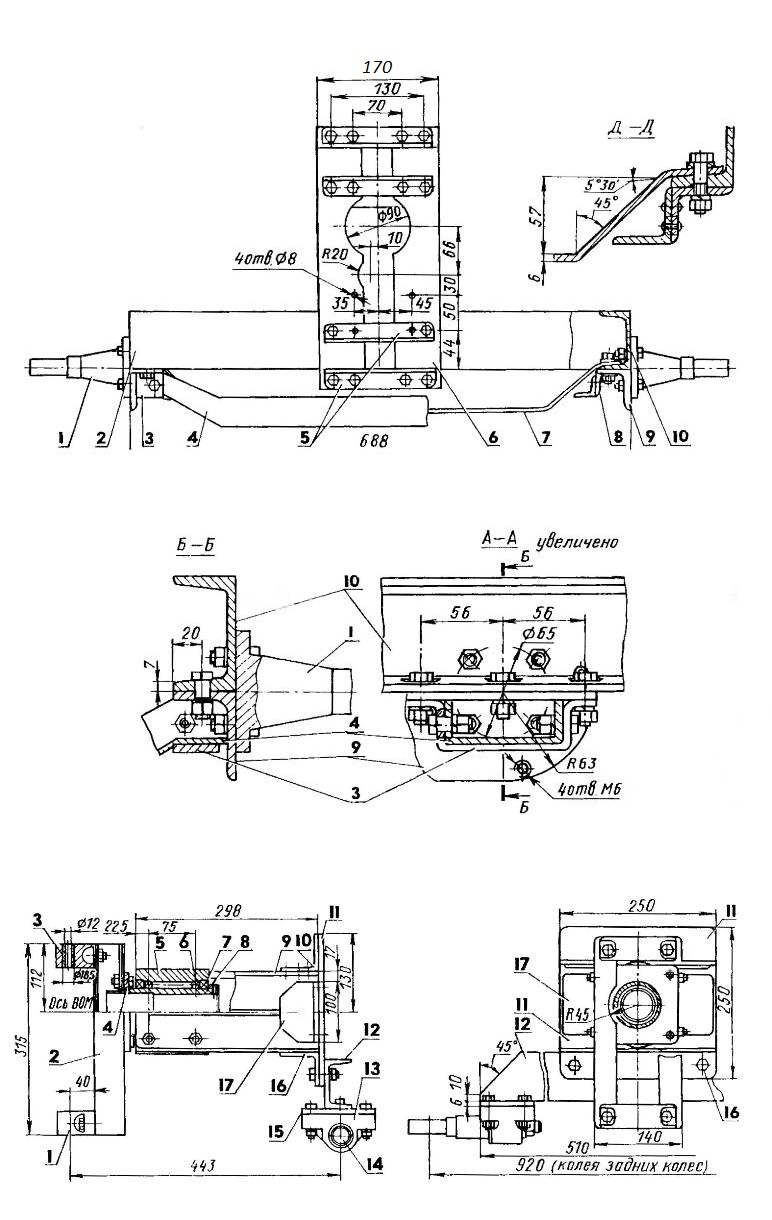 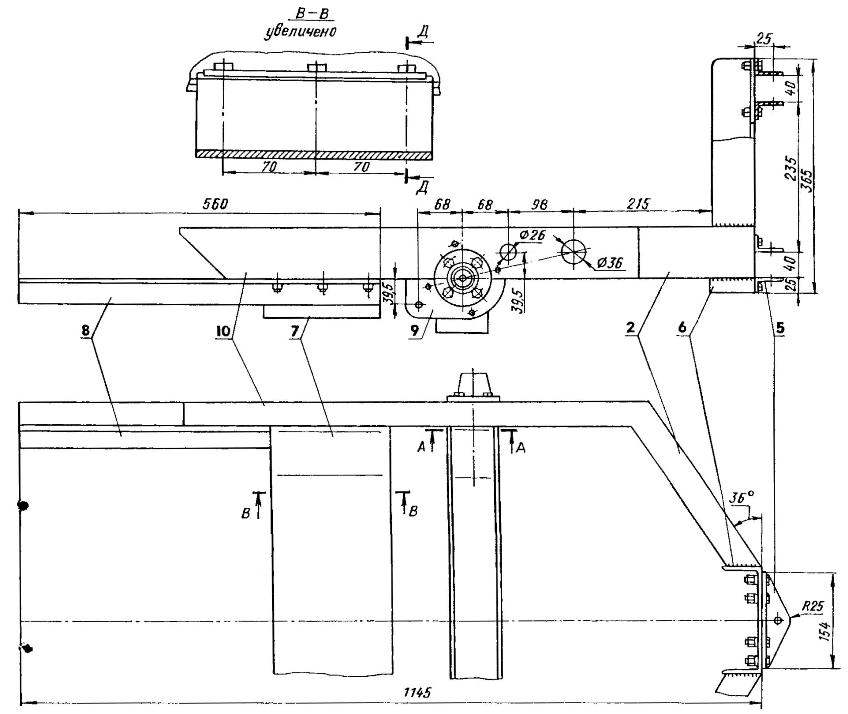 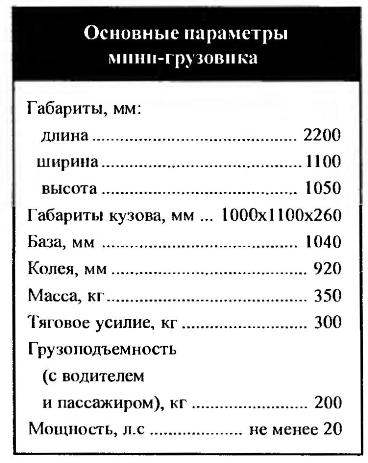 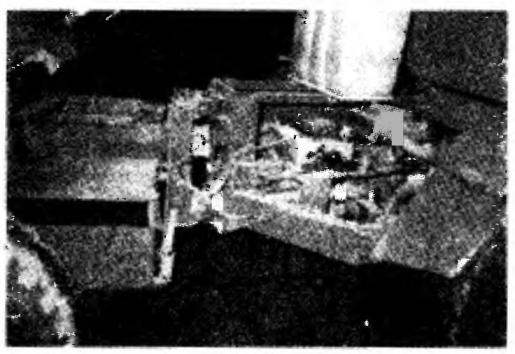 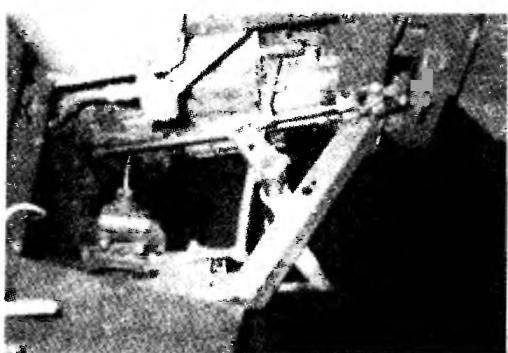 The mechanism of the “turning point” of the frame, a drive axle with plastycznej rubber coupling and brake disc 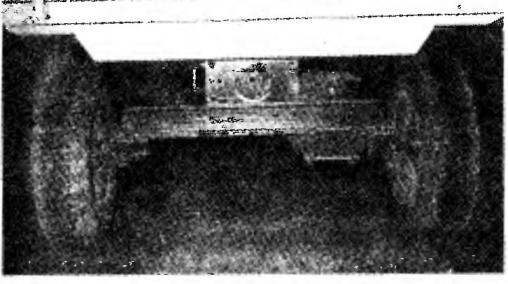 Rear axle and flange PTO
I “Hercules” provisional — surprisingly the parts had almost no wear and the rust hasn’t got to them. The crack on his shirt patched with sealant VGO-ZO-1. Good ger-metic, withstands temperatures up to 250 °C (although the coolant to a temperature not heated), and now time-tested the tightness of the shirt doesn’t break.
In the engine cooling system includes a fan casing, a centrifugal pump (pump) and the radiator — compact but with increased almost twice (in comparison with conventional same size) heat transfer. Fan and pump are driven from the engine crankshaft V-belt transmission. To control the temperature of the coolant at the engine block sensor and on the instrument panel — a pointer.
But the sensor and the fuel gauge didn’t even need.
The tank is translucent plastic canister, is on view between the seats of driver and passenger. Fuel (gasoline of the lowest quality) gravity fed to the carb via shutoff valve with filter. Next to the temperature sensor of the liquid on the dashboard — the ignition switch. The engine starts by the starter.
Ignition system — magneto. Headlight with main and dipped light and the starter feed from the battery. Light control — by toggle switch on the dashboard.
Collaboration starter from the car “Zaporozhets” flywheel “Hercules” at last had to mount the ring gear from the flywheel of Zaporozhye.
Chassis truck — tractor type with rigid suspension of wheels. All wheels same size, from motorized FDD. Leading and brake — front. Depreciation — due to the tires.
The drivetrain consists of the clutch with the gearbox from the car “Zaporozhets”, the axle shafts with elastic couplings (front driveshaft from the car “Lada”) and improvised wheel reducers. Reducers, in addition to a significant decrease in the number of revolutions (I = 6,35), change the rotation of the rod on the back, as the gearbox on the truck deployed to 180° relative to its position on the “zaporozhtse”. Same rubber couplings compensate for misalignment of axles wheel shafts gears. On the input shafts of the reducers are rigidly mounted (welded) brake discs.
To drive the PTO shaft (PTO) from the transmission I removed the top cover, and in its place established the mechanism on the PTO. The shaft is a cardan transmission of several “tribes” with hinges. His first “knee” is docked to the shaft of the firing mechanism through the keyway. In place of “fracture” frame PTO has a dual hinge (from pair crosses). In the rear frame it is held in two bearing units and between them is another “helicopter” hinge. At the end of the last “knee” for the transom plate includes a flange to which may be attached a return flange of the drive shaft of any machine or mechanism. The rotation speed of the PTO is governed by the speed of the engine.
Managing truck classic: to the left of the steering column — clutch pedal right — brake pedal and throttle.
Steering column and steering gear with a bipod from a car “Moskvich”. The force for the rotation of the rear the frame is transmitted by a linkage, rockers and levers. The latest thrust in the place of “fracture” of the frame has a crossbar.
Since the pedals control van located on the port side, and controls the throttle valve of the carburetor, the clutch and the right brake pad is on the right, then to transmit forces from the pedals from one side to another used shafts with the levers. Further efforts to the actuators are transmitted again with the help of rods, levers and swings. For compactness the core shaft of the clutch laid in the tubular brake shaft in plain bearings —. nylon bushings are inserted into the ends of the tube.
The rear frame is placed a wooden body. Frame it — from bruskov by section 35×35 mm sheathing plywood. For samosvalnaya cargo body is mounted on polarg me hinged on the axis of the two eyes, and the back Board is folded.
The body is raised due to the displacement of the center of gravity back. To exclude spontaneous recovery in the transport position, the body is additionally attached to the rear frame with two screws M10.
The maximum speed of the truck — a little more than 40 km/h. I Think that for this vehicle are quite enough. The power of the engine enough for starting a loaded machine even with the 3rd transmission, and empty and 4th. To the management of truck we need to adjust the rotation using the “fracture” of the frame after the control car is quite unusual.
Although after the arrangement of a suburban area, the need in the truck, in General, disappeared, while holding it together with “the Zhiguli” under one roof. Disassemble the parts can not be solved — successful machine.
E. Evsikov, Lyubertsy, Moscow region.