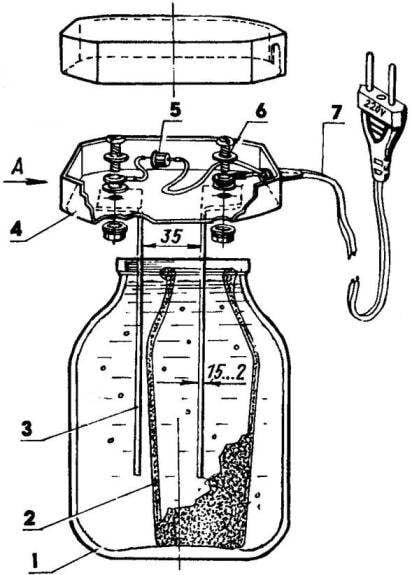 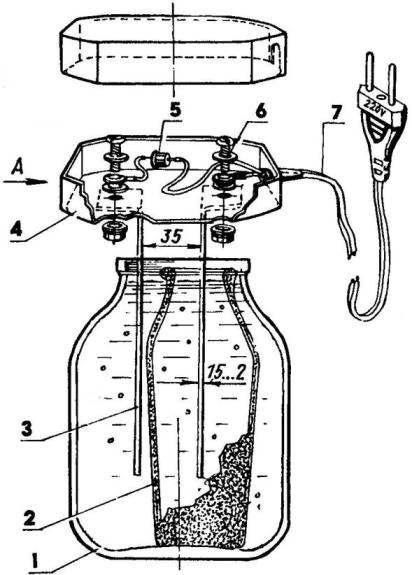 An activated by an electric current of water appear special properties: such moisture has a significant influence on the course of redox processes in animate and inanimate nature. Using the activated water, the enthusiasts achieve success in a wide range of areas from production to consumer (publications on obtaining “live” and “dead” water, see the journal “modelist-Konstruktor” № 12’83, 3’87, 3’96, 12’2000). Today’s collection is about the activators that can be done in a home workshop, based on the materials of the popular Bulgarian weekly “Guide yourself.”

“Ignorance of the chemical formula of schnitzel does not affect its taste,” the pragmatists assert. Similar to their approach to the assessment of the prolonged research activated or, as they say, “dead” and “living” water. Not waiting for the verdict of the official science, many practitioners and fans of “non-traditional means” use the first of these miracle liquids (with its inherent acidic properties) for disinfection and wound treatment, seed treatment, increase the shelf life of perishable products. Experimenting with it in other areas from attempting the solution of purely domestic problems to produce highly durable concrete. “Live” water is often used not only as an active stimulant (in particular, for rapid healing of purulent incised wounds and people tighten the skin cracks and nipples from farm animals, activation of seeds before sowing), but also to prevent the number of colds, and also as allegedly promising cosmetics…

The scheme, on which enthusiasts, pragmatists receive water from such medicinal and economically promising properties, in fact, reduces to the well-known and recognized all of the electrolysis, when the current passing through the usual N2O at the positive electrode, called the anode, produced an excess of hydrogen ions and environment is taking on acidic properties (obtained ANO-leagues), and near the negative (cathode) — there is increased concentration of ions of hydroxyl group, the leaching of this part of the solution (catholyte). 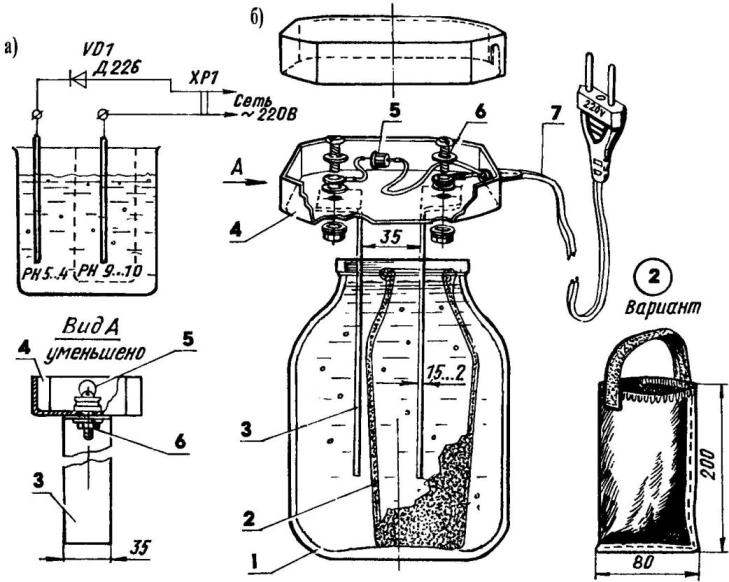 Principle (a) and device (b) for “live” and “dead” water in small quantity:

To and after switching off the current, the liquid again became equally neutral, the activator pre-divide the semi-permeable to ions partition. But most go for technological trick, placing one of the electrodes, for example, the anode, the special capacity of unglazed porous ceramics, unpainted wood, coconut, “boiled” (to remove the technological glue)cardboard, canvas, leather and the like “monopoly-permeable” material.

Thus, the catholyte and the anolyte obtained even in the simplest of devices, do not mix and are easily removed for subsequent practical use. The extent of their activity can be judged by the so-called hydrogen indicator pH measurement which are “Ionomer” and other, rare in the home appliances. Have a good catholyte pH value shall be not less than 9 units, while the anolyte is not more than 5.5. Ordinary water has a pH = 7.

Attention! To monitor pH it is only when you turn off the activator!

Of the “fortress” of anolyte and catholyte can be judged by the “school-chemical” indicator — litmus paper, which, as you know, is red in acid and blue in alkaline environment. However, most probably available are phenolphthalein, which is under the same name or as a laxative “Blizzard”, “Purger” is sold in all pharmacies. Dissolving tablet such funds in a tablespoon of H2O, get a great indicator, one drop of which instantly turns pink catholyte sample (a tablespoon of “live” water). But is this painted drop catholyte in the anolyte sample, as right in the eyes will occur discoloration, giving evidence thereby of a rather high activity “dead” water.

The performance of a simple “tourist” version of the activator is small: up to 1.5 l of catholyte and anolyte in a 3-liter jar for 5-15 min, depending on the quantity and initial water salinity, the strength of the noise current, the size (or rather, activating the surface) of the electrodes. Hence, ways to improve the design.

An acceptable home version of the source “live” and “dead” water may, in particular, serve as multi-purpose activator, manufactured on the basis… of the saucepan (cooking pot) with a high-performance Central electrode formed from metallic glasses or improvised shells, which significantly increases its active surface. The source of supply is domestic single-phase network with a well-grounded neutral conductor. Connecting to them is done using plug Auroville completely eliminates the accidental “phase” on the case-the second electrode. And to best protect the user, the design is additionally introduced protective perforated glass, insulating enclosure for the rectifier compartment and the light, promptly signaling the inclusion of the activator in the network.

The dimensions of the electrodes and the distance between them is not critical and virtually no effect on the quality of the resulting “living” and “dead” water. But they have a significant influence, as noted earlier, the performance of the entire device as a whole, that is, the current density and speed of activation. Power diode (5 to 10 A, 300 V) electrically and mechanically connected with movable Central electrode with an l-shaped aluminum bracket (dimensions not critical) that besides the function of radiator heat sink. 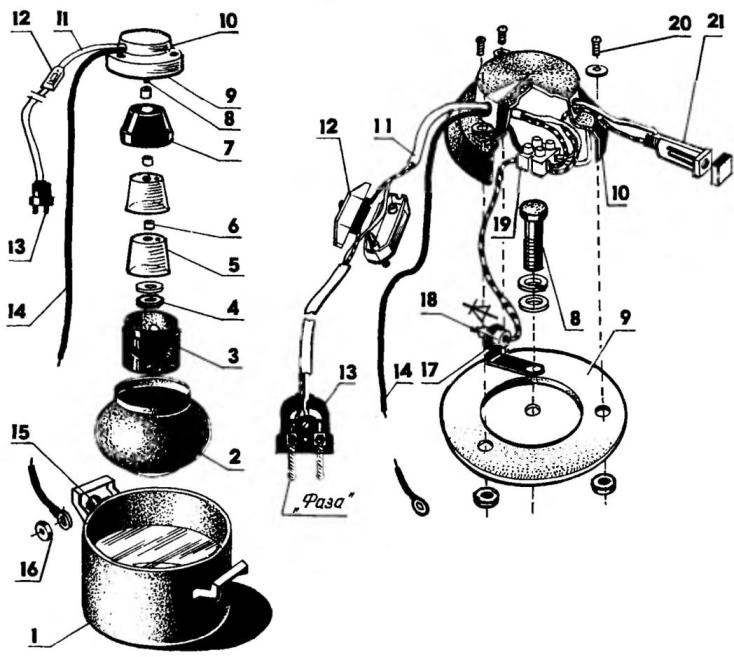 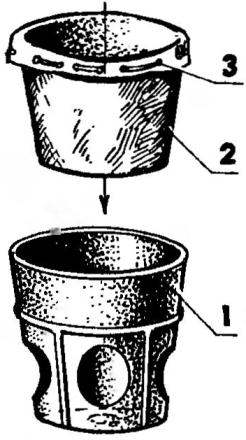 1 — a perforated body-“holder” (Carbolite, glass fiber); 2 — canvas liner in the form of a capacious Cup; 3 — cord-coupler

An insulating housing for the rectifier compartment is the best fit carbolova stacking box, which together with the terminal block, passing switch, safety cord and power plug are easily available in any electrical store. Well, a blank for a protective Cup may be, for example, a round plastic box of reasonable size. For the smooth passage of water in it it is necessary to drill 4-6 holes with a diameter of 35-40 mm.

In the author’s version of the activator of the Central electrode is the anode. “Dead” water, formed around him in the course of activation, separated from the “life-giving” catholyte and the bottom wall of the vessel from neglazurovannoy ceramics. Unfortunately, the latter become clogged over time salt deposits and the required ion polupronicaema such a membrane is broken. Then the vessel has to change to a new one, and continue to use for other purposes.

At intensive operation of the activator, it makes sense to use a more practical canvas membrane, polupronicaema which, in contrast to the lag of ceramics, is easily restored by boiling in boiling water. And voluminous “vessel-Cup” of a material is better to “keep in shape”, it is advisable to use it in conjunction with carbolitium “holder”, in the bottom and the walls of which are providently drilled holes with a diameter of 60-70 mm.

From the editor: the use of aluminum as a material for the electrodes when activated, water is now causing doubts among some experts. Therefore, it is desirable to replace stainless steel, recommended for food industry. Dishes and pots of this material are branded with the inscription “Stainless steel”.