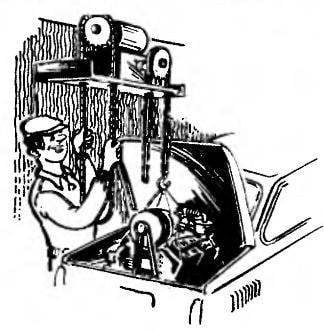 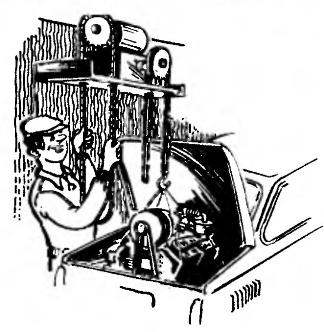 Serious repair of the engine of a car is now expensive. So many motorists, having the necessary knowledge and experience, ready to take on it yourself. But do not presume that since this repair the engine from the vehicle is required to remove and after repair reinstall. Manually, without the right lifting equipment, it is impossible to do. However, you can find a way out of any situation. And those motorists who own a garage, I would advise you to take advantage of my experience. To relieve the engine of “Zaporozhets” I use in my garage self-locking worm gear.
Heard that the experts do not recommend to use such a mechanism as the lifting, saying that his worm pair quickly becomes loose and ceases to hold the load. Do not argue, especially in the case when loads pick up, say, daily. But the engine is the same car not every day you get to shoot! So at my age “plows” the strength of this pair, I think, is quite enough.
How is the lift?
In the side wall of the garage, I was imbedded ends of the two steel area 75x75x8 mm so that under them was located in the hood “Zaporozhets”. On shelf angles mounted steel plate 10 mm thick with worm reducer (from decommissioned machine tools) attached to it with eight M8 bolts. Slab with corners not connected, which to some extent allows you to adjust its position over the motor vehicle.
The gearbox has a gear ratio = 60 and capable of moving loads up to 300 kg On the drive (worm) shaft is worn and connected with it by shear sprocket (d = 37,1 = 12,7) from a moped “Karpaty” with a chain passed through the hole in the plate with a diameter of 20 mm and connected in a ring.
On the loading (output) shaft of the gearbox wearing and are also connected with it by a key sprocket smaller (g = 14, t = 15,875), which is freely thrown chain terminated by a hook. For this circuit in the plate drilled hole diameter 28 mm. 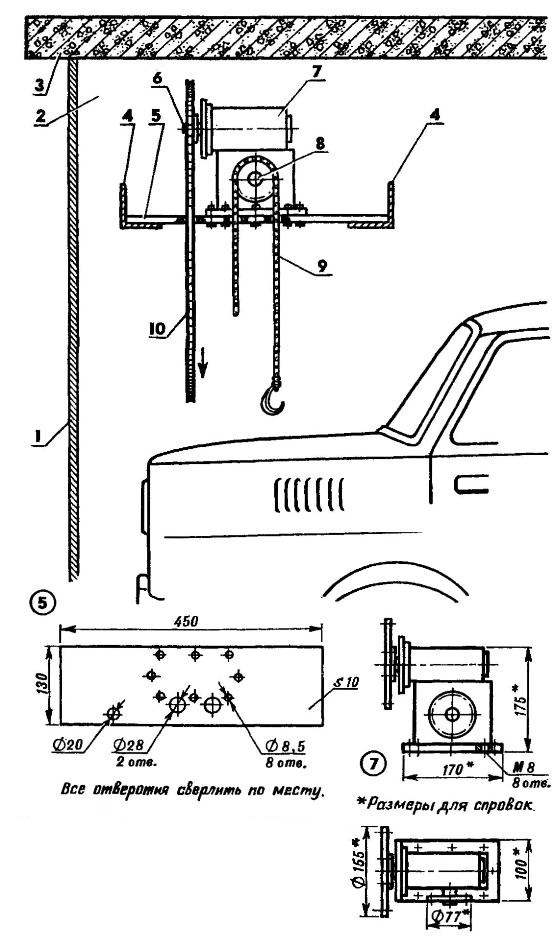 The location of the lift in the garage:
1 — garage doors 2 — side wall; 3 — top; 4 — beam lift (area 75x75x8, L3200); 5 — supporting plate (steel 20, s10); 6 — drive shaft with sprocket z = 37; 7 — worm gear reducer (I = 60); 8 — shaft with star cargo g — 14; 9 — chain cargo (t = 15,875); 10 — a chain drive (t = 12,7), looped.
I use the lift in the following way. Disconnecting the engine from the frame of the car, bringing it under the loops of 5-mm steel cable and put the ends on the hook. Then, hand over hand looped circuit, start rotating the drive shaft of the gearbox. The rotation is transmitted to the cargo shaft, and the cables are stretched. Gradually and carefully raise the engine. When he enters the confines of the engine compartment, stop the hoist (gearbox in this case securely holds the load) and shift the “Zaporozhets” to the depth of the garage to the meter so as to make room for the table, which then lowered the engine. Table on wheels, and it’s easy to move in the easy direction.
Had to remove the motor and bigger cars “Zaporozhets”. To shift it in close garage was nowhere, so two of my assistants were pulled on the ropes raised the engine to the table, standing close to the bumper of the car, and I chain rotates the gear in the opposite direction.
After this incident, I began to think over how to provide the plate with rollers that would roll back the lift to the side wall of the garage and removed the engine lower to the table.
Of course, you can go ahead and electrify the lifts, using the electric motor with this gearbox. But it will be a different design.
GAVRILOV, Gomel