Camber angles and toe of the car very accurately can be adjusted, without resorting to service stations. We just need to have some plumbing skills and to have the simplest tool to their own to make for this adjustment tool kit, which is easy and convenient performance. Consider, for example, the variant with the car VAZ-21063. The distance between the centres of the footprint of the tire on the ground — 1365 mm. If through these points to carry forward in the course of movement of the vehicle two parallel lines, then they could become benchmarks for subsequent adjustments. However, it is impossible to carry: the protruding part of the side surfaces of the car will be a hindrance. Hence the need for these parallel lines to hold at some distance from the vehicle. To make that possible with the devices, which can be called a protractor.

The basis of the protractor is raked from hardwood or metal. The parties should be strictly parallel. Rod length from 450 to 500 mm.
Photo 1 shows a wooden rail length 500 mm, thickness 30 mm and width 70 mm. photo 2 shows the angle of the square tube size 25X25 mm, length 450 mm. At an equal distance from the ends of the slats are drilled two holes pin Ø 6 mm. Distance between their centers corresponds to the diameter of the drive wheel 360 mm. inserted Into the holes of the studs stops. The latter is made of sheet metal with a thickness of 4 mm; length 120 mm and height 50 mm Rests closely round the edge of the disc touching the surface of the tire. Edge stops at the point of contact with the tire is cut at an angle of 45 degrees.
The base of the protractor special pins with hooks on the ends attached to the drive; and tire pressure should be normal. Using their elasticity, it is possible to achieve parallelism of the base of the protractor relative to the plane of the disk. To check the parallelism used a ruler or a caliper.
At one end of the slats attached to the coil with a scaffold thickness of 0.2…0.3 mm and length of about two meters with a plumb on the end weight of 20…30 g At the other end slats secured by a single screw movable millimeter line length of 80…100 mm. it is Desirable that it can pivot around an axis — so convenient to make measurements.
On the rail, the top strictly by its center, there is an arc of sheet metal with thickness 2…4 mm, a width of 25 mm (photo 2) or 70 mm wide (see photo 1), which is fixed to rail clamps or screws. 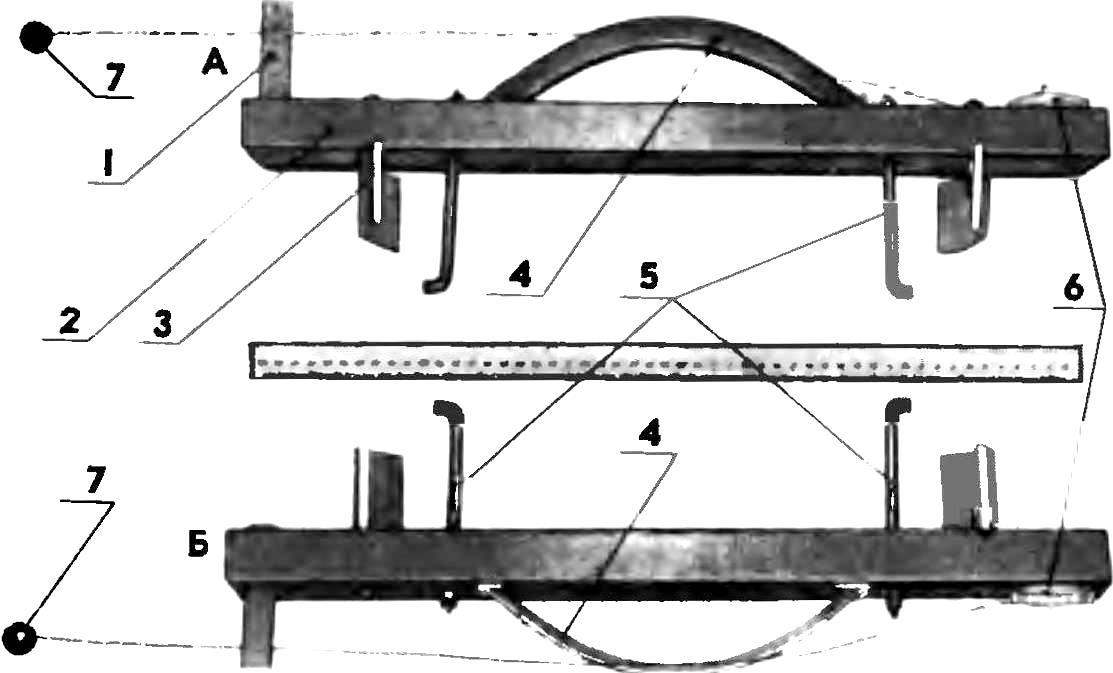 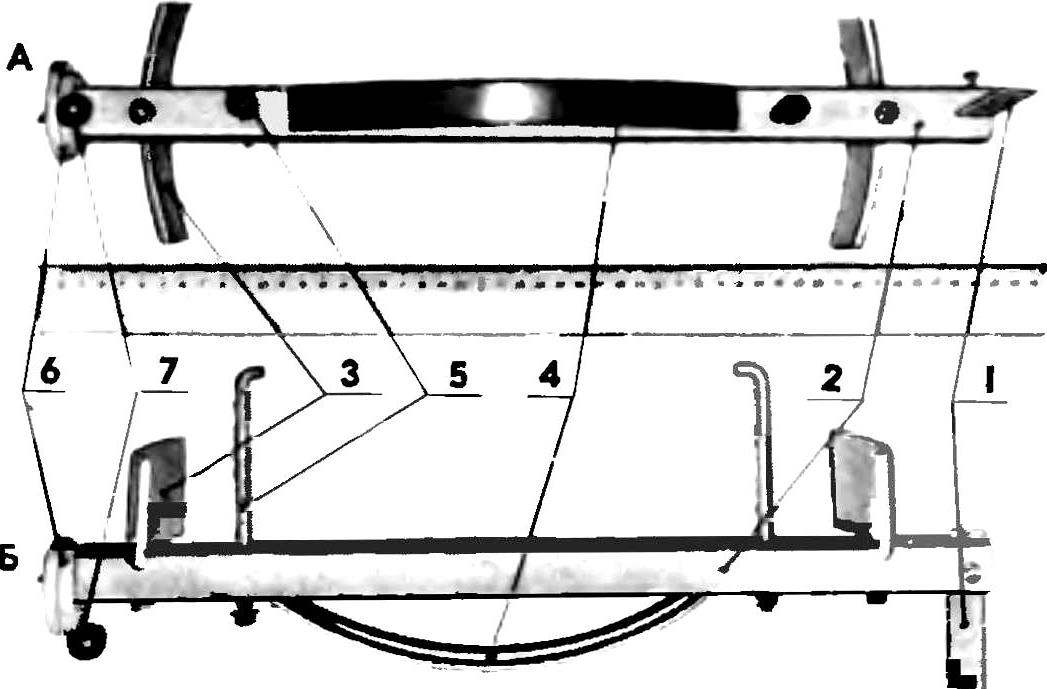 The all-metal version of the device (the A — side external device, B — side):
1 — mm ruler, 2 — fixture base (steel square tube 25X25 mm), 3 — stop, 4 — arm, 5 — stud with claws, 6 reel and line, 7 — speed plummet.
The reference point of the movable scale (number, label) needs to be precisely adjusted according to the height of the arc. Fishing line, a plumb line stretched on the surface of the arc and mark on the scale, parallel to the plane of the rails and rail stops, in turn, — the plane of the wheel.
We offer to your attention a set of goniometers has the same parts and dimensions, the same method of adjustment.
During adjustment of the wheels of the machine must be placed on a horizontal surface. You need to provide access to the front underside of the car.
With the Jack wheel to alternately raise and set the inclinometer perpendicular to the ground (scale down). Fishing line or thread almost touch the surface of the scale. After that, the wheels fall under part load. Referring to the adjustment (in the user manual), set the size of the collapse.
During angle adjustment of the wheel alignment protractors are fixed in a horizontal position (or it is achieved by turning the raised wheel). The scale occupies a position on a course of movement of the vehicle. On distance 1,5…2 m from the front of the car at the level of the inclinometer installed rail, plank or Board length of 1.5—1.6 meters. Of the coils are drawn the fishing line with a plummet, which, skirting the rail, form an approximate line. Orient a line on a scale of left or right angle. A second line installed strictly parallel to the first. You can now proceed to adjustment in accordance with the instructions.
A protractor can be used to adjust the wheels and other cars. We only need to consider the diameter of the wheel disc and method of attachment thereto of the protractor.
I. DRIK, Lieutenant Colonel, Zhlobin, Gomel region.