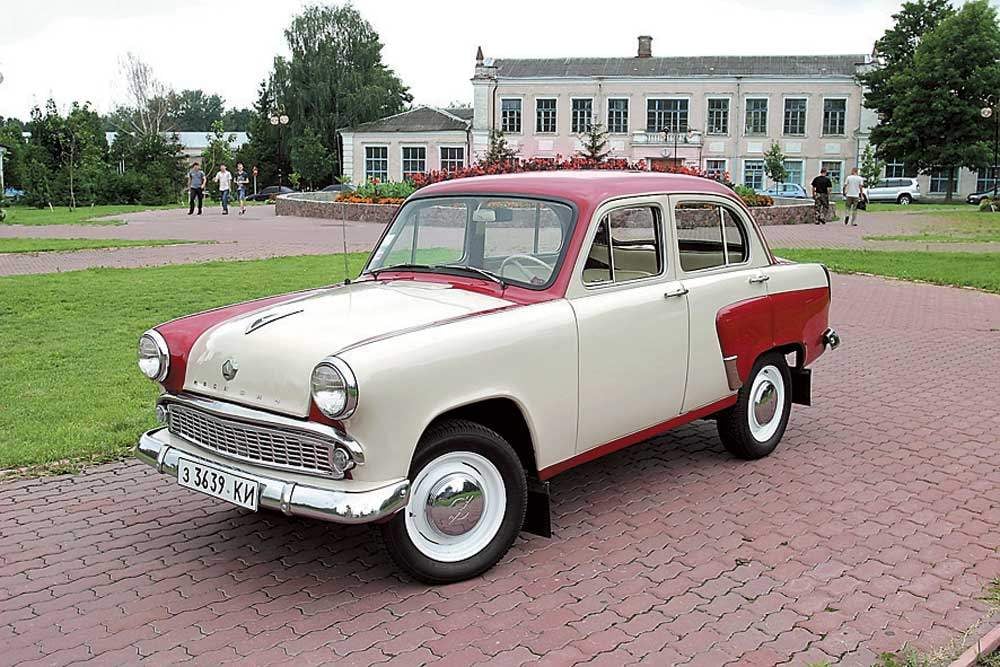 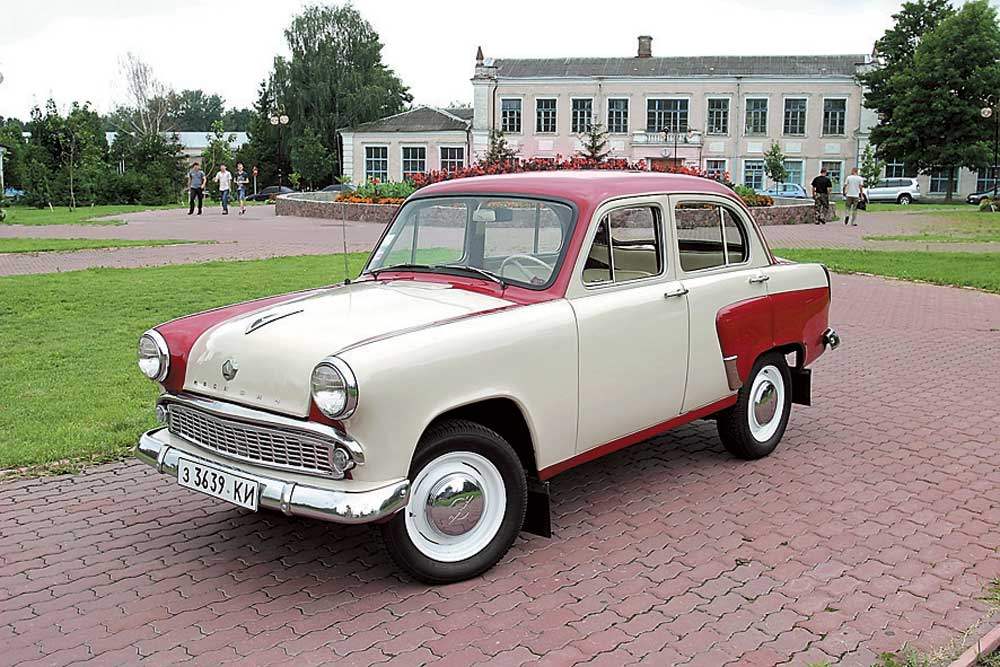 Soviet midget car MOSKVICH-403. The first postwar car of the Moscow plant of small cars (MZMA) MOSKVICH-400 already at the launch of serial production was a day yesterday the German automobile industry, because it is only slightly upgraded OPEL KADETT K-38 model 1935. Undoubtedly, the year of its launch, the German car was a very sturdy vehicle with a monocoque body and independent suspension of front wheels of the type du-bonnet and brakes on all wheels hydraulically operated. However, in 1946 the car was too old.

The position is not saved or modernization of 1954, when the car called MOSKVICH-401, but the factory designers to improve the external appearance by attachment of new outer body panels, which resulted in a small batch of experienced car MOSKVICH-4243.
In 1956 the pipeline was set a fundamentally new model, called the MOSKVICH-402, with modern, beautiful for that time body. Designers AZLK managed to create a car that fit the style of cars in the global automotive industry — it is enough to compare the new MOSKVICH-402 with produced in those same years, the British car-a classmate of FORD PREFECT
The car develops a speed up to 105 km/h, was equipped with a 1.22-liter engine capacity of 35 HP with a valve mechanism of the type SV and three-step transmission.
MOSKVICH-402 had a modern for its time components and assemblies, which were telescopic dampers, baskonia front suspension, lockable from inside the boot lid, gearbox with extension and dvuhsvetnoe steering wheel. For the first time in domestic practice the car was equipped with a curved (panoramic) windshield. In the first years of the release of the 402-th equipped with an engine, transmission and rear axle from the 401-th model, however, the “ideology” of the body of the new car allowed in the future to upgrade it, what MZMA and have done for a number of years. 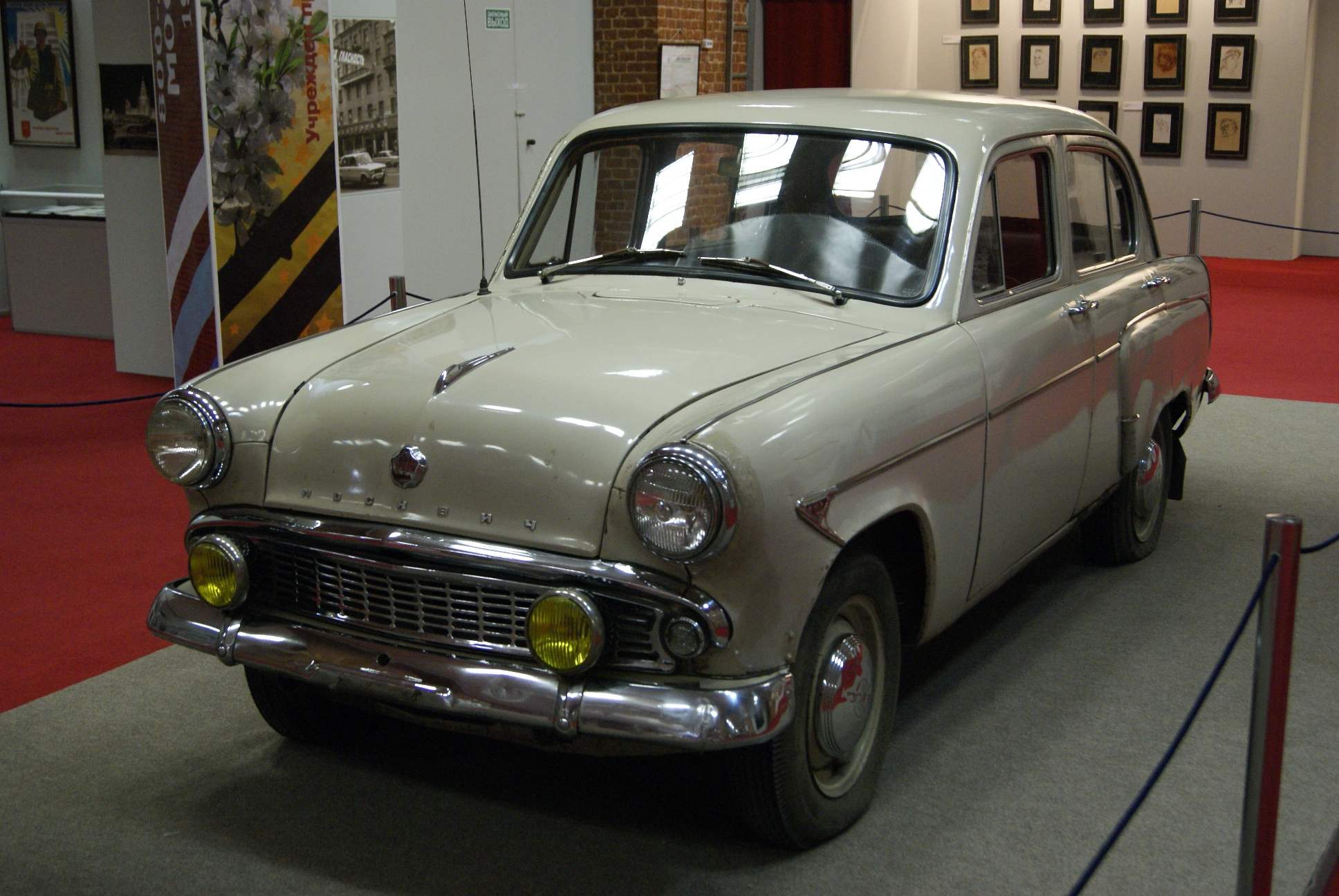 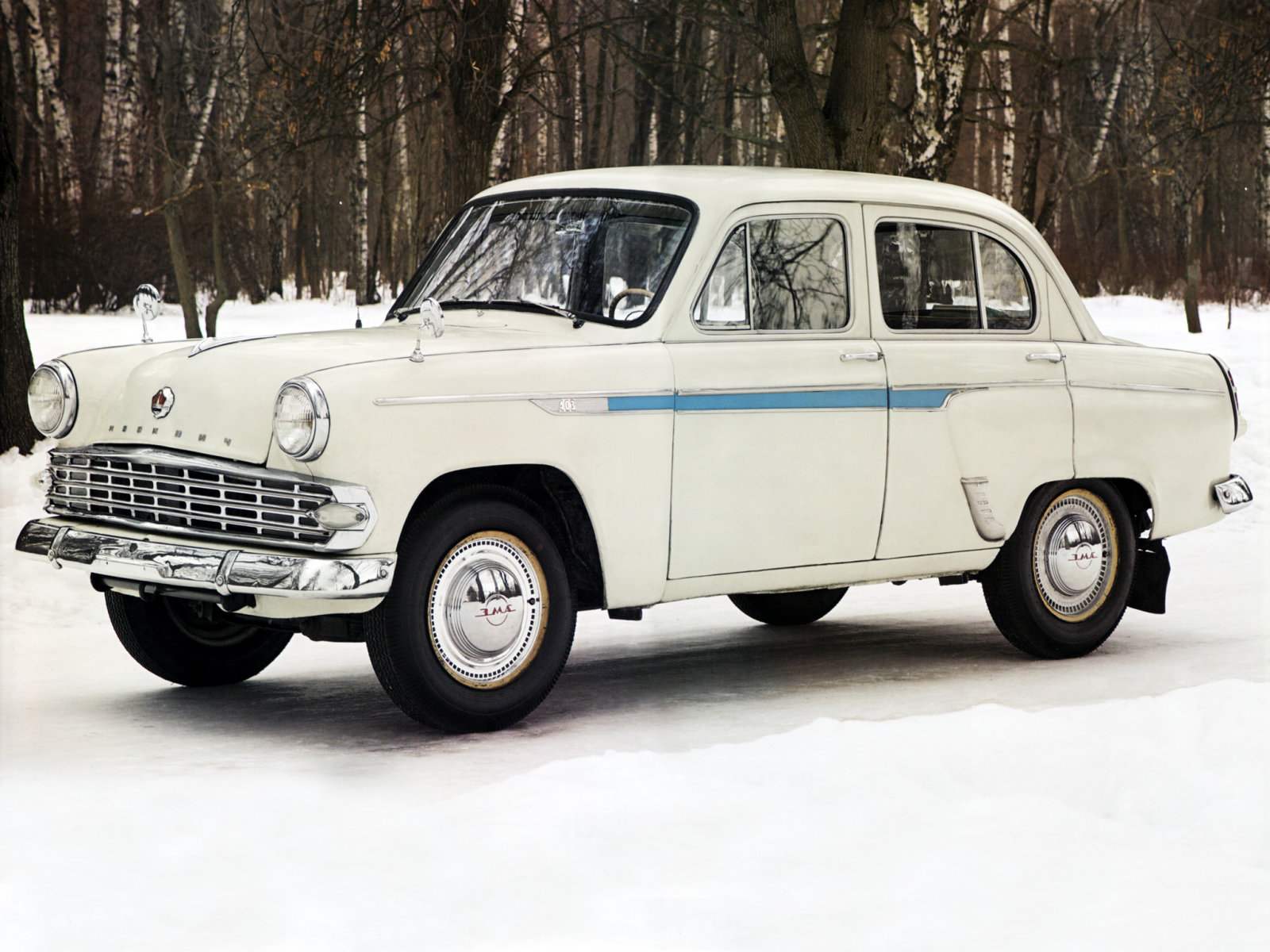 The export version of MOSKVICH-403 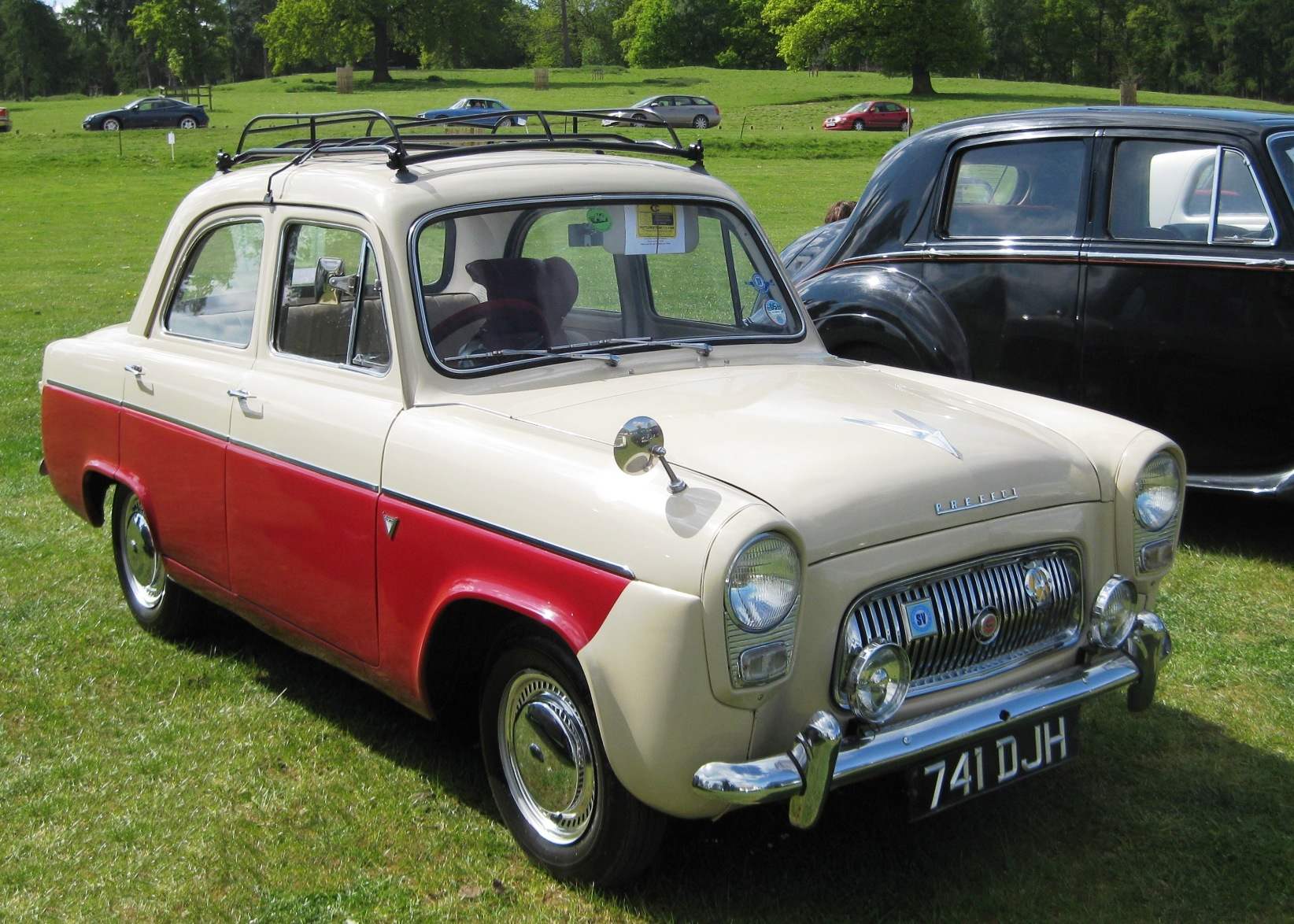 This is not a MUSCOVITE, and FORD PREFECT car of the English branch of Ford 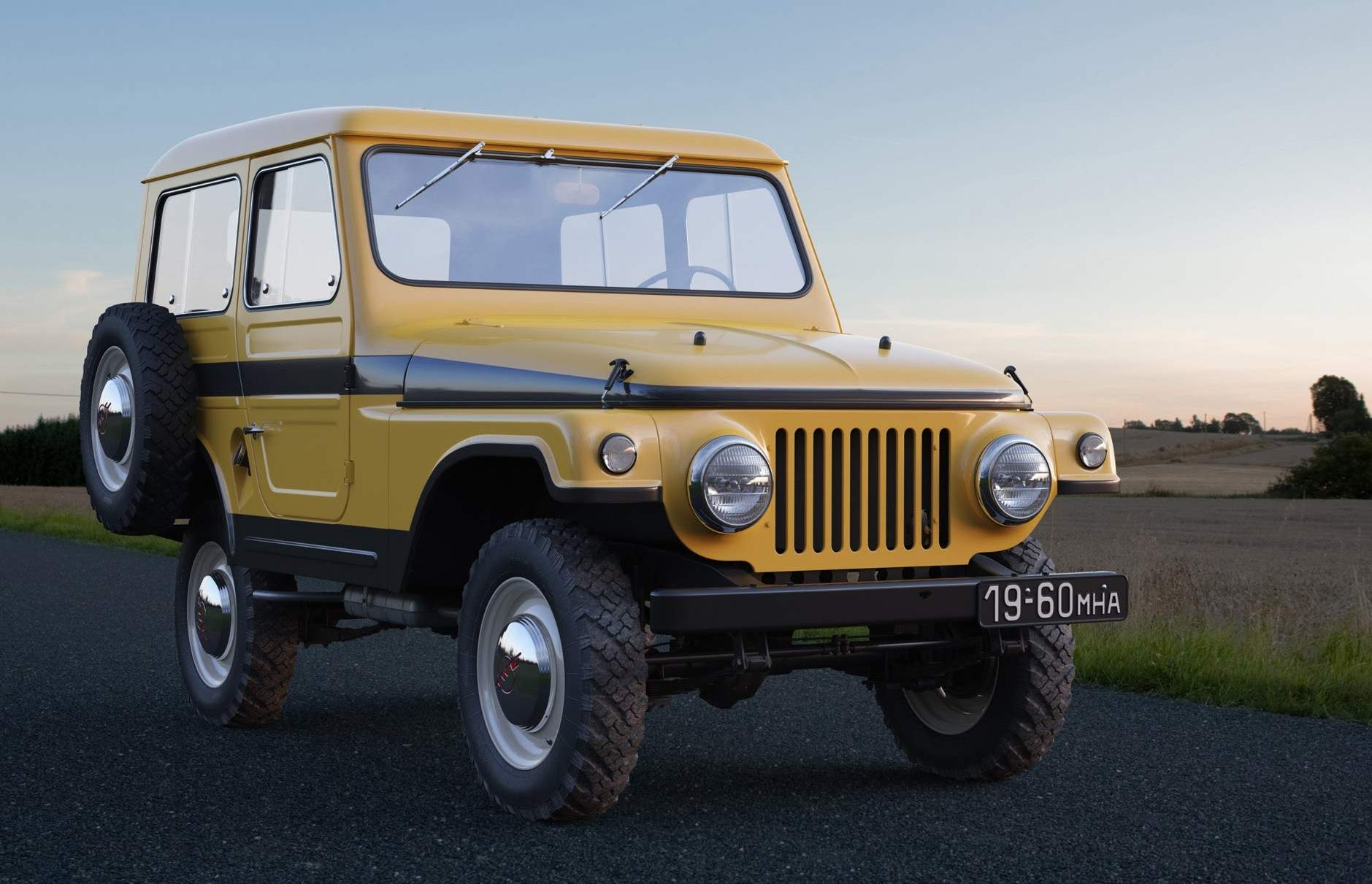 MOSKVICH-416 release in 1960 — an experienced four-wheel drive car based on the models 407 and 403
Almost simultaneously with the sedan on MZMA was launched the serial production of the MOSKVICH-432 with a body type van and a car with a station wagon, which received the designation MOSKVICH-424. Universal became the first Soviet serial car with a convertible cargo body — the back seat of the car was, forming the cargo compartment length of 1.473 m, and a width of 1.22 m, allowing to carry up to 250 kg of cargo. “Stepney” was situated in a special well under the floor of the cargo compartment. The wagon’s rear suspension had heavy duty leaf springs, the width of which was more than 402, to 5 mm.
Special attention deserves the all-wheel drive modification of the 402-th, called the MOSKVICH-410. The car with ground clearance of 220 mm (as in modern FIELDS!) had two of the leading axle and axle suspension all wheels on longitudinal leaf springs. Transmission jeep had a two-stage transfer case and constant velocity joints, ball-type. In 1958, four-wheel drive MOSKVICH received a new 45-HP engine models 407 and a four-speed gearbox. Part cars terrain was manufactured with a body type wagon. All in all, until 1960 MZMA was released about 12 thousand AWD cars.
The gradual modernization of the 402-th led to the emergence of the new, more powerful 45-horsepower overhead valve engine displacement 1,358 liters, developed by designers MZMA I. Okuneva, by I. Ya. Gladilina and Hot on the basis of the same Pleskovo motor. The refusal of the lower valves, increasing the compression ratio and the working volume was allowed to increase engine power by 25 percent. In conjunction with the new four-speed gearbox and hypoid main gear, the car was supplied to the external market at that time was exported to 30 percent of the total production of the plant. Since 1958, the modernized MUSCOVITES got another digital index — 407. 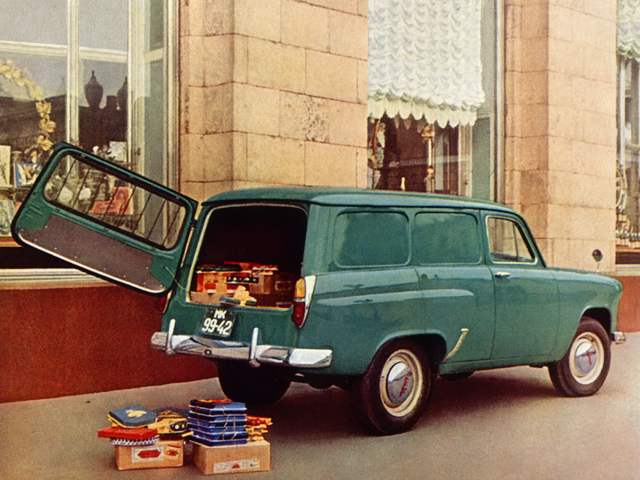 MOSKVICH-432 with a body type van 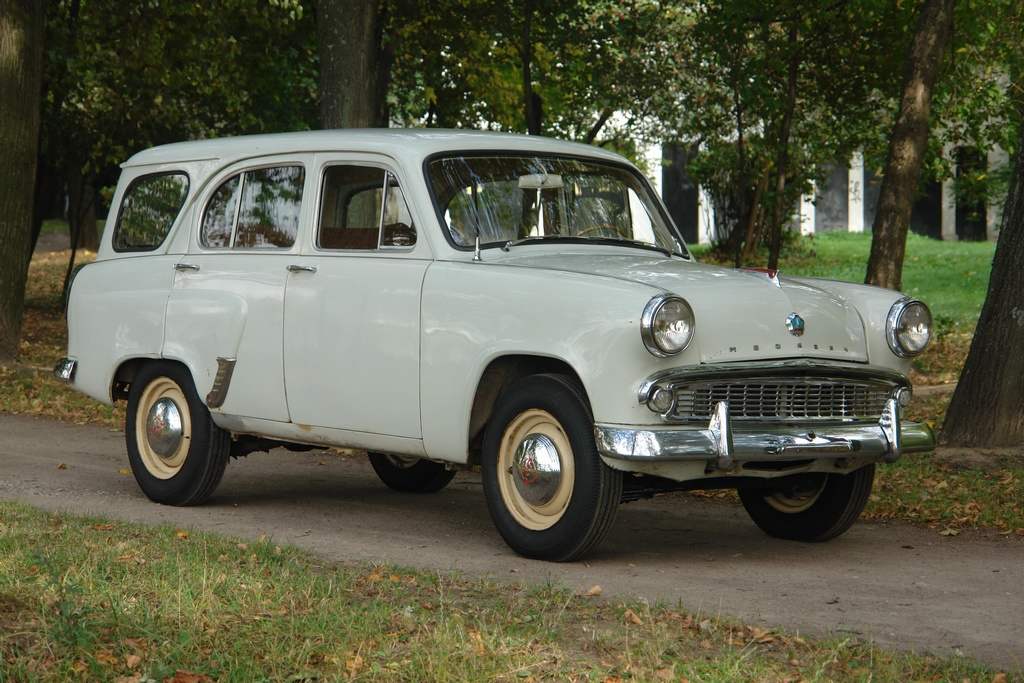 MOSKVICH-424 with a body type wagon
Last modification of 402 was MOSKVICH-403, which received a new front suspension and upgraded engine. The car became a kind of quintessential concept model of the sample of 1956, as was fitted units and assemblies, which later became the basis of a fundamentally new machine with index 408. MOSKVICH-403 enjoyed great popularity among customers due to high durability, good maintainability, simplicity and, importantly, the huge excess of demand over supply and lack of models MZMA any serious competition from other plants.
Almost the first time in the domestic automotive industry MUSCOVITES models 402, 407 and 403 was a very modern three-box sedans with severe motor, baggage and passenger departments. Should probably remind you that all previous Soviet cars were two-volume. Thus, the MOSKVICH-400 and MOSKVICH-401 was not even a trunk lid — access to it was carried out at the salon, why it was necessary to drop off passengers and fold the rear seat backrest.
BODY. The car MOSKVICH-403 had a four-door body type carrier type — it consists of a rigid spatial farm, which is directly attached to the engine and the landing gears. Farm welded into a single unit of several major components-subassemblies. To increase the overall stiffness and strength of the engine compartment and the floor of the truck was amplified by a pair of fixed side members of box section connected at the front of the crossmember. All permanent joints of the body has been welded, made contact welding; in some places the connection was intensified by arc or gas welding. The main parts of the lining of the case stamped from sheet steel with thickness 0,8 — 1,1 mm.
The body was equipped with a rear view mirror mounted in the upper part of the windshield and the glove box, made of water-resistant paperboard; a heater for heating the body and the windshield; a windshield washer, which worked from a foot pump located on the floor left of the clutch pedal. 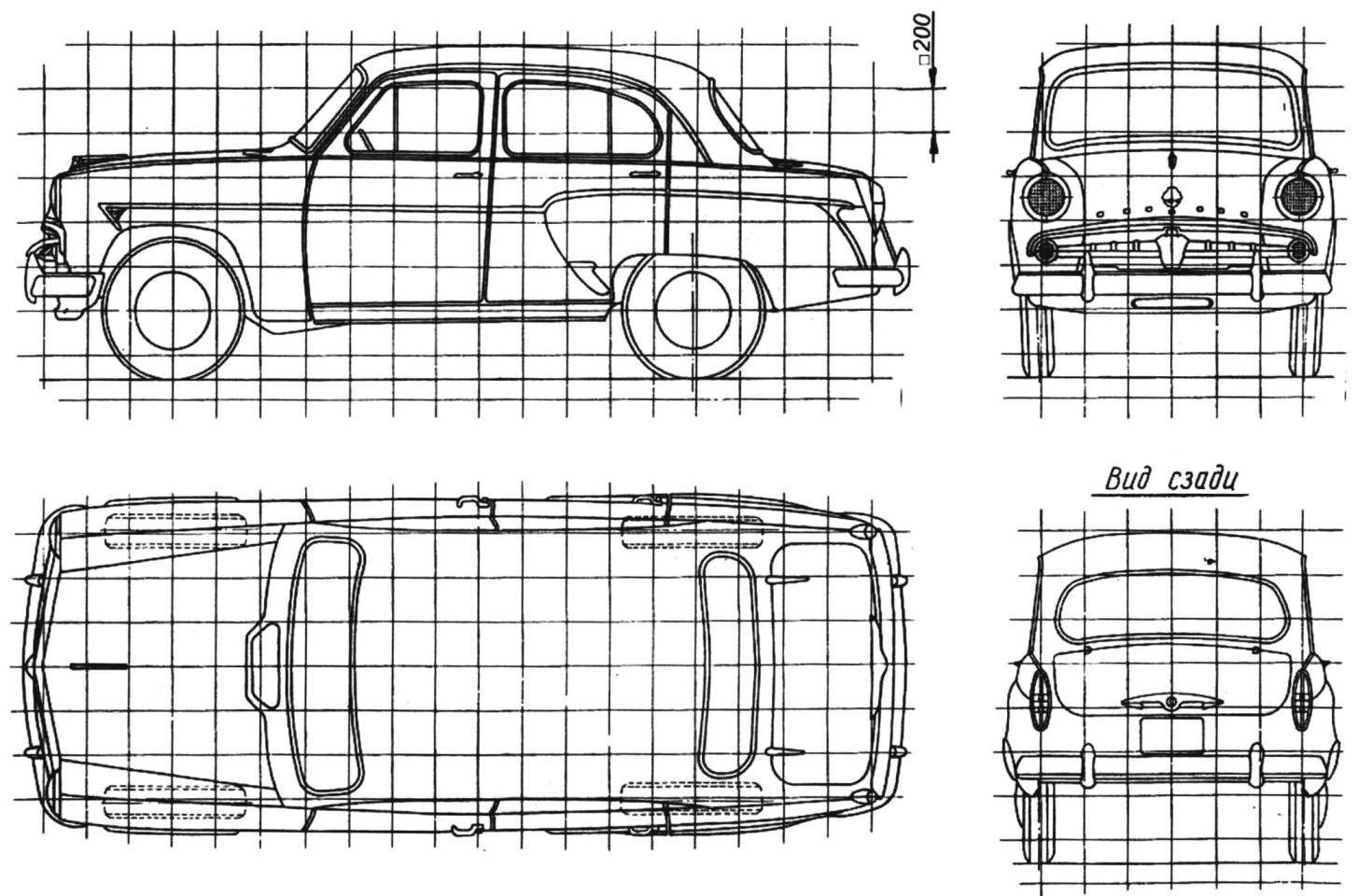 The geometric scheme of the car MOSKVICH-403

The chassis of the car MOSKVICH-403

The body of the car MOSKVICH-403
In addition to this, the cabin housed the radio type A-17A appeared chistianity a dual-band superheterodyne, designed to receive local and distant broadcast stations on medium and long wave.
The design of the front and rear doors of the body were virtually identical. Each consisted of two main parts — welded inner and outer panels. Key locked front only left door — the rest was blocked from the inside by turning the door lever to crack down.
The hood of the engine compartment — alligator type, it represented one big stamped part, to which to increase its stiffness was welded transverse and diagonal amplifiers. To the body the hood is suspended on the two inner loops and secured the lock in the front part. Handle lock actuator located inside the body. To prevent opening of the hood on the move if you make a mistake pulling the handles of the lock, its design provided a special guard.
The Luggage compartment located in the rear, unlocked by using the handle located under the rear seat cushion, right side. Interestingly, when closed, the tailgate is closed and the bracket rear registration plate, under which was located a tube neck of the fuel tank.
The radiator grille of the machines normal and export performance varied significantly. The first veneer was a hard stamped grille with only the top trim, and the latter of such pads was five. The facings were also the side trim strips that housed the sidelights.
Front seat with a skeleton tubular design had a total double cushion and two separate seatbacks that tilt forward to ease the passengers in the back seat, or leaned back. The seat was mounted on skids, allowing it to move forward and backward within 102 mm.
For body heat meant the heater mounted under the dashboard. It is based on a small radiator which receives hot water from the engine cooling system. Outboard air, coming through the hatch in front of windshield, by the fan passed through the radiator is heated and then enters into the cabin.
ENGINE. The car was equipped with four-cylinder inline OHV petrol engine model 407-D with a compression ratio of 7, working on gasoline with octane number not less than 72 units. Overhead valve engine with a compact combustion chamber and a liquid heating of the combustible mixture to ensure that the high for its time performance. The maximum power of the engine made 45 HP, maximum torque of 86 N.m.
The combustion chamber is a compact, poluchennogo type. Seat intake and exhaust valves made of heat resisting cast iron with high hardness. To insert them in the socket, saddle cooled in liquid nitrogen vapor to a temperature of -160 degrees, and the head was heated to + 200 degrees, which provides a secure fit saddles in the head. 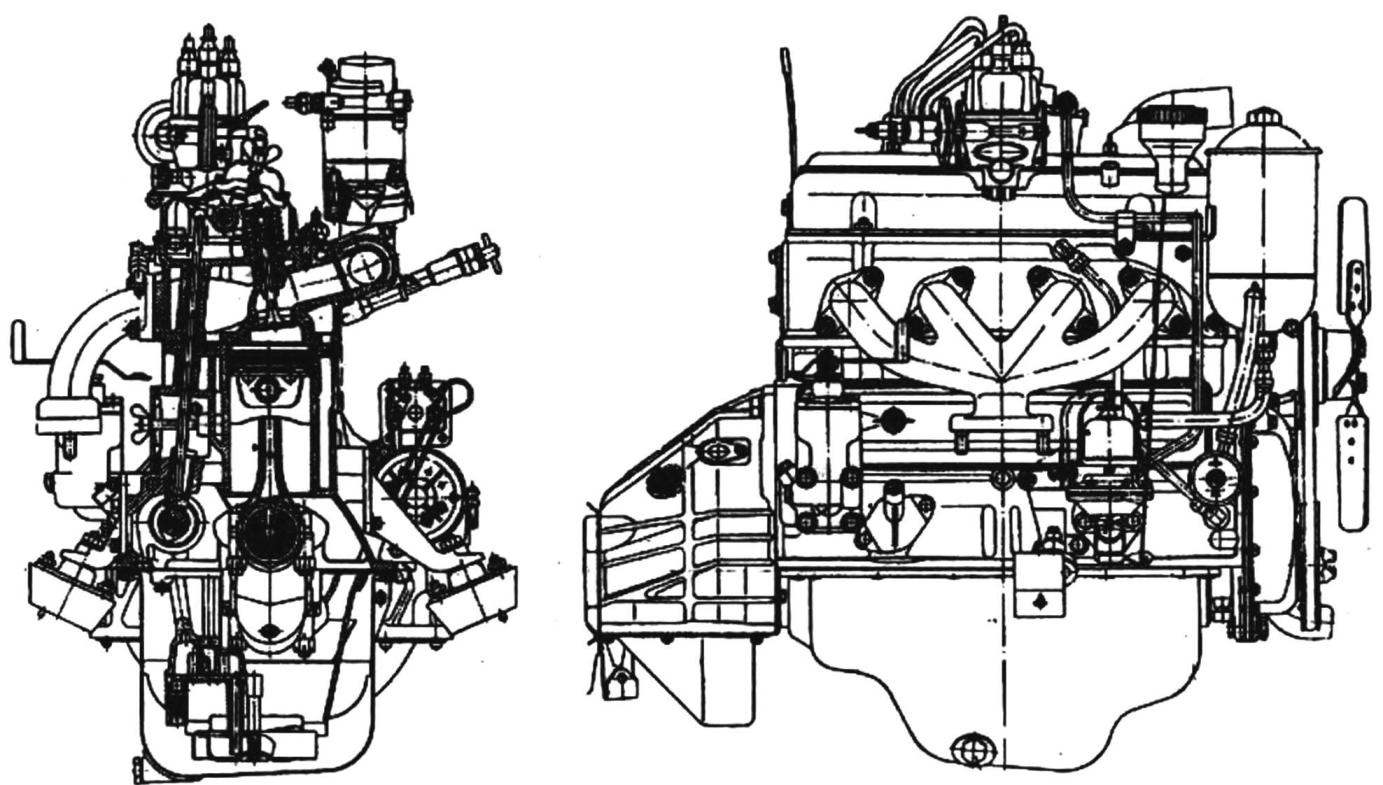 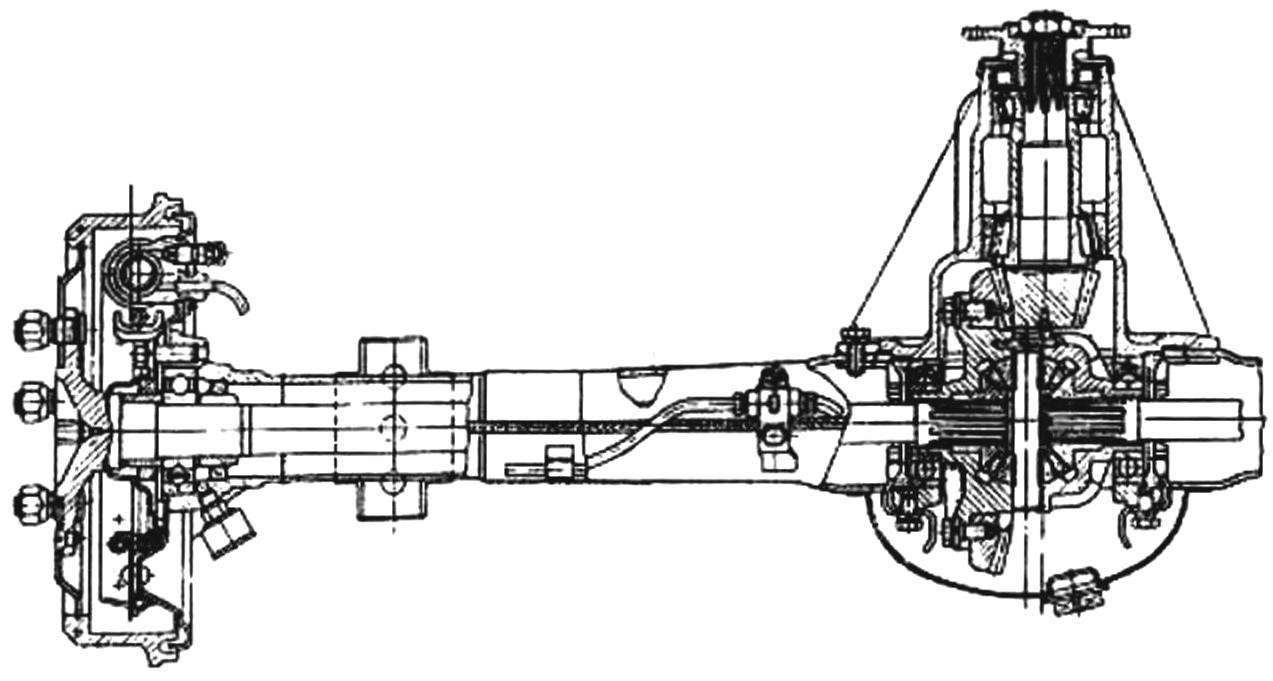 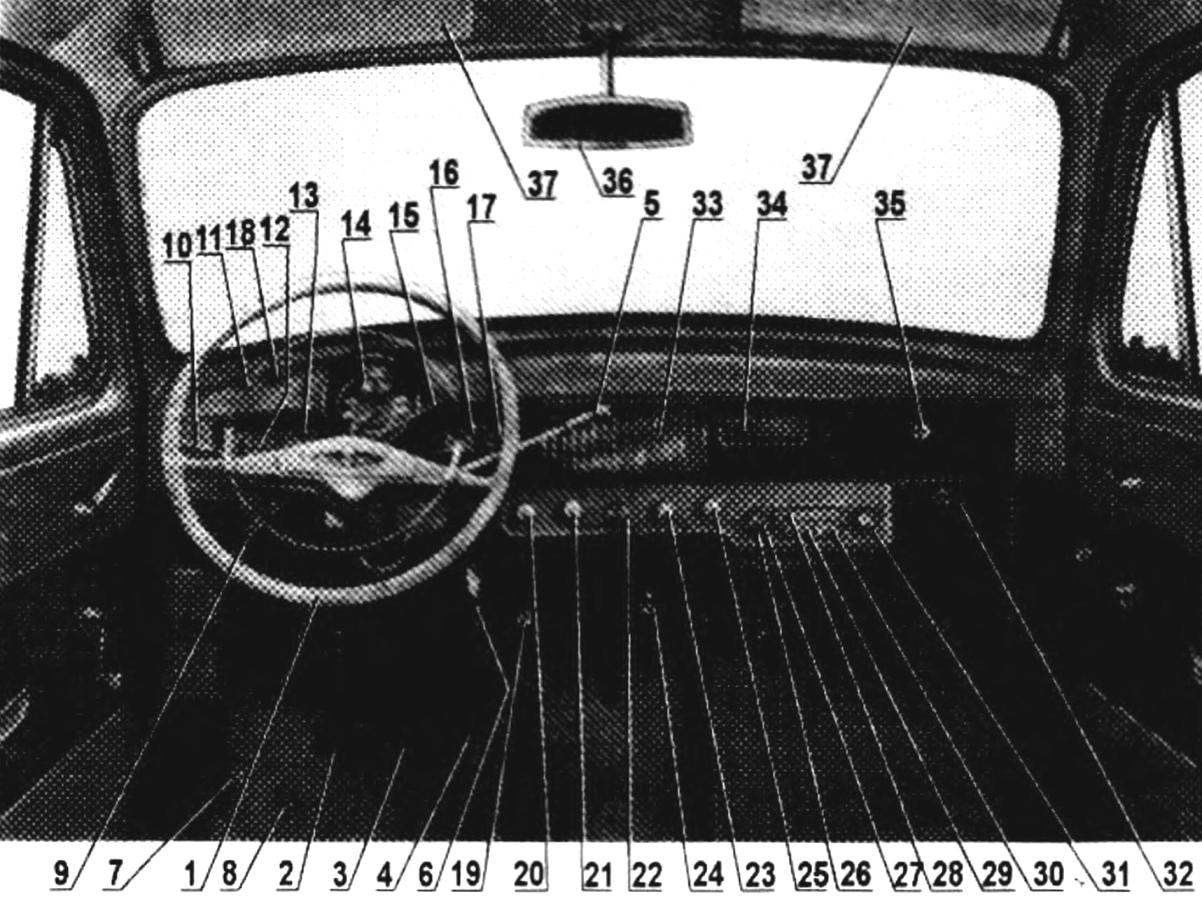 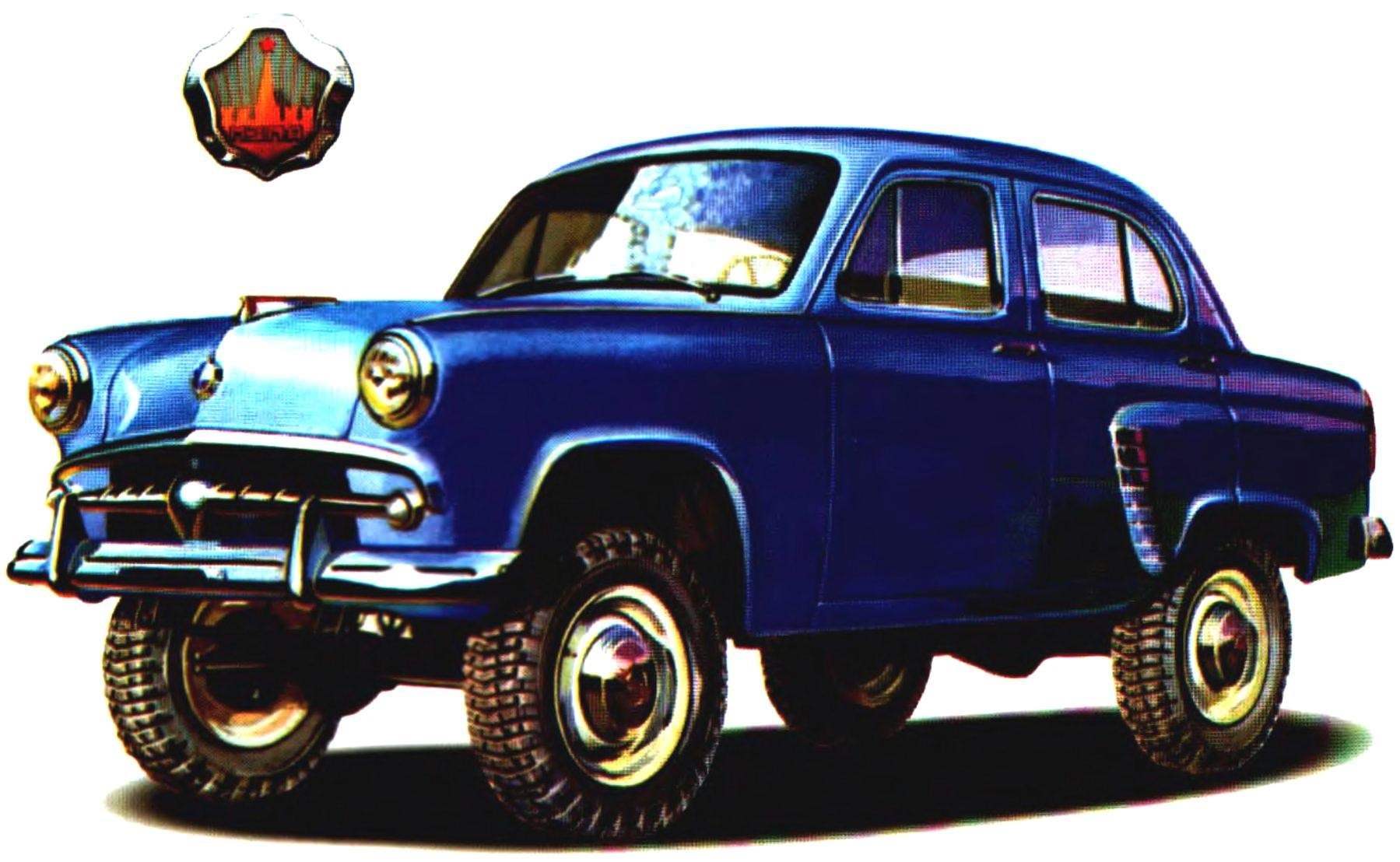 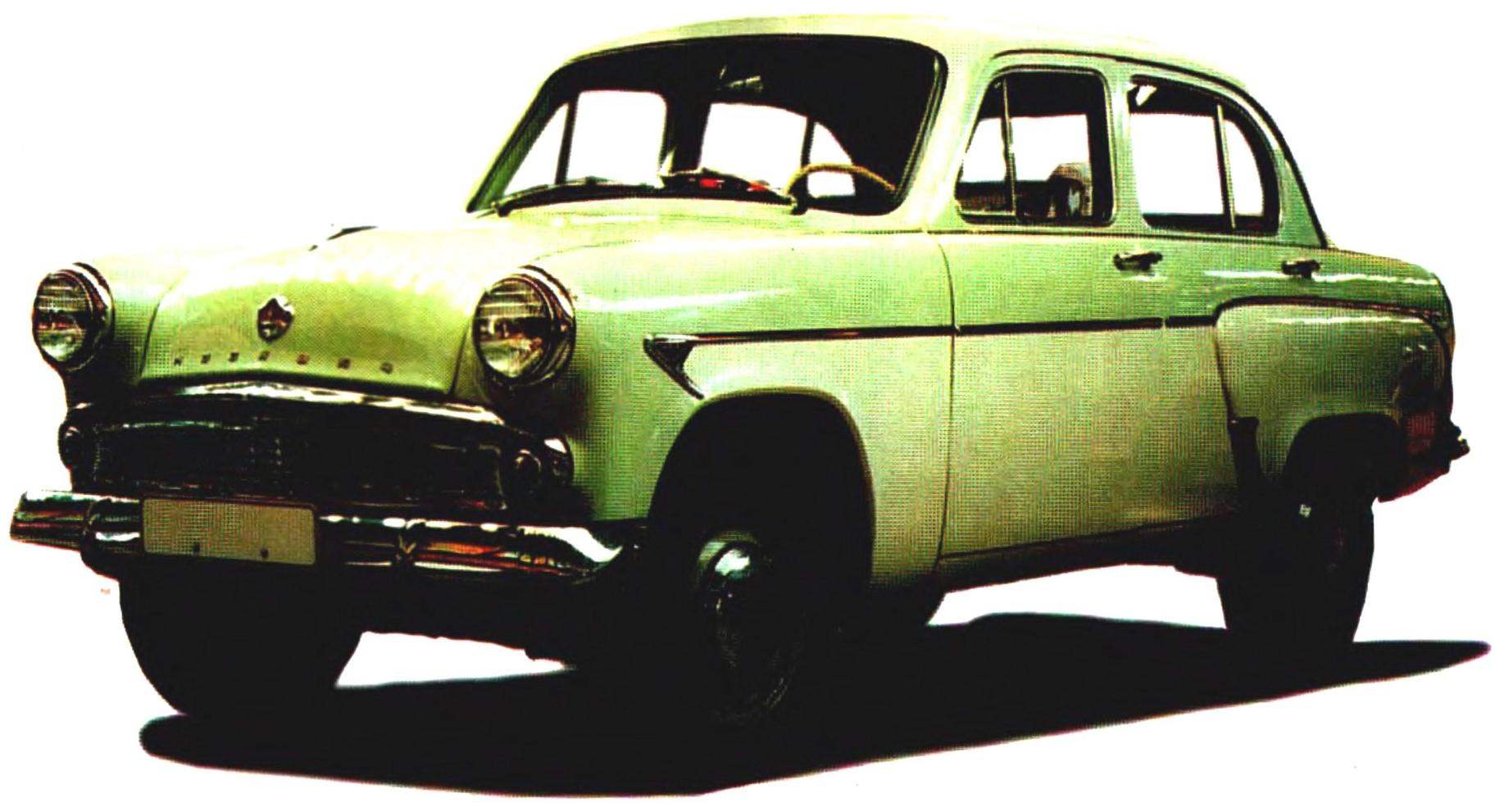