In fact, it all started with the bike. Or rather, since that day in the small town of Mlada Boleslav in the North-East of the Czech Republic released a Bicycle equipped with a small engine. To us, the current owners of mopeds, motorcycles and cars, became a little clearer as to why an ordinary phenomenon gave impetus to our conversation, explain that it was at the end of the last century, at the dawn of the automotive industry.
In a small plant in mladá Boleslav bikes did. But, of course, without engines.
And actually, why “of course”? Plant engineers were literate people, the internal combustion engine knew firsthand. In short, is ripe with all the conditions for the transition to the “motor trade” and lacked only a push of momentum, which was the appearance of a Bicycle with a motor.
That was the case, evidenced by the fact that shortly in the factory yard already growling first motorbike. It was followed by the second pattern, the third… And the eighth, as we now say, went to series. It was already quite a real motorcycle. Its engine (though with a capacity of only 1 HP) was placed in a special reinforced frame, world’s first Czech designers have used electromagnetic ignition from magneto, have developed a carb. Levers on the handlebars, belt drive on the rear wheel. In short, the machine was at the time modern, and to some extent reliable. It is not surprising therefore that the plant literally overwhelmed with orders for the new bike. Designers are confident in the attractiveness of the chosen path and actively engaged in the search for new product samples: first two-, then four-cylinder engines, then tricycles with a passenger seat in front of the driver — finally, a motorcycle with a side car. 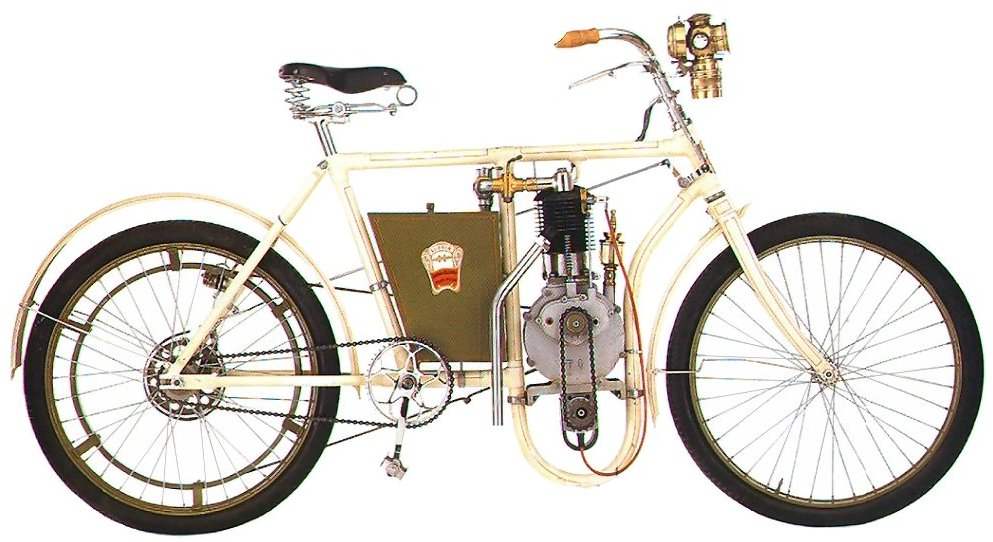 Motorcycle “Laurin and Klement” issue of 1898. 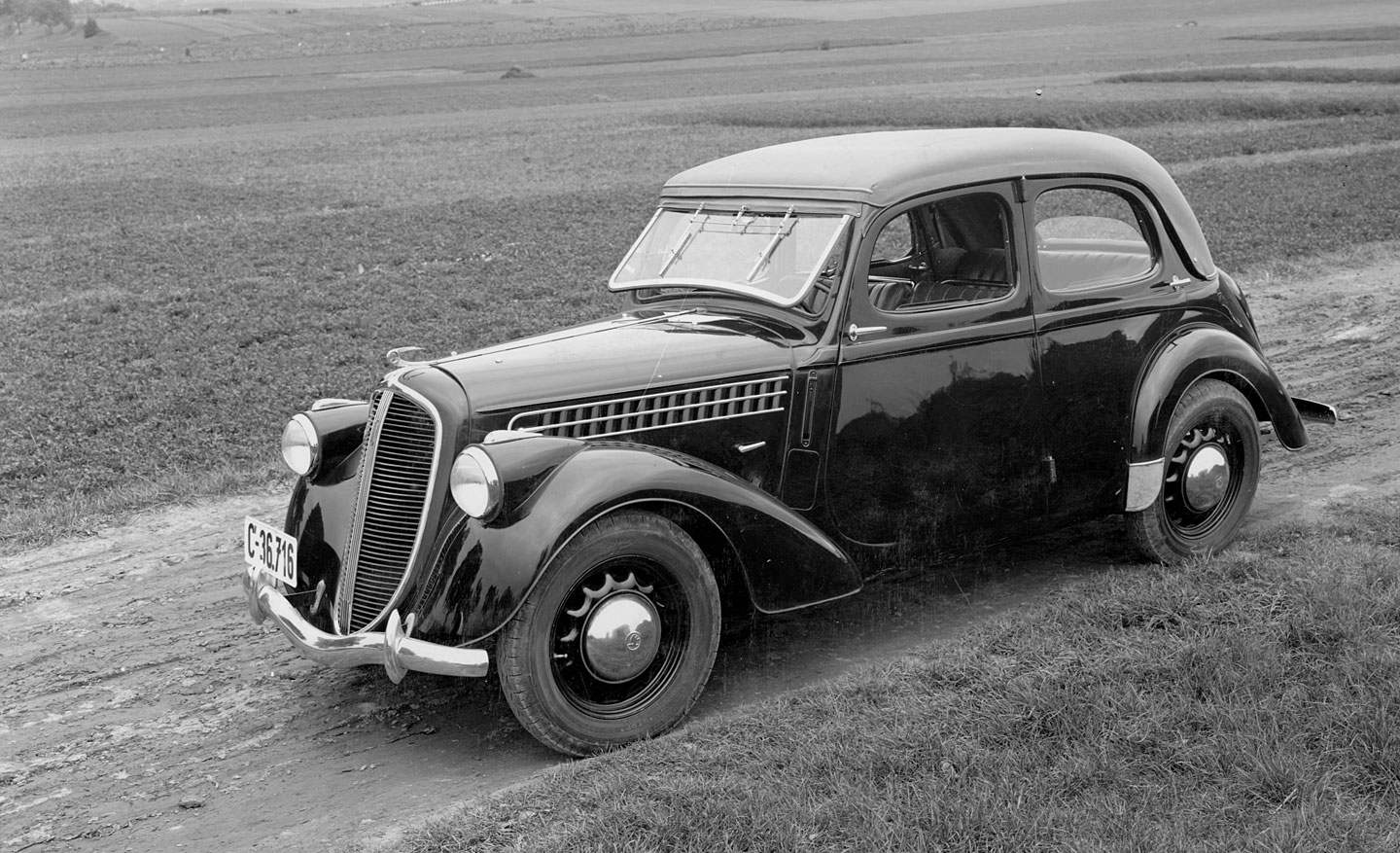 Car “Skoda-popular” issue of 1934.
When I think, how exciting for the designer was that age: any innovation become invention, a bold step has led to the discovery. But the difficulties facing those who took the first steps in the automotive industry, too, was considerable, because literally all you had to do yourself. No catalogues of spare parts or related industries, who supply tires, carburetors, magnetos, cables, finally. Nevertheless, annually, new models of the “Laurin and Klement”, as it was then called the factory, and conquered the world market.
The rapid development of automobile industry in the beginning of this century encouraged the talented Czech designers from the first steps to begin to design their cars. The first car saw the light in 1901, the next in 1905. We are now condescendingly chuckle over these machines — with their ridiculous “four-wheel” appearance, with wooden wheels, with driver, proudly seated on the box and open to all winds. Laughed at them then.
In the best case not be taken seriously. And they, sometimes due to the enthusiasm of its creators and support seeking sharp entertainment patrons, more and more powerful wave surged on Europe. More and more perfect machines, insatiable market. Here they already went in a taxi, to transport, in the army. (By the way, a lot of them were in parts of the Russian army before the first world war.) Meanwhile, the factory creates cars of mark “S,” which envisaged a lot of what then will be firmly established in the world of automotive engineering, for example, the Association engine, the clutch and the gearbox in one piece. 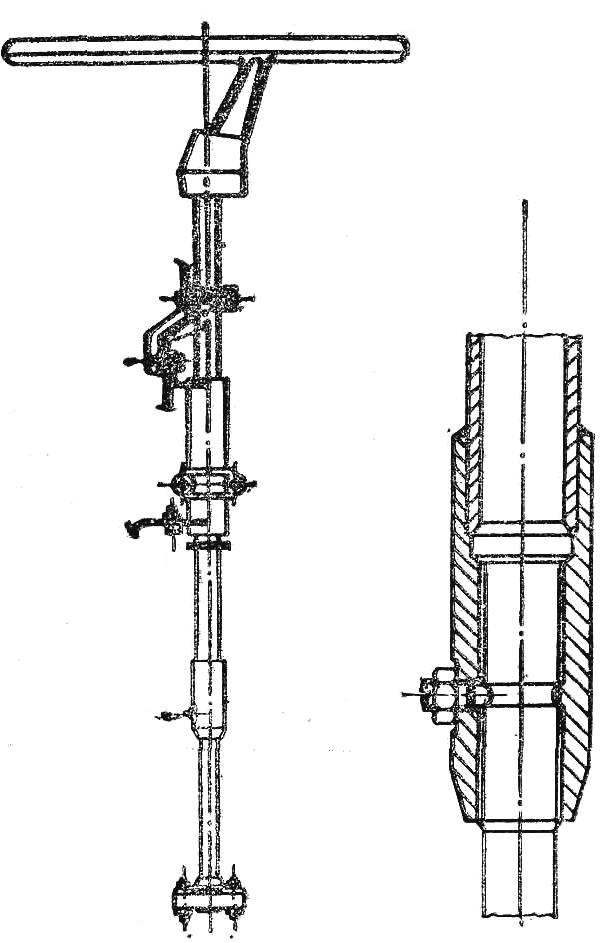 The interior cabin and instrument panel with the steering wheel of the car “Skoda-110 GT”. 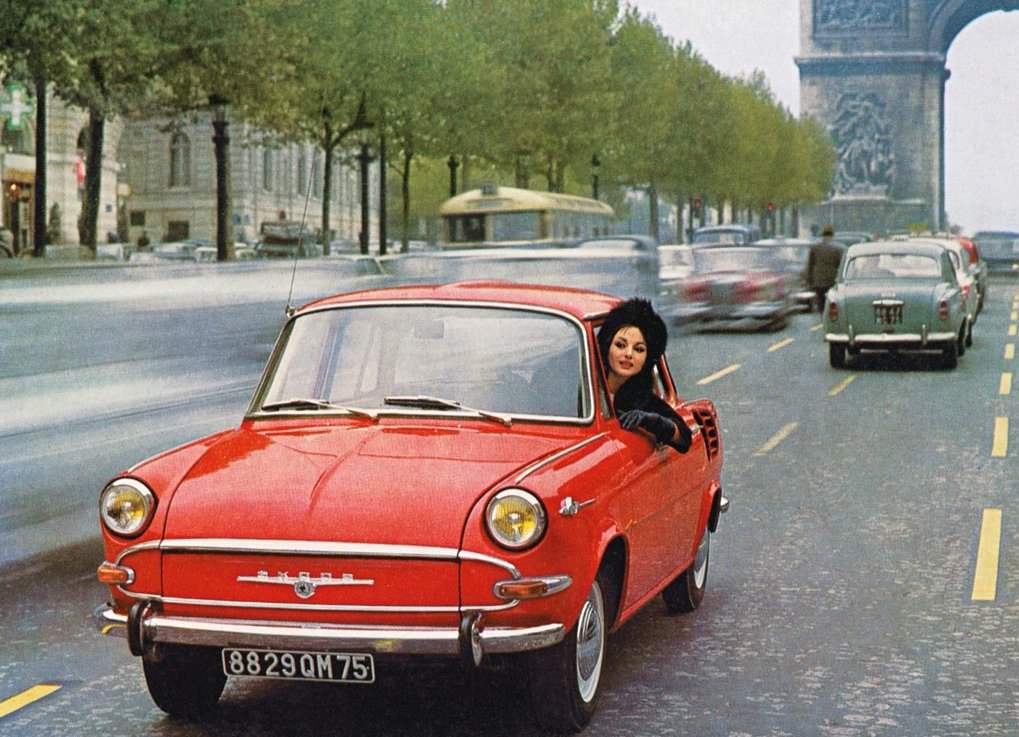 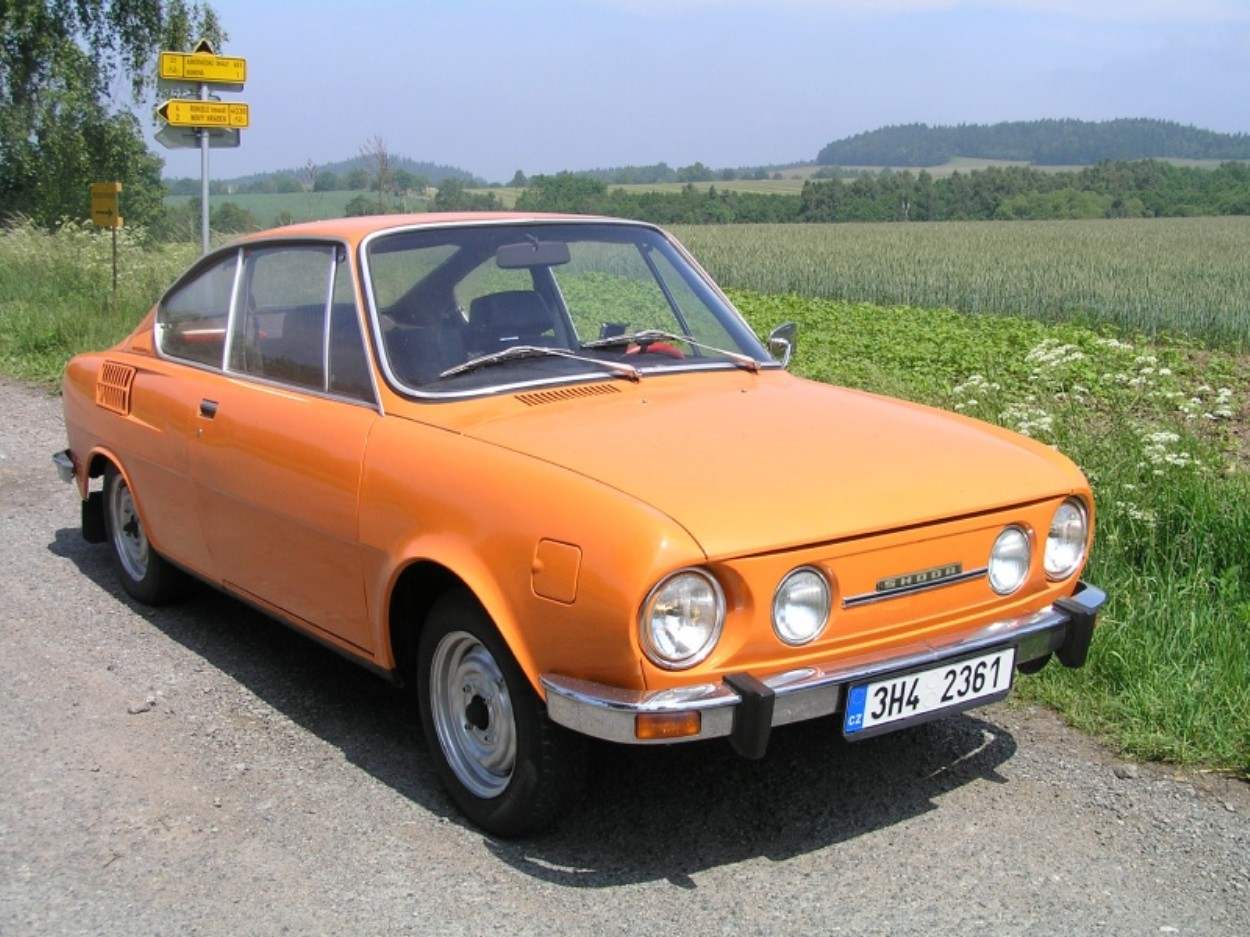 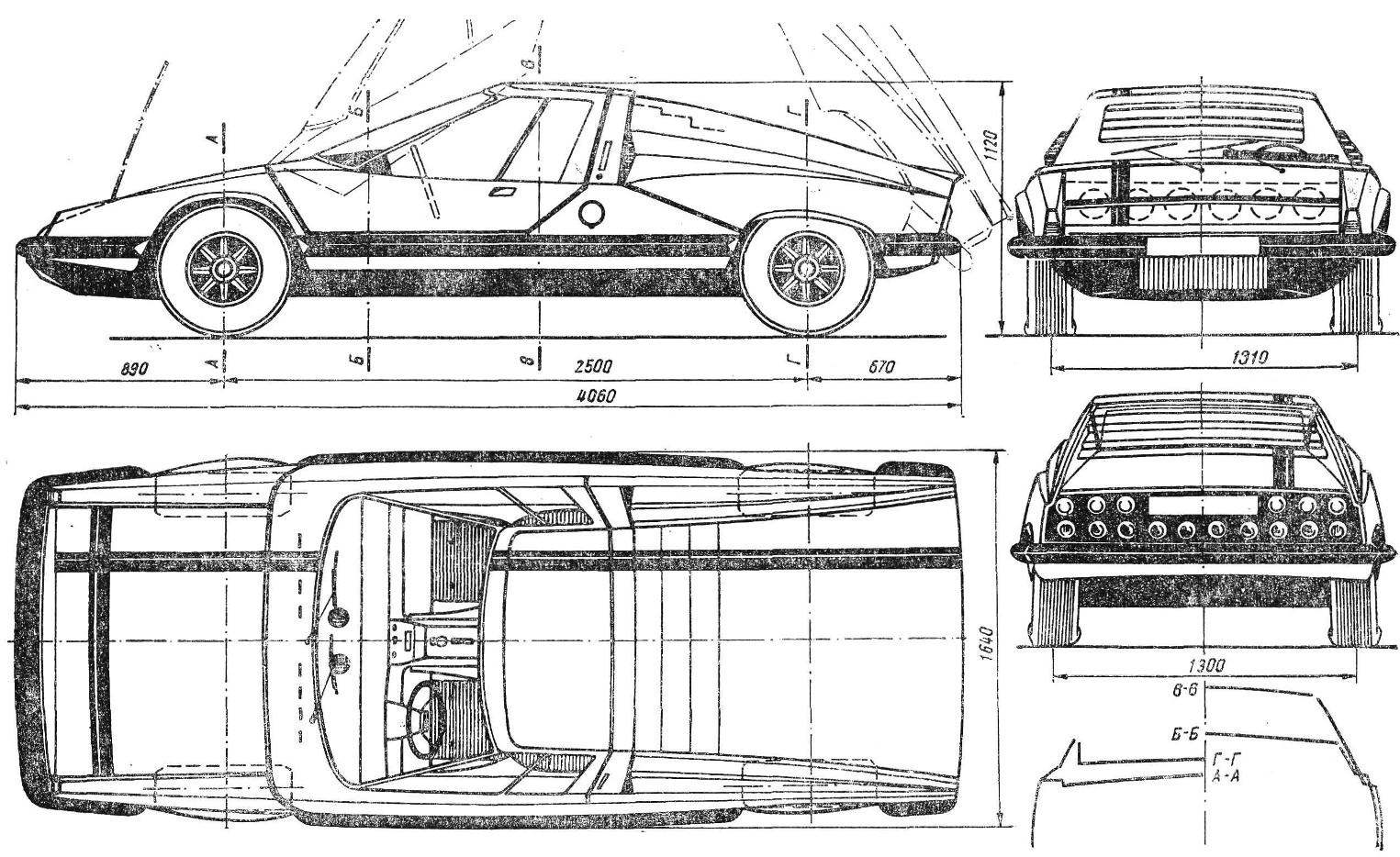 “SKODA-110 GT”
In fact, this is the background, although it is not the first motorcycle “Laurin and Klement”, are counting the time the automakers of the Czechoslovak Socialist Republic. The name “Skoda” these machines have after the merger mladá Boleslavsky plant with enterprises of the firm “Skoda”, powerful machinery factories, had a good material and technical base. Heavy trucks, cars spetspitanie, heavy tractors, plows and engines are only the main directions of the products of this company.
The creation of new designs — “Skoda-420”, “standard”, “popular”, “rapid”, meet global requirements, have paved the cars of Czechoslovakia, a wide road to the European market. (By the way, the last two models even today no-no and will appear on the roads.) The second world war not been in vain for the famous giant. Literally the last day of the war the plant “Skoda” was bombed by the raids of the Anglo-American aviation. Czechoslovakian automakers had to raise them from the ruins, to breathe in Skoda new life, to bring its products to its former prestige.
Started with a simple with advanced machines “popular”, is produced in various modifications. New bodywork, four-speed gear shift, the shift lever switch under the steering wheel (which was the most convenient), the increase in engine power up to 32 PS — all this allowed “Skoda” to return to the previous position.

The latest achievements of engineering thought is concentrated in this sports car. Modern forms, a variety of signal nodes, significant improvements in engine and chassis that’s the main thing that characterizes the “Skoda-110 GT”, new automotive socialist Czechoslovakia.
The following machine Skoda us. already well known: it is the passenger of “Skoda-1202”, which can be found on our roads, “Skoda-Octavia” and “Skoda-Super”. Finally, recent years saw the release of global standards modifications “Skoda 110R coupe”, “Skoda 100L” and their varieties. In contrast to the first postwar samples of these machines with an unconventional rear-engine, dual carburetor. One of the important features of the new machines — safe steering column, shown in the figure.
Further development of the design ideas embodied in the cars produced in Mlada Boleslav, is the “Skoda-110GT”, drawings which we reprint from the magazine “Modell bau heute”.
Suspension of this car is identical to the modification of the “Skoda-110P”.
Sports cars — a favorite theme design designers and engineers of “Skoda”. Of the most famous we can mention type “110.” — modern high-speed machine with water cooling engine, can reach speeds of over 145 km/h. the Latest — “Skoda-110 GT”, which has concentrated the latest achievements of engineering thought. This is an experimental car, and the search was mainly in the direction of further improvements to engine and chassis and new body styles. Conceived this car as a prototype several solutions, which are then embodied in the prepared to release the production model.
When you look at the pictures and drawings are above all noteworthy, is the original body with rapid lines, all pointed, equipped with multiple reflectors and powerful lights, which is dictated by a sports car. Body — bearing, designed for two passengers. Originally the decision of the cab — it rises up and forward with a simple press of the hand control lever. The car speeds from 0 to 100 km/h in 15,3 s.
TECHNICAL CHARACTERISTICS OF THE CAR:
Length, mm…………………………………4060
Width, mm………………………………1640
Height, mm……………………………….1120
Ground clearance, mm……………………………..150
Speed km/h…………………………..180
Weight, kg:
dry nezapravlenny…………….820
kitted out with passengers……1075