The main parts of the design-balsa ribs, pine spars and foam sock. Working on the model (or, as happens most often, on a series of models) it is better to start with the production with the help of Thermaltake it socks. Construction of the “ball”, melkosortnogo packing or foreign blue foam on metal templates cut blanks length of about 500 mm. the Best material, it is necessary to recognize, is the blue foam. Although it is more expensive, its advantages are invaluable – in the cut he almost has no pores. Hence, the increase in the mass of glue when the wrapping paper will be lower. In addition, at low density and stronger than other varieties.

Front and rear edge balsa. The Central rib consists of upper and lower fake shelves, between which the jumper. After assembling the frame, the toe of the wing is glued across the loop (i.e. including the surface forming the back wall of the spar) paper for recorders on the PVA glue. If this material can not find, can, in extreme cases, use drafting tracing paper, which can be found in bookstores or office supply stores. 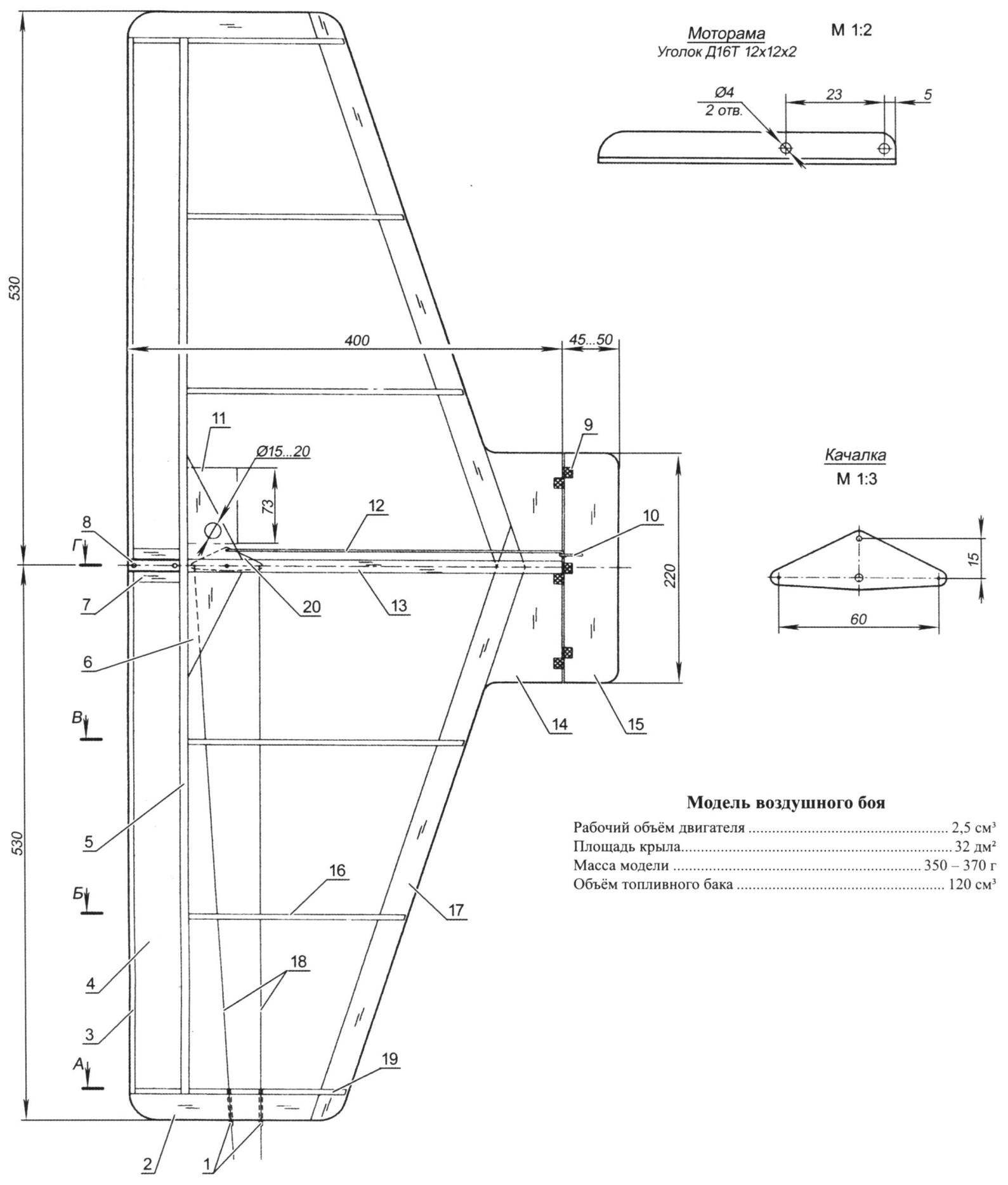 Control line model class F2D:
1 – springs (from a car oil seals outer diameter of about 3 mm); 2 – ending (balsa s5); 3 — the leading edge (balsa s5); 4 – the forehead of the wing (foam); 5 – shelf side member (pine 7×3); 6 – solitaire (balsa s3); 7 – Polonnaruwa (balsa s10); 8 – fastening plate of the motor and rocking (Linden s12); 9 – tissue or standard plastic loop hinge; 10 – hog (PCB s2); 11 – container fuel tank (pressbeton s0,5); 12 – pull rudder (hard wire of aluminum alloy Ø4); 13 – shelf Central rib (Linden 12×3); 14 – shank (balsa s5); 15 – the Elevator (balsa s5); 16 – rib (balsa s5); 17 – trailing edge (balsa s5); 18 — thrust rocking (cable Ø0,6); 19 – end rib (balsa s5); 20 – rocking chair (D16T, s2)
The fuel tank is a classical system of forced delivery of fuel. The cylindrical body of the canister for the fuel tank made of pescarmona thickness of 0.5 mm and covered on the inside Himeko. In the wall of the container is cut a window through which the rubber tank-the nipple is laid inside of the canister. Note that when assembling the model area of the canister, surrounding the window, must be securely pasted on the inside of the power of the Central plate of the wing then through the junction of the fuel can not get into the cavity of the wing.
The model is fitted by a Mylar film with a thickness of 0.04 – 0.05 mm. should Not be especially zealous provlakas this foam sheathing on the forehead, so as not to cause subsidence of fusible material. Aisle seat steering thrust through the wall is framed with the thick tape.
N. SAMONOV