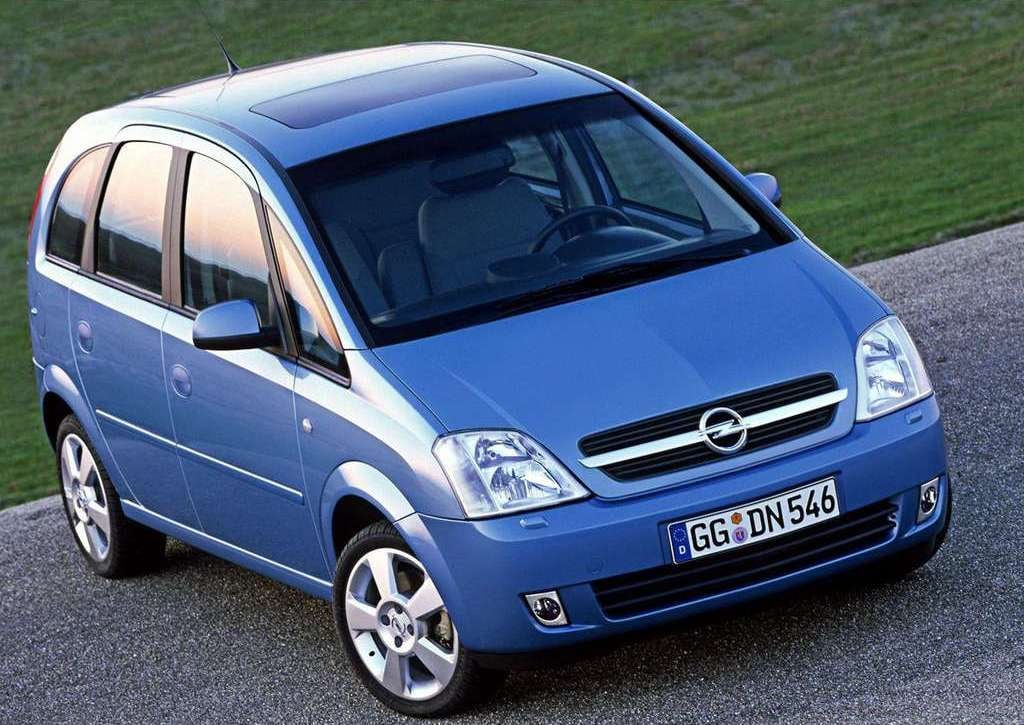 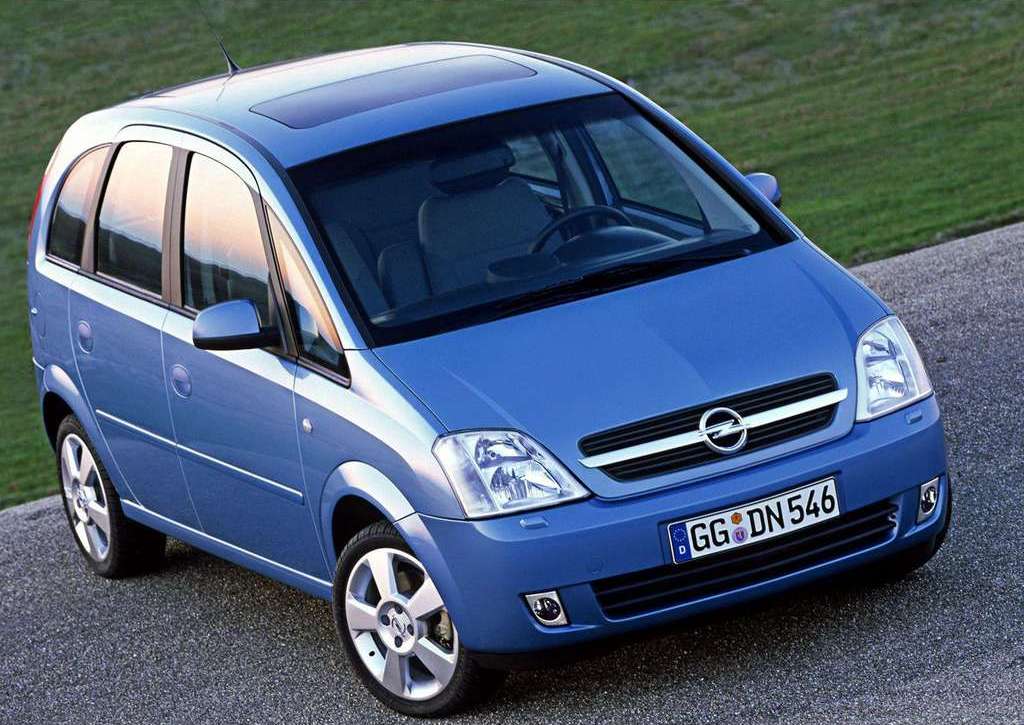 Family compact MPV OPEL MERIVA. One of the most promising directions in the production program of the German company Adam Opel AG will be in a future edition of one-volume cars. And it’s quite reasonable — today, a growing number of Europeans buy such cars as a family car. Judge for yourself: if in 2002 the share of such cars in Europe amounted to 1.2 million copies (or 7.7%), for 2007, marketers are predicting that increase to 2.3 million copies (13%).

Changing customer demand has prompted the marketers of firm Opel to elaborate a five-year plan for the reconstruction of the model range of produced cars, giving him the name “Olympia”. In accordance with this plan the company will annually produce at least two new models. As far as the types created…
Examining the range of produced cars, the marketers divided the stream into three neravnovesnykh automotive channel machines traditional machines and innovative machines niche. At the same to traditional cars and they took the whole “classic” sedans, hatchbacks and station wagons. To innovation — automobiles with custom bodies, increased capacity and four-wheel drive SUVs. Well, to niche machine limited demand. In this case, if today the share of each type in issue of the company Adam Opel AG ratio of 80:13:7 by the end of opalewski five-year plan, the ratio of the produced cars will be 40:40:20. That is why in relation to innovative cars in the most promising direction of the company will be the release of the monocab of different sizes and purposes. According to company President Carl-Peter Forster, about half of those buyers who first decide to buy a minivan, choose the OPEL MERIVA. All in all, the company plans for 2005 is to sell 800 thousand machines of this type.
In the late 90-ies of firm Opel to study consumer demand for new for the European market cars have released the one-volume microvan OPEL AGILA in the European size class A. Interestingly, the car was developed by Opel for the firm Japanese company Suzuki, which had considerable experience in the creation of such machines. The car differs from similar models Japanese SUZUKI WAGON PLUS is that the power units developed by Opel. Going these machines in the Polish branch of the company in Gliwice. AGILA has excellent maneuverability, has a very small size, it comfortably seats four people, making it very attractive to customers as a city car. OPEL AGILA is equipped with engines working volume of 1.0 and 1.2 liter capacity, respectively, 58 and 75 HP with manual gearbox. 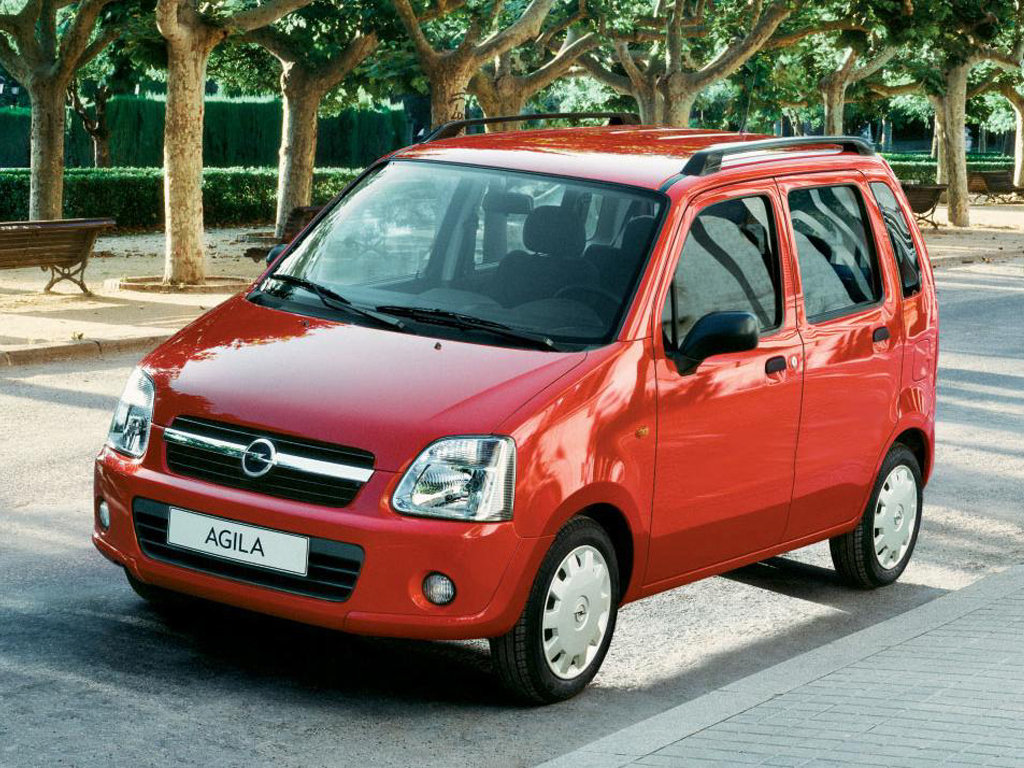 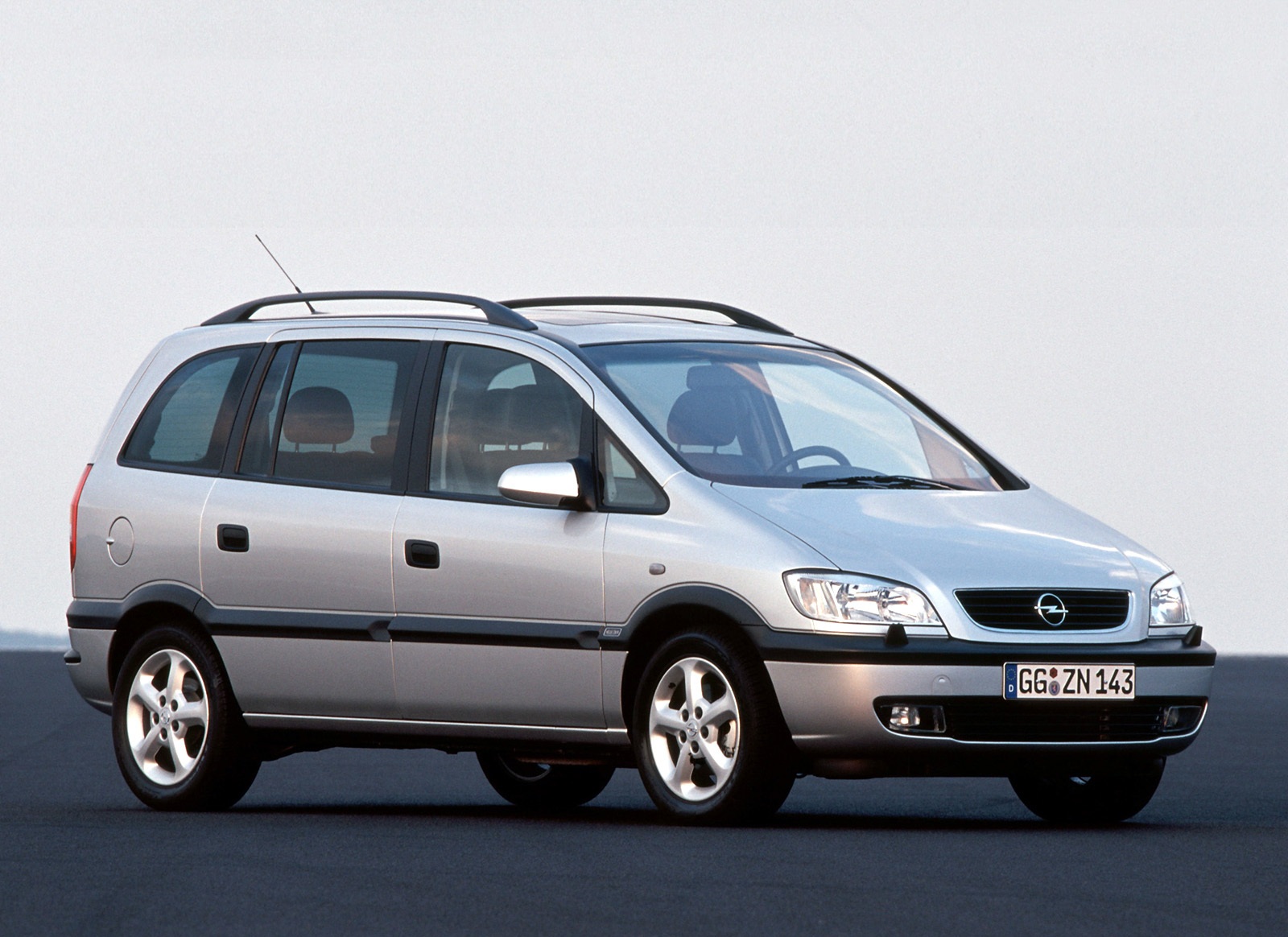 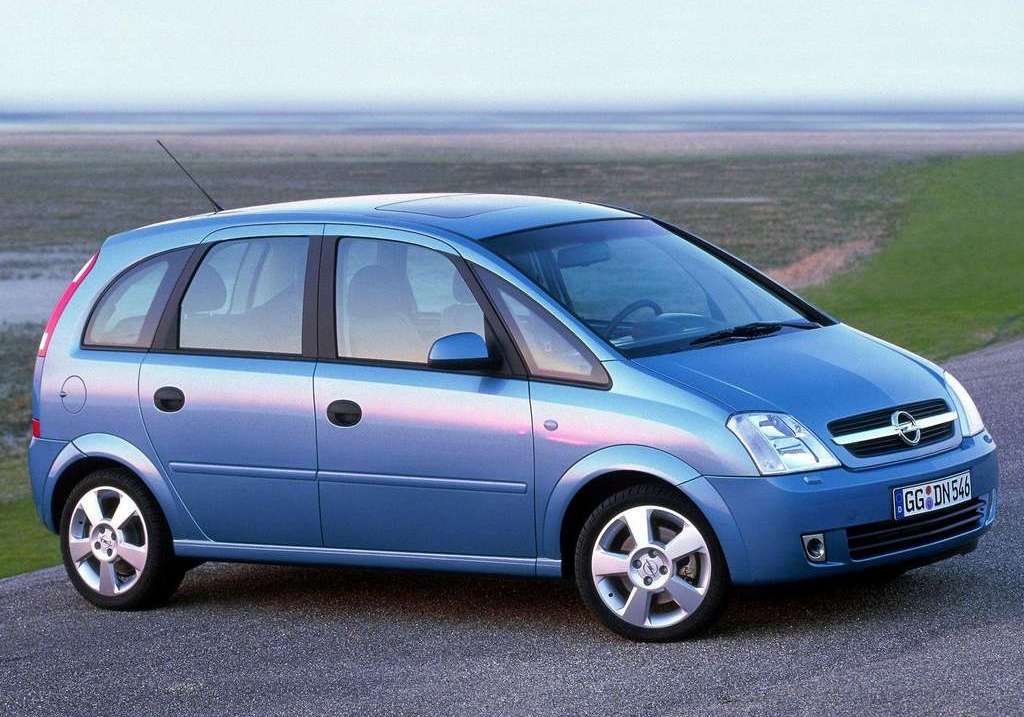 In the same period, the firm released another monocab — the seven-seater OPEL ZAFIRA with engines working volume of 1.6, 1.8 and 2.2 l Car based on the platform of the OPEL ASTRA became the sales leader in its class, to fully realize the formula of “consumer quality — price”: with almost the same technical characteristics that have similar monocab VW SHARAN, OPEL ZAFIRA price is significantly lower.
I must say that the market positively reacted to the emergence of microvan OPEL AGILA and the OPEL ZAFIRA minivan: over the past four years has sold about 210 thousand and 825 thousand first second. This allowed the firm to begin the design of the model of the European monocab model class — small but roomy compact MPV OPEL MERIVA, able to compete not only with “classmates”, but with larger cars such as the RENAULT SCENIC or OPEL ZAFIRA. New compact van, who is in the lineup of Opel between microvena AGILA and ZAFIRA minivan, designed for the most mass market — the middle class.
To accelerate the development of OPEL MERIVA designers have used the previously created nodes and aggregates. In particular, the engine, gearbox and suspension, mounted on a special frame, and chairs and ventilation system are the same as those manufactured for the OPEL CORSA — hatchback European dimension V. semi-class Rear suspension with linked arms — the one that is installed on OPEL ASTRA and OPEL ZAFIRA. Electronic components are the same as those of the new OPEL VECTRA.
Standard minivan includes antilock braking system ABS prevents the wheels from locking during emergency braking, brake distribution efforts EBD (Electronic Brake Distribution), helping to keep the car on the strip route with a sharp deceleration. Additionally, the vehicle may be equipped with an electronic stabilization system ESP (Electronic Stability Program), intended to retain the machine on the rate of motion for the drift using the auto targeted braking of individual wheels. The basic equipment of the OPEL MERIVA also includes front and side airbags. Among the options are one or two solar sunroof and Park Pilot, greatly facilitates the driver Parking, reversing, side curtains security, and xenon headlights.
Ready to use “stuffing” has allowed designers all forces to focus on the creation of the body. The main aim was the most efficient use of its interior space. To make this possible, increasing the wheelbase and ultimately having compacted engine compartment. Compared with the basic OPEL CORSA, the wheelbase was increased to 240 mm, and the total length of the machine 4042 mm When the wheels of the car have been located almost at the corners of the body, fully freeing up space to accommodate passengers and cargo. 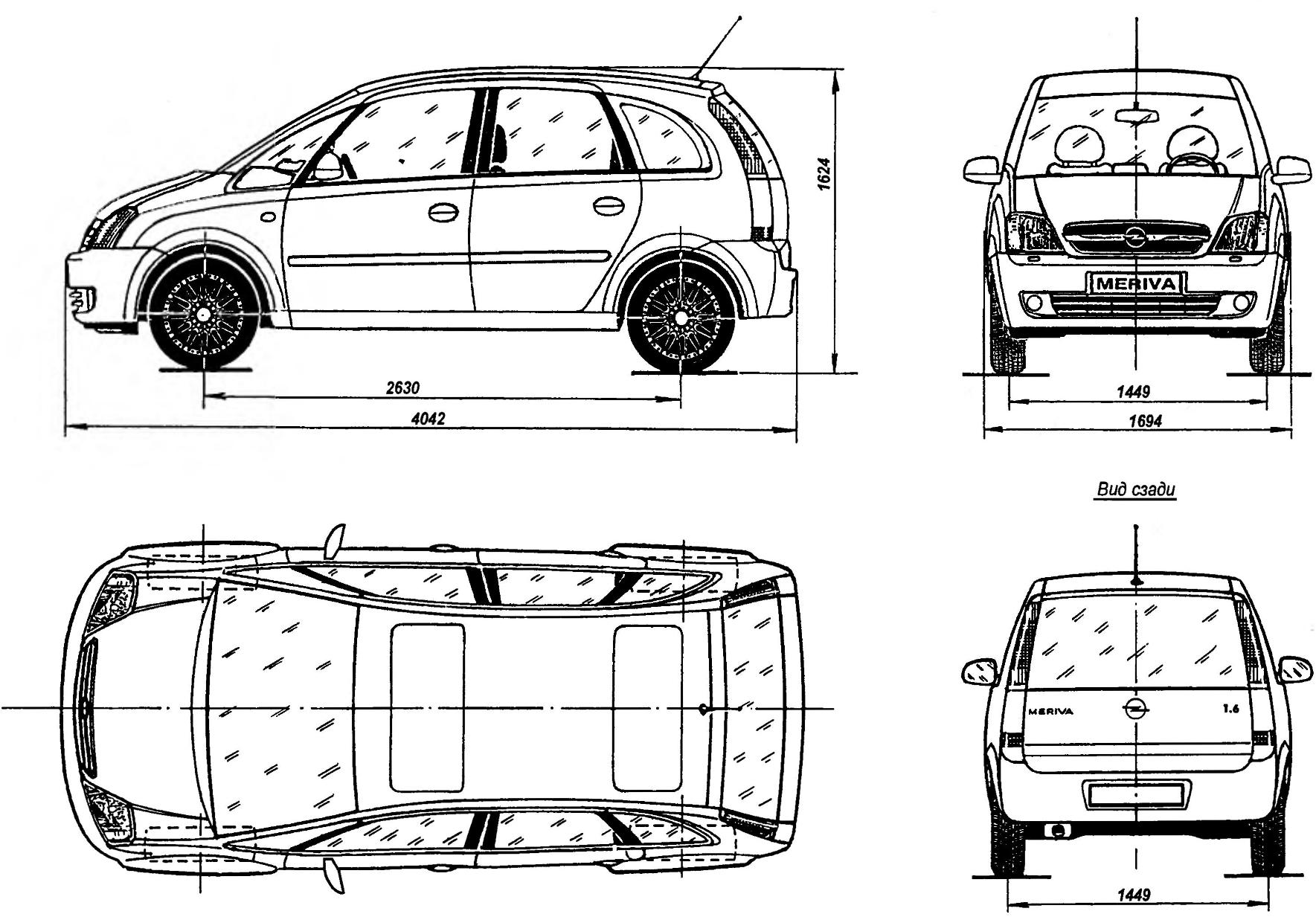 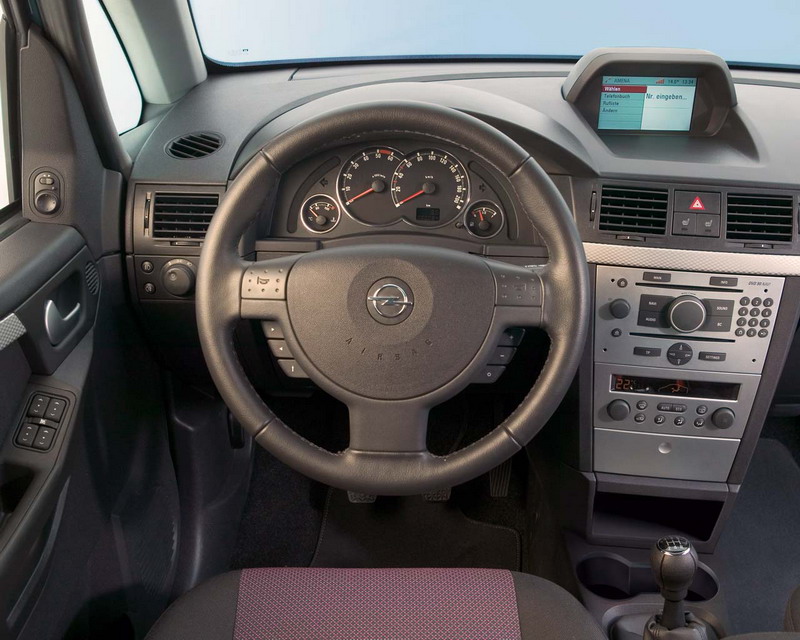 The interior of the front of the cabin 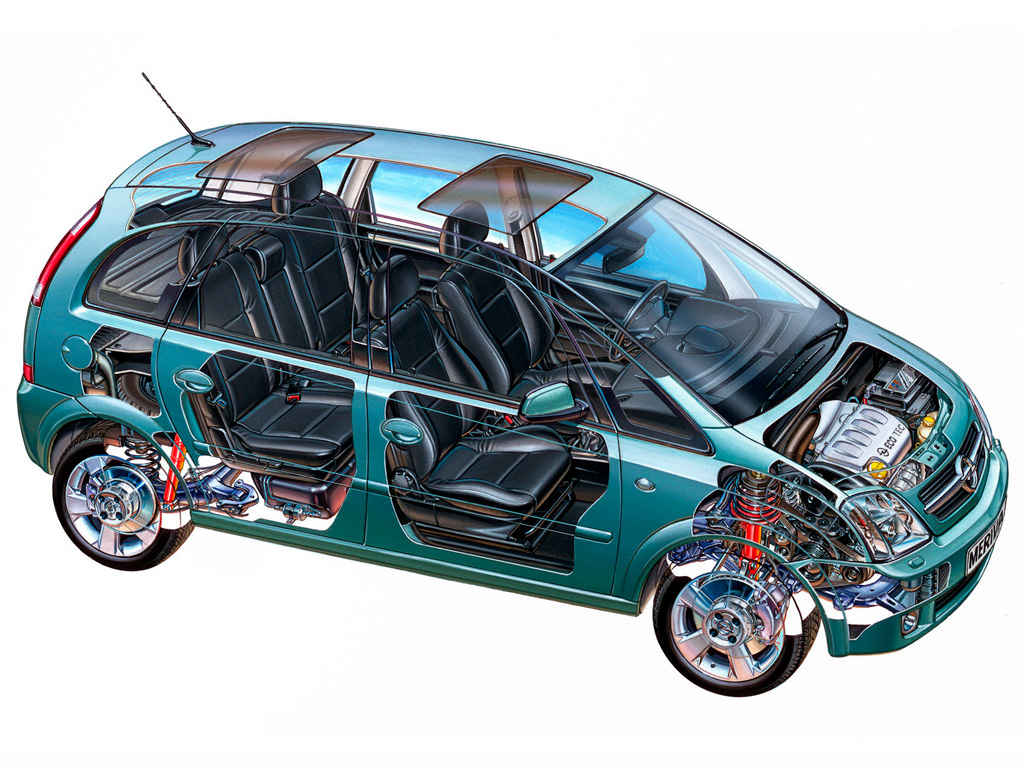 Suspension OPEL MERIVA
The body turned out and is short and high, but its CX — drag coefficient — was surprisingly low, only 0.32 mm. But the free space should still be spent wisely. For this firm Opel ordered the company Jonson Controls special multifunction folding seats FlexSpace (eng. — flexible space). Rear sofa consists of three unequal sections — the narrow and wide side. If you sit in the back two, the Central section of the sofa can be folded, and the remaining two to get closer, move back, and also change the position of the backrest. If you need to transport cargo, all three seats can be folded to form a flat cargo platform. The Luggage compartment in this case is 1.4 m3.
Well, if you remove the forward right front seatback, and the amount of Luggage you can bring up to 2 m3, and in the cabin will comfortably accommodate loads up to a length of 2.4 m. the actual Capacity of the boot is 0.35 m3.
When creating bodywork specialists put a lot of effort to ensure the safety of passengers. In the end, the results of the test EuroNCAP the car received four stars out of five.
Driver’s seat ergonomics is thought out very carefully — the controls are grouped in accordance with the logic of their use, the steering column is adjustable, the steering wheel provides special tabs for a secure grip. Interestingly, on the steering wheel are buttons by which the driver can adjust the audio system. Test point pleasant “rigidity” of the steering wheel while driving, combined with good feedback. The front seats have noticeable lateral support, landing them high, convenient.
Technical characteristics of OPEL MERIVA compact MPV 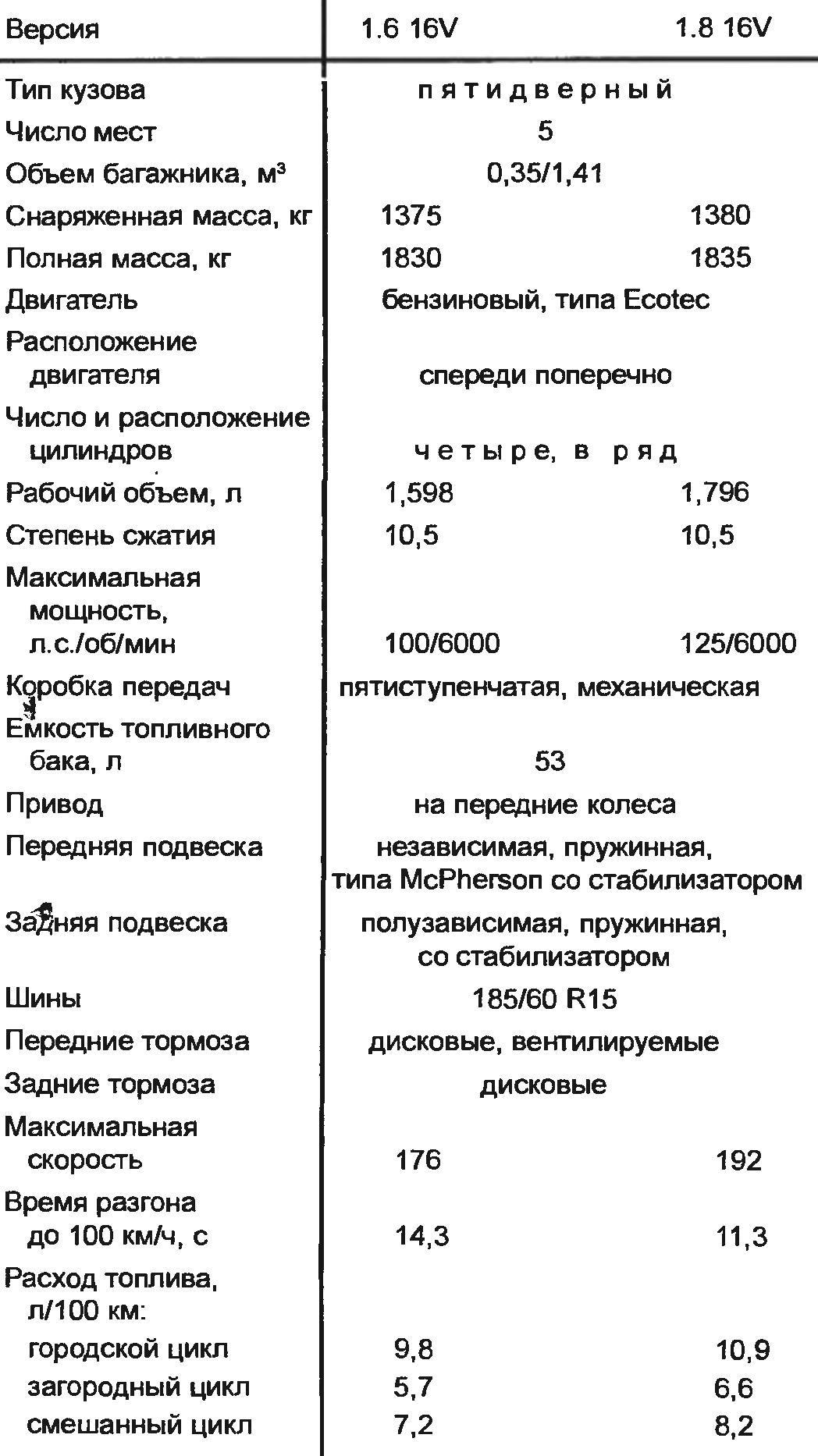 In the center console is placed a CD player. In the upper part of the LCD display, which displays evidence of onboard computer and navigation system. There are also buttons control electronic climate control and a navigation system. The instrument cluster with dials, edged with metal, borrowed from the OPEL CORSA, beautiful and informative.
Production of the compact MPV is maximized and the Spanish branch of the company under Opel Zaragoza. The estimated production is about 150 thousand cars. And at the plant of General Motors in são josé DOS Campos (Brazil) is going to exactly the same compact MPV called CHEVROLET MERIVA.
Say that to Russia MERIVA will be available in a “modest” version with a 1.6-liter engine capacity of 100 HP— one of the best in the whole range opalewski engines, with manual transmission. Price compact MPV in our market will make about 15 thousand dollars.
I. EVSTRATOV