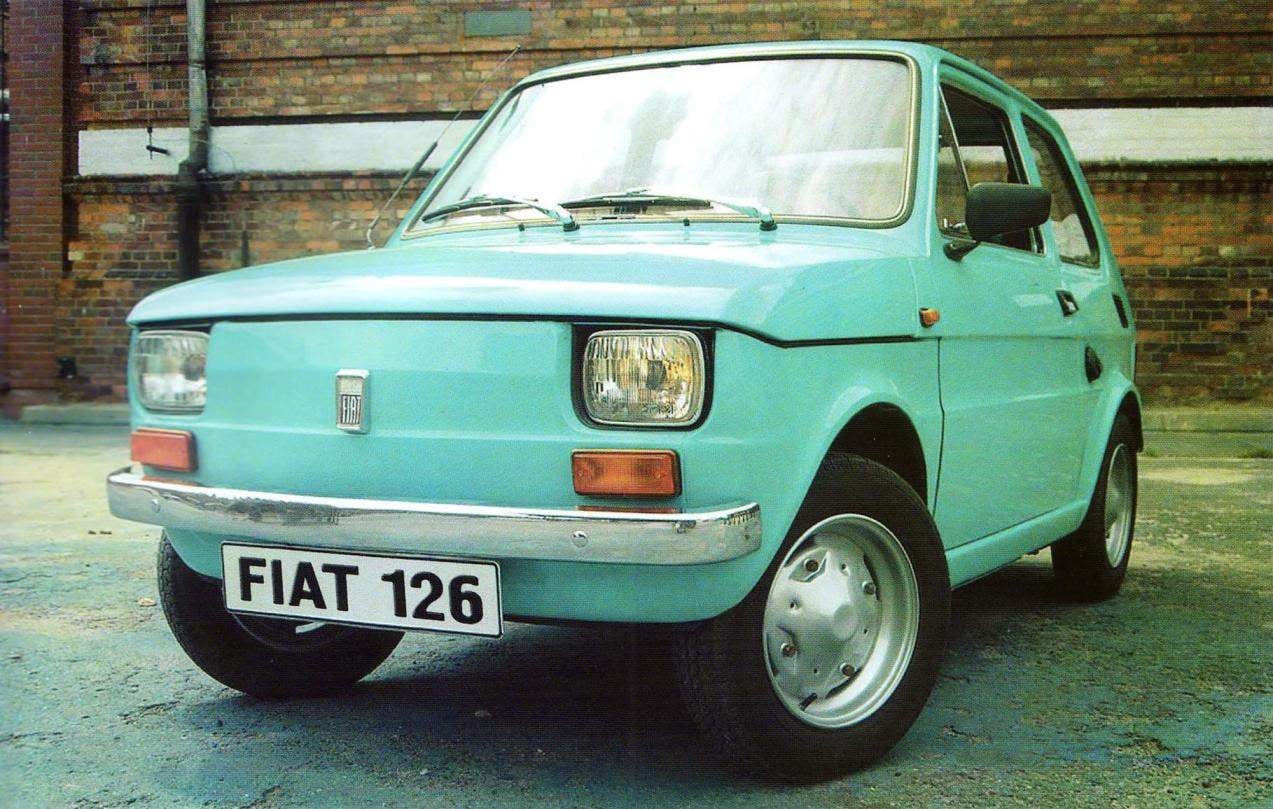 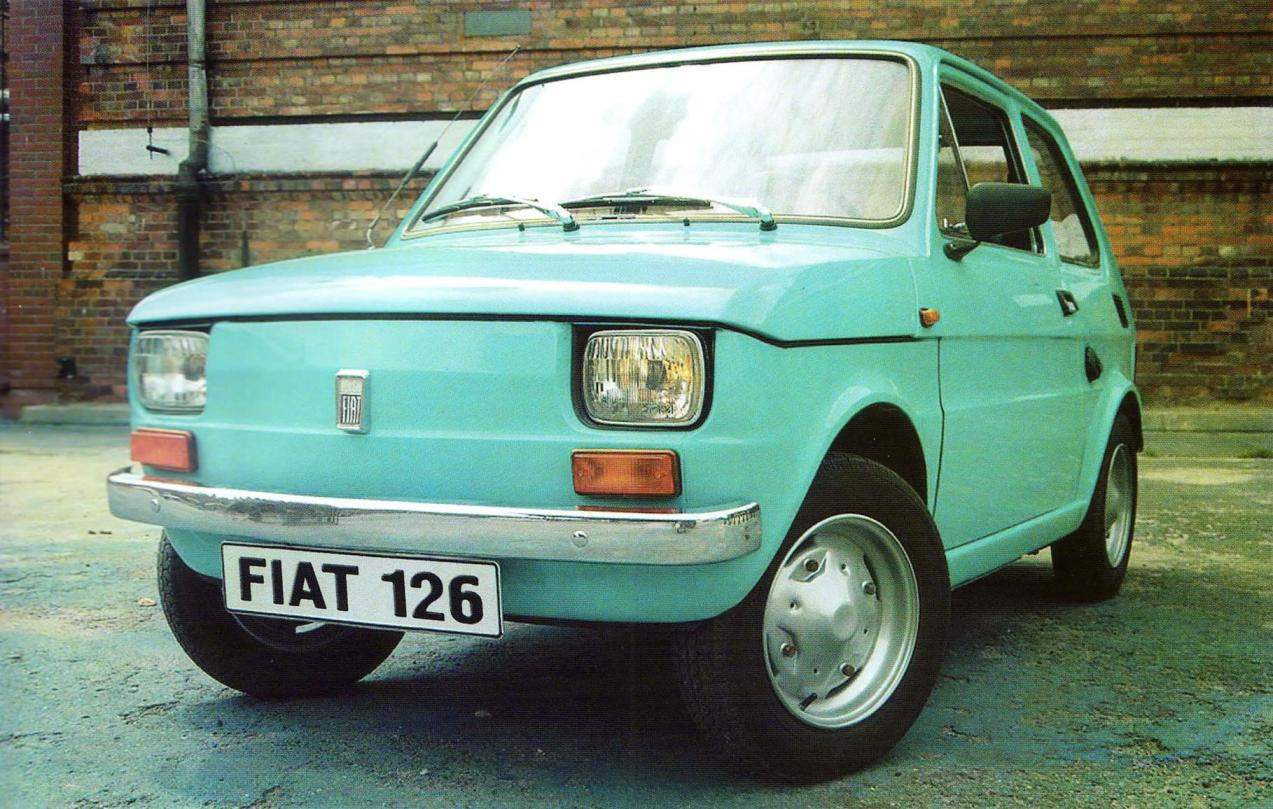 Compact car Polski FIAT 126 p. The present publication, we complete the story of the glorious cohort of Italian runabout, initiated by FIAT-500 Nuova, designed by the famous avtodizayner Dante Giacosa. Ideologically, the car became the successor of pre-war double minicar FIAT-500 Topolino, but structurally, it was a completely different car.

Nuova was put into production in the summer of 1957, and in the advertising campaign prior to sales, was declared as the further development of the beloved Italian Topolino.
On the technical level compact car stood out among the micro cars of the time. On it, in particular, has been quite successfully implemented in layout with a rear-mounted two cylinder motor is air cooled.
Nuova engine had a displacement 479 cm3 and 4000 rpm developed capacity of 13.5 HP At this car could accelerate to 85 km/h and consumed only 4.5 liters of gasoline per 100 kilometers.
The little car could carry two adults in the front seats and two children in the back seat.
The new “five-hundredth”, which received the nickname the Bambino (ital. — baby), was produced from 1957 to 1975, with its total production amounted to 3 893 294 of the car. The minicar was produced in a number of European States, including in the socialist countries — Czechoslovakia and Poland. 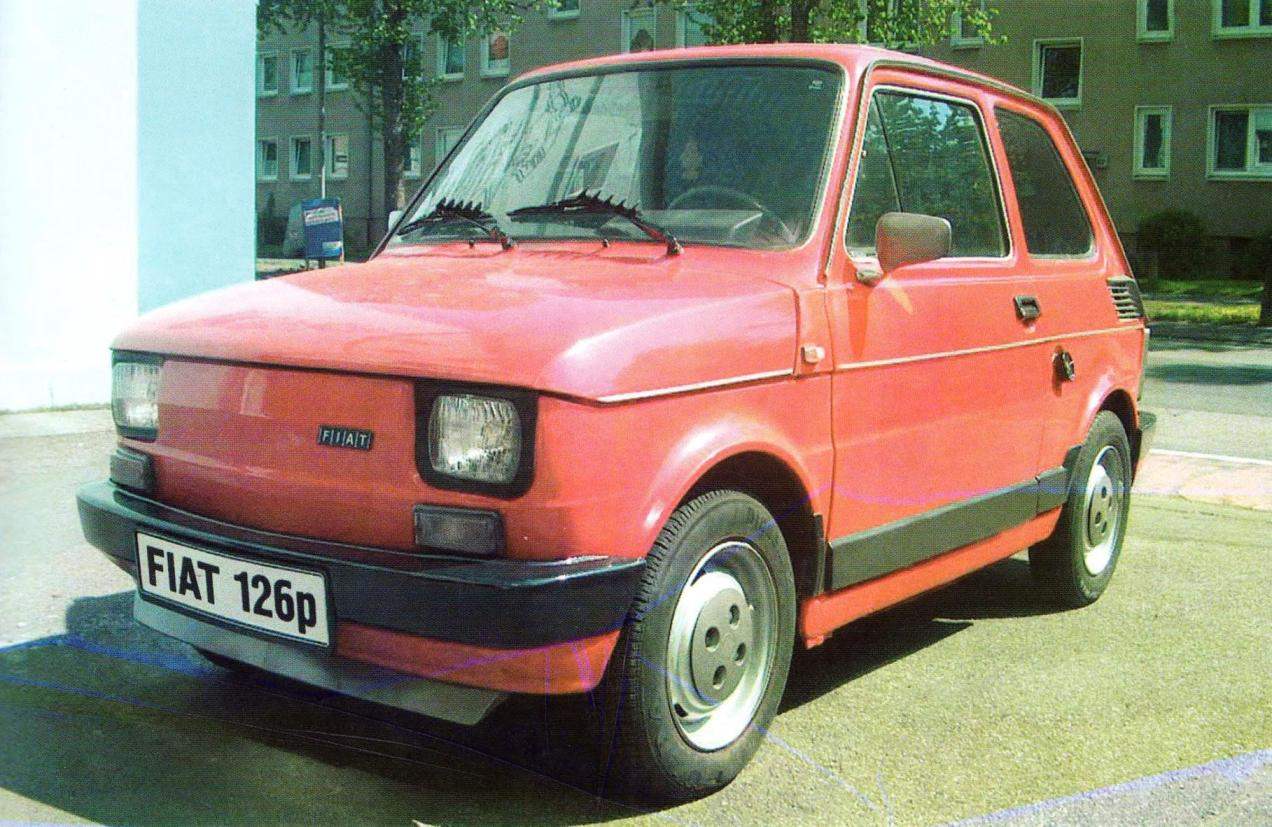 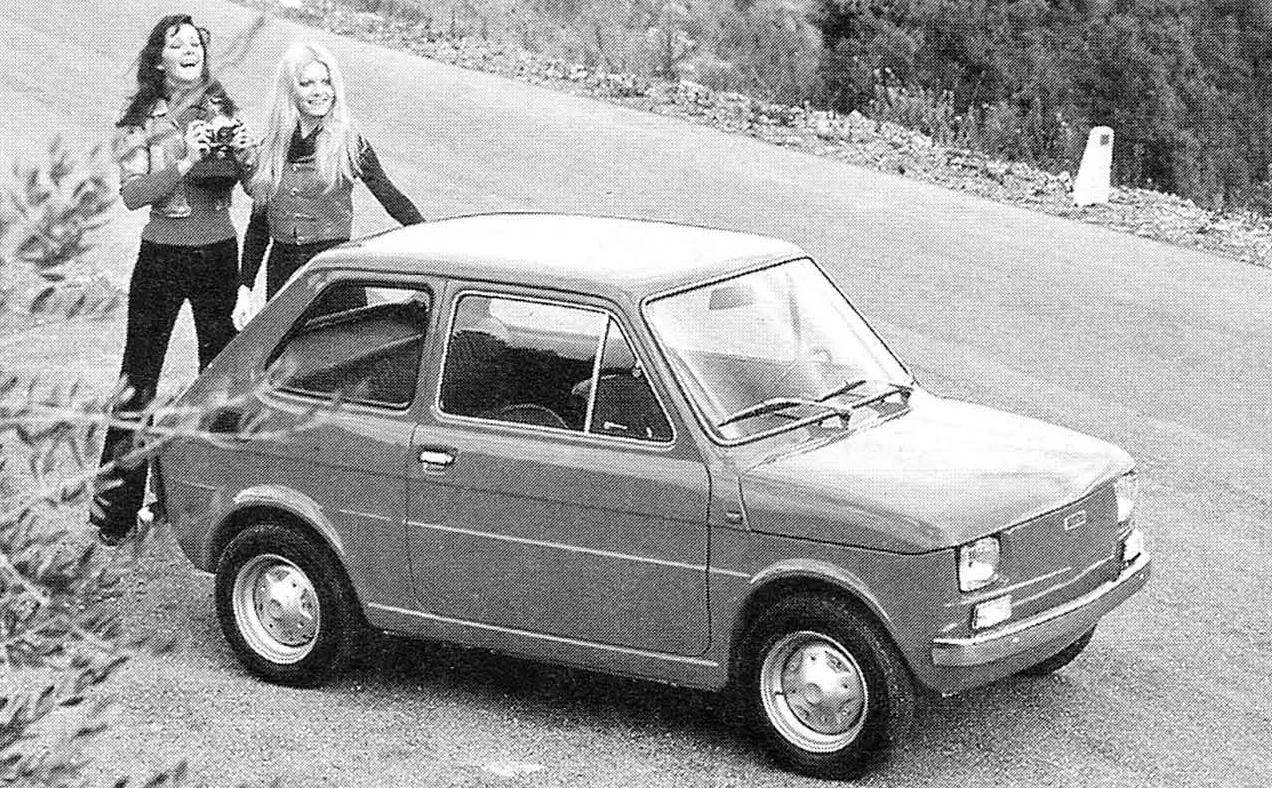 Polski Fiat 126 p, modification of 1984 (Poland)
In the process of production of the machine has been continuously improved. Already in the autumn of 1957 at the motor show in Turin was exhibited enhanced modification of the vehicle with an engine capacity of 15 HP, allowing to reach the speed of 90 km/h have changed Over time and the interior of the Bambino instead of sliding glass doors appeared more comfortable descending, was mounted sun visor for driver, the headlamp switch is conveniently placed on the steering column of the car. The sale also simplified, cheaper modification of the Bambino.
In Italy FIAT-500 Nuova has become a truly iconic car, and that he is grateful the producers have erected a monument, setting in front of the management of FIAT in Turin marble copy of the famous Bambino.
The car, however, continued to improve, and in 1972 he was subjected, in modern avtoradgona, a radical restyling.
The updated car received the name FIAT 126. In fact, it differed little from its predecessor — it was a miniature quadruple two-door rear-engined and rear-wheel drive passenger car. Has changed only the appearance of the machine in accordance with the upcoming auto fashion FIАТ-126 received the body in the form of a polyhedron with slightly rounded edges. By the way, the first Italian vehicle on which the firm broke in the body of similar form, became three-door FIАТ-127 issue 1971, something resembling the VAZ “eight”. 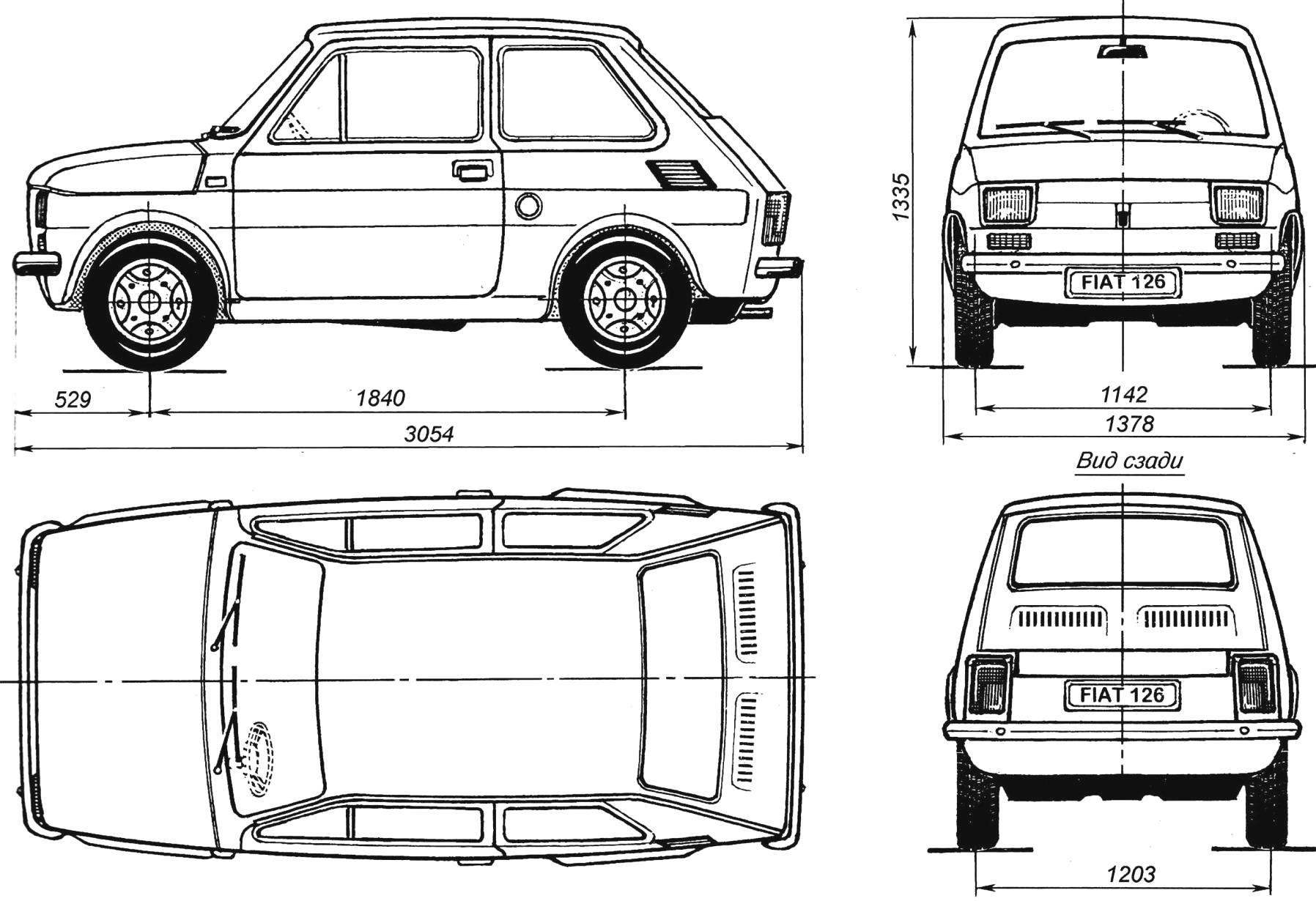 The geometric scheme of the car Polski FIAT 126 p
In fairness it should be noted that in a four 126-m rear sofa, intended for two children, with some difficulty could accommodate two adult passengers.
Rack FIАТ-126 was located in the front, and its volume was small, because inside it were the wheel arches. There also housed the spare wheel and battery.
The power steering gear of the car — type “worm wheel”. The front suspension was based on a transverse leaf spring, rear — trailing arms and coil springs, which are located inside a hydraulic damper.
The 126th can be outfitted with one of two engines — their working volume were, respectively, 0.6 l and 0.65 l at a power of 23 HP and a torque of 39 and 43 N* m. however, several different maximum speed of cars with such engines: the first it was 110 km/h and the second to 115 km/h.
Machine in those days was very economical — the fuel consumption was 6 litres per 100 km. However, the throttle response left much to be desired from 0.6-liter engine the car reached a speed of 100 km/h already after 60 seconds.
Transmission FIАТ-126 needed special treatment, since the first gear synchromesh had to include her on the move was required so-called “blipping”.
Since 1973 minicar began to produce under license in Poland. The first car was assembled from Italian components 6 June, and a month and a half of the car began to completely be produced in Polish factories. 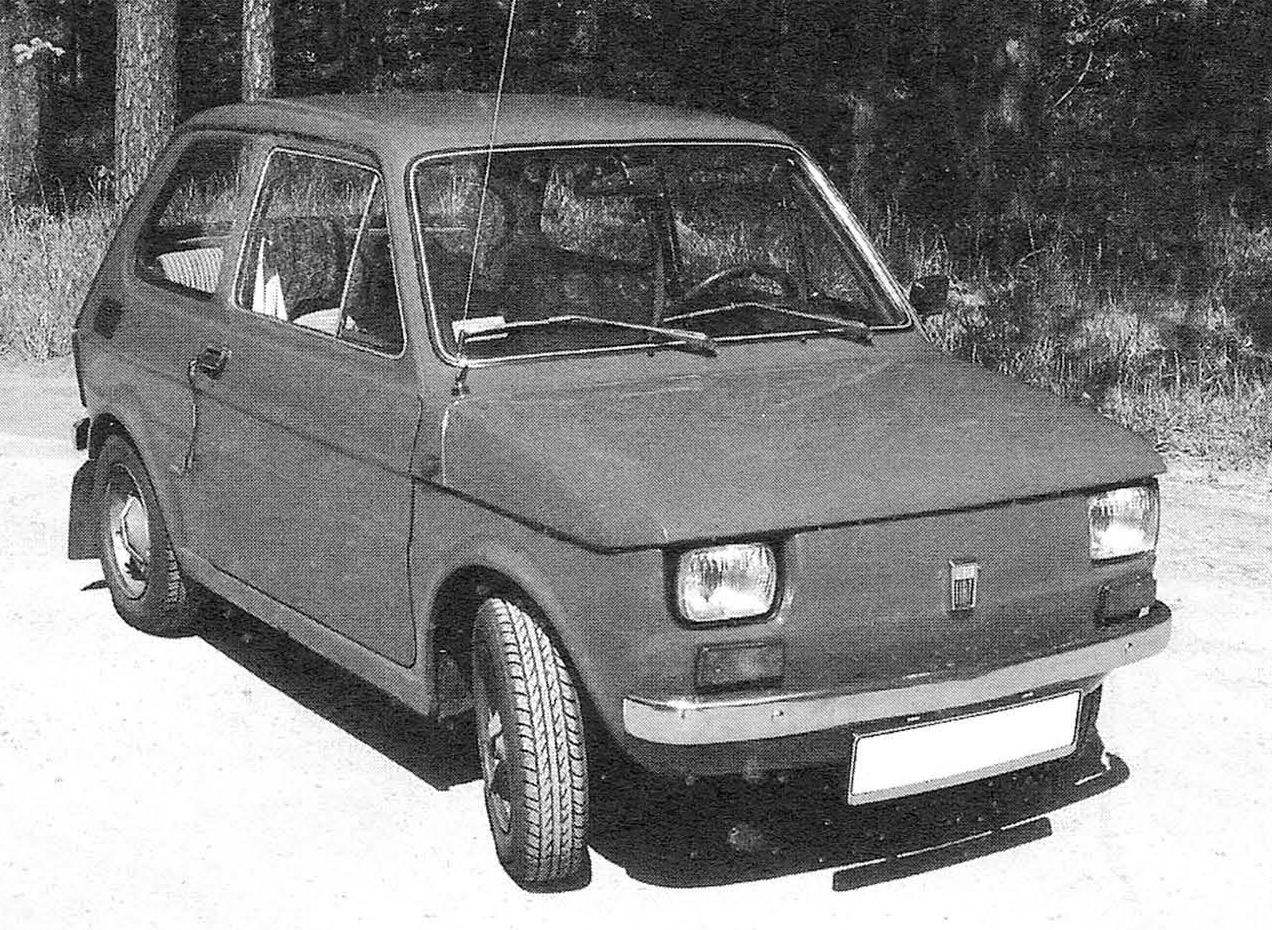 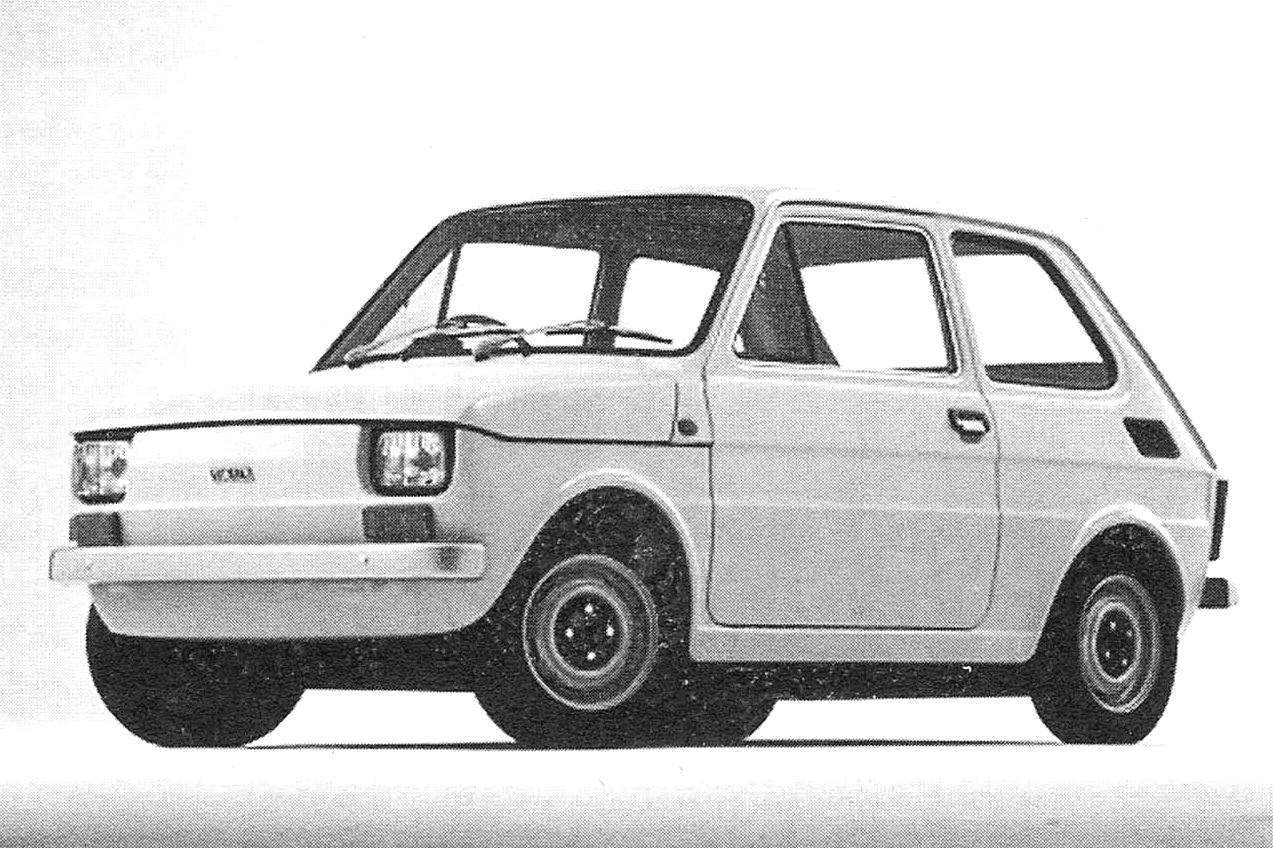 Compact sedan Polski FIAT 126 p
I must say that cars produced in Poland in pre-war years. In particular, from the Italian of components collected FIAT-500 Topolino. And after the Second world war, in 1950-e years, there is going to FIAT-Nuova 500 (Bambino) and also has mastered production of inexpensive cars of their own design. So, from 1957 to 1983, the factories of the country was carried out serial production of the car Syrena with a two-stroke three-cylinder engine from the German car Wartburg.
In 1951, the country began to produce for the Soviet license car GAZ M20 “Victory” under the name Warszawa. In 1975 in Poland based on German sidecar Goggomobil was to create a compact little micro-car Meduza (Mikrus), a design which was widely used motorcycle units, including a 14.5-horsepower two-stroke two-cylinder engine working volume of 0.3 l, which clocked 500-kg car up to 85 km/h.
However, back to the events that led to mass production in the country cheap compact Polski FIAT 126 p.
In the early 1970-ies the party and state leadership of the Polish people’s Republic approved the program of production people’s car. To this end, in 1971 FIAT signed a contract for the production under license of the FIAT-126. Because only in that time in Poland large FSО factory (Fabrika Samochodow Osobowich) has already been downloaded by more solid release licensed Italian FIАТ-125 (car, almost no different from FIАТ-124 prototype Soviet car VAZ-2101 “Zhiguli”), it was decided to manufacture the people’s car to build in Bielsko-Biala plant called FSМ (Fabrika Samochodow Malolitrazowych), designed to produce 200 thousand cars a year.
The compact car, dubbed FIАТ Polski 126 p, was launched in 1973. By this time in the well-fed Western Europe, sales of low-power cramped cars fell substantially, well, in socialist countries, not spoiled by indiscriminate motorization, compact, economical and inexpensive cars are lined up a lot of turns. So in 1976 production FIАТ-126, a grandnephew of the great Тороlinо, was fully transferred to Poland. It is interesting that in the future this state has become one of the world leaders in the production of compact cars. There are several reasons: historical traditions, low level of incomes, problems with Parking on the Central streets of big cities and, in the end, expensive fuel.
Despite more than modest dimensions (length 3,054 m, width 1,378 m), at 126 th was quite roomy body, designed to carry four people. Маluch (with the Polish boy, a nickname he received Роlski FIАТ 126 R) became a really popular car. In recent years, the production cost was only $ 2,500. For many Маluch became the first machine, and in some families it was purchased as a second car. 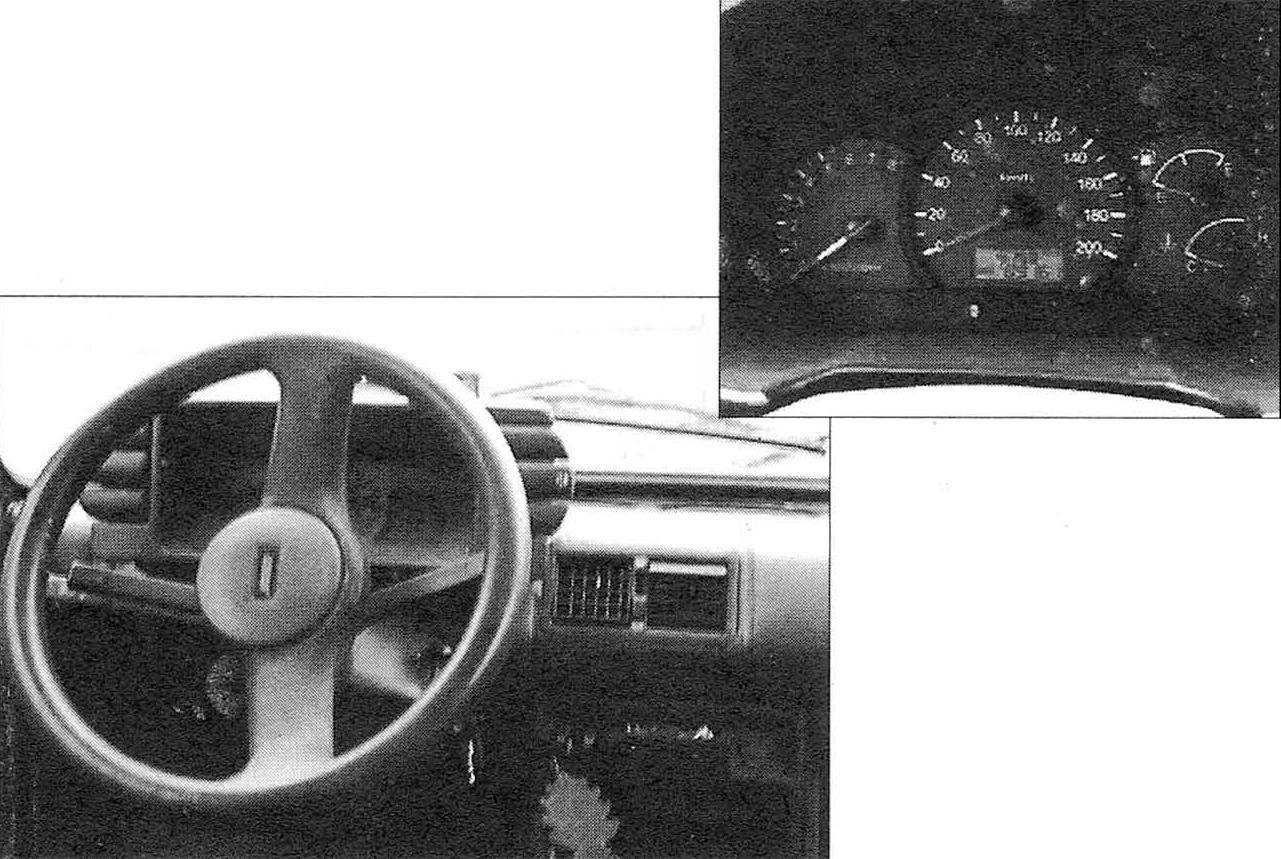 The front panel of the car Роlsкі FІАТ R. 126 at the Top of the instrument cluster (speedometer, tachometer, oil temperature and fuel gauge)
By linking FIAT-126 (below) did not differ from its predecessor FIAT 500 Nuova (top)
FIАТ Polski 126 p released until September 2000, just with Polish, rolled off the 3.32 million of these machines. Over the years, the production model has been repeatedly upgraded. Since 1977, produced a version with a more powerful engine capacity 652 cm3 (24 HP). In 1984 the car was equipped with plastic bumpers and a new dashboard. In 1987, at 126 FIАТ R appeared in the back door, which made two-door coupe in three-door hatchback. On sale there is machine with 0.7-liter 26 HP engine, liquid cooling. And since 1997, in accordance with the norms of Euro-2, FIАТ 126 R was produced with a fuel-injected engine and catalytic Converter.
In addition to Italy and Poland, the 126th was produced in Yugoslavia (Serbia) under the name Zastava 126.
Production FIАТ 126 R was discontinued in October 2000. Total production of the model was 4 670 000 units.
Today Poland has become a leader in the production of mini-cars in Europe. Now here begins the production of cars FIАТ 500 is a new-generation Ford Ka, created on the same platform.