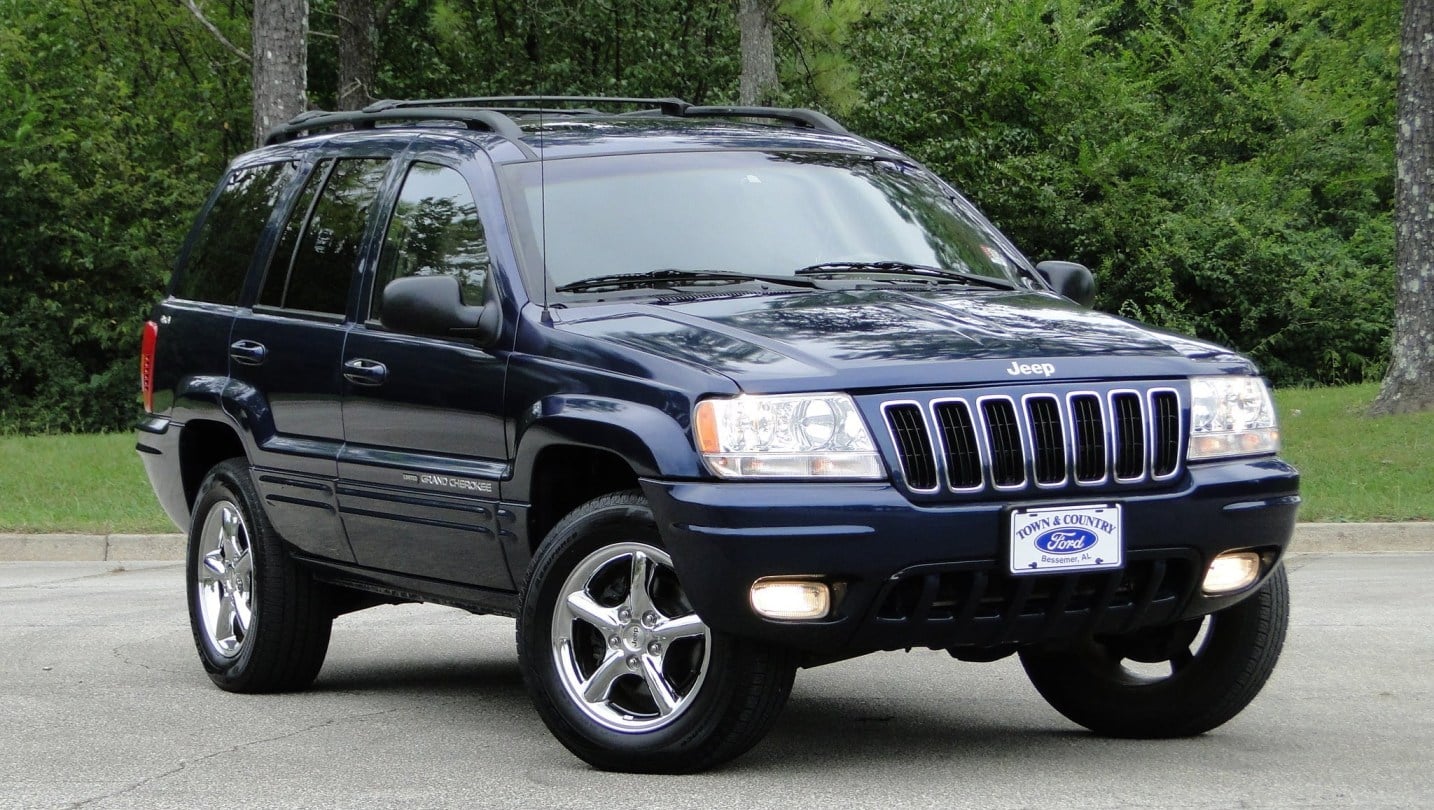 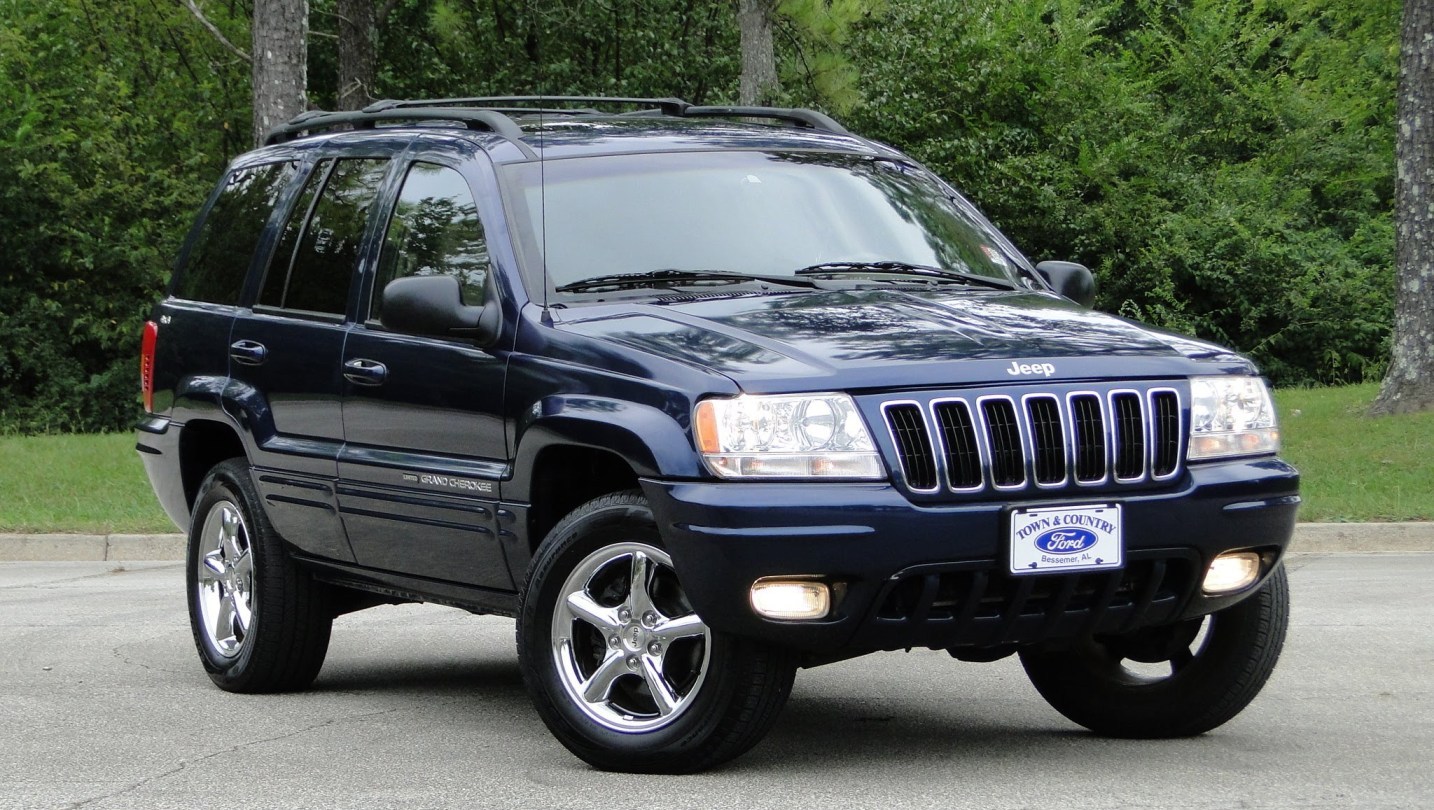 The term jeep (jeep) appeared in the automotive world during the Second world war, when the American army began to arrive, light multipurpose vehicles developed by Willys — WILLYS MB, FORD GPW and FORD CP, which in military terminology is called “vehicle capacity quarter ton”. The sound of the letters “Dzhi-PI” quickly turned into the mouth of the drivers and mechanics in a concise and succinct term for jeep, which became the umbrella term utility AWD compact SUVs. After the war, so began to call their car firm Willys, which produced numerous variants have become so popular during the war years, a light jeep — like army and “civilian”. As a trademark, the term Jeep was registered with the firm on 30 June 1950.

The history of the company of John North Willis, a former car dealer, was launched with the acquisition in 1908 on the verge of bankruptcy small Overland automobile company, which became known as Willys-Overland. The company has rapidly become one of the leading automobile companies of America in 1913, she produced about 35 thousand cars!
In 1920, the company signed a cooperation agreement with the British company Crossley — United Corporation was renamed while Willys-Overland-Crossley, however, in 1929 D. Willis gave up his stake, and the firm was soon declared bankrupt. Well, the indefatigable D. Willis founded a new automotive venture, calling it simple and austere — Willys. The first-born of the revived company became the car WILLYS-77, produced until 1942.
In 1940, the firm Willys army received an order to develop the famous “vehicle capacity quarter ton”. In no time the car was designed and built, and already in 1941 the SUV began to mass-produce in factories jeep (called the WILLYS MB) and Ford plants (called the FORD GP and FORD GPW). All the years of the war were fired 349 361 of these machines. A lot of them came in this time and in our country under lend-lease deliveries. 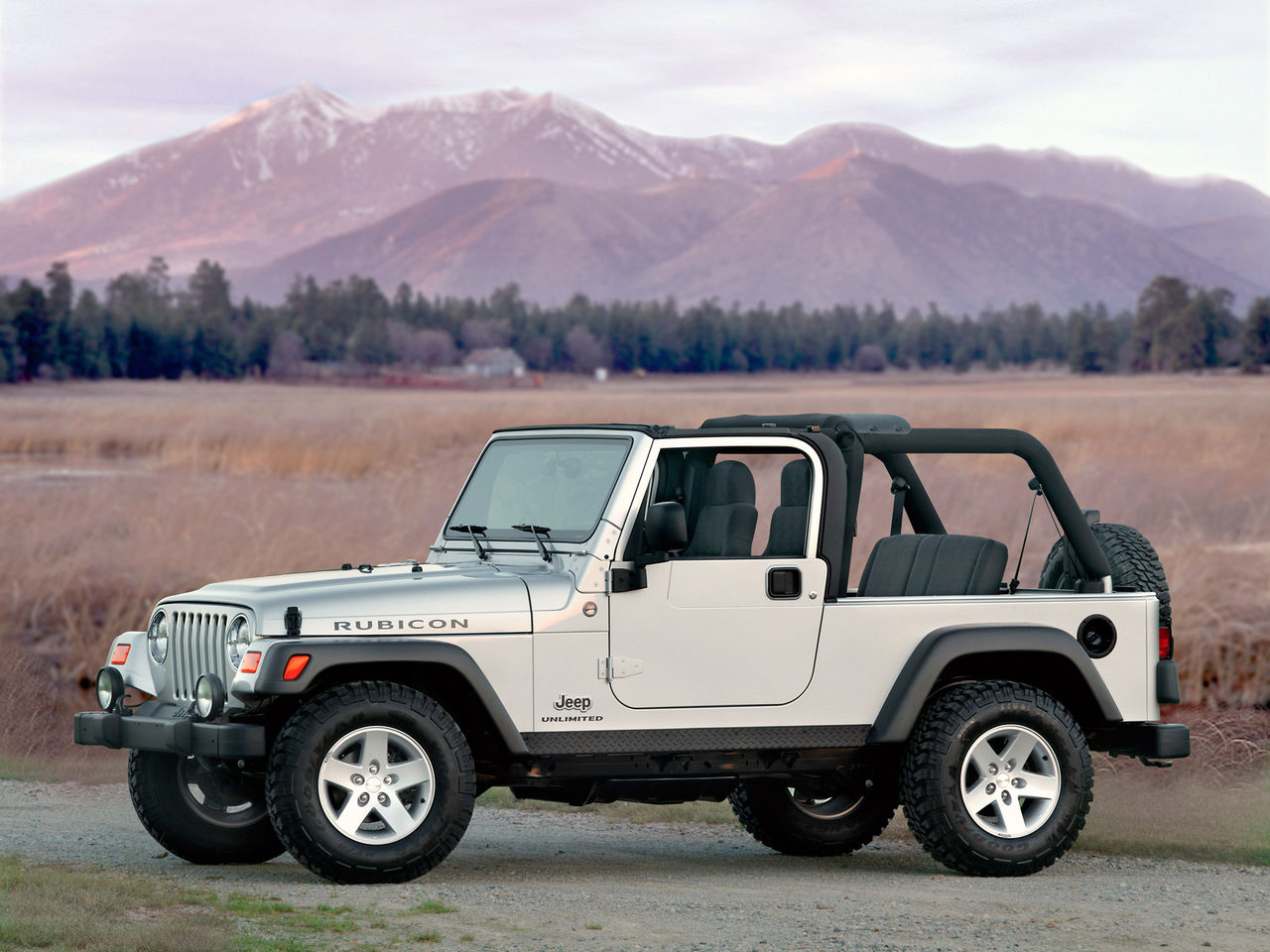 The popular SUV JEEP WRANGLER
After the war, the most popular car company became all-wheel drive Willys JEEPSTER produced from 1948. He became the prototype of the modern universal “civilian” SUVs. It was a machine with four – or six-cylinder engine, which was produced with open or closed utility body created by avtodizayner Brooke Stevens.
Between 1953 and 1969, the Willys company went through a number of transformations associated with a change of owner: first it was bought by the firm Kaizer-Frazer, then the branch on manufacture of the jeep stood out from this company, becoming the company Kaizer-Jeep. The last in 1970 became part of the U.S. car manufacturer American Motors, and continued with success the production of cars under the brand name Jeep. The most popular cars of concern in the 70-ies were simplified type SUV WRANGLER and the family more comfortable vehicles WAGONEER and CHEROKEE.
In 1987, American Motors went bankrupt, and the production base of this company passed to Chrysler group, who organized the Jeep-Eagle. In 1998, Chrysler became part of DaimlerChrysler.
In the modern program of this concern, there are three families of four-wheel drive SUVs: refined modifications army WILLYS MB, produced under the brand name WRANGLER, more “civilized” CHEROKEE mid-size cars and, finally, increased comfort jeep GRAND CHEROKEE with a powerful engine displacement of 2500 to 5900 cm3.
We sometimes criticize the Russian auto industry, which for decades produces the same annoying all ad nauseam modification, although the same tactics can sometimes adhere to and leading U.S. automotive companies. In particular, the well-known JEEP CHEROKEE comes up from 1984 — record on duration of serial production of the car model in the Western world! Of course, in this case the immutability of machine design for seventeen years, primarily indicates that its small-scale mining operations — do not subtract not add. 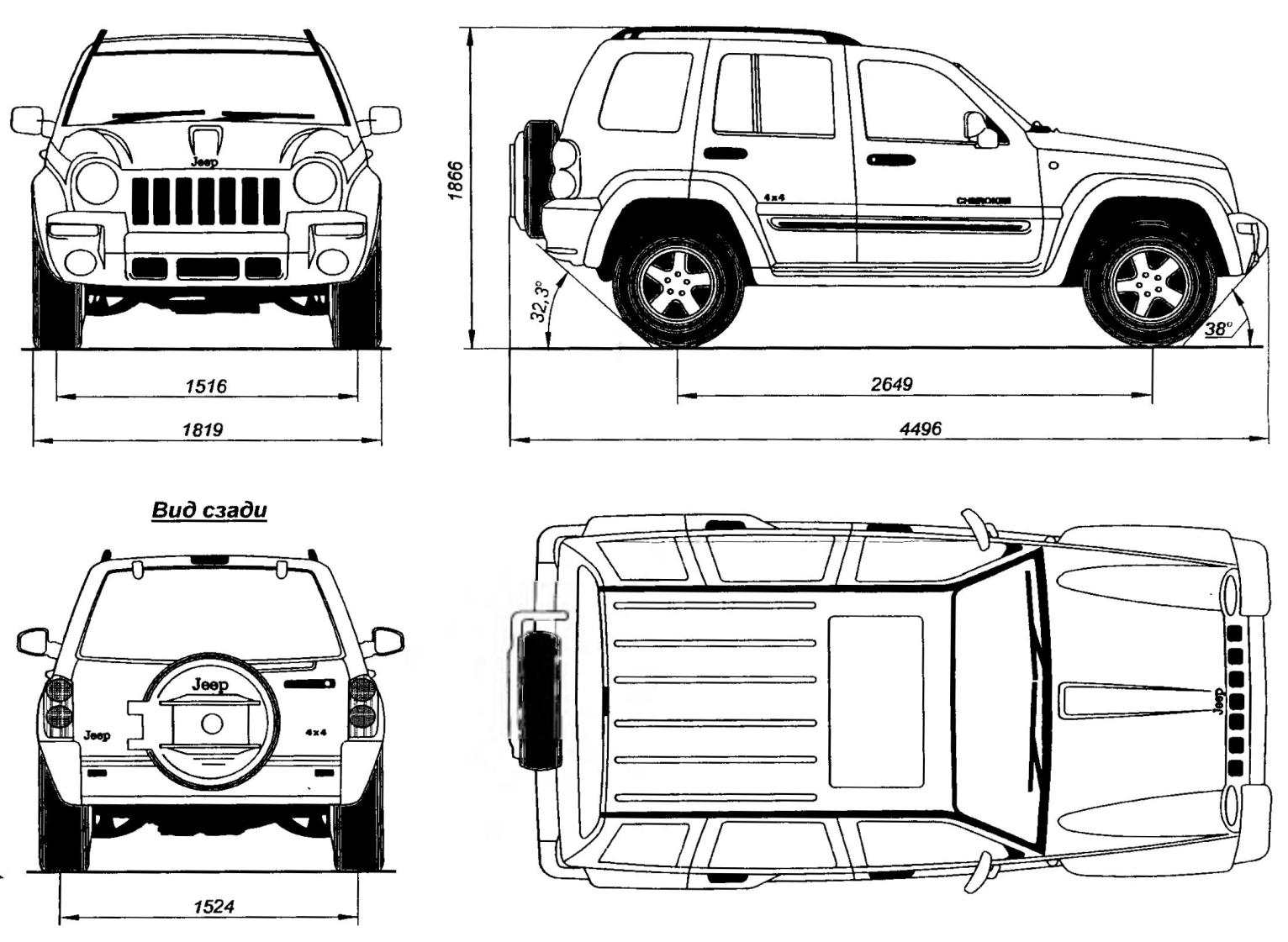 Universal four-wheel drive utility vehicle JEEP CHEROKEE of 2001
The new CHEROKEE is possible to call a reduced modification of the senior in rank of the jeep GRAND CHEROKEE. He has the same solid axle beam in the rear suspension, the same elements of transmission permanent all-wheel drive Select Trac, which is equipped with expensive modifications GRAND CHEROKEE. Even the engine of a new car represents truncated to six cylinders V-shaped “eight” from the GRAND CHEROKEE: the working volume of this motor is 3700 cm3, power — 211 HP As in the prototype, the new engine with a relatively low degree of force a cast iron block and two valves per cylinder. To reduce vibration, in the middle of the block with 90-degree Vee of the block built balancer shaft to increase the torque at low revs in the power plant used customized plastic intake manifold. Yes, and going to “six” in the same factory Mack Avenue in Detroit, and 4.7-liter “eight”.
Part of the new CHEROKEE is equipped with four-cylinder turbodiesel engine from Italian company VM Motori with direct injection (common rail) power of 143 HP with the working volume 2500 cm3. Cars with this engine are equipped with only a manual transmission and a simplified transfer case Command-Trac no center differential.
In the program firms also issue more simple CHEROKEE with four-cylinder petrol engine capacity of 150 HP, working volume of 2400 cm3.
On cars with four-cylinder engines four-wheel drive modes of the transmission are switched with a single lever on floor tunnel. Among them is the mode actuator on the rear wheels only (2WD), which is used when riding on the pavement; limited time-hard mode all-wheel drive, effective at driving off road (4WD Part-time) and mode reduction gear for particularly difficult areas (4WD Low). On the same car with a V-shaped “six” is a multi-mode transfer case Selec-Trac that has everything and mode 4WD Full-time with free centre differential, allowing to use all-wheel drive and when driving on asphalt. 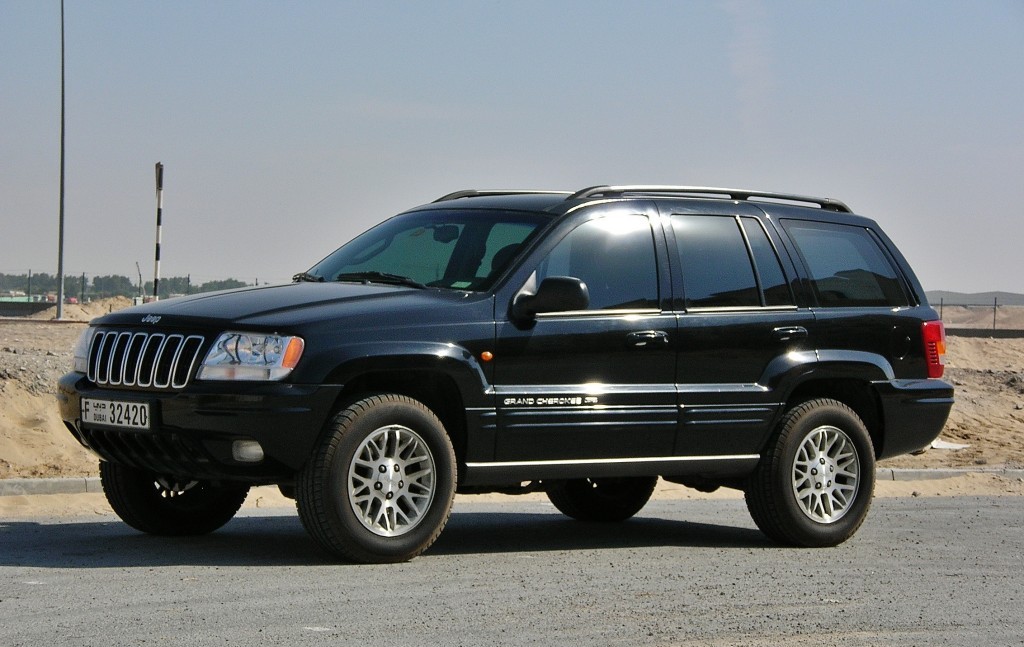 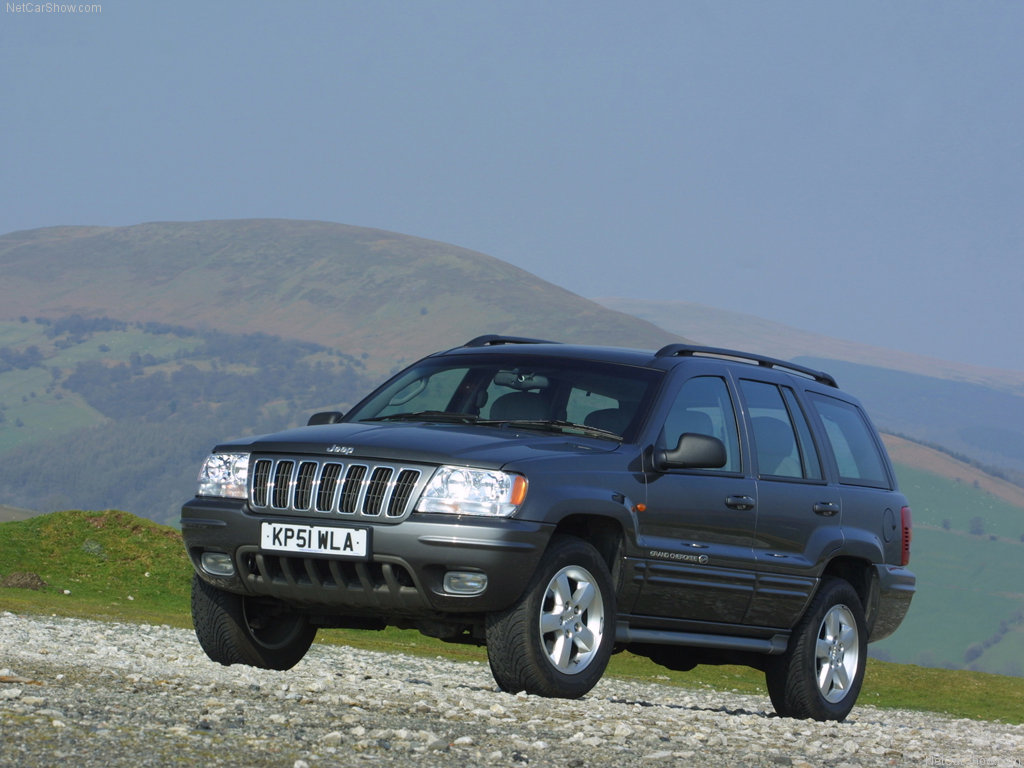 The body shell of the new CHEROKEE. According to its creators, the strength and rigidity of such a body comparable to the frame structure 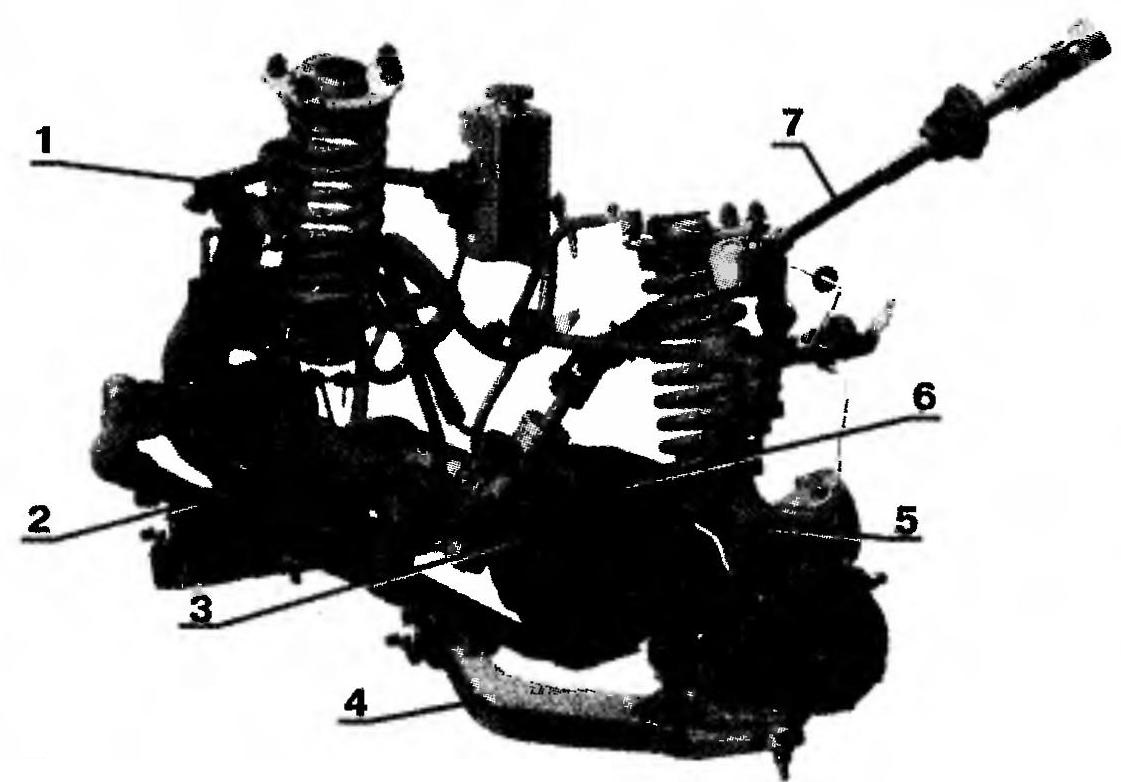 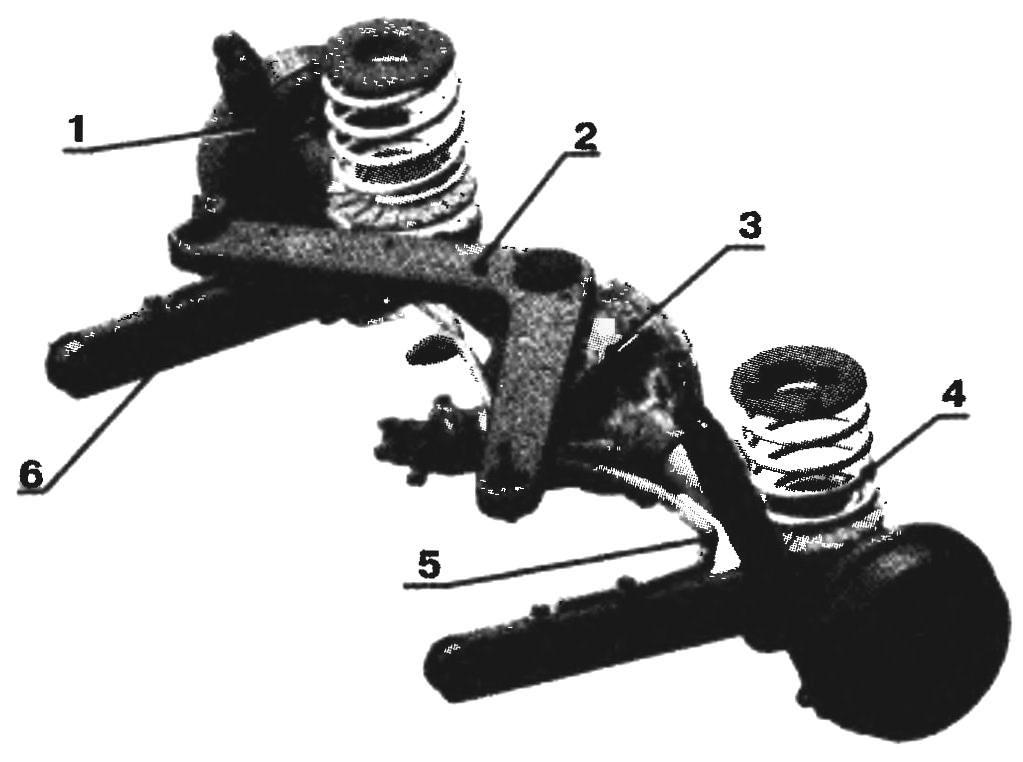 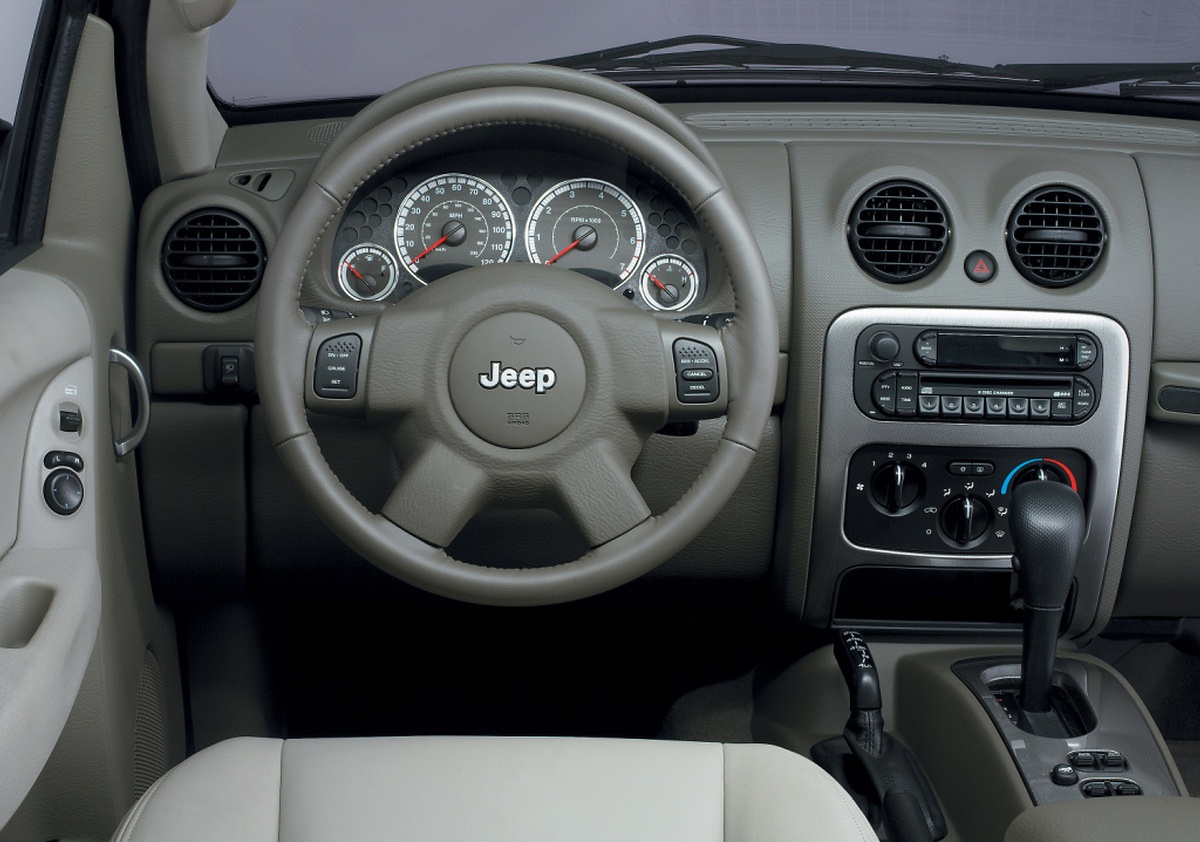 The interior of the driver’s seat
The body of the new CHEROKEE carries, but the makers of the car claim that the powerful members embedded in the bottom of the body scheme in a frame body, give the body rigidity and strength inherent in the frame designs. In addition, body strength greatly increases and the rational choice of materials — more than 2/3 of the floor panels, as well as numerous amplifiers stamped from high strength special steel. The torsional stiffness of the new cars and a half times more than the GRAND CHEROKEE, and on the strength of the car has exceeded all vehicles with the brand Jeep. However, if a record stiffness values compare with the corresponding parameters of other cars, it appears that the same torsional stiffness has a new body domestic “Niva” VAZ-2123.
The most radical change in the new CHEROKEE, in comparison with predecessors, has undergone suspension. Instead of the archaic leaf springs in the rear dependent suspension bridge appeared springs with progressive characteristic and two stamped control arm, and to exclude the transverse displacements of the bridge is not used the classic lever Panhard, and a V-shaped lever, which holds the beam at its center for Carter, the main transmission by means of a ball joint — the same mechanism used on the SUV of LAND ROVER. Shock absorber — twin-tube, gas-filled. Was different and the front suspension — now this is a classic box-spring double wishbone suspension on the powerful arm — lower cast from ductile iron, top steel, forged.
At the end of the story about the chassis of the new SUV should also mention the braking system of the vehicle. Thus, the front wheels are equipped with ventilated disc brakes with discs with a diameter of 288 mm and single-piston calipers and the rear brakes of drum type drum diameter 254 mm. of course, on all versions of the jeep has a modern three-channel anti-lock braking system ABS with electronic regulator of the balance of forces on the axes of the EBD. 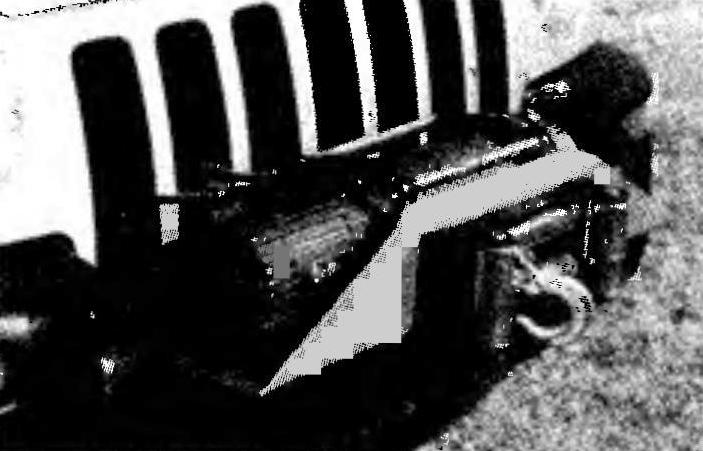 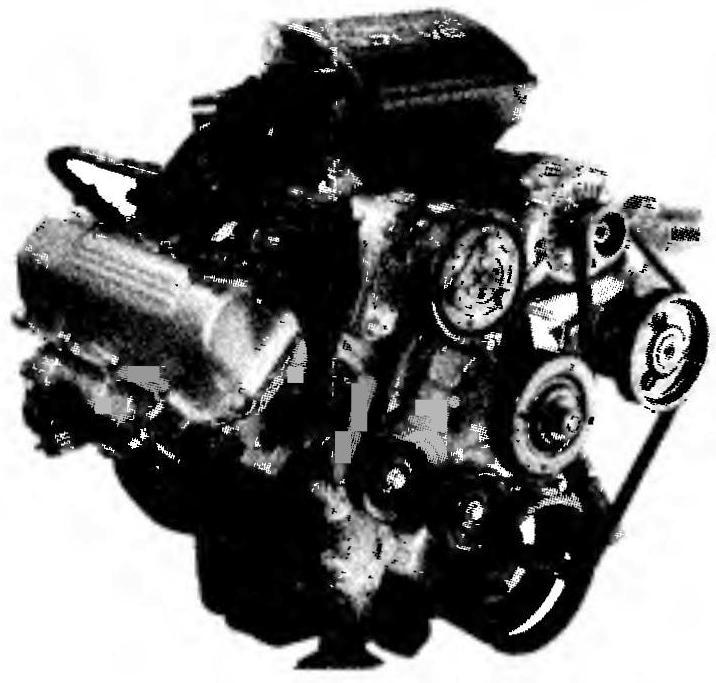 Six-cylinder V-shaped engine of the new jeep with a power of 211 HP is a smaller two cylinder “eight” from the GRAND CHEROKEE
Test point consistent braking power of the jeep with the maximum speed mode: slow is fast and smooth, without common to most jeeps wobbling, requiring the driver quick and accurate action of the wheel. This behavior is determined by the CHEROKEE agreed performance of the new suspension and steering. The latter, incidentally, for the first time on JEEP rack and pinion made with gear ratio as in passenger cars, so the steering wheel turns CHEROKEE reacts extremely quickly and as accurately as possible.
It should be noted that the JEEP CHEROKEE 2001 year — not “asphalt SUV”, which in recent years has bred more than enough. It is a complete multifunctional SUV that was equally well behaved as on a freeway, the maximum speed of the machine, equipped with a V-shaped six-cylinder engine producing 211 HP is 180 km/h(!), and offroad and it has good traction on the reducing gear. The car has a hard drive and a viscous coupling in the rear differential, good geometrical parameters on the cross: 203 mm ground clearance, small overhangs and a long stroke suspension. And all these qualities are perfectly implemented with high smoothness on any road.
Technical characteristics of JEEP CHEROKEE vnedorozhnik

The appearance of the new CHEROKEE is consistent with the corporate identity of the family JEEP, as defined in far forties of the last century yet the firm of John North Willis when designing the army “vehicle capacity quarter ton”. Even seven vertical slots in the grille of the JEEP unchanged for fifty years! In the new CHEROKEE with new-found SUV round headlights family resemblance can be seen absolutely clearly.
Something vaguely similar and the interiors of the first and last jeep. Maybe the individual elements of the cabin or in the round, well-read the instrument dials, the outlines of which are repeated in an unobtrusive round the interior — visor in the dashboard, on the steering wheel and punch holes of the ventilation system.
New jeep only starts his journey through the highways and roads of our planet. Apparently, soon he will get to Russia. Do not expect that this machine will be a strong competition to our “Fields” and UAZ — depending on the set price of “American” will be from 25 to 35 thousand dollars. However, for “new” and even “not-so-new Russian” it is unlikely that this price may seem excessive.
I. EVSTRATOV