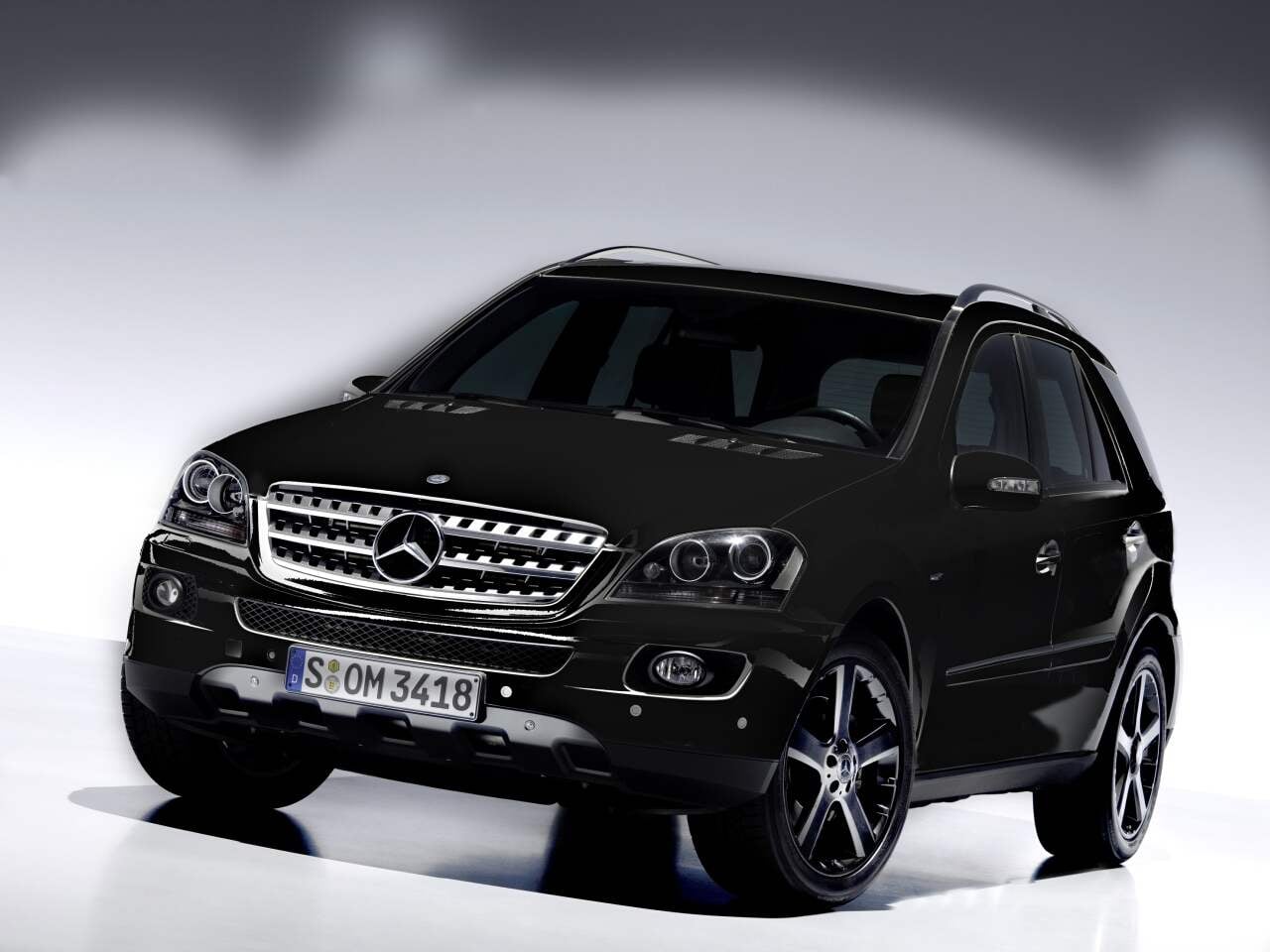 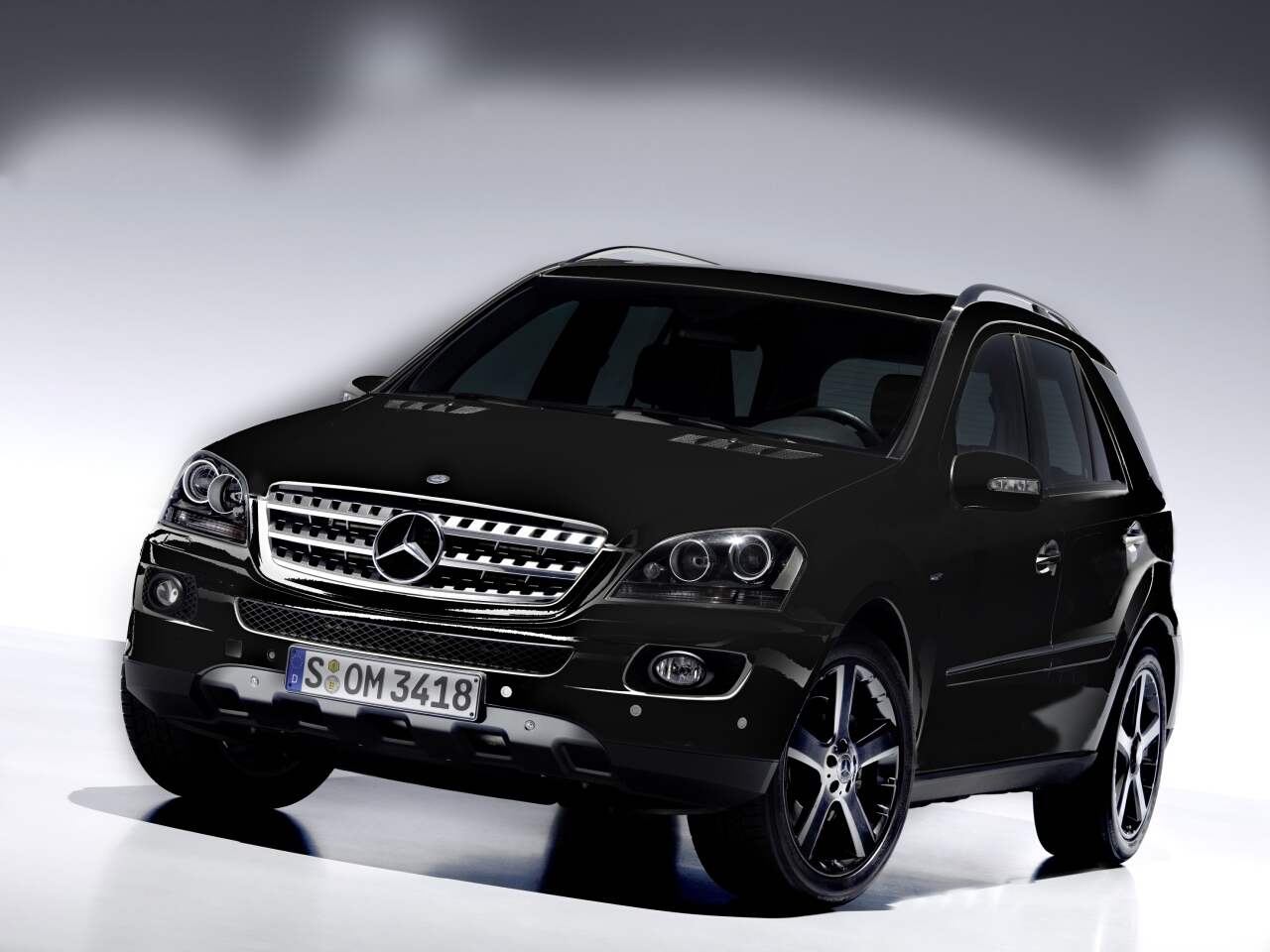 All-wheel drive MERCEDES-Benz ML-class. We have somehow got used to whizzing through the streets of the city to the jeep, which, in fact, are not vehicles, but only cars-“overgrown”. Motorists derisively call them “SUV”, alluding to conditionally increased permeability of these machines — except on smooth asphalt. Their appearance is due to the fact that the car was quite difficult to combine in one vehicle function of the vehicle-an SUV and a comfortable limousine — they have totally different suspensions, transmissions, engines, steering… However, lately began to appear and all-wheel drive machine with a universal transmission and variable ground clearance, easily coping with off road terrain and at the same time, with increased comfort and a pronounced sporty character.

In the production program of Mercedes’s first SUV appeared in 1979 — the Shah of Iran, Mohammed Reza Pahlavi, who was a major shareholder in Mercedes-Benz, with the rearmament of the army placed an order for a new four-wheel drive car-the Rover is on this firm. In an contracted time machine was created, however, the coup in Iran became the reason of cancellation of the order best.
The civilian version of unclaimed Iranian army jeep called the GELANDEWAGEN (German — autodescent) was launched in the series and soon became very popular — buyers were attracted by his simplicity, good flotation and high reliability. GELANDEWAGEN is constantly improving and, to the surprise of experts, it soon evolved from a utilitarian “goat” in the luxury SUV of the highest class.
However, the archaic character of the former army car scared off a solid group of potential buyers, mostly Americans, who in the late 1990-ies began to show clear interest in a modern and comfortable SUVs. To satisfy such a demand was made possible with start-up in the American city of Tuscaloosa (Alabama) a new plant of Mercedes-Benz it was there, it was decided to start production of a fundamentally new jeep, nothing resembling a GELANDEWAGEN sample 1979.
SUV concept, which became the predecessor of the cars of the new class, was first presented to the public at the International exhibition in Detroit in 1996. The car became a real sensation of the exhibition, and after a year it was run in a series called the MERCEDES-BENZ ML. The car turned out dynamic, high-speed, but its characteristics were comparable with numerous jeeps”SUV”. 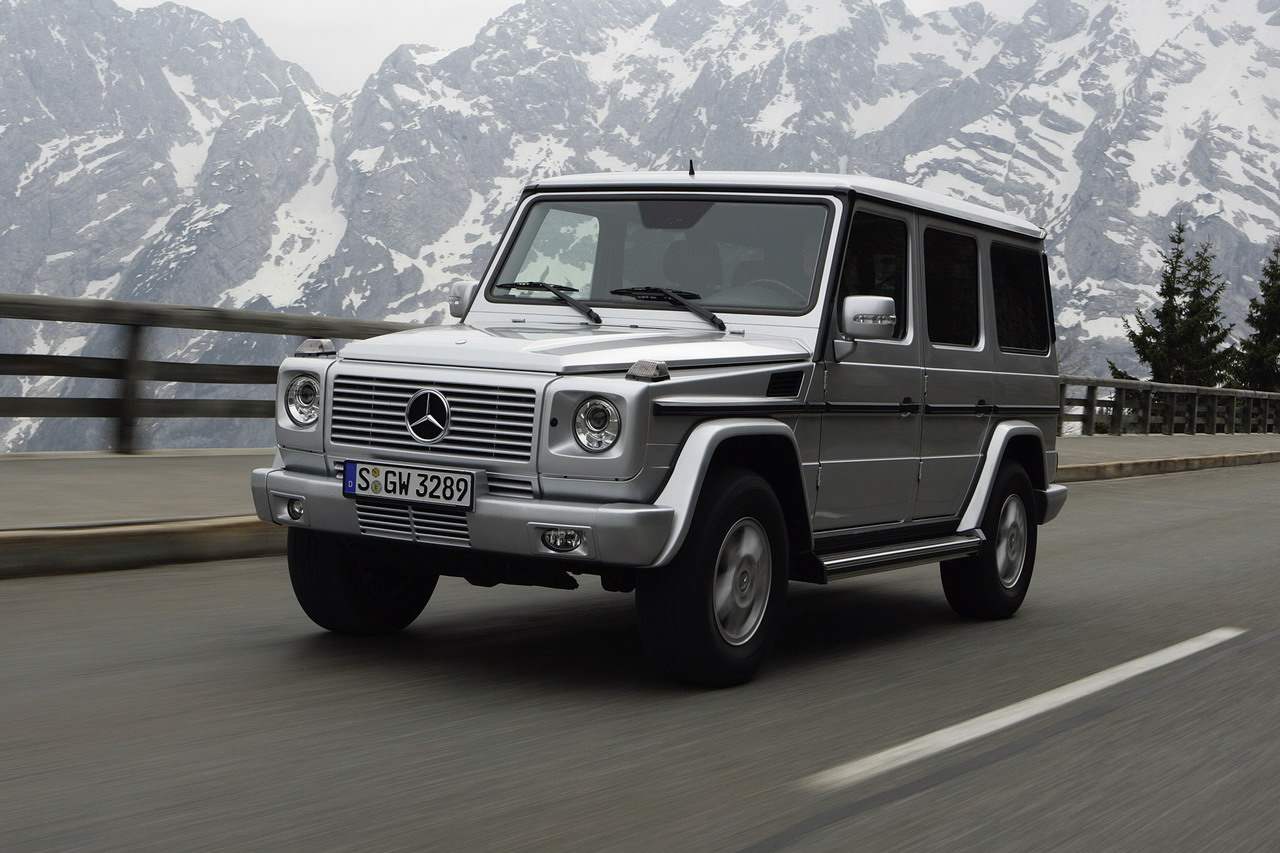 MERCEDES-BENZ GELANDEWAGEN is a comfortable SUV, leading its origin from the army jeep of the sample in 1979
The first cars ML-class was produced in the summer of 2001. The firm has updated the look of the car by changing the front bumper, which is made as a composite of two parts. The car was fitted with the new lighting, new rear view mirrors with repeaters “turn signals”. Has been updated and the interior of the cabin, and as standard in addition to front and side airbag appeared side inflatable curtains security larger size.
The car was produced in five basic versions. Two of them were new — ML500 with 5-liter 292-horsepower V8 engine, develops a speed up to 222 km/h and accelerates to 100 km/h in 7.7 s, and ML400 CDI with a new 4-liter turbo engine direct injection 250 HP, develops speed to 213 km/h and accelerates to 100 km/h in 8.1 seconds, the Volume of cargo space in all five versions were 0.16 m3, when folding the third-row seats — 0,63 m3. I liked the car buyers, despite the relatively high price, its production in seven years amounted to 620 thousand copies. 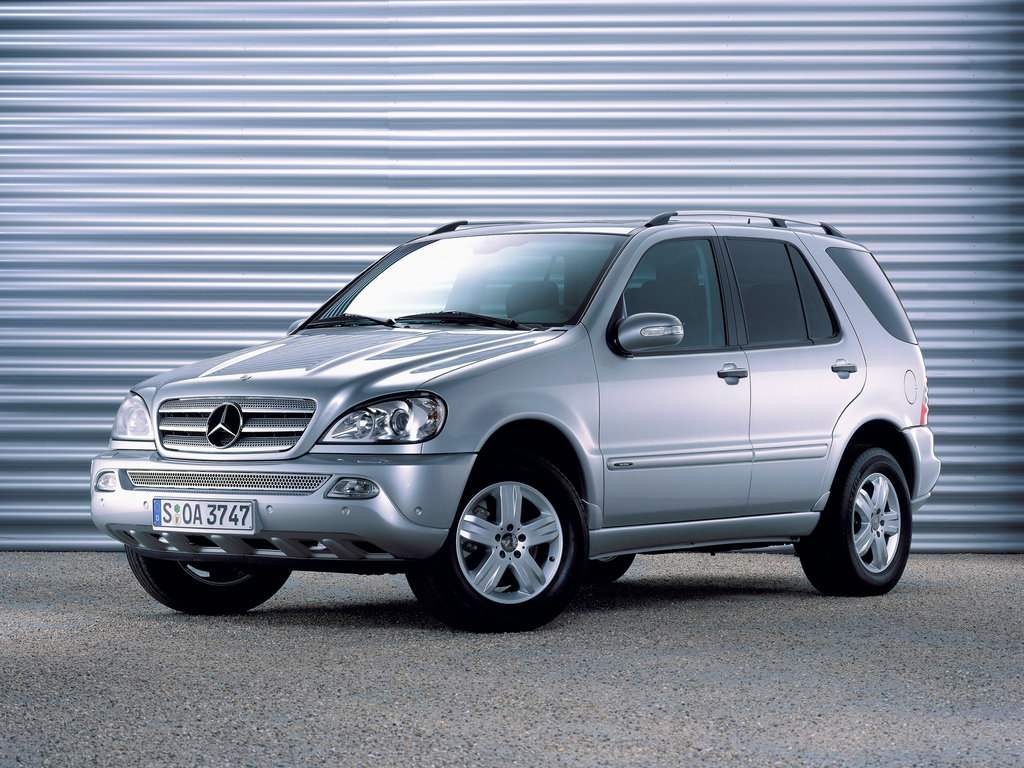 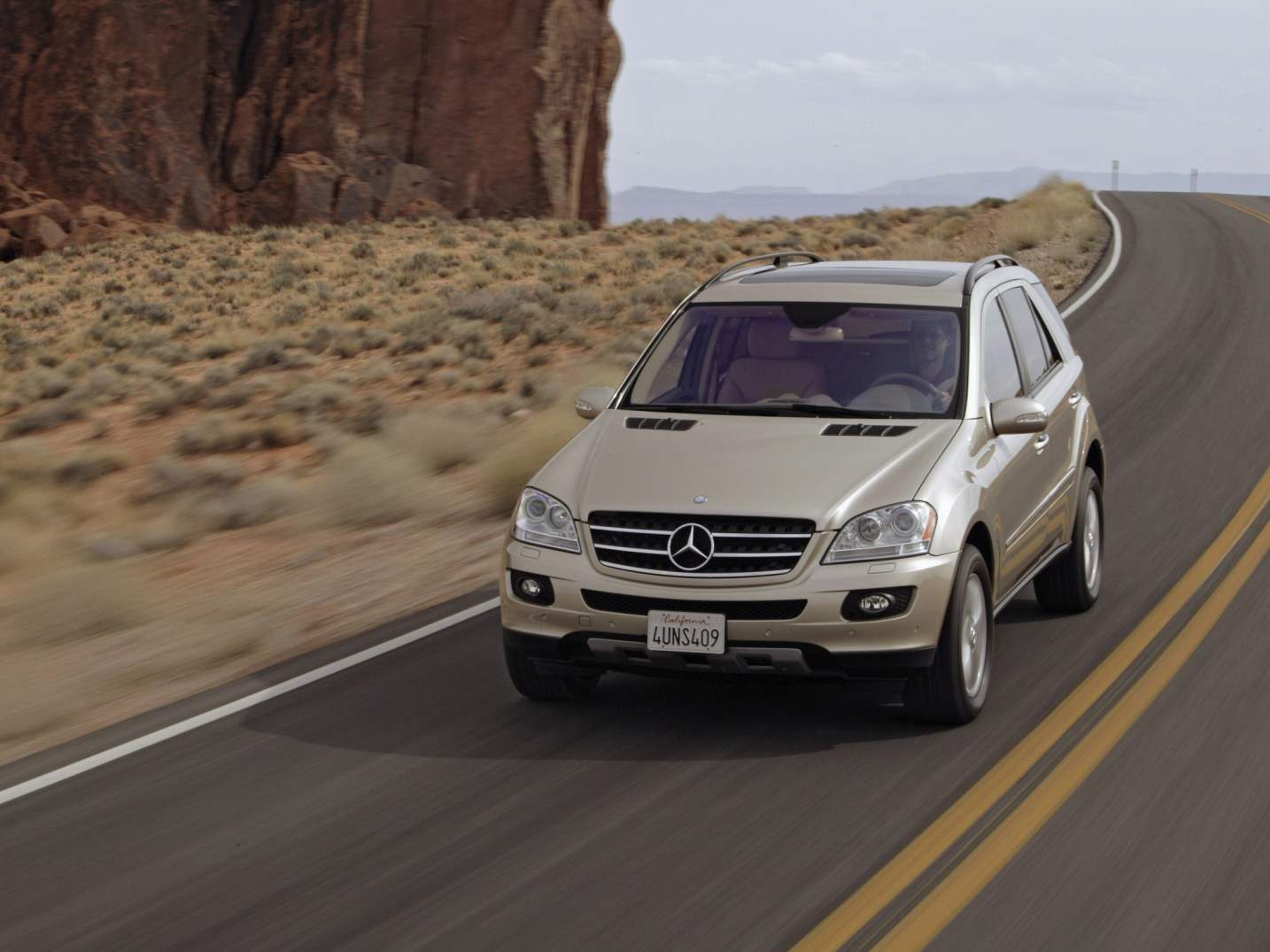 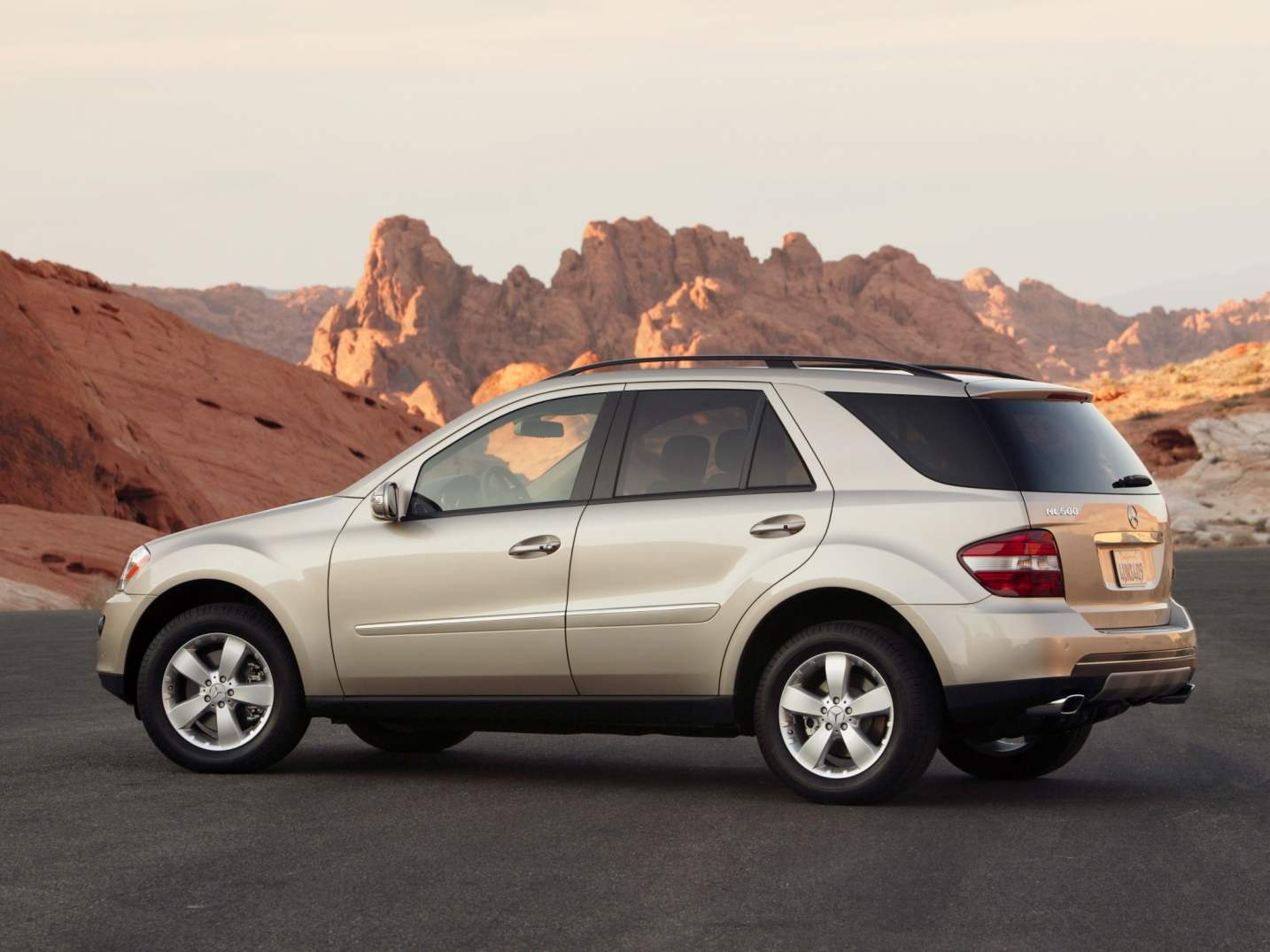 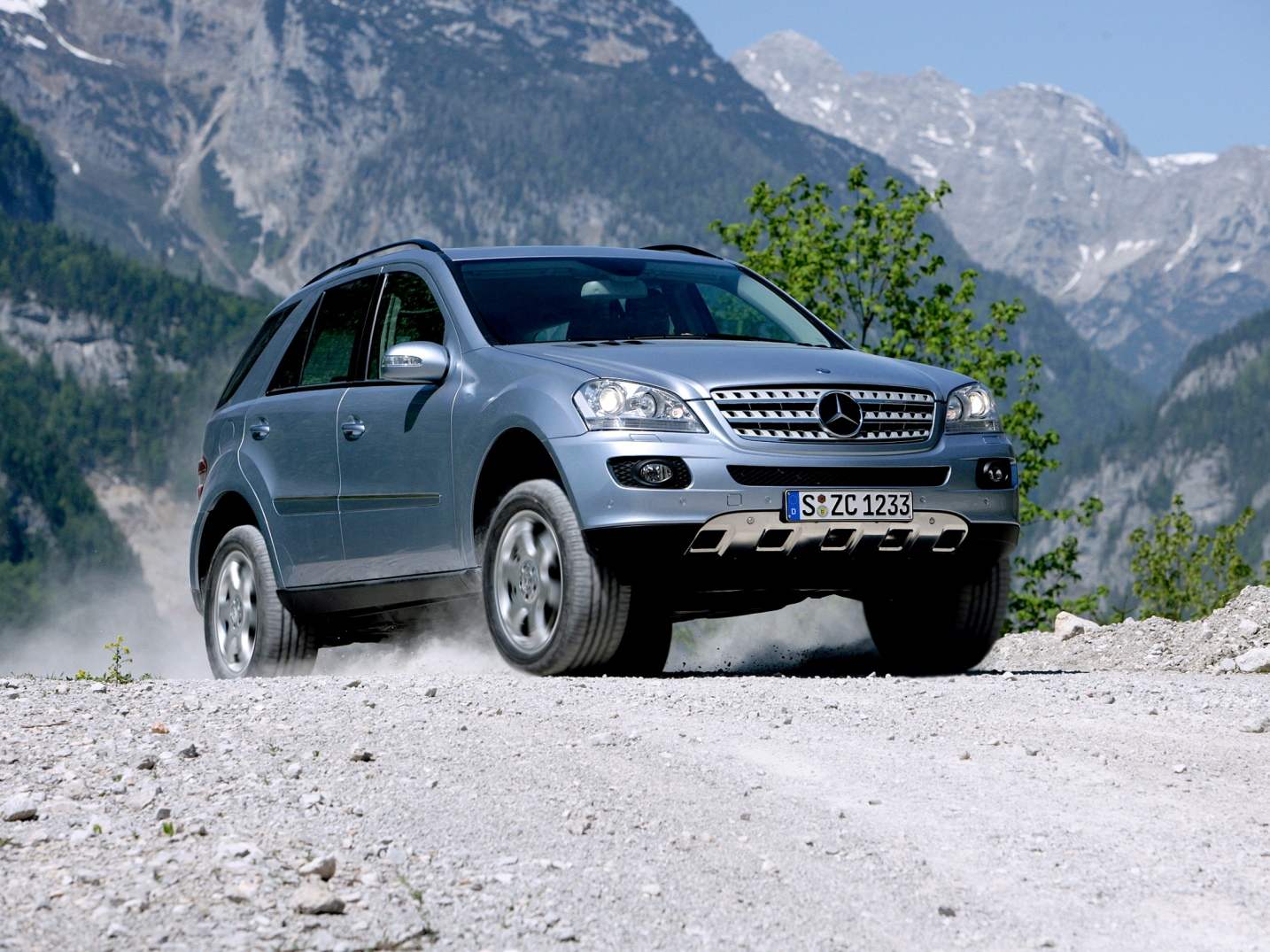 MERCEDES-BENZ ML350 — car with a V-shaped “six” power of 272 HP edition 2005
A new car in this class, designed by the designer of Mercedes-Benz Andreas Doifiles differs significantly from its predecessors. First of all, the MERCEDES-BENZ ML edition 2005 instead of the body frame construction — monocoque. While its stiffness has not decreased, but significantly increased that can be attributed to the wide use of high strength steels. Improved aerodynamic quality of the car — the drag coefficient CX has decreased compared to the MERCEDES-BENZ ML from a previous release, from 0.40 to 0.34. The designers have also managed to reduce by 70 percent the lifting force acting on the rear part of the body.
Radically changed the interior of the car. The Central console is now visually connected with the tunnel, instrument panel with speedometer and tachometer and located between the electronic display is very concise. The testers, however, noted some discomfort use of many shift paddles, but the driver’s adaptation to the workplace is fast enough. By the way, the ignition key in the usual sense all of us have no car — it replaces the key FOB, which may be the driver in my pocket (electronics recognizes it remotely) and start the engine and disabling it produced a large size button, located to the right of the steering wheel.
Firm Mercedes-Benz has traditionally paid great attention to the improvement of passive safety of its vehicles, and MERCEDES-BENZ ML is also embodied all the modern achievements in this field. In its basic equipment includes six airbags in conjunction with the inflatable curtains, which will be triggered when the rollover simultaneously with pre-tensioners. Surcharge side airbags can be installed for rear passengers. 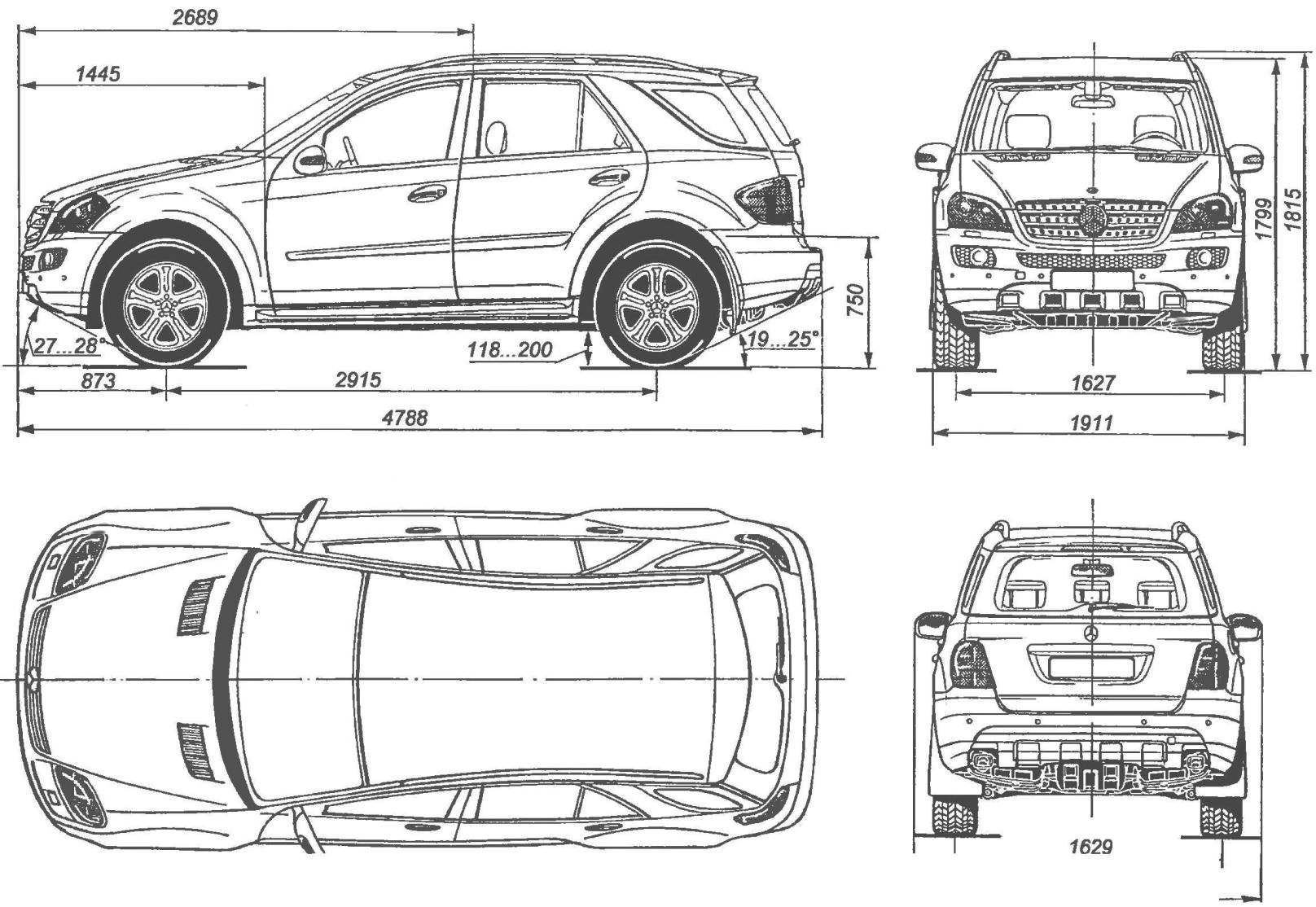 The geometric scheme of the car MERCEDES-BENZ ML-class

The pneumatic suspension of the MERCEDES-BENZ ML-class (A – front, B – rear) 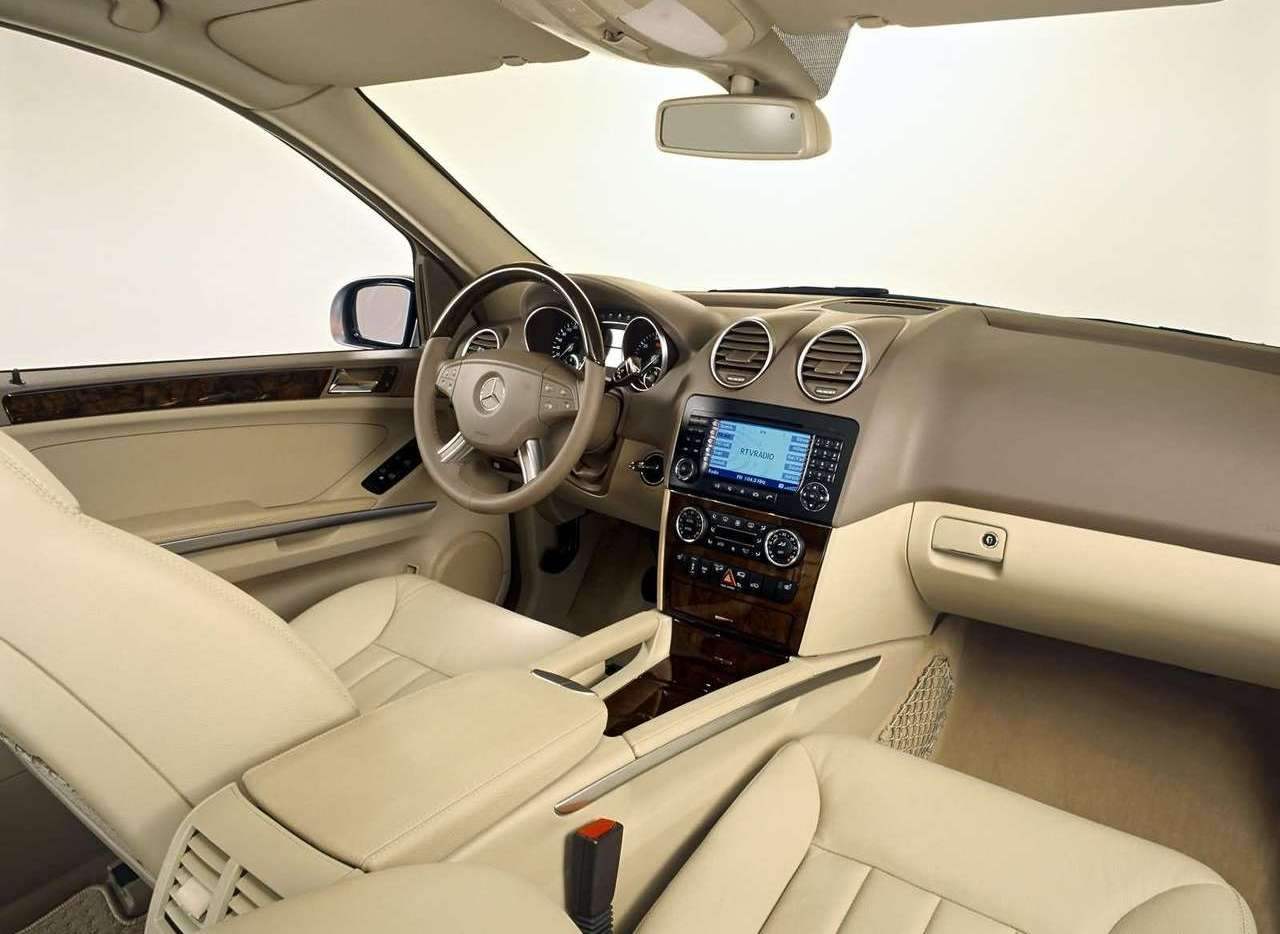 The interior front of the cabin of leather, wood and aluminum inserts. To the right of the steering wheel — engine start button

Instead of the usual ignition key — electronic key FOB that is recognized by the car remotely, start the engine by pressing the button “Engine start stop”
Also on order MERCEDES-BENZ ML and equipped with Pre-Safe — the threat of an accident (signaling sensors ABS and ESP), it prepares for a possible attack — tightens the front seat belts, closes the sunroof and causes the front seat to a position optimal for the airbag deployment.
Another device, called Neck-Pro, will take care of the protection of the cervical vertebrae front passengers — a rear impact, the head restraints move forward 40 mm and upwards by 30 mm.
The car has a new independent suspension — double-wishbone front and multilink rear. By order of the car can be equipped with Airmatic adjustable air suspension with shock absorbers, which are located inside the springs, working in conjunction with the gas strut and adjustment of the suspension characteristics.
By the way, MERCEDES-BENZ ML can be produced as in the variant of the crossover, ie a car, almost no going on dirt roads, and a full-fledged SUV. The latter is more expensive than the first approximately 1900 euros — for this price, the machine is equipped with off-road Pro Off-Road, which includes Airmatic air suspension and two-stage transfer case-demulti-plicator the gear ratio for gear ratio of 2.93:1. By the way, switch rasgado can be in motion at speeds up to 40 km/h air Suspension provides the car with adjustable clearance between 181 to 291 mm With ground clearance of 291 mm the machine can overcome the Ford a depth of 0.6 m.
Air suspension works well and on the highway, providing a magnificent ride — cracks, and small potholes in the asphalt, the car barely notices. Well he behaves and cornering thanks to the controllable attenuators — ADS (Adaptive Damping System) depending on the angle of the steering wheel, the speed of the machine and the testimony of the three acceleration sensors provides the optimal dampers for the selected mode of motion stiffness. The response speed of the system is 0.05 s. 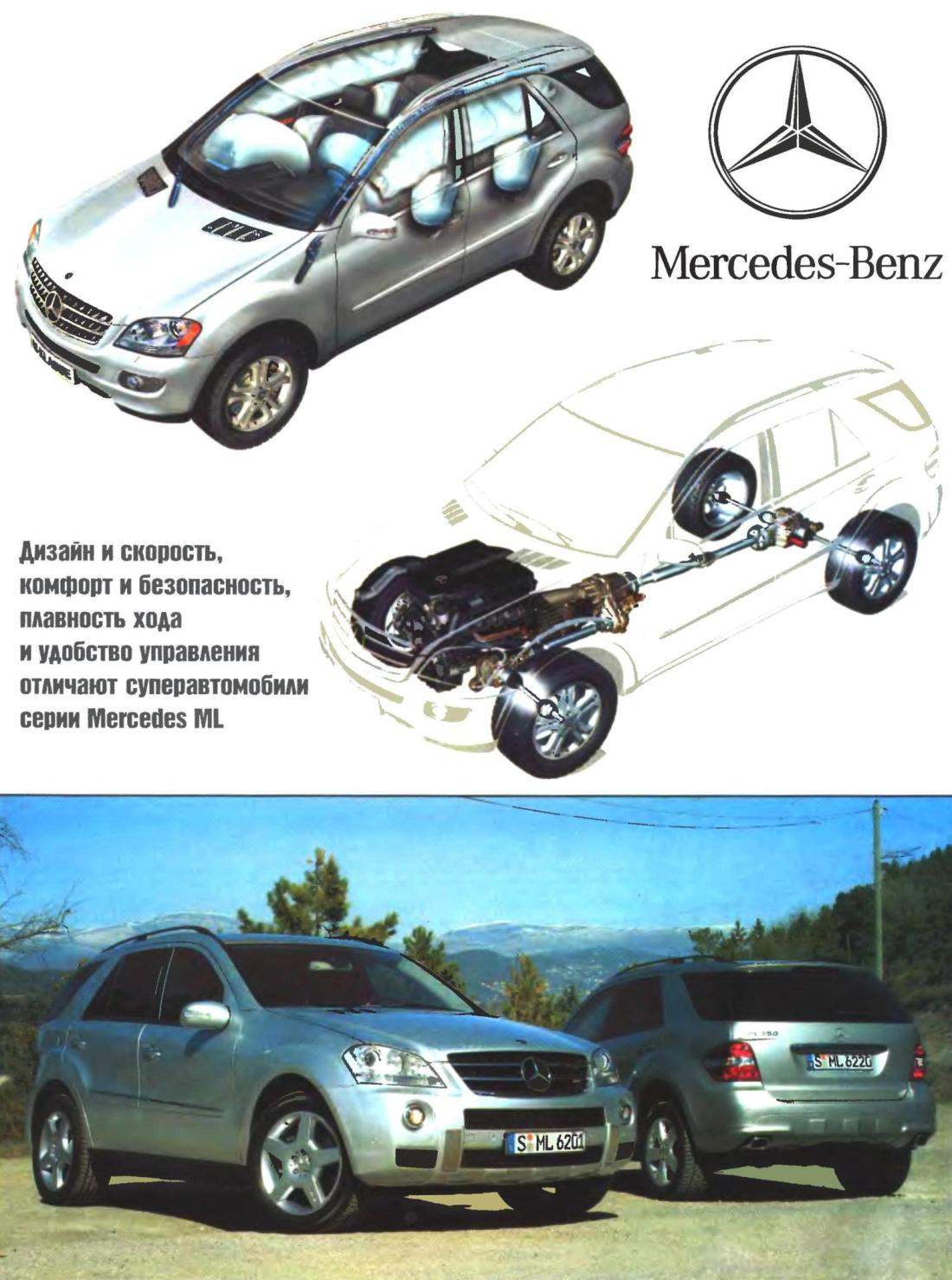 The powertrain of the SUV a few blocks. In Auto mode, all diffs are free, but built into the center differential’s multi-plate clutch is electronically smoothly change the degree of differential lock from 0 to 100 percent. When you overcome the difficult phase, by turning the handle locks the Central, center and rear differentials.
When crossing hills or ravines with prolonged ascents and steep descents, the driver can turn the system Downhill Speed, which automatically maintains a safe downhill speed on steep — up to 18 km/h on a not too steep — up to 6 km/h on excessively steep 4 km/h If the driver will stop the car on the lift, then when driving off it will not slide down system Start-Off Assist into it the wheels only when the driver presses on the gas pedal.
New MERCEDES-BENZ ML comes with an extensive range of engines and the only seven-speed automatic transmission. By the way, to this time in the automotive world were issued mainly five – or six-speed carton machines. Control new box for MERCEDES-BENZ ML is also unusual for motorists: instead of the usual outdoor lever — small-hand stalk lever under the right hand of the driver. Job with it, the mode of operation of the automatic transmission is as easy as switching the turn signal. If the algorithm of the box does not suit the driver, he can change gears with the buttons on the steering wheel.
New MERCEDES-BENZ ML became longer and wider, but despite this, compared with the three-row seven-seater predecessor, it has five seats, including the driver’s seat. By the way, the firm is preparing to release in its American branch, and all-wheel drive seven-seater wagon R-class with three rows of seats designed for the MERCEDES-BENZ ML
The trunk of the new car is spacious enough, its capacity is 0,551 m3. If you fold back the rear seats and take out the pillow, Luggage capacity will exceed 2 m3. Under the boot floor has space for a small bag, detachable towbar and REM-kit tires (new ML in the base of the spare wheel is not provided However, for an additional fee, the company can install on the rear doors a special bracket with a spare tire).
Technical characteristics of the car MERCEDES-BENZ ML-class

According to experts of Mercedes, when the engine is paired with seven-speed automatic transmission of its turnover on average 20 percent lower than with a five-speed boxes-“automatic”. In the result, the average fuel consumption of the new MERCEDES-BENZ ML500 for about 5 percent less than the previous model with the same engine and five-speed automatic transmission.
However, the purchase of fuel — not the main item of expenditure for those who want to become the owner of such a supercar About such things they instantly forget upon learning the price of a new MERCEDES-BENZ ML diesel for modification ML280CDi firm requests 59 000, and for the ML500 petrol — 80 000 Euro.
I. EVSTRATOV