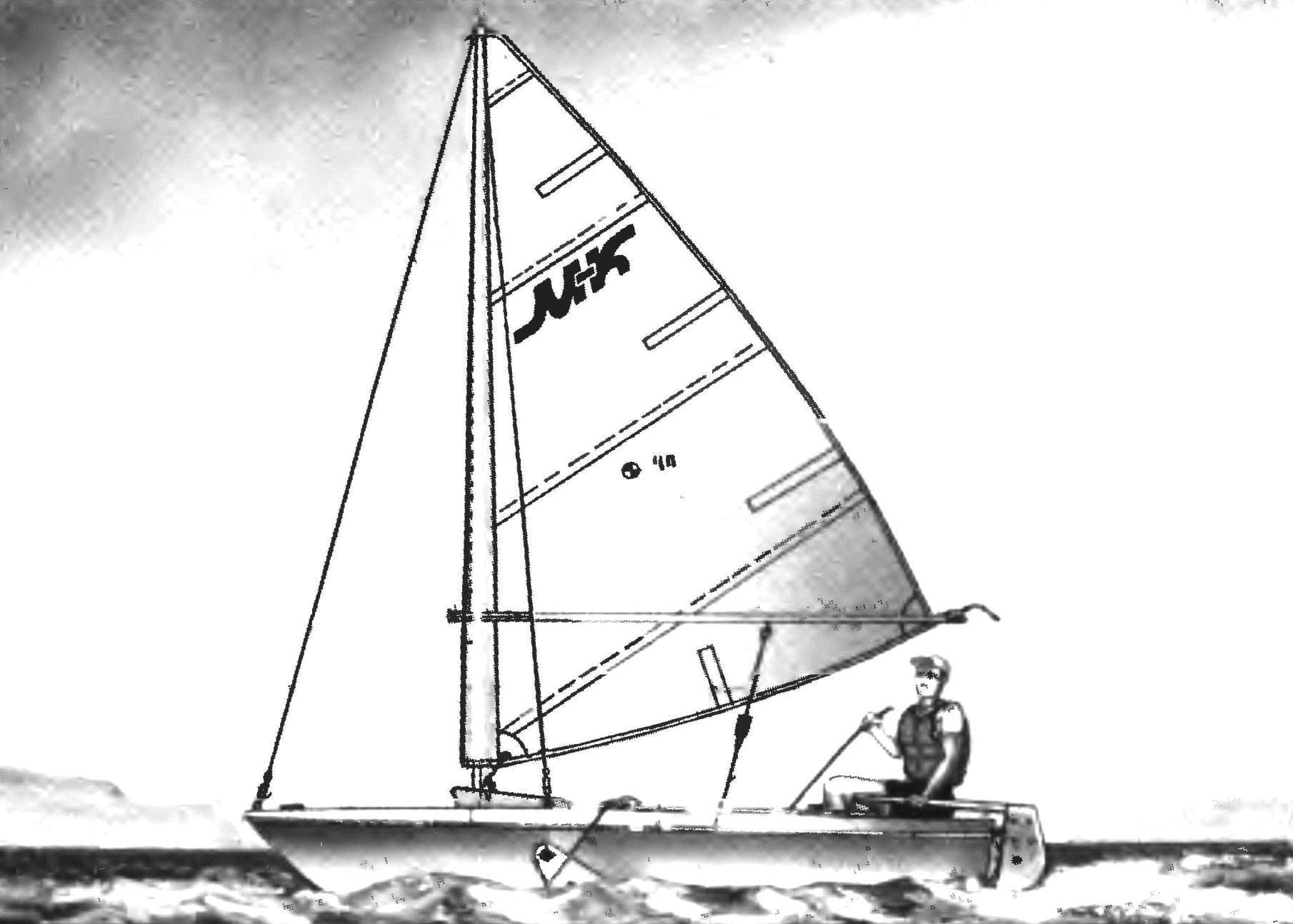 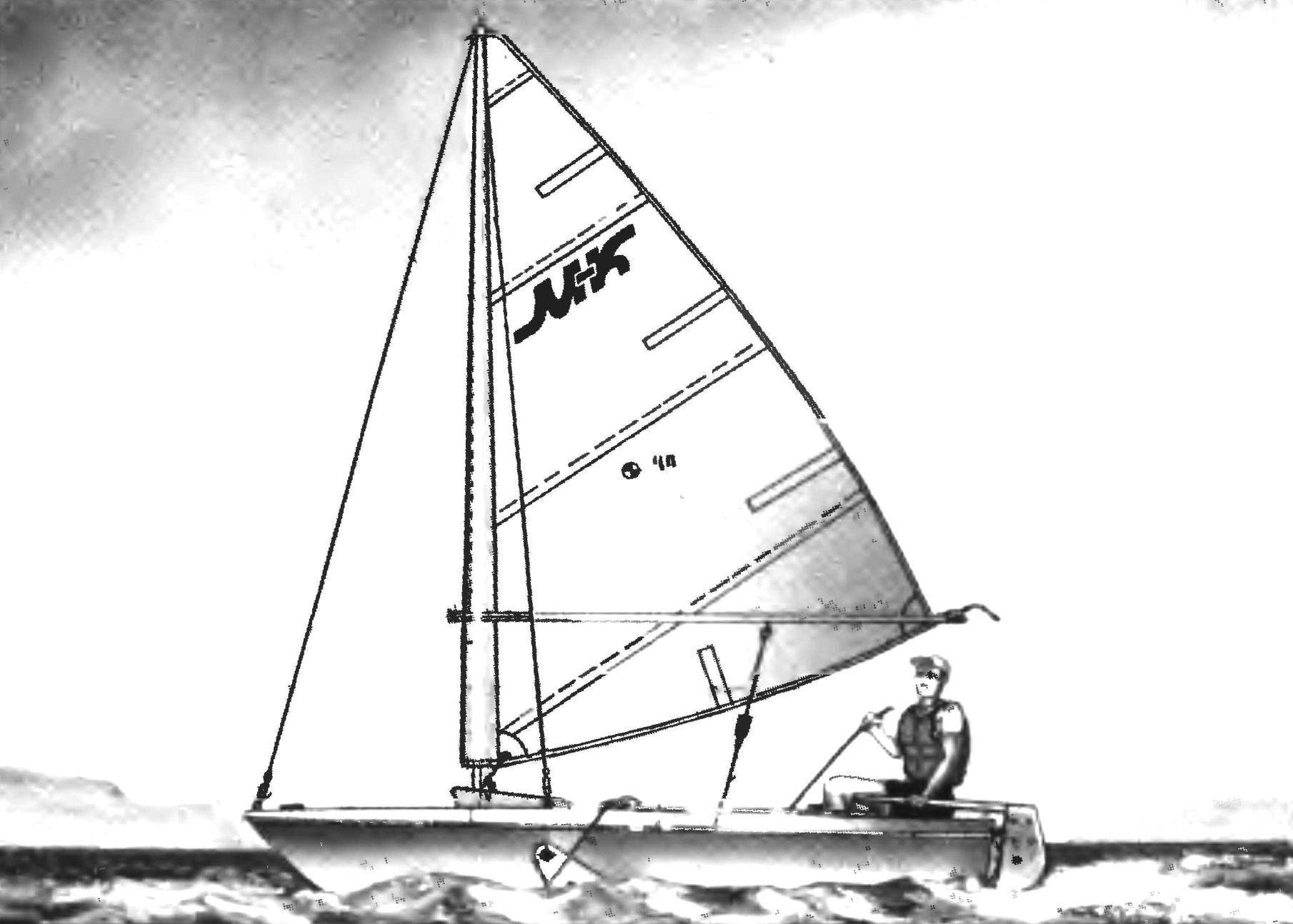 There is a perception that sailing is a lot of people with high incomes. Of course, in relation to racing dinghies and cruising yachts, this is largely true. However, from a small homemade ahtoska you can get no less pleasure than the solid cabin of a sailboat, the more it will cost you significantly less.
In our today’s article we introduce readers to design a simple Dinghy unconventional designs — with housing type “sea sled”, a sail-like windsurfer and two hinged verzemi.
The choice of housing type was due to its seaworthy properties, small wave generation and high lateral resistance, ensuring minimal drift of the boat on sharp courses. The choice of sails aerodynamic qualities due to the lack of a classic geek and use of mast-pocket streamlined shape. And the use of mounted sverzov — the desire to obtain a hard case design, devoid unreliable the centerboard structure.
The body of the craft — classic for light craft such a displacement with lines of type “Sharpie”: a set of transverse slats cross-section of 50×20 mm and a cladding made of waterproof plywood with a thickness of 4 mm.
All the frames are going in the plywood brackets with epoxy glue and reinforced by a homemade rivet — segments aluminum tube of 5 mm diameter with a wall thickness of 0.5 mm, a rivet with a special hammer and support. Frame Assembly is in the position “up the keel”, to which side rails of the frame are performed with technological allowance for height, which allows you to set them on a mounting base (particle Board, the shield of thick boards or even smooth floor) in accordance with the theoretical drawing of the hull. Based on previously delineated the main lines of the planned projection of the plane of symmetry and the axis of the formers, mounted by means of a plumb that allows you to control their vertical position. Temporarily fix frames are made using scraps of strips diagonally fixed on their sides. 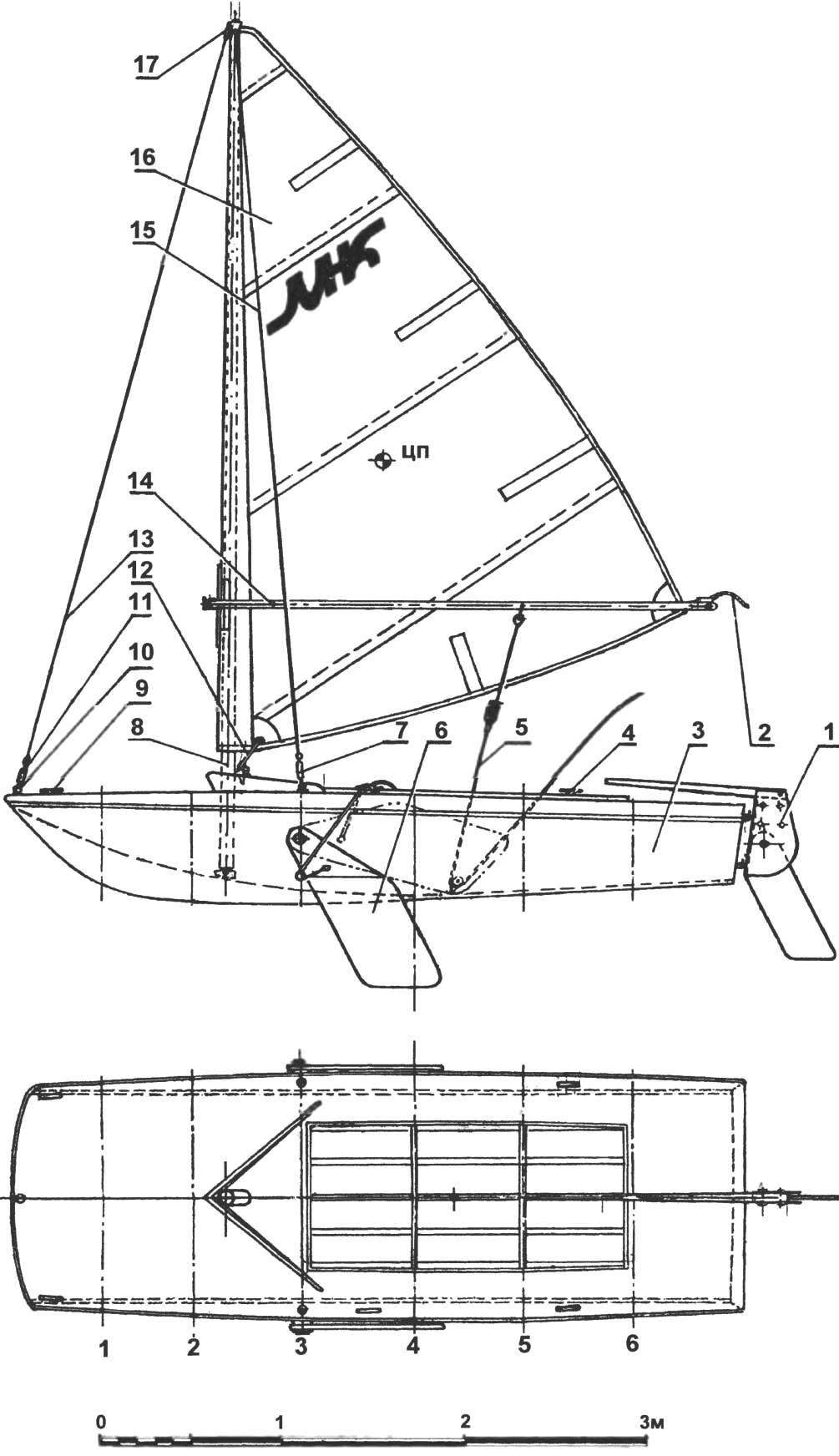 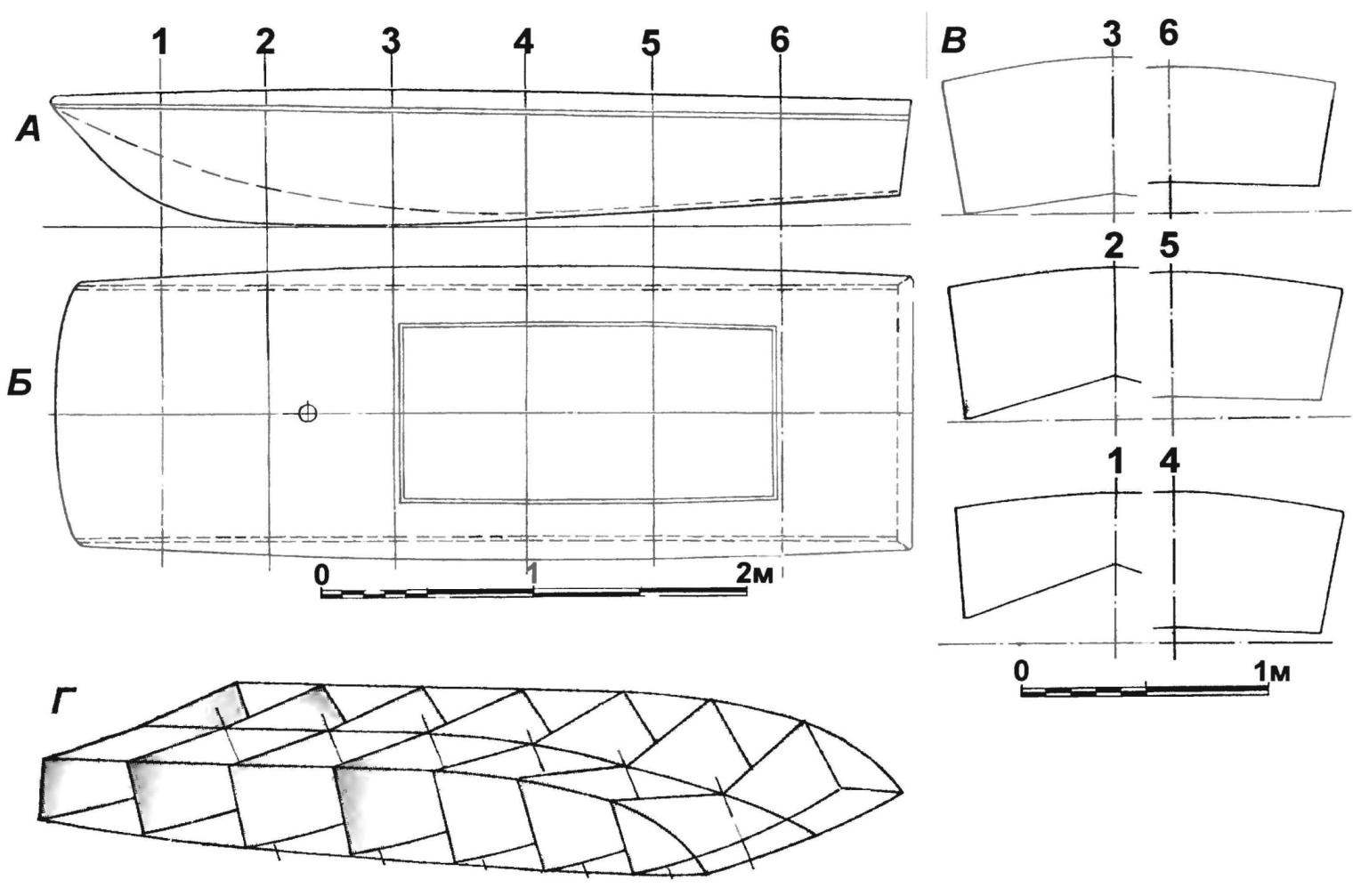 The theoretical drawing of the hull of the Dinghy
(A — side, B — Poloshirt, In — body, G — axonometric image)
The ribs are laid out and cut the grooves for the longitudinal elements of the set, attached with epoxy glue and galvanized screws. After polymerization of the adhesive frame marquetta using a plane, rasp and glued to a plywood plate coarse-grained skin, the control of the external surfaces of the frames and stringers are made with flexible slats applied to multiple frames.
For covering the frame from plywood sheets cut blanks (pre-it makes sense to make cardboard patterns and fit them in the appropriate places of the frame). To stitch the workpiece should be “on us” with epoxy, and the length of the joint should be not less than 50 mm. the Casing frame is with epoxy glue and galvanized screws.
After curing of the adhesive body is turned, the frames are cut technological allowances, after which the already developed technology is sheathed deck. Thus, the case essentially can be considered finished, although there are still finishing operations — Vykurovanie and zashpaklevyvaem (the latter operation is best performed with a mixture of epoxy glue and talc), taping if necessary, one or two layers of fiberglass, finishing grinding and coating of the case inside and outside with a waterproof varnish (e.g. parquet, acidic hardener). Final painting — two or three coats of enamel. At the end of the cockpit is enclosed with oak slats-coamings, the edge along the fendering contrived also oak lip on the deck spray deflectors are installed, and on the cheeks are fixed with screws aluminum strip with a thickness of 4 mm.
And the last one. In the transom, at the level of the bottom drilled two holes to drain the water — their diameter should be such that they could be smothered with a plastic tube (e.g. from a bottle of champagne).
The mast of the Dinghy pine, glued, it is a truncated cone with a base diameter of 50 and 35 mm. Ready mast carefully vyshkurivaetsya and is covered with several layers of varnish parquet. On a sailboat, the mast is secured with standing rigging — pair cables, the forestay (made of steel cable with diameter 4mm) and a spiral lanyards. At the top of the mast is fixed a threaded stem, which when installing the mast fits over the steel fittings with three ears for installation of the forestay and the guys. At the bottom of the mast there is a spurs — steel rod on which the mast can be rotated in pole-steps.
The sail of the Dinghy, as already mentioned, patterned vindserfinga. The production of it should start with a pattern is to draw it on a level floor or even an asphalt Playground. The first thing with a tape measure is laid out a basic triangle in the figure sails it is marked with the letters ABC. Then deposited the value of sickles at the front, back and bottom Catarina, and through these points are smooth curves. Simple patterns for tracing can be obtained from the long strips, which should bend and pull the ends of the cord-like string of the bow. 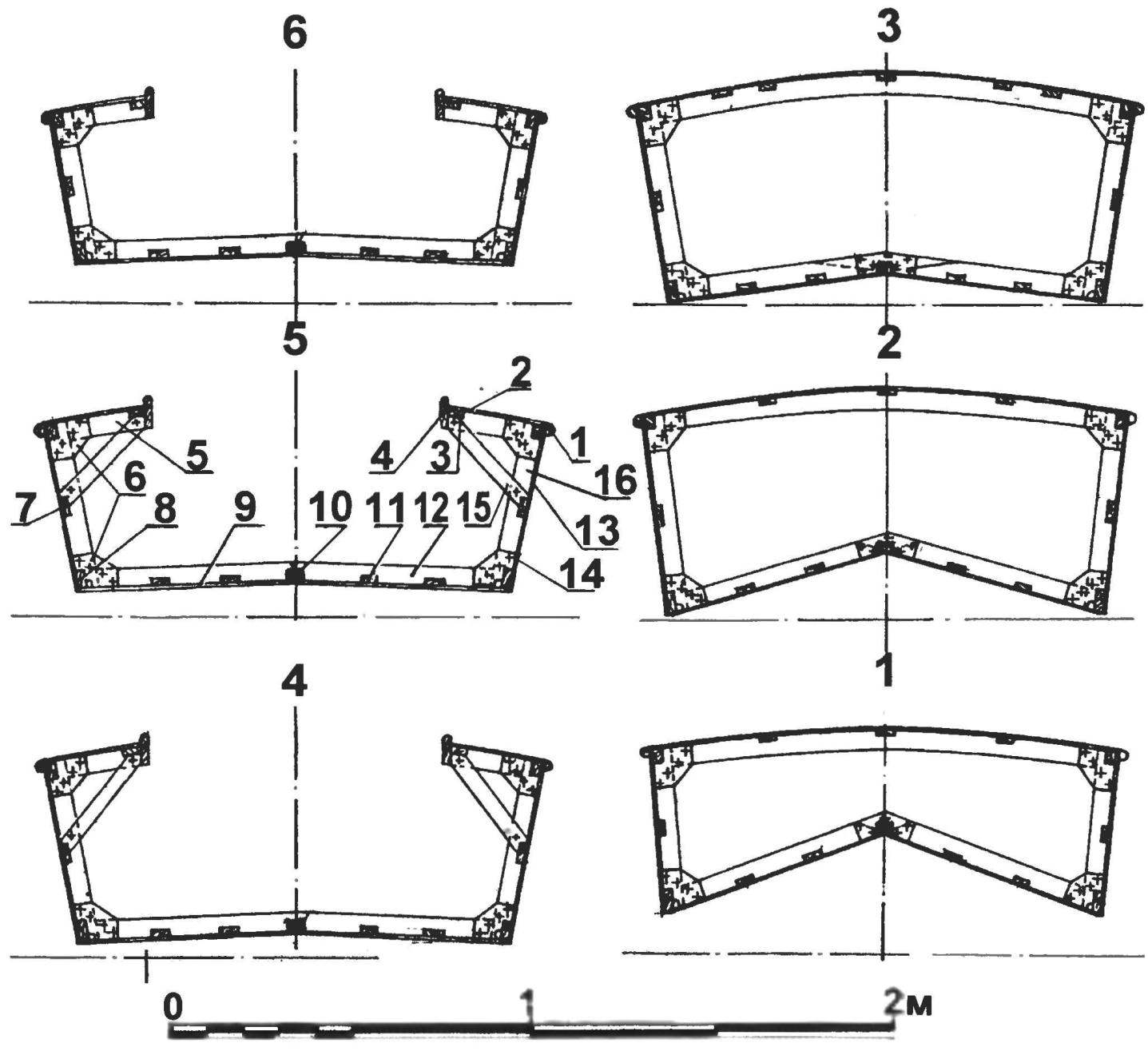 Section of the housing by ribs of the Dinghy:
1 — collar (oak, rail 25×25); 2 — deck plating (plywood s4); 3 — deck stringer (pine, rail 15×40); 4 — coaming (oak, plank 10×80); 5 — beams (pine, rail 20×60); 6 — knice (plywood s5); 7 — side stringer (pine, rails 15×30); 8 — bilge stringer (pine, battens 20×40); 9 — hull bottom (plywood s4); 10 — keel (pine, rail 30×30); 11 — bottom stringer (pine, rail 15×40); 12 — the bottom part of the frame (pine, rail 20×60); 13 — sheathing Board (plywood s4); 14 — tubular rivet (aluminium, steel 5×0,5); 15 — brace (two strips 15×40); 16 — lateral part of the frame (pine, rail 20×60)
On top of the drawing patterns are arranged cloth fabric, as shown in the figure sails. The pattern is calculated on the flag’s width 1020 mm ( when using fabrics of different width, this fact should be considered when raskryvanie). Please note that the first line is the seam from the tack (bottom front) corner of the sail, and the markup of the remaining stitches is performed in parallel with the first step corresponding to the width of the existing fabric. Laid out on the pattern of the cloth fastened with pins, and then sostragivajut double seam such as “zigzag”.
After this, the workpiece of the sail is trimmed to the rear, front and bottom katarinam and sewn pockets for lat — elastic plastic or wooden plates to support sickles rear and bottom skinoren. Later in galava and Shkotovo corners (both sides) prostrachivajut triangles-booty cut from a thicker than the sail cloth.
Rear and lower luff of the sail are sealed with a synthetic tape with a width of about 30 mm. If it is not there, you can double-tuck fabric sails and zastrochit sealing double seam (however, this must not forget when cutting the workpiece sails to leave a seam allowance of about 30 mm).
LGA will approach suitable for the size of flat wooden or plastic school ruler with a thickness of 2 — 3 mm.
A Dinghy with a sail of this type, as already mentioned, instead of the classic geek has hicok-wishbone, curved duralumin pipe with a diameter of 22 mm with a wall thickness of 2 mm. In its front part there is a clip for attaching wishbone on the mast is bent in the form of the letter “U” steel pin with thread M8 on the ends, the curved part of which is stretched a rubber tube. In the rear — pinch bolt with nut-lamb and a pair of tubular retainers. The latter is designed to fix start passing through the grommet in the sheet corner of the sail and is designed for stuffing sails.
The sail is controlled by the boom-sheet, consisting of bridles, mounted on wishbone, equalizing block and the sheet, passed through a block fastened to the keel with a swivel.
Additional parts are cut from 12mm plywood and the Front part of each rounded, and cut back on the wedge. After zashpaklevyvaem and grinding three times additional parts are covered with a waterproof varnish and enamel. Hole of the hinge is enhanced dural washers-pads and dural sleeve (piece of pipe).
Axis Chorzow is a dural tube with fixed steel rollers at their projecting parts are mounted, and these parts of the sailboat. Mount sverzov on the axis of the pair of nuts with thread M 12×1,5. Fixing sverzov both raised and lowered position is carried out using additional parts parts — nylon Sterlikov fixed on the ducks.
The steering device consists of balleroy box, which is hinged to the tiller and steering the pen. Rumple is an oak rail with variable section. Ballerina box is going on the rivets of a pair of dural cheeks and unifying their channel. Additionally cheeks tightened with four bolts and nuts passed through his cheeks, and installed them between the spacers. The steering is feather — from 12 mm plywood, profile it is made the same as shvartza. Through balleroy box missing start mounted on steering pen, with the pen can be raised at the approach of the yacht to the small place.
To properly configure a yacht should, if possible, to combine on the same vertical line centre of lateral resistance and centre of sail Past is easy to tell — it lies at the intersection of the medians (a median is the line connecting the vertex of the angle and the middle of opposite sides) of triangle ABC in the figure of the sail. Well, the center of lateral resistance it is better to determine empirically, which requires the body with the lowered surcame slowly pull sideways pinned in his plane the end. The coincidence of the point of attachment of the tug with the center of lateral resistance of the hull will move blaskapelle, but in all other cases it will immediately begin to unfold. Remains only with a few samples to find the unique point on the plane and this will be the center of lateral resistance. By the way, it can to some extent move, raising or lowering additional parts.
Defining the required point, should push forward from her previously found the distance from the center of the sail to the mast: this will indicate the optimal position of the mast on the hull of the Dinghy. 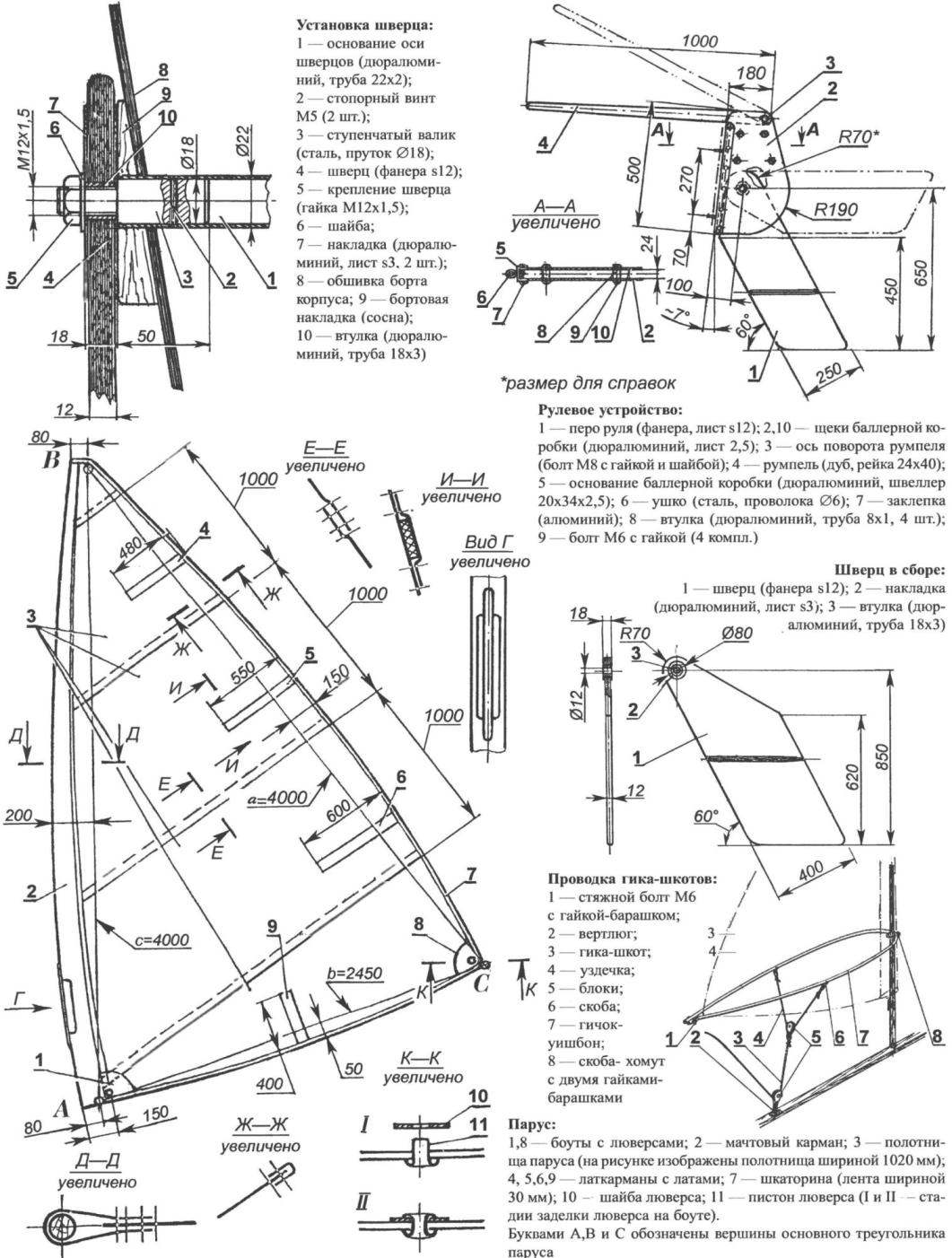 In conclusion, it should be noted that the Dinghy belonging to the class of “devil cat”, it is easy to turn into a “Bermuda sloop”, arming another sail — staysail. Thus the aerodynamic system of the two sails will increase accordingly should increase and speed.
A few tips on maintenance of a sailboat. To ensure the flooding of flooded boat in the forepeak (the front part of the room) to lay the air tank, for example, an inflated inner tube. Leaving the water, don’t forget to wear a life jacket. Do not try in whatever was odrediti the Dinghy with a strong squall — the best result in the sailboat to the wind and upset the geek sheet. On large bodies of water always try to be in sight of the shore — zaboltavšis ‘ with a passenger, you can very quickly lose familiar landmarks.
In conclusion: in any sailing campaign — a fair wind and seven feet under the keel.
I. MNEVNIKI