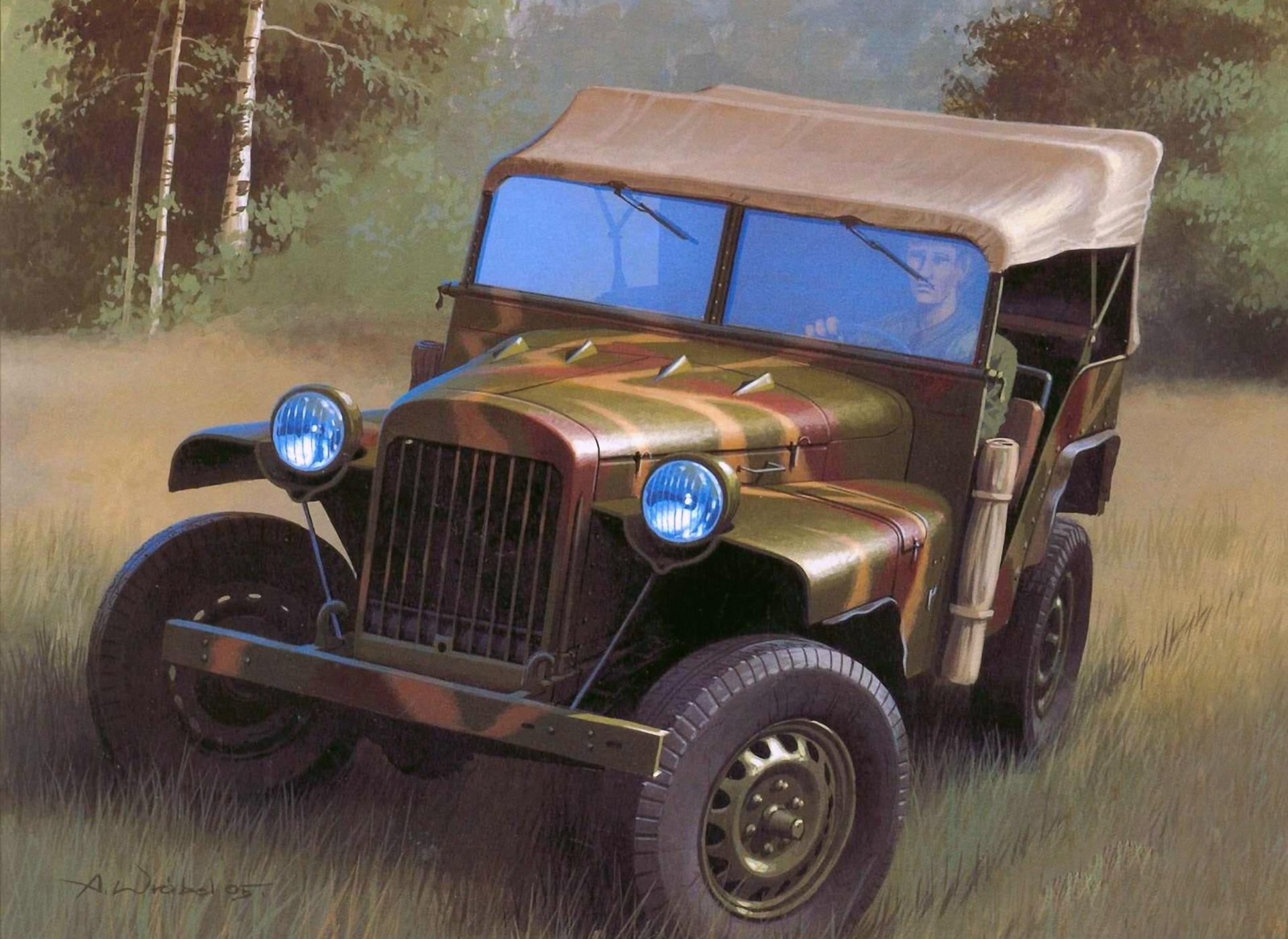 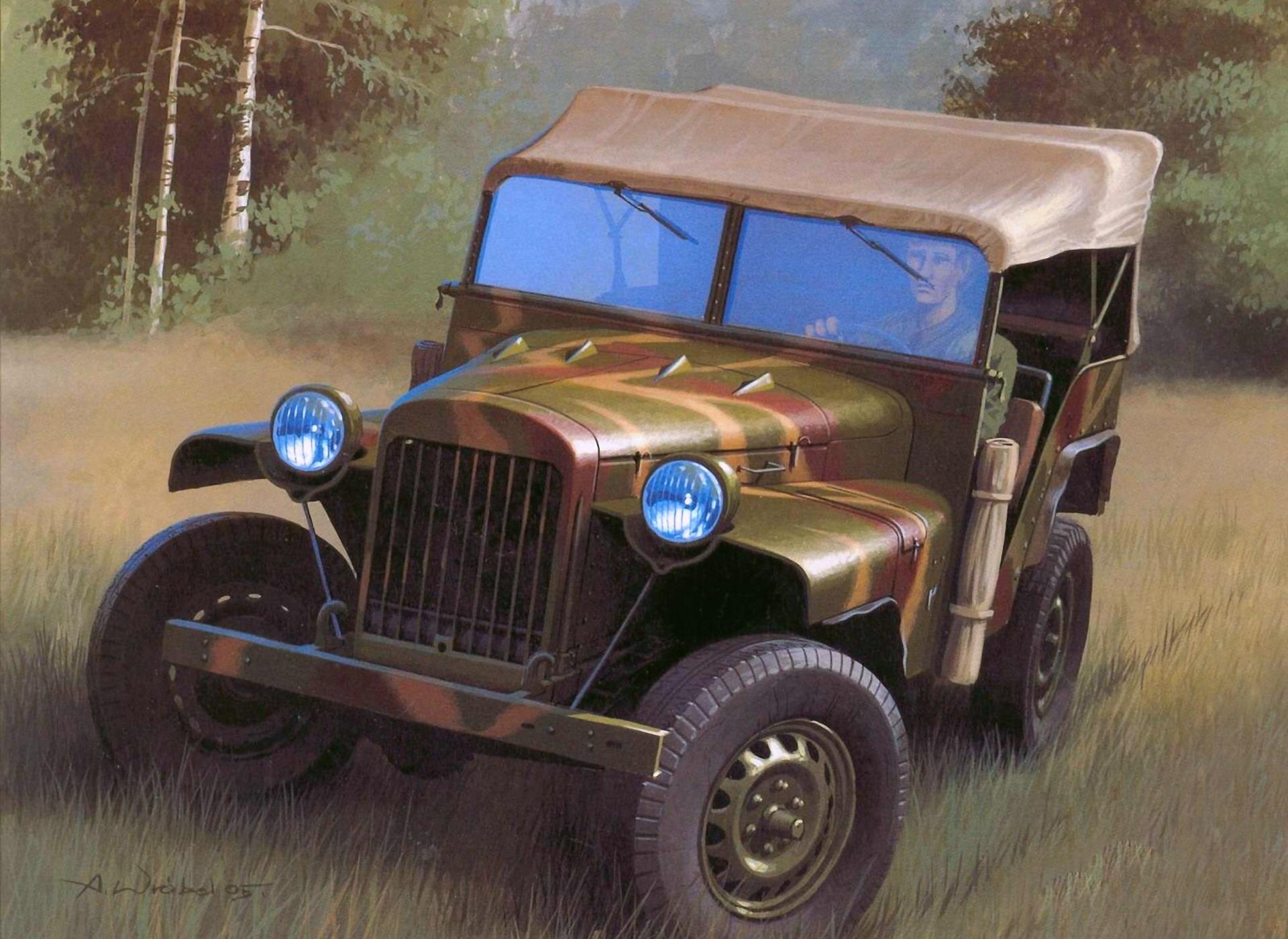 the Hero of our story – the GAZ-67B, one of that specific type, which during the Second world war became known as “jeep”. But even a few years before the appearance of this model in the Soviet Union already had cars, which had on its creation and design is quite a big impact. So refer to the summer of 1936 when Gorky (until 1932 and again now Nizhny Novgorod) automobile plant was built the first prototypes of the GAZ-M1 (“emka”).
This machine is designed under the guidance of V. A. Grachev autoconstructor, was designated GAZ-61-40 with all-wheel drive. It was a outdoor version of “emka” (GAZ-11-40), is equipped with three-stage gearbox four-speed. From behind her, placed the transfer box were the prop shafts to the front and back leading bridges. Drive front driving axle may be disconnected.
A difficult task was designing the front axle. As its wheels were driven, they had to connect to axle shafts by universal joints, and such, which at high (35° – 40°) angles of rotation of the wheels would create harmful vibrations and jerks. The best solution for a machine dependent wheel suspension was ball universal joint of equal angular velocities, the so-called hinge type “Rzeppa”. Today it is widely used in the front axles of cars of the raised passableness, but it was new and confusing.
GAZ-61-40 had a very good maneuverability on rough terrain and dirt roads, went well and marshy, sandy, snow-covered sections of the road could take the climbs a slope to 43°. Its advantages were obvious, and in 1941, the plant began production of this machine. However, serial samples (they are assigned an index of GAZ-61) was not open body and closed, the saloon is the same as on the six-cylinder “m” GAZ-11-73 (“modelist-Konstruktor”, 1974, No. 5). By the way, the GAZ-61 was equipped with the same six-cylinder engine as the GAZ-11-73. By the way, the GAZ-61 in the beginning of the great Patriotic war were used by our famous generals – K. E. Voroshilov, G. K. Zhukov, I. S. Konev.
When the war started, production “emok”, and hence the bodies on Gaza had to stop. In the first months of the front received the “pickups”, GAZ-61-415, with a canvas cabin. They were used to tow light anti-tank guns, as a coherent and command. Need them on the front was huge, and in the summer of 1941, V. Grachev, given the demands of wartime, in a very short time – literally a half-two months – designed easy to manufacture the car – the GAZ-64. In fact, whole new it was only the body, front suspension and radiator. The rest of it was completed from parts and components from previous cars GAS. 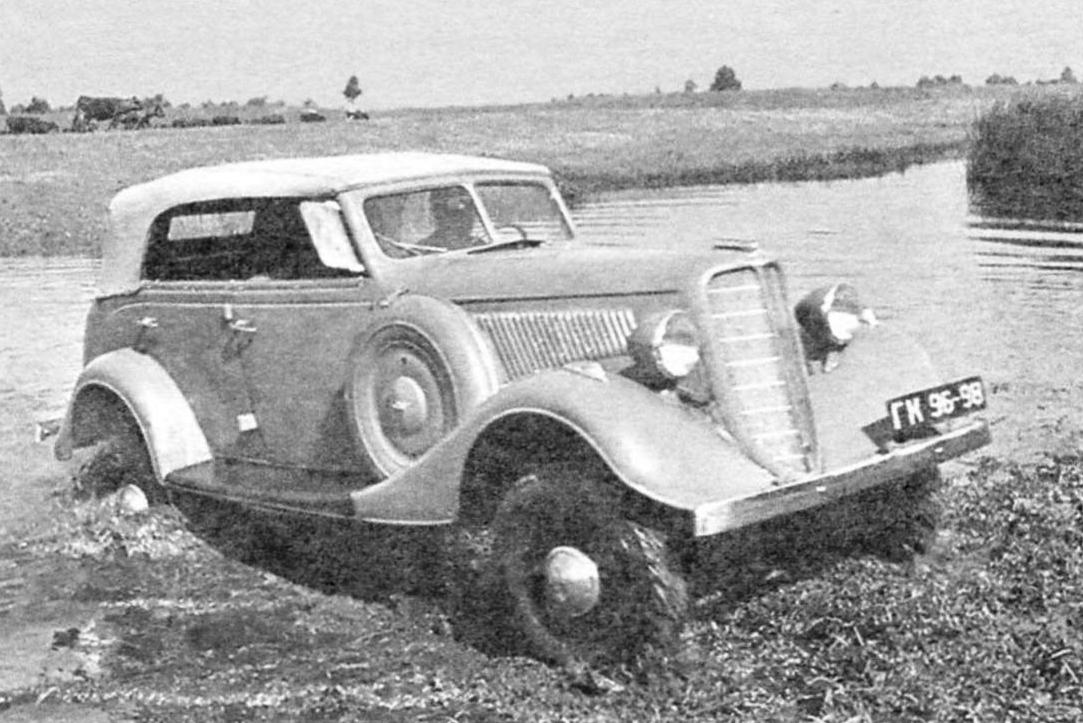 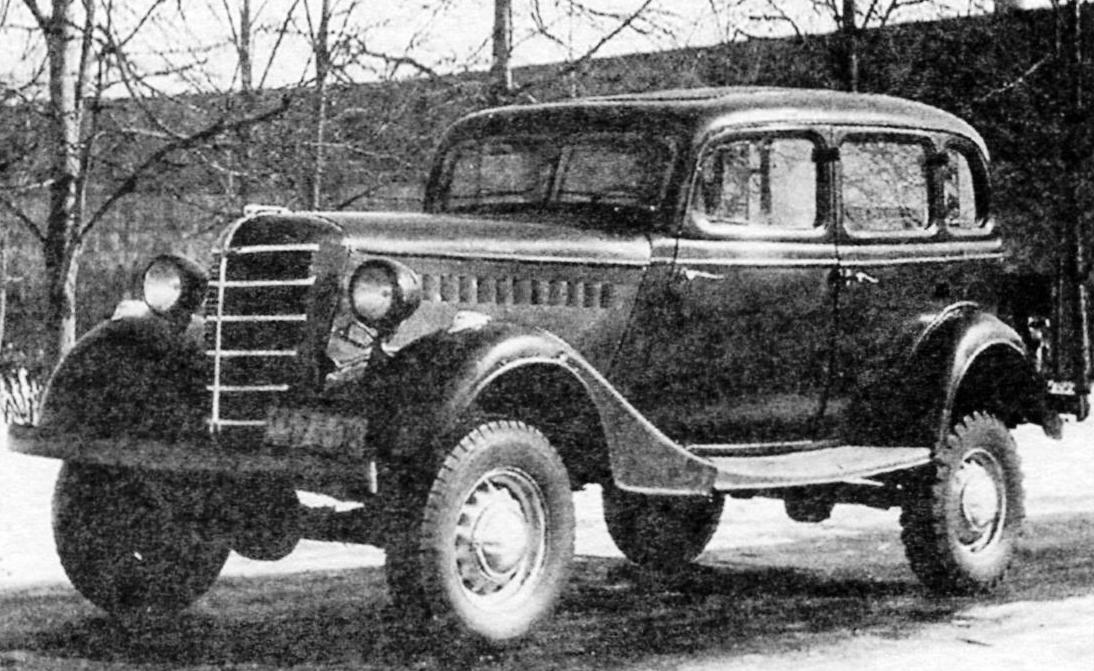 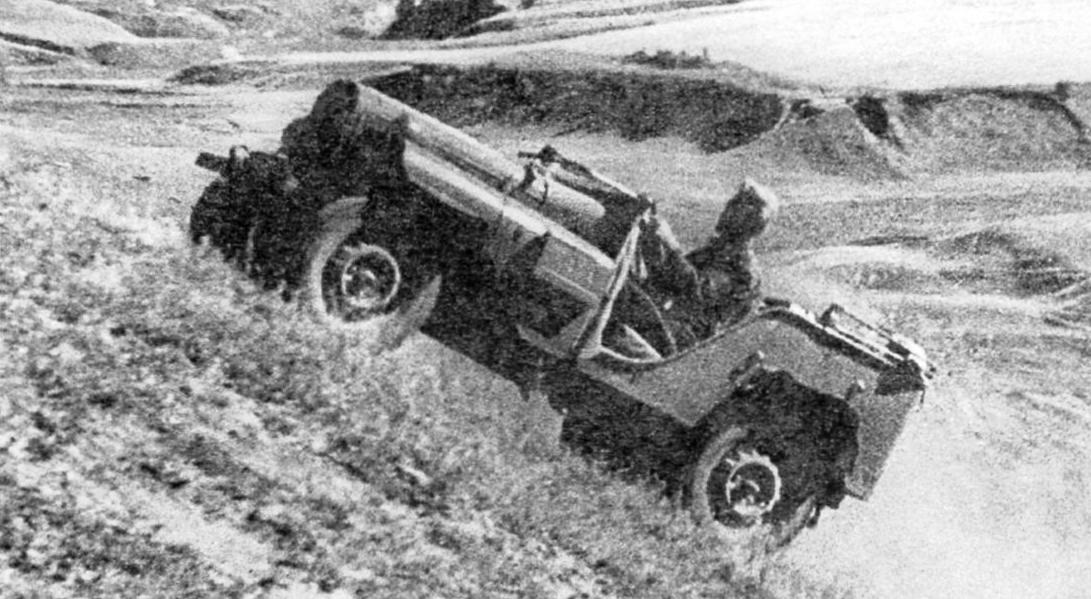 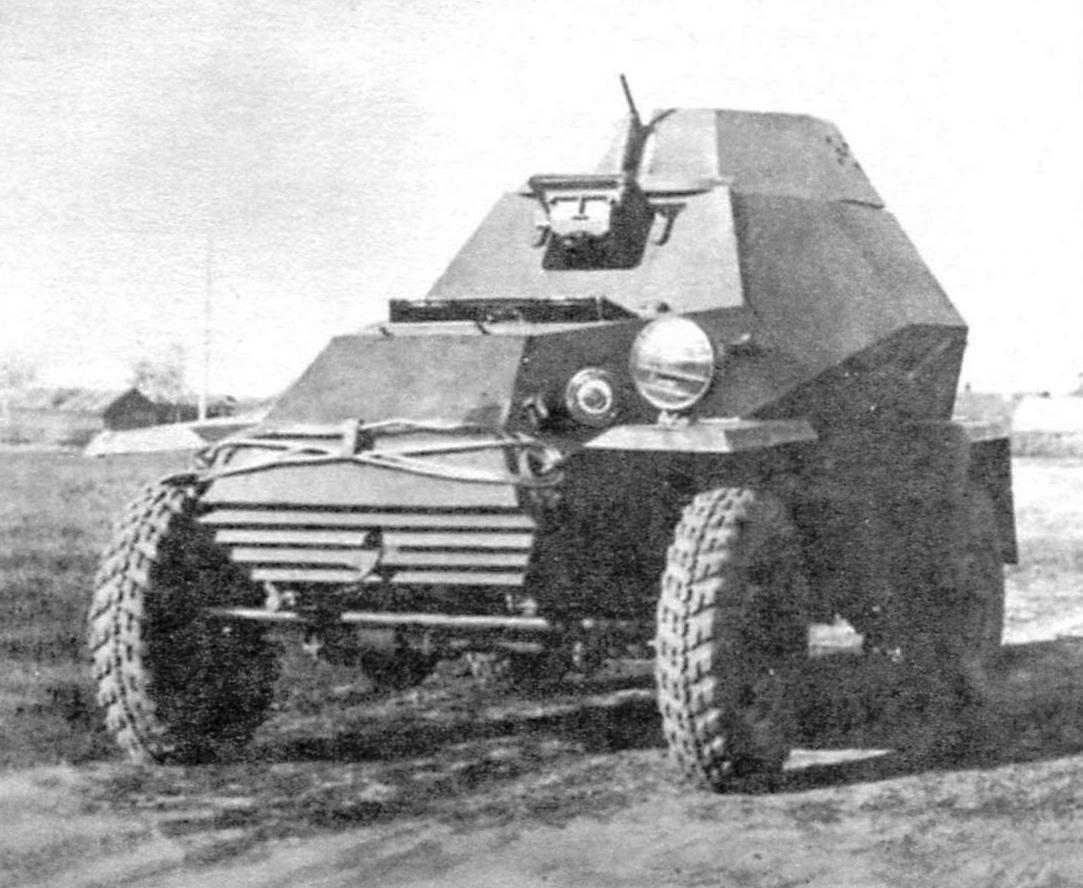 experimental GAZ-64 with a machine gun – tow antitank 45 mm gun with the limber for ammunition
Thus, the development of the GAZ-64 did not require a significant time and cost, simplified supply of spare parts. For example, the engine, four-speed gearbox, steering gear, fuel tank and instrument panel taken from “lorry”, and the front and rear drive axles with brakes, wheels and shock absorbers from GAZ-61. However, leading the bridges had to be reconstructed – their rut was reduced from 1435 mm to 1250 mm. Why? Because a technical specification for the design of the GAZ-64 was required to create a compact command and reconnaissance car with a length of 3.33 m and a width of 1.55 m. To provide the desired width of a car, had to go for alteration of bridges.
Easy-open body with folding canvas top V. Grachev designed to minimize the consumption of scarce during the war years the steel sheet. The car was missing doors (replaced with canvas sides), and the bulkhead had a small height. So if you need to speed up planting in the car, you can just “jump” across the Board. The shape of the body GAZ-64 allowed all the parts to produce predominantly with a flexible and hood (requiring expensive dies) reduced to the limit.
I must say, that of the GAZ-64 before the war was a precursor. In 1940, the Scientific autotractor Institute (now US) has developed a design of a light army reconnaissance vehicle terrain NACHI-AR. War prevented further work on this interesting machine. However, the experience was useful in the design and construction of the GAZ-64.
Many countries, in particular Germany, England, Italy, USA, started before the beginning of the war to the production of such cars. Later named, or rather nicknamed, one of the most common models of this type – “Ford-Dzhi-PI” (it was built according to the drawings of the factory “jeep”) cars like that were called “jeeps”. And GAZ-64, production of which was launched in the autumn of 1941, was the first Soviet “jeep”.
At the end of 1942, the GAZ-64 improved: expanded to 1466 mm rut both axles, instead of the semicircular cutouts in the bodywork over the wheels were the wings, as the track became more and body width has not changed. This step is explained by the fact that as a “jeep” and GAZ-64, which had a narrow (1250 mm) track, when driving in bends and slopes had a tendency to flip. A wider track has helped to eliminate this disadvantage. The improved car received index GAZ-67, and after further modernization in 1944, he became known as the GAZ-67B. In fact, the latest version of machine is widespread. It was distinguished by an advantageous weight distribution on the axles, wide tires (a size of 7.00-16) developed cleats, quite high ground clearance (210 mm) and small overhangs front and rear. Taken together, these features increased the GAZ-67B was already good permeability, added traction qualities. The car could tow a trailer weighing 800 -1000 kg, confidently walked on the broken front road without the engine overheating (it was a radiator with six rows of cooling tubes instead of three, as in the “lorry”), a long time could move at the speed of pedestrians on a flat road speeds up to 90 km/h.
A considerable advantage of the GAZ-67B in front of the American “jeep” was the fact that the Soviet machine worked on the abundant varieties of oil and gasoline. For example, it was fuel with an octane rating of 64 or even 60, for “jeep” required premium gasoline with an octane rating of not lower than 70. 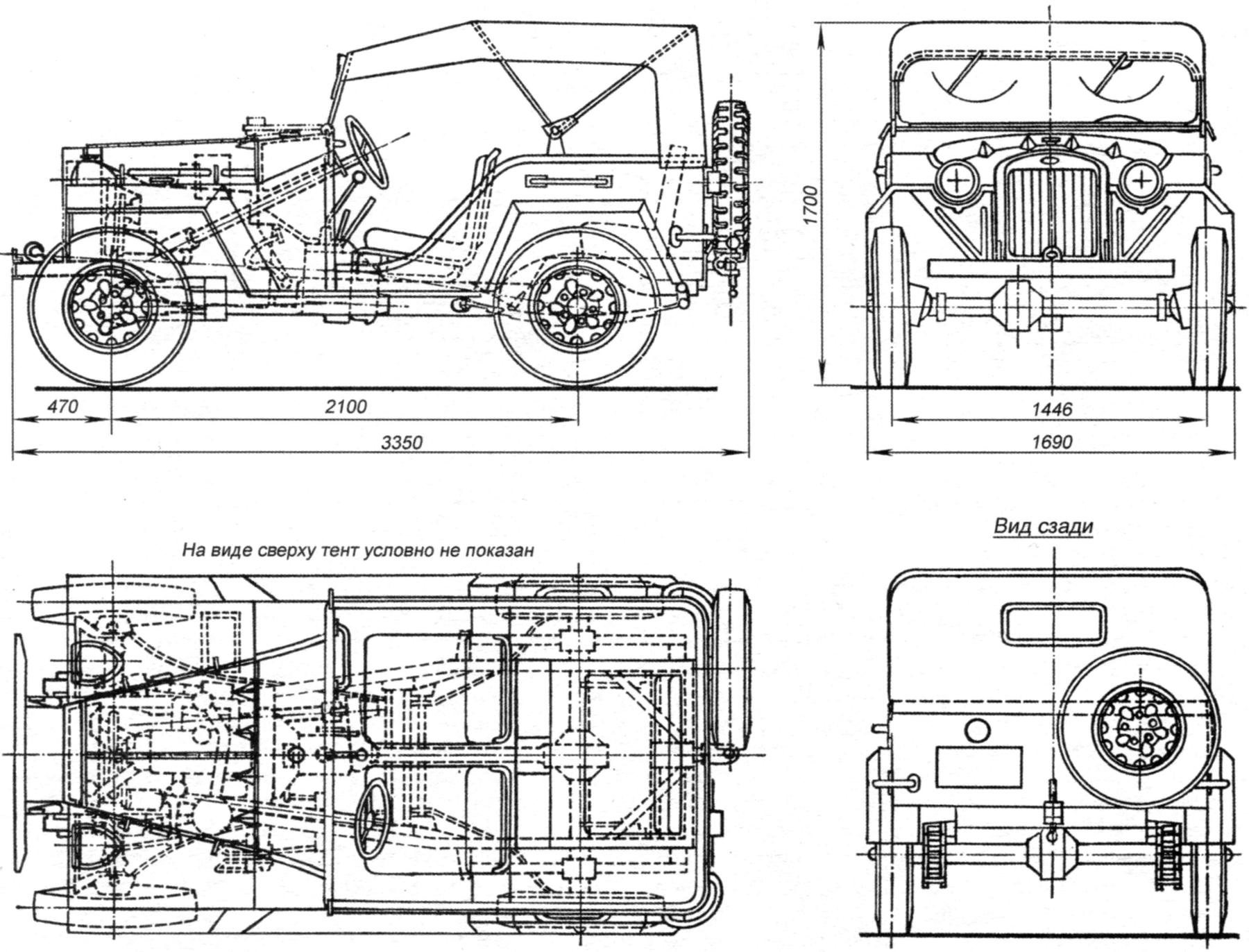 Chassis GAZ-64
The dimensions of the GAZ-67B was small: width 1650 mm, length 3350 mm. For comparison, recall that most small-sized domestic cars of yesteryear ZAZ-965 these dimensions, respectively, was equal to 3330 mm. 1395 and Not the last role in wartime, played a “small growth” of the machine: if you add up the awning and throw onto the hood of the windscreen, the height of the GAZ-67B was only 1.3 m, so it simplifies the masking.
On the basis of Soviet jeeps GAZ-64 and GAZ-67 during the war years produced double light armored cars BA-64 (late 1941) and BA-64B (autumn 1942). BA-64 had the same wide as the GAZ-67, rut. Later “saw the light” and floating car amphibious GAZ-011.
All these machines enjoyed a high reputation at the front and played an important role in the fighting. So the Nazis tried to “paralyze” their production, exposing the Gorky automobile plant bombing. Especially difficult was the summer of 1943, when from 4 June to 5 July (on the eve of the Kursk battle) the Germans had carried out 25 raids on the GAS. But neither destructions nor victims are unable to break the rhythm of factory routine, Thanks to the heroism of the factory team of the consequences of the bombing were eliminated in just 100 days (for comparison: in the usual time such work would take at least a year). And while it was recovering, the plant employees continued to work selflessly in the shops without roofs and Windows, working the whole light period of the day (the power plant was damaged and is not fully provided by current plant) – 18 – 19 hours. And the front had continuously received defense products, among which an important place was occupied by “jeeps” GAZ-67.
After the war, the GAZ-67B faithfully served geologists, agronomists, builders, but by 1953, obsolete, and had to be removed from production. Was replaced by a new model, GAZ-69, which was designed by the designers of the Gorky automobile plant under the leadership of N. G. Mozohina. But that’s another story.
CAR GAZ-67B
GAZ-67B outwardly quite simple and does not require detailed description – all seen from the drawing and photos. One has only to draw the attention of modelers on some of the details. Such as: okatovaya the body along the upper edge of the pipe, which is welded to the trim panel; vents on the hood; a folding frame of the windscreen; wheels with all-terrain tires have large tread pattern with “developed” grouser; roll forward and hook straps canvas aprons for closing the door openings; the towing device. Because the body open, it is necessary to show more detail on the model of its internal structure: the steering wheel, standing under a noticeable angle to the longitudinal plane of symmetry of the vehicle, additional (third) gear shift lever front wheel drive, seat on a tubular frame.
As was written in the instructions, “GAZ-675 can move on any drogam and on the ground.” This ensured the engine-driven all-wheel vehicle, the presence of 4-speed transmissions, small front and rear overhangs, high ground clearance, short wheel base and the tires developed cleats of the tread. Low tire pressure allows the car to move easily on loose and soft ground, sand, wisefixer for other vehicles. GAZ-67B was able to overcome fords depth to 0.7 m, steep ditches and ditches.
The comparative simplicity of the car encourages complicate the model showing the mechanisms, especially because they are, first, partly visible from under the body, and secondly, quite interesting. 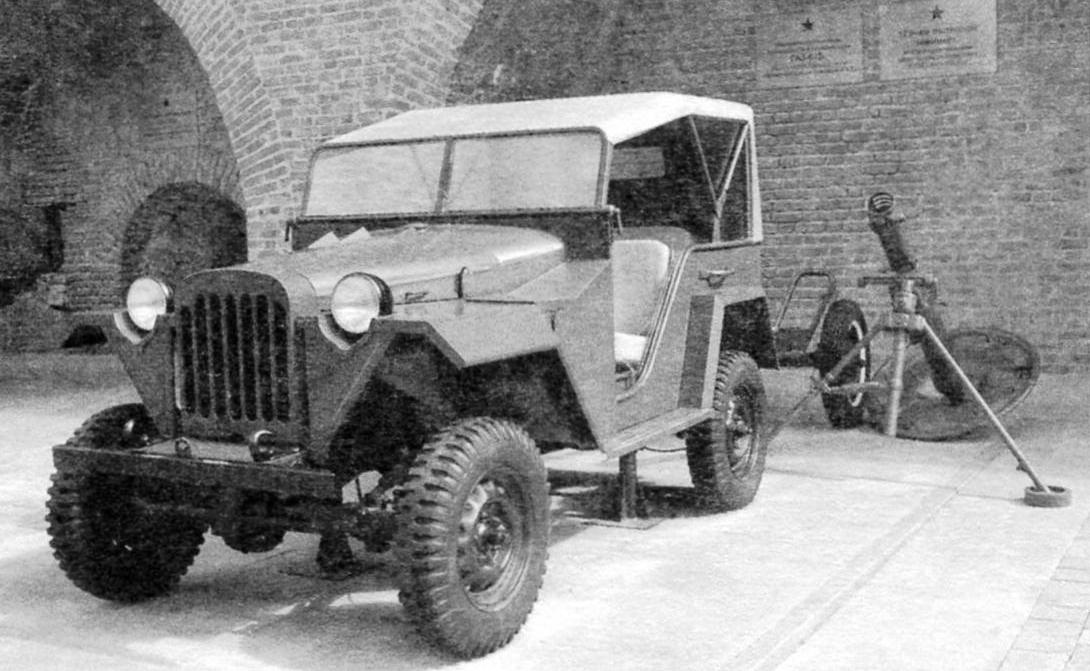 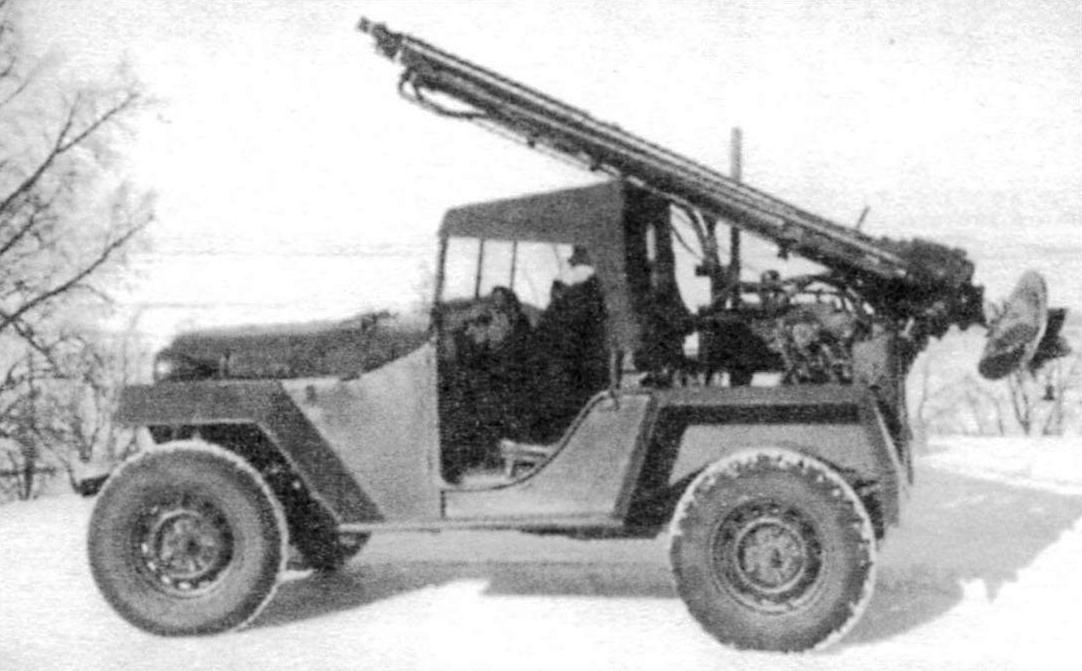 GAZ-67B peacetime: a chassis mounted drilling rig
Although the design of the vehicle used mechanisms previously manufactured cars GAZ-M1 and GAZ-61, it is supplemented by a wide range of original units, and all together they form a completely new car. The engine of the GAZ-M1 boosted, and its radiator is equipped with a 6-blade fan. The standard transmission attached to the transfer case, which moves the driveshaft of the front axle drive. The latter has special joints for torque transfer to the wheels at different angles (when turning), is suspended to the frame through four springs chetvertellipticheskih and well equipped with four hydraulic shock absorbers.
To give the look of a typical car GAZ-67B of the great Patriotic war should be fixed on the body (by the belt) on the left, a digging spade, on the right – a can of gasoline, and include the standard protective green color of the machine black camouflage spots (camouflage).
Yuri DOLMATOVSKY, L. SHUGUROV