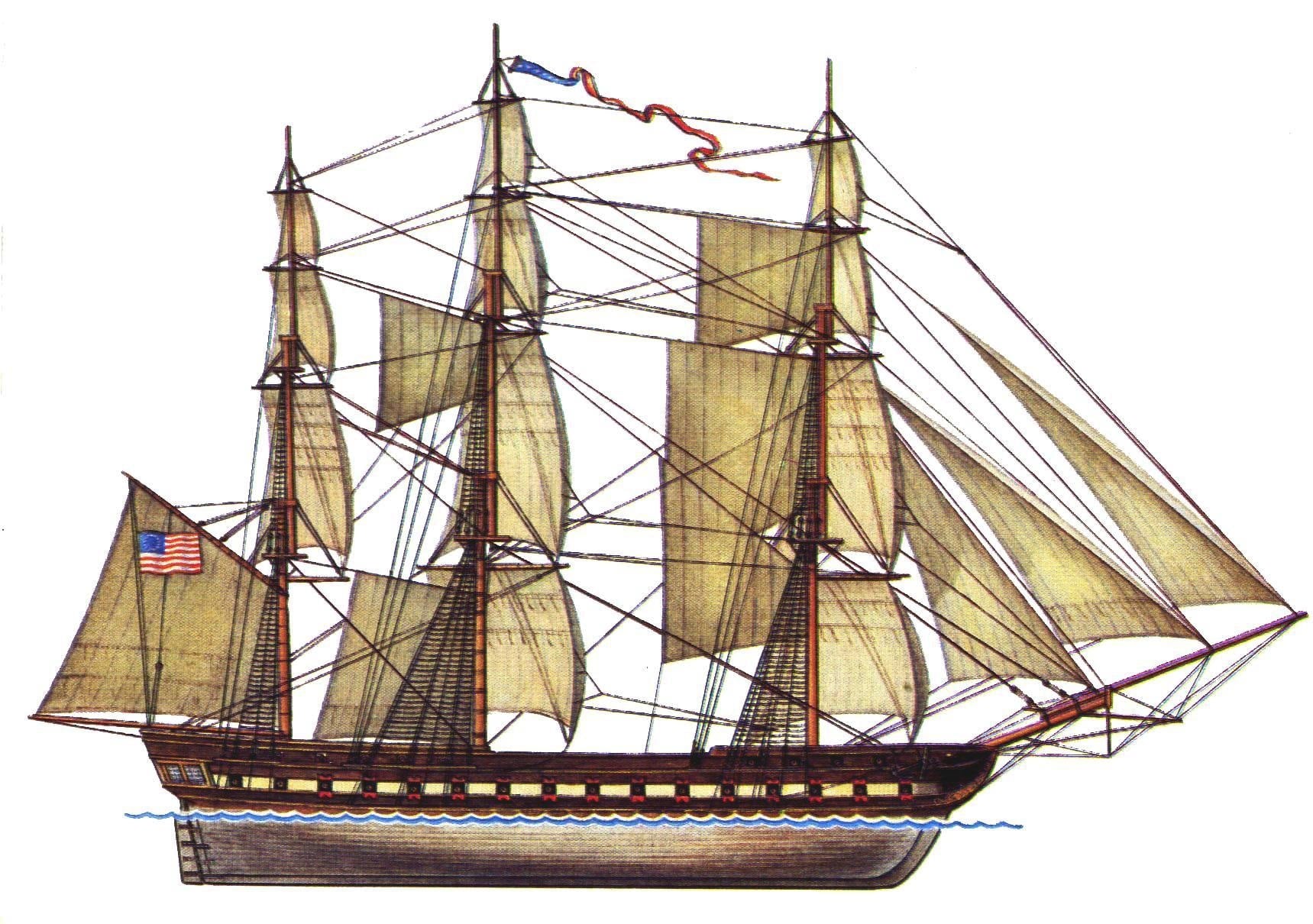 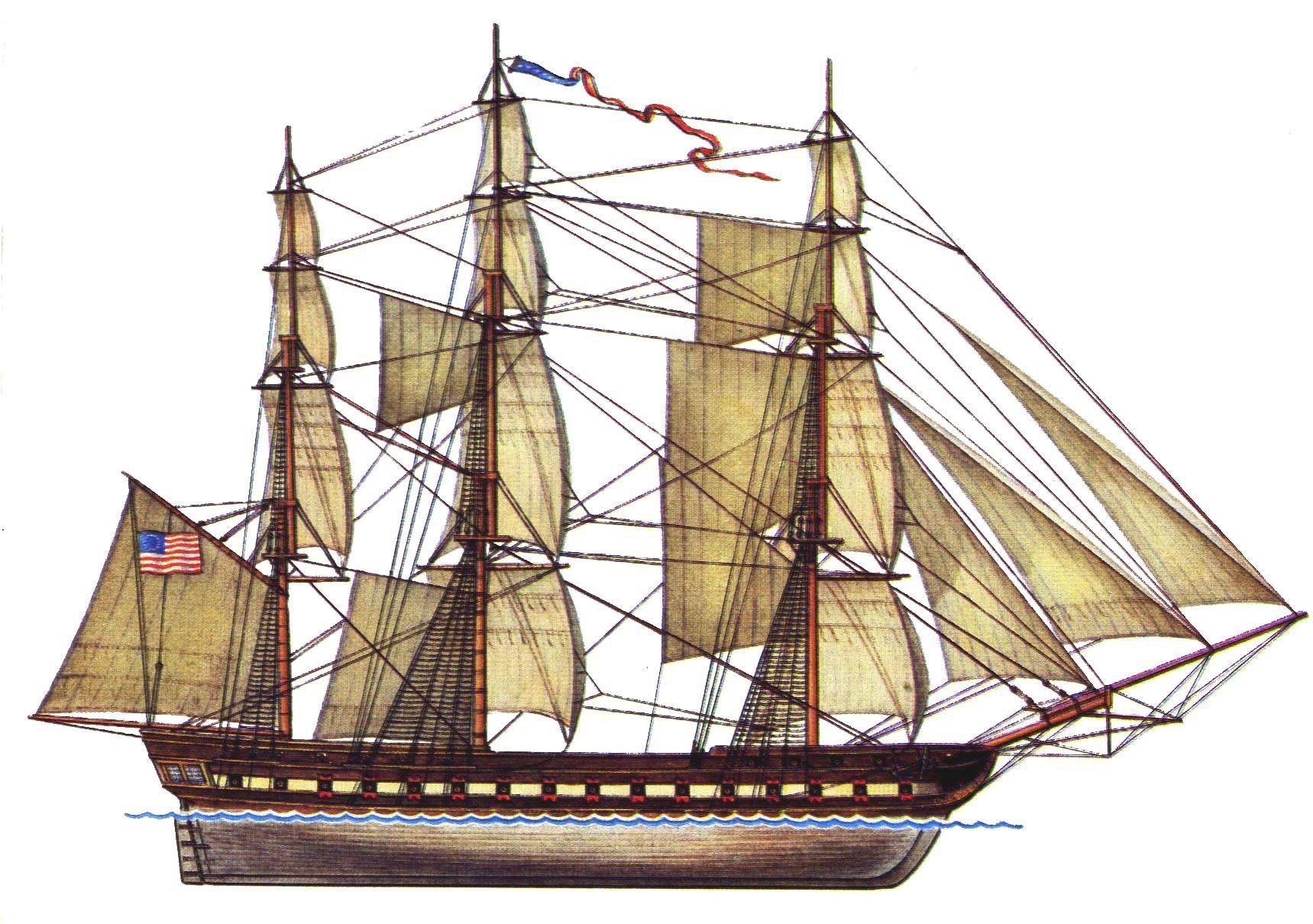 In the second half of the nineteenth century the fishermen of the Atlantic coast of France, and especially popular were the so-called “Icelandic” schooner — two-masted wooden vessels with increased width of the body and good seakeeping. Despite its modest size, they could make long voyages and endured serious storm. The peculiarity of their snap was that all the sails (including direct marceli) were placed and were removed directly from the deck, as the modern yacht is allowed to increase safety during inclement weather. On fishing schooners usually left to the shores of Iceland — from this came their name.
It is considered that the founder of a successful family sailing was the schooner “Occasion”, built in 1852. Later in her likeness began the mass construction of similar vessels; after 40 years, in one town Paimpol — “the fishing capital” of the province of Brittany — there were 80 “Icelandic” boats. More than eight decades, these small, graceful sailboats regularly supplied France Icelandic herring. Their era came to an end only in 1935, when the schooner “Glycin” made his last voyage to the waters of Iceland. Fishing sailing vessels gave way to steam and motor trawlers, to compete with which it was already beyond…
In 1931, coming down from the stage “Icelandic” schooner suddenly attracted the attention of the command of the French Navy. By the time two old wooden sailing ship— the battleship “Board” and the frigate “Melpomene” who served in the role of the stationary training ships, is completely dilapidated and needed replacement. Considering that sailing practice for future marine officers is essential, the Ministry of defense approved the construction of two training ships for the naval school in Brest in Northwest France. The order was placed at the shipyard “Chantiers naval de Normandie” in Fécamp. But as a prototype I chose the “Icelandic” schooner — a good construction, seaworthy and inexpensive in construction and operation. 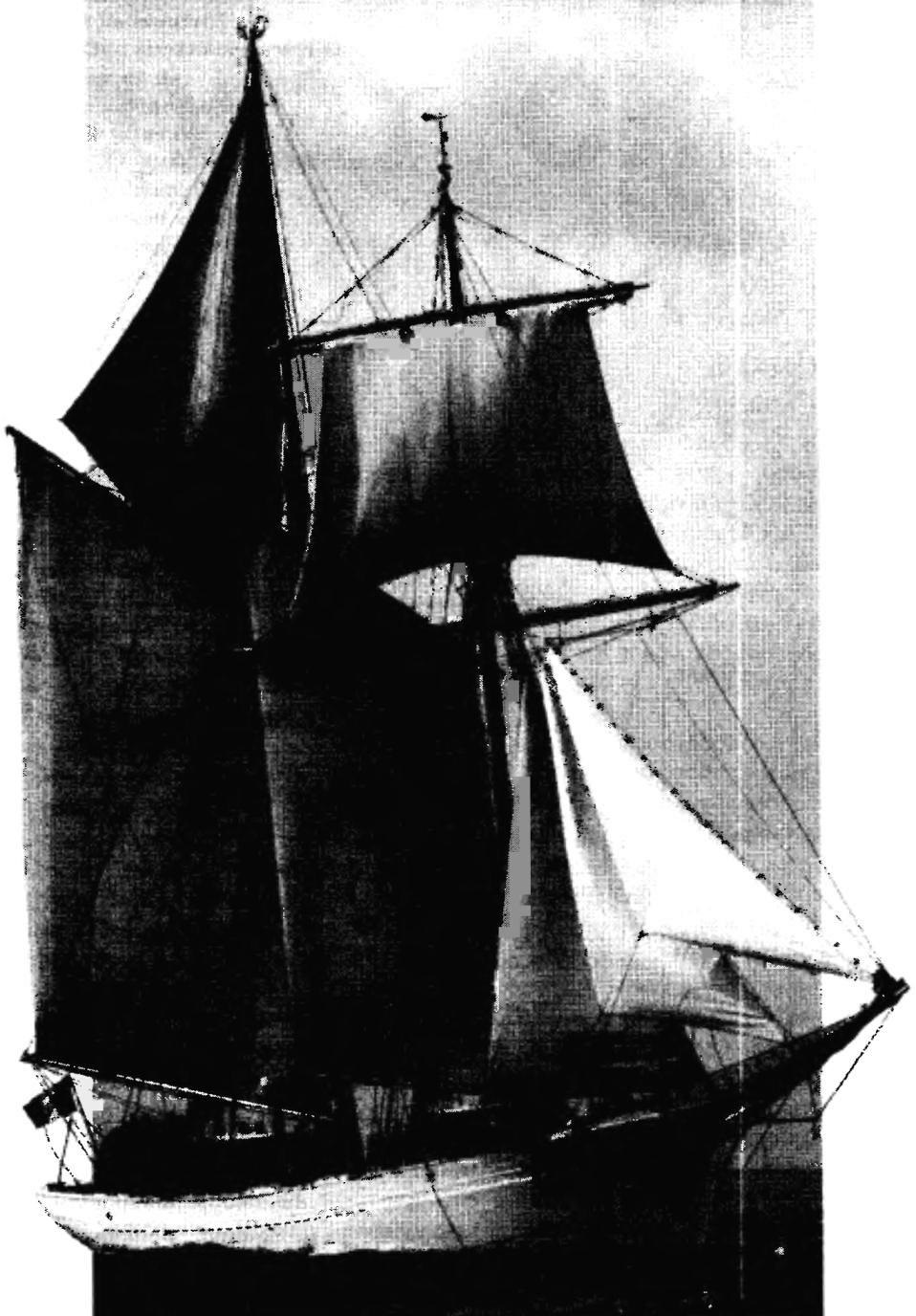 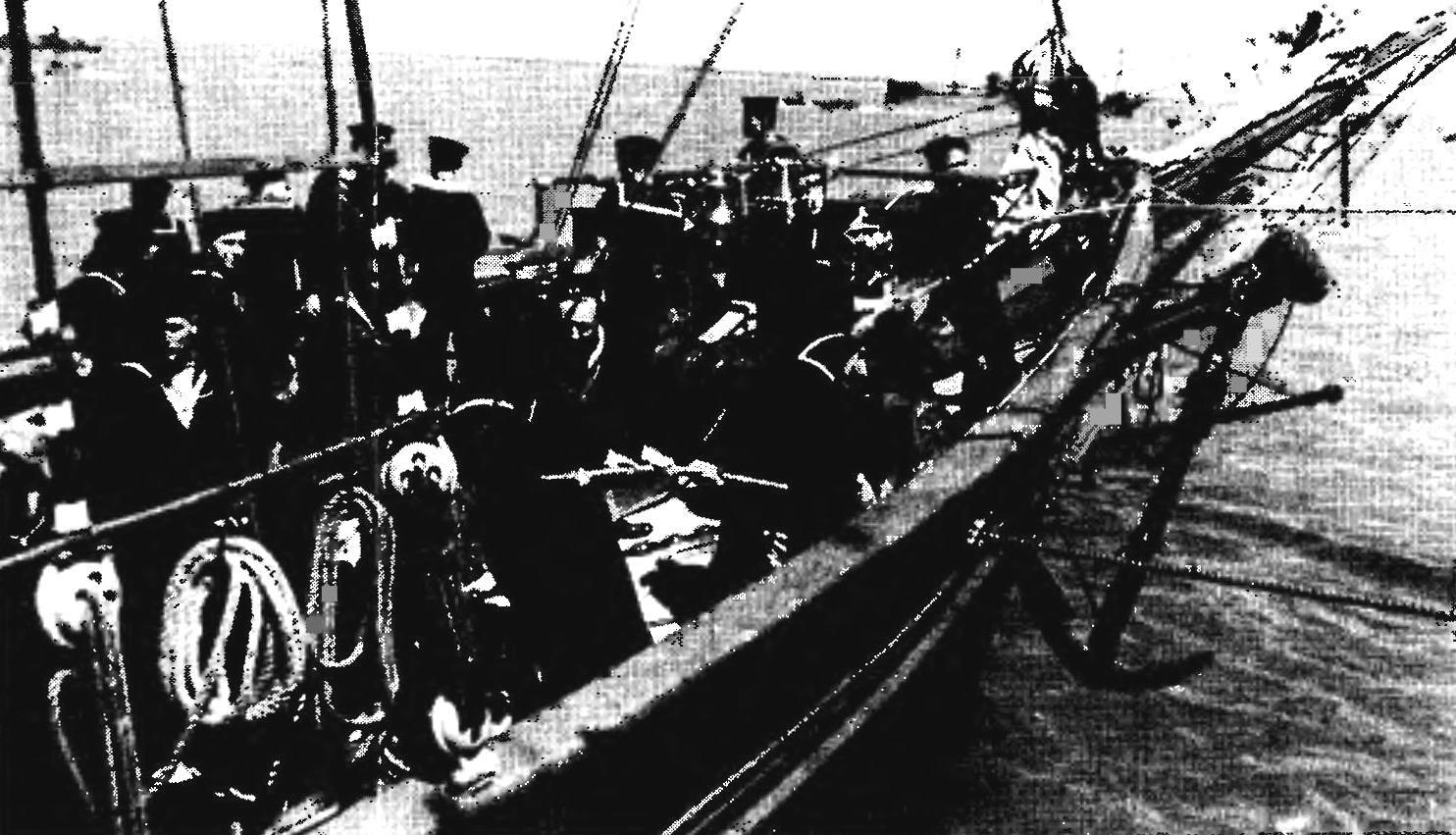 English sailors on Board the schooner “Belle Bullets” on the roads of Portsmouth, November, 1941 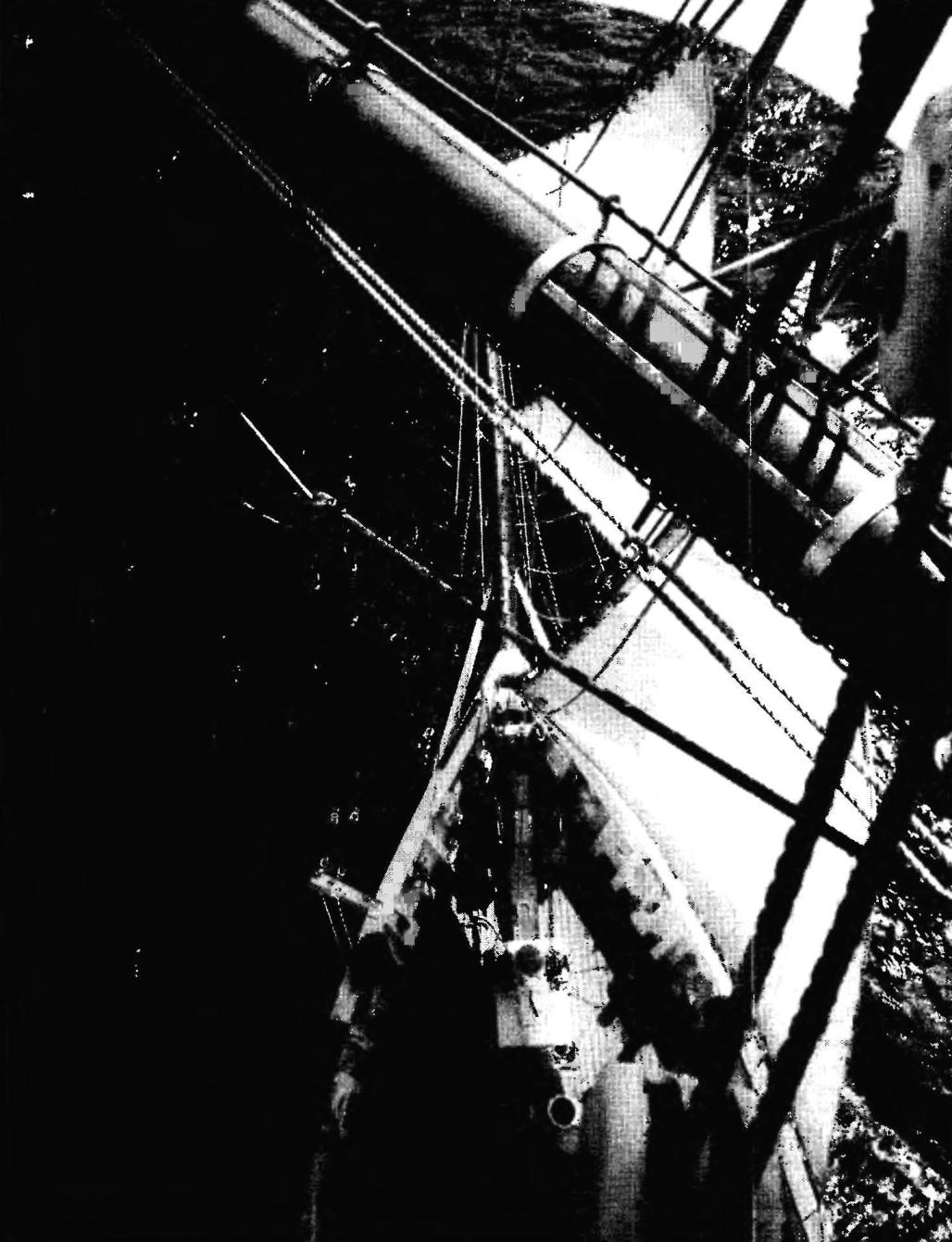 Schooner “Etoile”. View of the galley deck and superstructure 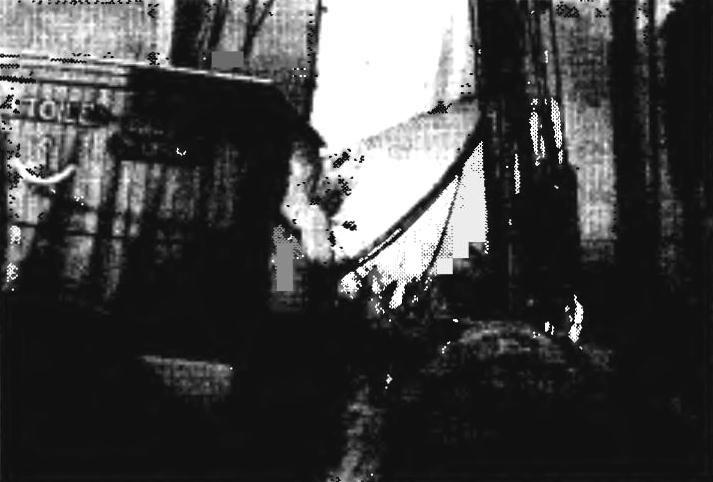 Schooner “Etoile”. View of the tank of for-Mars
Training ships were named “Belle of Bullets” (“Belle Poule”) and “Etual” (Etoile). The first name in translation may look quite strange: literally it means “the Beautiful chicken.” But in fact, it is more properly translated as “Beauty” — in the old days in France “beautiful chickens” referred to attractive women. In the Navy this name in my time wore three sailing frigate. The first of them, a 26-gun, distinguished himself during the war with England in 1778; the second, a 40-gun, in the era of the Napoleonic wars operated in the Indian ocean; the third, 60-gun, had served 60 years (1828 to 1888) and, in particular, remained in history as the ship that brought Napoleon’s remains from Saint Helena to France.
The name “Etoile” (“Star”) is also adorned on Board several predecessors. Among them are ship of the line party of the battle at Saint-Martin (1622); of flutes, soprovojdali Bougainville during his voyage around the world in 1767-1769, and the frigate, who fought against the British in 1813-1814.
The type of sailing snap “Belle Bullets” and “Etoile” refers to Marcellin the schooners. Rigging them exactly match what was used on the “Icelandic” schooner. The total area of all nine of the sails was equal to 425 sq. m.
Haveli had the opportunity to slide on the masts, and geeks with the help of chain mechanism can rotate around its axis, winding or unwinding the cloth sails. Marcel was attached not to the main, and underneath the auxiliary ray, is also able to wrap itself on the sail. Thus, the production and cleaning of sails was carried out without lifting the crew to the mast. However, for the deployment of oblique grotto area of 135 square meters required the joint efforts of at least 14 people.
Case both boats were wooden, the greatest length with the bowsprit was 37.5 m, waterline length is 25.3 m, width is 7.4 m and draught of 3.5 m Standard tonnage amounted to 215 tonnes, fully — 275 T. In contrast to the fishing ships, training ships were equipped with additional auxiliary diesel engine “Sulzer” 125 HP instead of the cargo hold was equipped with a cockpit to accommodate 30 cadets. The permanent crew consisted of 18 people.
The launching of the schooner “Belle of the Bullets” was held on February 8 and “Etual” — July 7, 1932. In September, they went to Brest and for the next seven years, until the outbreak of the Second world war, carried out regular training cruise with the cadets of marine schools. And in September 1939 the court got to joke — fire of the war Europe was NV to sailing practice.
17 June 1940, came to power Marshal Petain A. announced the conclusion of the armistice with Germany, effectively meant a complete surrender of France to Hitler. But many of the officers of the French fleet did not agree to voluntarily lay down their arms. Wishing to continue the fight the cadets and instructors of Maritime schools decided to flee to England, and the next day, “Belle Bullets” and “Etual” without orders left Brest June 19, they made it safely to Falmouth. Located in London, General Charles DV Gaulle welcomed the action of his countrymen, and soon founded the movement “Free France”. 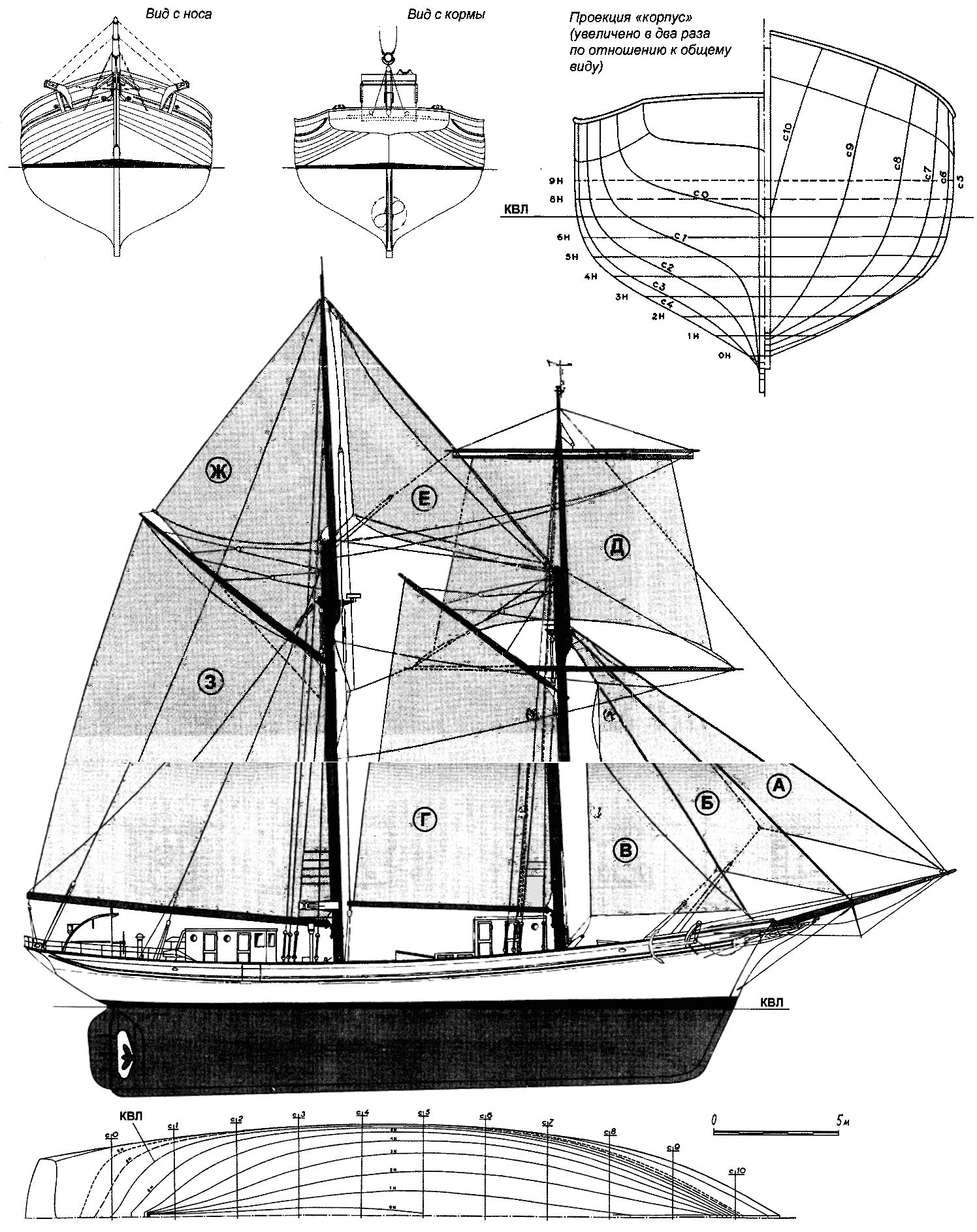 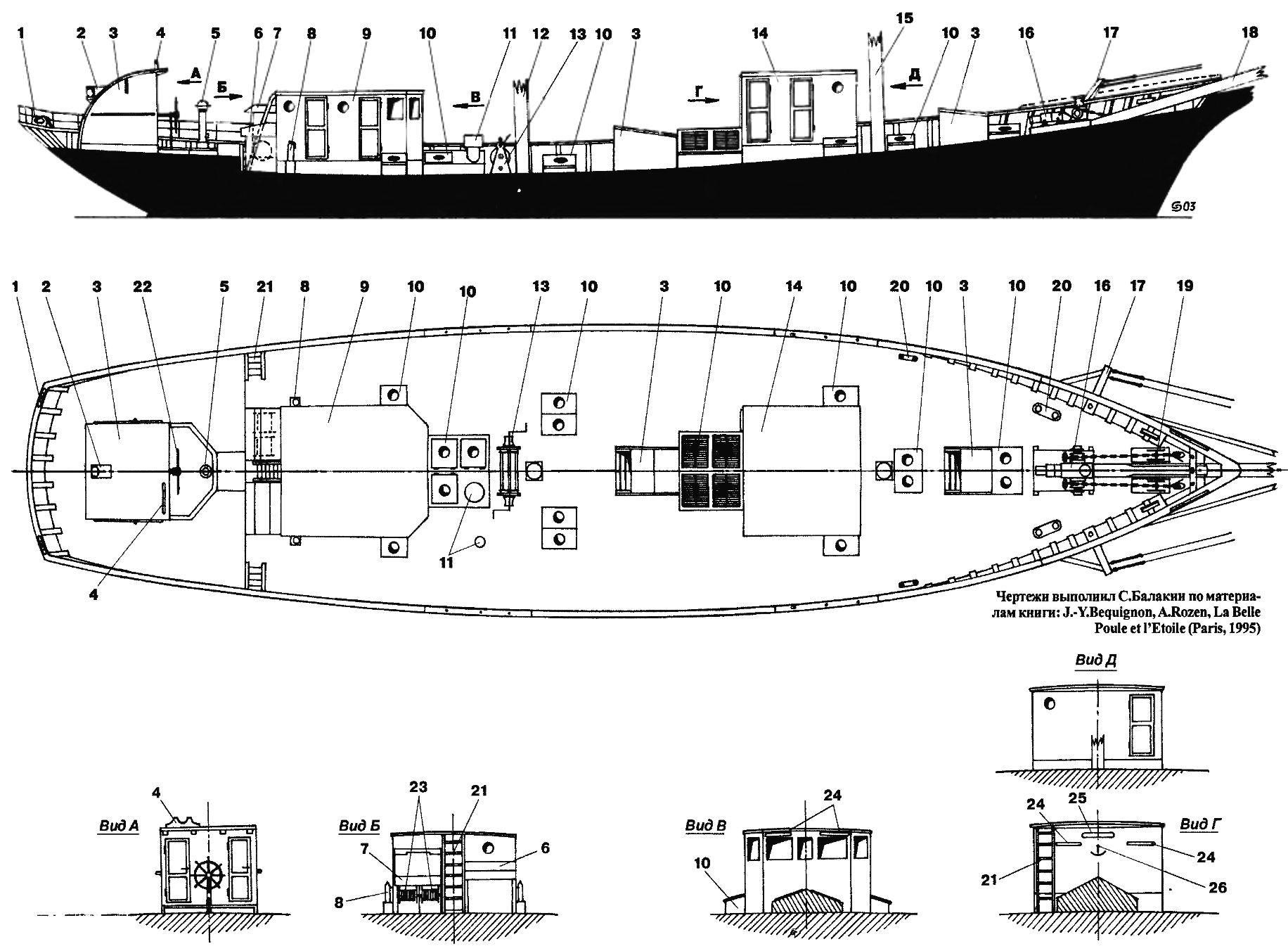 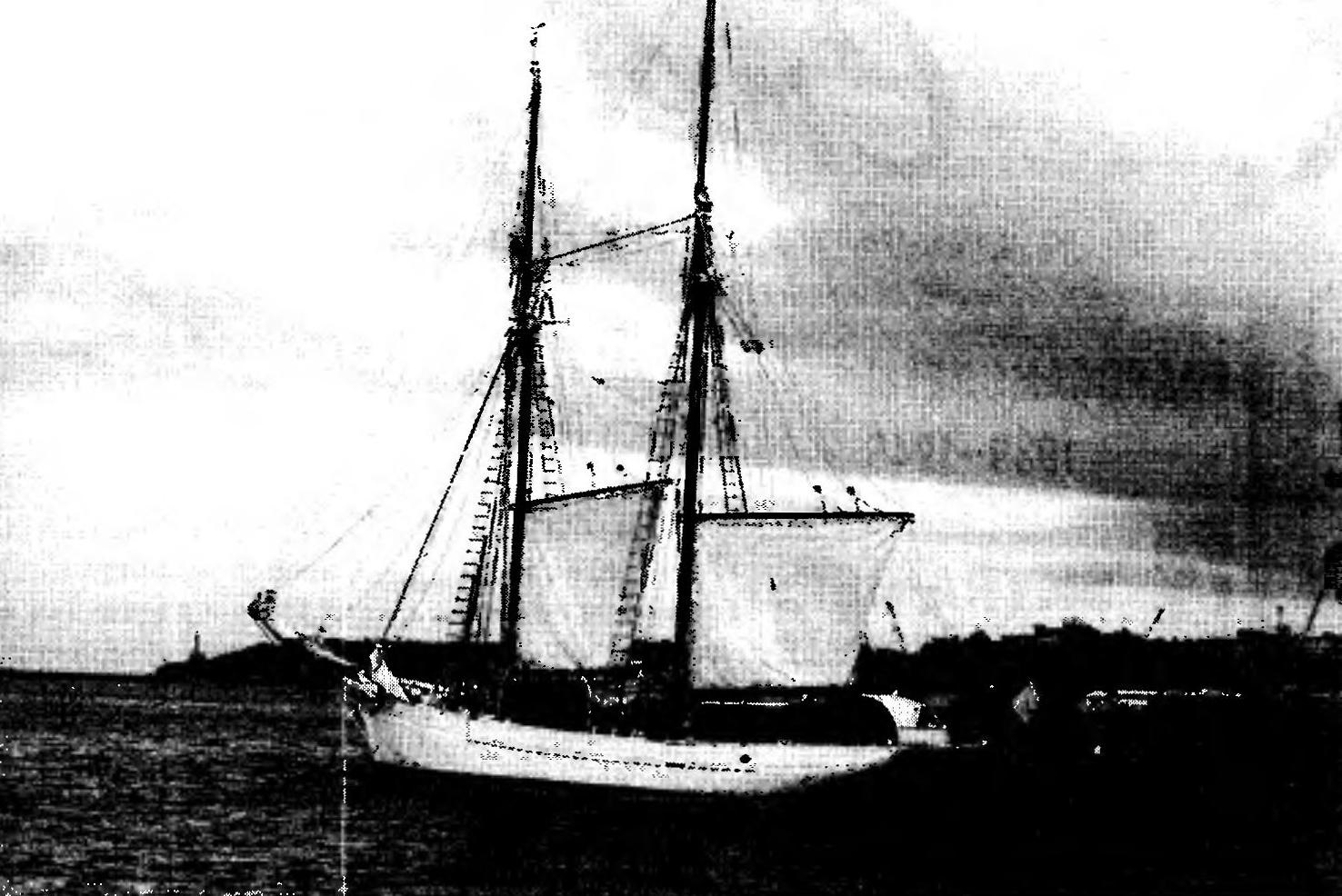 Setting sail on the schooner “Belle of Bullets.” 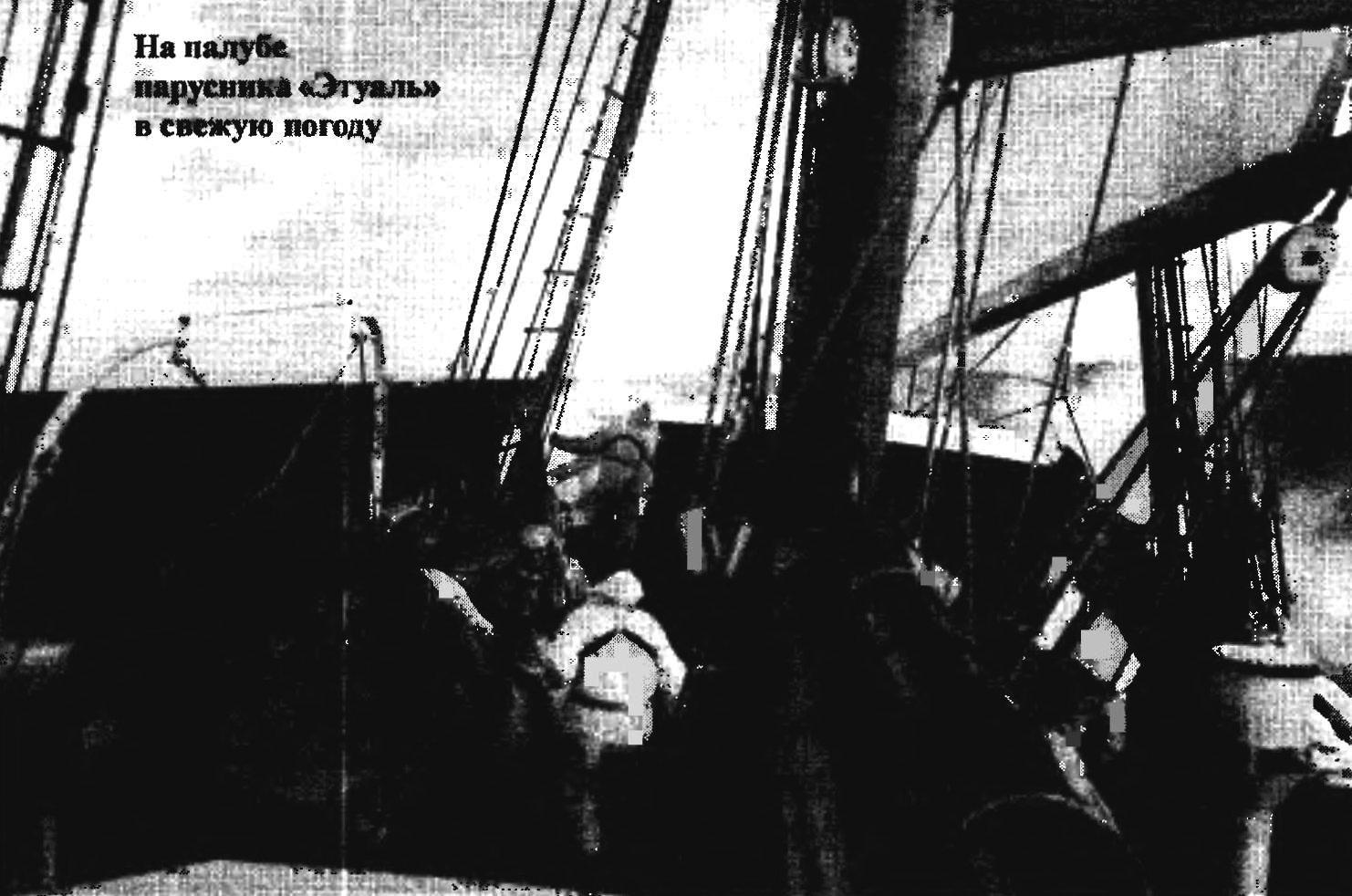 The next five years both sailboat spent in “exile”, continuing to be used for its intended purpose — to train future sailors of the French, and now English fleets. To do this, in November 1940 “Belle Bullets” and “l’etoile” was moved to Portsmouth, where he remained until 15 April 1944. Because of the threat of air raids on the schooners, there was even a armament, one 8-mm machine gun “Gocci”. In the spring of 1944, the ships made the long voyage around Britain in a clockwise direction and then through the Caledonian canal on the East coast. On may 13 they arrived in Hartlepool where it was laid up. Just the time spent on the Islands of the “Albion” schooner “Belle of Bullets” left astern 14 280 miles, and the “Etoile” — 10 046 miles.
In September 1945 the ships returned to France and soon resumed training flights with the cadets of the naval school in Brest. Since 1958, they actively participate in the international regattas “toll-thorns” (“tall ships”), held by the Association of training tall ship STA.
The miniaturization of the heirs of the “Icelandic” schooners did not become an obstacle for extremely long voyages. Over the past decade, “Belle Bullets” and “l’etoile” was in the North and Baltic seas, the Canary Islands, repeatedly crossed the Bay of Biscay and the Mediterranean sea. In 1994-1995, they were renovated and timberhouse (replacement of the wooden parts) and the body was again put into operation. Despite more than 70 years of age, elegant white sailing ships are ocean-going watch to this day.
* * *
For long life the appearance of the sailing vessel “Belle Bullets” and “Etual” have changed slightly. Manual windlass with time were replaced with electric, indoor galley eliminated one door, repeatedly improved rescue equipment (rafts and boats)… In the 1970-ies of the court was equipped with navigational radar stations; then the old diesels was replaced by a new 245-horsepower (the latter for the appearance of the schooners had no effect). And it is curious that all the alterations on both ships occurred synchronously, so that the “Belle of Bullets” and “Etoile” at all stages of their career from each other is a little different. They were not just sisterships and sisterships-twins.
Color. Freeboard, roof superstructures, coamings, bulwarks and zalingi (inside)— white; the underwater part of the hull and the base of the bulwarks (deck stringer) green; cleats, bale straps, anchors, chains and chain stoppers — black; mast, wall, add-ins, skylights, ladders and platforms ladders are similar—dark wood; deck flooring — light wood.
S. BALAKIN