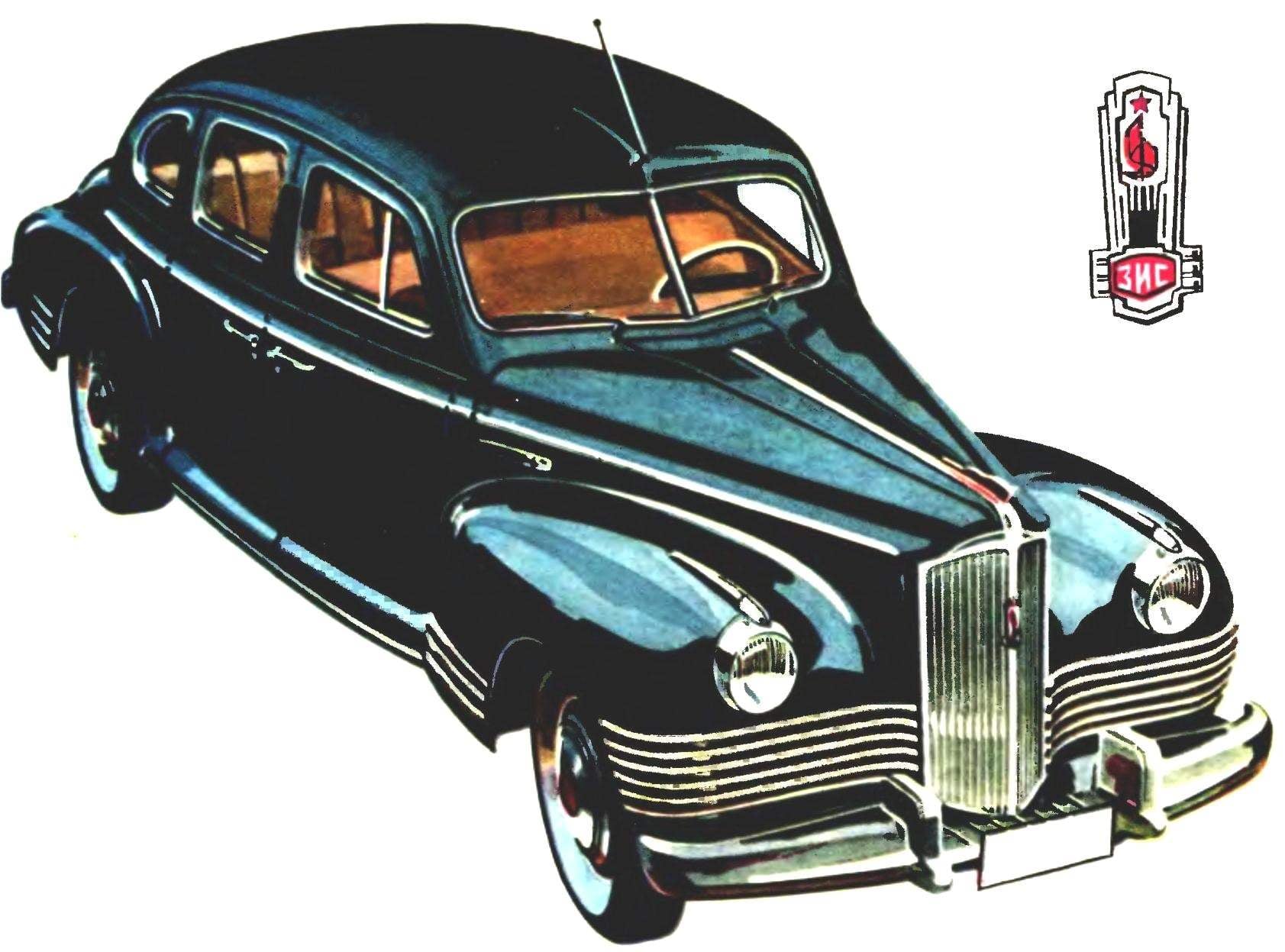 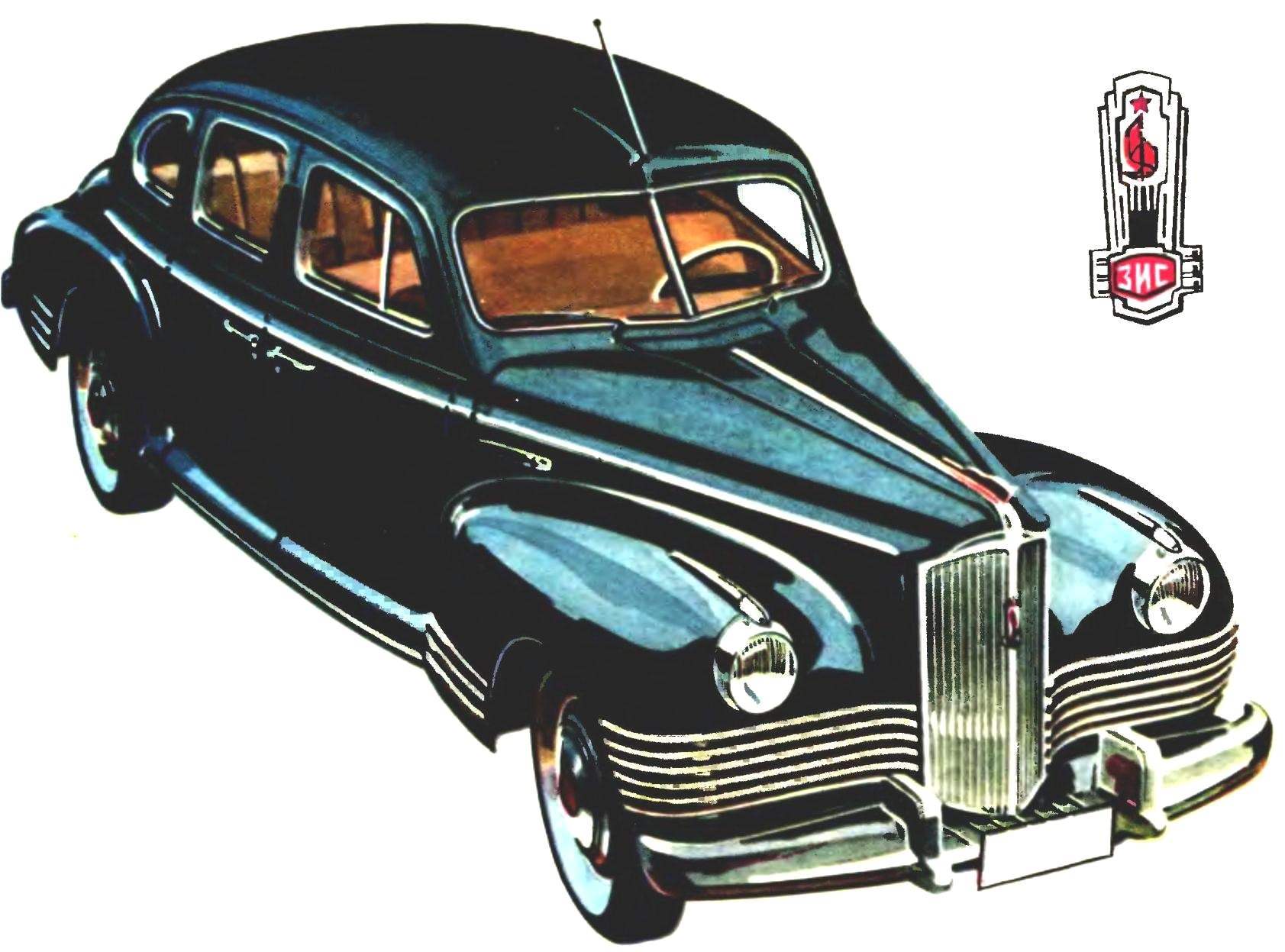 “We have mastered the car ZIS-110 the machine is very complicated. Besides the fact that it requires a high level of culture of manufacture, it requires great technical maturity.” These words were spoken 30 years ago at the factory party conference of I. A. Likhachev, Director of the automobile plant, which bears his name.

ZIS-110, “Executive” comfortable limousine really was the design, which took into account all the latest at the time of achievement of motor vehicles. This is the first new thing I learned was how our industry in the first year of peace. The design of the vehicle started in 1943, in the war. September 20, 1944, were approved by the government of samples of the car, and a year later, in August 1945, was already assembling the first batch. 10 months is incredibly short period, the plant performed the necessary drawings and developed the technology, prepared the necessary tooling and equipment. Just remember that when the plant in 1936 he mastered the production of cars ZIS-101, the preparation to the production took nearly a year and a half. It should be noted that all of the most challenging tooling — dies for the manufacture of body parts, frame rails, jigs for welding body parts were obtained from USA. For the ZIS-110 made their own.
The new machine has proved very successful. Durable, incredibly reliable car ZIS-110 at the same time was very comfortable, quiet and fast. Perhaps more accurately it can be described by the word “solid”. It was used for internal circuits of the higher state organizations, Soviet embassies in different countries. In addition, the ZIS-110 was used as the car of “Ambulance”, and as a taxi and in taxi parks it had the highest reputation.
The base model is actually the ZIS-110, the plant was equipped with closed-body four-door “limousine”. The backs of the front seats formed inside a thick jumper, connecting the Central pillar. From the cofferdam was nominated glass partition that separated the front from the back. In addition, in the niches of the jumpers were placed two additional jump seats (sometimes called strapontins), which allowed to increase the total number of seats in the car from five to seven. The ZIS-110 limousine produced from 1945 to 1958.
In addition to the basic model, the plant is commercially built two versions. ZIS-110A (1952-1957 years) were intended to work in “first aid”. External differences: a flashlight with a red cross badge over the windscreen, leans up a hatch in the rear of the body and the white color with the appropriate labels. Inside the car were sliding the stretcher, seats for medical staff, first aid kit.
Another version of the ZIS-110B (1949-1957 years) — was a car with an open body “Phaeton”. It differed from the basic folding fabric awning and pull-out frames with side glass.
Such a body, despite the light tent, the equipment being harder and harder limousine (ZIS-110B weighed 55 pounds more than the ZIS-110).
Like many other cars ZIS-110 had an integral body and was equipped with a powerful frame with X-shaped crossmember. The latest managed to gain significant torsional stiffness, which in turn ensured good drivability. When the length of the machine is not more than 5 m (and ZIS-110, it was 6 m) and the bearing body has a high torsional stiffness; in the greater length to achieve the desired stiffness, it is necessary to enter in the design of various amplifiers: scarves, bulkheads, braces. Eventually they nullify the gain in weight, which has a car with a monocoque body compared to a car equipped with a frame. 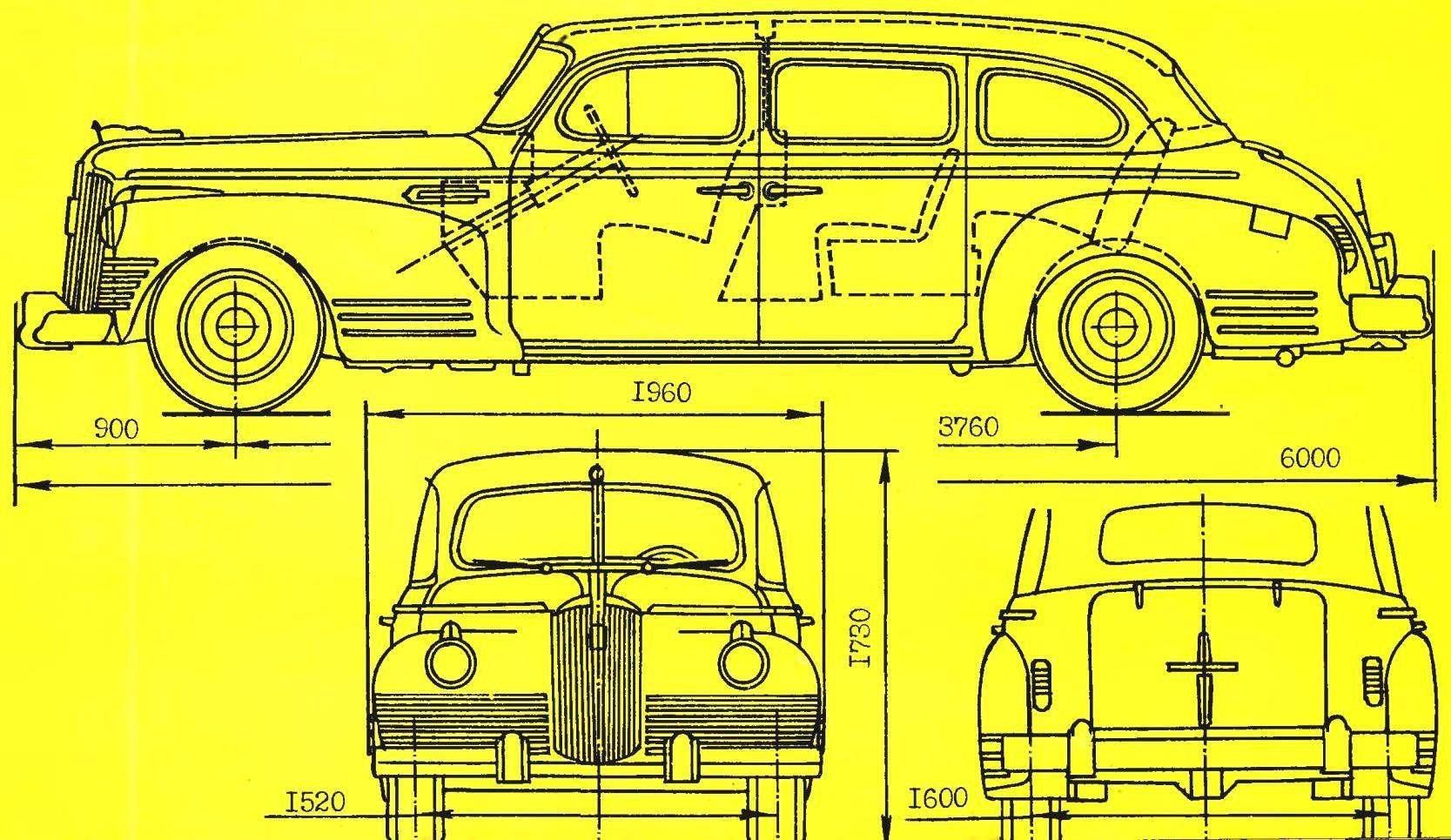 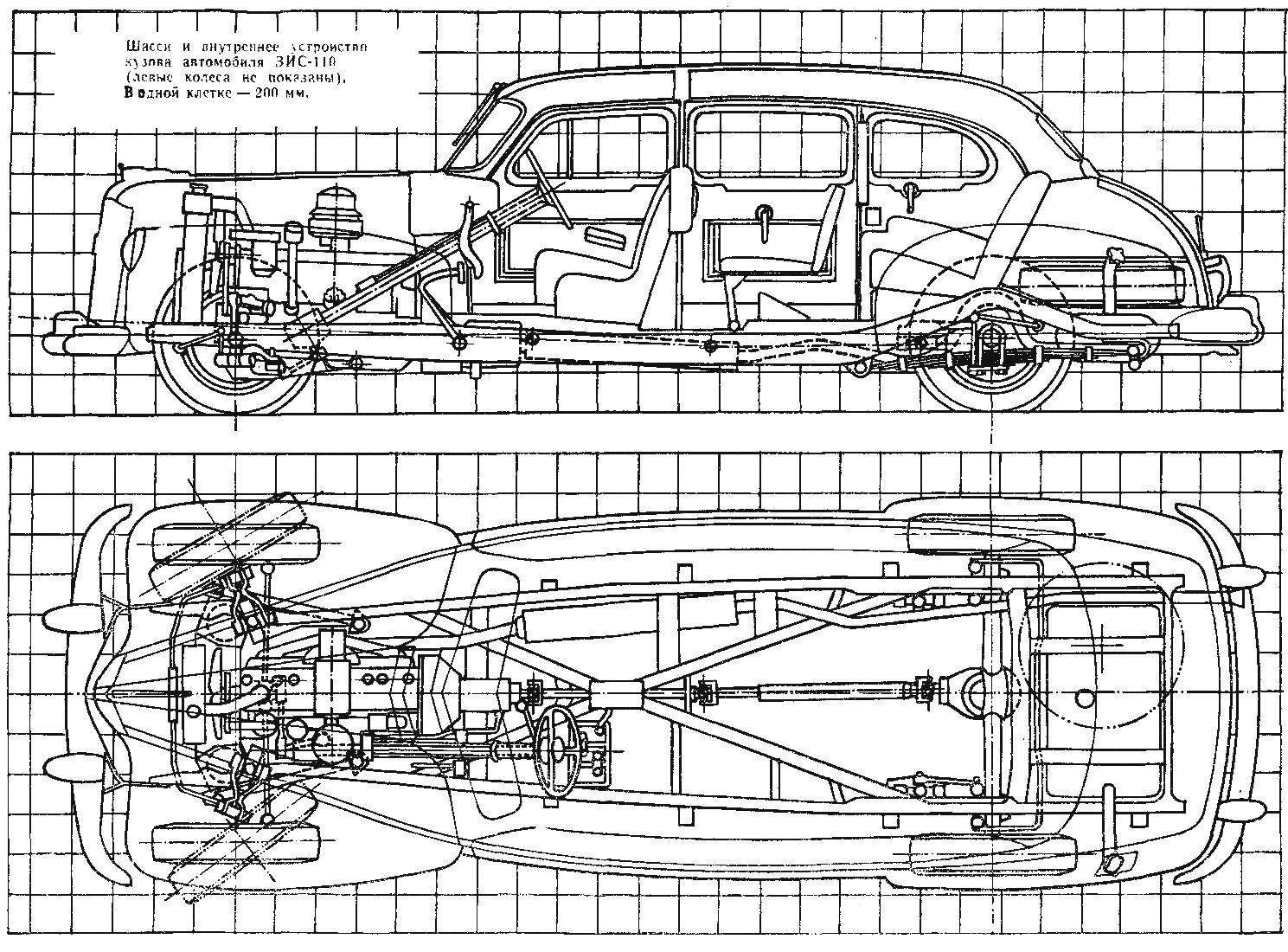 The chassis and internal structure of the car body ZIS-110 (the left wheel not shown). In the same cell is 200 mm.
What structurally was interesting, the ZIS-110? First of all, the use of various technical innovations. Among them, it should be noted hypoid main transmission rear axle, which is widely used today in passenger cars. In this program the leading axle bevel gear is shifted down (from the ZIS-110 44.4 mm), and the gears revolve with the slide, not with a rolling of the teeth, which require special extreme pressure lubricants. It is a kind of hybrid between bevel and worm gearing. Hypoid gears operate more quietly than conventional conical with spiral tooth, but inferior to them in efficiency. Selecting the offset pinion, the designer is not only looking for a compromise between quiet operation and low efficiency, but also the plans due to this offset to lower the propeller shaft and thus to get rid of the speaker above the floor of the tunnel. So, the ZIS-110 floors in the interior of the body is absolutely smooth.
The designers of the ZIS-110 was first used in the domestic automotive industry independent suspension front wheels, hydraulic brakes, gear lever, on the steering column, install the stabilizer bar front and rear suspension. Today all these constructive decisions for us everyday, the usual, but then a team of designers showed technical vision and bravely went to innovations.
Not only in chassis, but in the back we will find unusual at the time nodes. This is a silently operating hydraulic lifters.
In door timber door button included the supply of current to the solenoid which operated a valve controlling flow of a fluid in the cylinder window. The original headlights of this car. Filament, reflector and glass are joined together in a single sealed knot, known today as “headlamps”.
Very interesting engine components, in particular gas distribution mechanism. Here was first used the hydraulic lifters. This pusher was a cylinder with a plunger. In the space between them from lubricating system is supplied under pressure from oil. The clearance between the valve and the pusher is constantly compensated by the flow of oil, thereby exclude the noise in the valve mechanism and the need for adjustments.
Another curious feature is the drive of the Cam shaft silent plate (nine rows of toothed plates) Morse chain. In 1913 cars of Russian-Baltic shipyard (model E15/35) was placed this circuit. But it was purchased in England. For the ZIS-110, the plant mastered the production of these precision parts.
The unusual size and had the spark plugs — they are a thread made of 10 mm that had never met before to the Soviet car.
The ZIS-110 was first applied to a sealed cooling system. And another interesting detail. In the top tank of the radiator is the thermostat, which automatically opened or closed the blinds, accelerating warming-up or adjusting the cooling of the engine.
Actually the engine ZIS-110 in its way special. So, in the working volume (cm3 6002) it was the largest domestic automotive engines. Working with high-compression (6,85), this engine required a special fuel with an octane rating of 74 (today, many trucks rituda gasoline And-76). Regarded as the very high quality aviation gasoline B-70 was unsuitable. It ZIS-110 was got worse and was given about 3-4 HP of power. As a result, the oil refining industry had to master the production of new grades of gasoline And 74 in addition to the popular A-66.
The engine was very “flexible” characteristic, and therefore the car used gearbox with three stages. From 1945 to 1950 ZIS-110 among all of the Soviet cars had the most powerful (140 HP at 3600 rpm) engine. Only with the advent of 1950, the first trucks of the yaz-210 with a 165-horsepower diesel engine he lost the palm.
For the creation of this model, the team of designers of the plant A. N. Ostrovtsev, B. M. Fitterman, L. N. Gusev, A. P. Siegel in June 1946 he was awarded the State prize.
When the streets of our cities appeared first ZIS-110, they consistently attracted the attention of the harmony of their lines, elegant finish. The car looked elegant and strictly ceremonial. Quite high (in growth medium) and raised above the road (ground clearance — 200 mm), it does not give the impression of a massive, heavy. Known role played tires with sidewalls – white rubber. The white ring does not touch the pavement, making the tire less massive. Long chrome lining along the waist line, the body sills, and on the wings lengthened the car, rarefied large amounts of the body.
Until the last few days of the release of our post-war first-born did not know of the competition in terms of ride, comfort, quietness. Perhaps the only sound that betrayed the movement of this machine on the road, there was a rustle of tires.
Front view of the front suspension and the right wheel with a partial schematic sections. 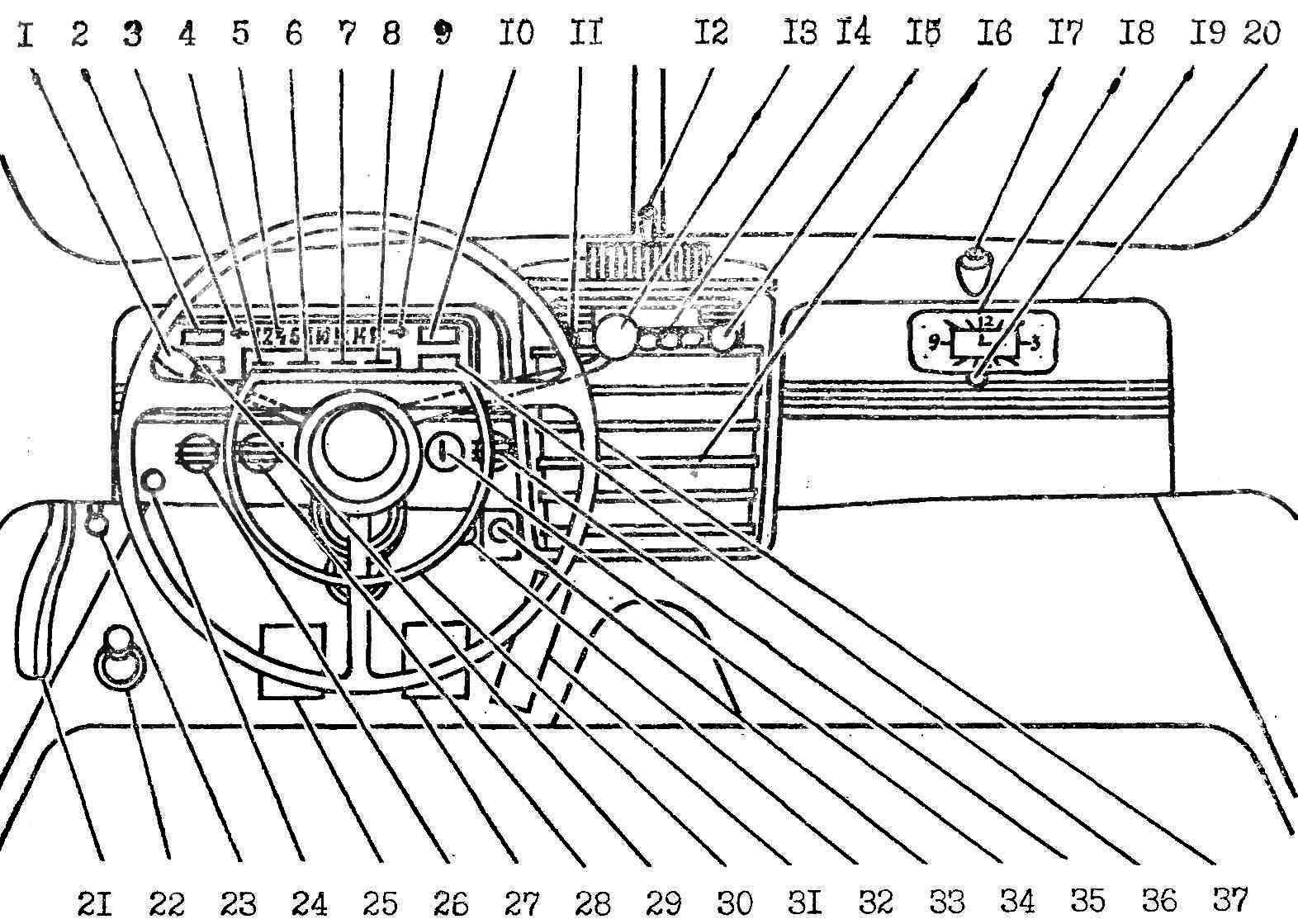