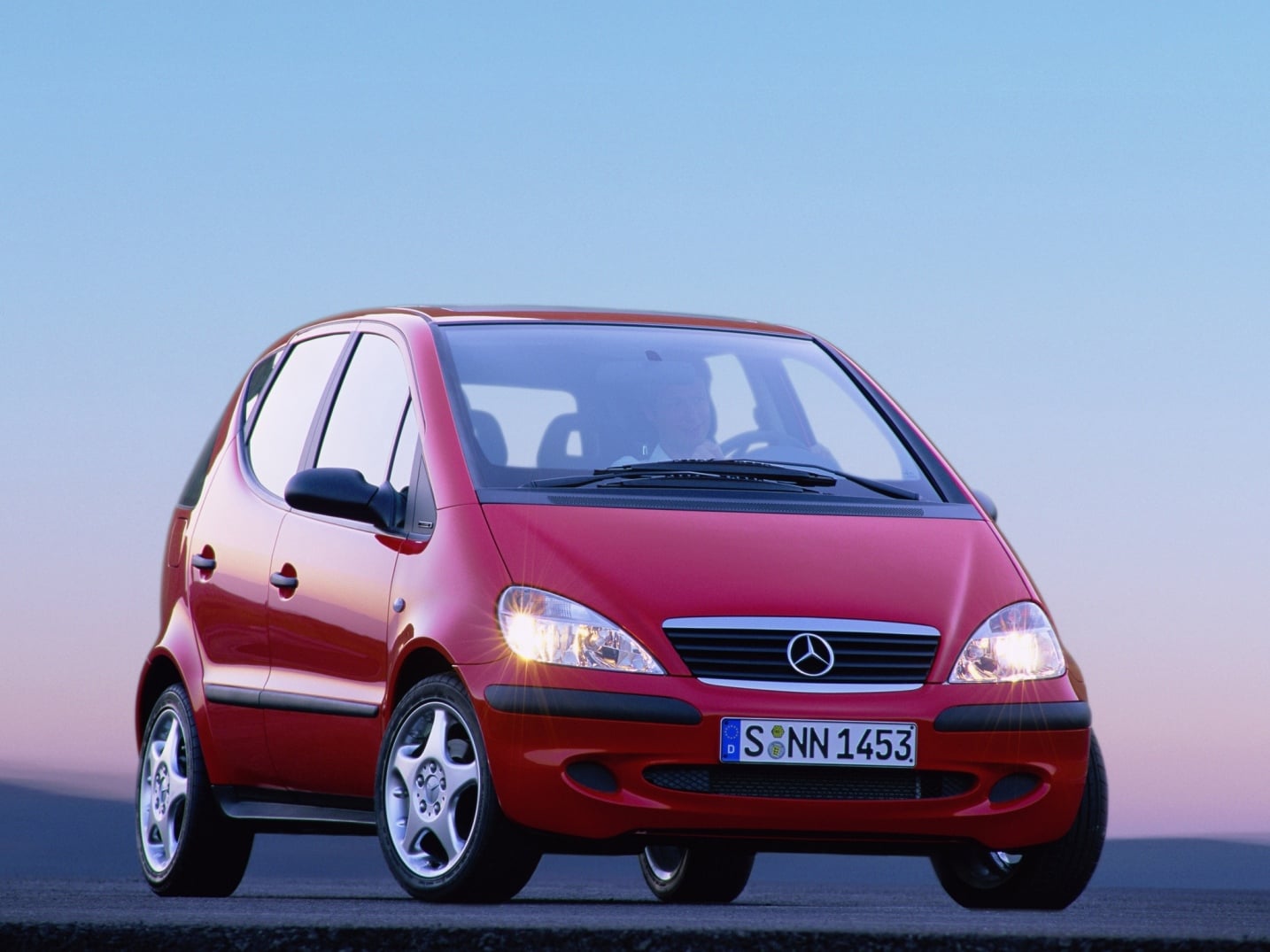 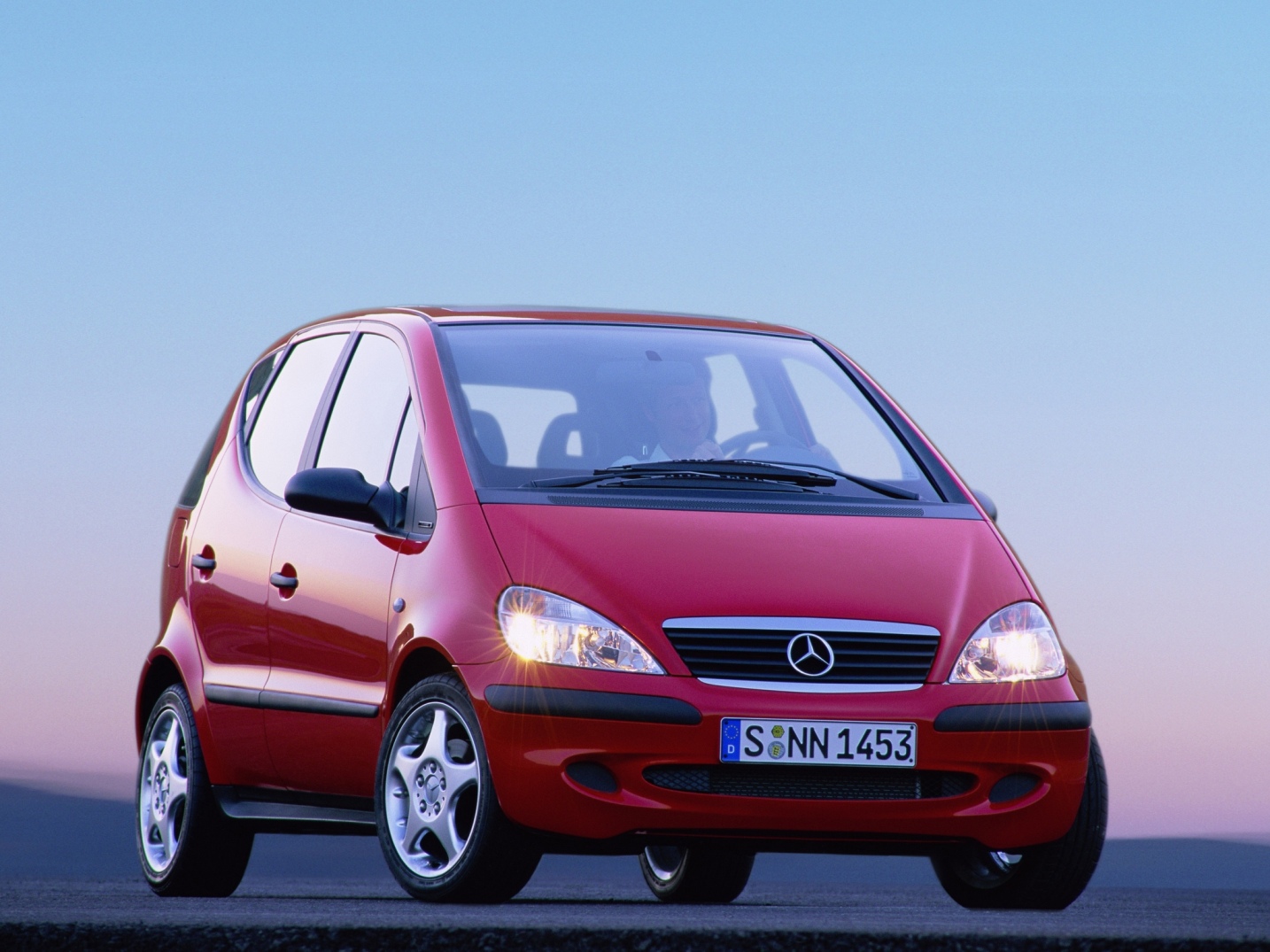 Compact MERCEDES-BENZ A-class. Rumors about the creation of the Mercedes-Benz fancy car of a Golf class began circulating in the automotive press in the early 90-ies of the last century. The excitement was easy to explain: compact cars, small class firm produced, except that in the distant 30-ies — it was the family car MERCEDES-130 with a 26-strong engine working volume of 1.3 L.

Okaloacoochee expectations of the public were met in full: the new compact car MERCEDES-BENZ A 140 with a three-beam star on the grille has become one of the most exotic cars of firm Mercedes-Benz. This vehicle is not suitable for their data to any of the classes and has accumulated as signs of a hatchback and minivan different from the cars of the famous German company not only the original appearance, almost did not have brand “Mercedes” damn, but the main — a very unusual layout. Looking ahead, we note that “a hundred fortieth” was destined to become the ancestor of a whole number of new passenger cars.
The designers of the firm were tasked with creating a rather unusual vehicle — full size, safe, comfortable and at the same time ultra-compact. Preliminary studies have shown that the solution of this problem is possible only with the development of a completely new concept of the body, the main criterion of which will be security concerns.
Almost up to the present time compact cars were considered the cars, to put it mildly, second — class citizens- it was cars with small engines, with little comfort and minimal security. Their merits were only small dimensions and low fuel consumption. But by the end of the century the situation began to change gradually: there appeared more and more comfortable urban mini-car that can compete with full sized cars. However, in order to produce a compact vehicle, it was necessary to find fundamentally new design decision. And this step has been accomplished by the engineers at Mercedes.
As a result of research and experiments came the “sandwich” principle, which allowed the contradictions between the relatively small sizes of the vehicle system and safety of passengers, which has always been inherent in the famous car company.
Short front part of the machine and, accordingly, a small crumple zone in the event of a frontal collision forced the designers to design the platform of the car in the form of a rigid three-dimensional “sandwich”, placing the engine and transmission partly in front and under the car body. In a frontal collision, these massive and rigid aggregates do not penetrate to the interior and do not harm the passengers, and moves down, under the bottom of the passenger capsule. It should be noted that, without such directed removal of power units from the area of deformation of the front of the car would have to make a 250 mm long — only in this case it was possible to provide passengers with the same level of security.
The first experimental model of the A-class was unveiled in 1993 at the International motor fair. The car became the main sensation; a significant proportion of visitors expressed a wish to run an unusual vehicle in serial production. 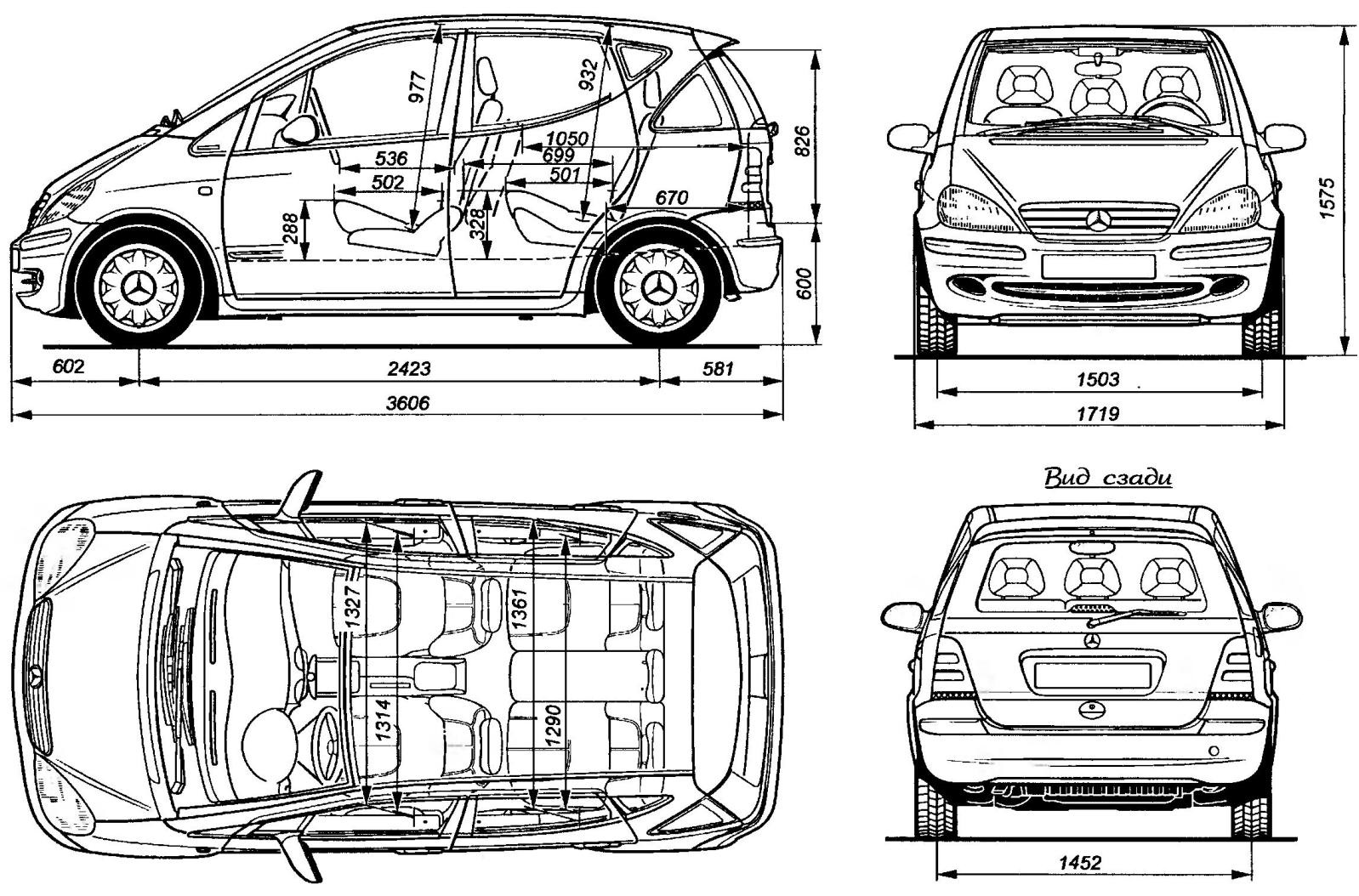 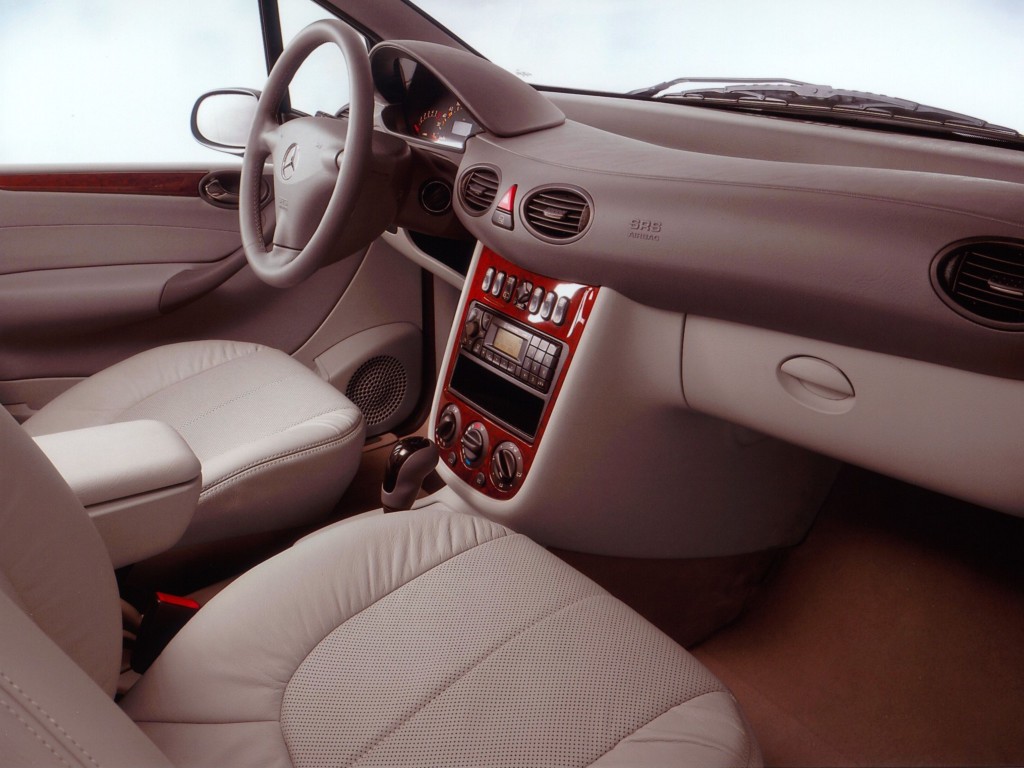 The interior of the MERCEDES-BENZ A 140
Serial model of the new machine, called the MERCEDES-BENZ A140, was shown to the public at the Geneva motor show in March 1997. The super-compact car with a total length of 3570 mm, equipped with quite comfortable and spacious interior, the exemplary safety system, became a leader among the “classmates”, combining advanced technology and quality.
MERCEDES-BENZ A140 is a front wheel drive car with a transversely mounted power unit, combined into a single unit with the transmission. The engine is tilted forward from the vertical at 59 degrees and is located somewhat behind the front axle. The same angle is installed and the engine shield compartment. In the engine compartment is the fuel tank capacity 54 L. Front impact with this arrangement, the units causes the crumpling of the front end of the machine, and the motor units go under the floor of the car, and not in its interior.
Front suspension And 140 — type McPherson, rear — trailing arms connected to the torsion beam. Steering gear — type “gear-rack” (the vehicle turning radius of 5.15 m). Front disc brakes, rear — drum.
A good design of the MERCEDES-BENZ A 140 allowed a machine to a very spacious interior length 1830 mm longer than the MERCEDES C-class, which is longer than the “baby” of 900 mm.
The buyer could choose a car with one of two petrol engines capacity of 82 HP and 102 or with one of two turbodiesels capacity of 60 and 90 HP Maximum fuel consumption with any of the gasoline engines is approximately 7 l/100 km, diesel is about 5 l/100 km.
The maximum speed of the new machine, depending on the power of its engine is 170 km/h, acceleration to 100 km/h — 12.9 to 15.1 p.
In the fall of 1997 MERCEDES-BENZ A140 could not stand the so-called “elk test”, which is a quick rebuild with the return on the lane, simulating a detour suddenly left on a narrow road a moose. 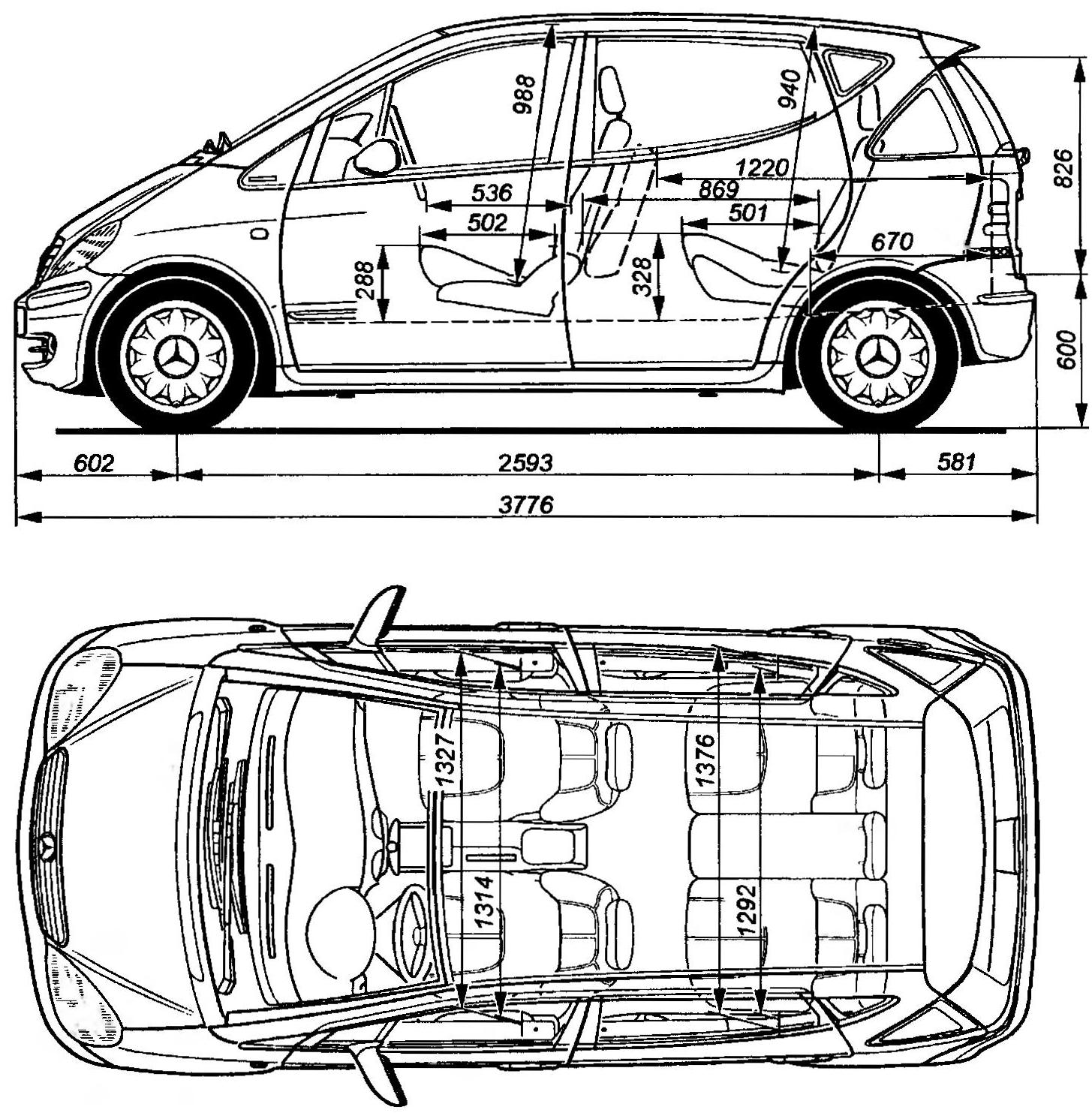 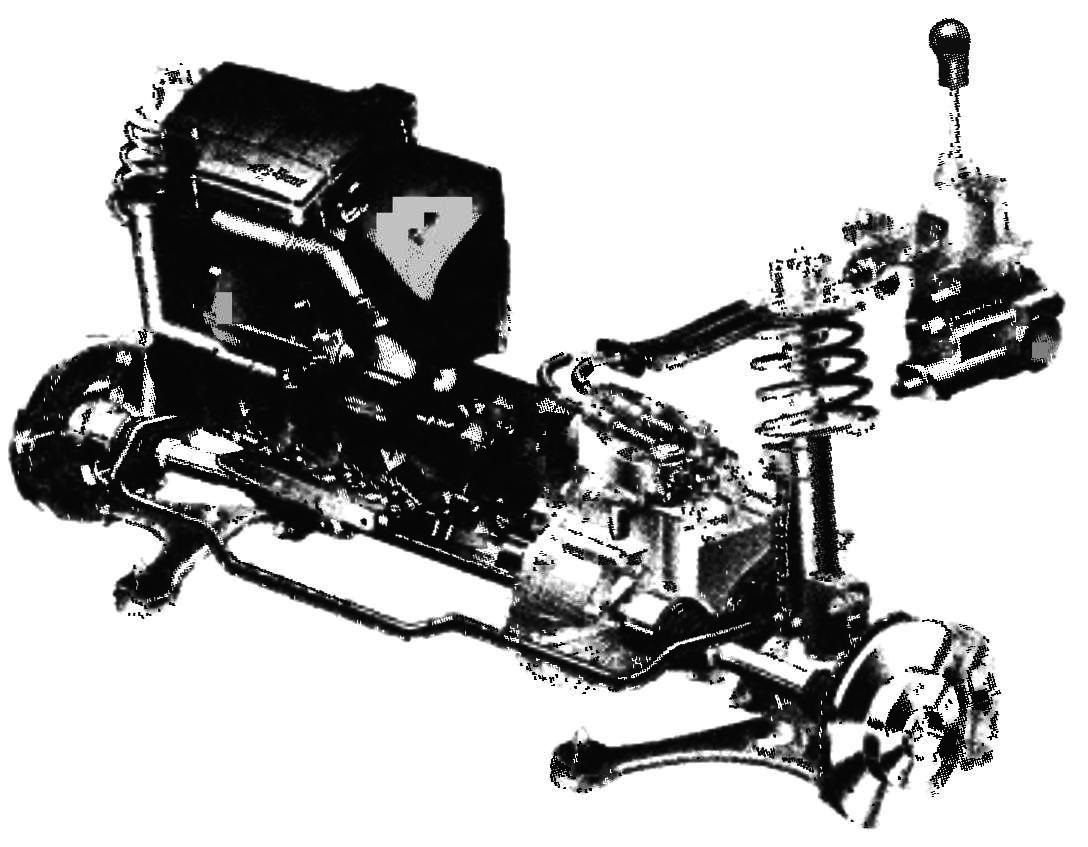 The front axle of the car 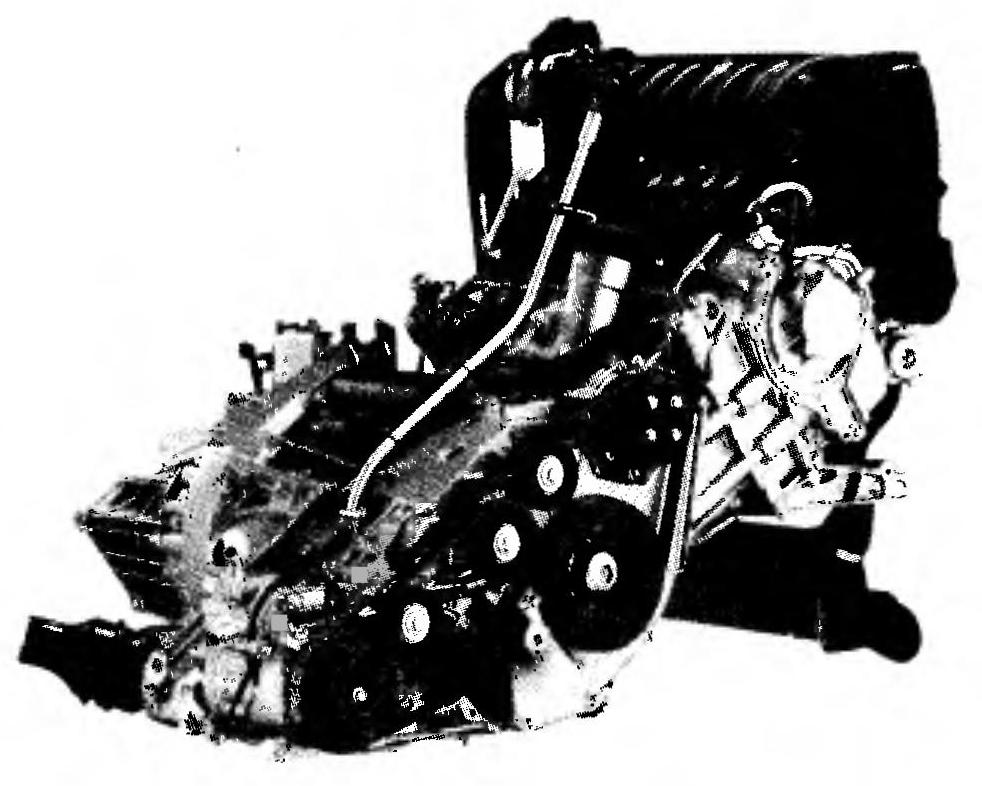 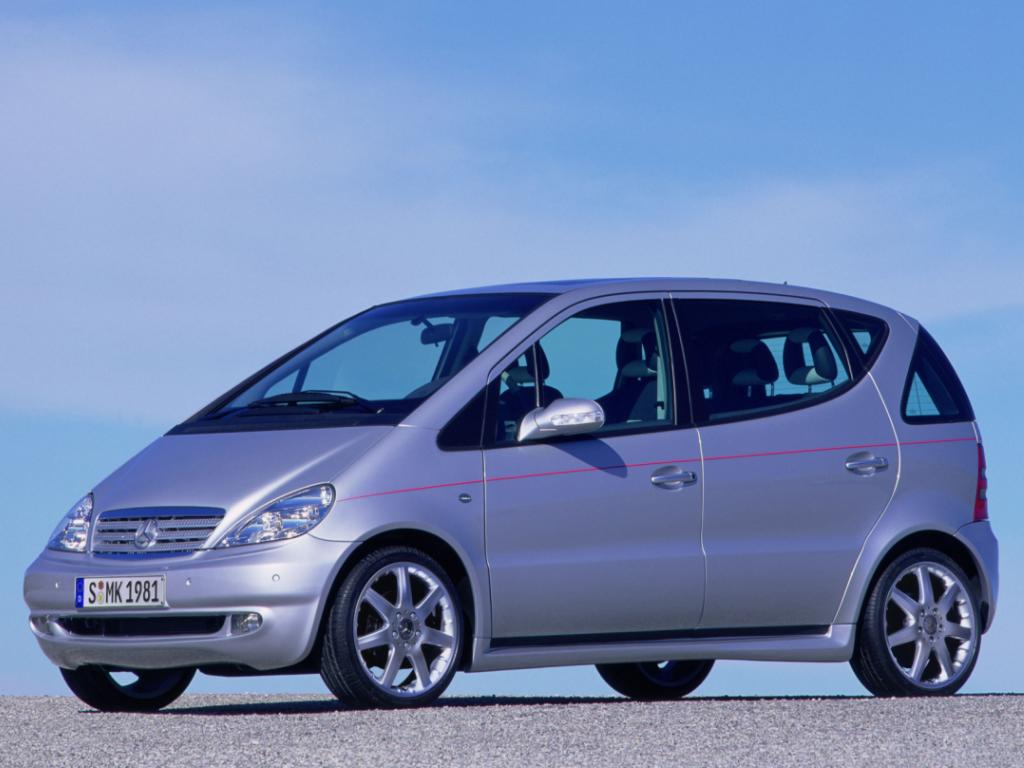 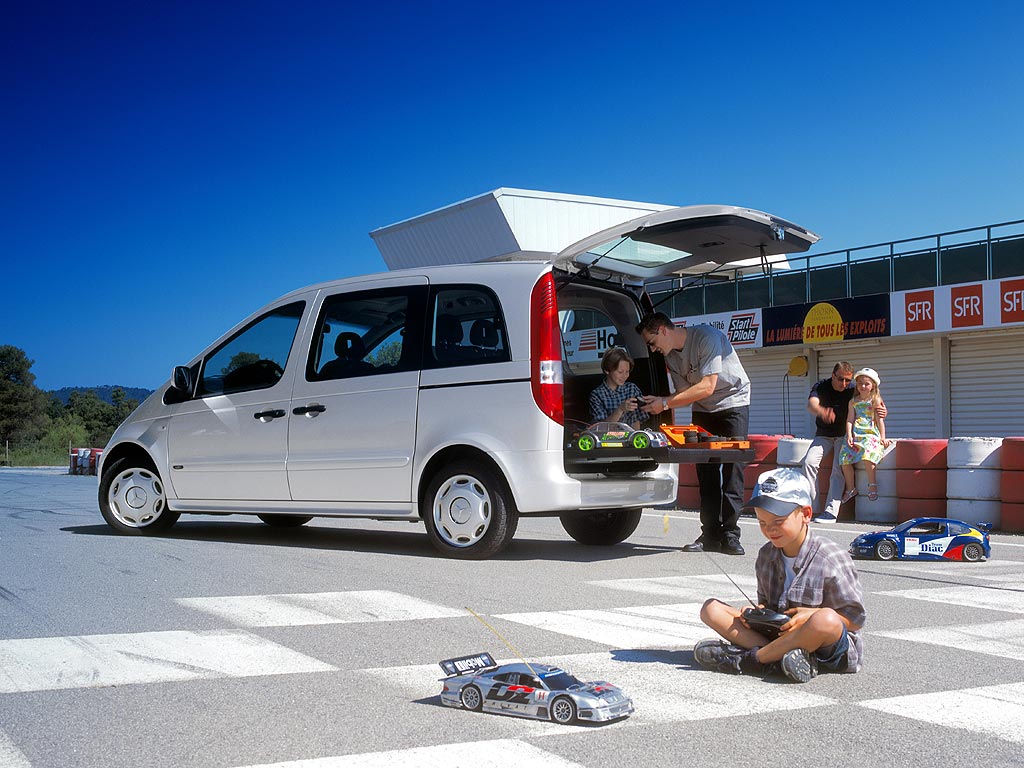 The development of the constructive scheme of A-class minivan, MERCEDES-BENZ VANEO
The machine fell on its side that had for the company very serious consequences. New car sales had to be delayed for three months to finalize the suspension, changing dimensions of the wheels and the equipping of cars with ESP (Electronic Stability Program), all of these improvements were made without increasing the retail price of the car.
Recall that the ESP system is purposefully adjusts braking force to front and rear wheels, thereby reducing the danger of skidding and helping the driver to cope better control of the car in a critical situation. The system complements the anti-lock regulation of a wheel with a number of additional sensors allowing to calculate the movement of the vehicle when skidding. The ESP computer compares the actual behavior of the machine with the calculated parameters; upon detection of a discrepancy between the system intervenes in vehicle control and dosed pulses of braking one or more wheels and reducing engine torque again puts the machine at an optimal rate. ESP corrects as errors driving the tendency to skidding due to icy conditions, wet pavement, fine gravel, on the road or the other hindering the drive of the circumstances under which the driver is usually almost no chance to keep the car on course with rudder and brakes.
In the spring of 2001, the company has released an updated version of the MERCEDES-BENZ A-class — it is extended to 170 mm due to the increase in wheelbase. While the front and the back almost has not changed — to identify the longer a car can only be increased at the rear doors. This “stretched” car (its length is 3776 mm) was still shorter than his “classmates” — AUDI A2 and OPEL CORSA.
In addition to petrol engines with multipoint injection displacement 1,4,1,6 and 1.9 liters and power of respectively 82, 102 and 125 HP, the car is equipped with upgraded turbo CDI working volume of 1.6 l and 1.7 L. the First has an output of 75 HP up 60 HP and the second 95 HP versus the previous 90 HP Turbo diesel are not only high performance and low fuel consumption — compact design, light weight and a good design is easy to enter them into the concept of “sandwich”.
The transverse position of each of these powertrains allows you to place the drive units in the narrow space in front of the body and partly underneath it; in conjunction with the position block parallel to the motor shield (angle 59 degrees), this design decision causes the motor and gear unit, as well as in the “short” version of the car to shift down in a frontal collision.
The car is equipped with automatic transmission with electronic tuning, which adapts as conditions of traffic and to the driver’s wishes. Box is equipped with a hydrodynamic gearbox and an asynchronous Converter, which allows to achieve an optimal balance of fuel economy, driving dynamics and comfort.
The torque Converter is activated at a low pace drive and works with an adjustable using the computer constant slippage, disconnecting the engine and transmission. As a result, when the machine movement does not occur uncomfortable oscillations and vibrations. To enable the transmission electronics are operating five special valves, which include multi-disc clutches asynchronously coupling device. 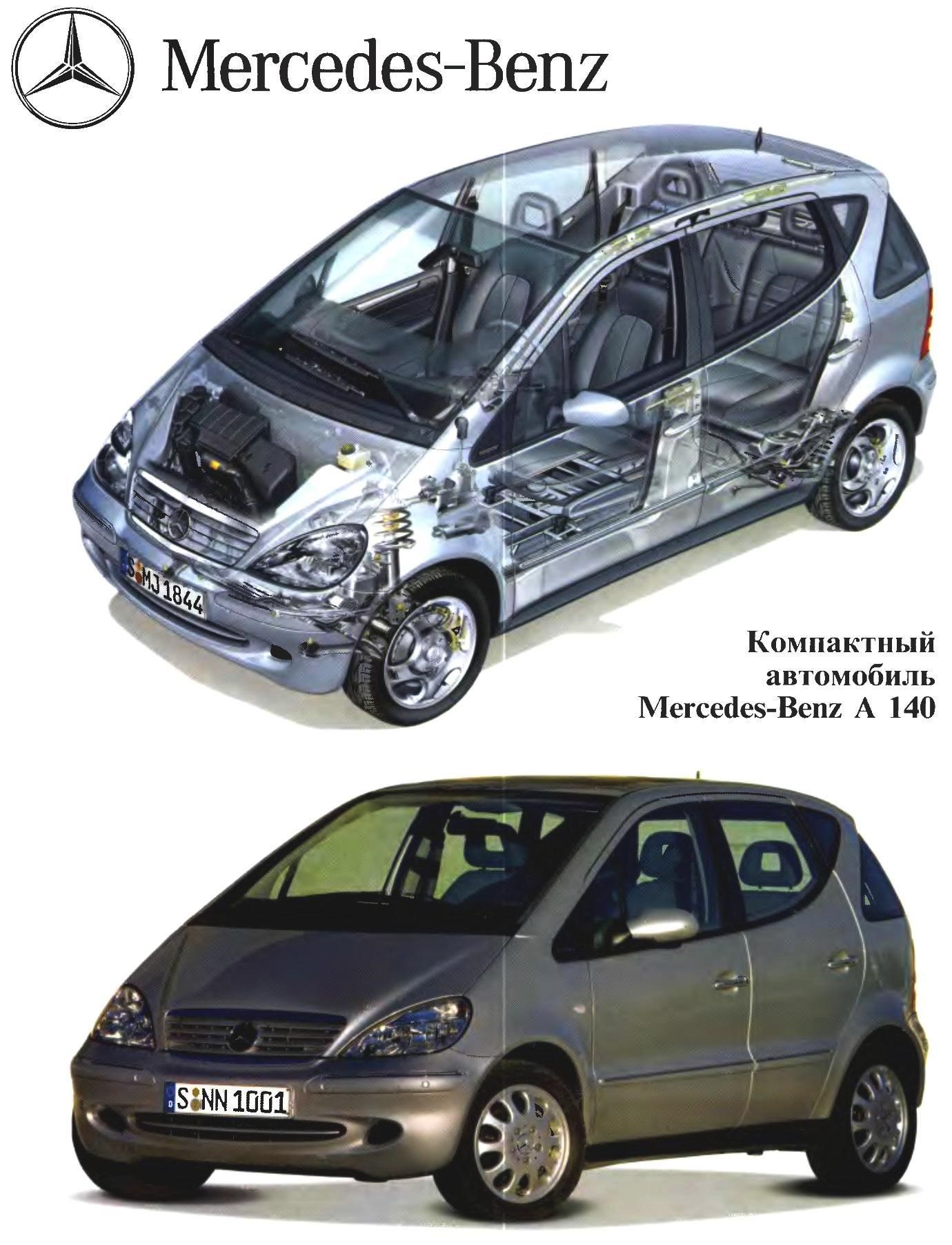 With a switch you can manually select one of the two programs include: S (standard) or W (winter). The final program is not fully practiced individual transmission, and the movement always starts in second gear.
MERCEDES-BENZ A-class can also be equipped with an automatic clutch that represents a kind of alternative to the box-machine. The sensing device detects the running gear and the desired driver, then the microcomputer with a motor and two cylinders disengages the clutch, and then shift the transmission automatically turns on. The automatic clutch is able to sensitively tune into the individual driving style and transmission control.
The volume of the interior of an elongated car increased by 11 percent and amounted to 1930 L. In the first place, have changed significantly inhabited the space for the rear passengers — now they are as spacious as the MERCEDES S-class! And the volume of the cargo compartment is also substantially increased, removing the rear seats the capacity will be 1530 L.
Changed and appearance of the machine: it has different bumpers and the brightest lights, new grille, on the side of the body have Longitudinal moldings. The tailgate has a small pen button instead of the fiddly buttons.
Changed and interior of the car due to new trespicio steering, Central console and upholstery of the cabin.
The standard equipment of the machine includes front and side airbags.
In March 2002, at the dealerships, Mercedes-Benz appeared designed tuning division AMG, the new modification A-class — MERCEDES-BENZ A 210 EVOLUTION. The car received four-cylinder gasoline engine working volume of 2.1 l with 140 HP, developing torque of 205 Nm.
The machine is equipped with developed front spoiler with integrated fog lights, new grille, profiled sills, exterior rear view mirrors with repeaters direction indicator, apron under the rear bumper with window for chrome exhaust nozzles and deflectors on the rear window. The car is equipped with the wheels and tires 205/40ZR17.
The suspension of the car has “sports” character — it has shock absorbers with specially selected characteristics and reinforced rear stabilizer. Both front and rear wheels AND A 210 EVOLUTION have disc brakes, and front discs perforated to provide effective braking when driving on wet asphalt.
As practice shows, successful design solution has the property to spread to an increasing number of new facilities. That’s what happened with compact car A-class: the car original layout, well received by numerous customers, first extended, and then equipped with more powerful and more economical engines, and then its Foundation was used to create a compact minivan, named the MERCEDES-BENZ VANEO.
The minivan, which incorporates the fundamental solution from the design of its predecessor, has increased in comparison with cars A-class, base and length. The car was inherited from them also body structure, suspension, platform, type “sandwich” that allows you to save the life of the passengers — in case of emergency collision of the motor moves back and down, crushing the easily deformable lower part of the “sandwich” and leaving the top intact.
Technical characteristics of the car MERCEDES-BENZ A 140 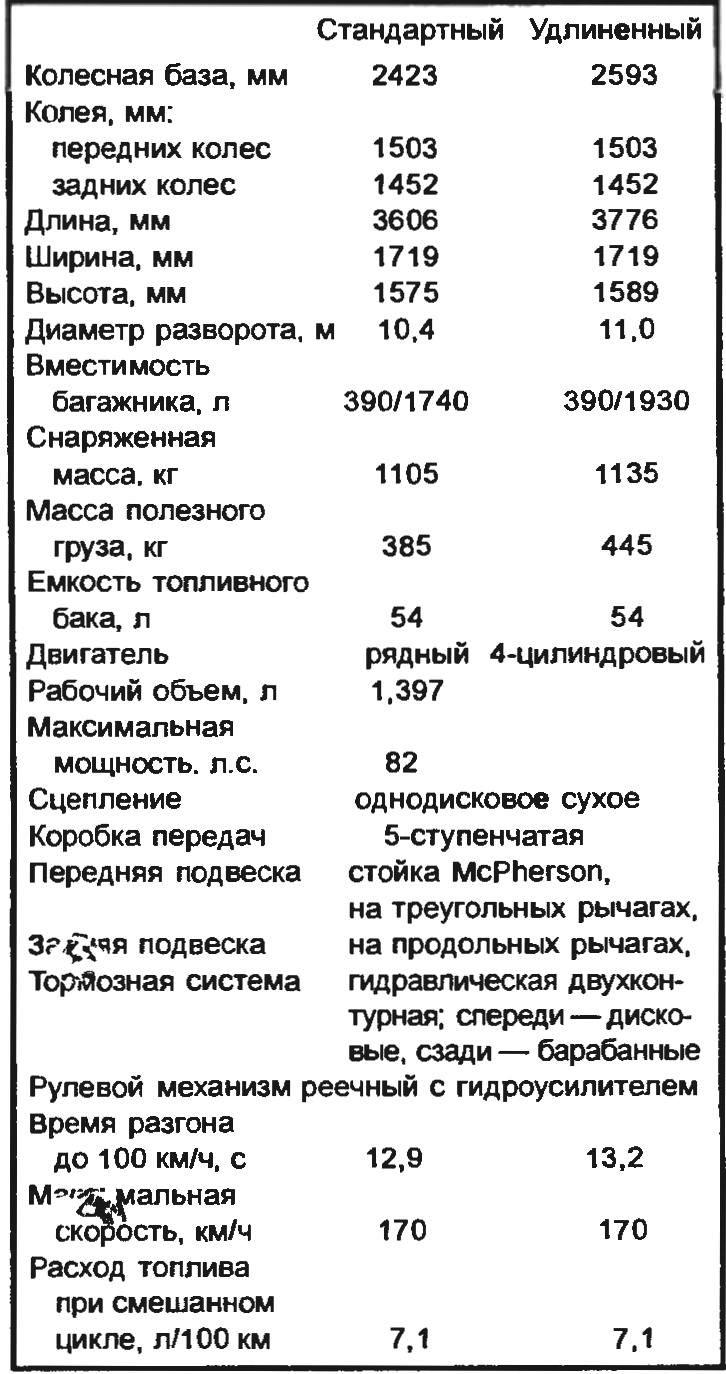 From A-class to the minivan and got three petrol engine capacity 82,102 and 125 HP and two turbodiesel capacity of 75 and 90 HP Engines complete with box with manual transmissions, automatic and a kind of “automatic” manual transmission with automatic clutch: transmission it switches the usual lever, but squeeze the clutch pedal it does not need it in the car simply does not.
Standard VANEO, mindful of the failures in passing And 140 “elk test”, immediately introduced an electronic system of stabilisation ESP.
So, the first step from the “hundred fortieth” in the higher classes is made. Curious what will be second?
I. EVSTRATOV