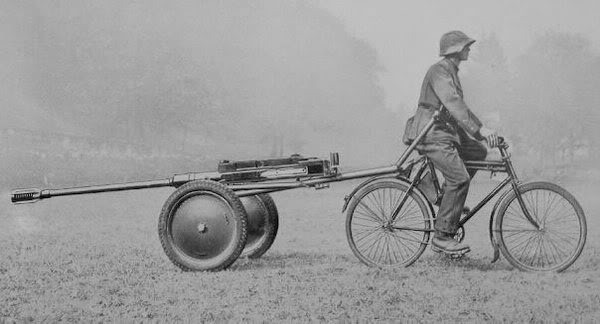 Heavy duty anti-tank gun BOB-25. The famous “sorokopyatki” — 45 mm 19K anti-tank gun of the sample in 1932 and its upgraded version 53K model 1937 was in fact the only anti-tank guns by June 22, 1941. Ballistics and armor-piercing 45-mm antitank gun 53K was relatively good, but its 560-kg mass was too big even for battalion guns. However, the platoon consisting of two such guns that were part of many infantry battalions.

With the mid 30-ies in the USSR, there have been several attempts to create light company and battalion anti-tank guns caliber 20 — mm. 37 thus, in early 1937 were tested 20 mm anti-tank gun CBSV-51 system Korovin experimental model which was manufactured in Tula.
The barrel of the gun was securely fastened in the casing. Semi-automatic reloading operated with exhaust gases. Shutter perekashivayutsya, the type of “colt”. The food was made from single-row magazine capacity of five rounds.
In 1936— 1938 was held joint tests of anti-tank guns — 20-mm INZ-10 (20-mm anti-tank rifle company) designs Vladimirov and the big, YAC caliber 25 mm design Mikhno and tsyrulnikov and 37-mm guns, ETC.
In 1938, the OKB-15 under the leadership of the Hospital was designed semi-automatic 37-mm antitank gun. Its ballistics were comparable to 37-mm anti-tank gun model 1930, projectile weight was 0.5 kg. Cannon worked on the scheme “bulging barrel” where the shot occurred at the time of the roll forward of the barrel, which somewhat reduced the impact of the rollback on the carriage. The mass of the oscillating part of the gun was 57 kg, weight in firing position — 84 kg Rate of fire of the gun reached up to 30 rounds per minute. However, none of these designs did not satisfy GAU.
The German command also was not experienced satisfaction from their 3 7-mm anti-tank guns Cancer 36, which in 1941 was ineffective in the struggle with the Soviet tanks T-34 and KV. However, the appearance on the front of German heavy anti-tank gun s.Pz.B.41 became an unpleasant surprise for the Soviet tank — as it turned out, at close range the gun was struck not only “thirty”, and heavy KV. A characteristic feature of s.Pz.B.41 was the trunk, which had in the beginning of the channel caliber 28 mm, and the muzzle— 20 mm.
Interestingly, this anti-tank gun artillery system was called for reasons of a bureaucratic nature, in fact it was a classic anti-tank gun with a recoil device and with a wheel, so would be fair to describe s.Pz.B.41 anti-tank gun. With AV it was only a combined lack of guidance mechanisms — the barrel had to be moved manually.
The fire from this gun could lead as to the wheels, and bipod. Gun easy to disassemble into parts. For the airborne troops were issued light weight to 118 kg variant of the gun — she was missing her shield, and the design of the gun carriage used light alloys. Instead of regular wheels were set in small rollers without suspension.
The ammunition’s.Pz.B.41 consisted of the fragmentation shell and sabot with tungsten core. Instead of copper bands applied in the classic shells, and the other had two centering annular protuberance made of soft iron. When fired they jammed and crashed into the rifling of the barrel. With the passage of the projectile along the bore diameter of annular protrusions decreased from 28 to 20 mm.
In early 1942, the specialists of the Artillery Academy Dzerzhinsky headed by engineer-Colonel A. M. Sidorenko studied captured 28-mm German guns and decided to create a similar design but more powerful 25-mm light anti-tank gun company of LPP-25. Unlike the German, BOB-25 is planned to equip the barrel with the usual channel as drilling of conical channels was very costly, has not yet been developed with domestic plants. 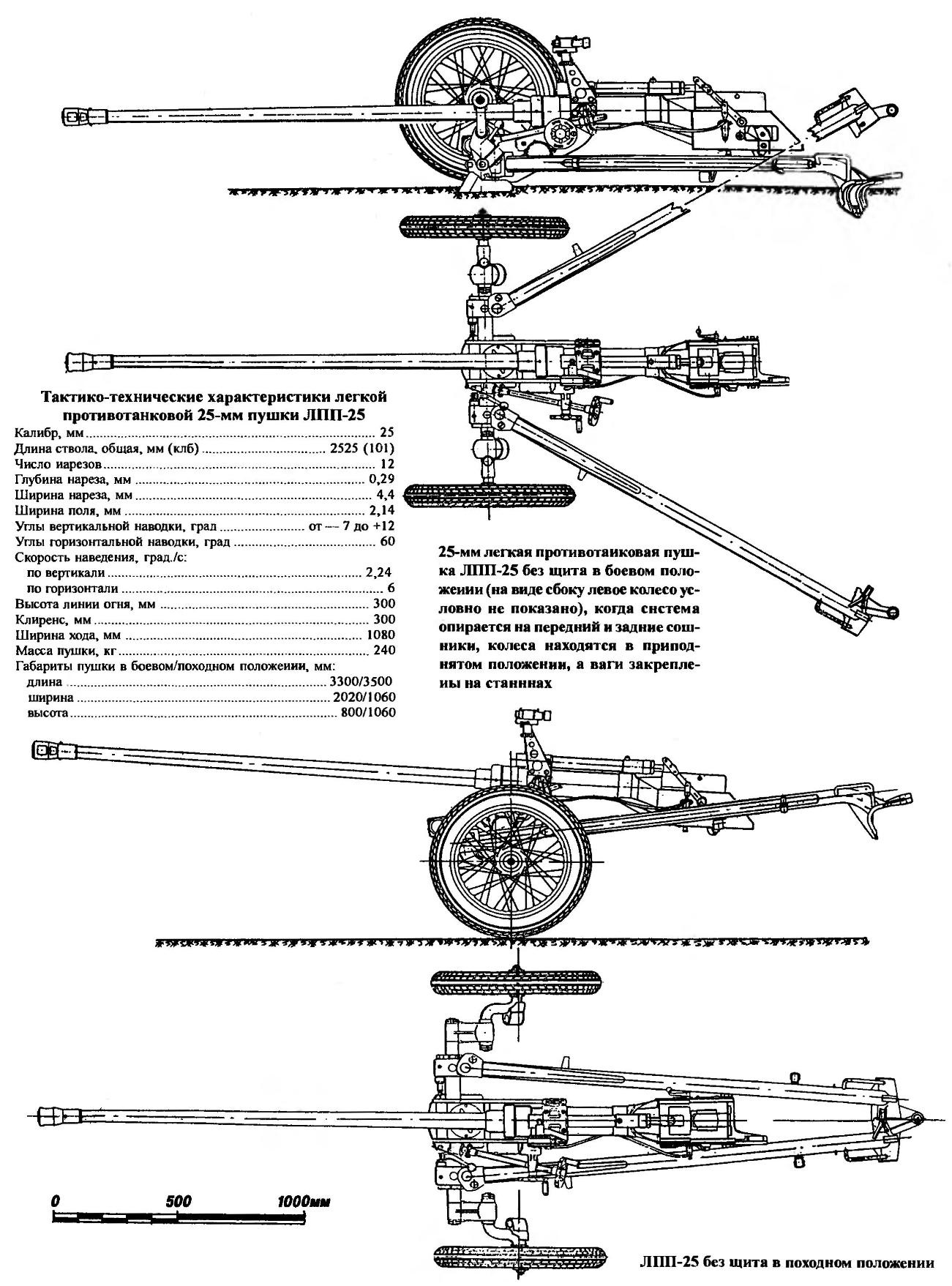 Design LPP-25 was completed in may 1942. The manufacture of guns and breech of the guns were made in the city of Perm factory number 172. However, due to the heavy workload of the factory serial orders of his government did not find time for the manufacture of trunks for LPP-25. Only after the intervention of a member of the GKO Beria trunks was urgently put into production and made in October 1942. Manufacture of components and Assembly of three prototypes LPP-25 was produced in Tashkent, the plant number 702.
Gun barrel — monoblock with screw breech. The steepness of the cut is constant and the first sample it was 34 gauge, and the second is 45 calibers, which was done in order to verify the behavior of copper belts and the stability of shells with an initial velocity of 1400 m/s and above.
The breech of the cannon BOB-25 differed from the shutter-37 mm automatic anti-aircraft gun model 1939. Recoil brake was hydraulic spindle type, lakatnik spring, linkage of the sector. Two samples were rotary mechanisms with worm sectors, on one it was a horizontal traverse was carried out by the shoulder of the gunner.
The shield of LPP-25, inclined at an angle of 30 degrees to the vertical, had a thickness of 3 mm. Gun was fitted with a telescopic sight of the type “Duck” mounted on zapfino the clip cradle. The reticle was a simple optical system with a three-fold increase and a field of view of 12 degrees. Combat crank axis allows you to change the height of the line of fire. Wheel guns were the same as the bike’s AM 600, NORFOLK, and the pneumatic tyre were replaced by others from the spongy rubber. Spring suspension made towing the gun car on the highway at speeds up to 60 km/h.
On the hike at high position fighting the axis height of the system was 1060 mm. In battle when you have low combat position of the axis height of the gun did not exceed 800 mm, and the center of gravity gun transferred forward, which significantly improved the stability of the system. When shooting the gun rested on the ground front Shoe, and the wheels were posted. The project covered the transition from marching to combat position for 8 — 10 seconds, but in factory tests, the rate was 15 — 20 seconds.
The project provided the guns rate of fire 20 to 25 rounds per minute. Originally it was planned to supply the cannon BOB-25 regular shells from the 25-mm automatic anti-aircraft guns 72K of the sample 1940: armor-piercing Br-132 weight 295 g and shrapnel ORM-132 a mass of 288 g. However, due to the increase of the charge shells LPP-25 had a considerably higher initial velocity of 1200 m/s instead of 900 m/s at 72K. In the future it was planned to start mass production of 25-mm sabot projectile with a mass of 200 g with a tungsten core, which was to have an initial speed of 1400 m/s. the Brass sleeve was created on the base of the sleeve 37 mm anti-tank gun model 1930. 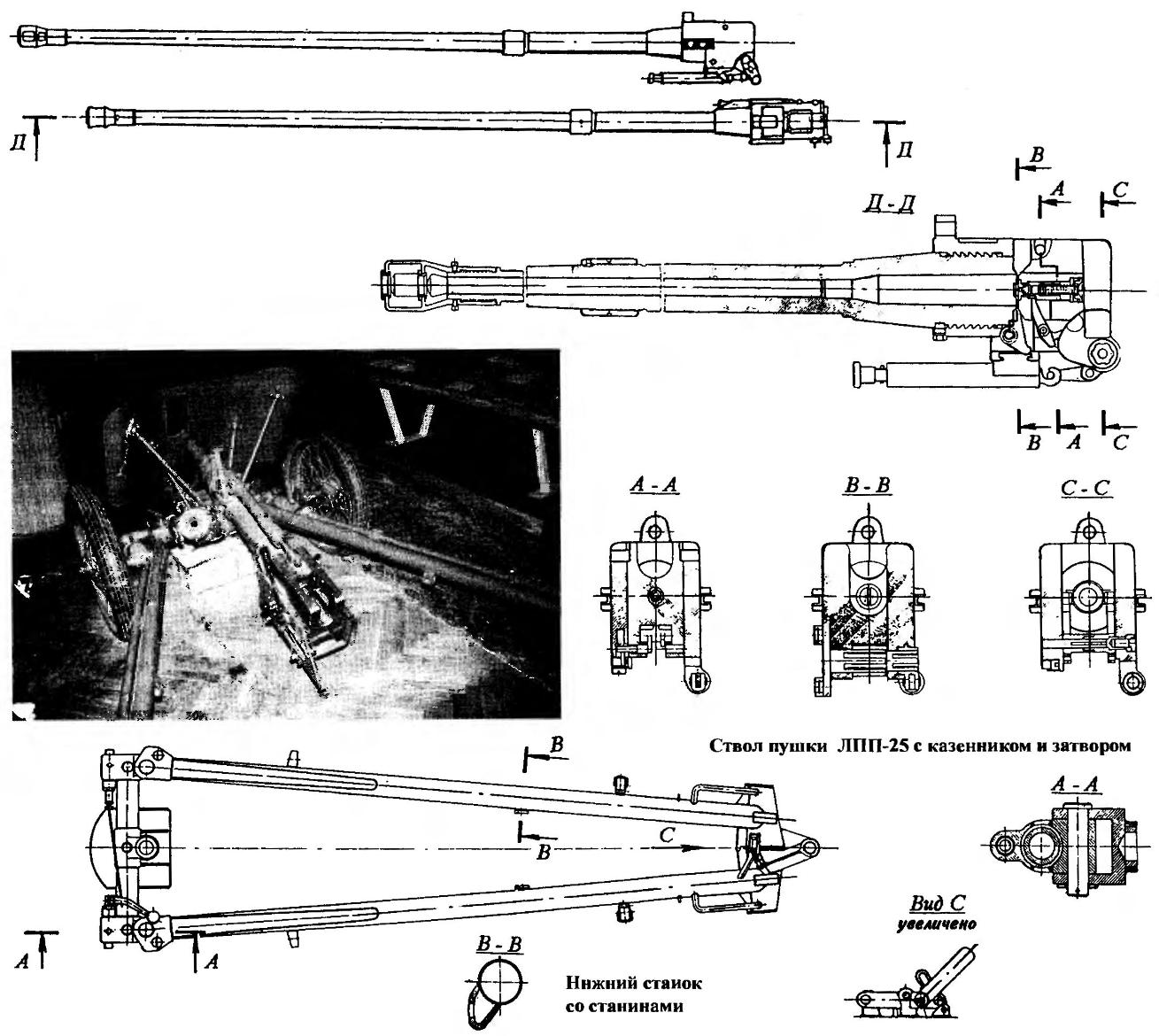 At a distance of 100 m gun BOB-25 shell Br-132 was broken through normal armor thickness of 73 mm, meeting at an angle of 30 degrees — 53 mm. Under the same conditions 28-mm German gun pierced, respectively, the armor thickness of 75 mm and 45 — 50 mm. But at a distance of over 200 m projectile Br-132 was out of competition, compared to a sabot projectile of the German gun — so, at a distance of 400 m LPP-25 normal shot of 62.3 mm armor and the German gun — only 40 mm. in the introduction of sabots LPP-25 may at a distance of 100 m to break the normal 105-mm armor, and meeting at an angle of 30 degrees — 78. Thus, the gun BOB-25 can easily hit all of the German tanks in service with the Wehrmacht on 1 January 1943, and also had chances of success in the fight at short distances with a promising tanks “Tiger” and “Panther”.
In January 1943, at the site, located in the station Azat-Bash near Tashkent was conducted by factory test two prototypes of the 25-mm gun BOB-25. Shots were fired shells Br-132. Usually light guns with high ballistic bounce with every shot. However, LPP-25 behaved very steadily, jumping system was negligible. The main disadvantage of the gun was too large capacity of the muzzle brake, which absorbs at least 65 percent of the energy of the rollback, the rollback of the barrel of the gun instead of the estimated 240— 260 mm was only 137— 160. it Happened that energy rollback needed in order to automatically open the shutter, and it had to be done manually.
According to the results of factory tests of LPP-25 was recommended to conduct field tests. April 19, 1943, two prototypes of LPP-25 arrived at the Gorokhovetsky polygon. But, nevertheless, this powerful and lightweight anti-tank gun, which would make a fine anti-tank weapons for the infantry companies and battalions, cavalry, motor and airborne units and finally to Partizan, is still not adopted.
Comparison of 25-mm cannon BOB-25 with a 28-mm gun s.Pz.B.41 is not in favor of the latter. Formal data on the weight and armor-piercing — they are almost identical. However, effective piercing projectiles, the armor penetration from LPP-25 could be better than German guns. However, the 28-mm gun s.Pz.B.41 was a much better worked out both structurally and technologically.
The main feature of the German guns was a tapered bore is to develop its production of the domestic plants are tried from 1940 to 1952, but, alas, in a series of such barrels. However, our BOB-25, designed by teachers of the Artillery Academy, which was evacuated in the distant Samarkand, such a trunk is not required. The gun was very cheap to produce and was the most standardized with commercially produced guns.
All parts and assemblies of a gun, except the barrels, was made in Tashkent a small artisanal factory No. 702 of ear BOB-25 could shoot not only specialized, but regular armor-piercing rounds 25-mm automatic antiaircraft gun of the sample of 1940 in Addition, the designers have offered to design for her new piercing projectiles. Even assumed the use of captured tungsten cores from the shells of the German 28-mm gun s.Pz.B.41.
Apparently, the extreme simplicity of LPP-25 and has become an obstacle to the launch of the light anti tank guns into production. Typically, the major design bureaus, and a solid gun factories were not interested in the launch of a series of “alien” guns. A legitimate reason to abandon unprofitable order if you wish, you could find always.
To our time survived only one instance of the cannon BOB-25, now kept in the Museum of the Artillery Academy named after Peter the Great (ex-im. Dzerzhinsky). And documentation on design and test tools LPP-25 was lying in the archives classified as “top secret” until 17 may 2002.
A. SHIROKORAD