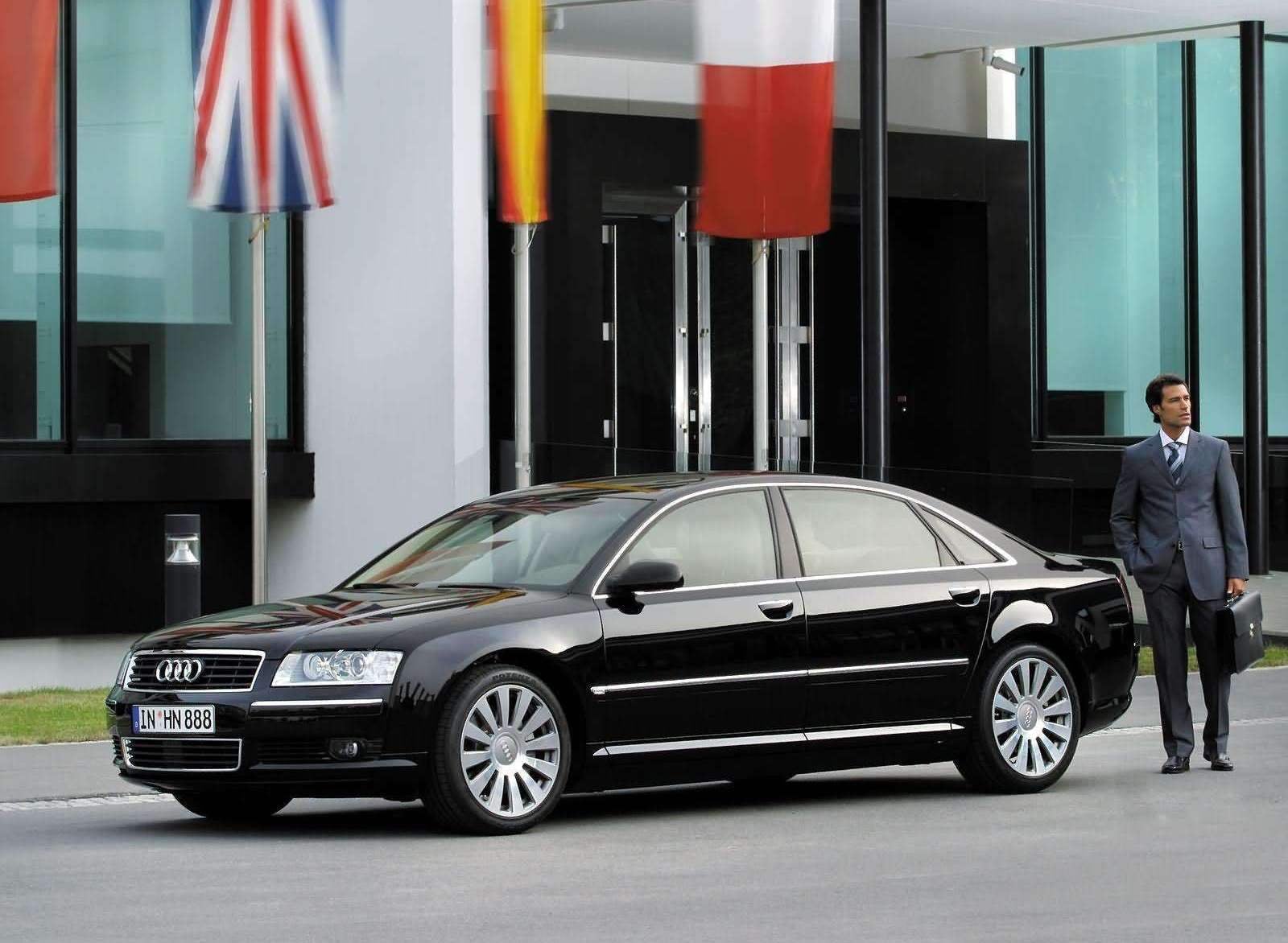 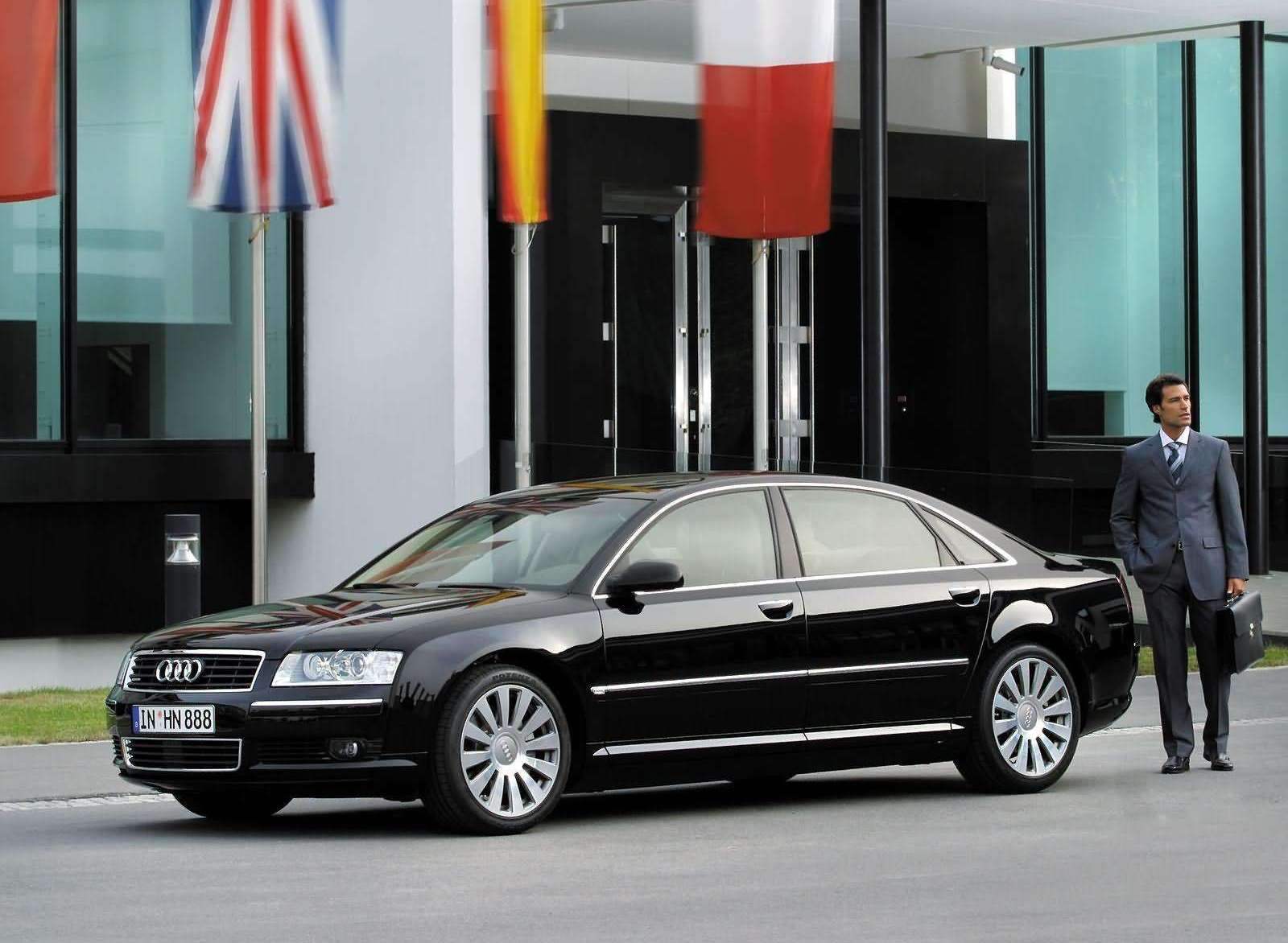 Executive car AUDI A8 L 6,0 QUATTRO. It is difficult to make a choice between the “Klin” and “Zhigulevskoe” beer; it is even more difficult between firms computers “Macintosh” and “Microsoft”. And it is almost impossible to imagine anyone opting for a luxury car from the four most-most — AUDI A8 L 6,0 QUATTRO, MERCEDES-BENZ S 600 L, BMW760Li and VOLKSWAGEN PHAETON.

Indeed, owners of such cars — they are representatives of a completely different world that operates completely different values and concepts. The struggle for such a buyer manufacturers exclusive limousine is absolutely not the same methods that won buyers the VAZ “classics”.
The selection criteria for a supercar buyer is not so much the machine of the highest class is stuffed with all modern equipment, which only exists on the day of the launch of a series. Nevertheless, manufacturers continue to find new high-tech developments for super-expensive cars, while seeking at least a half step ahead of the competition.
Today in the “Showroom” it will be just about them — the most prestigious and most expensive in the first place — just released from the factory gates of the Audi plant in Ingolstadt 12-cylinder AUDI A8 QUATTRO 6.0 mm. Machine, by the way, is available in two variants — standard (AUDI A8) and with extended 130 mm wheelbase (AUDI A8 L).
Latest new Volkswagen-Audi — a 6-liter 12-cylinder engine with a W-shaped arrangement of cylinders. They are equipped with the VW PHAETON and AUDI A8. The crankshaft of this engine strung with twelve rods reminiscent of a fantasy tree. In fact, this engine is a “spark” of the two V-shaped “sixes,” and this arrangement allowed us to make the power unit is extremely compact and light. 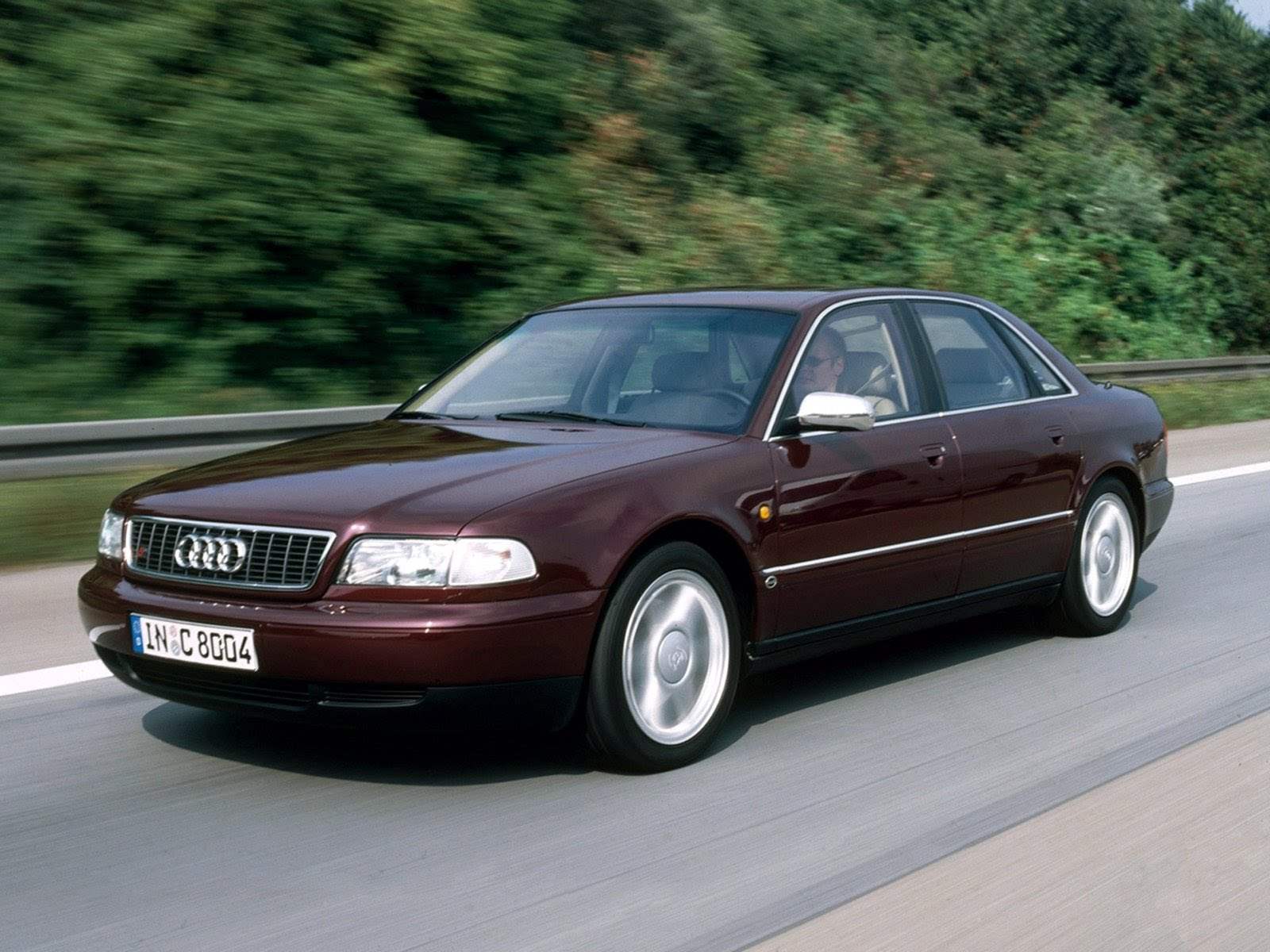 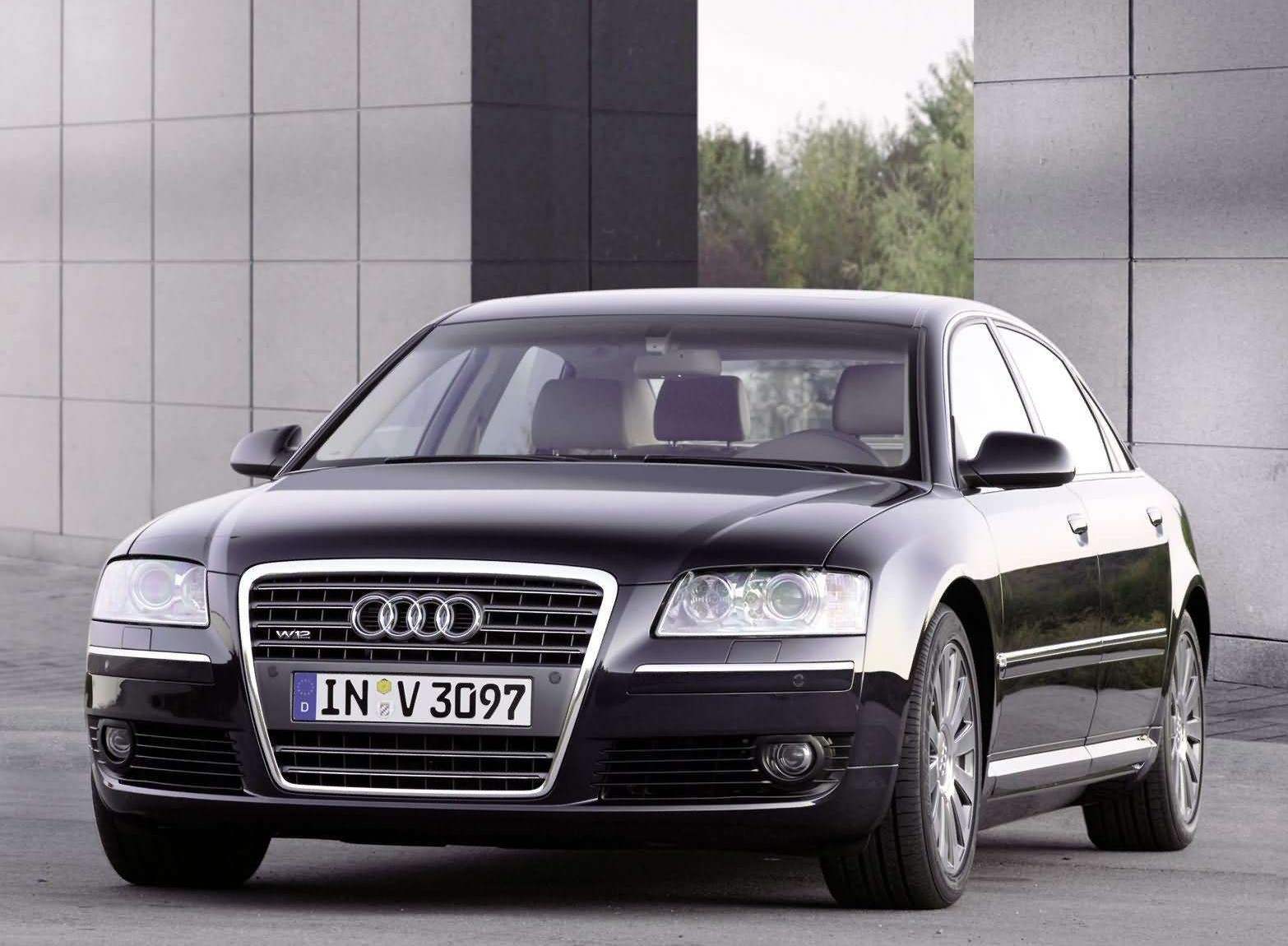 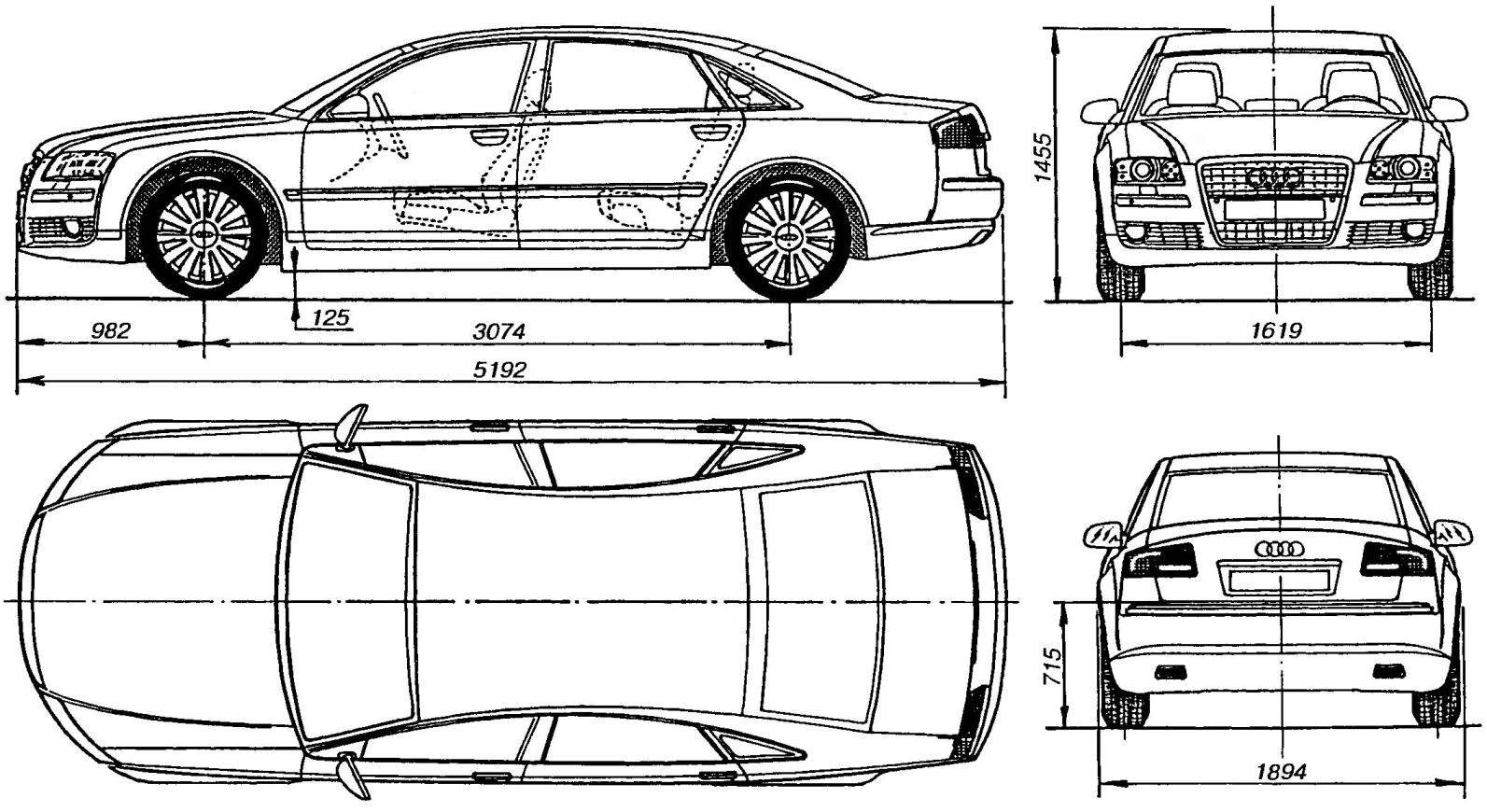 The geometric scheme of the car AUDI A8 L 6,0 QUATTRO 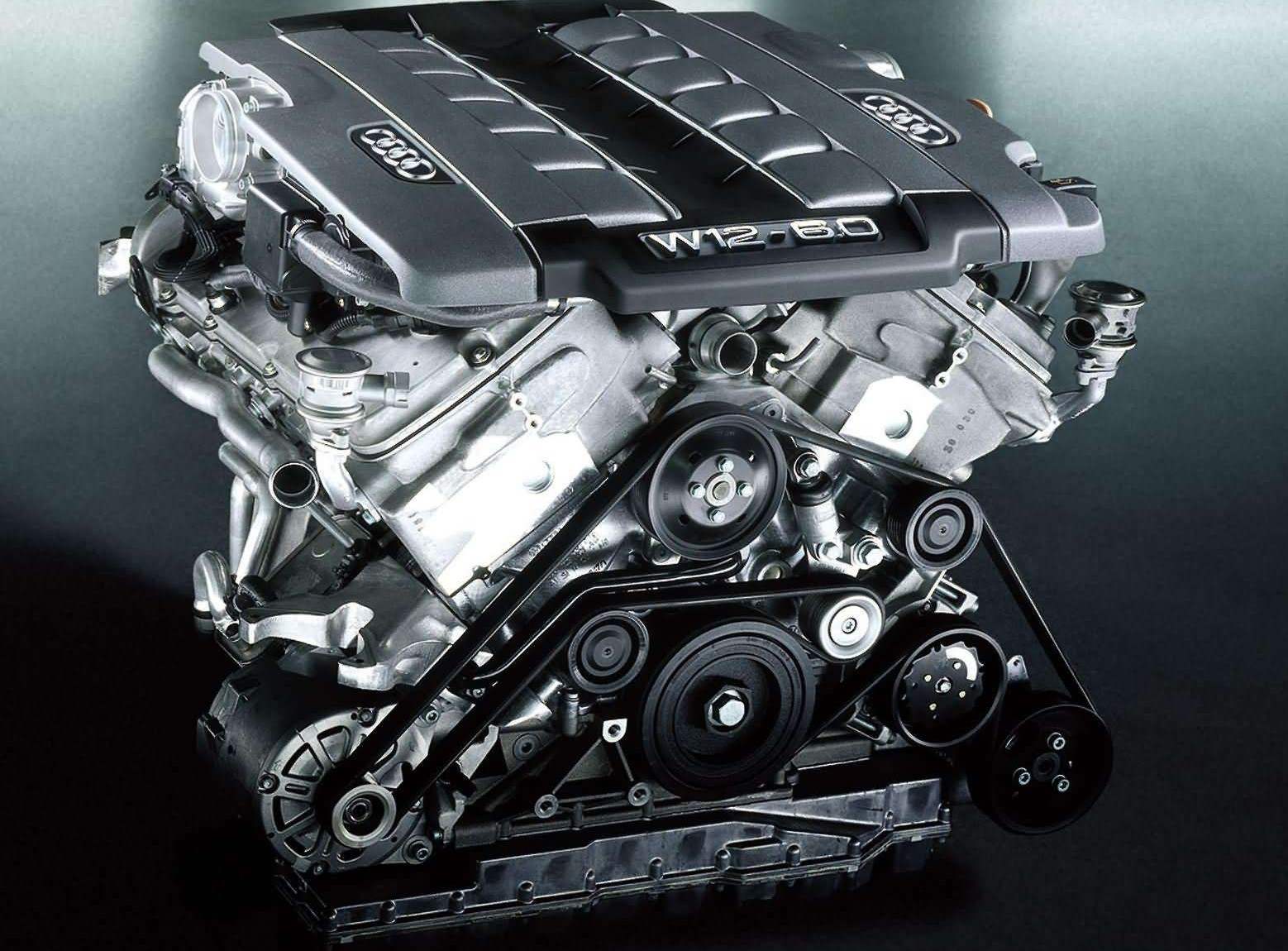 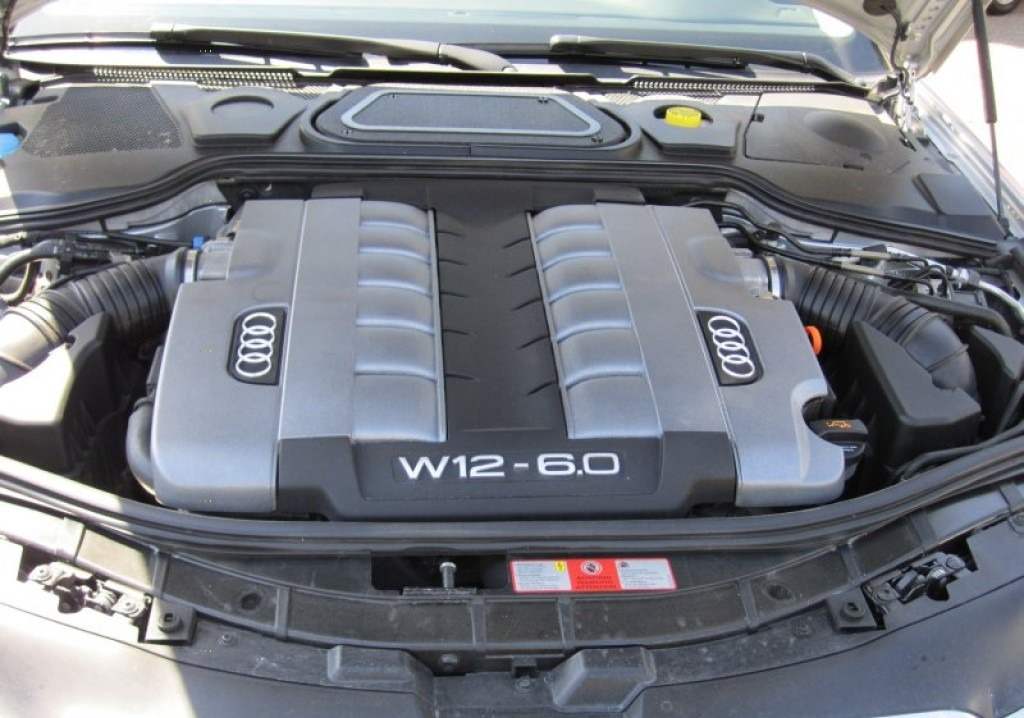 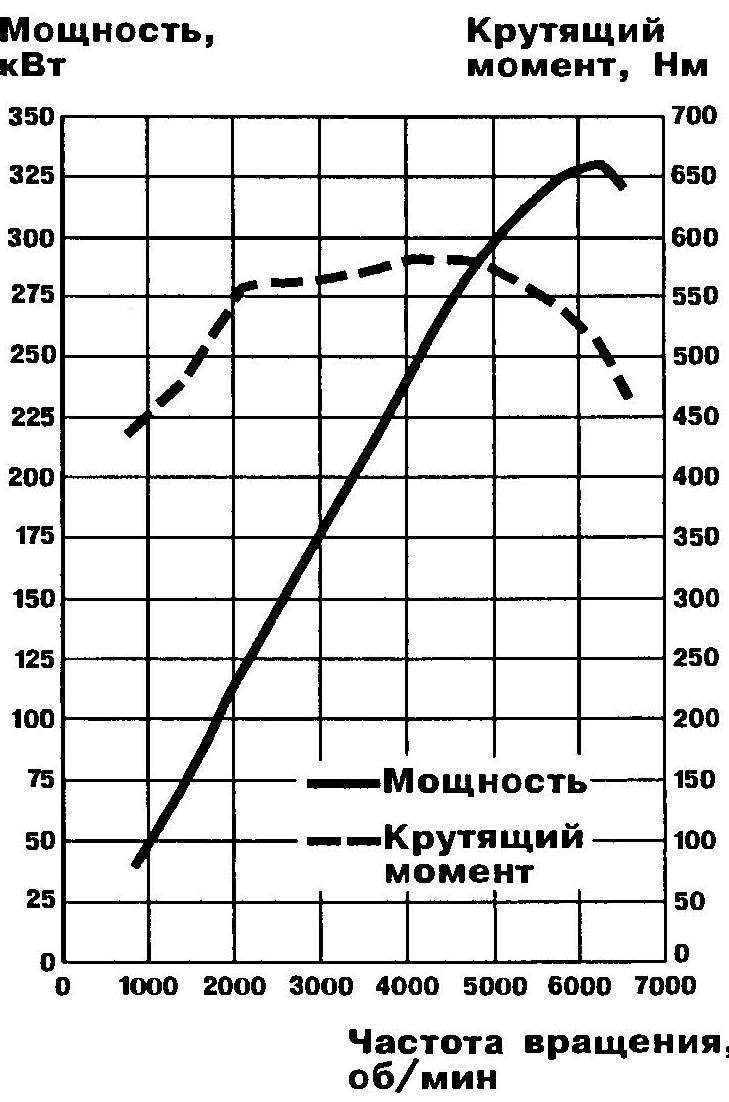 External speed characteristics of the W12 engine of 6.0. From the graphs it is seen that the motor develops a maximum torque of 580 Nm at 4000 rpm, and 95 percent of this value is achieved in the range from 2300 to 5300 rpm
Judge for yourself — length aluminum motor W12 is only 513 mm width — 690 mm. the motor is adjustable valve timing on the inlet and outlet, and each of the twelve cylinders has four valves with roller Cam followers. Maximum power compact “monster” is 450 HP
It should be noted that the compactness of the power unit allowed us to place it above the front axle and successfully compound with four-wheel drive transmission. The latter, incidentally, will also attract wealthy th customer — branded powertrain QUATTRO with limited slip differential axles TORSEN in conjunction with automatic gearbox (automatic transmission) TIPTRONIC makes truly all-weather limousine. By the way, the automatic transmission allows to switch gears in manual mode.
Dynamics of almost all-aluminum car, which at one horsepower of engine power accounts for only 4.4 kg weight of the car, impressive. Acceleration to the first hundred takes only 5.2 s, while the second is 17.4 C. Further the set speed occurs as a casual—up to 250 km/h. However, if necessary, the speed limiter is deactivated and the car can accelerate to a high threshold is 310 km/h.
When accelerating the car’s computer changes the algorithm of the suspension, translating it from comfort mode to sport. However, this function can be adjusted manually by the driver, transferring the suspension from comfort mode to sport with the joystick intelligent systems MMI, located next to the lever automatic transmission. Incidentally, the same joystick controls and other vehicle systems.
The interior of the AUDI A8 L 6,0 QUATTRO has a refined nobility smartly designed accentuates the carefully calibrated combination of chrome and leather, wood and aluminum inserts. Architecture front panel with high-tech devices, crowded to excess information, and an ergonomic multi-function terminal MMI with 7-inch display.
The Central place in front of the cabin is a large chetyrehspitsevy wheel, form the middle part of which as it repeats the loop, pulsradio-white lattice (for short wheelbase version of the car steering steering-wheel — transmisia). The latter, incidentally, is substantially different from the design of the front of the AUDI models of yesteryear with its monumentality— it is a huge chrome outline in the shape of a trapezoid with rounded corners. Unusual grille underlines the aggressive sportiness of the new design. 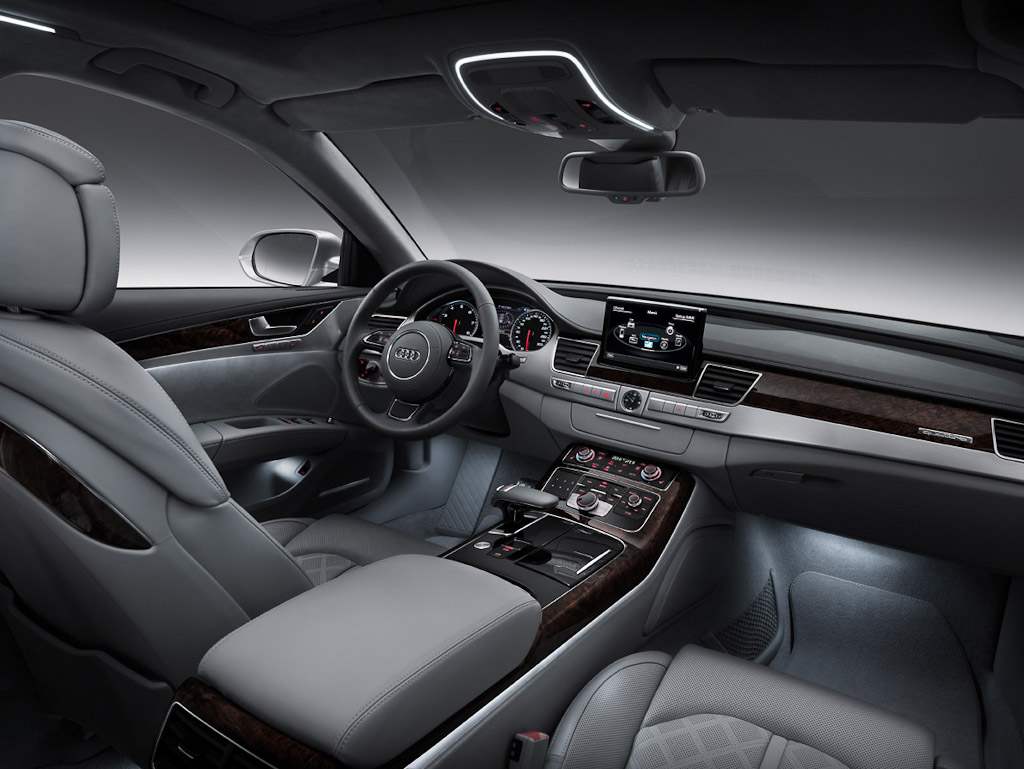 The interior of the front of the cabin. The characteristic metallic finish of the wheel hub steering, the shape of which follows the contour of the radiator grille 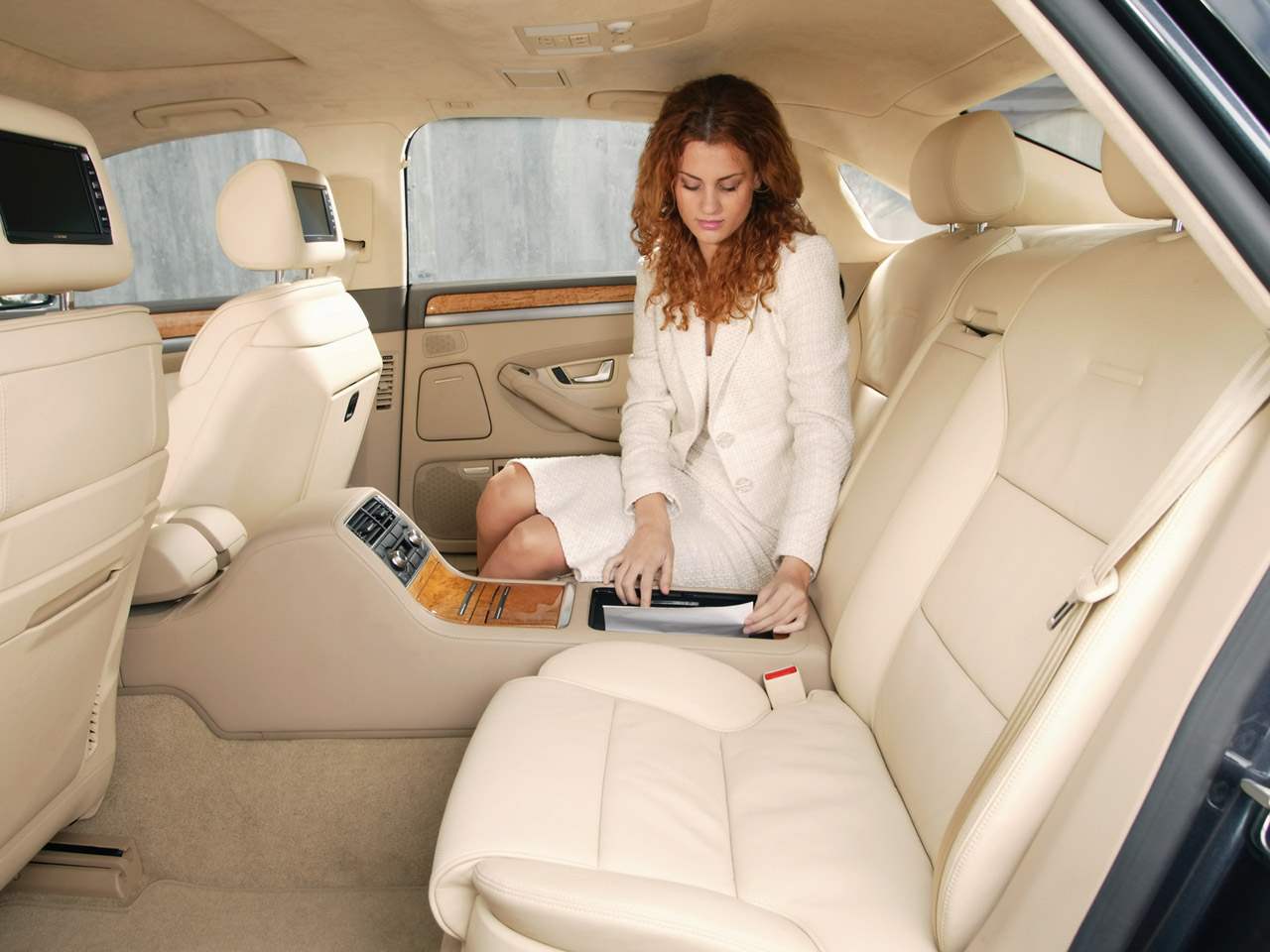 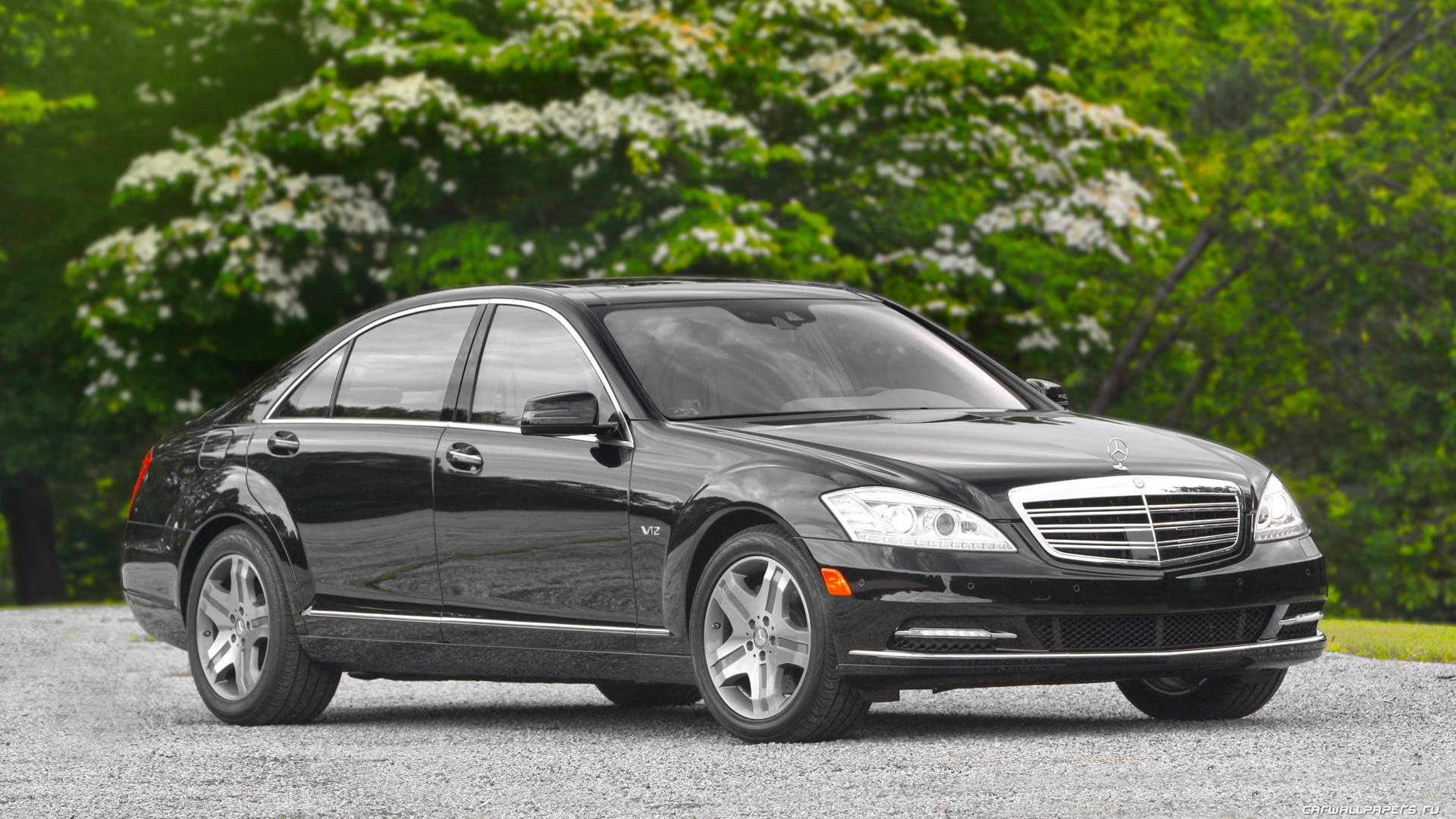 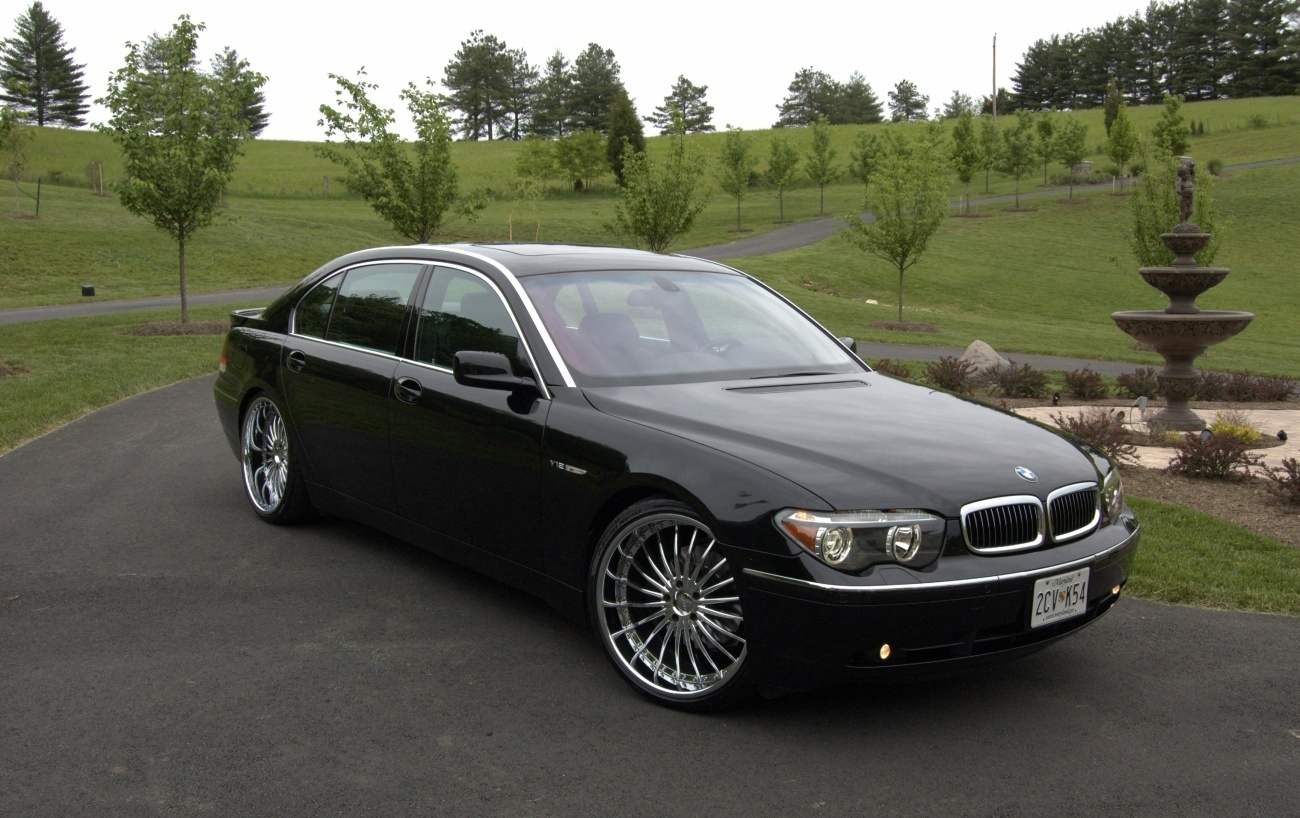 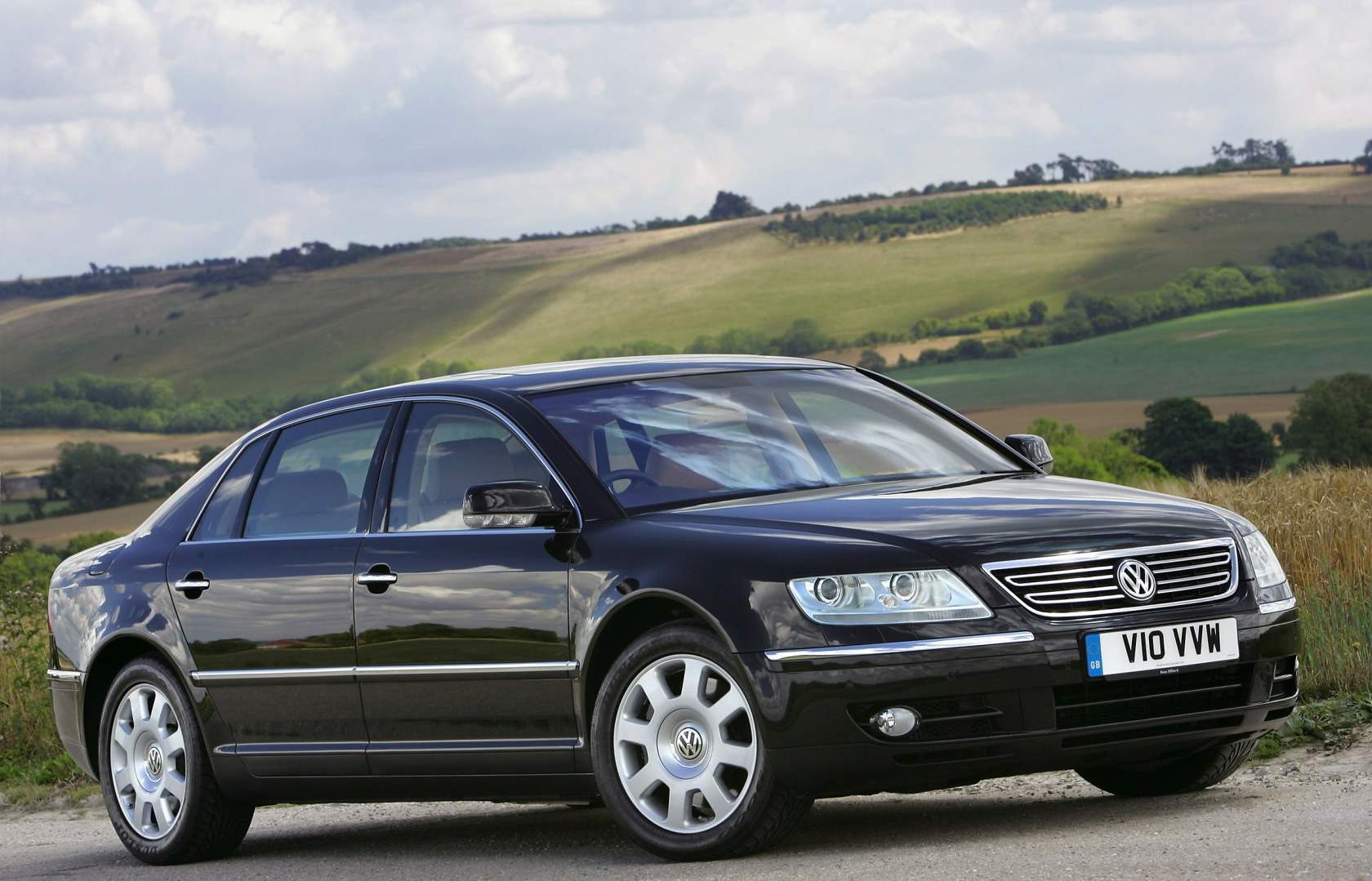 Main competitors and rivals of the AUDI A8 L 6,0 QUATTRO: MERCEDES-BENZ S 600 L (top), BMW 760Li (center) and VOLKSWAGEN PHAETON (below)
Judging by the appearance of new “six” AUDI, almost indistinguishable from “g”, so the front end will become the embodiment of corporate style of the company. Lights, “eight” is also new — a world first in machine technology was applied in the adaptive light with headlight daytime running light on the LEDs.
However, back to the interior of the car. Characteristically, in these machines the arrangement of the rear compartment is given special attention, and understandably so — because in the Executive car owner, usually not sitting behind the wheel. For him, the limousine has everything you need for business — built into a niche between the rear seats of the Fax to the system connect laptop.
The machine is equipped with separate climate control for rear passengers, chairs with plush headrests, which also features built-in elektromassazhery. In the most expensive of dinobot-Noah version of “eight” — split rear seats with elektroregulirovkami, DVD player, TV tuner, GSM phone and Fax built into the front headrest monitors.
Readers will probably be interesting to compare the new AUDI A8 L 6,0 QUATTRO with cars-odnoklassnikami in the same price category.
The first is to provide a car produced by Volkswagen-Audi — VW PHAETON. This is the “cheapest” of presenting here a group of cars— it costs “only” 123 700 dollars. However, this “people’s car” in its consumer qualities, is not inferior to the AUDI A8. Besides all-wheel drive transmission and power unit “Phaeton”, created in the framework of the group, almost the same as on the A8. List all kinds of electronic systems include ESP stability control, braking system with ABS, zatormazhivat and brake force distribution EBD and traction control system TCS. 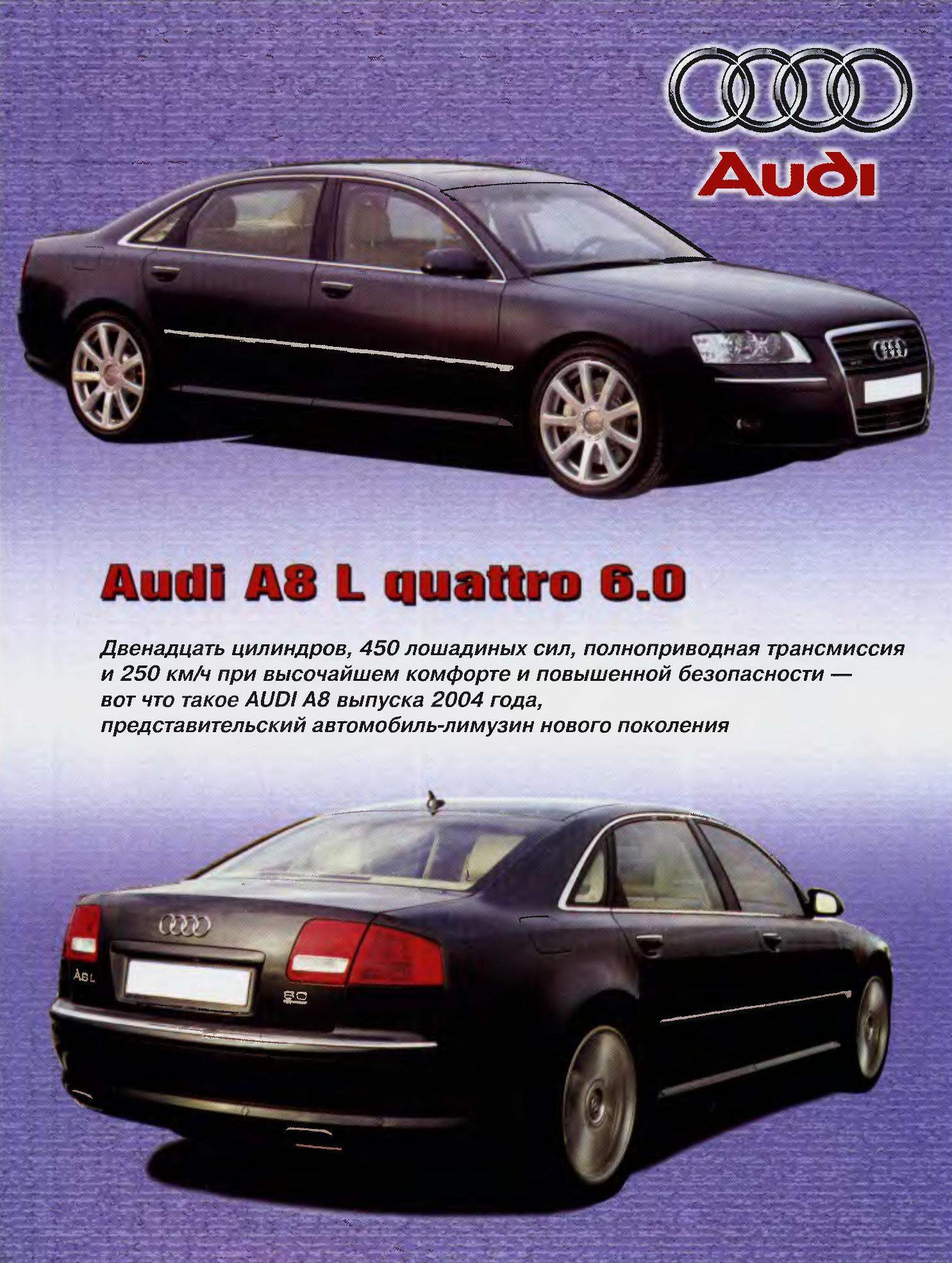 Significantly more expensive car is rear-wheel drive BMW760Li (it costs about 210 $ 500), which stands out classmates a distinctive and distinguished look, increased comfort, refined handling and excellent dynamics.
The most expensive of this Quartet is the German MERCEDES-BENZ S 600 L — for less than $ 217,000, a car will not buy. “Six” has an excellent reputation, and firmly holds the leadership in sales. Boasting the most powerful engine among the closest competitors, leads this group on the dynamics of dispersal. Like BMW760Li, “six” also has a classic — rear-wheel— diagram. The car has active air suspension ATRMATIC, and cruise control DISTRONIC automatically maintains distance to the vehicle ahead.
Technical characteristics of representational vehicles with 12-cylinder engines 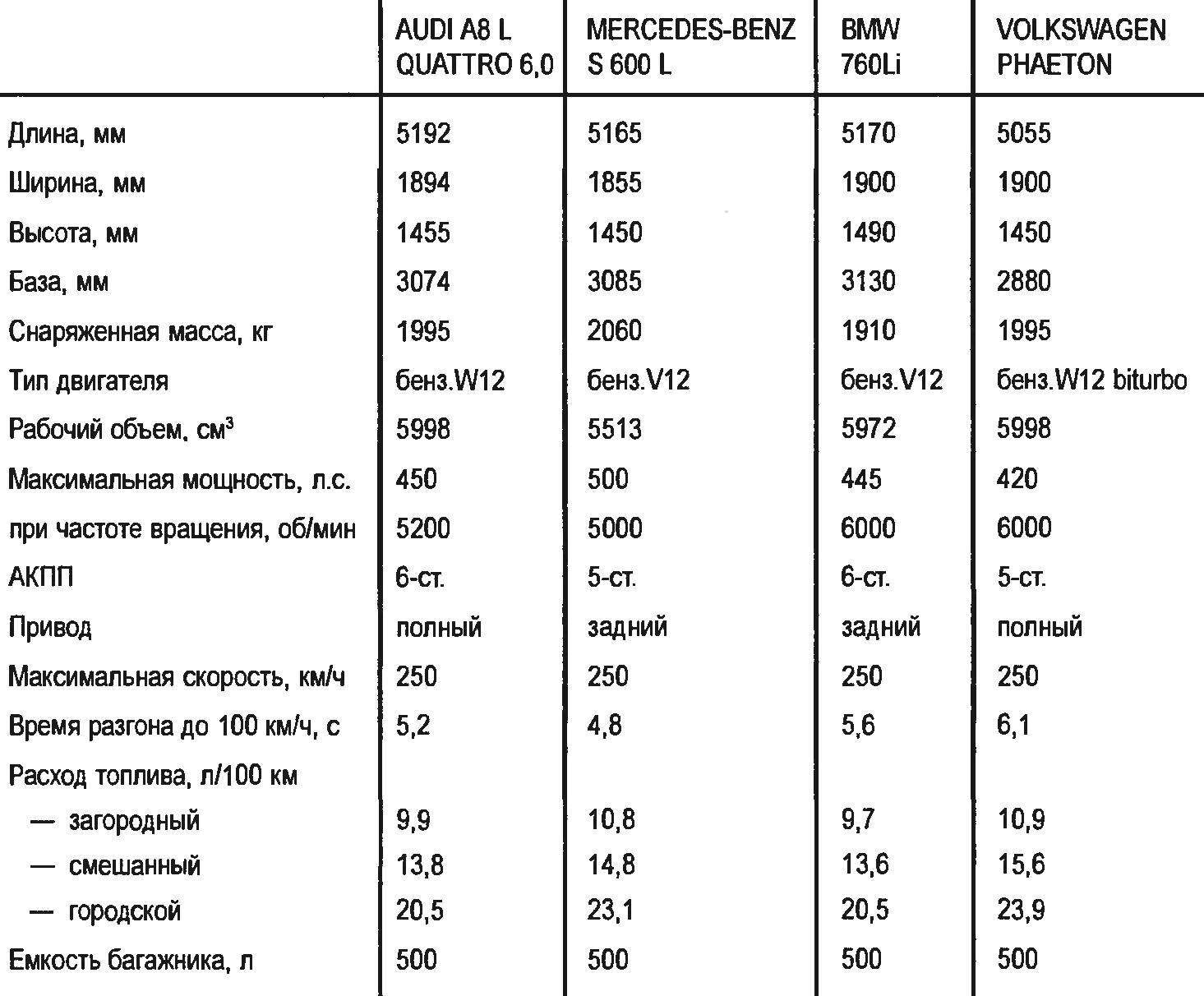 But let us return to AUDI A8 L 6,0 QUATTRO. According to dealers, long-wheelbase versions are already sold in the showrooms of the firm Audi and the standard version of the Executive car will appear at the end of 2004. As expected, the domestic market is expensive limousines will accept “eight” with considerable interest. Claim that orders for the machine began arriving in showrooms in early 2004.
Curious whether it deems a reasonable price 163 $ 600 those who marketers see as their main customer — “young successful businessmen that are in good physical shape and shows a lively interest in the most advanced technical ideas”? Of course, to predict the demand for such an expensive car only to professionals — because we are with you it is almost impossible to imagine ourselves choosing a luxury car from the four most prestigious German cars.
I. EVSTRATOV