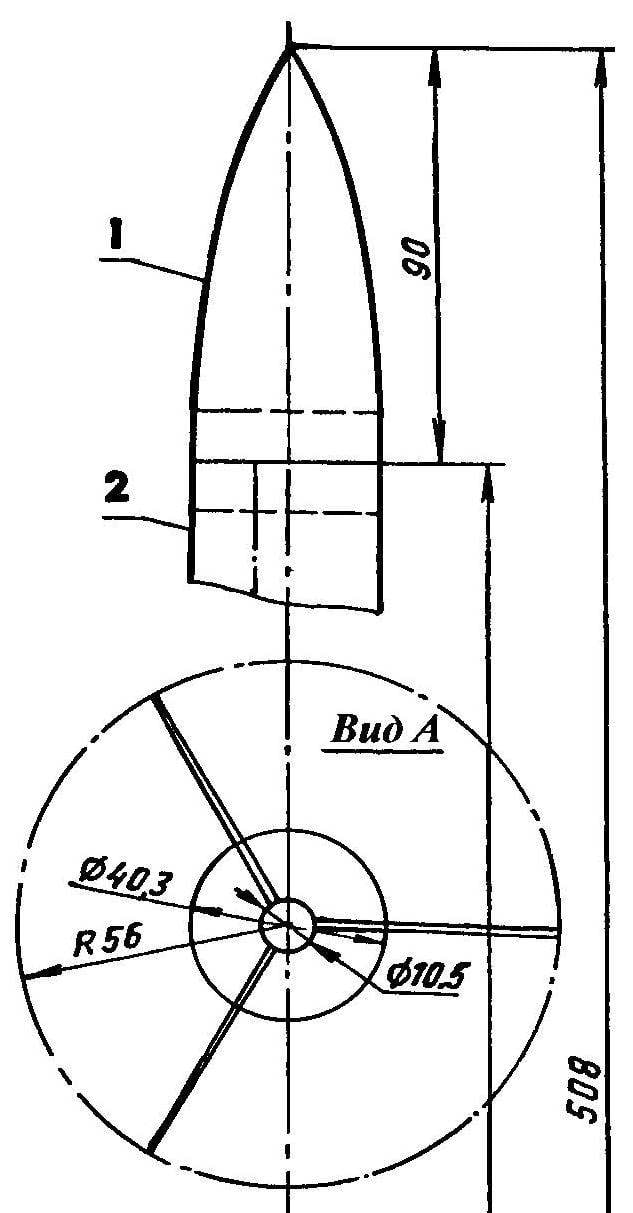 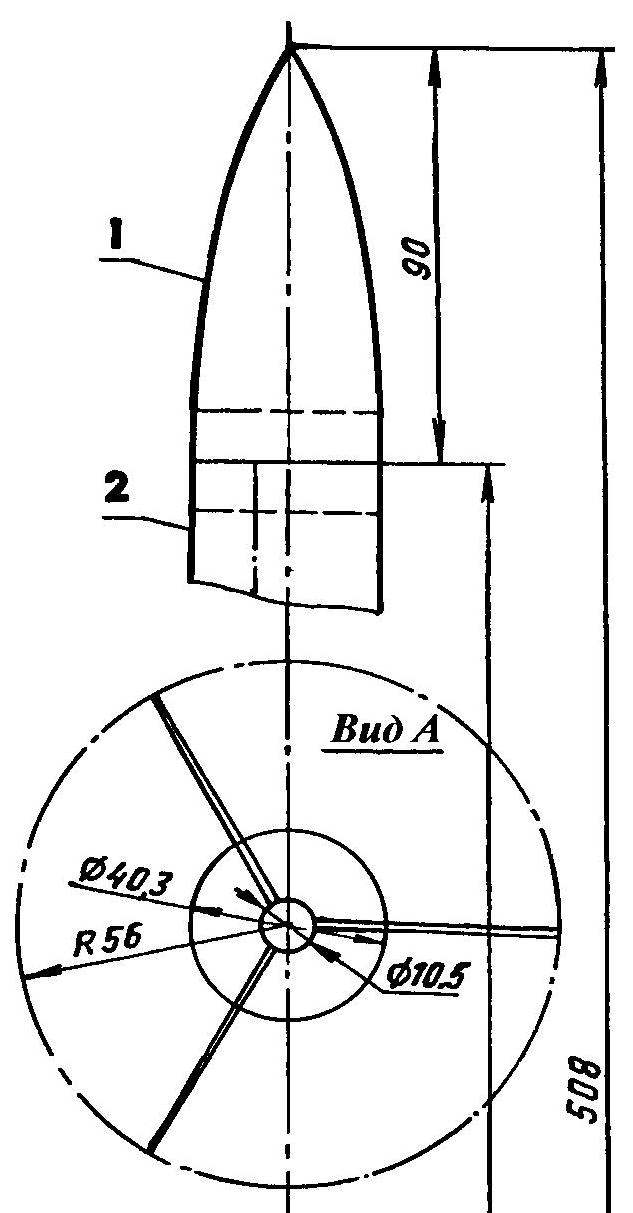 Model rotocut of the champion of Russia 2003 G. A. Reshetnikova — further improvement of “sergievskoe” scheme, developed in tstt “Youth” under the leadership of the deserved trainer of Russia L. O. Krasnov. This variant slightly increased the angle “V” pendant of the blades (12°) and has an additional corner of the “V” at the point of kink (folding), which promotes sustainable autorotation.
The primary element of the model of rotachute — lobed rotor. Its blade is balsa profiled plates with a width of 33 mm and a thickness of 2.5 mm. the Profile is PLANO-convex. Blade (three) — foldable, consists of a root and console elements, with a length of respectively 192 and 165 mm hinged together with strips of nylon fabric with a width of 30 mm, pasted on the lower surface. And on the top, at a distance of 30 mm from each other put two hooks for attaching the bands to the disclosure connected in a loop. Where you touch the gum the edges of the elements of the blade are reinforced with washers (pads) of celluloid.
In the free end of the root element of the blade attach the hinge — and-swivel hinge, made of cut steel wire with a diameter of 0.5 mm (a-axis), and bracket from strips of sheet with a width of 14 mm. “Ears” axis of glue on the bottom plane and the glueing reinforce with fiberglass. At a distance of 8 mm from the edge of the blade, drill a hole for the elastic return.
The rotor hub (glass) — fiberglass cylinder with a length of 21 mm formed on the mandrel with a diameter of 40 mm. above and below it paste two frames of balsa with thickness 2 and 4 mm, respectively. At the top make three notched cutout width 3.5 mm, angled 120°. And the bottom drilled three inclined holes of the channel for gum in the disclosure of the blade. To lower the frame and glue a pyramid to which is fixed a bracket hinge pivotally mount the blades. 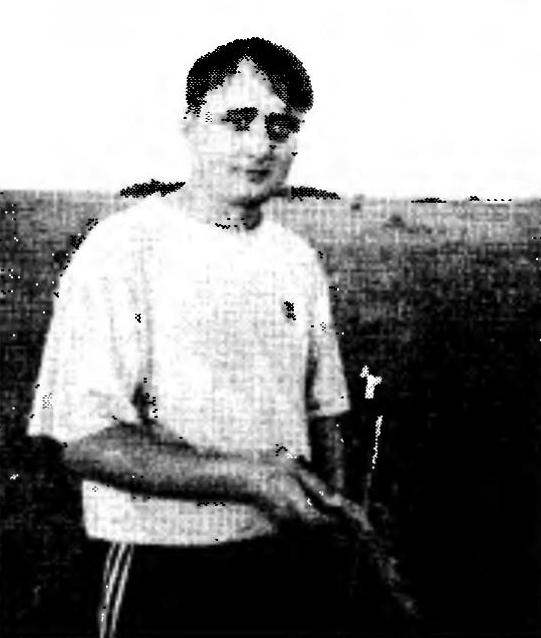 Champion of Russia, 2003, A. Reshetnikov
Through the webs of the hub are missing and glued the rod is a fiberglass tube with a length of 93 mm . In its upper end is fixed a small pin made of bamboo, and at the bottom put the hinge pendants — fishing vertljuzhok.
In the work, authorityrules position, the blade is retained due to the elastic return, passing through the cutouts and openings in the ribs of the hub and fixed at one end in the form of a loop on the pin rod and the other threaded through the blades, the ordinary node. Installation angle (inclination) of the blades is chosen empirically. On top of the hub is fairing and is fixed by three studs.
The container rotachute little different from the body regular sports model. On the mandrel with the largest diameter 40 mm and smaller — 10.1 mm subcaliber tube is formed of two layers of glass, of a thickness of 0.03 mm. Then it is treated on a lathe, polished and cut to the desired length is 412 mm. In the lower part of the body, at the transition of the tail cone in the engine compartment glued fake sleeve wall thickness of 1 mm and a length of 10 mm. It serves as a focus for MRD from longitudinal movement and protects this area of the body from burnout. This technology is made and the fairing on the mandrel arched form. 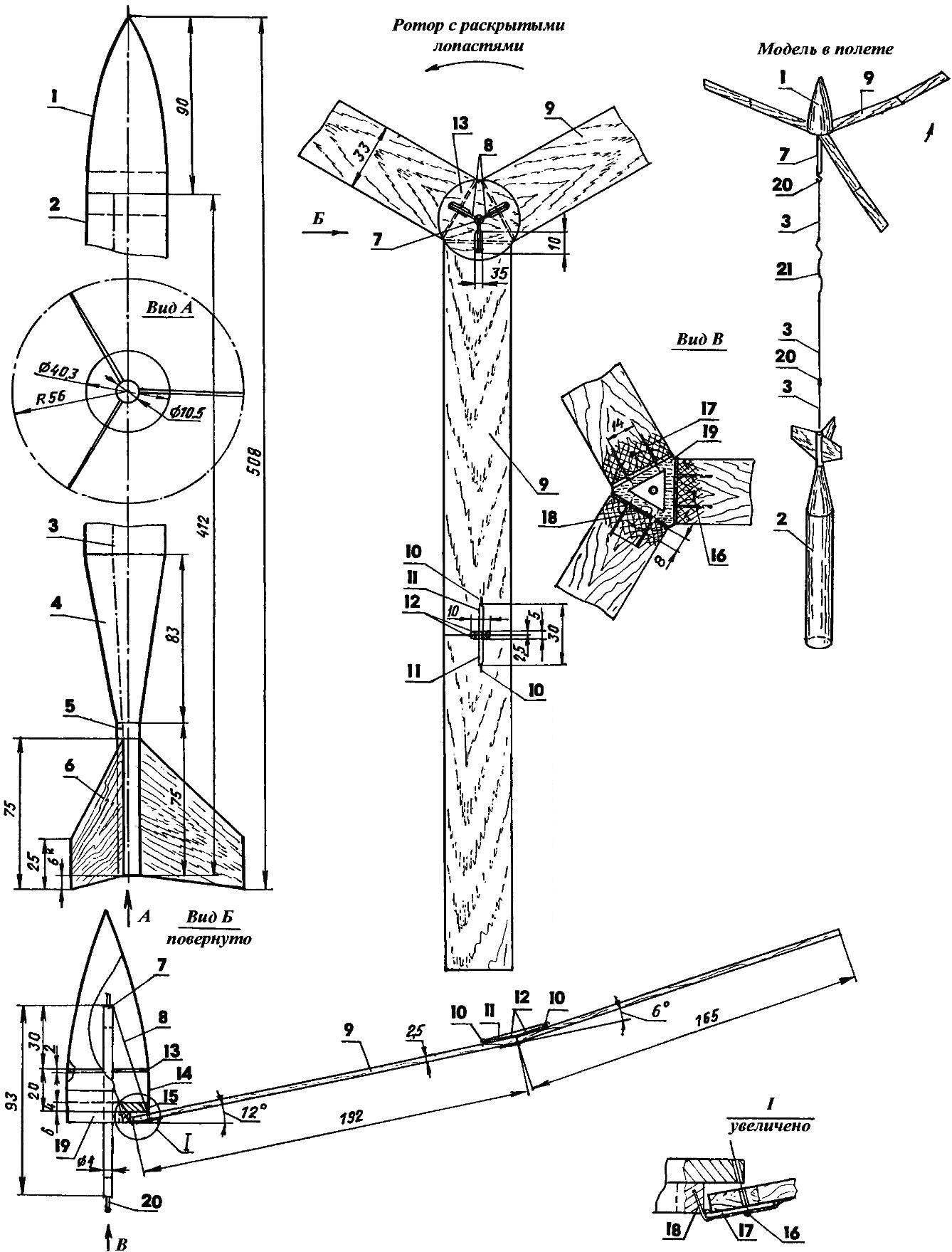 Model rotocut class S9B of the champion of Russia 2003 G. A. Reshetnikova (Sergiev Posad):
1 — fairing; 2 — the body of the container; 3 — strand pendants; 4 — tail cone; 5 — engine compartment; 6 — stabilizer; 7 — rod; 8 — elastic return of the blades; 9 — blades; 10 — hooks rubber bands disclosure of blades; 11 — gum disclosing blades; 12 — reinforcing plates; 13 — upper frame; 14—a glass; 15 — bottom frame; a 16 — node (lock); 17 loop of rotation of the blade; 18 — bracket loop; 19 — “pyramid”; 20 — bearing mount container (swivel); 21 — elastic damper
Stabilizers are cut from balsa plates with a thickness of 1.6 mm, profile and reduce the thickness at the ends to the size of 1 mm and then coat them with varnish and butt glue to the motor compartment. One of the stabilizers in the resin fastened with a thread suspension. Its other end was tied with a rubber damper to the bearing rod.
To start the model rotocut its blades folded. First bends down end-pieces, then stack folded blades along the vertical axis. In a container put the wad and put the folded rotor. Thus it is necessary to ensure that the suspension thread is not tangled in the blades.
After firing the lifting charge MRD folded rotor flies out of the container, and instantly reveals the blade. Judges can only to fix the result.
The mass of the model A. Reshetnikova without the wad and MRD -22 g.
V. ROZHKOV