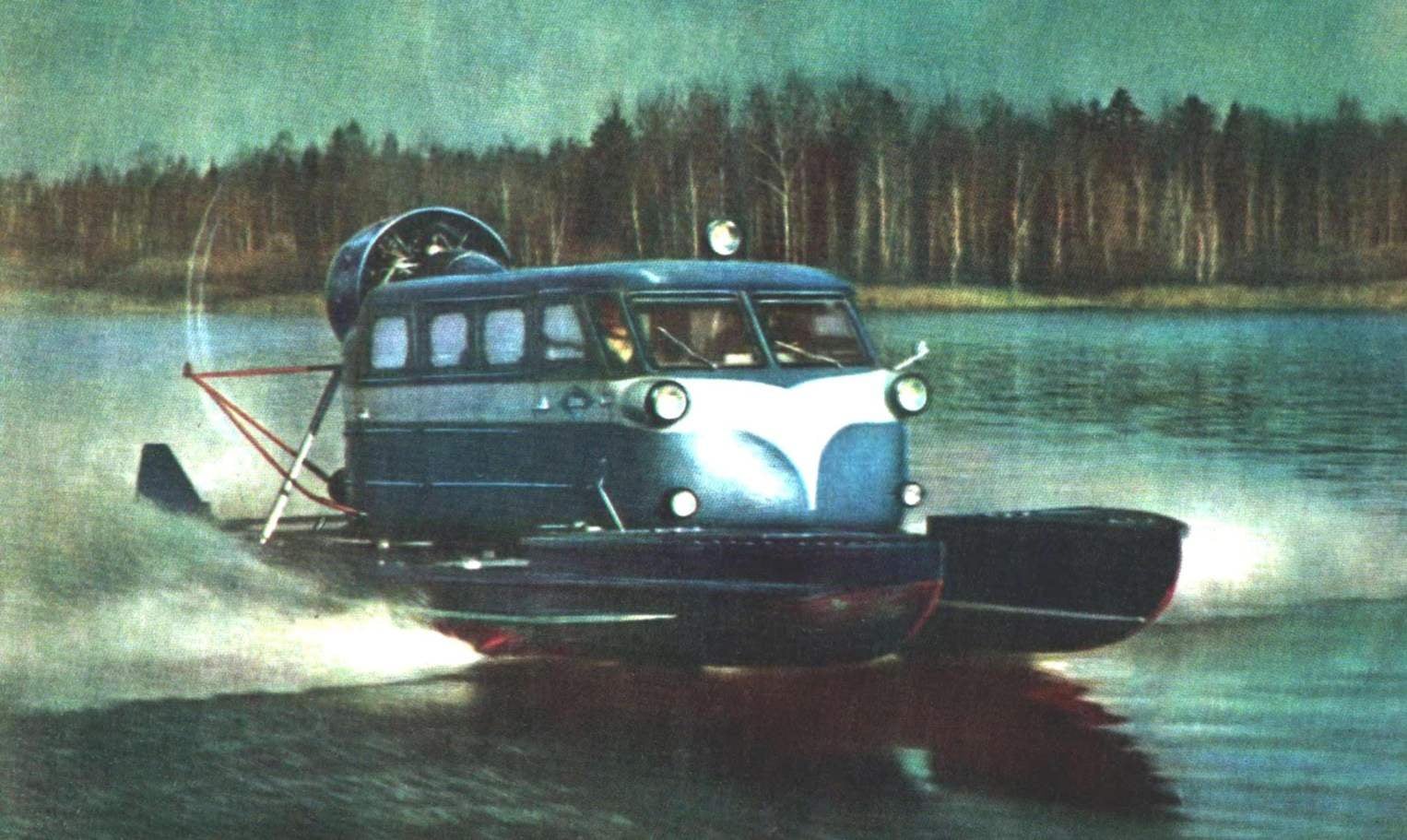 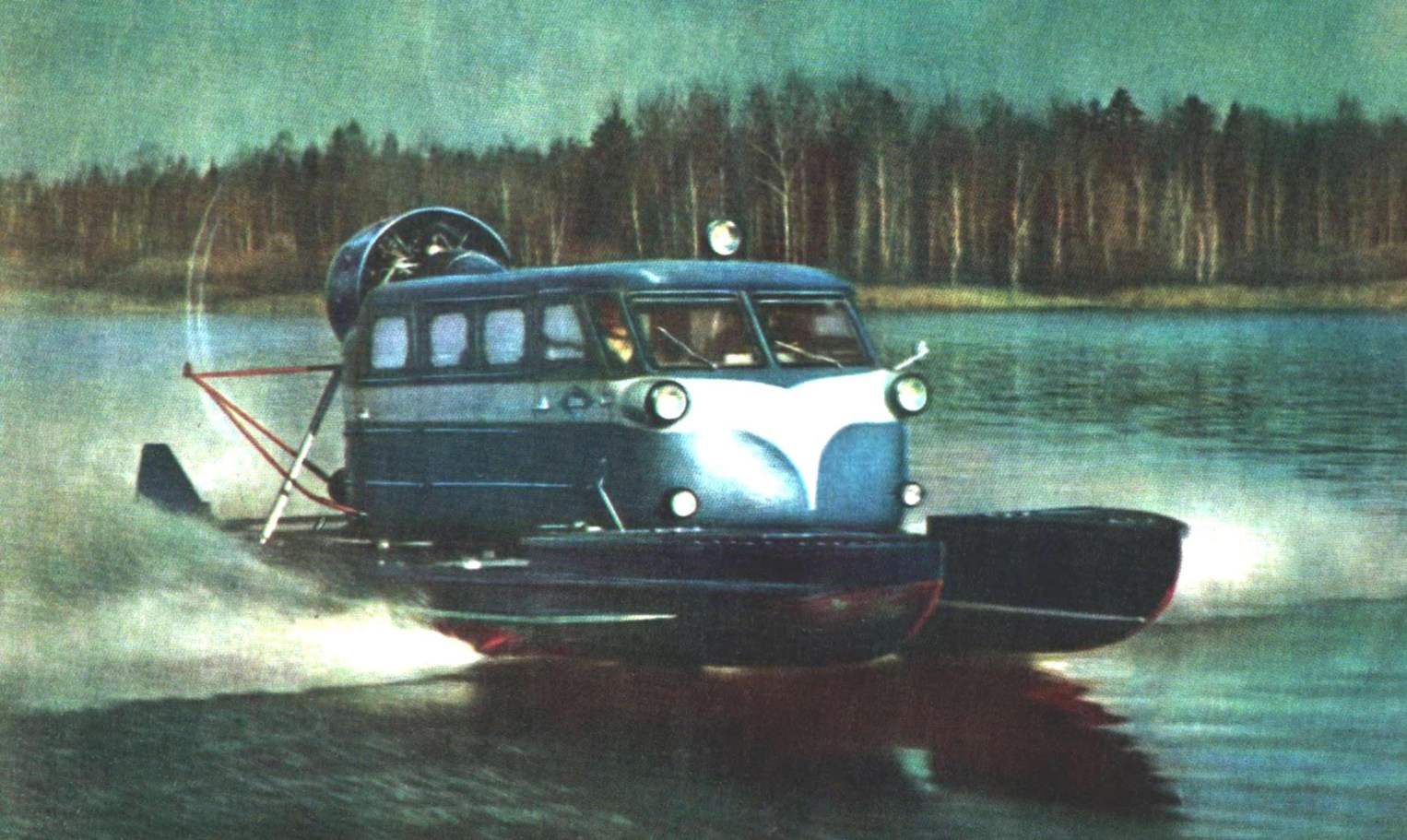 Nikolay Ilyich Kamov Is… to say it as I see numerous helicopters created under the guidance of this famous aircraft. This baby Ka-10, able to fly right out of the body “three-ton”, and the quadruple coaxial Ka-15, and the original scheme rotorcraft Ka-22, and a multi-purpose helicopter Ka-26… But the interests of N. I. Kamov is not confined only to creation helicopters. In 1957, at the request of the Ministry of communications of the USSR team CB started to develop a completely different machine — snowmobile. The first design, called “North”, resembled a passenger car, because it was created on the basis of the body of the famous “Victory.” It was chetyrehlistnyj snowmobile with an engine power of 260 HP in 1960, the first hundred of these machines started work on the carriage of mail.
Almost simultaneously with the launch of the sleigh “North” in a series of team N. I. Kamov got a new snowmobile with the index 30, with more versatile capacious body and high load capacity.
In the years 1962-1964 experimental batch of the Ka-30 was tested on the most characteristic for the future operation of the sled heavy tracks the basins of the rivers Lena and Amur.
Followed by sea trials on the Amur river from Komsomolsk to Nikolaevsk. The car “went” even in the Amur estuary, reaching the island of Baidukov and the Northern tip of Sakhalin. The total mileage of the Ka-30 during this time was approximately 20.5 thousand km. Snowmobile had to overcome deep snow and hummocky ice, working in freezing temperatures and bitter cold (down to -45°!), to climb the hillsides and down the snow-covered slopes. Average technical speed in these conditions was 45.5 km/h — extremely high figure! I should also add that payload to selected flights reached 1800 kg, exceeding the estimated three times.
The sea trials allowed the designers to conclude that the carrying capacity of the sled can be increased to 1200 kg. This meant that the range of use of the machine can be much wider. In the end, we developed several modifications of the snowmobile: passenger, ambulance, “ambulance services”, “technical assistance”. In addition, the designers have created a one — year option with floats to turn the car into a hydroplane catamaran. 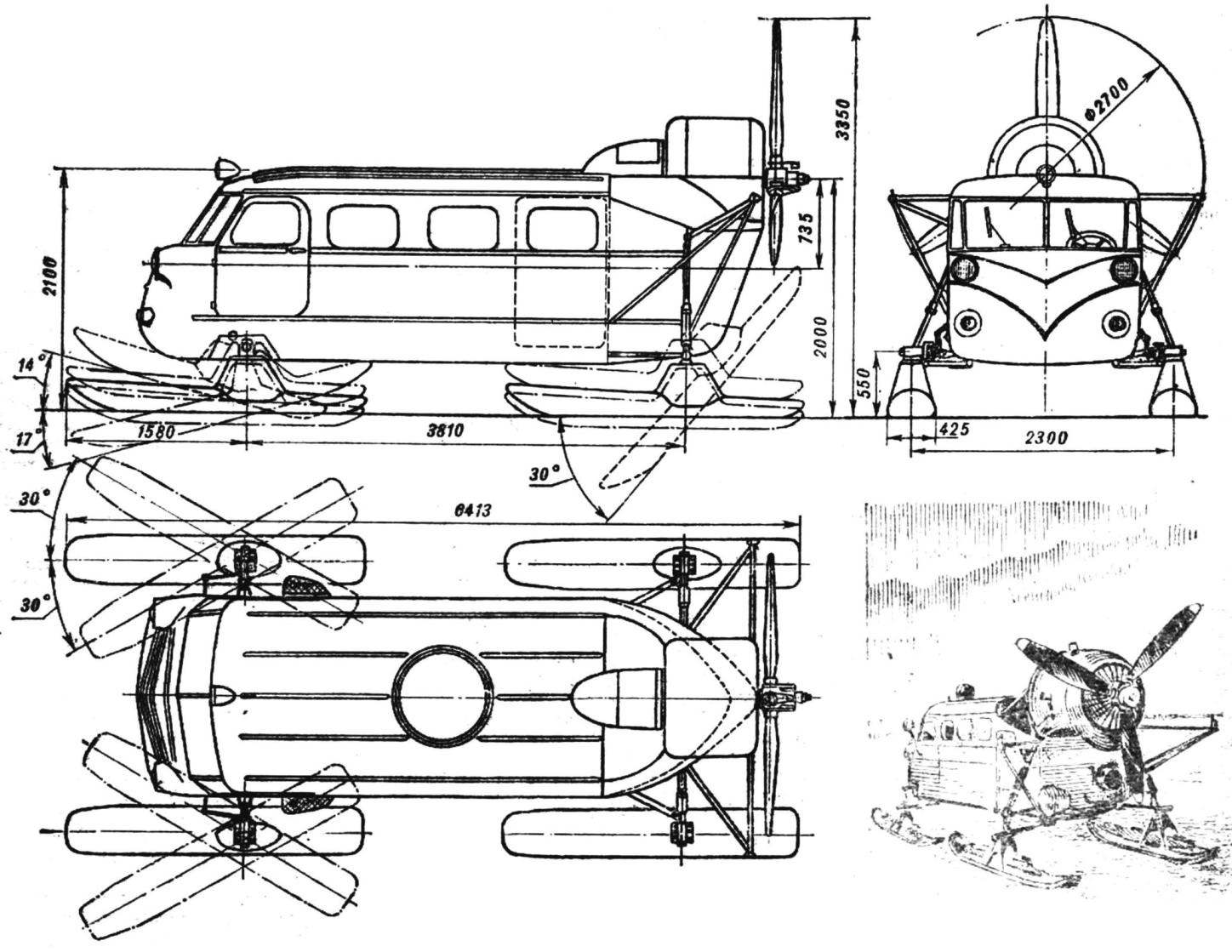 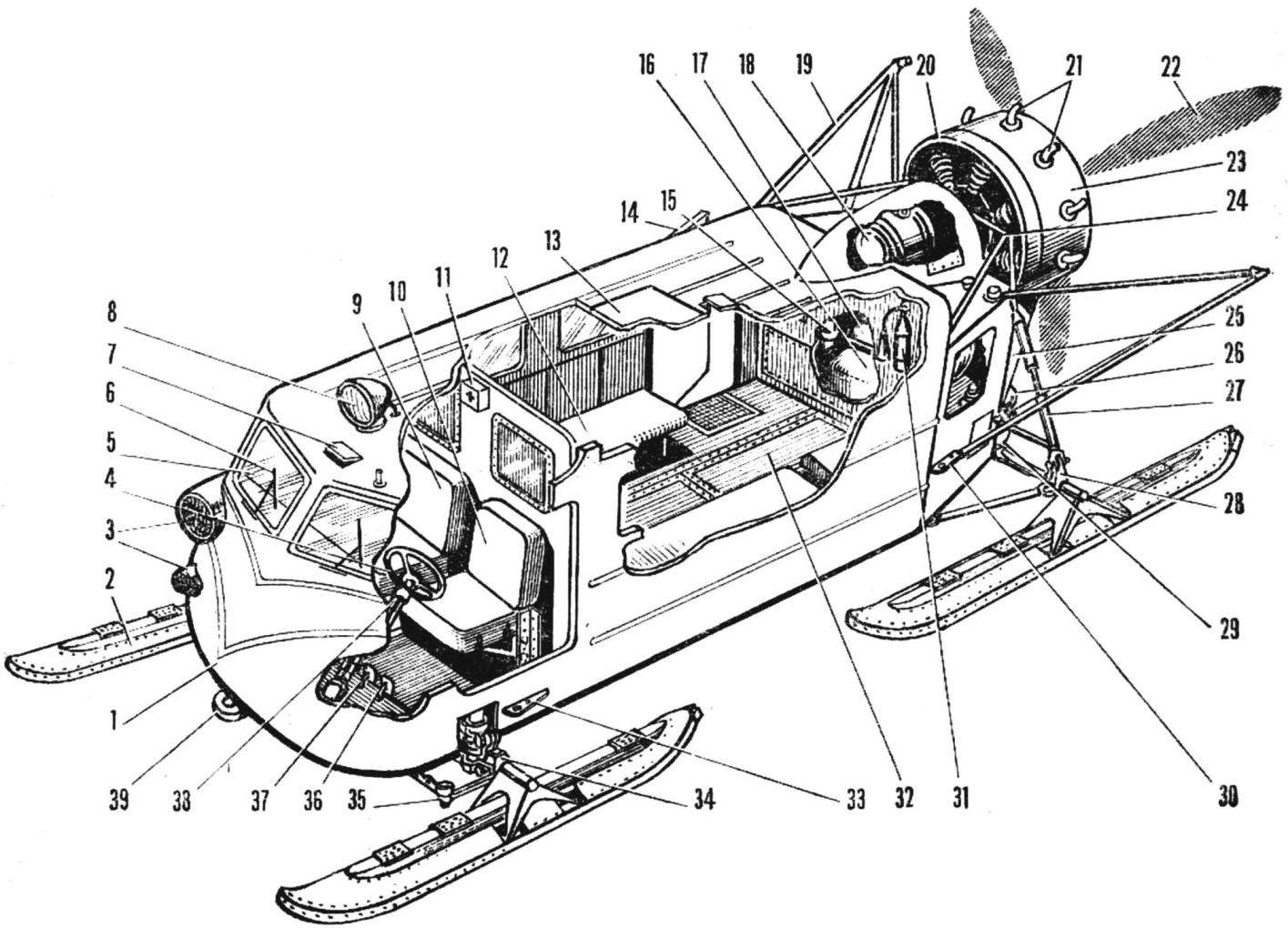 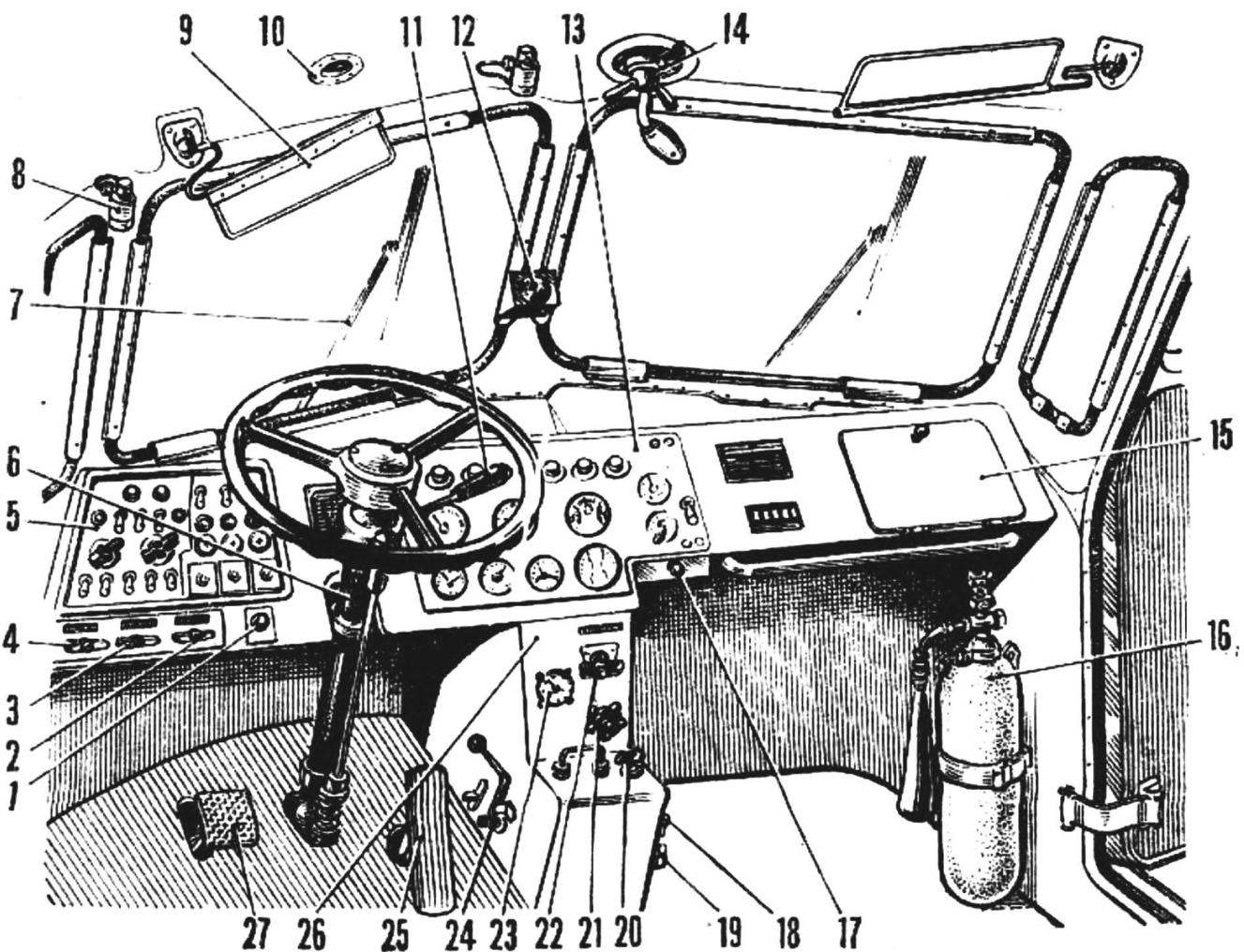 Cab driver:
1 — the siren button, 2 — stick control, a heated air inlet in the carb, 3 — blind control engine, 4 — blind control of the air-oil cooler 5 — ELECTROPULT run and atopica-Ley, 6 — steering column 7 — wiper, 8 — valves UV exposure scale devices, 9 — filter, 10 — thermometer, 11 — stick’ pitch control of the propeller 12, the compass 13 — dashboard, 14 — grip spotlight-seeker, 15 — lid for documents 16 — fire extinguisher, 17 — ashtray 18 — the crane engine start, 19 — check for injection fuel, 20 — pad pump, 21 — network fuel tap, 22 — handle, fire hydrants, 23 — air pressure gauge, 24 — handle of manual pumping of fuel, 25 — throttle 26 — remote start, 27 — pedal reverse propeller.
For snowmobile Ka-30 was selected chetyrehlistnyj scheme, with two front made manageable. The body of the machine — carriage type, enclosed, with large glass area.
Full metal, aluminum, riveted. The frame consists of frames and stringers. To get rid of cut at the joints of the frames and stringers, the latter placed outside of the hull.
The base body serves as a load-bearing floor, on which are mounted all the other structural elements and assemblies. In its Central part is through the length of the channel for communications cabling: control cables, pipelines, electrical cables.
The body is divided into three compartments. The first cab driver, where the machine controls, control devices, the driver and mechanics, and Autonomous heating system. The cabin has two doors — right and left. The bow of streamlined shape, with its outer side, the front, mounted the main and fog lights, and the b-pillar (along the axis of the machine) hinged spotlight-seeker with control from the cockpit. On the side of the front window is a thermometer aircraft type.
Under the windshield on the transverse beam placed dashboard, switchboard and control panel-rotor installation. Between fuse box and dash mounted steering column bracket. The air panel is positioned vertically to the right of the driver.
Inside the cabin is lined with heat and sound insulating panels with a decorative coating.
In the upper part of engine bulkhead separating the driver’s cab from the passenger compartment, there are two Windows. At the bottom of the frame on the driver side are mounting brackets for the driver seat. Mechanics seat made in the form of a box, inside which is placed a heating installation of the salons. 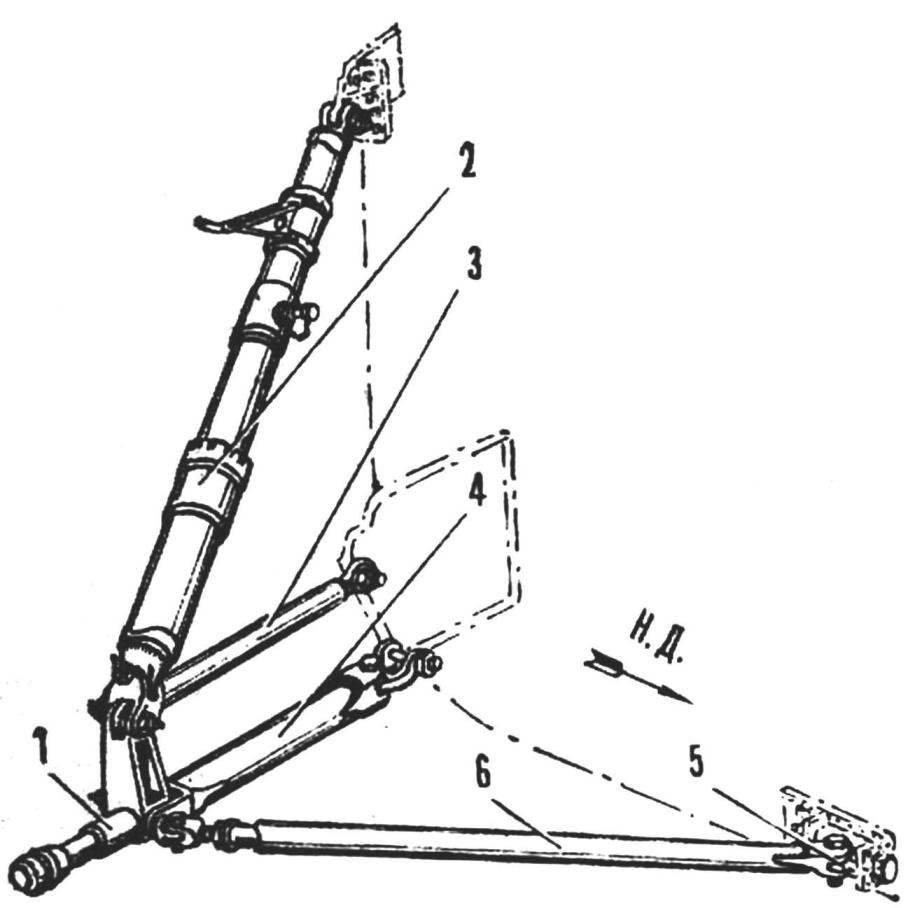 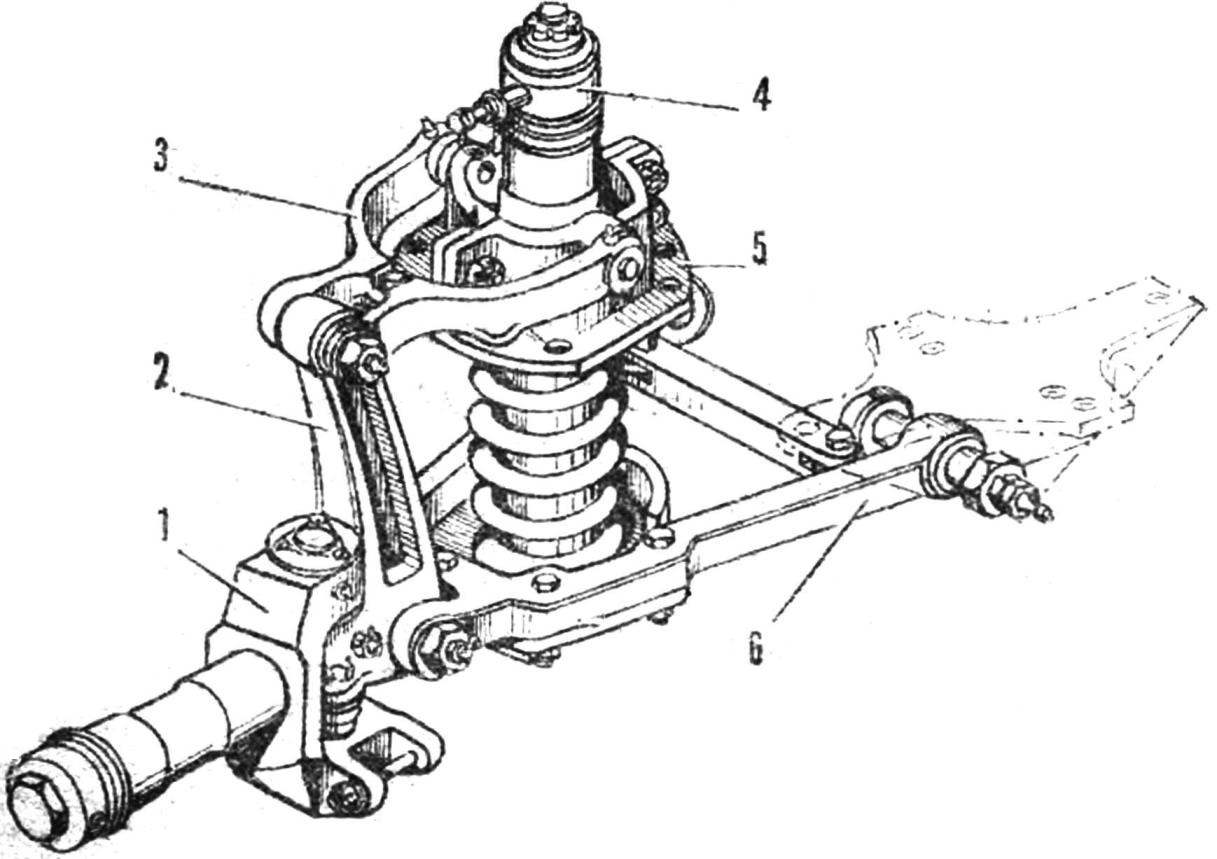 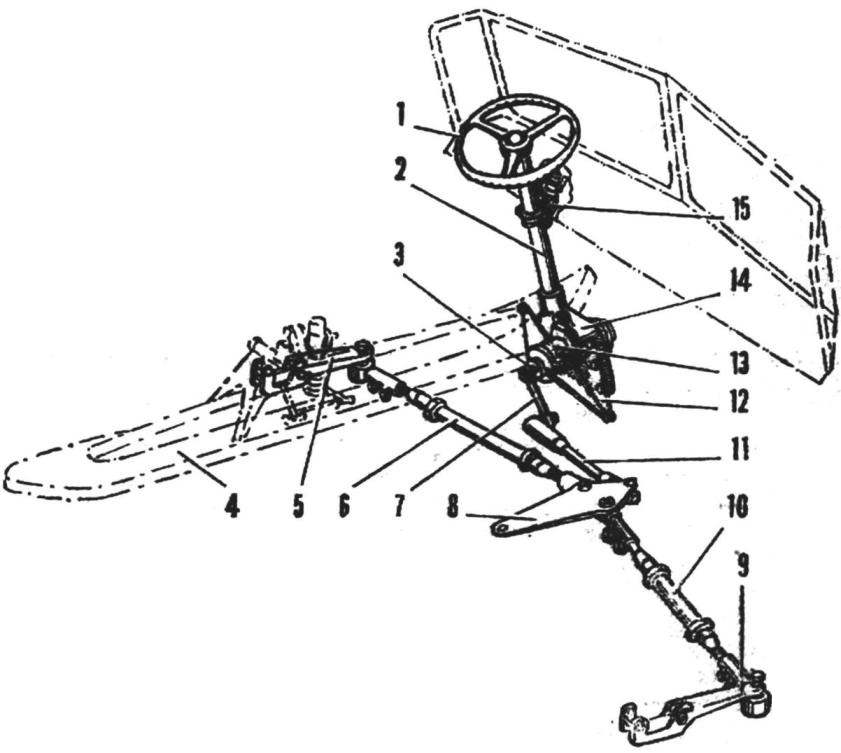 Scheme steering UPRAVLINNYA:
1 — steering wheel 2 — steering wheel, 3 shaft bipod, 4 — skiing, 5 — left arm, 6 — left tie rod, 7 — potatoes, 8 — pendulum-lever, 9 — lever right, 10 — of the right transverse rod 11 — low thrust, 12 — bracket, 13 — clamp 14 — worm gear 15, and the upper mounting bracket of the steering column.
The second compartment — the cargo-passenger. The volume — 5.5 m3. The sides of the compartment arranged folding passenger seat and in the floor mounted nodes to attach the cargo. On the sides of the glass, barred Windows, and on the right is the only one in this compartment door, the dimensions of which allow you to download even two hundred liter barrels. In the roof compartment provided an escape hatch.
Passenger compartment is equipped depending on the purpose of the sled. So, in the mail option on the left side is made in the form of a sofa lockable box for courier insurance mail, all the Windows get barred, and the front door can be locked from the outside. In passenger and sanitary versions sidewalls and ceiling of the compartment is lined with thermal insulation and decorative panels, the possibility of installing the stretcher. There’s a place for the primary and secondary fuel tanks, components of the air system. The front of the engine on the upper inclined casing is an oil tank covered with a fairing. For batteries, there are special baffle at the bottom of the compartment. Motor farm with braces the motor frame fixed on the power nodes located on the top of the casing and connected with the frame body.
The engine compartment is divided by a horizontal bulkhead. From below her on the lodgment secured the main fuel tank, and the top — optional. On the bulkhead on the right is a small enclosure in which is mounted a box electroridopuncture, there is stored an armored high-pressure hose air system. On the upper inclined casing compartment are placed the cradle and the base of the cone of the tank. The tank itself is attached to the lodgements ribbons and is covered by a fairing. Power nodes handling strut rear suspension, struts, engine farm and the hinge axle of the rear suspension of the skis are rigidly connected to the frame body and the floor. For the engine compartment are the pipes and control cables. The space behind it is closed with fairing.
Suspension of a snowmobile consists of suspension and skis. Two front — driven, they are interchangeable with uncontrollable rear. Ka-30 used romance in two types of welded steel and is laminated of fiberglass, and that the latter have a much longer life.
Each ski consists of a power and a removable plastic, PTFE or stainless steel chassis midsole, which forms the steel tape with the undercut. Paired with angular side profiles undercuts warn skids, make the machine running more stable. In the case of skis built the bracket by which it is mounted on the axle shaft suspension.
Independent suspension ski made according to the parallelogram diagram.
Control of the snowmobile is reduced to change of direction and speed. The first operation by turning the front steering skis via the steering mechanism. The angles of deflection of the ski relative to the longitudinal axis of the machine is ±25°. Control system — automotive type. Steering column worm reducer and fry, as well as traction control borrowed from the ZIL-130.
Powerplant snowmobile — nine-piston radial engine AI-14РС (gear, sledge). The reducer is made coaxially with the crankshaft. Engine power — 260 HP at the shaft speed of 2,450 rpm For better cooling between the cylinders of the engine are mounted the deflectors.
Propeller type AV-79, three-bladed, pusher, automatic changing of the pitch of the blades, reversible, Ø 2.7 m. the Blades are metal. 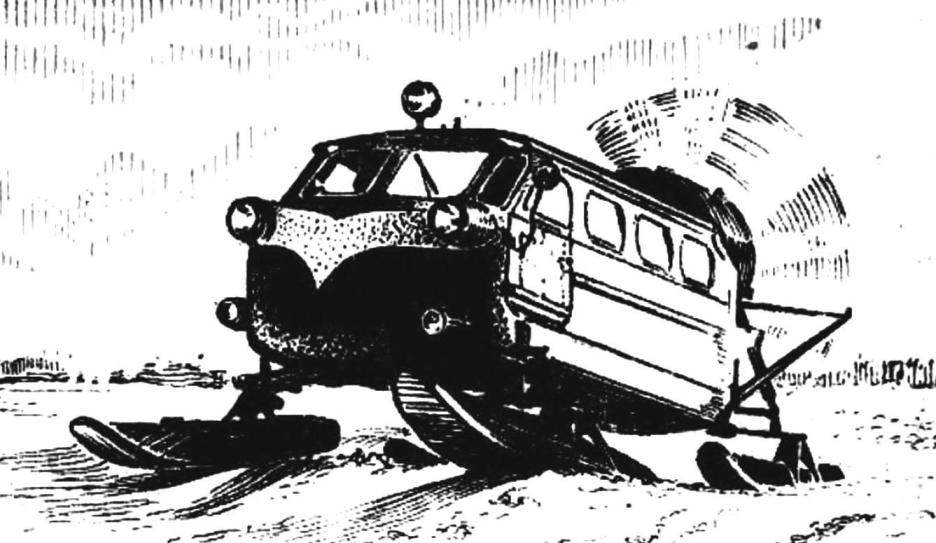 The engine hood is closed; the main purpose of this organization is the passage of air for cooling. The hood consists of front and rear fixed rings and legkookisljajushchihsja folds. The front ring has an extended entry, rear — folding shutters to regulate engine temperature.
Danger zone of rotation of the propeller fenced brightly colored tubular trusses, the ends of which are installed the Parking lights and the lights of illumination.