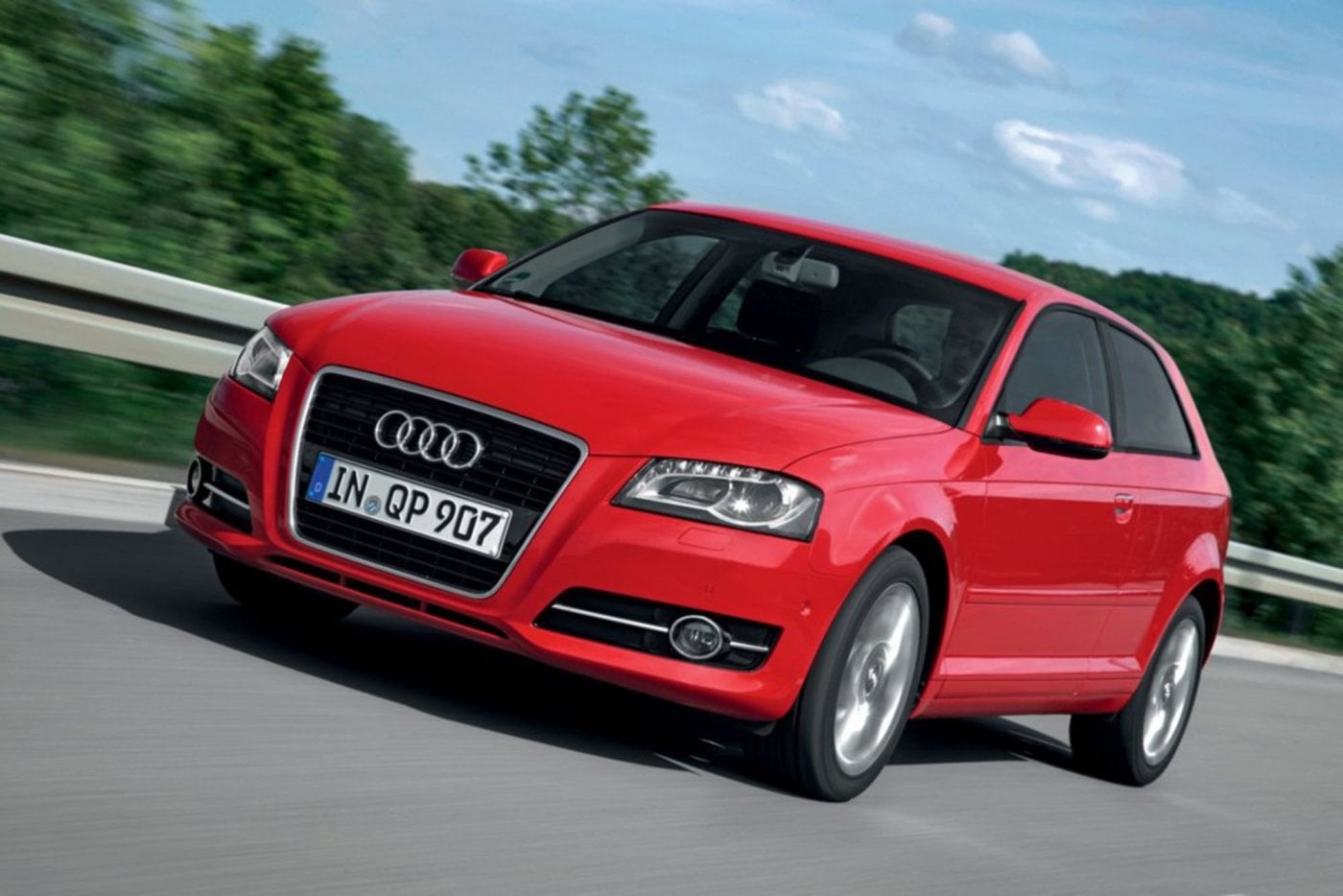 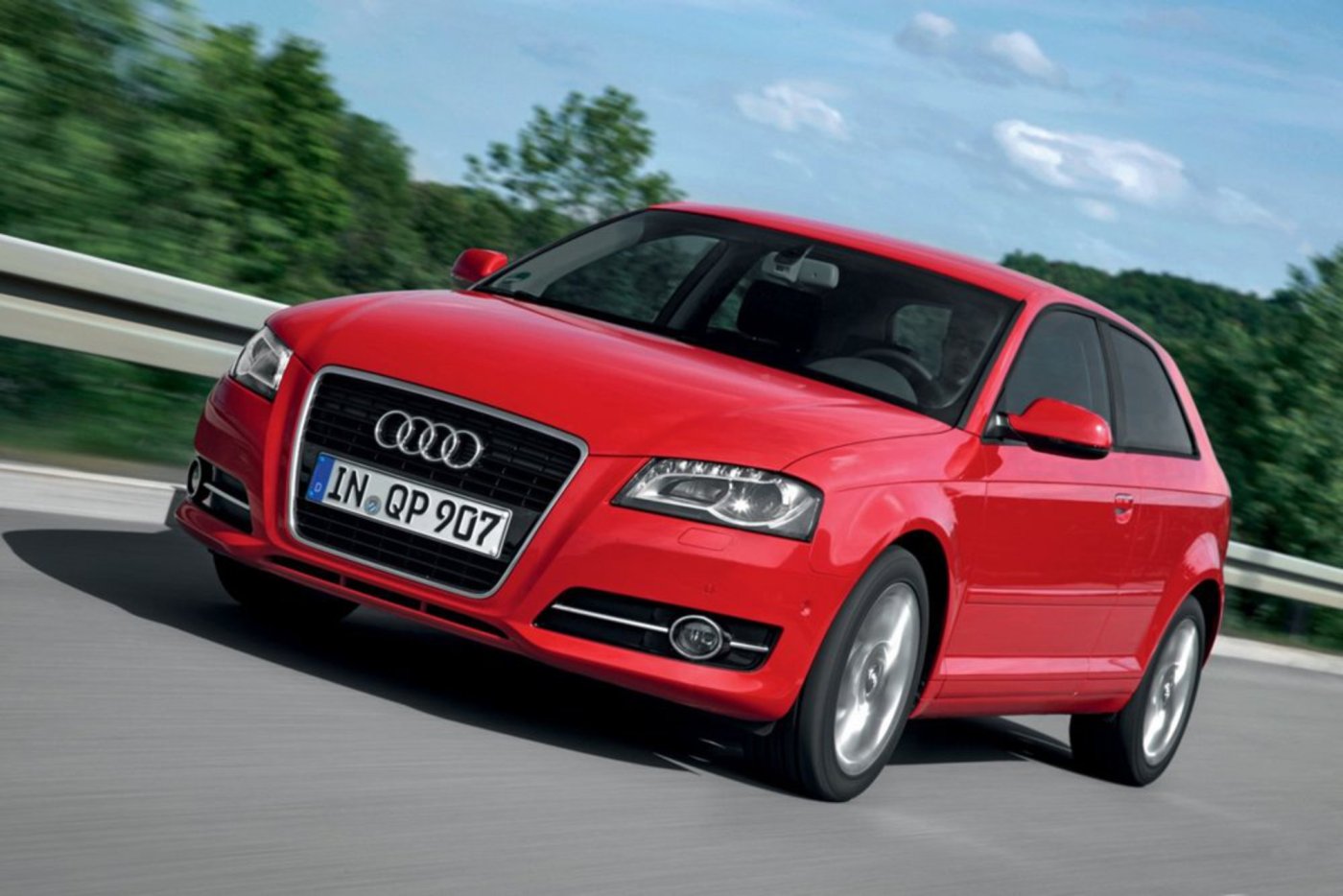 Car Golf-class AUDI A3 production in 2003. Not so long ago in the journal “modelist-Konstruktor” was published an article about a German firm Audi and one of the most interesting cars — AUDI A4 (see the “modelist-Konstruktor” No. 2, 2002). The article mentioned about other modern machines produced by this company, in particular, about the car-class Golf AUDI A3 1996 issue. Knowing the reader’s interest in cars of this class, more democratic compared to the expensive bourgeois “Quartet”, the editors assumed to tell the magazine about the AUDI A3. However, while we were collecting materials about this model, the firm is prepared to release a brand new “three” — AUDI A3 2003 issue. However, to write about the new car, comparing it with its predecessor, was even more interesting.
We should start, perhaps, from the fact that in the mid 90-ies, pragmatic and considered that in the near future will become the most massive car of a Golf class, many European and American companies dumped on the market a number of such models, thus providing the buyer a choice of five or six of almost identical cars. Involved in this process and the firm Audi — “Troika” in 1996 turned out to be quite successful and if you do not know the year of its release, it could pass for a model today. However, customer demand is a capricious thing: while the main competitor of the “Troika” Volkswagen Golf fourth generation was produced annually over one million copies, Audi cars AZ from 1996 to 2003, was released only 875 thousand copies. According to experts, the reason for this was not the level of technical excellence of the car and not forgetting the marketing policy of the company — just about every fruit must ripen. The only downside of the AUDI A3 was a big, than competitors, the value of the car, but the quality, the attractiveness and condition, have caused the price was significantly higher than cars of firms-competitors.
In the process of developing a new model AUDI A3 firm was invited to head the design centre of the famous Italian designer Walter De’silva, previously held the same post in the firm Alfa Romeo. Through the efforts of the master of the three-door hatchback not only got the looks of a sports coupe, but has taken a typically sports character.
A new car has increased by 53 mm in length and 30 mm in width, the height of the car has decreased by 10 mm. And the wheelbase of the new “Troika” has increased by 65 mm to maintain the optimal gap between the heads sitting in the car and the roof, the chairs had to project below. By the way, this position allows the driver a better feel of the car when performing high-speed turns. 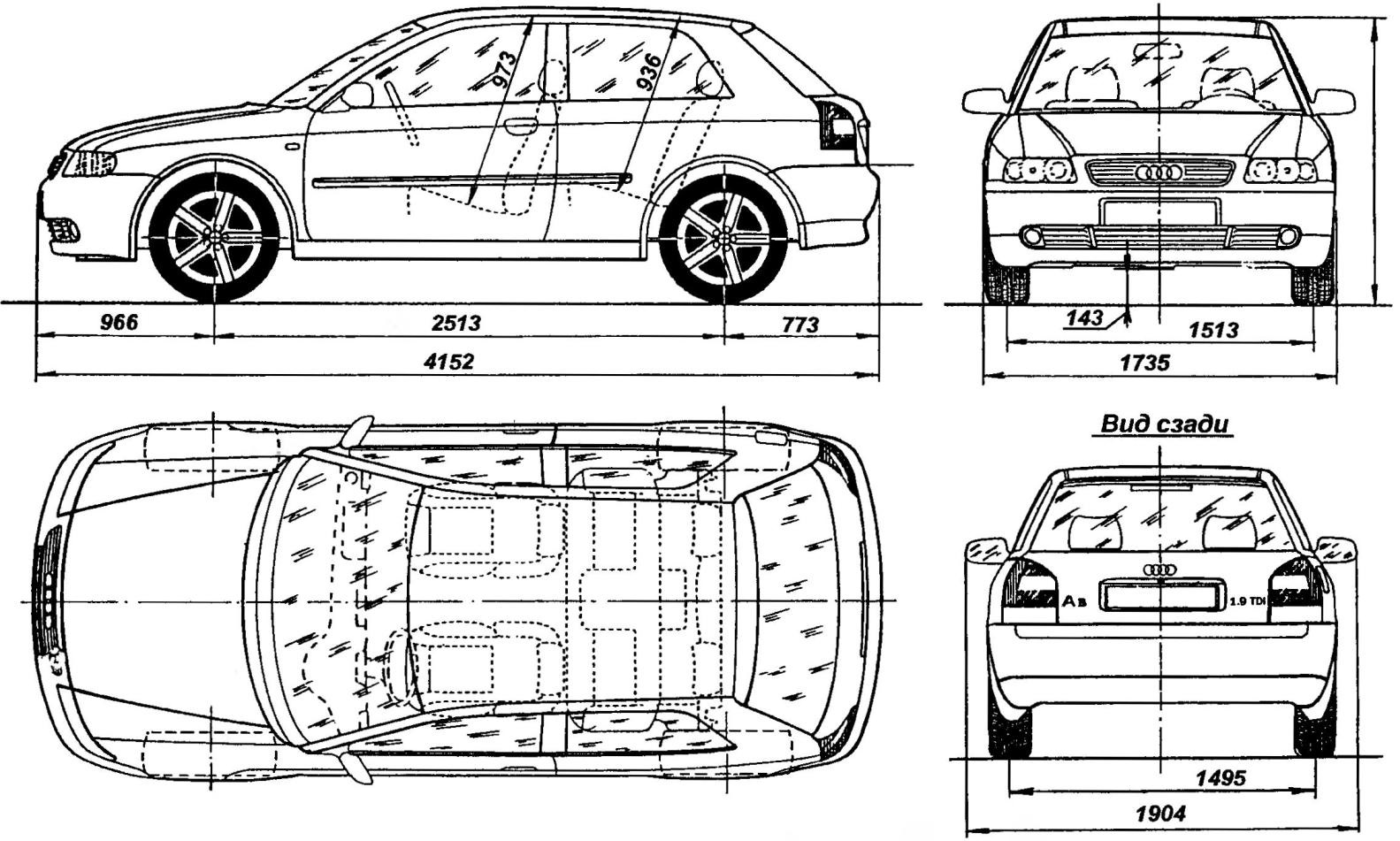 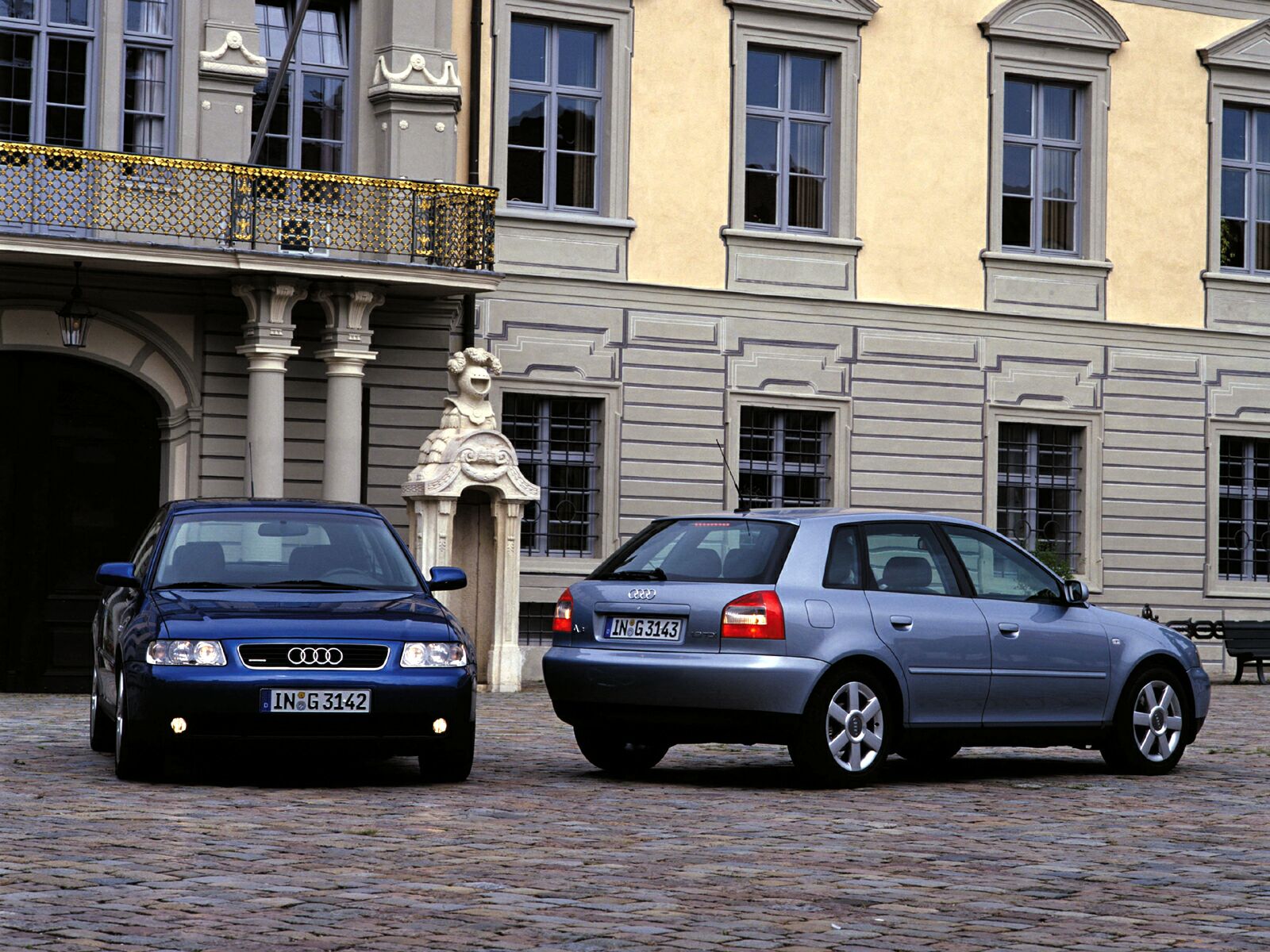 AUDI A3 1996 issue
Car chassis made by designers in accordance with the most advanced trends of the automotive industry, used more often in more complex and expensive models, the business class. In particular, the new “Troika” is used independent multilink rear suspension, allowing the suspension to unify front – and all-wheel drive cars (note that the old model used a suspension with the associated levers). In addition, for front-wheel-drive version uses a subframe out of steel, and all-wheel drive quattгo — aluminum alloy. Unlike the previous version, all the wheel bearings of the “Troika” of 2003 made integral with the hub. For connoisseurs of cars we will note that the development of suspension dealt a major expert on these nodes in W. Eichhorn, known for creating a very successful multi-link system for FORD FOCUS. In the design process the focus team William Eichorn paid to the optimal distribution of longitudinal and transverse loads on the respective levers.
McPherson-type front suspension was also upgraded to increase control precision of aluminum sub-frame is rigidly attached to the body, anti-roll bar attached directly to the spring racks and the silent-blocks of levers attached non-linear characteristics.
An interesting novelty of the new Golf platform was the electric steering, which in recent years steadily thronging the actuators, which are today on many machines quite familiar. By the way, in comparison with the predecessor, amplifier, with electric helps to save fuel. Characteristically, the new Audi A3 motor through reducer connected directly with the steering rack, not the steering column, as is done on most vehicles. Such construction of the actuator is used to increase the control accuracy and improve the informativeness of the steering wheel. Electric power works as follows: the sensors send to the onboard computer the data about speed of turning the steering wheel and force on its shaft, as well as information on vehicle speed; the computer, in turn, determines the degree of “interference” of the actuator in the control process. In addition, the electric power compensates the parasitic force on the wheel due to the crosswind or an inclined road profile. 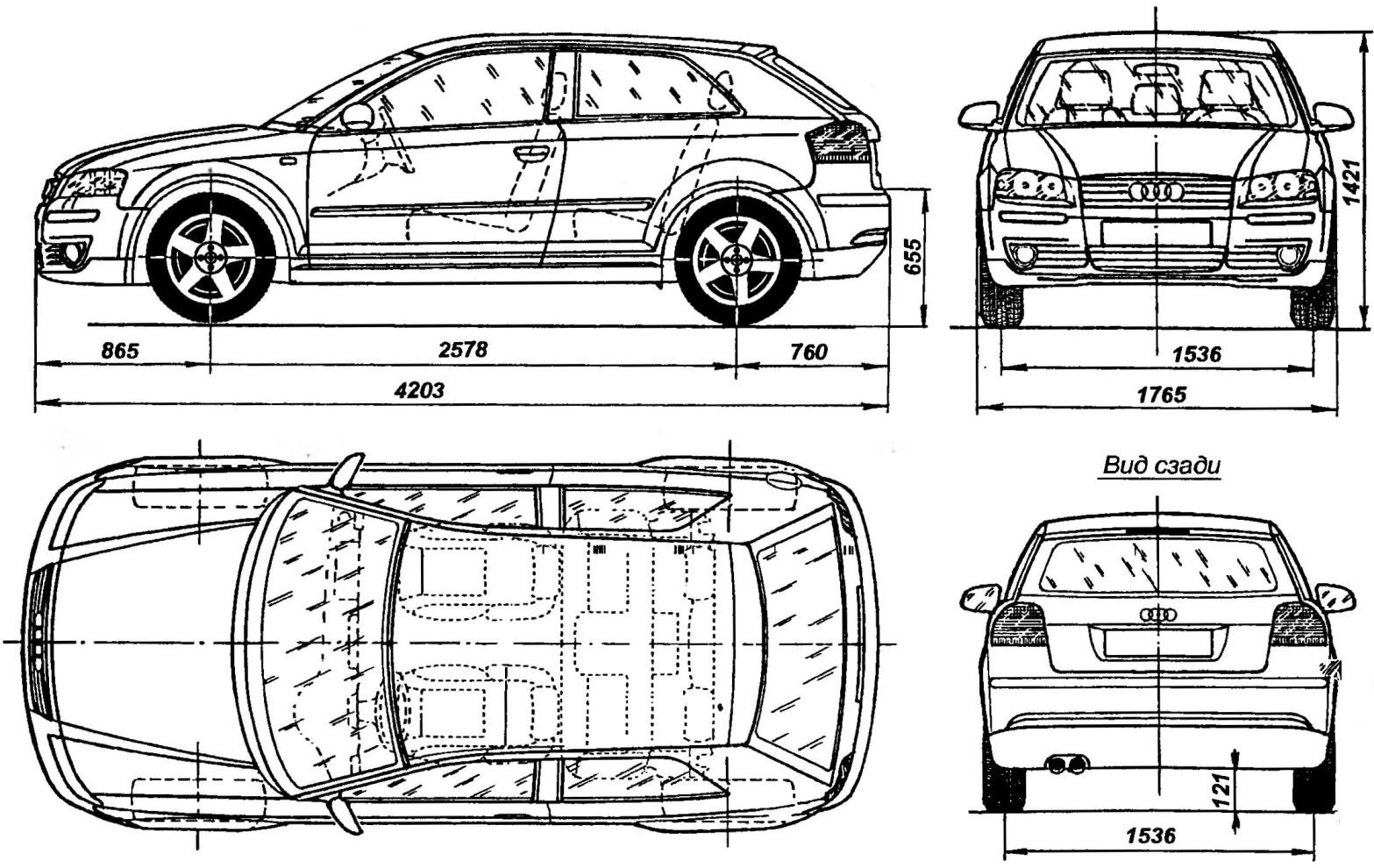 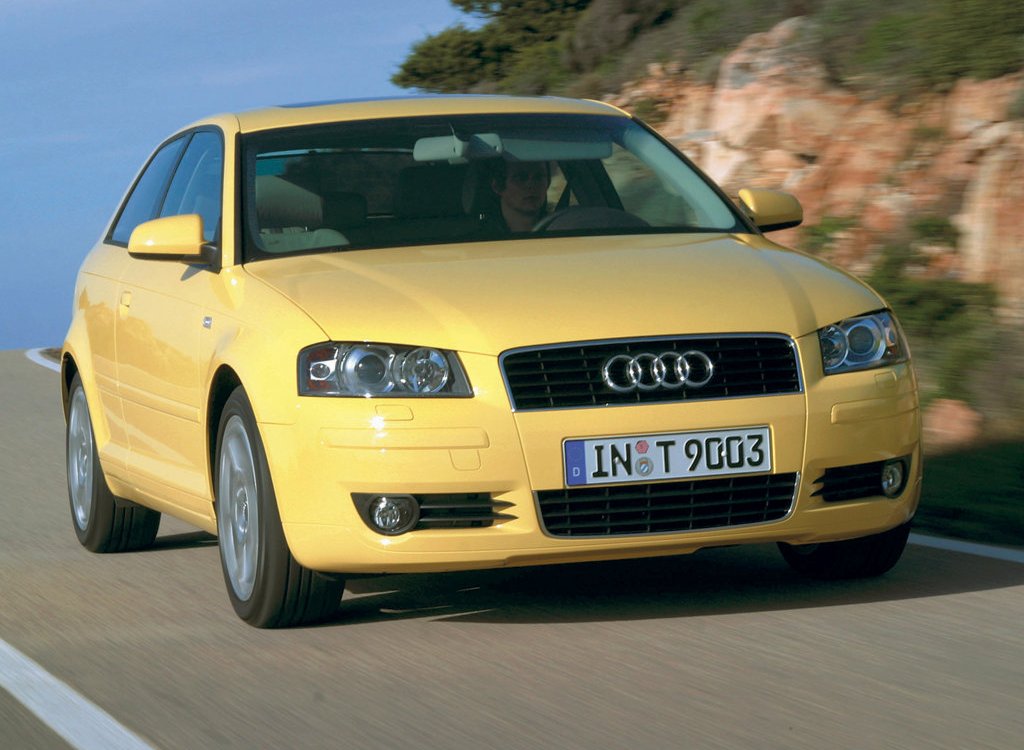 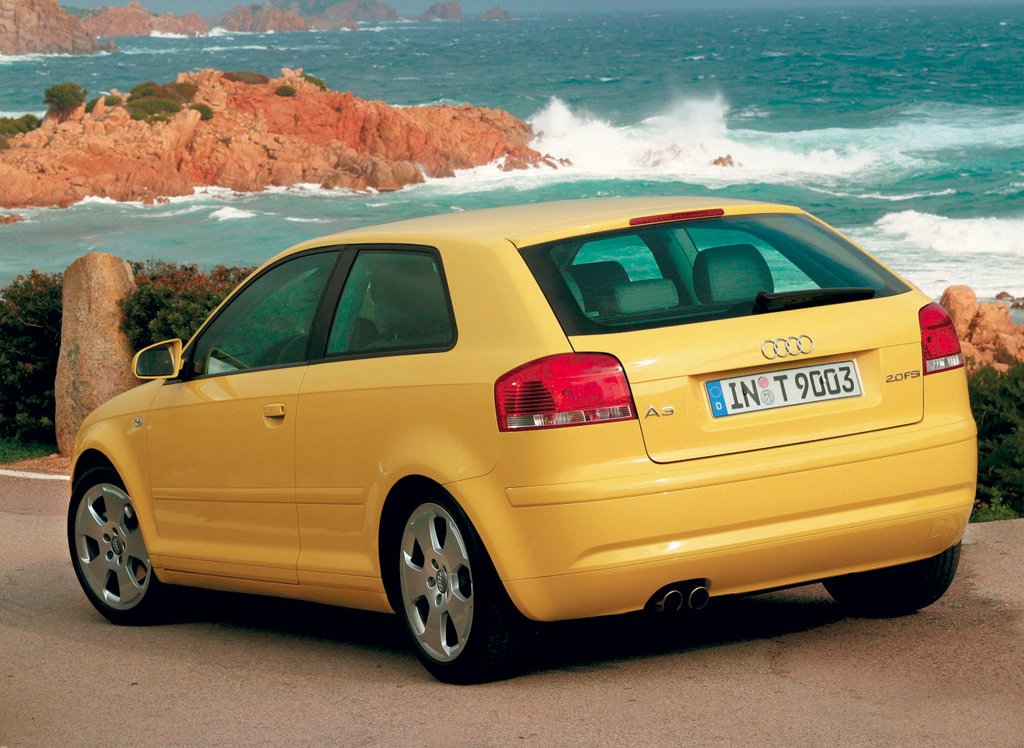 AUDI A3 2003 issue
The machine comes with a range of engines. So, the base model is inherited from the old Troika petrol four-cylinder 1.6-liter engine with multipoint injection 102 HP
Much more serious seems to be more modern two-liter engine 2.0 FSI new generation system with stratified direct injection (Fuel Stratified Injection). The motor has considerable constructive complexity — it is equipped with the intake manifold of variable length, balancer shafts, a device for adjusting the phase of the intake.
Of great interest is the direct stratified injection, allowing the engine to operate in two basic modes. In the first, at high loads, fuel is injected into the cylinder during the intake stroke. In the second mode is used at idle and at partial loads injection is performed in compression stroke. Interestingly, in the second mode, the mixture in the cylinder is non — uniform around the candle, thanks to the specific shape of the bottom of the piston and a special guide flaps in the intake manifold is formed a cloud of a mixture of optimal composition, and the cylinder walls the mixture is lean. This greatly increases the efficiency of the engine — but at the expense of its environmental performance. And to meet strict limits of toxicity, the car was equipped with three converters, two of them being directly integrated into the exhaust tract, and the third is designed to absorb oxides of nitrogen. Latest Converter periodically “burns” them during special sessions of short-term treatment in the supply of enriched mixture. It should be mentioned that the compression ratio is 11.5, and it works only on gasoline with an octane rating of 98. 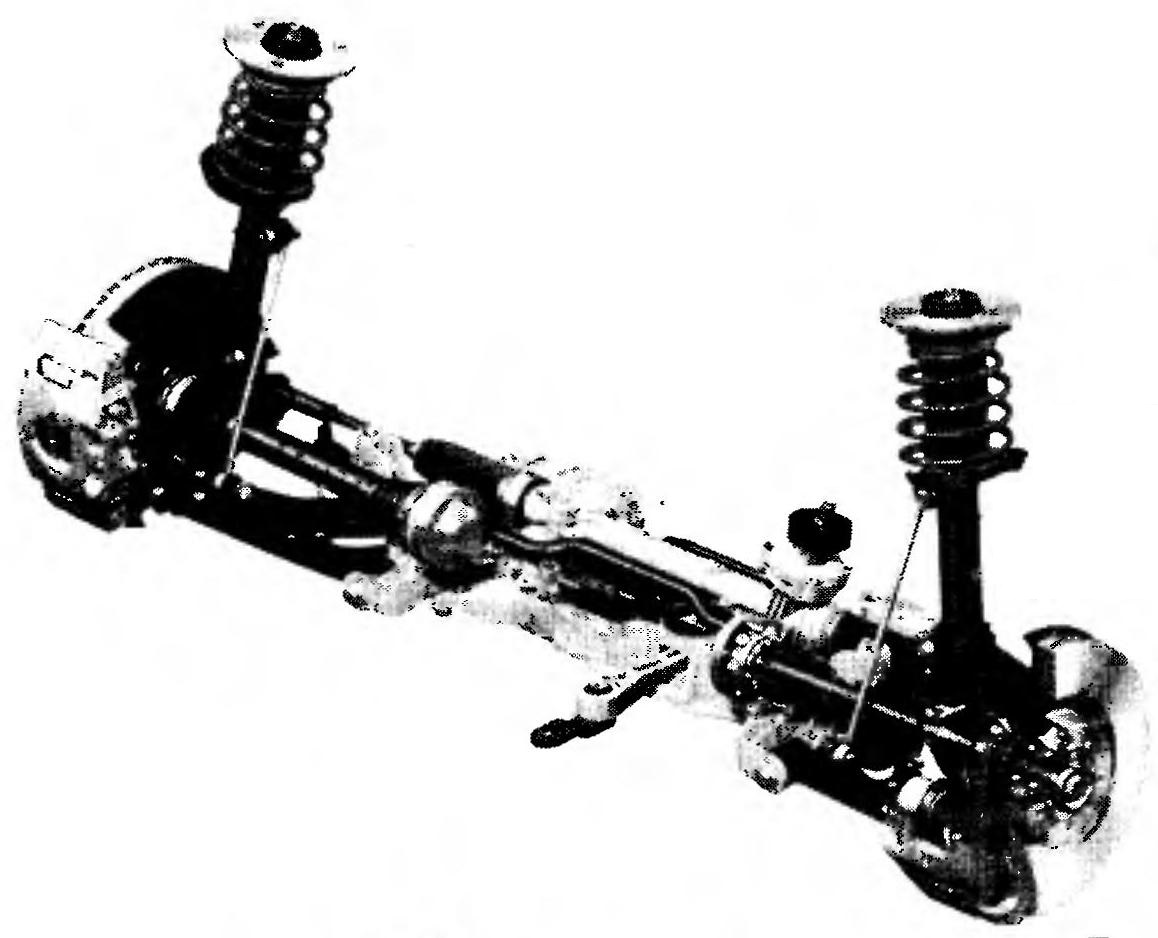 The front suspension of the car 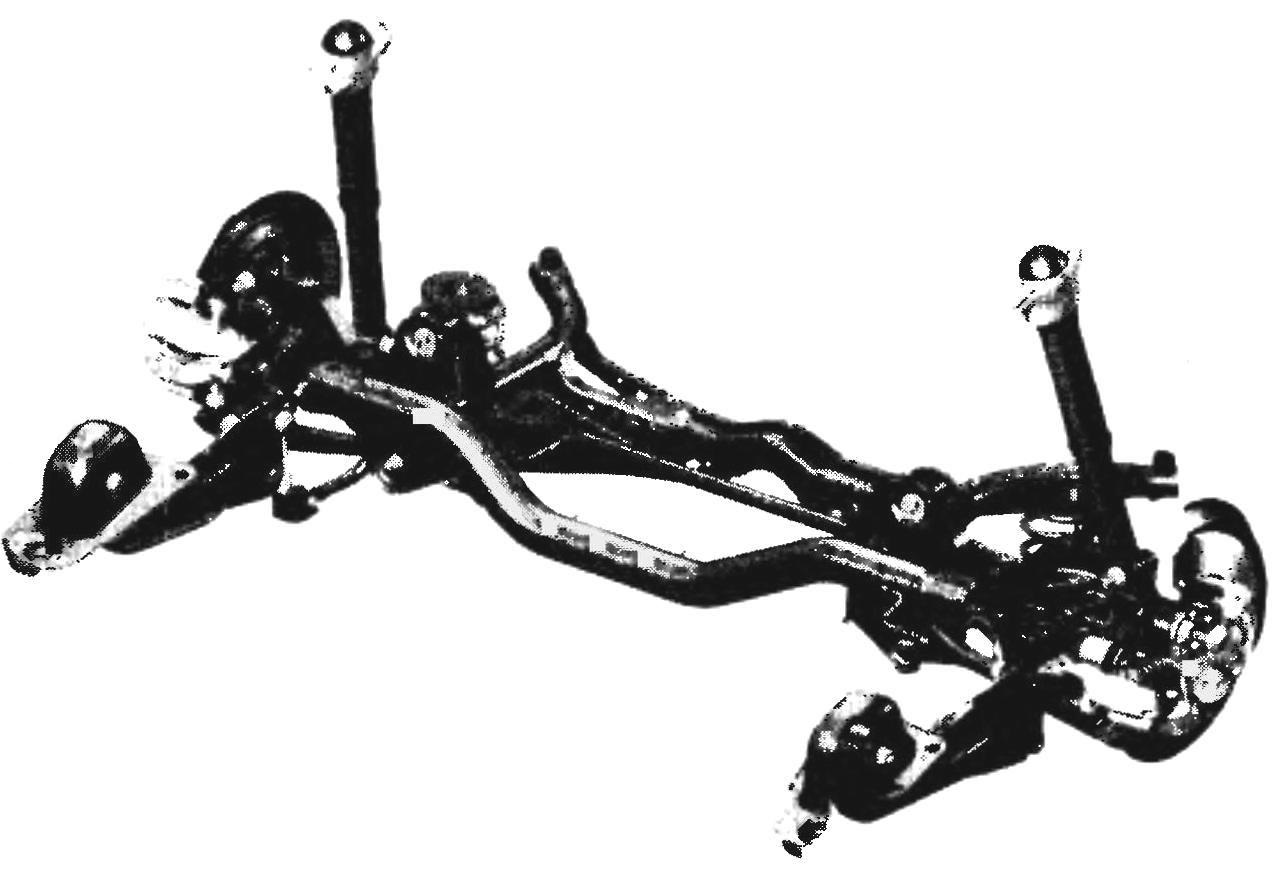 The rear suspension of the car 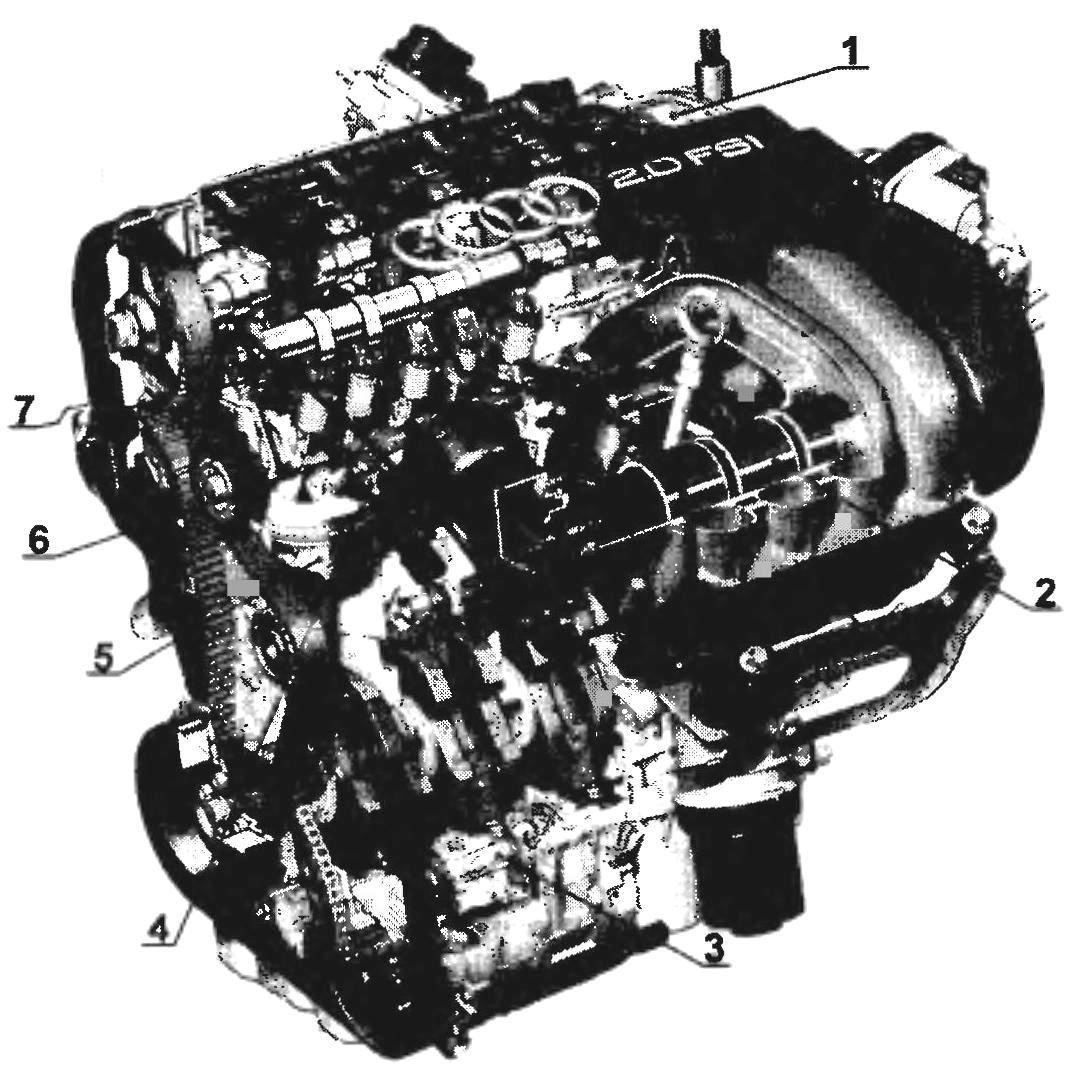 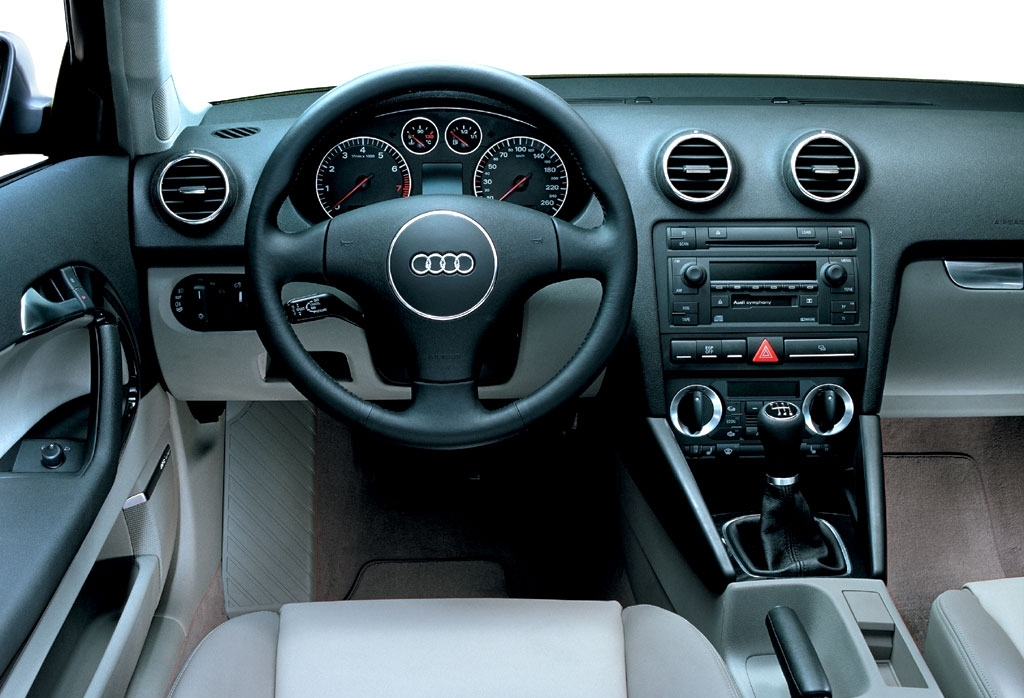 The interior of the driver’s seat 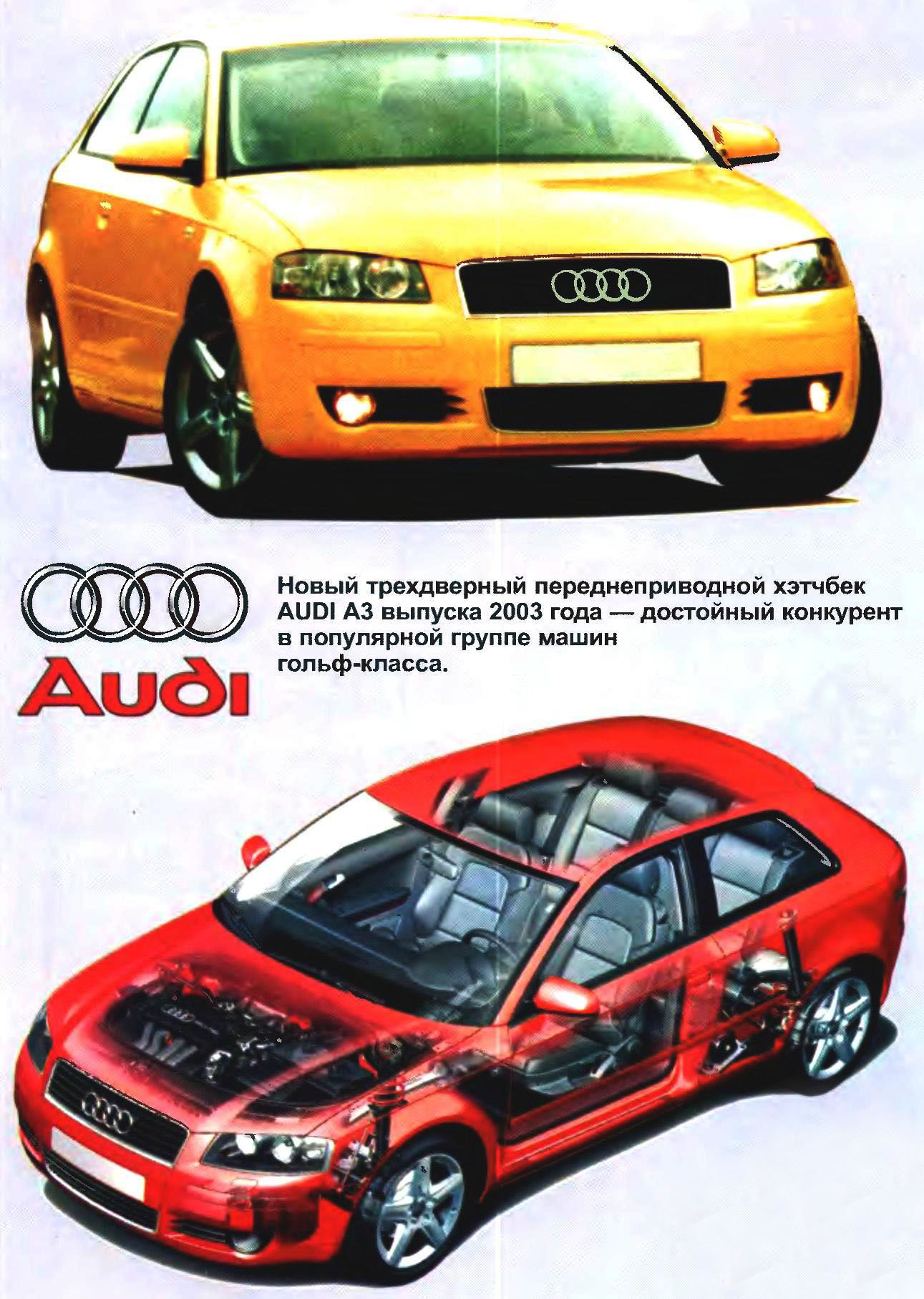 In addition to the petrol, the “Troika” of 2003 can be equipped with 8-valve 1.9-liter diesel engine capacity of 105 HP or 140-horsepower 16-valve 2-liter turbodiesel, and both the first and the second equipped with pump-injectors.
Note that the car with a 1.6-liter gasoline engine is equipped with a manual 5-speed, and the car with 2-liter engine — 6-speed transmission. To equip AUDI A3 automatic transmission is planned for December 2003.
The machine is available in three trim levels. Basic version with 16-inch wheels that do not differ special delights, is called Attraction. A sports version called the RS, in addition to design elements, differs from the basic reduced by 15 mm ground clearance, stiffer shock absorbers and 17-inch wheels with low profile tires. But the model-Suite elegance differs from the first two versions of the leather interior and polished inserts of wood, enclosing the Central console and doors. The Russian premiere of the AUDI A3 took place at the international motor show in Moscow in August 2003.
Technical characteristics of the car collection of AUDI A3 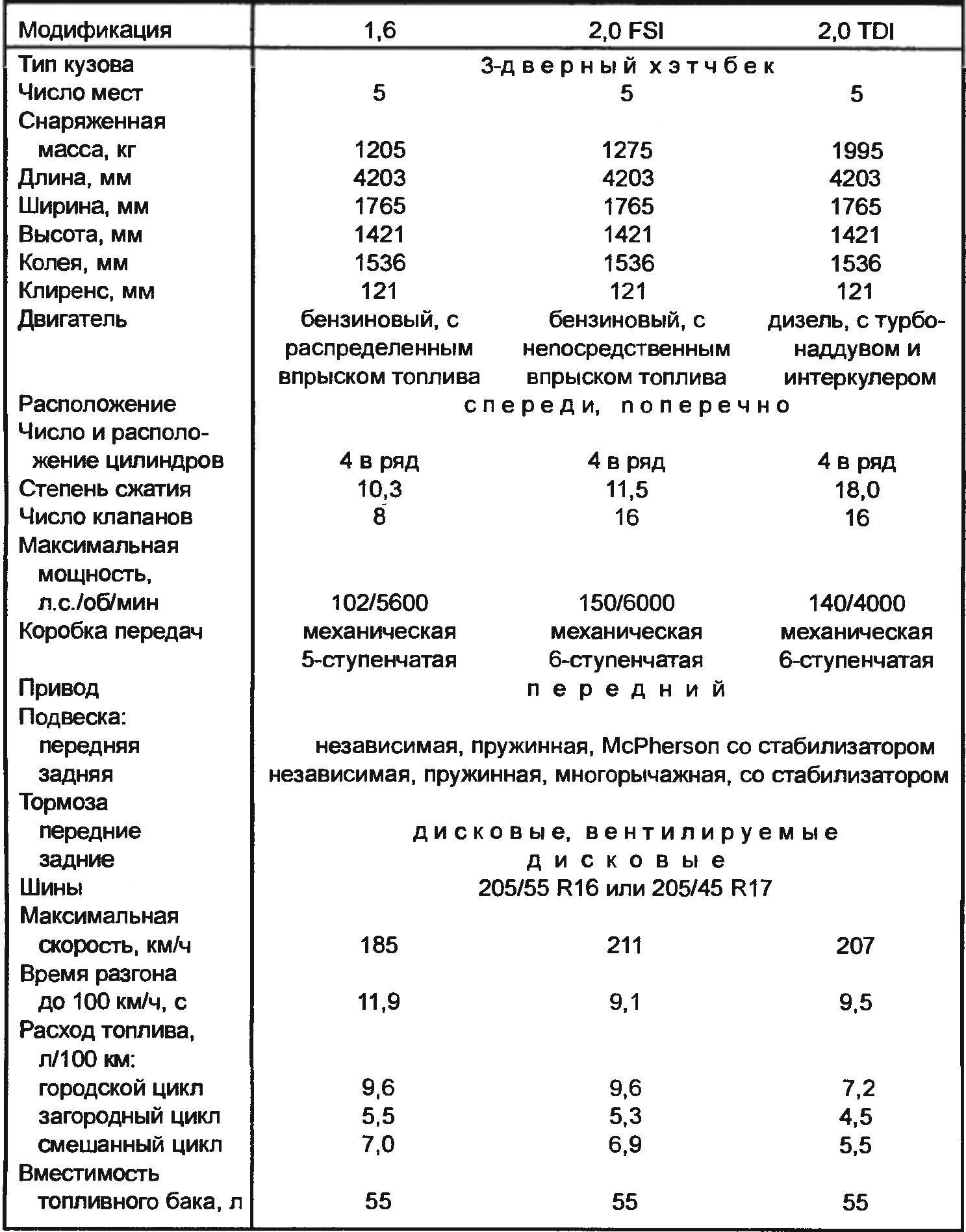 Immediately after this event began selling new cars at the Russian dealers in the particulars for the cheap basic version with the 1.6-liter engine, they are asking 18 500 euros. By the way, the closest competitor is the VW GOLF with the same engine costs about 16,000 euros. Would not that be the cause of history repeating with the “Troika” of the previous generation, the level of sales which was significantly different from the number of sold cars VW GOLF? Firm Audi, at least, suggests that the total production of the new “Troika” will be not less than 1.3 million cars. May be, and in fact the fruit is ripe?
I. EVSTRATOV