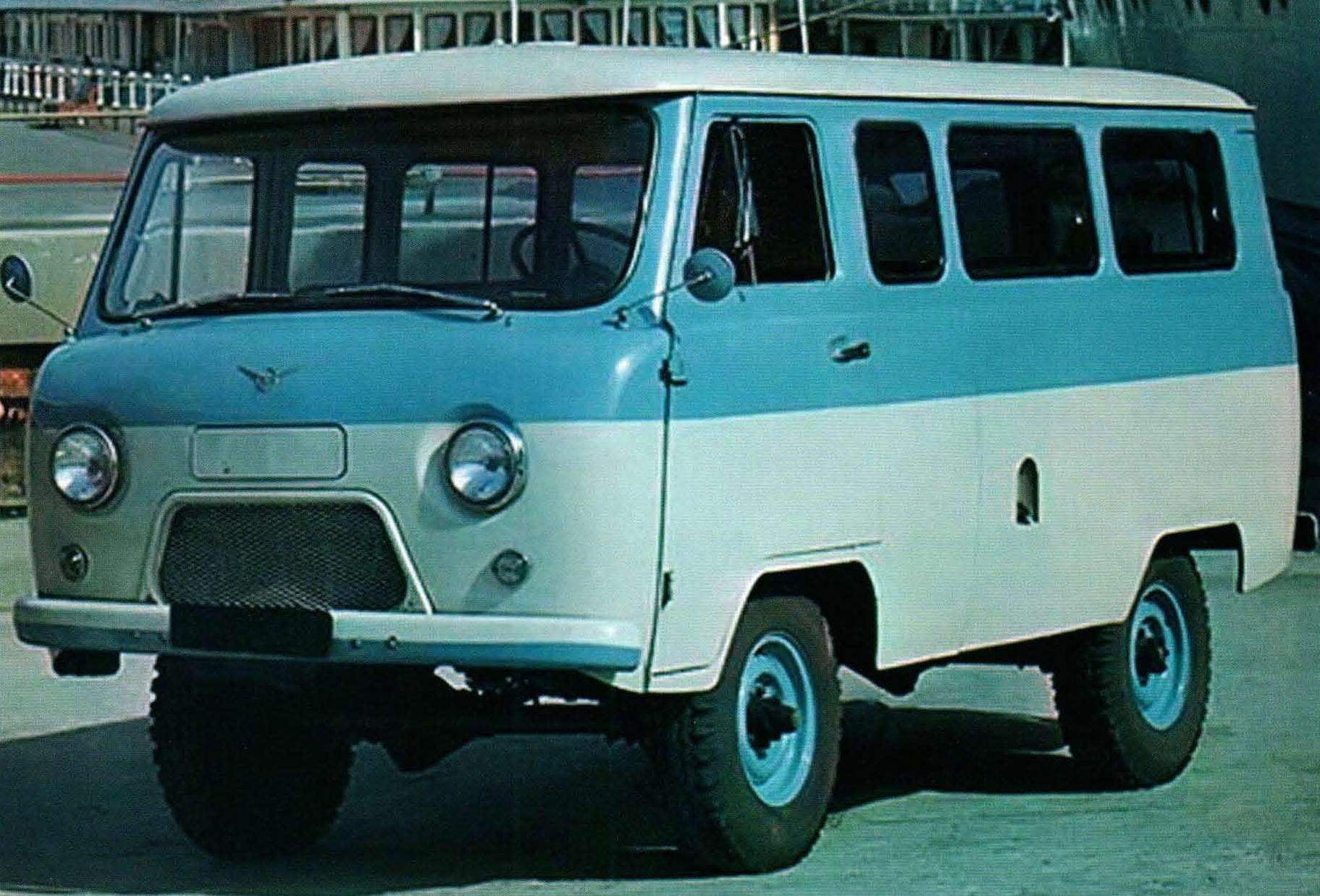 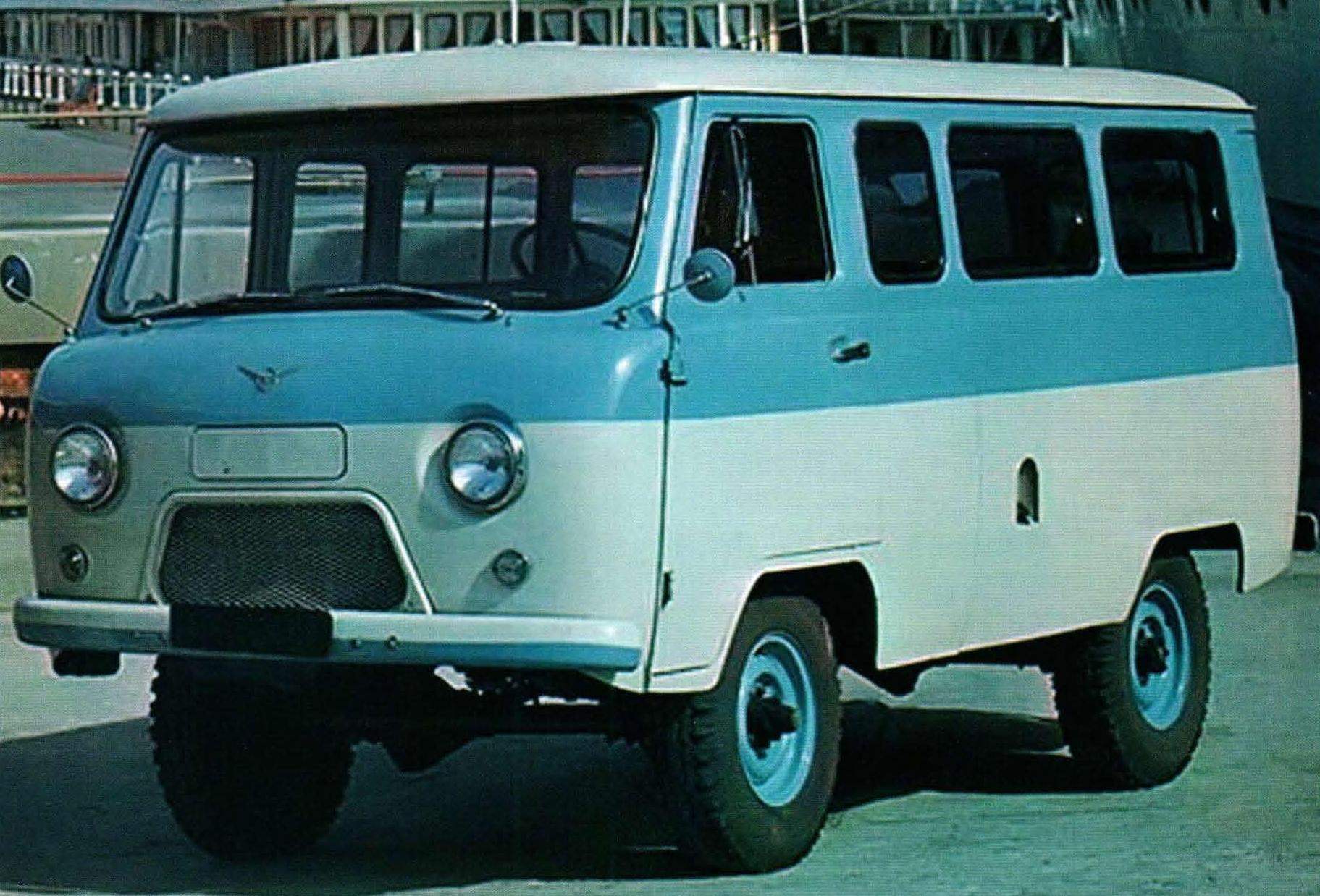 The cars of family UAZ-450 UAZ-452. General offensive on Moscow was deployed by the German command at the end of September 1941. As of October 10, the State Defense Committee adopted a decision on immediate evacuation in the heartland of the industrial enterprises of Moscow, which was the Automobile plant named after Stalin (ZIS), which at that time was headed by I. A. Likhachev. In a very short time, machines, materials and equipment Zisa was able to relocate to the East into the city of Miass, Shadrinsk, Chelyabinsk and Ulyanovsk. And in may 1942 the plant in Ulyanovsk, called Ulises, began the production of trucks ZIS-5V, and the second half of 1943, began to assemble an army of four-wheel drive trucks Studebaker from components supplied to the U.S.S.R. under lend-lease.

After the war, Alesis renamed Ulyanovsk automobile plant (UAZ), but it is, in fact, became only the Assembly shop of the Gorky automobile plant, from the conveyor which went a lorry GAZ-MM. Later, in December 1954, the Gorky automobile plant was transferred to the Ulyanovsk documentation and equipment for the production of the army jeep GAZ-69 – released in Ulyanovsk ATVs was named UAZ-69.
The first independent development of the Ulyanovsk automobile plant became the UAZ-450, designed specifically for rural areas. The story of this machine began in the spring of 1955, when the staff of the chief designer Department of the Oise, led by Ivan Davidov was invited to design the chassis of an army jeep UAZ-69 light truck load capacity 800 kg. Because the wheelbase “jeep” was only 2300 mm, place it on frame platform for the 800 kg of cargo was possible only with the wagon layout of the car. In the same 1955, the year the plant was collected five vehicles-prototypes for testing. By the way, UAZ-450 became the world’s first mass sports car wagon, a flatbed truck on its basis – the first Soviet car with a cabin located above the engine.
Serial production of four-wheel drive vehicles were deployed in October 1958. The machine was built in four main variants: ambulance UAZ-450A, the metal van UAZ-450, capable of carrying 750 kg of cargo, a truck with a wooden flatbed UAZ-450D is designed to carry 800 kg of cargo and 11-seater minibus UAZ-450V. All machines were equipped with a 62-horsepower four-cylinder gasoline engine nineleven GAS М21Г displacement 2,432 l, representing the modernized engine of the car “Victory” with the cylinders bored to the diameter of 88 mm. From the “Victory” was also used a three-speed gearbox. Two-speed transfer box, stamped frame, solid front and rear axles were borrowed from the UAZ-69. Of the “450” was a switchable front-wheel drive with ball-type constant velocity joints and single wheels with 25 inch tires. The car developed a speed of 90 km/h; average fuel consumption was 14 l/100 km. 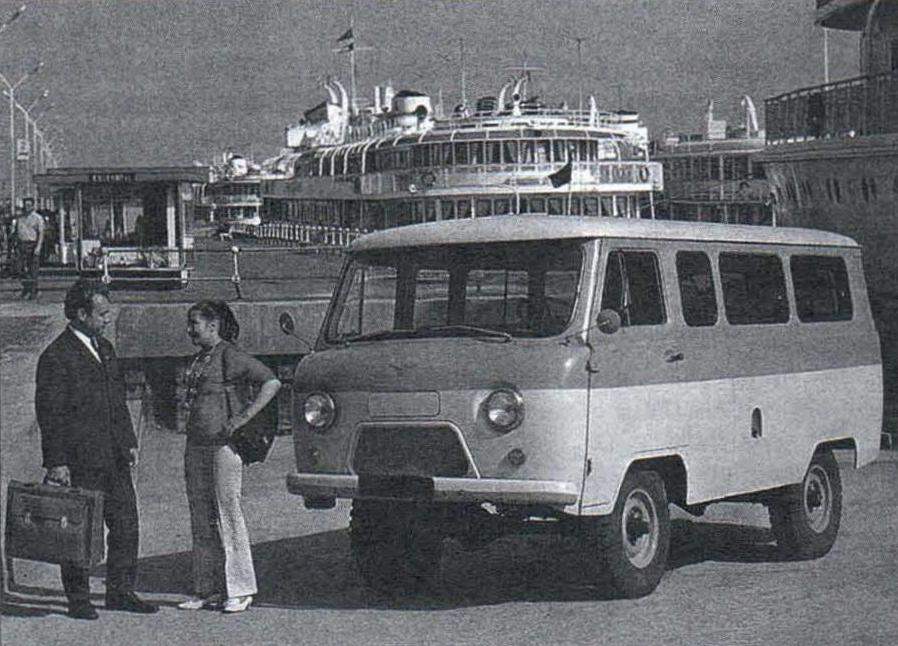 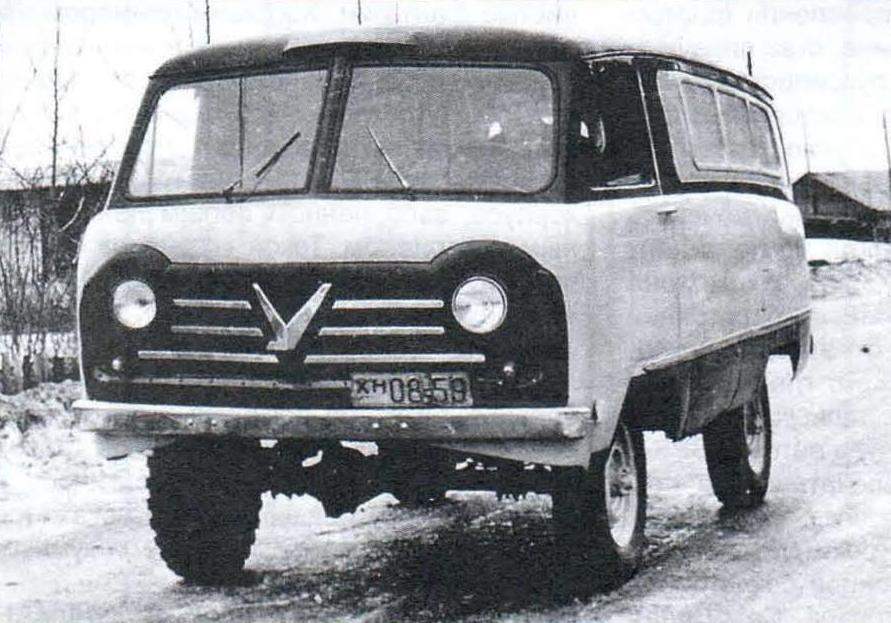 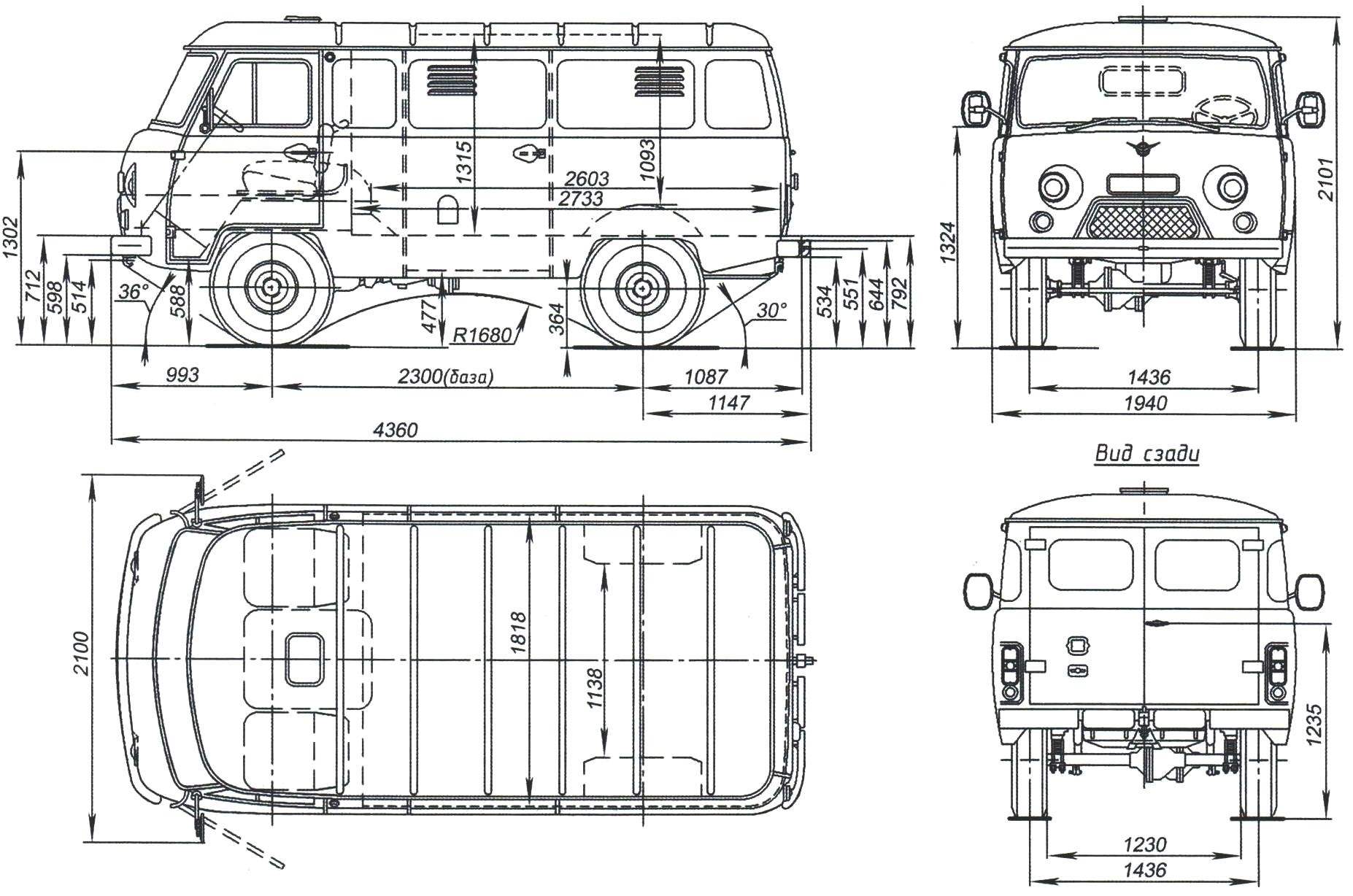 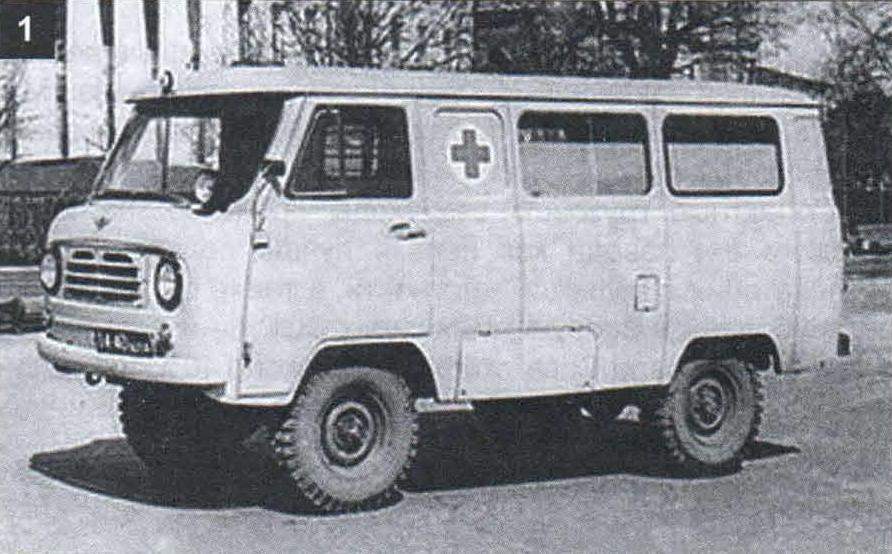 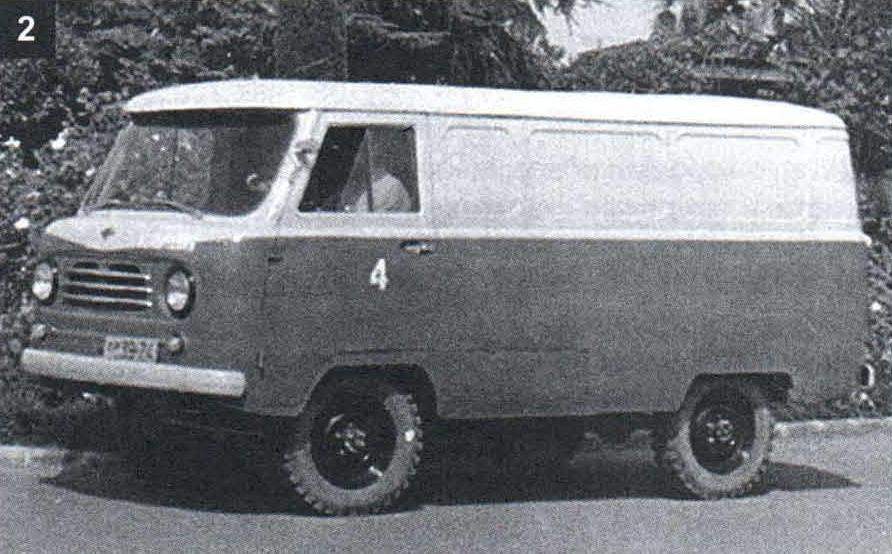 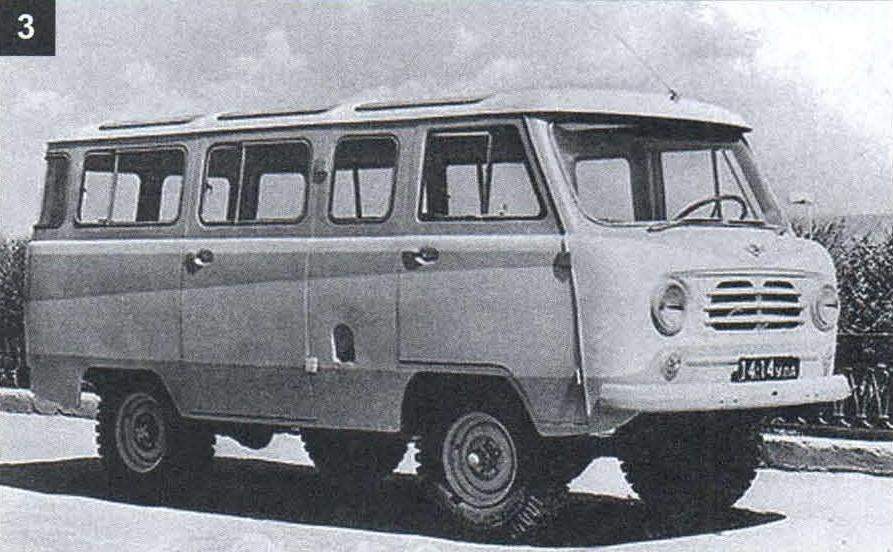 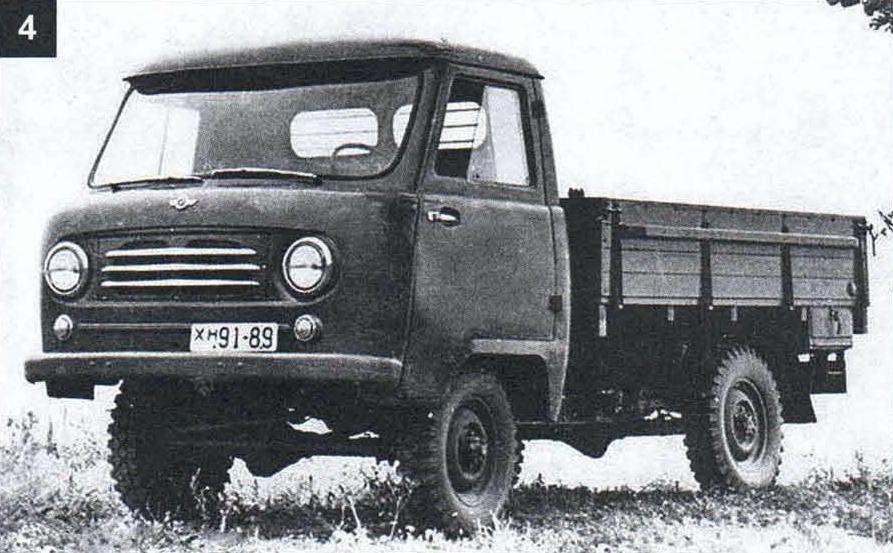 The first car of the new family became the ambulance UAZ-450A is designed for transportation of patients during the maintenance of the emergency stations in cities and rural areas. The machine could move on roads of all classes, and off-road, towing the trailer with a total mass of 850 kg.
The car had all-metal closed wagon-type body mounted on the frame in ten points.
The driver’s cab was separated from the sanitary compartment by a metal partition with window. The very same sanitary compartment was equipped with two side triple folding seats and one front mounted on the baffle, as well as brackets and straps for mounting the four stretcher – they were suspended in two tiers. On the side of the body there were two Windows, and the front was sliding. Wagon layout with clean lines, bent (as they said at the time – “panoramic”!) windshield, providing the driver a good view, soft suspension – all these characteristics showed the kind of revolution in the design of these cars.
mid-1960-ies-wheel-drive trucks and vans thoroughly modernized. In particular, they are equipped with a more powerful 70-horsepower engine GAZ-21 with a working volume of 2.4 l and four-speed transmission. Changed and appearance of the front of the machine.
The modernized vehicles received a new designation. So, four-wheel drive flatbed truck became known as UAZ-452Д, the van UAZ-452 ambulance car UAZ-452А. At the same time descended from the conveyor the compact, ten-bus UAZ-452В. Updated car featured a simplified grille, preserved to our days.
At the same time, the plant produced rear-wheel drive version of the cars in their names was added the letter “M”. By the way, the rear-wheel side Oise had several large capacity – up to 1 tonne 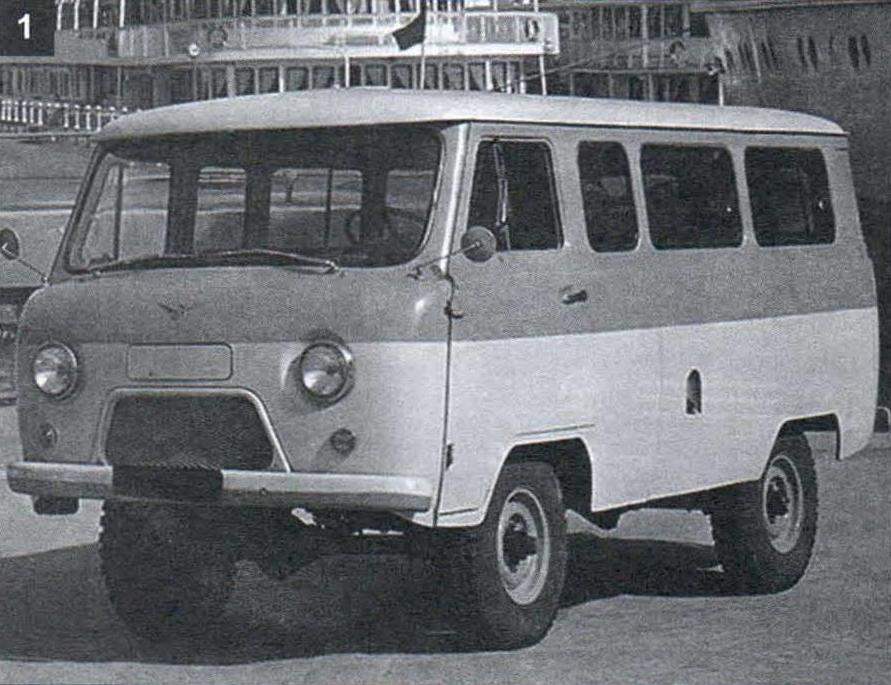 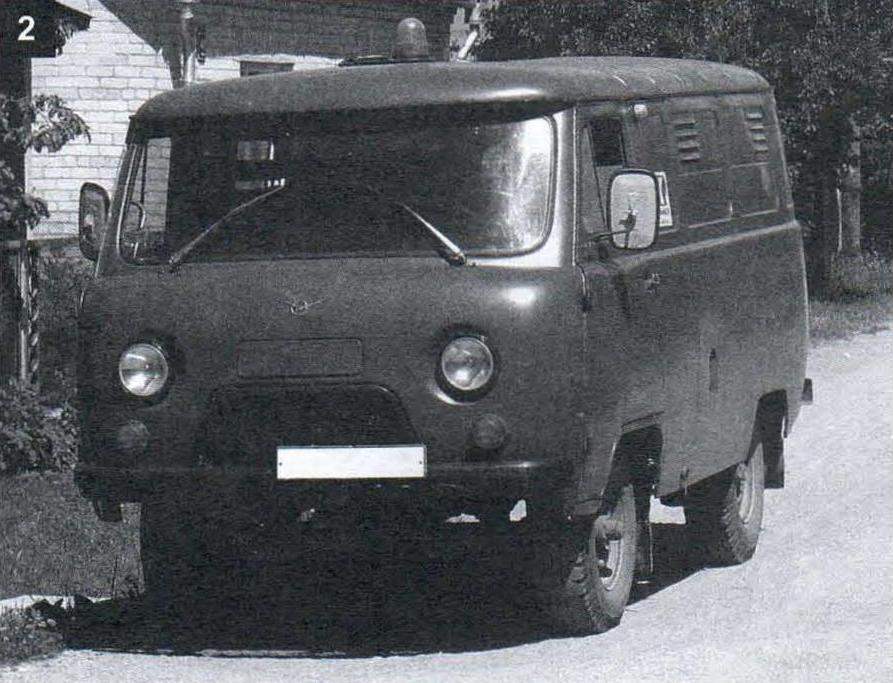 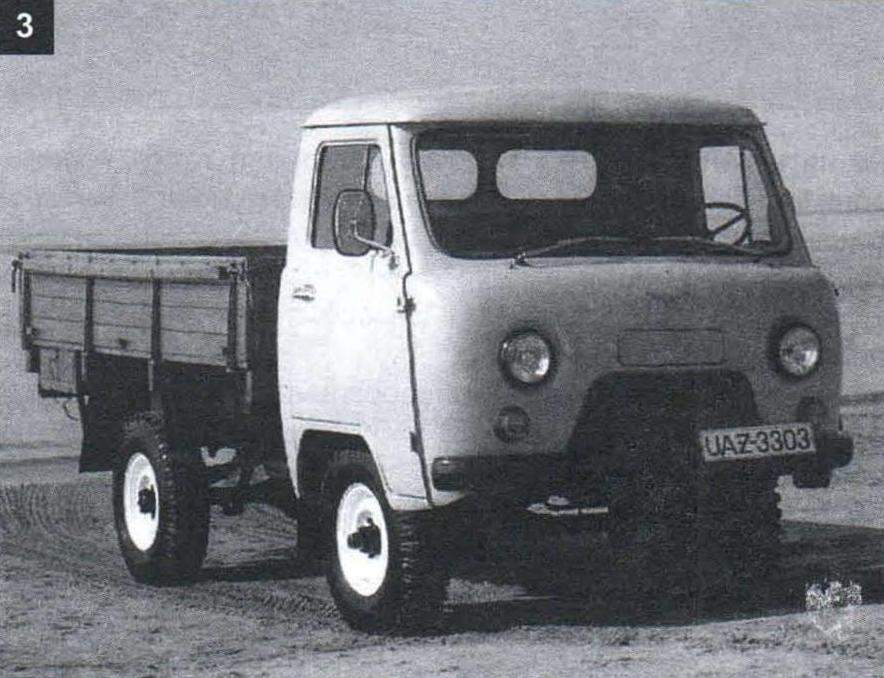 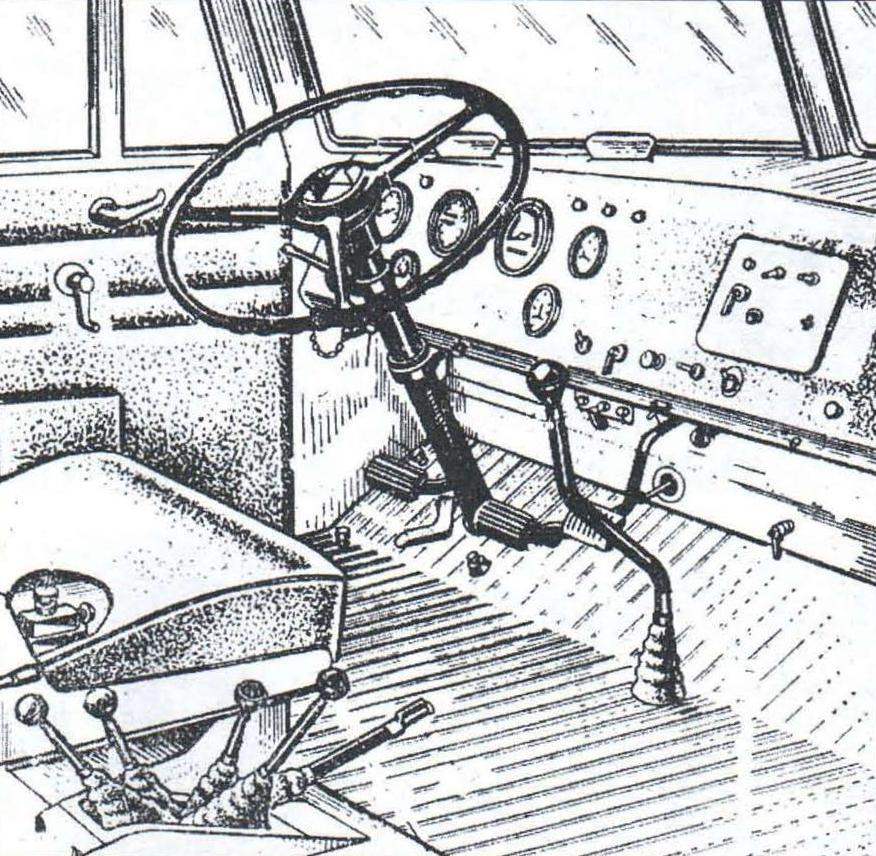 UAZ-450 – driver’s workplace
Compact trucks, all-terrain production Ulyanovsk automobile plant could not be better suited for use in rural areas, and was also widely demanded in the Armed forces of the USSR – it is known that until the collapse of the Soviet Union about 40% is released by the Ulyanovsk car UAZ-452 was designed for the Soviet Army. On the basis of the vans UAZ-452А the plant was producing army medical UAZ-452Г, which has five seats and two for placement on a stretcher. In addition, on the basis of the three-bus UAZ-452В on auto repair facilities did staff cars.
Department of the chief designer and pilot production Ulyanovsk automobile plant at the time of its existence created on the basis of the UAZ-450 UAZ-452, a lot of modifications, unfortunately, did not follow a series. So, in the beginning of 1960-ies arrived for testing sanitary car with hydropneumatic suspension, which possessed a high smoothness. However, this suspension proved to be too difficult in mass production.
In the early 1970s, at Oise has developed and built a prototype three-axis 16-seater bus UAZ-452К, which is also not mass-produced. However, tractor and UAZ-452П with trailer UAZ-752, the series has gone.
Known interest was the van that can move not only on roads and off roads but also on rails – a kind of hybrid of bus and railcars, intended for both military and civilian railway personnel.
Close attention from the experts called vehicle-a snowmobile on the basis of the truck UAZ-451Д, which is front wheel set ski, and the rear housed the rubber tracks. Were also developed another off-road vehicle – terrain vehicle with four tracks. 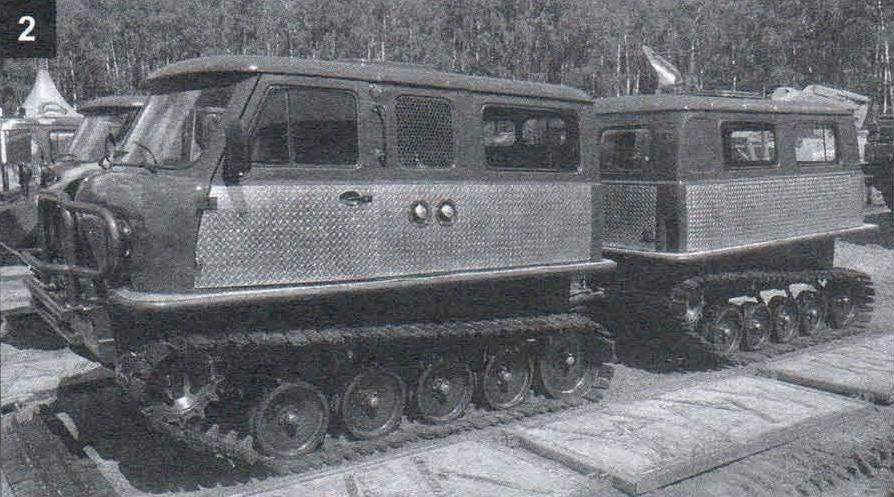 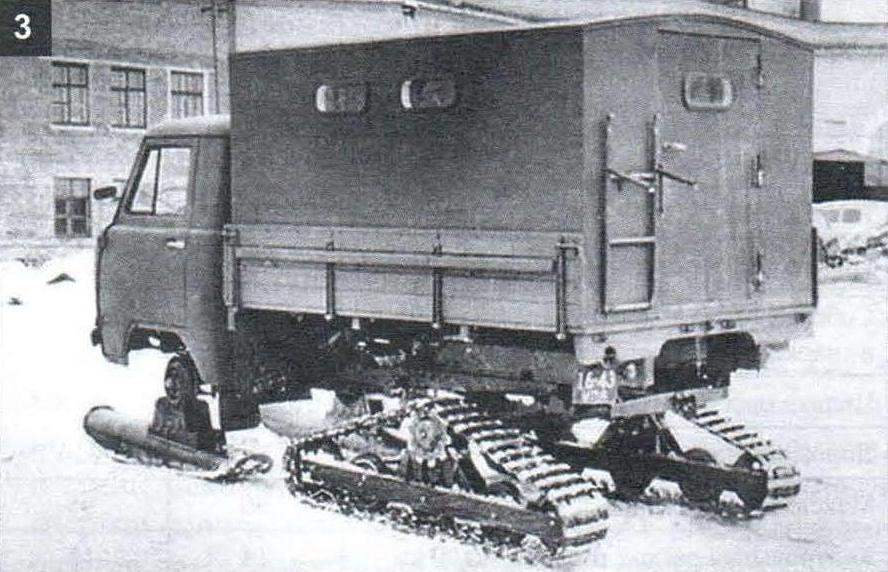 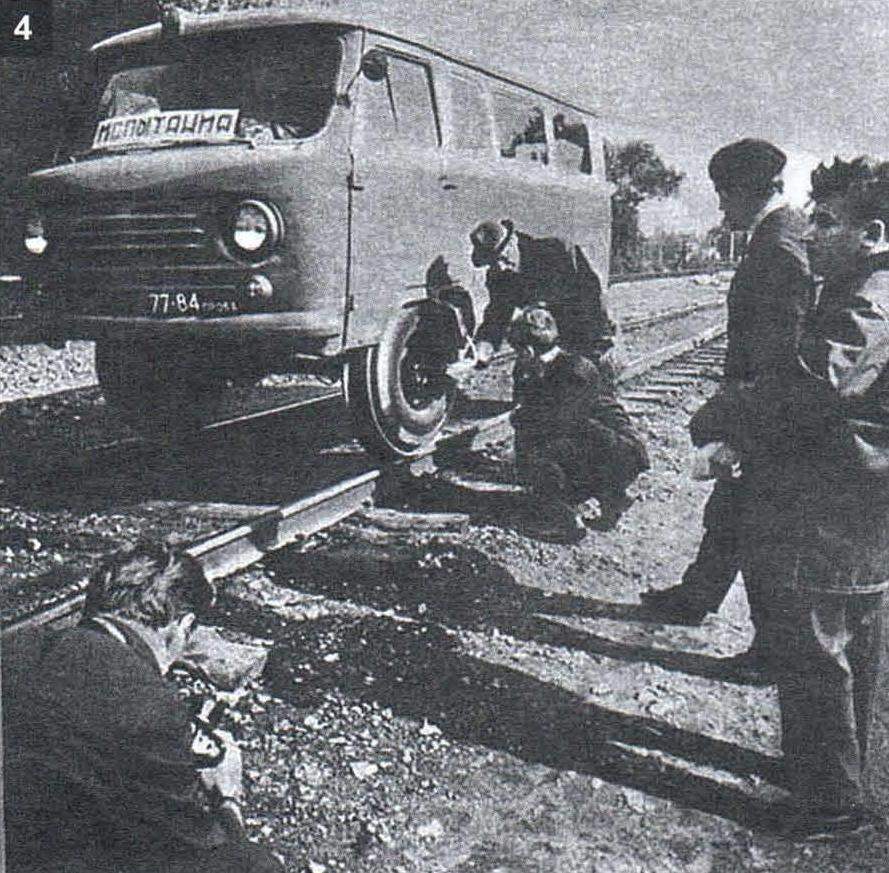 Experimental cars of the Ulyanovsk automobile plant:
1 – floating chetyrehkantnyj-terrain vehicle UAZ-492; 2 – caterpillar vehicle with active track trailer; 3 – ski-track vehicle based on the UAZ-450; 4 – train automotrisa on minibus UAZ-450 V; 5 – tractor trailer-refrigerator; 6 – three-axle truck with a wooden flatbed cargo platform
All these series are not vypuskavshemusya cars, however, testified to the design capacity of the plant.
In may 1966, exhibits of the Moscow international exhibition of agricultural equipment, steel and cars Ulyanovsk automobile plant. The jury of the exhibition, freight car UAZ-452Д was awarded a Gold medal. And in November 1977, the UAZ-452 was awarded the State quality Mark.
In the second half of 1980-ies of the UAZ-452 again modernized. The power of the engine is brought to 90 HP, equipped with machine bridges with modified gear ratios brakes with dual-circuit actuator and vacuum booster. Updated “UAZ” received a new title: flatbed truck -UAZ-3303, van UAZ-3741, sanitary UAZ-3962. All cars were upgraded with four-wheel drive and the models with rear wheel drive was discontinued. 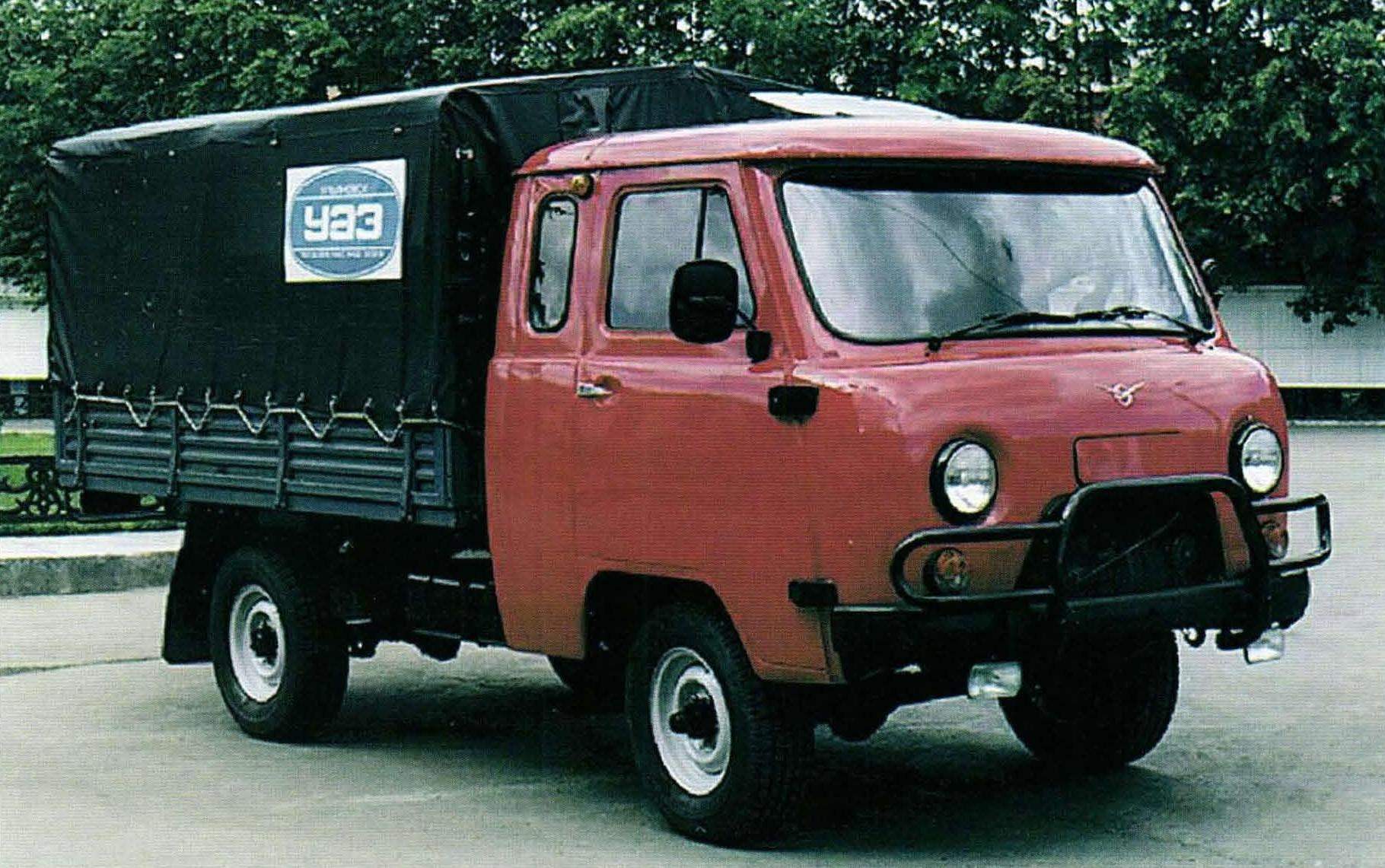