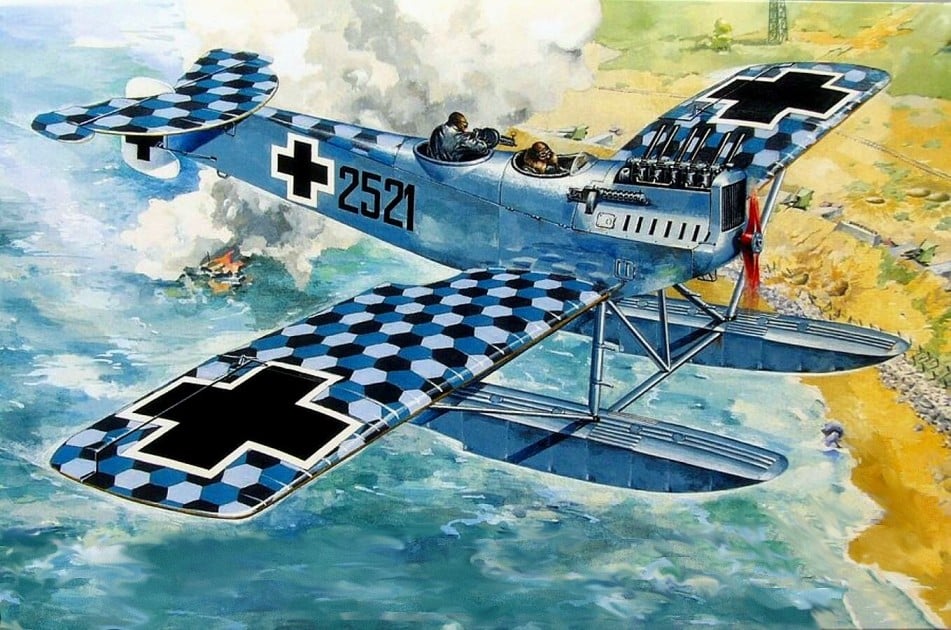 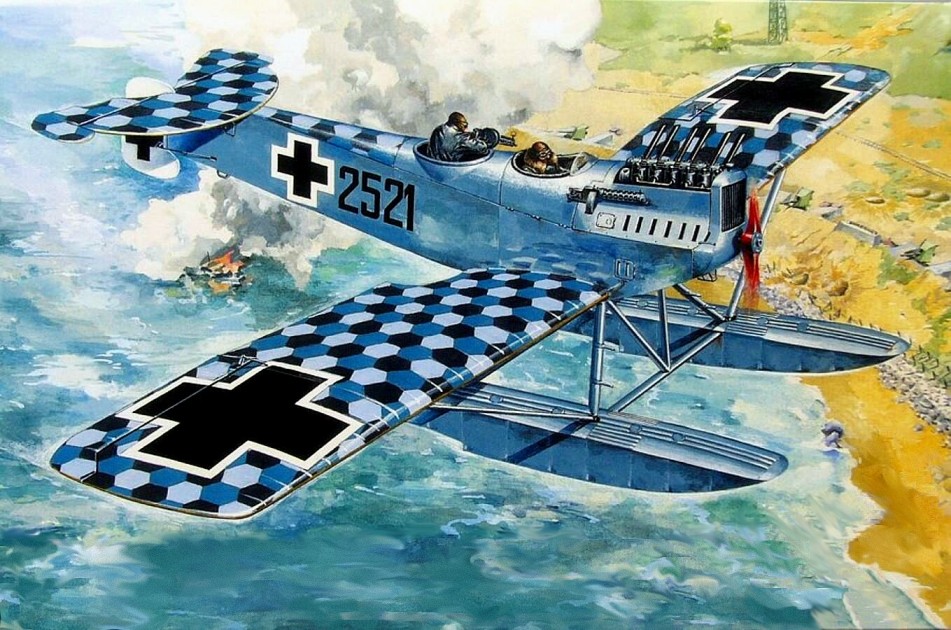 Seaplane Hansa-Brandenburg W-12. The date of establishment of the naval aviation of Germany is considered to be 26 Oct 1910. On that day Admiral Alfred von Tirpitz signed a Directive on early tests of aviation equipment and aircraft, intended for use in the German Navy. And in the winter of 1911 in Putzig was established the first base of naval aviation, whose commander was appointed captain-Lieutenant max Goering.

By the beginning of world war military aircraft of all the warring countries was in the stage of formation. In particular, Germany had the one airship to the North sea coast and six seaplanes on the island of Helgoland. In the Baltic sea operated based in the city of Cologne two of the airship and four seaplanes. Two seaplane was in Beam and eight in warnemünde. In addition, naval aviation had two dozen float planes, converted from wheeled vehicles, which were in Convene, Geestemunde, Kiloni and Willy-elmshaven.
During the war, Germany was intensively developing their naval aviation. In 1918, its lineup included more than 2,500 aircraft and 59 type airships Graf Zeppelin, two airship type “Parseval” nine — type “Schutte-Lanz”. During the combat actions of the naval aviation of Germany destroyed 270 aircraft, two airship sank a destroyer, three submarines and four boats of the enemy.
After the signing of the surrender of Germany in its naval aviation was still sixteen airships, 1478 seaplanes and flying boats. Under the terms of the Treaty of Versailles it all to be destroyed or transferred to the victorious countries.
Before the beginning of the war there was a merger of firms Brandenburg and Hanza with the aircraft factories in the cities of Brandenburg and Brest. The newly formed limited liability company Hansa-Brandenburg throughout the four years of the war engaged in the production of military seaplanes for the Navy of Germany and Austria-Hungary.
The chief designer of this company was Ernst Heinkel. the world-renowned. First released seaplane, taken into service by the German naval aviation, became a float fighter Hansa-Brandenburg KDW, representing mounted on floats the wheel Brandenburg D. I. fighter Redesigned the plane had the worst characteristics, than the prototype, because the floats “ate” part of speed and as a result, the machine could not equal to dogfight with the more maneuverable enemy fighters. For the same reason, diminished the already unsatisfactory for seaplane flight duration. All this has led to the need to create a new special device with improved performance, which became Hansa-Brandenburg W-12.
The plane was float solid wood biplane with fabric covering of wing and tail. Great attention was paid to his arms: W-12 was the first German double a seaplane armed one, and since 1918 — two synchronized machine guns firing forward (fired by the pilot). In addition, the pilot-observer in the second cabin on the pivot unit is mounted another gun. The pilot-observer was able to shoot in any direction on the plane, there was practically no “dead zones” for shooting from a feeding unit. This was achieved due to the fact that the rudder for the first time and the world were moved under the fuselage. The innovation did not affect the controllability of the aircraft in all modes of flight and during taxiing on the water. In addition to the rear hemisphere of the pilot-the observer could fire forward, since the space between the upper and lower wing was not closed by cables-stretching — a mandatory attribute of most biplanes of the time.
On the first prototype Hansa-Brandenburg W-12 installed line 6-cylinder water cooling engine Mercedes D-III 160 HP, the Construction of the prototype was completed in January 1917, the factory in Warnemunde. In the first flight proved that the center of gravity of the aircraft shifted back, and the pilot with great difficulty managed to avoid falling of the machine immediately after separation from the water. To remedy the defect wing box had to be moved to 350 mm back. Later, in one of the test flights the plane with the landing struck an underwater rock and sank. However, the loss of it could not stop the ongoing mass production, since the plane on the tests showed excellent results. The first series consisted of six cars, all of them came to the flying part at Zeebrugge.
After a few months W-12 took part in the battles in the Baltic and the North sea. After the first positive feedback from front-line pilots, the issue of the seaplane continued. The next three W-series 12, issued with the beginning of 1917 to March 1918, with a total number of 49 aircraft, distinguished by rounded wingtips and extended fuselage. The machine was equipped with a 6-cylinder Benz Bz-Ill 150 HP with a frontal radiator. Weapons of the series remained unchanged. In W-12 subsequent series established experimental V-shaped 8-cylinder engines of the Benz company power of 195 HP Another difference was the decrease in the height of the upper wing against the fuselage, and the ailerons on the lower wing. From February to July 1918 released an additional batch of thirty aircraft, equipped with the Benz Bz motors-Ill and enhanced armament —two synchronized machine guns. They were followed by two series of forty, and twenty cars with engines of Mercedes D-III and one synchronized machine gun. There were 146 built seaplane W-12. 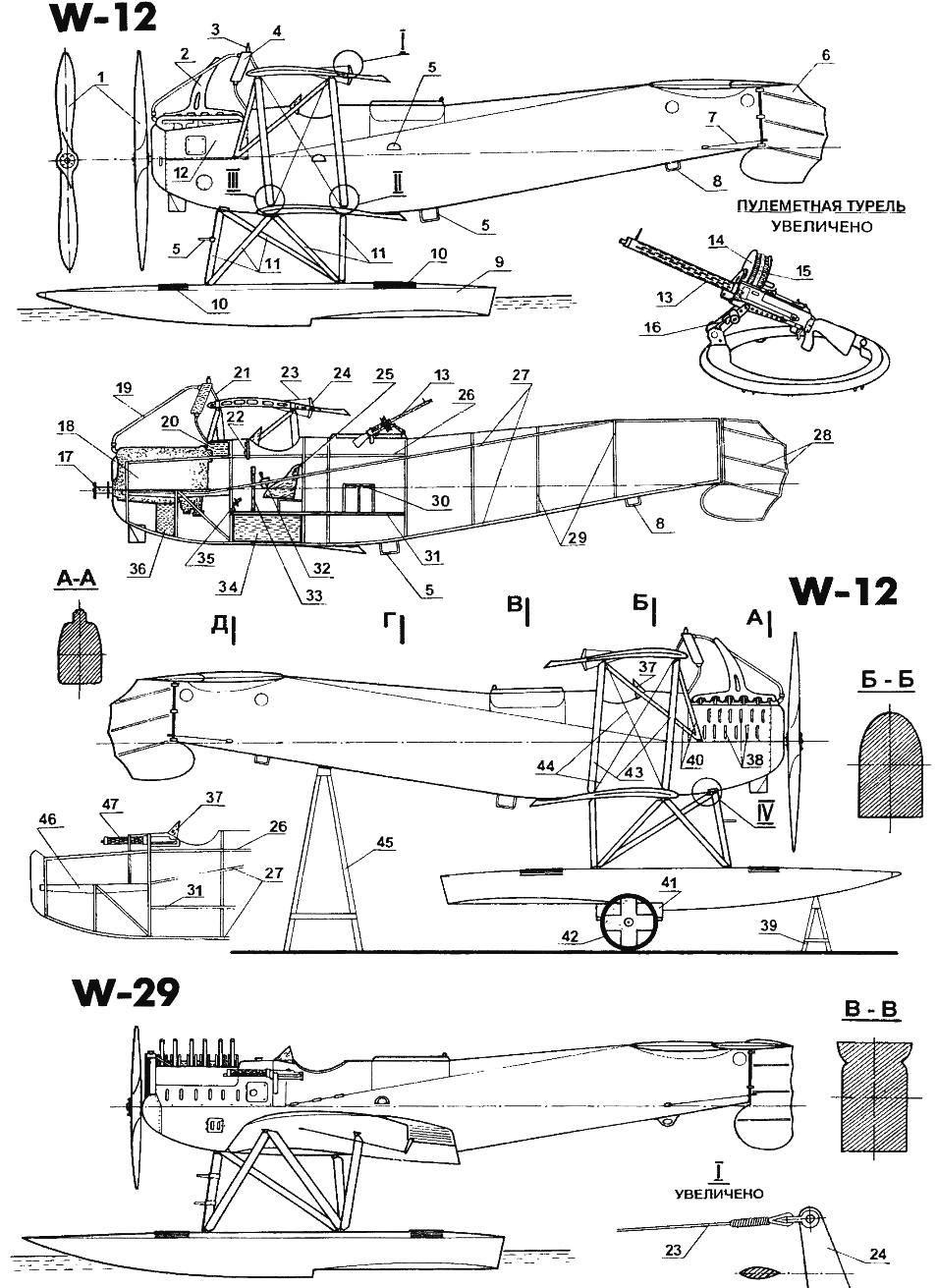 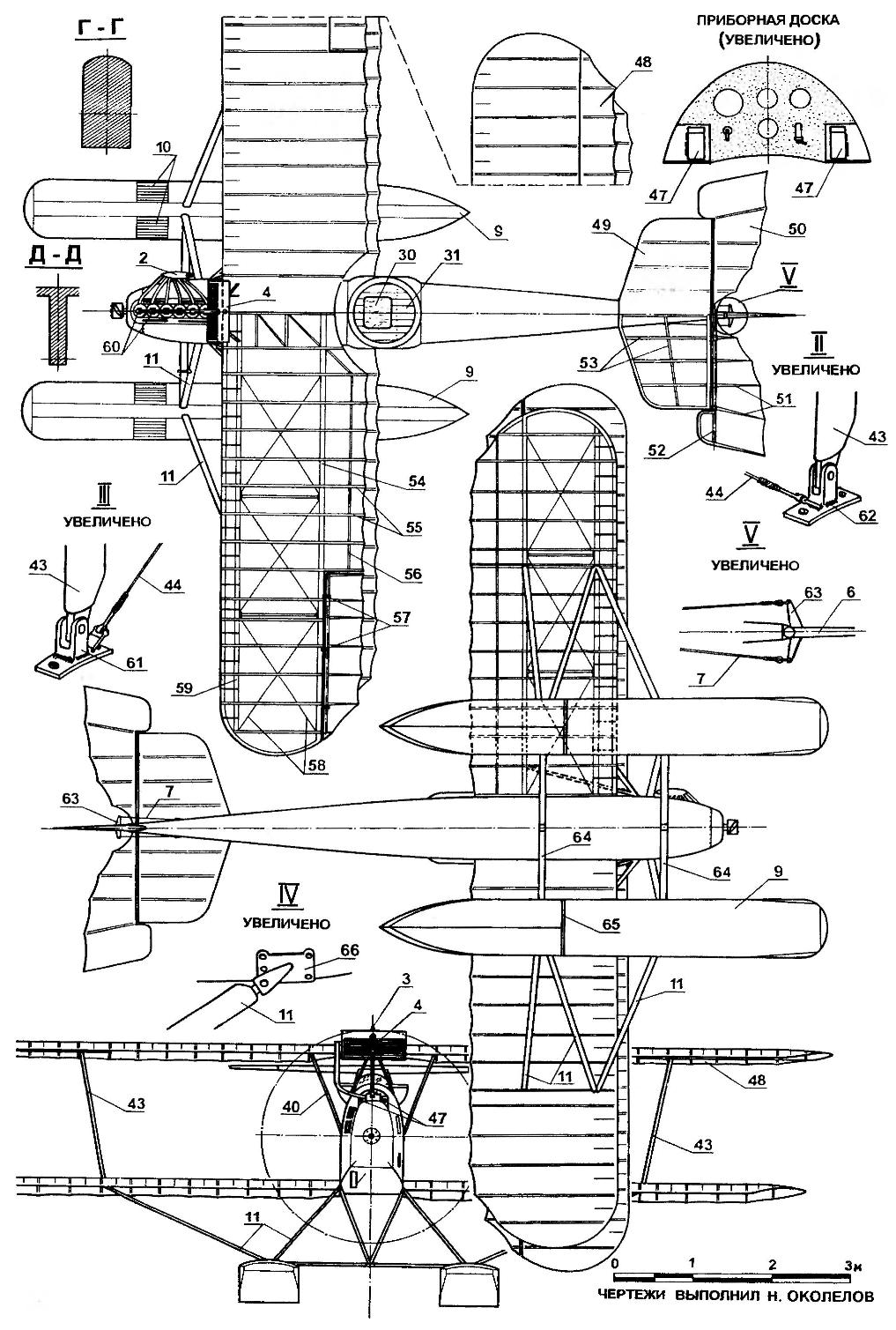 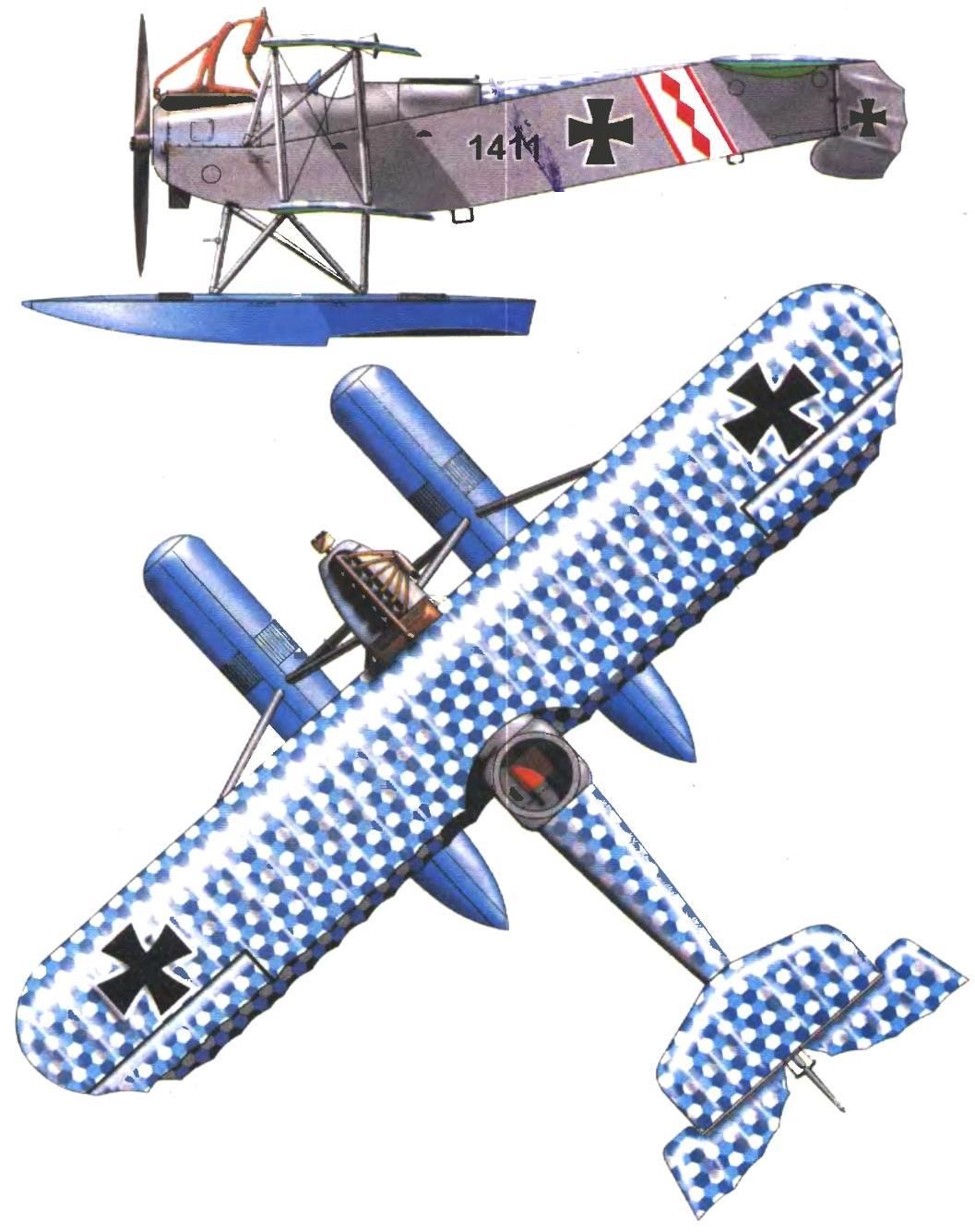 Hansa-Brandenburg W-12, 1917.
The pilot on the instrument panel housed the control devices of the power plant and parameters of the flight mode. Management system rudders and ailerons are cable. Before the cockpit was mounted transparent visor. The gas tank was located under the cabin floor. Cabin of the pilot-observer was located directly behind the pilot and had the safety of the wind visor. Some instances of manned aircraft radios. The left and right sides of the fuselage held the cable harness system of the Elevator control and direction.
The tail had an unusual scheme. The keel was completely absent, and the rudder was developed down under the fuselage. The stabilizer had no struts. It gave the arrow of large sectors of fire, he could not be afraid to shoot off the tail of his plane. Power set of rudders and height consisted of steel tubes. The covering of surfaces and fabric.
Landing device — two solid wood odnorodnyh float box type. Outside floats are covered with waterproof varnish. To their decks had a special power pads, which could step crew members. To the wing and the fuselage the floats were attached to the N-shaped steel pipes in the fairing shaped profile. To move a floatplane on the ground provided for the installation erratic wheeled chassis.
Powerplant — line engine water-cooled Mercedes D-III 160 HP On some series stood 6-cylinder engines of the Benz Bz-Ill 150 HP or 8-cylinder (195 HP). Closed dural engine hood on the screws, which provides good access during maintenance. All W-12 was completed with a two-bladed wooden propellers with a constant pitch. Fuel was located in one fuel tank in the center of gravity of the aircraft under the cockpit. The oil tank was located under the engine in the nose compartment of the fuselage. Front oil cooler for the prototype and the first series machines were attached to the upper wing, the axis of symmetry of the aircraft, and the later W-12 —front of the engine. The exhaust gases are collected in a common manifold and were derived for the upper wing.
The armament of the aircraft consisted of one or two synchronous 7.92 mm machine guns fixed in the fuselage between the engine and the cockpit. I reloaded the guns by the pilot manually. In the cockpit observer on the pin was another 7.92 mm machine gun. The ammunition of each machine gun — 500 cartridges. On airplanes equipped with radio, synchronous machine guns were not.
N. Food reserve was, A. CHECHIN, Kharkov