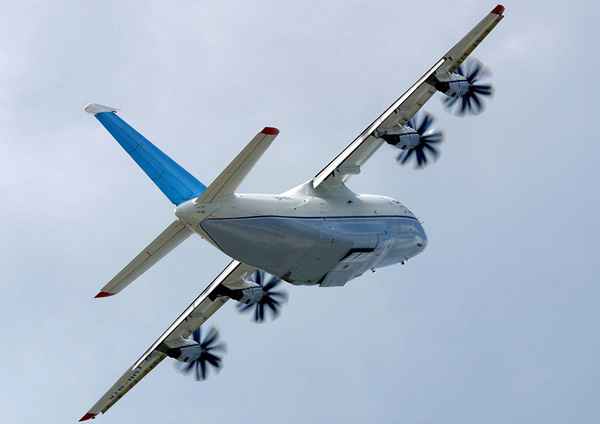 An-70 medium — range cargo (operational-tactical military transport) aircraft of the new generation of short take-off and landing. Antonov an-70 intended to replace the obsolete An-12. Performed on the aerodynamic configuration vintoventilyatorny four-engine turboprop high-wing monoplane with single-finned tail and tail cargo hatch.

The development of military transport aircraft (MTC) An-70began in 1986 After seven years of tactical and technical requirements specified, wherein, based on the need to transport a medium tank, the maximum capacity of the machine increased up to 47 T. the Peculiarity of the aircraft were four gas-turbine engine with coaxial propeller-fans and fly-by-wire control system. In the aircraft design is widely used composite materials.

The first flight of the An-70 took place on 16 December 1994 10 February 1995 and the plane crashed. To continue testing built a second model, testing and refinement which is ongoing.

An-70 is designed to carry 110 paratroopers or up to 300 fighters with personal weapons, or 206 wounded. The aircraft can be widely used in civil aviation. Was developed on the basis of: transport An-70T with a crew of 2-3 people, its twin-engine version of the an-70T-100, capacity 30 t, convertible cargo-passenger An-70ТК VTS and short takeoff and landing An-77. It is possible to create tanker aircraft, early warning aircraft and search-and-rescue variant.

the main modification.
An-70T
transport aircraft with four engines D-27 for use in civil aviation. The plane carries 35 tons of cargo on distance of 3800 km, and 20 t – 7400 km and the Capability to operate from concrete and unpaved runways with a length of 1300 m allows you to operate it in all the airfield network of the CIS.
An-70ТК

the an-70T with a passenger cabin.
An-70-100
modification of aircraft with two engines D-27. The plane has a lower takeoff weight and a simplified chassis, it changed a number of systems and units. When you apply with runways with a length of 2500 m it is capable of carrying a weight of 30 tonnes to a range of 1000 km or 20 tons – 4,300 km with extremely high fuel efficiency.
EN-77
modification with four CFM56-5А1 and avionics of Western origin.
An-7X
modification proposed as the main transport aircraft for the European NATO countries. 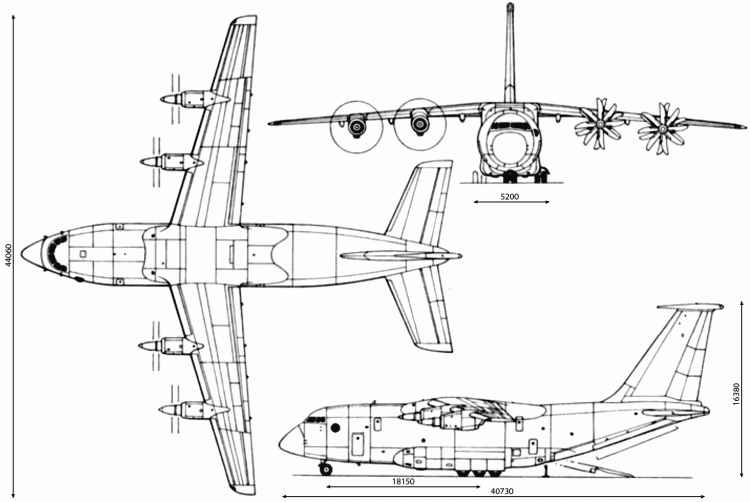 Engines D-27 with a capacity of 14 000 e. HP turboprop vintoventilyatorny