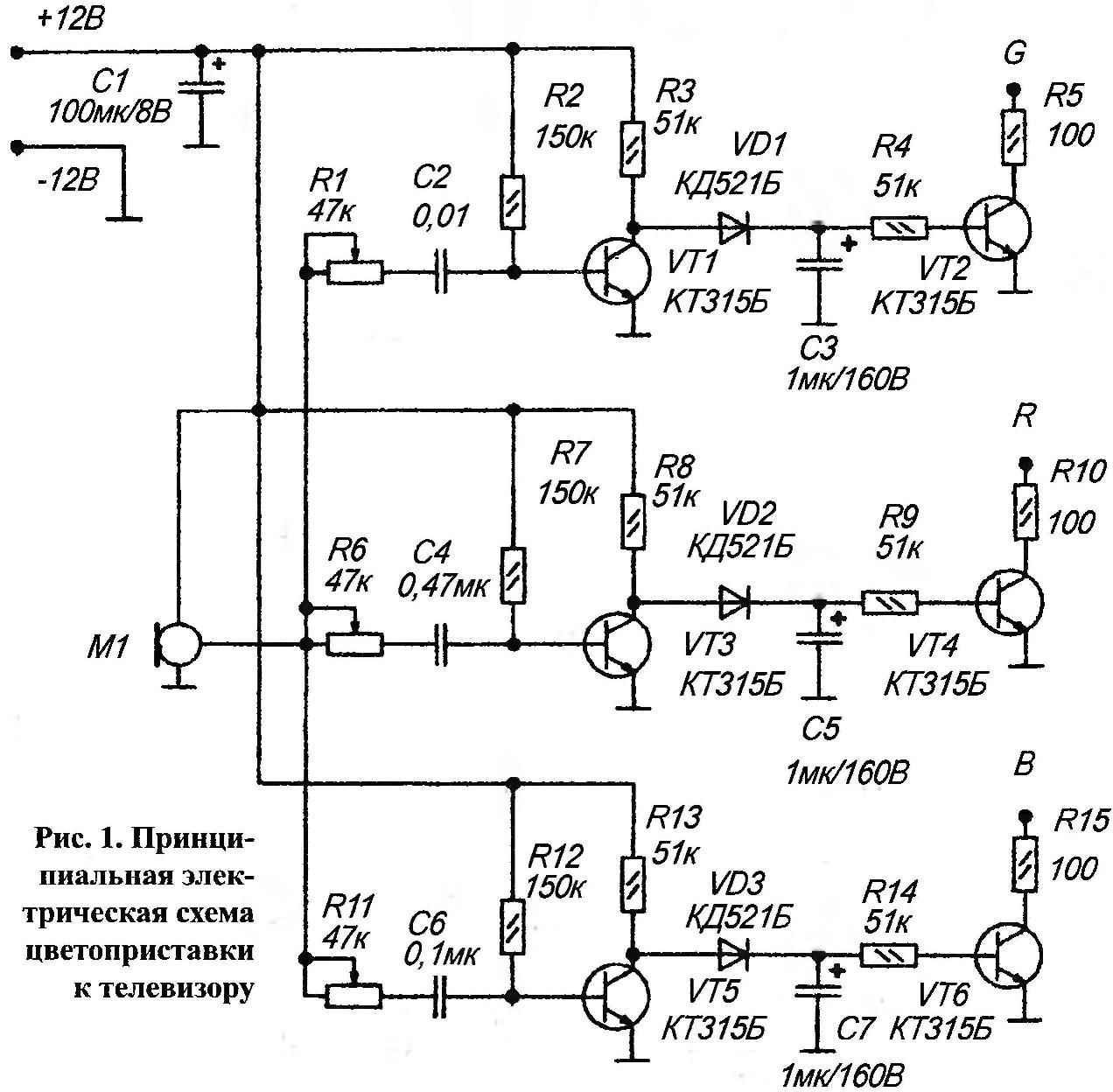 This attachment attaches to a regular television properties, a musical installation by changing the color of the image, respectively, the acoustic sound signal. When using the TV picture when speaking of the audience changes the color color.

Another use of the prefix is a color support of music programs with the aim of increasing their entertainment. Color television image will vary depending on the frequency and amplitude of the music signal. So, instead of blue and red appears green and green color changes to blue. Instead of crimson shade appear purple or brown. Patches of white telesurgery acquire pink tones. There are many different color combinations.

Diagram of the console shown in figure 1. The audible acoustic signal is perceived by active MIC “Rustle-1”, the signal from which is supplied through resistors R1, R6 and R11 to the filters of higher, medium and lower frequencies of the audio range, collected on the transistors VT1, VТЗ and VТ5, and capacitors C2, C4 and C6, dividing the sound signal into upper, middle and lower frequencies. The signal from the higher frequency from the collector of transistor VT1 is fed through detector diode VD1 and capacitor Sz, which is constant voltage, magnitude proportional to the level of components of higher frequencies. This voltage opens transistor VT2, the collector of which through a resistor R5 is connected to the green channel of the TV, which is weakening. In the result, the green areas of the image take on a blue color.

Fig. 1. The electrical circuit of svetoprestavlenie to the TV.

The middle frequency signal from the collector of transistor VТЗ passes through the detector, performed on the diode VD2 and the capacitor C5. Voltage after charging of capacitor C5 through resistor R9 VТ4 opens the transistor, the collector of which through a resistor R10 is connected to the red color channel of the TV, thereby weakening its image and causing the appearance of different shades and colors.

The signal of the lower frequencies is removed from the collector of transistor VТ5 and flows through detector diode VDЗ and the capacitor C7 in the form of a DC voltage component proportional to the level of the lower frequencies through a resistor R14 open VТ6 transistor, the collector of which is connected to the blue color channel of the TV, relaxing blue color in the image and enhancing the green. 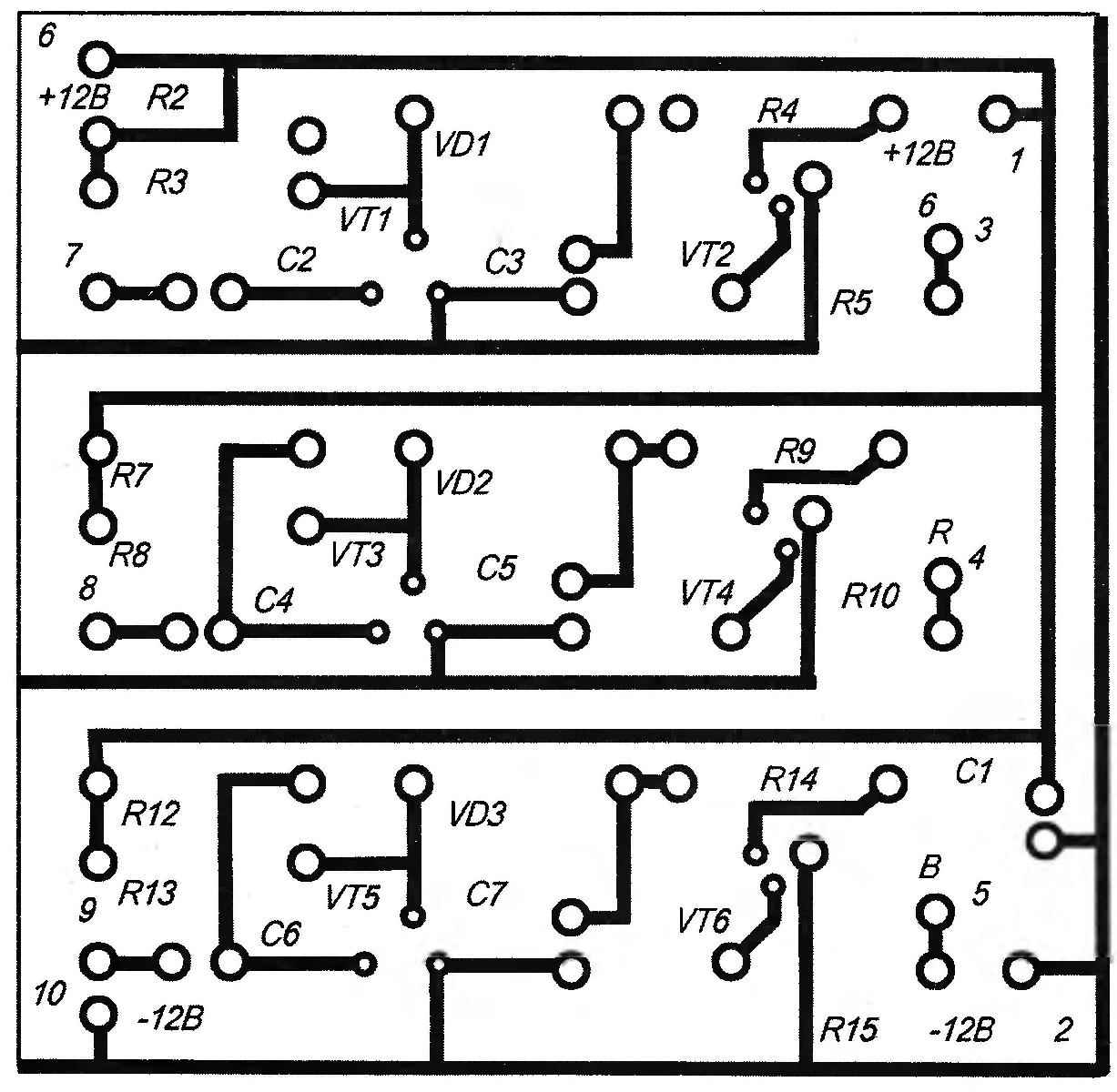 The console is designed to work with CRT TVs. The connection is made to channels of primary colors in the CRT Board. The common wire is connected to the common wire of the TV.

Support for color TV, the device must be installed near the television receiver, sending a microphone on the TV speaker, the variable resistors R1, R6 and R11 set to the middle position. In the presence of a music program the remote control to increase the volume level of your TV until the color of the color television image in each of the three color channels, adjusting respectively the regulators of the resistors R1, R6 and R11. Upon completion of the music program the remote control should reduce the TV sound to the disappearance change the color on the screen. Therefore, adjusting the sound level of the TV remote control, you can control svetoprestavlenie.