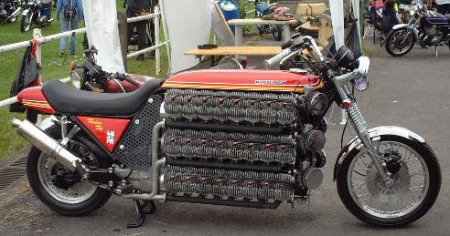 A certain enthusiast by the name of Simon Whitlock set out to build not just powerful, but very powerful motorcycle. You can go simple way – to attach to a motorcycle frame any brutal engine of a large volume, such as from a Viper or Corvette, but then the design would be too bulky and large, which is undesirable.
And then this enthusiast found is not quite simple, but very elegant solution – “rasterman” 16 motorcycles Kawasaki KH250 parts, he United their engines as one, the result of which was monstrous 48-cylinder engine weighing almost one ton.

To run it there is one small gasoline engine hidden under the seat, and the ignition head 6 valves 8-cylinder Jaguar E-Type. Transmission, oddly enough, still motorcycle – BMW, but thoroughly converted. 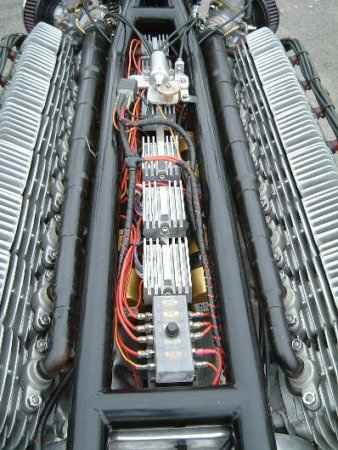 In the end, the designer was very high-spirited motorcycle, just a little heavy. Putting an end to this audacious project, the enthusiast immediately began following the construction of the motorcycle with a very small motor, which is, however, not give great power. What is his understanding of the “big motor”, we already know.

The starting price for the lot, which took its place in the Guinness book of records, is half a million pounds (791650 USD). He became the eighth most viewed video on YouTube received more than 5 million views. 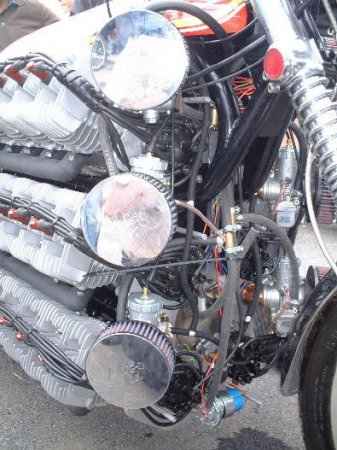 I think no one will be able to properly ride a motorcycle. Yes, and sellers, of course, do not expect to sell their miracle. This kind of advertising. As the ad said, “If the price is too big, we can build you something easier.”