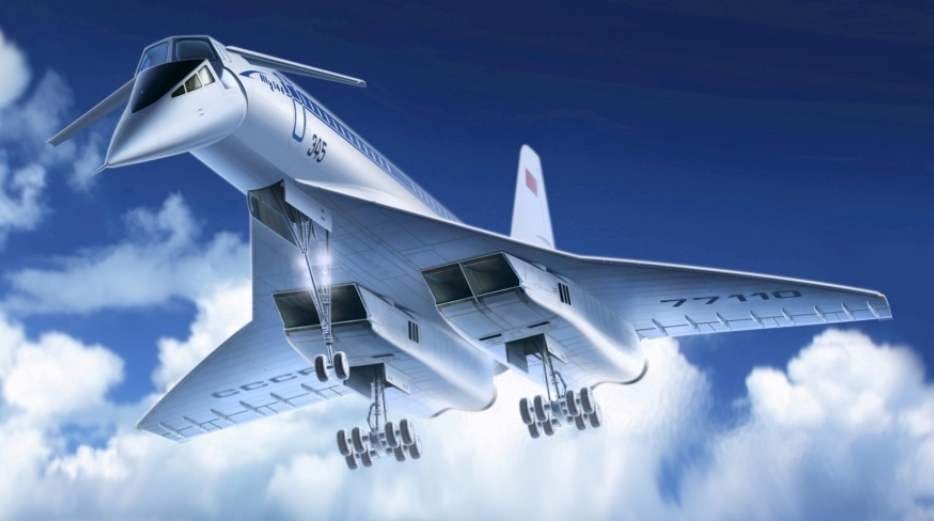 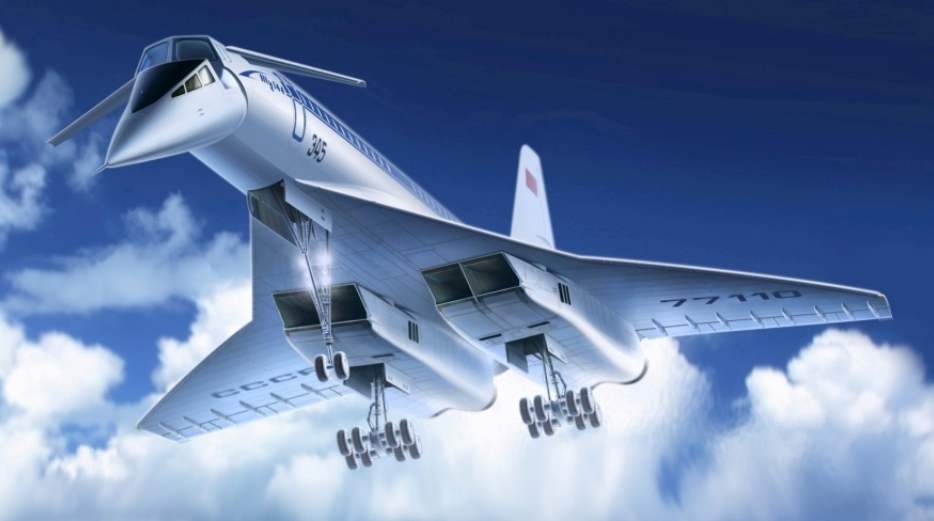 The first post-war years were marked by the aircraft industry in the rapid development of jet technology. To increase the thrust of gas turbine engines, their efficiency and, most importantly, reliability has allowed us to start building the first jet Airliners. Their success, despite a number of mysterious, at first glance, the disaster was huge, and overcome the “sound barrier” military aircraft and even gave rise to the opinion that passenger planes may have to fly faster than sound. Of course, there be willing to create such a machine, and on paper they all turned out smoothly. It seemed sufficient to reduce the specific fuel consumption of the engine and increased to the necessary level of aerodynamic quality of the airframe, and aircraft, and competitive – ready. However, the reality was much more complicated.

The first researches on creation of supersonic passenger aircraft (PCA) joined the British. This is understandable, because the British experts in the early 1950s were the most knowledgeable in the field of engine, is the Foundation of world aviation. However, it all started with the study of aerodynamic configurations a variety of schemes – from the classic with the tail to “duck” – with the destabilizer and placed it on the Elevator.
In the end, I came to the conclusion that the most appropriate scheme ATP is the devil-hostka. This way went the Americans during the creation of bombardirovschika XB-70, the British and French during the development of the “Concord”.
After the British to design such aircraft began in OKB-23 under the leadership of V. M. Myasishchev, and was made far-reaching conclusions concerning the choice of the main parameters of both airplane and its engines. But since myasishcheva in 1960, was removed from the design activities, appointed chief of TSAGI, the laurels of the Creator of the PCA went to the OKB of A. N. Tupolev.
In 1965, when at the next Airshow in Paris showed the model of the Anglo-French Concorde and the Soviet Tu-144, decided on the SPS and in the USA, and the winner of the competition of preliminary projects came the company “Boeing” with a very ambitious and unrealistic project super fast (the number M=2,7) aircraft with increased capacity and coming into fashion a variable sweep wing. The complexity and, I would say, the absurdity of this project, unable to bring airlines profits revealed pretty quickly. Then experts of “Boeing” moved on to more real, but the rest of the paper project SST classical scheme. The development of SPS in the U.S. stopped in the early 1970s, but research in this direction has not ended. However, reports of overseas information in the foreseeable future amid the ever-increasing cost of oil and shake the world financial crises create in the United States, SPS are not expected.

First flight of the prototype Tu-144. 31 Dec 1968
In the end, the leaders remained the Anglo-French Concorde and Russian Tu-144. To the development of the Tu-144 OKB-156 began in 1961, after the chief of the CAF E. Loginov has approached the government with a request to proceed immediately to the creation of ATP for Aeroflot. Only after this industry “stirred” and the first responded in OKB Ilyushin, suggesting the sketch of the PCA. Then had their say and the experts of OKB-156, to intensify work in this direction.
In early 1962 D. F. Ustinov, P. V. Dementyev, and A. N. Tupolev in the report of the CPSU Central Committee reported, in part: “In accordance with the instructions of the Central Committee and the State Committee on aviation technology has prepared a draft decree of the Council of Ministers on the results of the task OKB-156 on the development of Tu-144 with the following performance parameters: speed of 2,000 – 2,500 km/h, the number of passengers 80 – 100, normal operational range – 4500 km, reloading 5500 – 6000 km.
The plant № 156 will be built two flying prototype aircraft, designed for practicing the fundamental issues of the design and definition of the basic flight characteristics. The first instance will be built in 1965, second in 1966 in addition, for operational tests <…> to build in 1965 – 1967 the forces of the Voronezh plant № 18 three flight instance.
GU GVF proposes to increase the number of passengers up to 120 people and a range of set 6500 km. Given that the provision of the requirements of GUGUP unnecessarily will cause a significant increase in takeoff weight, g cat with this proposal disagree …”.
Six months later, E. Loginov in a letter sent to the government, said the poor progress of the ATP (the topic is not funded), and expressed the wish to have two types of supersonic passenger aircraft. The first was calculated to transport 120 passengers at a distance up to 3500 km with a reserve of fuel for range of 1000 km and with a smaller pay-load in the reloading option – at a distance of 4500 km. the Development of two prototype machines of the first type with Tumansky engines and a cruising speed of 2500 km/h it was proposed to entrust Ilyushin and P. O. Sukhoi. 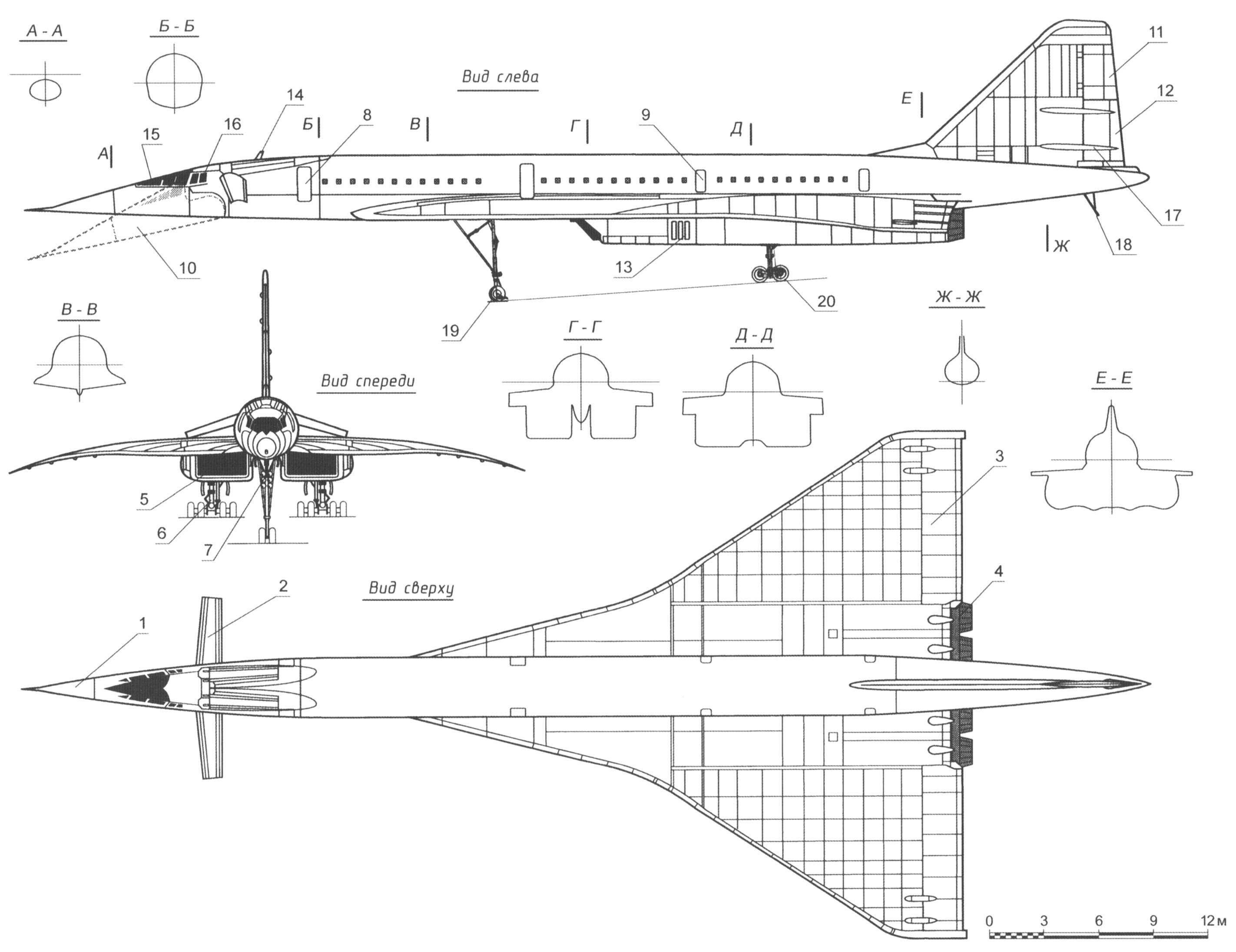 The Tu-144:
1 — radio-transparent Radome of the antenna of the radar “Groza-144”; 2 – with the front wing; 3 – Aileron; 4 – adjustable jet nozzle of the engine NK-44A; 5 – air intake device of the engine; 6 – main landing gear; 7 – the front landing gear; 8 – door; 9 – the emergency door; 10 – nose cone in a landing position; 11 – dorsal fin; 12 – rudder; 13 – fold makeup auth user air; 14 – antenna command radio; 15 – the glazed nose fairing; 16 – glass cockpit; 17-opticality rudder; 18-tail safety heel; 19-wheel size 950×300 mm (2 PCs); 20 – wheel size 950×400 mm (8 PCs. on two trucks)
A second type of aircraft with engines N. Kuznetsova or S. Izotova, or Cradles (all indeterminate), designed to carry 140 passengers with a speed of 2300 km/h at a distance of 4500 km (with fuel reserve per 1000 km) or lower load and overload weight at a distance of 6500 km offered to charge Tupolev. These aircraft were supposed to start flight tests in 1965 and commissioned in 1967
In October 1962, the Tupolev has developed another version of the draft government resolution on the establishment of the future Tu-144, based on (according to tradition) the layout of war supersonic bomber Tu-135 with a Delta wing.
But in the government job results for PCA are not in a hurry, and only a year later by the Council of Ministers and the CPSU Central Committee of 16 July the construction of the first Tu-144 was assigned to the OKB-156.
In the 1950s, OKB-23 was determined one of the most important conditions needed to create a competitive ATP – required values of parameters of the power plant. In particular, the specific fuel consumption of the engine at a maximum cruising speed must not exceed of 1.12 kg/kgf per hour. But this engine had to create, and the whole experience of motors shows that it will take at least ten years.
The only choice for SPS turbofan in the early 1960s, was NK-6, which was developed and Tu-135. But its parameters, including specific fuel consumption, is not allowed to create ATP with the required performance characteristics. For example, cruise flight when flying at a speed corresponding to the number M=1,7 at an altitude of 11 km, the specific consumption of fuel in more than one and a half times higher than required.
Much better data had project NC-10, but it remained on paper.
In the end, there was dual NK-144 with a multi-stage afterburner, created on the basis of the gas generator subsonic turbofan engines NK-8, which was widely used technical solutions, implemented in MK-6. But his options left much to be desired. NK-144 at the takeoff thrust of 17,500 kg had a specific fuel consumption at cruising supersonic mode when in afterburner of 1.56 kg/kgf per hour. Tell that dual NK-144 was made on the consideration that part of the route of flight of the PCA will be carried out at subsonic speed, but the main mode of the Tu-144 – supersonic.
For comparison, single-circuit TURBOJET “Olymp” 593 MK.610 developed jointly by the companies “rolls-Royce” and SNЕСМА for “Concord” was developed at takeoff thrust 17 200 kg and had a specific fuel consumption at cruising 1.19 kg/kgf per hour, which slightly exceeded the value defined by the specialists of OKB-23. 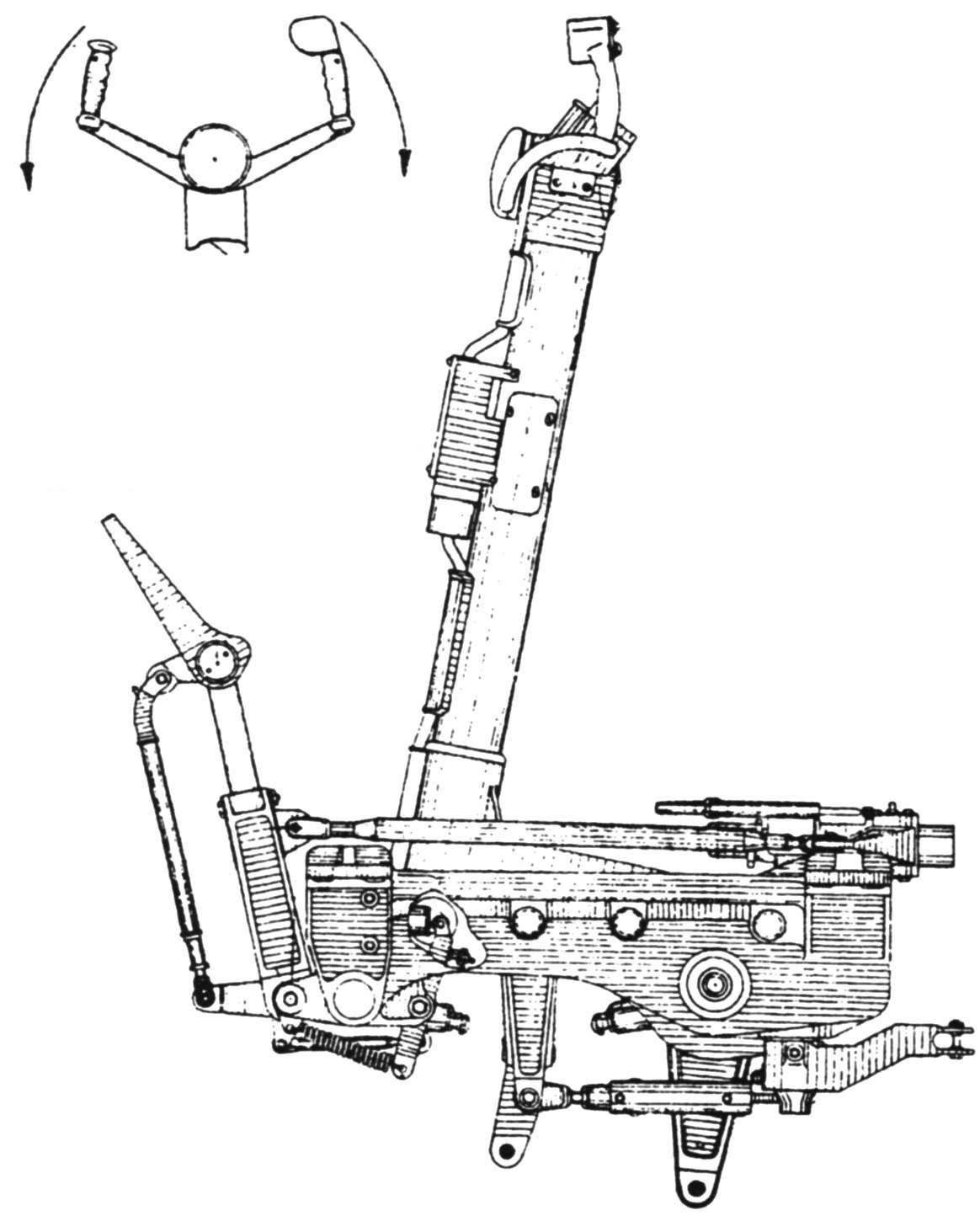 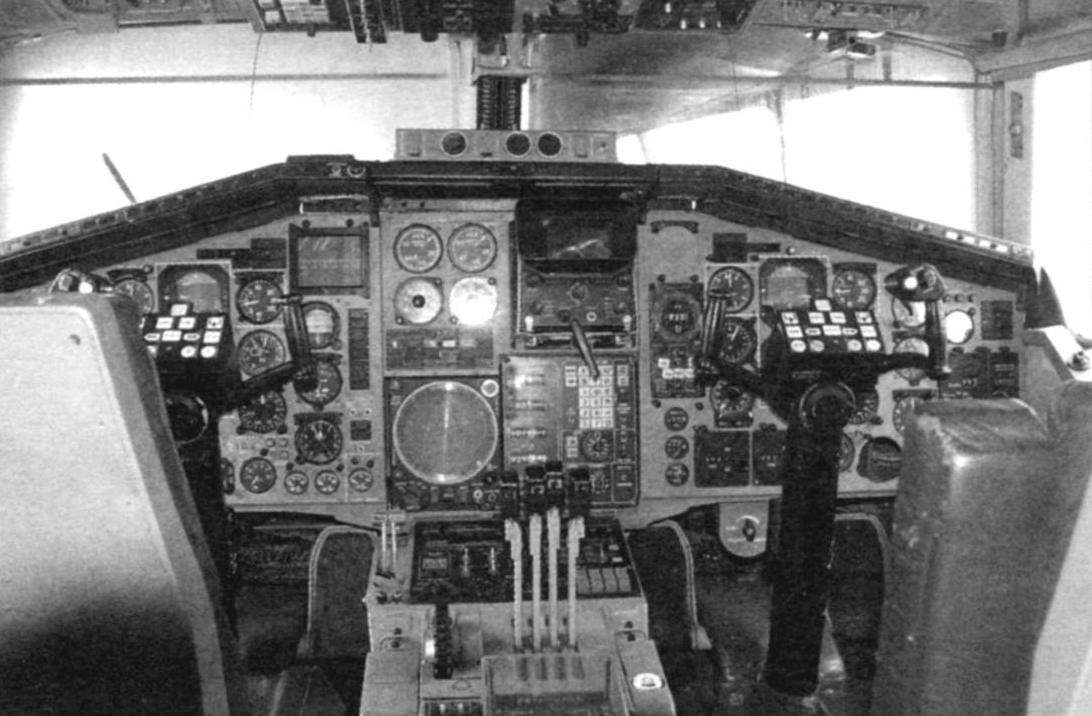 Multislot front wing
Main (left, no load) and front (right) landing gear
The design of the future Tu-144 began in the Department “K” of the Bureau, engaged in the development of unmanned aerial vehicles. The chief designer and supervisor of the subject appointed A. A. Tupolev. In the future, after the death of A. N. Tupolev and the appointment of his son head of the company, the creation of the Tu-144 was led by B. A. Ganczewski and Yu. N. Popov.
The construction of the first prototype Tu-144 began in 1965 at MMZ “Opyt” in broad cooperation with other enterprises of the map. At the same time built a second instance of the machine for static tests. Since the mid-1960s, formed the preliminary shape of the Tu-144, in the summer of 1965, on the eve of the opening of the next show in France, the Soviet press announced it to the whole world. This openness was struck not only by Soviet citizens but also foreigners. Surprised and claimed the flight data of the machine: the speed of 2500 km/h and flight range of 6500 km.
In 1967 finished the Assembly of the major components of the aircraft and at the end of the year he was transferred to the Moscow region town of Zhukovsky Flight test and development base OKB (Lidb), where for the next year was carried out final Assembly, ground tests and preparation for first flight.
It should be noted that the first prototype of the PCA was not a passenger car, because it has taken unprecedented security measures. Suffice it to say that for the crew provided ejection seats and the pilots assigned to the Tu-144, had to fly the experimental plane-the analog of the MiG-21. Moreover, the SPS after the Tu-104 has returned to the brake parachute to reduce the landing run.
The first prototype of the Tu-144 was prepared for testing in late 1968, but raise it up in the air due to bad weather happened only on 31 December. The plane was piloted by honored test pilot of the USSR Eduard V. yelyan. The crew also consisted of co – pilot M. V. Kozlov, flight engineer Yu. T. Seliverstov and chief engineer V. N. Benders.
Tests of the Tu-144 was pretty slow. So, sound barrier car for the first time surpassed the 5 June 1969, and on 15 July 1970, reached a top speed of 2443 km/h, which corresponds to the number M=2,35.
The first foreign trip took place in may 1971, when the plane went to the international Airshow in Le Bourget with a stopover in Prague. After the end of the cabin of the Tu-144 landed at the Berlin airport (Schoenefeld), but shortly after the flight to Moscow on June 17 made an emergency landing in Warsaw because of the tightness of the fuel system.
From 6 to 14 September of the same year, he took flight at supersonic speed on the route Moscow – Sofia, which spent 1 hour 19 minutes. The return flight went a little faster.
In 1972 the plane was shown in Hannover and Budapest. The last time the first prototype Tu-144, have committed more than 120 flights a total duration of 180 hours, including 50 hours at supersonic speeds, took to the air on 27 April next year. After this he stood at the fence Lieb, waiting their turn for disposal.
While I tested the prototype, July 1, 1971, soared pre-production Tu-144, and it was a completely different car. In comparison with the first prototype aircraft has undergone significant changes. First of all, changed the aerodynamic configuration of the wing, which will have a geometric twist, but more sophisticated design due to the transition from the ogive shape in plan to direct the front edges. On the forward fuselage positioned front, retractable simultaneously with the chassis, a highly mechanized wing (“whiskers”), transforming the car to the biplane, however, on landing modes.