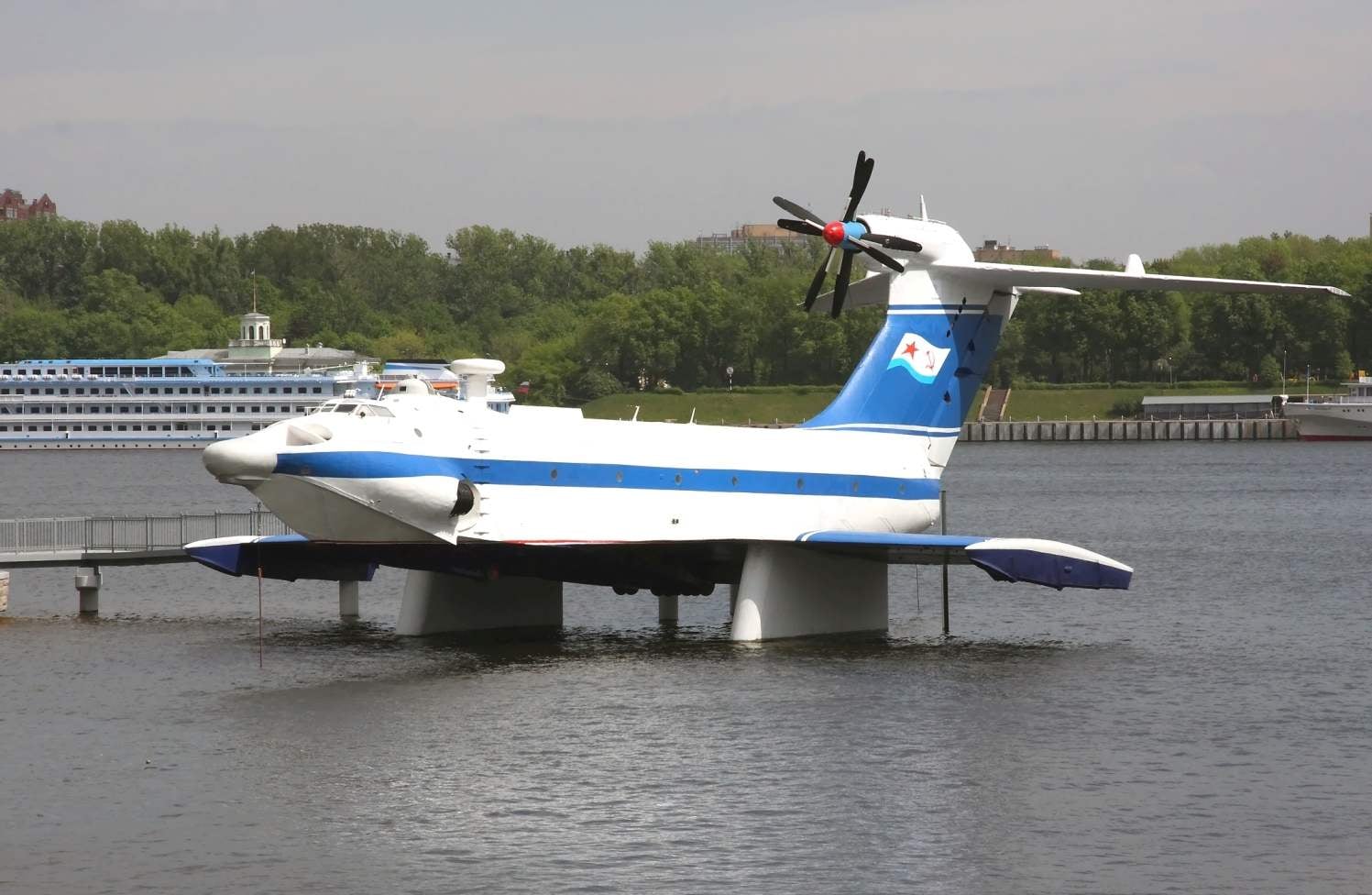 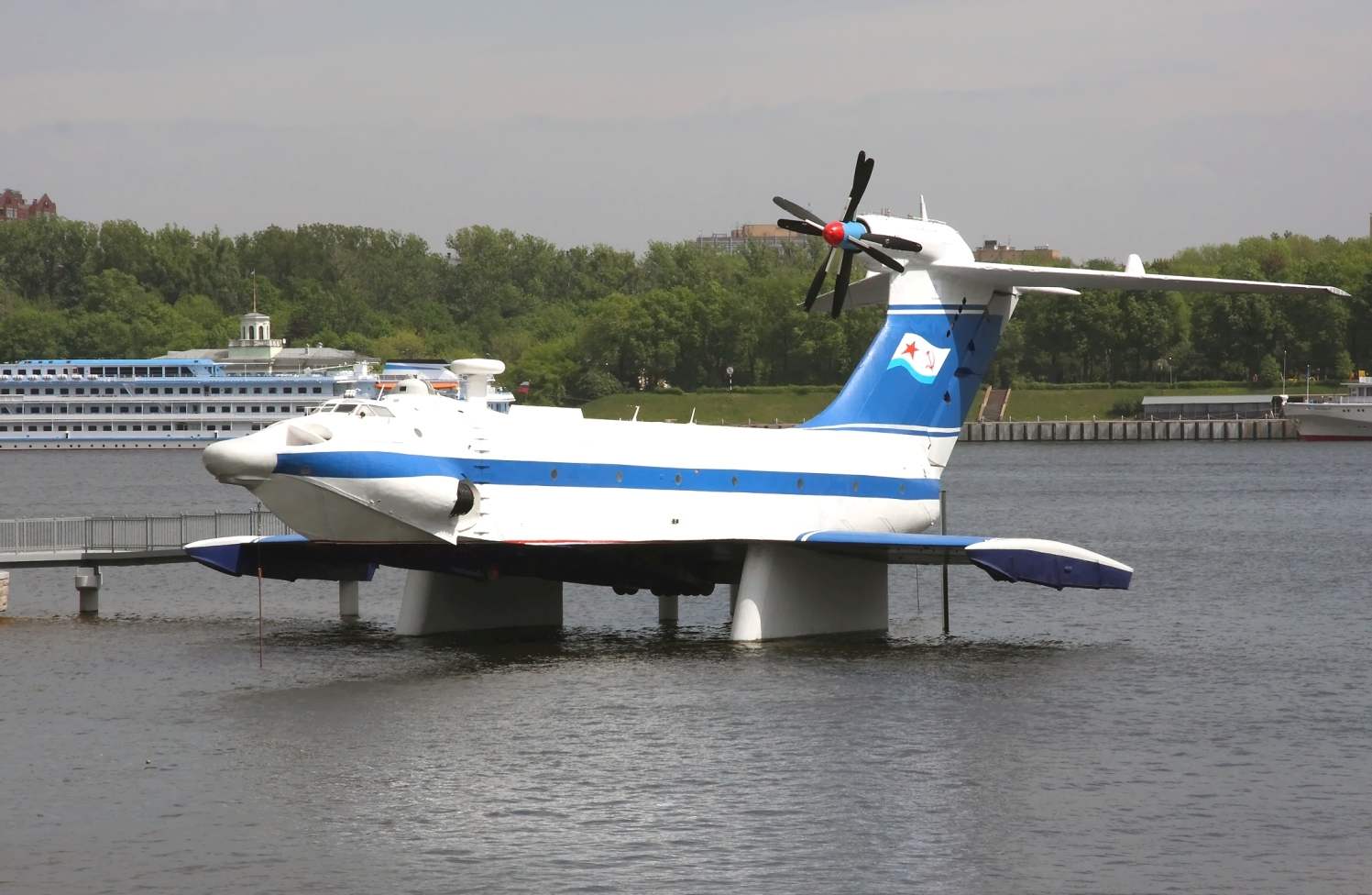 at the beginning of last century, the pilots noticed that the landing of the aircraft when the height was commensurate with the chord of his wing, there is an additional lifting force, and became more volatile. “The nature of The” additional forces did not understand but came up with the name: “airbag”. Later, after the emergence of the theory of inductive resistance with this phenomenon understood, and it received a scientific classification: “proximity Effect of the earth.” Subsequently, this effect is divided into two components: dynamic air cushion that is created due to the inhibition of air flow under the unit and its supporting surface, and the effect of ground proximity, which is tied exclusively to decrease the inductive component of the aerodynamic drag of the wing.

Additional lift (dynamic air cushion) and a lower inductive reactance increase aerodynamic efficiency (the ratio of the coefficients of lift and drag), and therefore, the range and payload of the aircraft. In the Soviet Union, one of the enthusiasts of the flying vessels was the R. E. Alekseev. His experiments on self-propelled models are pretty quickly convinced the military of the advantages of a new class of aircraft.
In 1964, Central design Bureau for hydrofoil (CKB po SPK) started to create a transport and assault wig T-1 (project 904) weighing 105 tons, received at the beginning of the 1970s marking “the Eaglet”. It was preceded by a double self-propelled model SM-6 takeoff weight of about 26 500 kg. Its development began in the fall of 1969, and the launching took place in 1971
Under the scheme SM-6 was more like a plane: low wing, T-tail. But there were important differences. So, two turbojet engine (TRD) was located inside the bow of the hull, on the upper surface which were their air intakes, significantly lowered the probability of hitting the engines sea water. Propulsion turboprop engine (TVD) placed on top of the keel.
As follows from published materials, as engines destined for blowing under the wing and acceleration of the apparatus, was used a couple of NK-8-4K (Maritime modification of double-circuit turbojet engines, developed for the aircraft Il-62) with a total thrust 21 000 kgs. A similar powerplant was used in “Eaglet”, which was almost four times heavier than CM-6. To place such engines with a diameter of about five feet into the narrow bow of the self-propelled models was not possible. Most likely, as the starter motors used polutoratonny AI-25 turbofan engines with a diameter of 820 mm from the plane the Yak-40. 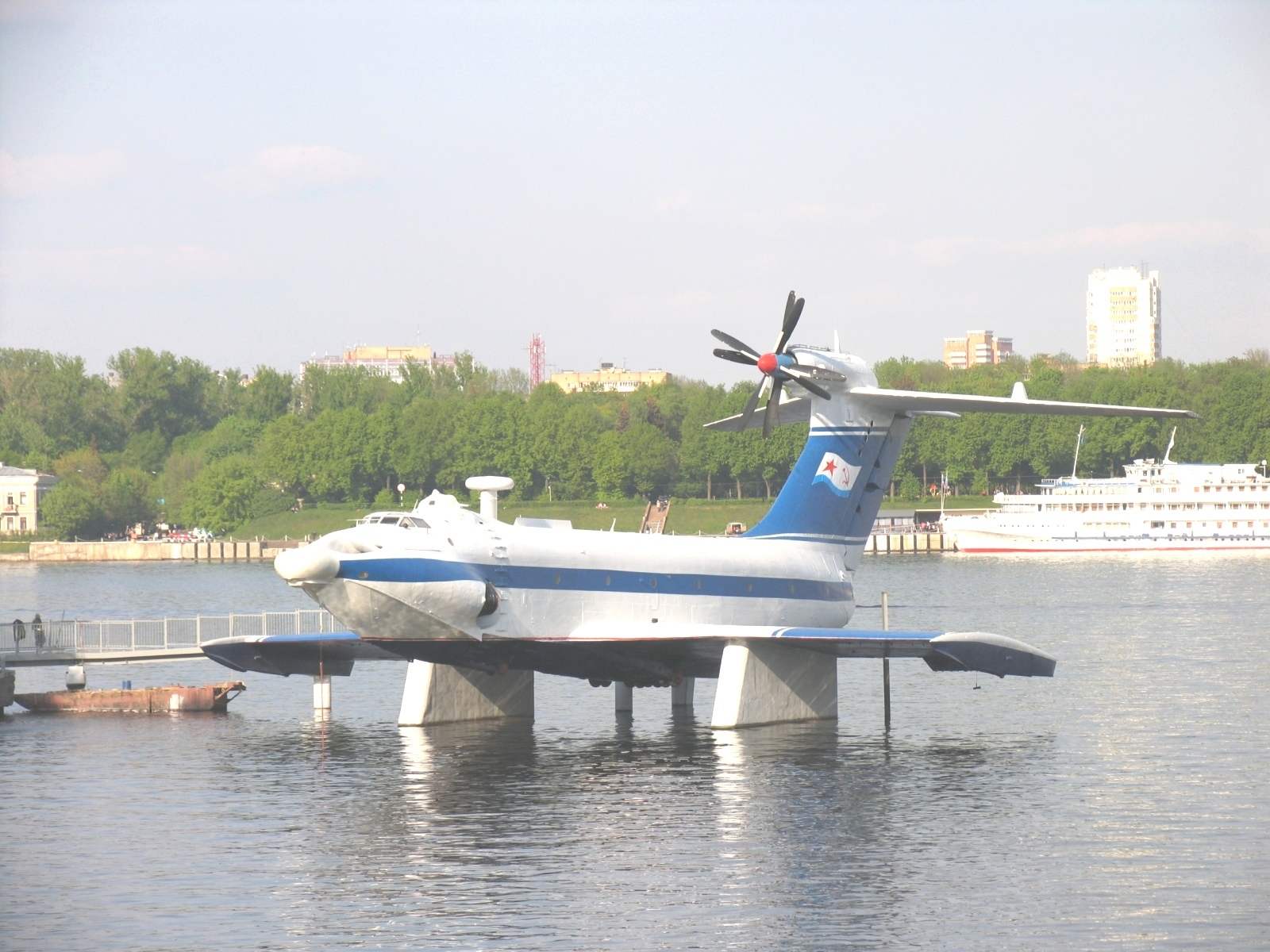 Ekranoplan “Orlyonok”
In addition, to facilitate the device off and reduce loads on the body during landing SM-6 at the agitated surface of the waters provided gidroliznaya device, subsequently used on “the eagle”.
Behind the nasal TRD was the cabin crew While the pilots were located in a row.
On top of the keel SM-6 placed main turboprop engine AI-24P with a propeller AV-72 with a diameter of 3.9 meters (in the media “walks” the information on the engine AI-20, which is not true). When this gas stream TVD was directed upwards, reducing its equivalent power — up to 2467 HP on the shaft.
After a self-propelled model was built her glider SM-6A for static tests.
The first phase of testing of SM-6, held on the Volga in Chkalovsk (Gorky region) was completed in 1971, and the following year the car was sent back for revision. In addition to the main hydrolyze mounted bow. Since the motion of the ekranoplan on the water surface even with a little excitement occurred as on a washboard, then both skis equipped with cushioning devices (LAU), and in 1974, wheel bearings, allows you to roll out not only the slip (hydropack), but also on unequipped shore
In the autumn of 1974 testing of SM-6 continued in the Caspian sea. The final shape corresponding to transport the winged, self-propelled model purchased in 1977, after equipping it with automatic control system and radioisotope altimeter “Seliger”.
This allowed the fall of that year to begin the final phase of flight research. Since the CM-6 was an experimental machine, it was made only short flights at speeds up to 270 km/h at a height of about two meters.
CM-6 was used for research until the late 1980s, and he subsequently took pride of place on the pedestal in the Caspian.
The world’s first transport ekranoplan “Orlyonok” was launched in the summer of 1972 the Unit was designed for quick transportation of troops, weapons and other equipment, operated by the Navy, including the BTR-80 and PT-76 amphibious tanks in the cargo hold with a length 21, a height of 3.2 and a width of 3 meters (according to other sources 28, 4.5 and 3.4 meters, respectively). Download of the ekranoplan was carried out via a flip-side heavy bow, where the turbojet engines NK-8-4K, cockpit and numerous equipment. It was not the best technical solution because it bend different pipes, electrical cables, complicated wiring system engine control NK-12МК and a wig in General. But I guess there was no other way. 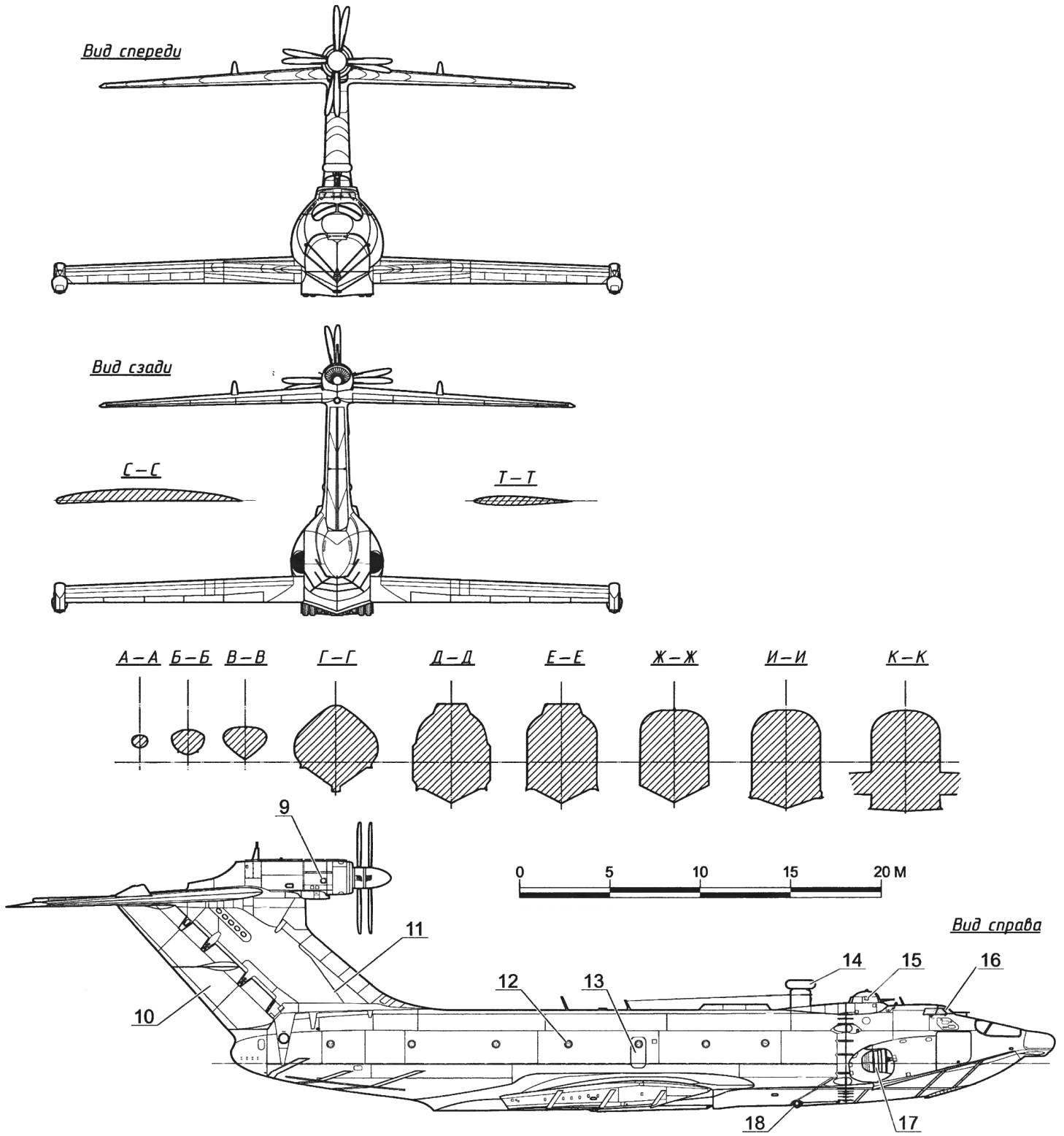 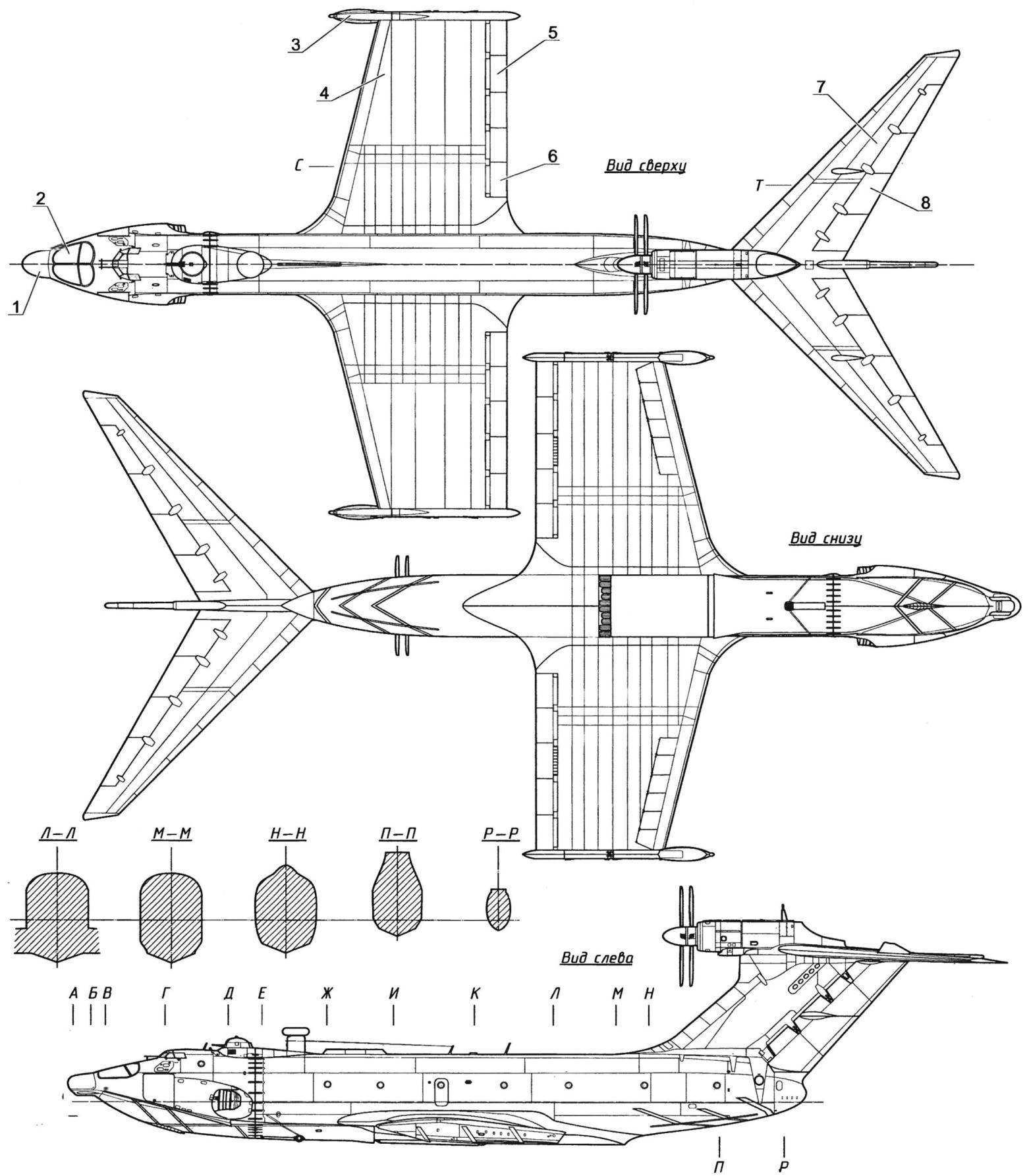 Winged “Eaglet”:
1 —fairing antenna for radar navigation; 2 —the engine air intakes of jet NK-8-4K; 3 —lateral sKey; 4 —wing; 5 —hanging the Aileron; 6 —flap; 7 —stabilizer; 8 —the Elevator; 9 —sustainer engine NK-12МК; 10 —aerodynamic rudder; 11 —Kiel; 12 —window; 13 —front door; 14 —fairing antenna search radar; 15 —machine gun “Utes”; 16 —cabin crew; 17 —rotary nozzle of the engine boost 18 —wheel nose landing gear
The ekranoplan is equipped with two starter-booster double-circuit turbojet engine NK-8-4K (subject to a replacement for the NK-87) and one marching TVD NK-12МК air coaxial rotors of AV-90. Highly efficient and reliable NDT-12МК created over fifty years ago for the Intercontinental bomber Tu-95, despite the high noise level that most closely suited for such devices. The engine NK-8-4K, equipped with rotating nozzles, used to create an air cushion and to disperse the machine to cruising speed. As in the SM-6, for the reduction of drag and protection against sea water intake devices turbofan engines NK-8-4K very well hidden in the contours of the bow of the hull.
In addition, the “Orlenok” has the auxiliary power unit TA-6A, required to run the engines NK-8-4 and NC-12МК.
To reduce the shock loads on landing modes used hydrolyze as the simplest deflected flaps with a wheeled chassis for movement on the slipway and coastal paths with an artificial surface.
Estimate the weight impact of the airplane useful load (payload, fuel and crew) shows that it does not exceed 27%. For the transport unit is not enough.
Except for a main mode near the water surface, the “Eaglet” was able to fly away from the screen like a regular plane. But the maximum value of the aerodynamic quality while significantly smaller, which directly affects the range.
On the “eagle” provided two radar stations. Surveillance radar is located on top of the housing, and the other for scanning the shore line, — in the bow. This established all-weather and kruglosutochno application.
Stripping of the landing area and protect the machine from the enemy intended a double-barreled machine gun “Utes” 12.7 mm placed in a deck installation with a circular firing.
First flight of the prototype of the “Orlenok” was held in 1972 on one of the tributaries of the Volga river, after which it, under the guise of the Tu-134 was loaded on a barge and transported to a naval base in the Caspian (Caspian sea coast), where he passed the main factory testing.
According to the classification of those years “Eaglet” ekranolyot was capable of flying as close to the interface of two media and away from its borders. Much later, when it was introduced to international classification, these vessels became known as the wig.
Almost two years of flight tests of the prototype of the “Orlenok” was held without incident. But their completion is not enough main results of static tests of the case on the strength of the second instance of the device. Stationed in Kaspiisk, Deputy head of the Main Department of the Ministry of shipbuilding industry had urged Alekseev to continue the test (for a report on the implementation of the plan), and Rostislav E., persuaded, and signed the flight manifest required practicing take-offs and landings along and across the waves. Perhaps this decision was influenced by the fact that shortly before that in the “Orlenok” drove the whole delegation, which included about 40 passengers, headed by the first Deputy Minister of shipbuilding. 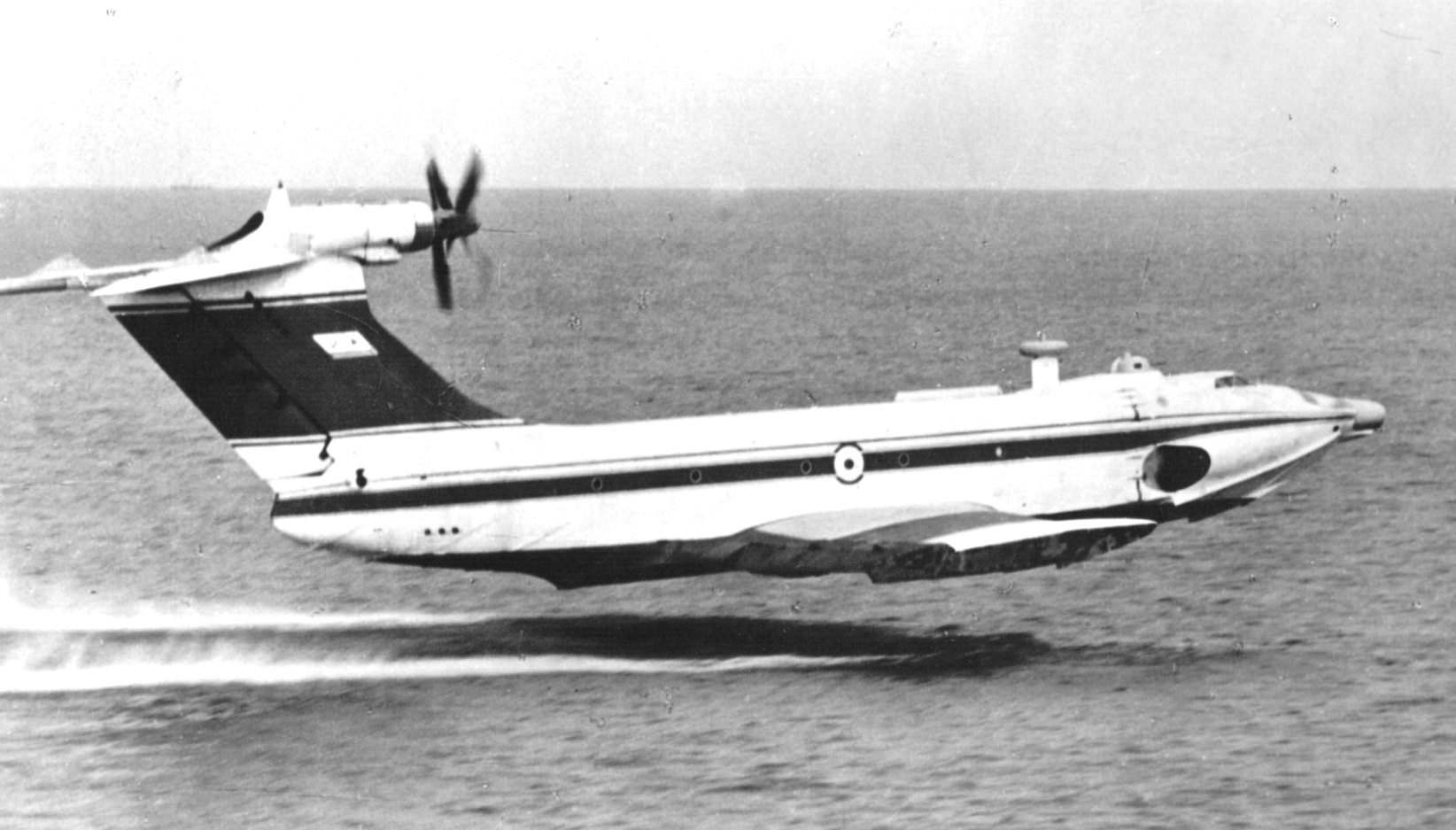 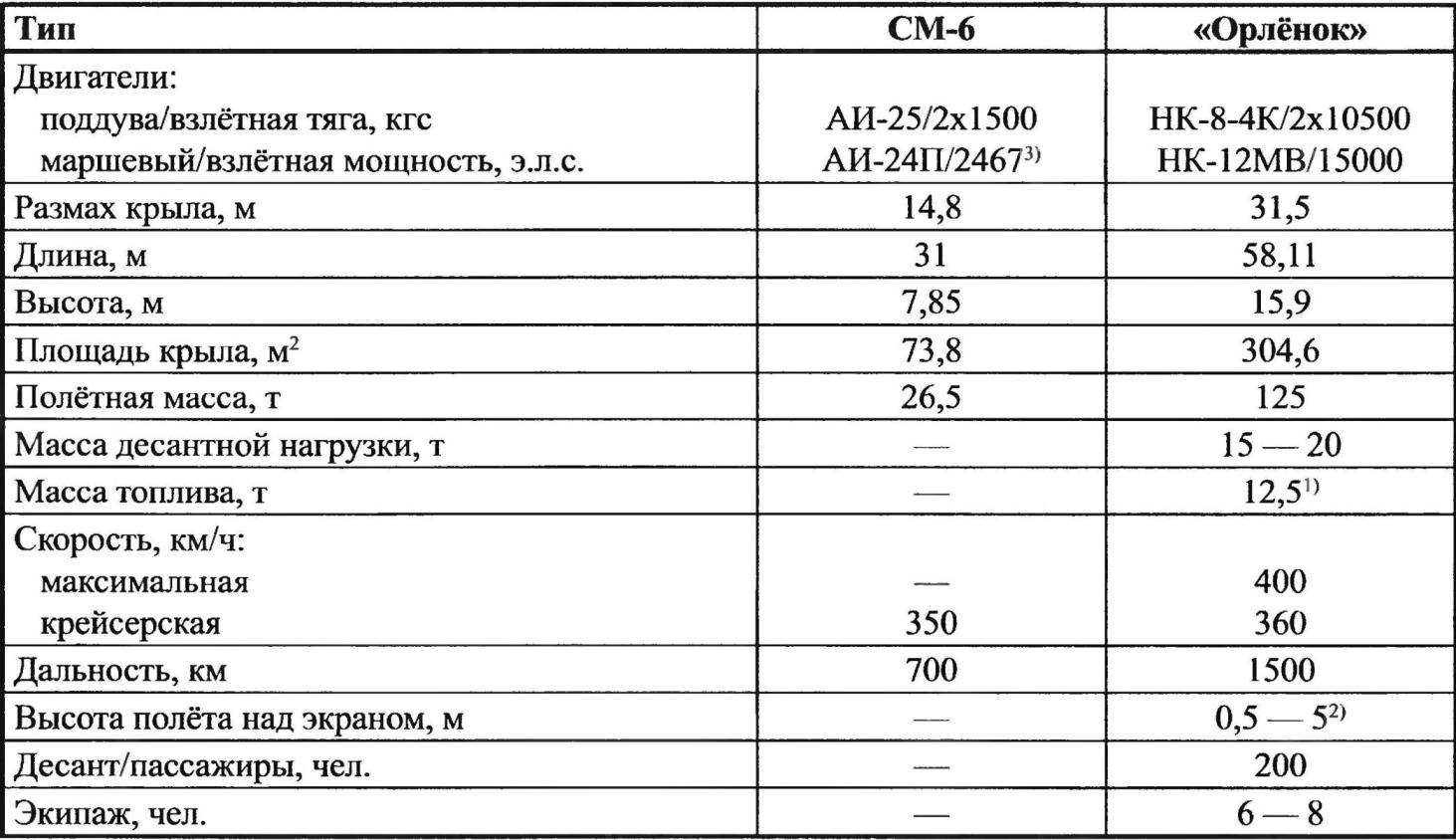 Chassis — retractable, includes two hydrolyze for takeoff and landing on water and castors. Front gidroliza located under the bow part of the hull, and the main — in the heart of the center of mass. Hydrolyze Both have a damping device.
Chassis, designed for movement on land, includes rotary nose strut with two wheels and main landing with ten wheels on independent suspensions. Wheel non-braking.
Cleaning the nose is in the front niche of the body, and main landing — Bay, partially closing hydrolyze.
The main structural material of the airframe is aluminum alloy AMG-61. In the separate units and aggregates are applied steel and composite materials. Protecting the airframe from corrosion — electrochemical coating with appropriate paint.
The control system of wig — hard, with irreversible hydraulic actuators. The production and cleaning of flaps and landing gear are also made with a hydraulic system. Piloting of the machine is possible both in manual and in automatic mode.
Navigation system includes a navigation radar located in the nose of the hull, and the review radar. The search radar antenna located in the fairing on the pylon on the top of the case for machine-gun.
The wig has a full range of aviation and ship navigation lights. In the forepeak is acinonychinae device. The anchor is retracted into the hawse — hole in the fore part of the body. On Board the airplane, there are inflatable life rafts and inflatable motor boats.
Armament includes installation with dual machine gun “Utes” 12.7 mm. If necessary, you can use his gun crew and paratroopers.
The crew of six men: commander, the second pilot, mechanic, Navigator, radio operator and gunner. When transporting troops in the crew also have two technicians.