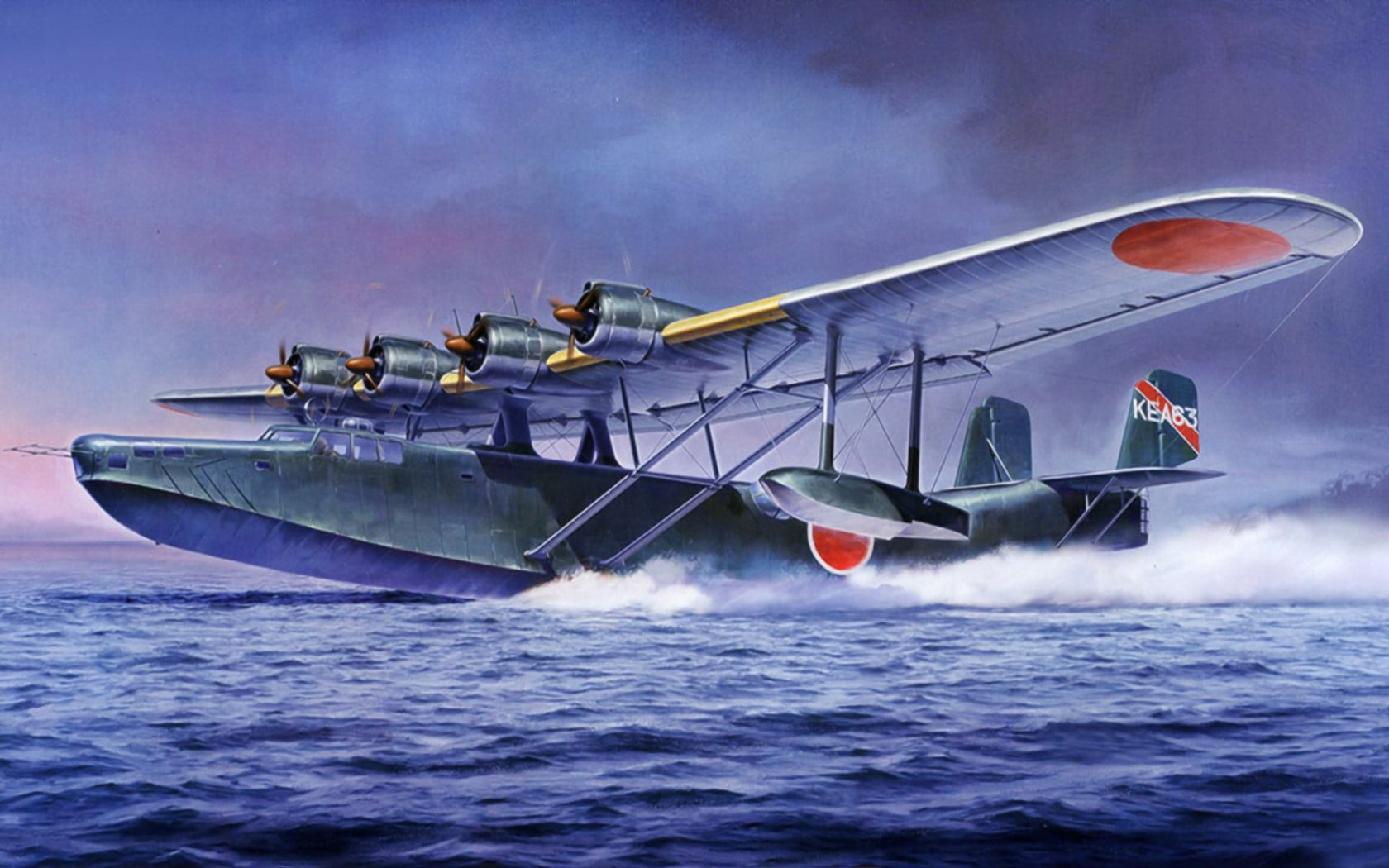 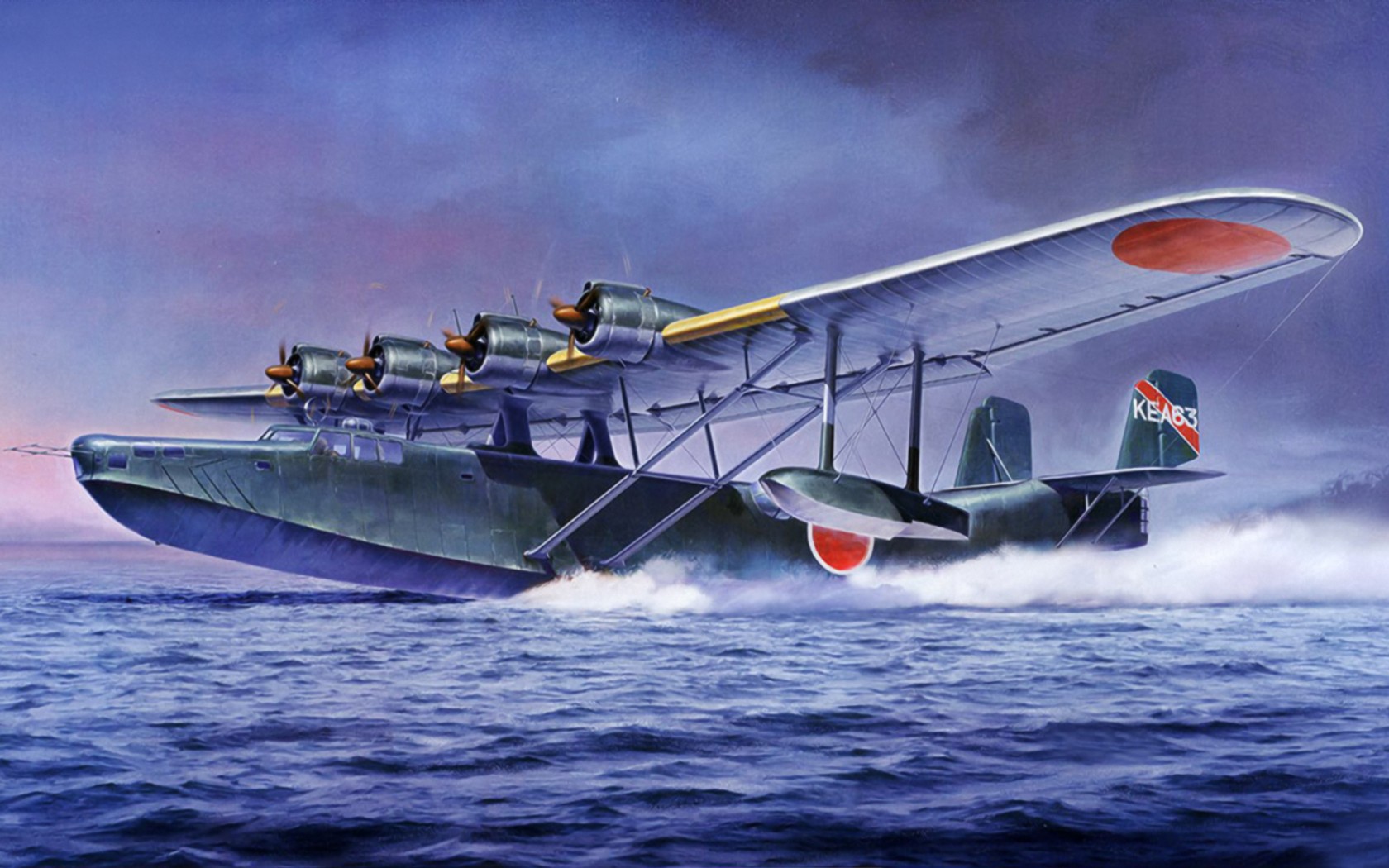 The seaplane Kawanishi H6K and H8K. On the eve of the Second world war, Japan was among the few countries, which fleet was armed with large multi-engined flying boats ocean class. The need for such aircraft for Japan was conditioned by geographical position of the country and the enormous Maritime areas to which it applied.

The main task which relied on large flying boats were long-range Maritime reconnaissance, transport of goods and torpedo-bombing attacks on ships and naval bases of potential enemy. This was the reason for fairly high requirements for maximum range, speed and bomb load of the aircraft.
In early 1933 the leadership of the Japanese Navy proposed that the aviation firm to develop a Kawanishi flying boat with the appropriate characteristics. Firm Kawanishi already had some experience of production and development of flying boats—it produced them under license Short “Calcutta”.
By the end of the year, the engineers Yoshio Hashiguchi and Shizuo of Kitahara has developed two projects — “Type Q” (four-engine monoplane) and “R-Type” (three-engine monoplane). Model seaplanes successfully completed the purge in a wind tunnel and tested in water tank, but the military did not accept these projects. The main reason of failure was the results of the test in March 1934, the American boats S-42 Igor Sikorsky who demonstrate the characteristics — maximum speed 300 km/h, a cruising speed of 233 km/h and flight range of 5,000 km with a 700 kg load.
The air force leadership of Japan had to revise its requirements to the characteristics of large flying boats. However, the machine Sikorski was a passenger, and the new combat aircraft had to carry defensive armament and bombs on the external load, so that the performance characteristics of the latter was less prominent due to the greater drag. In accordance with the new requirements of the Japanese four-engine seaplane was to have a range of not less than 4630 km with a bomb load of 800 kg and a cruising speed of 220 km/h.
Since the task designers coped Kawanishi company in the shortest possible time developed a new project “Type S”. Externally, the car was somewhat similar to S-42: she also had a high-wing type “parasol”, four carefully zakuporennyh engine and dvuhkilevoe empennage. However, the shape of the fuselage and the cockpit resembled those that were in flying boats of the company Short. Thus, the group Hashiguchi and Kitahara managed to combine in one project the best of what there was in Russia at the time. As a result, Japan came to possess one of the largest flying boats for military purposes.
Right wing of a seaplane was located over a sealed enclosure on two racks made in the form of an inverted Latin letter V, and intensified with each of the sides of the fuselage by two parallel struts. The stability of the boats on the water during taxiing provided the fixed wing floats. In the spacious fuselage housed the fuel tanks, equipment and space for ten crew members. The armament, consisting of two 400-kg torpedo or bombs weighing up to 1,000 kg, was supposed to hang on the pylons in the middle of the struts. Defensive armament consisted of three 7.7 mm machine guns in the open firing points.
The first flying boat, piloted by test pilot of the firm Kawanishi Katsuji Kondo, was held on 14 July 1936. The flight was fine, however, Kondo noted that the seaplane is pretty hard left on redan. The firm responded fairly quickly, on the same day, moving the redan 0.5 m ago. Ten days later the aircraft was transferred to the Navy, and its further testing was carried out by military pilots.
In 1937, he was released two more cars, differing the increased area of the ailerons and stabilizers, as well as a more comfortable top of a rifle, which was covered with a transparent blister. All planes were nine engines “Hikari 2″ firm Nakajima maximum power of 840 HP— military rightly considered them too weak for this plane. Further, simultaneously with the delivery of the fourth boat in 1938, it is, and on the first and third set chetyrnadcatiletnie engines”, kinsei 43″ (Kinsey with the Japanese. the gold star) and Mitsubishi with a capacity of 1070 HP These engines were equipped with the aircraft DC-3 in Japan and float scouts Е13А firms Aichi.
After all these changes, the boat began to more fully meet the requirements of the fleet, and it was adopted. In accordance with the national designation system for aircraft 1920 seaplane called the “Type 97 Flying boat Model 11”. The type number was indicated the last two digits of 2597 year of Showa (the reign of the dynasty of Emperor Hirohito) on the Japanese calendar, corresponding to 1937 when the aircraft was put into service. Well, the designation “Model 11” correspond to the 1-series and the 1st version of the aircraft. In the late 20-ies to simplify the names of the Japanese Navy introduced a system of notation using Latin letters — the boat was called Н6К1 — 6th Kawanishi seaplane company of the 1st modification. The first letter indicated the type of aircraft, the second the manufacturer. This system was created based on the American system of 1922 and, due to its simplicity, is commonly used in historical literature. In Japan used both systems.
Following continuous modification of steel flying boat Н6К2; to April 1940 was released ten of them, differing from the first composition of the equipment. The seventh and eighth boats were converted into transport aircraft Н6КЗ used by the airline “Airlines of the great Japan” for the carriage of VIPs. The firm offered to continue serial production of the vehicle modification and have already built two new planes Н6КЗ, but the Empire was preparing for a big war and Navy demanded the release scout-bomber Н6К4 (“Type 97 model 22”).
Н6К4 had increased to 11 166 liters of fuel, allowing to increase the flight duration up to 25 hours and a range of up to 6000 km of the Upper machine-gun turret was replaced by two teardrop-shaped projections on the sides of the fuselage with a 7.7-mm machine guns in each, and the tail small point equipped with a 20 mm cannon. During operation of the aircraft power plant was replaced by a 1200-horsepower engines, “Kinsey 46” or “kinsei 53”. Serial edition version Н6К4 began in 1939 and ended in 1942. Just built a 127 aircraft. 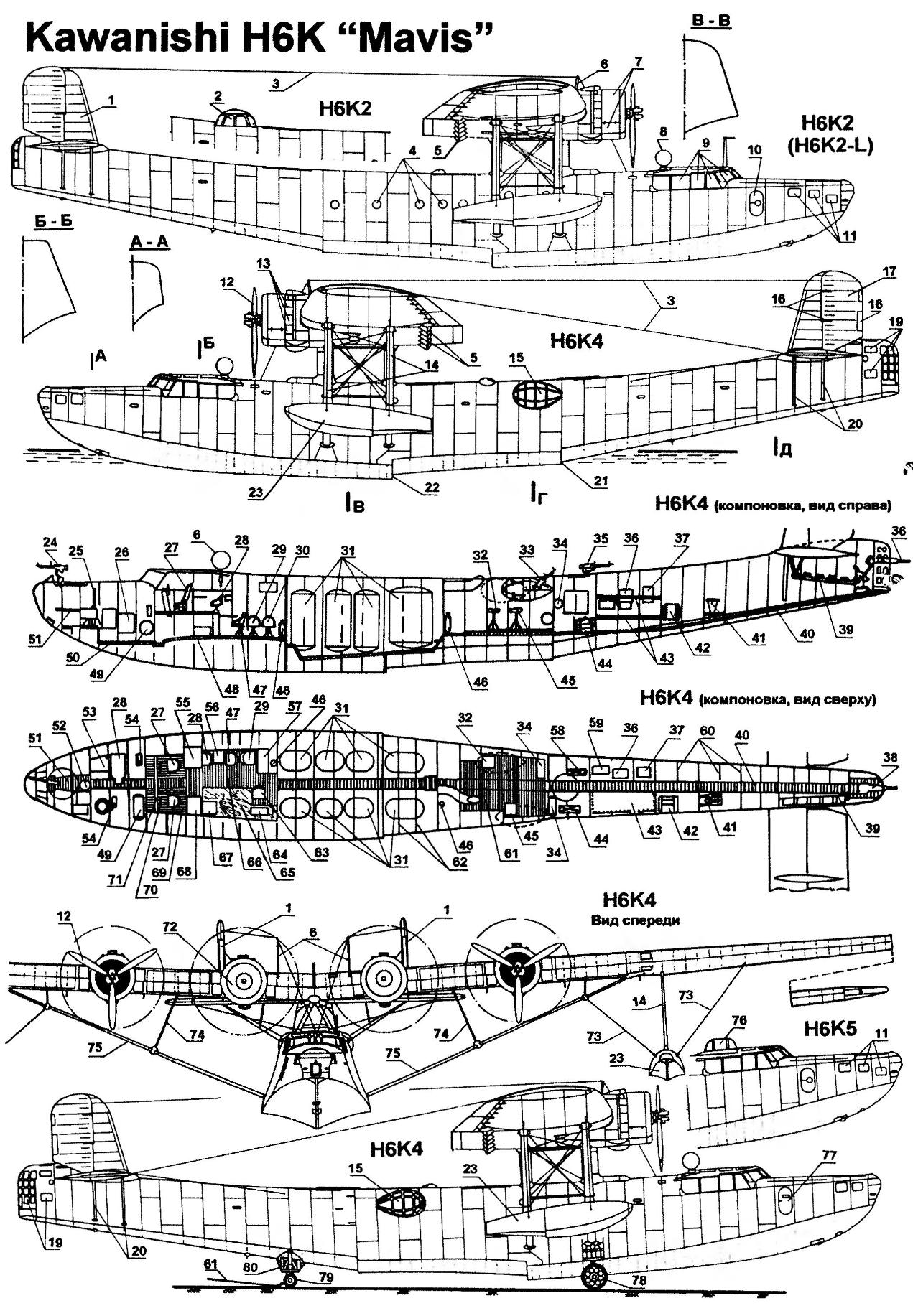 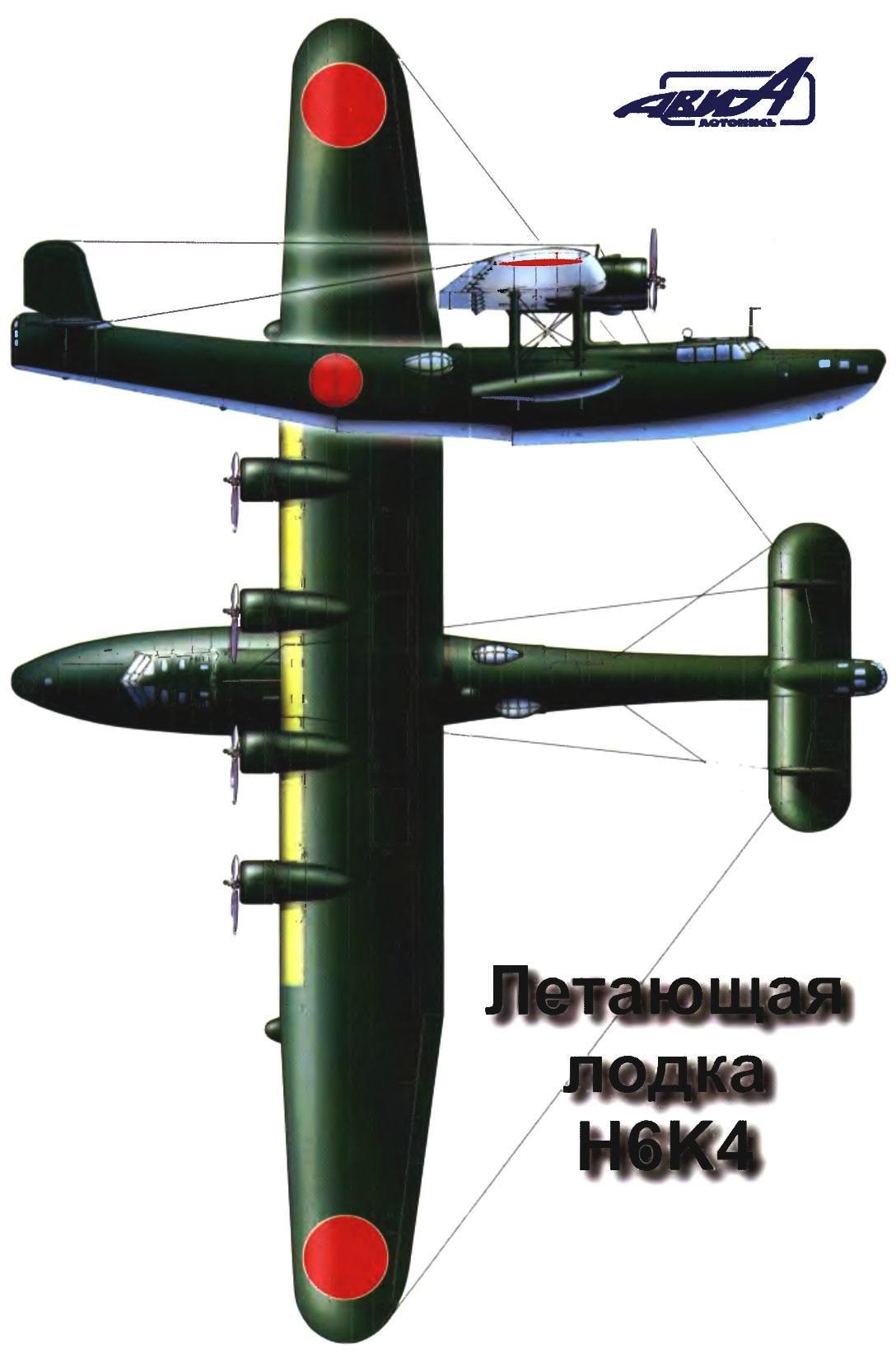 Structurally the wing consisted of three parts — a center section of increased span and two detachable consoles. The struts (two on each side) was connected to the lower part of the fuselage with the wing. From the middle of each of the main struts was moved to the wing of the additional support legs — connection was located hardpoints bombs or torpedoes. Supporting underwing floats were attached to the two wing-shaped struts and wire braces.
The mechanization of the wing was presented the ailerons, flaps and brake flaps. The ailerons occupied the entire rear edge of outer wing tips, and flaps — the entire rear edge of the wing. Control ailerons hard, from the helm. Flaps and brake flaps produced during rotation of the handwheels, located respectively right and left of the pilots seat.
Four engines mounted on Motorama center section, and behind them, between the second and third frames, were six fuel tanks.
The power plant of the aircraft Н6К1, Н6К2, H6K-2L, Н6КЗ and the first 119 aircraft Н6К4 consisted of four 14-cylinder double row engine air-cooled Mitsubishi”, kinsei 43″ with a maximum capacity of 1,000 HP (990 HP at 2,000 m). Aircraft Н6К4, H6K4-L was equipped with motors “Kinsey 46″ with a capacity of 1,070 HP (at 4000 m). 1100-strong”, Kinsey 51 ” or 1200-strong “kinsei 53” mounted on Н6К5. All engines worked with a three-blade metal propellers variable pitch “Sumitomo” with a diameter of 3100 mm.
Performance characteristics H6K

Tail dvuhkilevoe posted. The vertical tail was installed on top of the horizontal stabilizer is two washers with rudders. The stabilizer was fixed on the fuselage with a pair of additional struts. To reduce the effort on the steering wheel and the pedals control the rudders and Elevator were equipped with trimmers. Rudders — the cable from the pedals and steering wheel. Control trimmers from small starwarscom located on the sides of the cockpit.
Armament was represented by defensive shooting and bombing and torpedo. Small, depending on the modification consisted of three 7.7 mm machine guns “Type 92” or from four or five 7.7 mm machine guns and the rear 20-mm cannon. On the modification Н6К5 hung bombs weighing up to 1600 kg or two 800-kg torpedoes. From 1942 on some boats began to install radar station Type “N-6”, is designed to search for aerial targets. The power of the transmitter with a wave length of 2 m was 2 kW, multiple aerial target radar was discovered at a distance of 100 km, and a single aircraft type of bomber at a distance of 70 km radar Weight -100 kg.
N. Food reserve was, A. CHECHIN, Kharkov