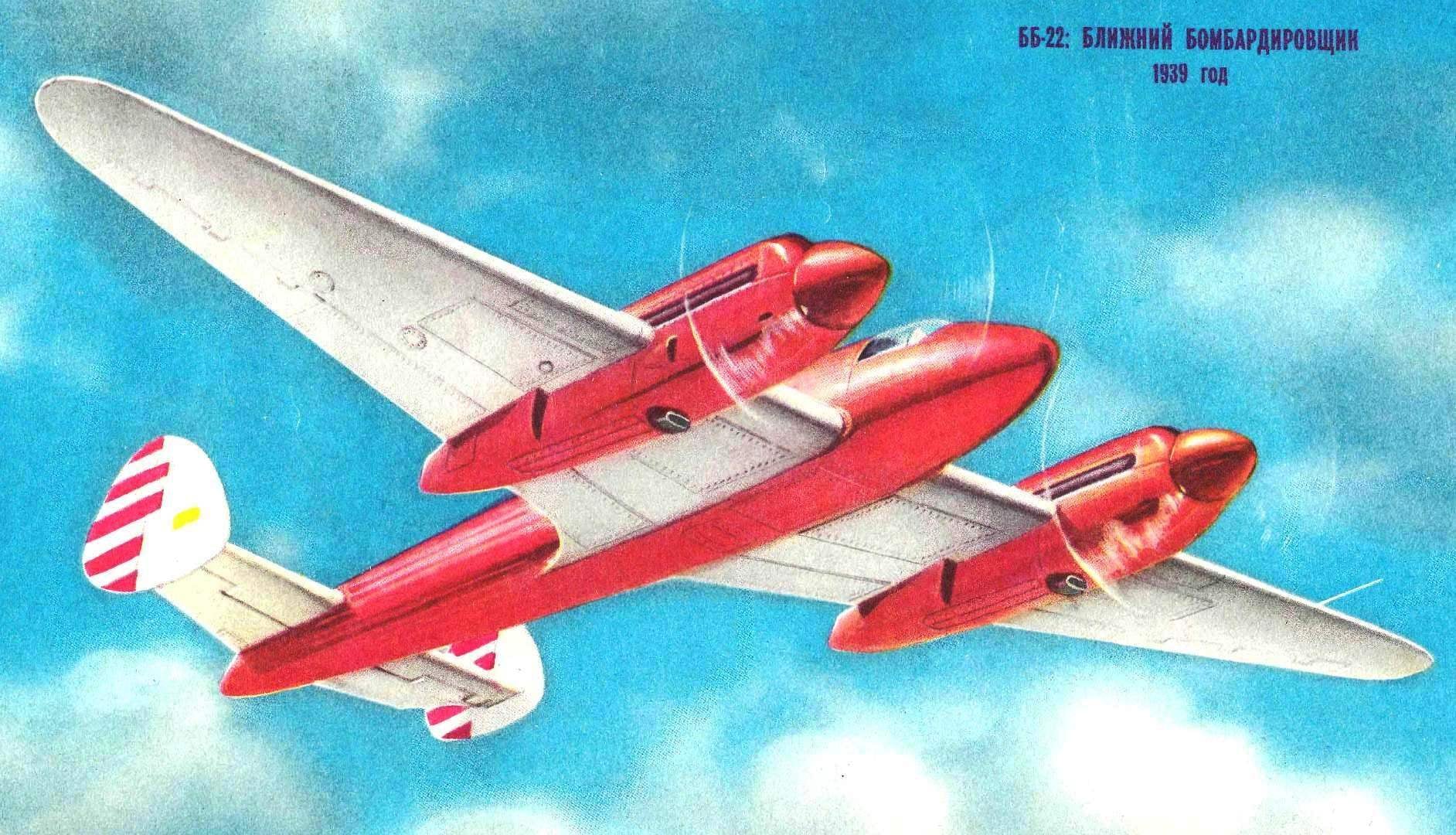 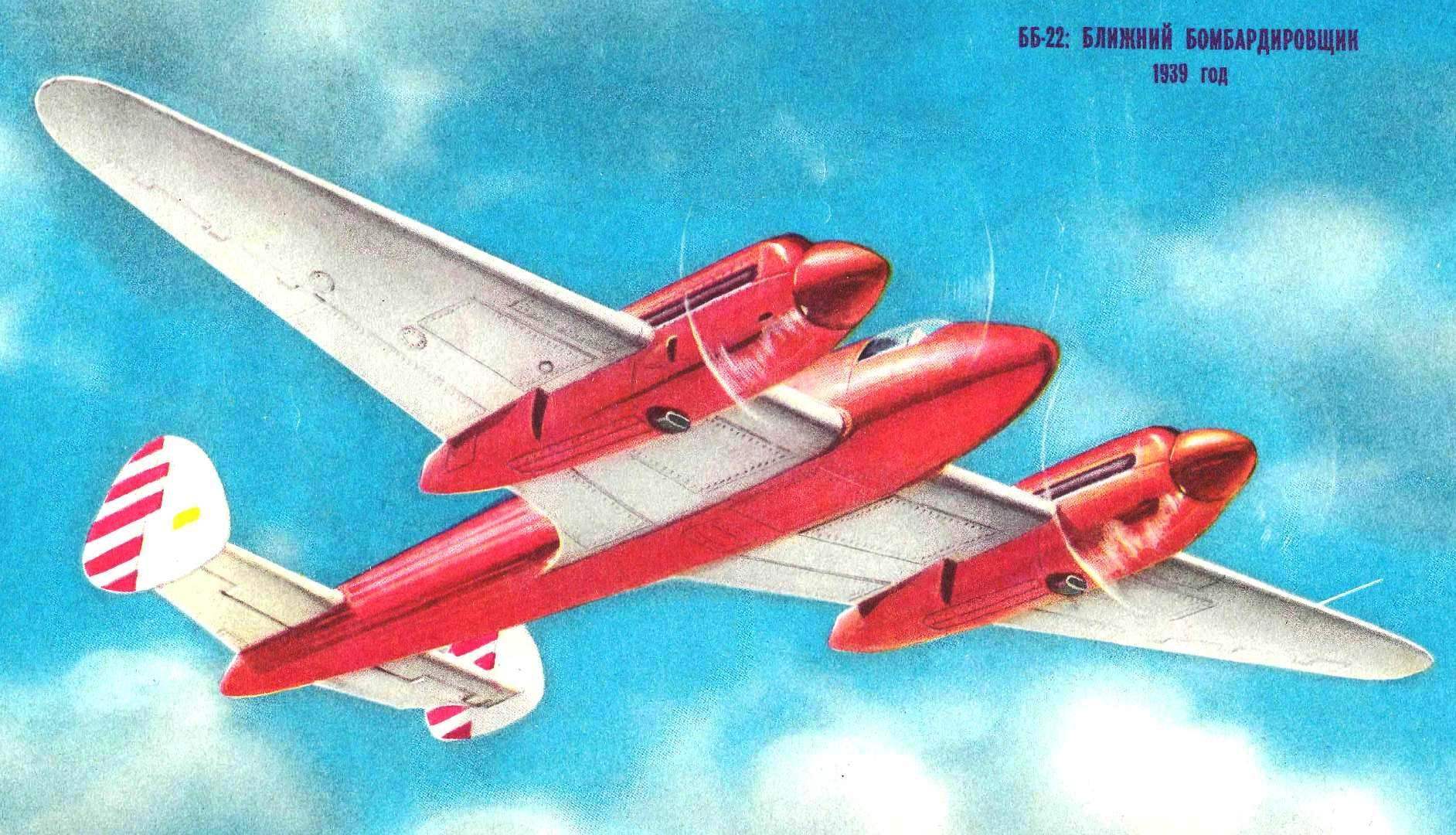 Middle bomber BB-22 has left its mark in the domestic aviakonstruktorov. About him was legendary. Indeed, this plane was far ahead at the speed of modern bombers, and some fighters.
“Its value is affected in the fiery impulse that he brought him into our aviation industry, — recalled a famous test pilot I. Shelest in his book “Flying dreams”. — The ideas contained in this aircraft A. S. Yakovlev, gave impetus to many of the leading designers of the country to the new high-speed machines.”

In the spring of 1939 on one of the airfields near Moscow test there was a beautiful twin-engine monoplane. Red-and-white colouring, sweeping shape involuntarily attracted attention. Trained eyes it was clear that the plane can show high performance.

Indeed, already in the first flight the machine reached a speed of 560 km/h higher than the best fighter at that time. Moreover, the pilots noticed that the plane there is a reserve increase of speed.
The test results surpassed all expectations, and they reported to the government. It was decided to launch the aircraft into serial production.
BB-22 was the first fighting machine Yakovlev; prior to this he was engaged in the design and construction of small structures. Among them stood a good performance training aircraft Ut-1, Ut-2 and air-7, which showed a record for its time the speed exceeds 330 km/h, etc. All machines, Yakovlev design Bureau was distinguished by low weight, simple design, high culture and purity of execution. That was best achieved in these light aircraft, the designer is the embodiment of the BB-22.
In the late 30-ies clearly a trend in aviation development: improving flying qualities can be achieved by increasing the specific load on the wing, growth, engine power and improved aerodynamics.
If you want to build a high-speed twin-engine reconnaissance plane and bomber, the designer a clear idea that the future aircraft must have a minimum size, weight and have a high aerodynamic perfection. So to determine the main parameters of the new machine (see table).
COMPARATIVE characteristics of the AIRCRAFT, BB-22 and SB

In an effort to reduce drag, the constructor is extremely “compressed” fuselage, removed all the protruding parts, the “licked” surface of the aircraft. For example, when shooting from the cab back the Navigator lowered the upper casing of the rear fuselage. This opened review rear hemisphere, but practically does not worsen the aerodynamics of the tail of the fuselage.
Wing design, made mostly of wood with thick plywood sheathing, also had a perfectly smooth surface. All these efforts allowed to reach the plane very high flight data. For comparison, the table shows the characteristics of the BB-22 and the main frontline bomber of the Soviet air force at the time SB.
What they did with fate of the aircraft, BB-22? Military pilots who conducted the tests along with the positive qualities noted a number of shortcomings. Most of the comments were fair, and their elimination certainly improved the plane. But the changes to the layout of the fuselage, the modification of the cockpit and the Navigator, setting the standard bulky rotatable turret adversely affected the flight characteristics. The machine is so lost aerodynamics, all of its advantages in speed came to naught, while in the original version BB-22 could evade any attacks from behind, using his speed advantage. So lost was the “highlight” of the whole idea.
Aircraft launched a series called the Yak-4. It was built about 600 of these machines. They took part in the fighting of the first period of the great Patriotic war.
MIDDLE BOMBER BB-22
Here is a brief description of the aircraft structure of BB-22 in the form in which it passed the state tests.
PURPOSE: high-speed twin-engine close reconnaissance and bomber.
The FUSELAGE is of mixed construction. Front — Branded, tubular steel with a sheathing of plywood. The middle part is integral with the wing and made entirely of wood. The tail portion is a truss with a shell of fabric and lowering the upper part of the fairing is made of plywood. The cockpit with equipment and lights are mounted on the front of the farm of the fuselage. The Navigator is located in the cut-out middle part.
WING dvuhlonzheronnoe scheme, wooden construction, with plywood sheathing. Equipped with boarding. shields, deviating when landing on an angle of 50°. The dural flaps. The ailerons are conventional circuits made of duralumin with fabric covering. On the wing mounted engine nacelles for the two engines M-103.
EMPENNAGE to increase the zone of fire of the back hemisphere made two-keel. Horizontal stabilizer and fin are solid wood. Elevators and turn duralumin with fabric covering.
Control elevators and ailerons is accomplished using the handle installed in the cockpit, and the system of rigid rods and pumping units. Control of the rudder cable.
CHASSIS three-wheel scheme with retractable in-flight struts and tail wheel. Cleaning and landing gear from the hydraulic system with motorized pump. From the same system operates the power cylinder to the control flaps. There is an emergency manual release system chassis. Braking pneumatic wheels.
The POWER supply SYSTEM of gasoline engines consists of six tanks, aluminum piping and valves. Two fuel tanks located in the fuselage behind the cockpit, four in the wing between the spars. Each engine has its own oil system, mounted in the nacelle. Cool oil at the bottom of the gondola is located the oil cooler.
In the rear part of the nacelle includes a radiator cooling water surrounding the cylinders of the engine. Fence cooling air is through the side gaps and tunnels, and discharge through adjustable louvers in the tail of the gondola. 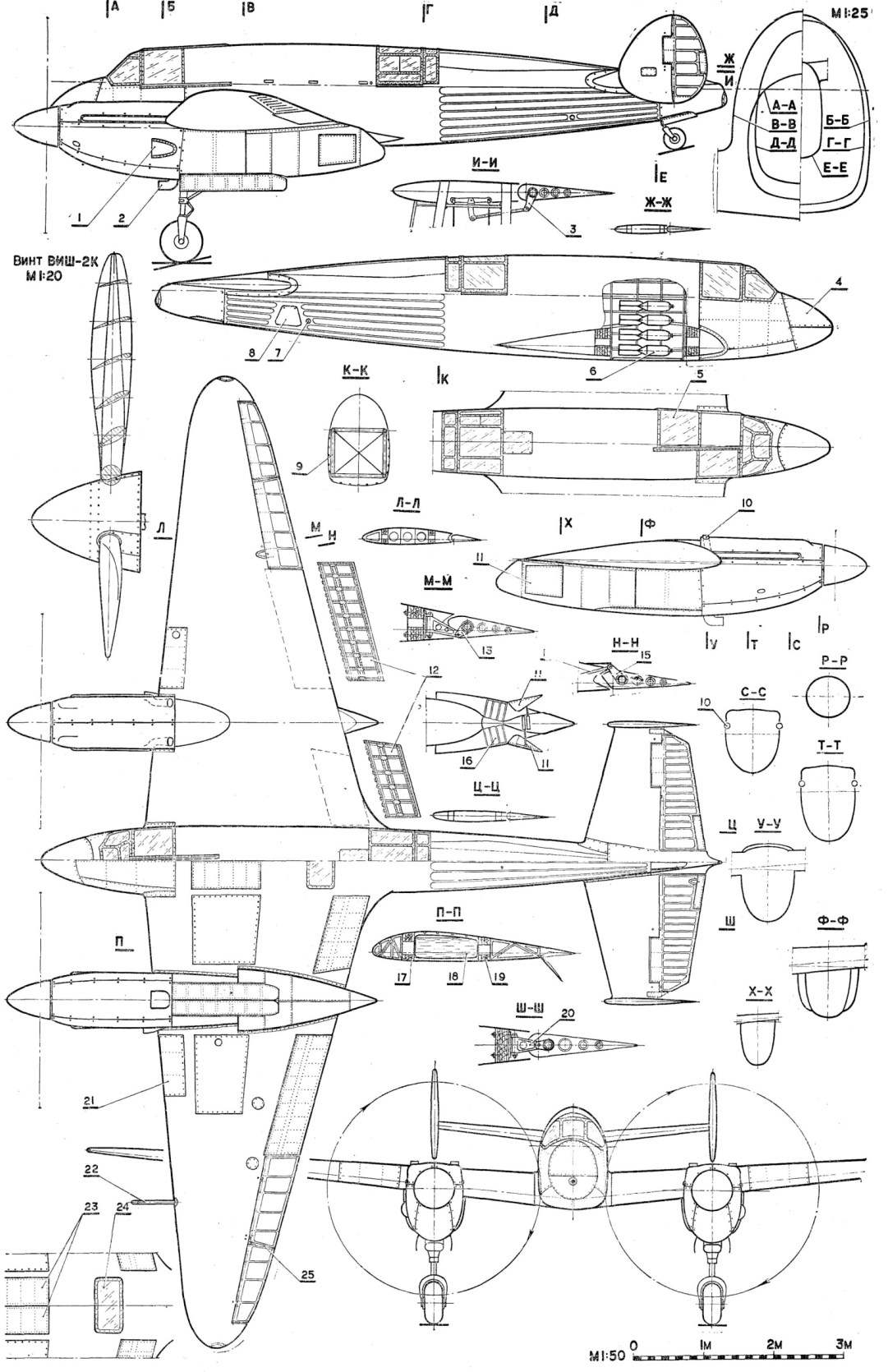 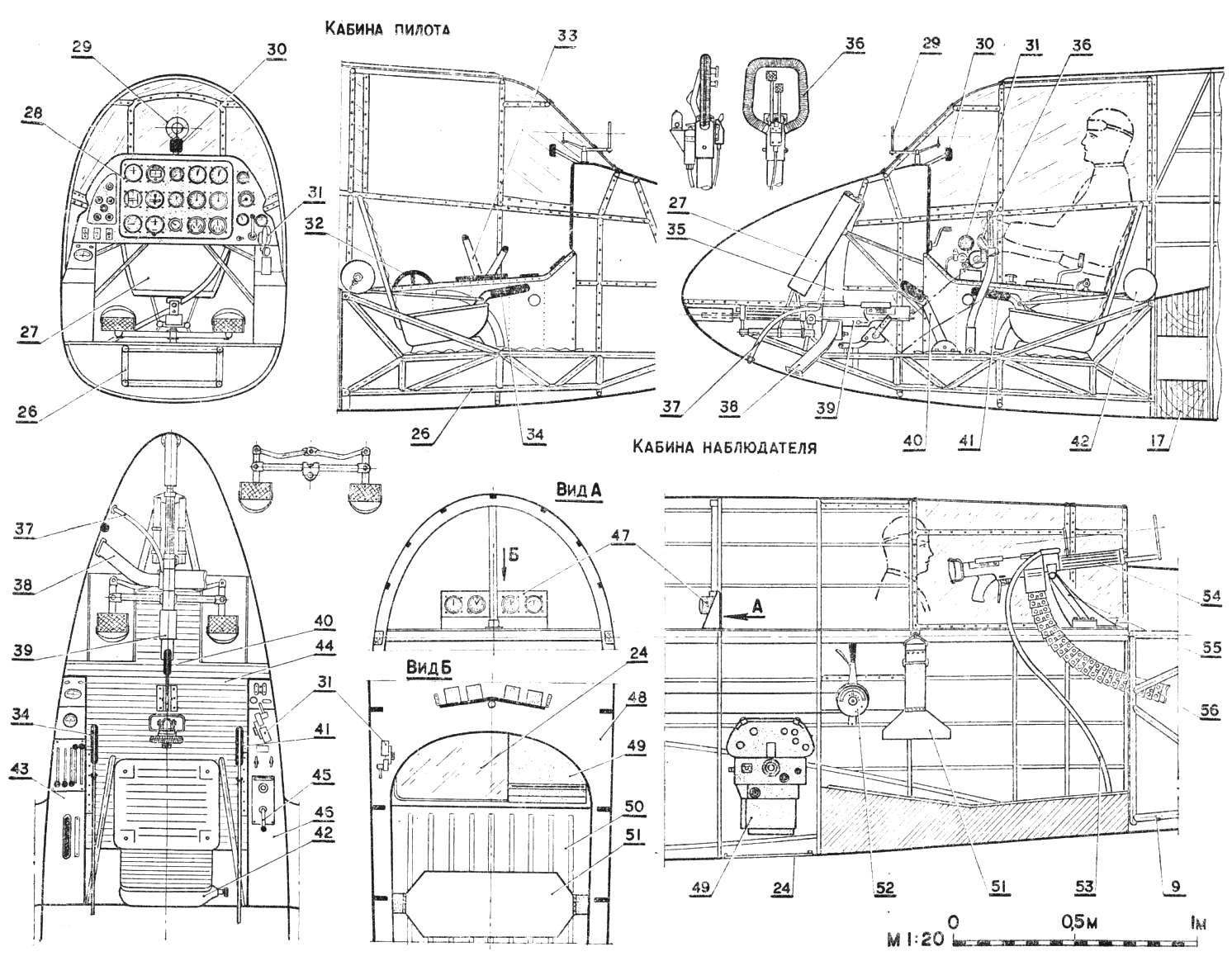 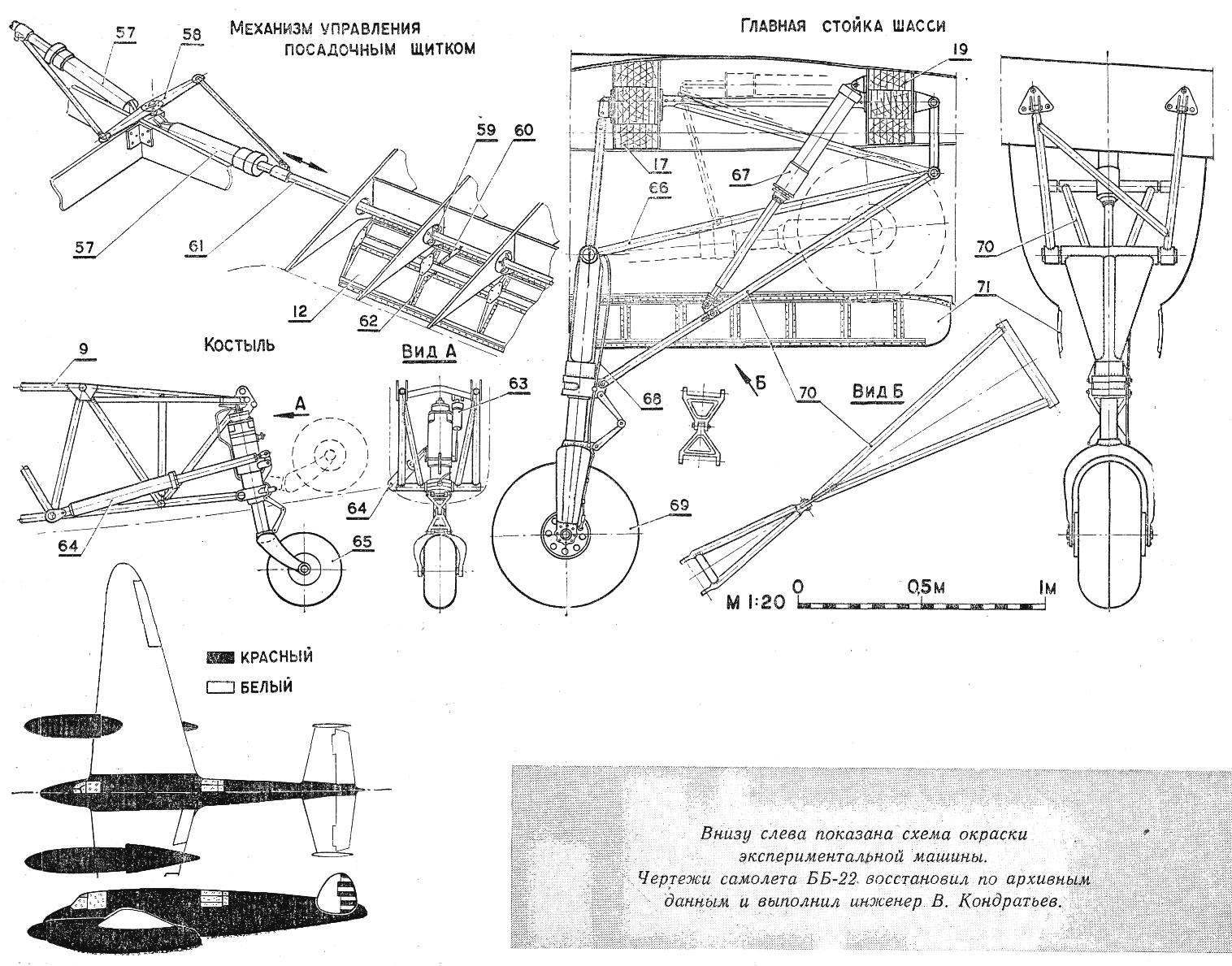