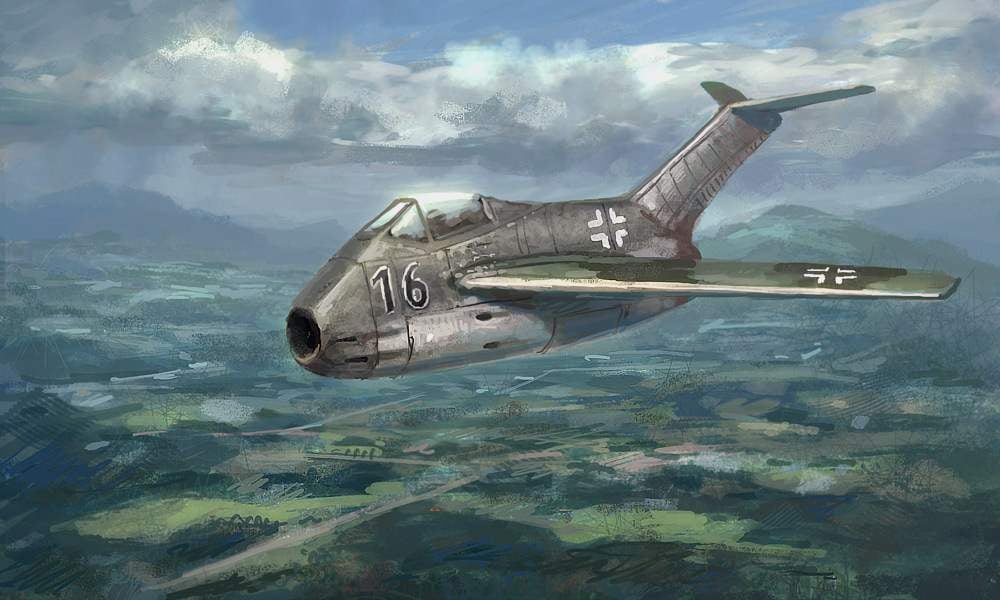 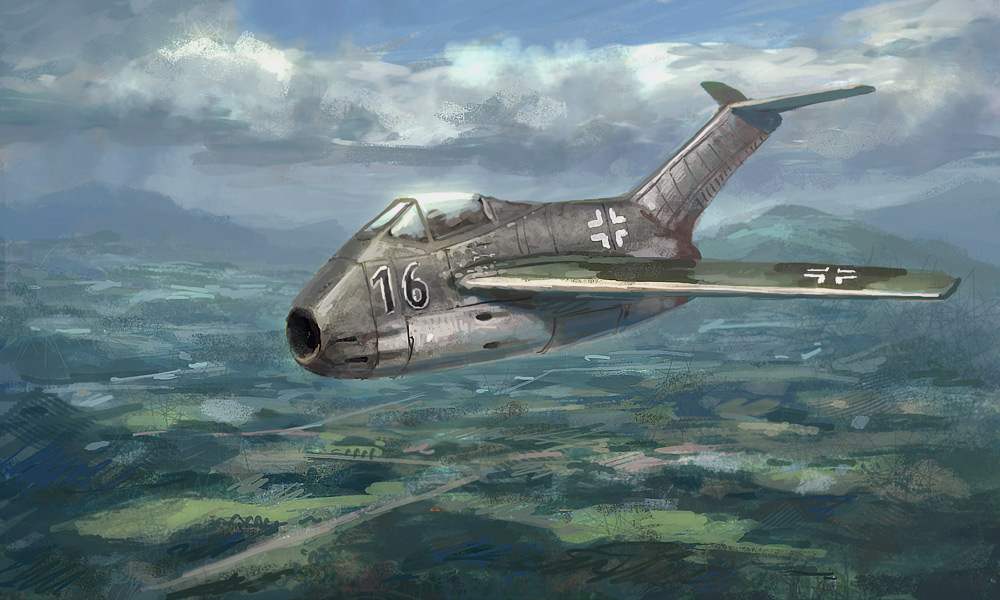 Recall. During the Second world war working on jet engines were in Germany on a broad front. They are ahead in this area all of the country and was able to convey in the production of two types of TRD – Ju-YuMO 004 and BMW 003. Equipped with their first jet aircraft – the Me 262, he 162 and ar 234 was the undoubted success of the German scientists and engineers. These aircraft are widely known, but the design idea was not on, and the command of the Luftwaffe in July 1944, announced a competition for the creation of the fighter that can replace the Me 262 and had the best flight and operational data.

Requirements for a new fighter was set out in the Technical requirements of the RLM 226/II, dated 15 July 1944 They stipulated that the new fighter will be single-engine and have a new turbojet Heinkel HeS 001 Hirt, with an estimated thrust of 12.75 kN (1300 kgs). The work was conducted already in 1939, and the Germans hoped that they will be able to arrange its production. These hopes were not justified – until the end of the war was built only a few prototypes. The rejection of the twin-engined fighter in favor of the concept of”One engine – one plane” at the time, had serious arguments. The fact that the production of engines was small, and their lifetime is much less than that of the piston, not allowing them to build a lot of twin-engine fighters. On the other hand, to create a single-engine plane was not very simple – not enough thrust from the jet engines, requiring maximum ease of the glider.

Other paragraphs of the requirements was that the maximum speed should be 1000 km/h at 7000 m, fuel capacity – 1000 liters (30 min flight), and a service ceiling of 14 000 m. equipment expected from the 4 cannons MK 108 caliber 30 mm. the Pilot must be in a pressurized cabin with front and back protection from bullets caliber 12.7 mm. the Latter requirement stemmed from the experience of the struggle against American bombers b-17, the arrow which side had the guns. In General, the fight against heavy bombers of the allies was the main task of the new fighter. Not filmed the task of maneuvering air combat, so it was decided in the case of a single-engine plane. With regard to technological requirements, it was recommended strongly to reduce the use of scarce materials, and instead make greater use of steel and wood.
The competition in that hopeless situation in which Germany was at that time causes admiration. No less surprising is the fact that the competition was attended by all the major aviation firms. This is due to two factors: firstly, the German science and technology had great potential, and secondly – a business led initiative development of jet aircraft since the early 1940-ies. The winner of the contest became the company Focke-Wulf. Her project, which received the official designation TA 183 (named a rising design stars of the company – Kurt Tank) were recommended in production, but remained only on paper and was never built. 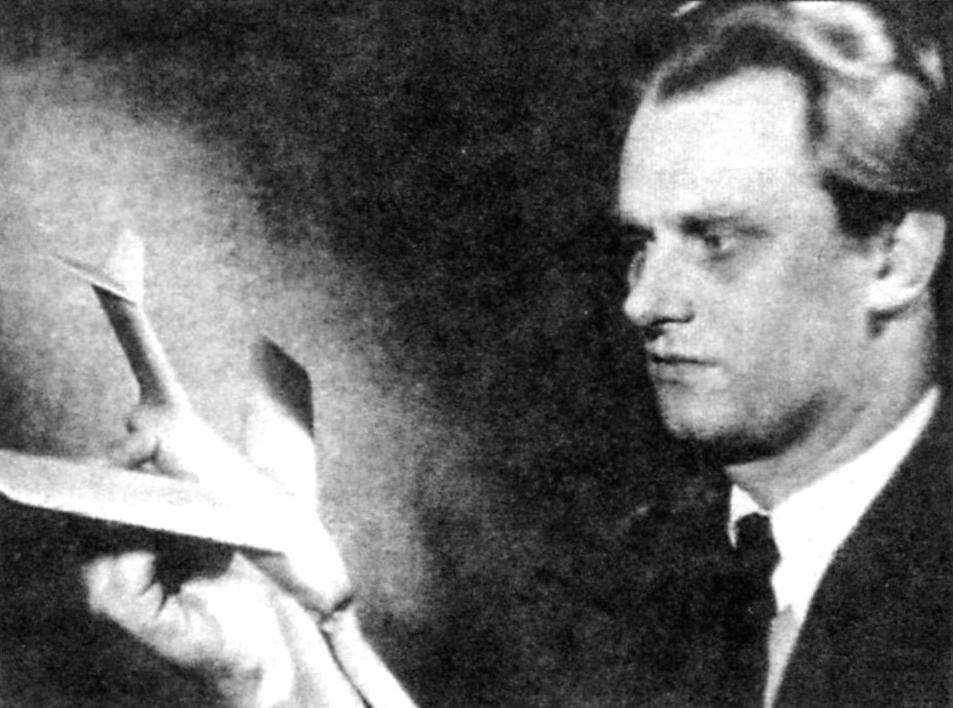 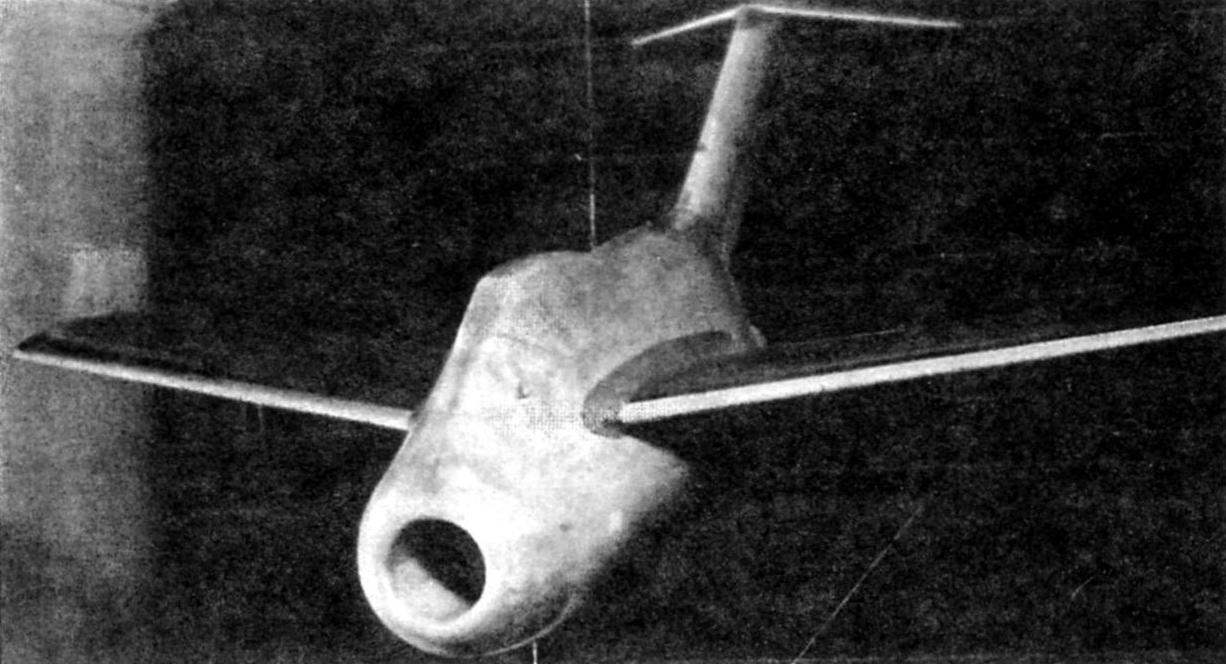 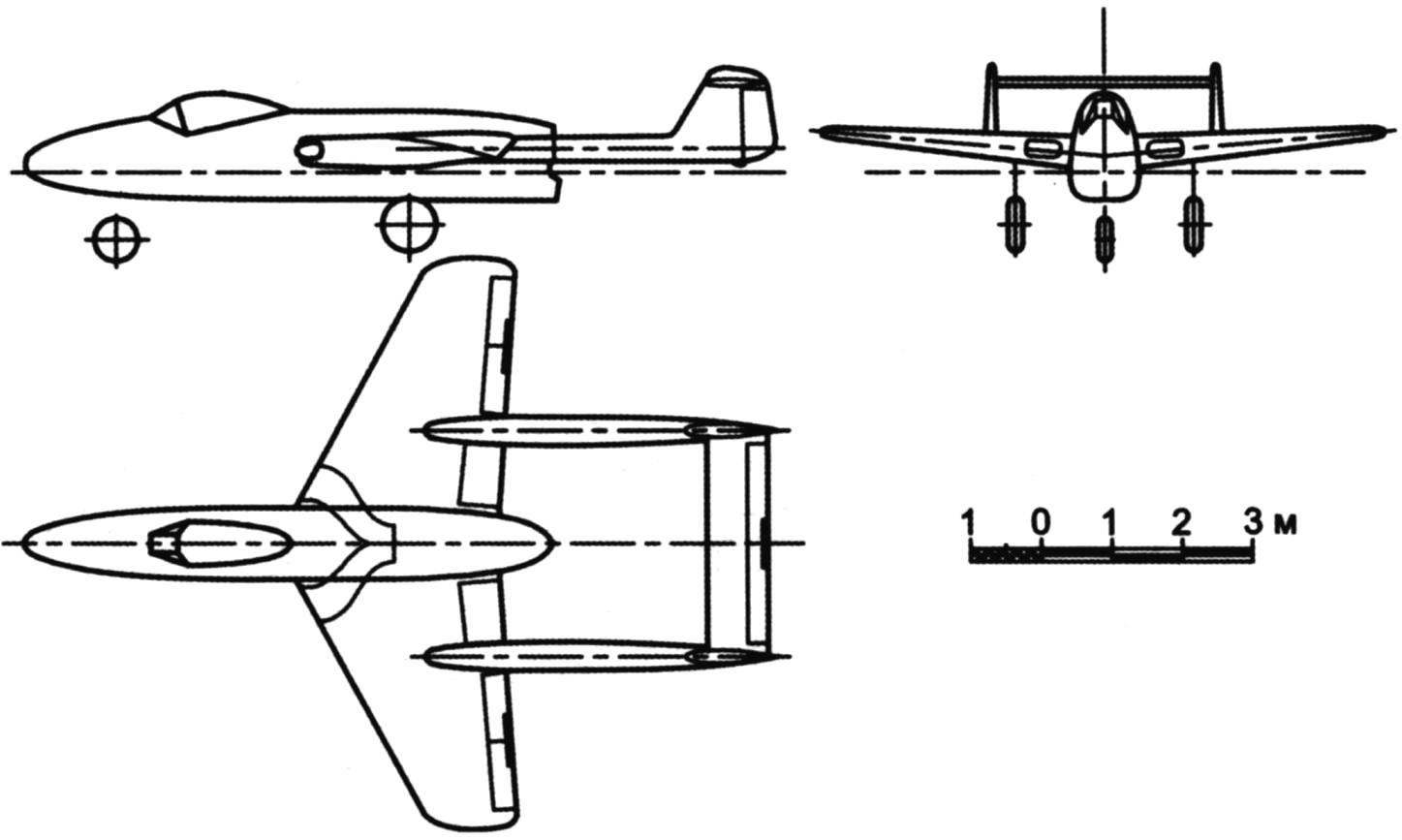 TL-Jager -prototype Flitzer. The project fighter with mixed propulsion system
In fact, the firm Focke-Wulf began work on jet aircraft later their competitors. In March 1943 there was a project involving the placement of the nose is heavily modified fuselage of the Fw 190 with the TRD YuMO 004В. In this case, a plane being transferred to the scheme, reminiscent of the post-war the Yak-15. The project was rejected.
Then in may 1943, Kurt Tank proposed another variant where the engine was located under the newly designed fuselage. It also rejected – because of the danger to the pilot landing on the belly. Taking into account criticism, C. Tank joined both the project and has offered a fighter with the revolutionary for that time scheme.
The combined power-plant, consisting of turbojet and rocket engines, was located on the end of a short fuselage. The intakes were removed to the front edge of the wing. The air ducts turned out badly curved, but short. The combustion chamber of the rocket engine is the turbojet engine nozzle. The tail was double, and consisted of a straight stabilizer and two fins on the ends of the beams. In front of the short fuselage housed the armament, cockpit and niche nose landing gear. Main legs retracted into the wing. The wing had a moderate sweep of 27° and a small transverse V. In the process of further elaborations from rockets refused and left with only one turbojet. The result is a project known as Flitzer. He was brought to the stage of wooden mock-up, but build it did not. The plane had a wingspan of 8 m, a length of 10.55 m. empty Weight – 3200 kg, and take – 4750 kg. Armament consisted of two cannons MK 108 caliber 30 mm and two MS 151/20 caliber of 20 mm. Maximum speed was assumed to 875 km/h at ground level, the ceiling of 13,000 m and range – 660 km. the Concept of this machine was repeated by the British in the planes De Hevilend a Vampire, and then the sea vixen.
Others by the development of jet aircraft chosen by the designers of the Focke-Wulf was the application of the frontal air intake, fuselage mid-length with a short tail boom and T-tail. As expected, simultaneous replacement of the jet Me 262 and the Me 163 rocket, the first projects had a combined power plant. The rocket engine allows you to quickly gain altitude and speed, and propulsion turbojet engines to continue the flight and conduct maneuvering air combat. In the second half of 1944 the Luftwaffe leadership decided that the fighter should have one engine, which resulted in a recycling project, which was submitted to the contest.
The Luftwaffe and air Ministry felt that it best meets their requirements, and announced the project Focke-Wulf a winner. To commemorate the contributions of Kurt Tank, the design of this machine was given the designation TA 183. And fighter Messerschmitt R. 1101 official designation (IU 330) has not received, since the machine never was listed and was built semi-underground. 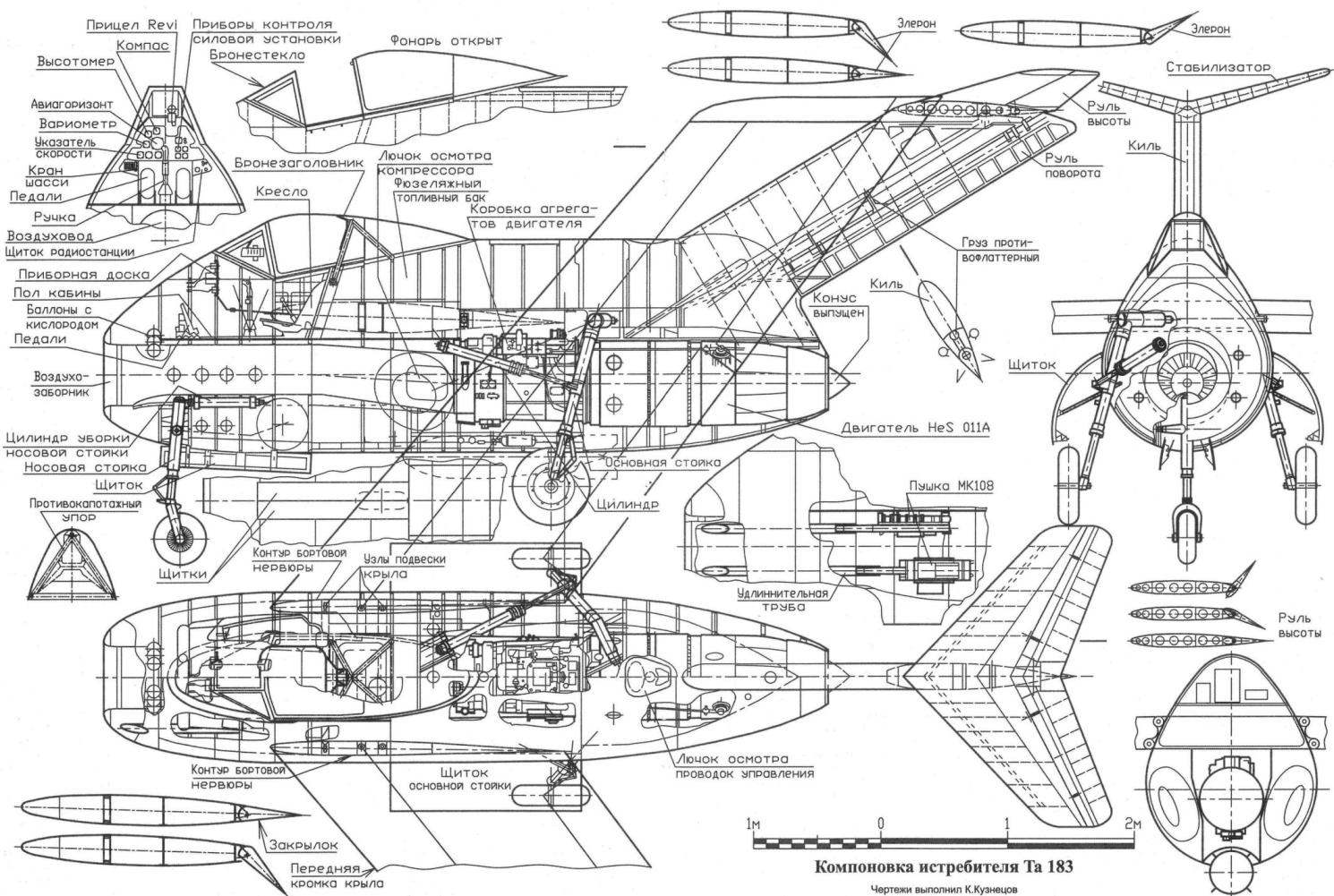