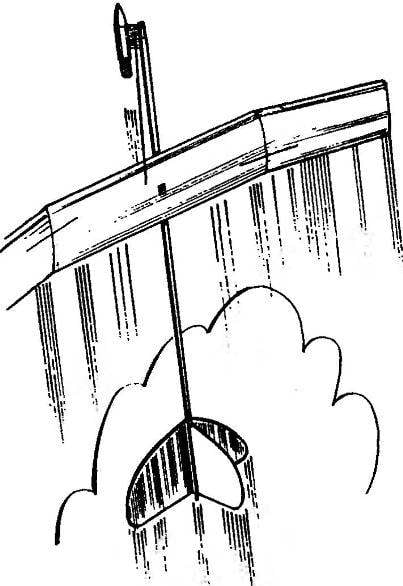 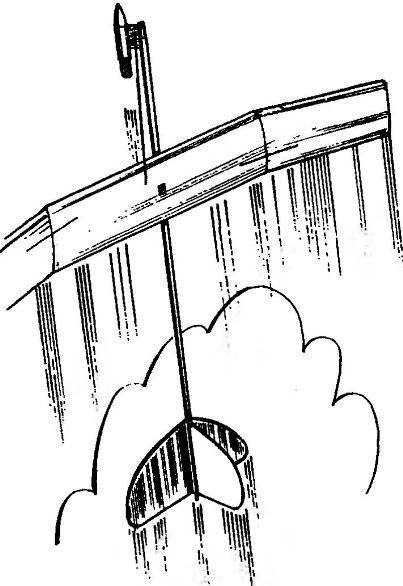 In the circles of rocketmodeler name V. Menshikov known. Honored master of sports, two-time world champion, repeated champion of the USSR and Russia — this is not a complete list of achievements of athletes from the Siberian town of Urai. A memorial was V. Menshikov and the last sports year. He became the champion of Russia and prize-winner of the world championship in the class of models 84В. I believe readers will be interested to meet his sporting “weapon” — rocket glider.
Rocket V. Menshikova performed by well-known scheme with the folding of the rotary wing. Balsa wing consists of a center section with a length of 322 and a width of 65 mm and two consoles. The details of the wing are cut from plates of 3.5 mm thick, profiled and covered with two layers of nitrocellulose lacquer. Swivel consoles with the center section — nylon strips, 10 mm width, glued on the lower wing surface. On the top, at a distance of 25 mm from the axis of the swivel, reinforced hooks for rubber bands return consoles, b the place of touch of rubber bands reinforced with pieces of celluloid. On the left half of the center section, closer to the middle, glued the hook for the elastic twist of the wing in the planning.
From the bottom to the middle of the center section glued to the balsa plate size 65×7 mm with variable thickness (maximum — 3 mm — front). The album serves as a pylon of the wing and allows you to change the installation angle to adjust the space Shuttle. Here, in the middle of the center section, drilled a hole with a diameter 2 mm under the fastening screw of the wing, reinforced the top with celluloid. The left pylon is glued wire end stop of rotation of the wing in the planning.
The fuselage is a conical beam, is molded from plastic. The mandrel of variable cross section from 7.5 to 4 mm, pre-lubricated dividing mastic, wound one layer of fiberglass with a thickness of 0.05 mm, then two layers of carbon fabric with a thickness of 0.12 mm. then fit two layers of fiberglass and for a tight fit of the layers to each other and wound tape. When the resin has dried, the workpiece was processed with sandpaper with the fine-tuning of the mass of the conical beams up to 1.5—to 1.7 G. 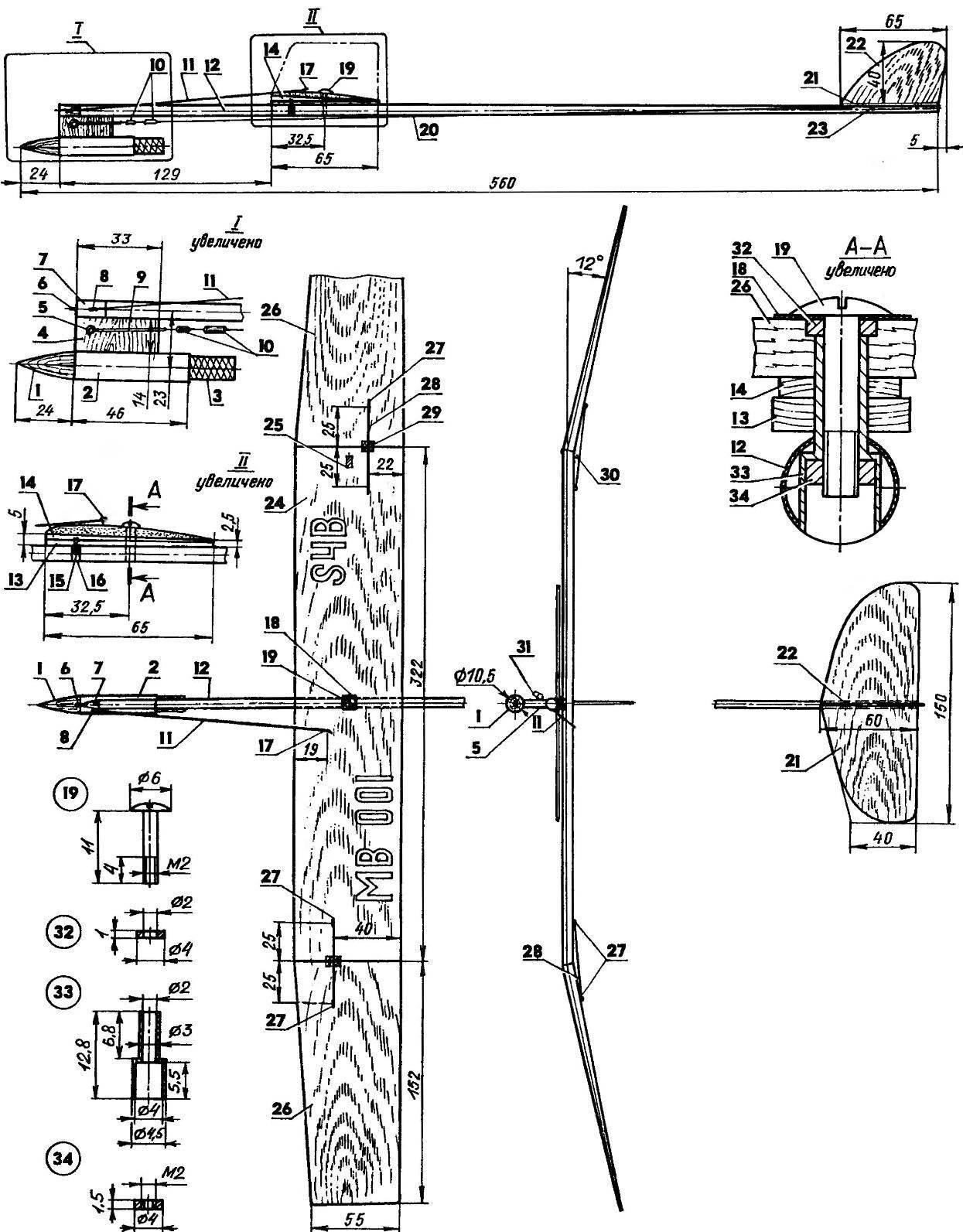 Model rocket modeling class S4B:
1 —fairing; 2—container mrad; 3 — MRD; 4 — pole motor; 5 — a piston (reinforcing insert); 6 — ring fixation threads for fixing the wing at the start; 7 — cone of the fuselage; 8 — a ring of elastic return of the wing; 9 — elastic determinator; 10 — weights determi-lizator; 11 — the elastic return of the wing; 12 — fuselage; of 13.23—support bracket; 14 — pylon wing; 15 — turn limiter of the wing when planning; 16 — base plate; 17 — hook rubber bands return; 18,25,29 — reinforcing plates (celluloid); 19 — a bolt of fastening of the wing; 20 — thrust of determinator; 21 control; 22 Kil; 24 — wing; 26 console wing (“ear”); 27 hooks rubber bands return consoles; 28 — gum return consoles; 30 — hook fixation of the wing during takeoff; 31 — wick; 32 — washer; 33 —the case of the attachment of the wing; 34 — M2 nut
In the tail part of the fuselage is glued into the tube and it is sealed one end of a rope of determinator (to another, the front decorated in the form of a loop, soldered desvinculan weight). On top of the shank of the beam is fixed a thin balsa plank, which are glued to the stabilizer and fin. Both parts of the tail cut along the contour of the balsa veneer 1.5 mm thick slightly profiled and lacquered.
In the forward part of the beam is inserted fairing from basswood and glued two rings of wire with a diameter of 0.5 mm: one (front) to fix the mounting of the wing at the start, the other (left) is for the elastic return of the wing in the planning. Here, in the bow beams, glued on the BOTTOM plate sizes 33x14x4 mm – Pilon container mrad. It fixed the piston, through which is passed the thread of determinator to fix the wick. Container MRD — fiberglass tube molded on a mandrel with a diameter of 10.2 mm. Front of the tube glued to the fairing of lime. At the junction of the container and fairing are made five holes to release gases when triggered, expelling charge mrad. Through them threaded the thread of the fixation of the wing during takeoff.
At the distance of 129 mm from the front edge of the beam is glued from the top support bar of a length 65 and a width of 8 mm, which “planted” the pylon of the wing. In the middle of it is made a through hole with a diameter of 3 mm under the hull attachment point of the wing. All the details of the fixing unit is made of duralumin with a high degree of accuracy and purity. Soprikasalis the surface of the strap and pylon wing machined graphite material, the pencil core.
Model rocket plane to prepare the launch in that order. Console folded down to the center section and rotate it 90° counterclockwise (thus it lies along the fuselage). Cut threads threaded through the hook fixation of the wing, the fairing ring in the beam and openings in the container MRD and tie. The loop of determinator attach the cut rubber, tying it with a loop. In her thread insert, threaded her through the piston pole MRD and tightly tie the wick to the side of the piston to the right. In order to avoid burnout the lateral surface of the pylon paste over with a piece of foil from a capacitor or cigarette foil.
The mass of the rocket without MRD — 23
Starts model rocket from a launcher of the type “Piston”. After burn-MRD-triggered lifting charge. While burn through the thread of the fixing wing and it is under the influence of bands rotated across the beams of the fuselage. At the same time folded shell is that wing is ready to gliding. After the time of planning the wick burns through the threads of fixation and it releases the lock of determinator, the free end of which is deflected downwards with the weights, disturbing the alignment of the model. She goes into a pitch up and safely landed.