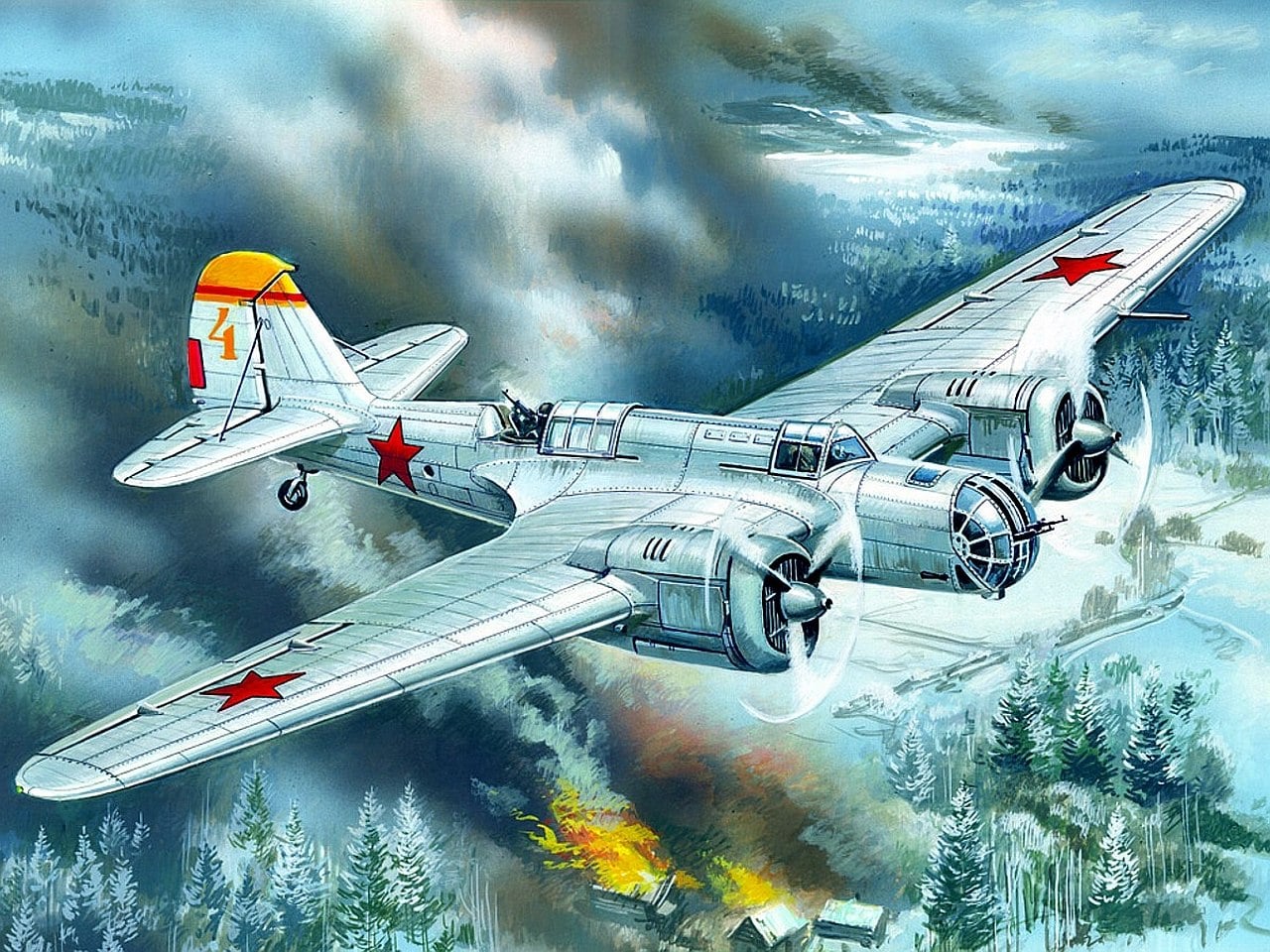 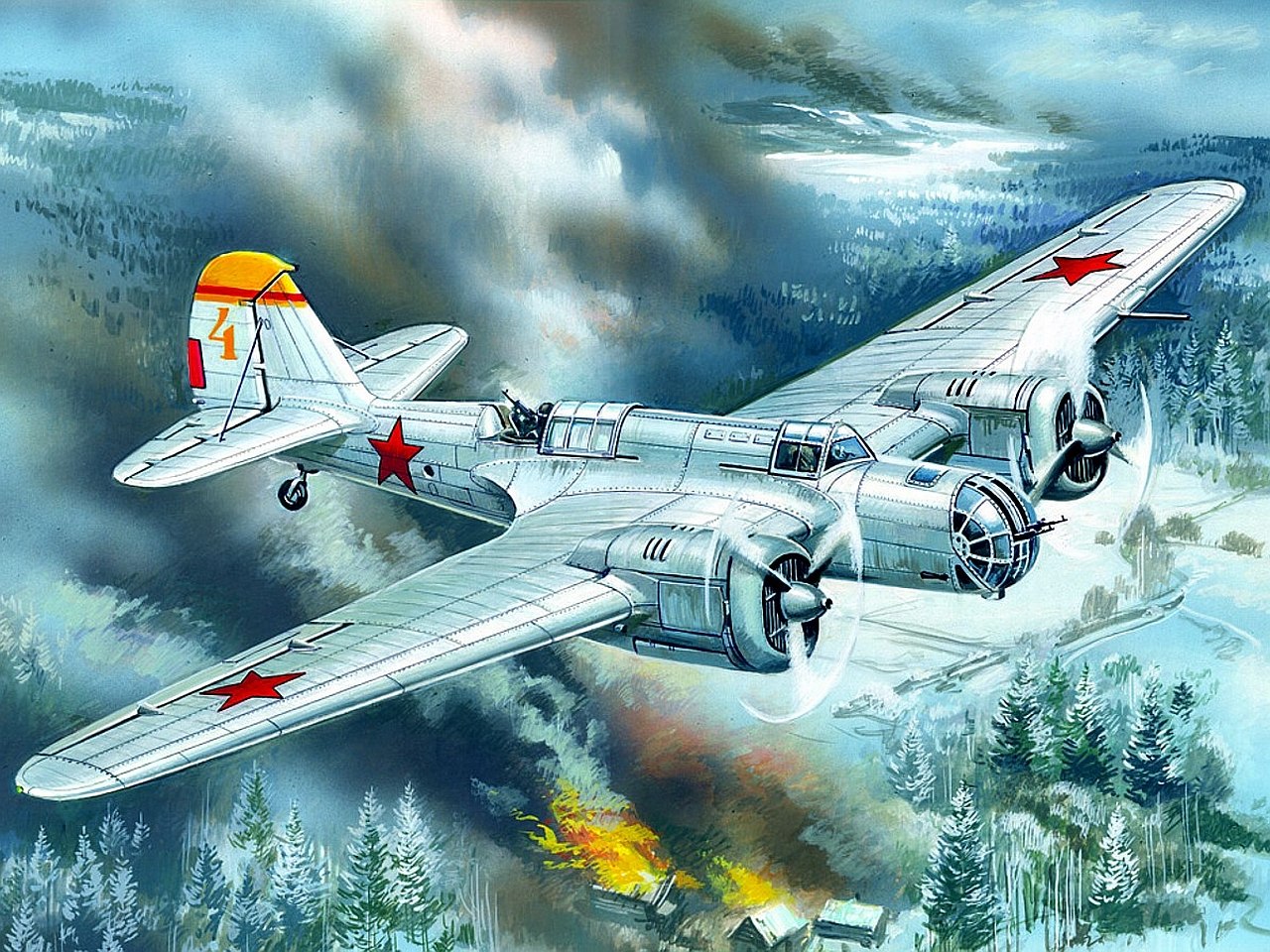 The plane SB (ANT-40) — high-speed bomber, made of a metal cantilever monoplane with two engines M-100A located on the wing.

The fuselage is relatively narrow, oval-shaped cross section, narrowed at the top, cigar-shaped, like the monocoque; for convenience during transportation and the repair is partitioned into a number of separate aggregates: f-1 — head part of the fuselage is aerodynamically shaped forms, was a Navigator; f-2 — the second compartment of the fuselage is a cabin with a lantern to wrap the head of the pilot; C — center section, represents the middle part of the fuselage and wing and is a power basis of the aircraft as it will link the wing and fuselage and, in addition, carries both propeller installation aircraft, the petrol and oil tank, chassis, middle part of the landing flaps and cargo compartment. Power set centroplane part of the wing consists of two spars connected by ribs and stringers; f-3 — the tail section of the fuselage carries the tail unit of the aircraft and spike installation. In this part of the fuselage contained the radio operator’s cabin; — detachable, cantilever part of the wing. They hung the ailerons and the landing flaps. Inside the console parts of the wing placed fuel tanks.
The wing consists of a center section and detachable parts. Last met and the center section, dvuhkonusnyj, truss spars have upper and lower belt, made of telescopically recruited hromansilevyh pipes, connected by bracings, struts and plates. The ends of the outer wing truss spar goes into the beam. A smooth-running wing skin is reinforced by the often established rare ribs and stringers.
Tail — raskalennoi, consists of a keel, R-4, rudder R-3 streamer, stabilizer R-1 and elevators R-2 with their trimmers. Kiel, R-4 with the fuselage of the f-3 are structurally one. The remaining units of the tail — plug.
To improve the aerodynamics of the aircraft at the junction of the fuselage with the wing, stabilizer and fuselage on the leading edge of the wing in places hood is installed fairings-fairings.
Landing gear with oil-air cushioning, the retractable type with provalone brake wheels 900×300 mm. the Mechanism of the landing gear of the hydraulic type with electric alarm. In case of damage of the hydraulic system in flight has an emergency cable descent driven by a hand winch mounted in the cockpit the radio operator (this duplication is vital to the aircraft systems was made in the USSR for the first time). The wheels retract into the wing back, but part of it completely. So the chassis has a cowl-fairing of the sliding type, which at the time the landing gear is formed by a mechanism associated with the moving elements of the mechanism, and closes all the speakers from the wing parts. To reduce run of aircraft landing wheels are equipped with drum brakes with pneumatic control.
In order to reduce landing speeds, and increase the steepness of the trajectory planning on the aircraft is provided with landing flaps type “Northrop-shrink”. Flaps consists of four subunits: two mounted on the center section and two cantilever part of the wing. 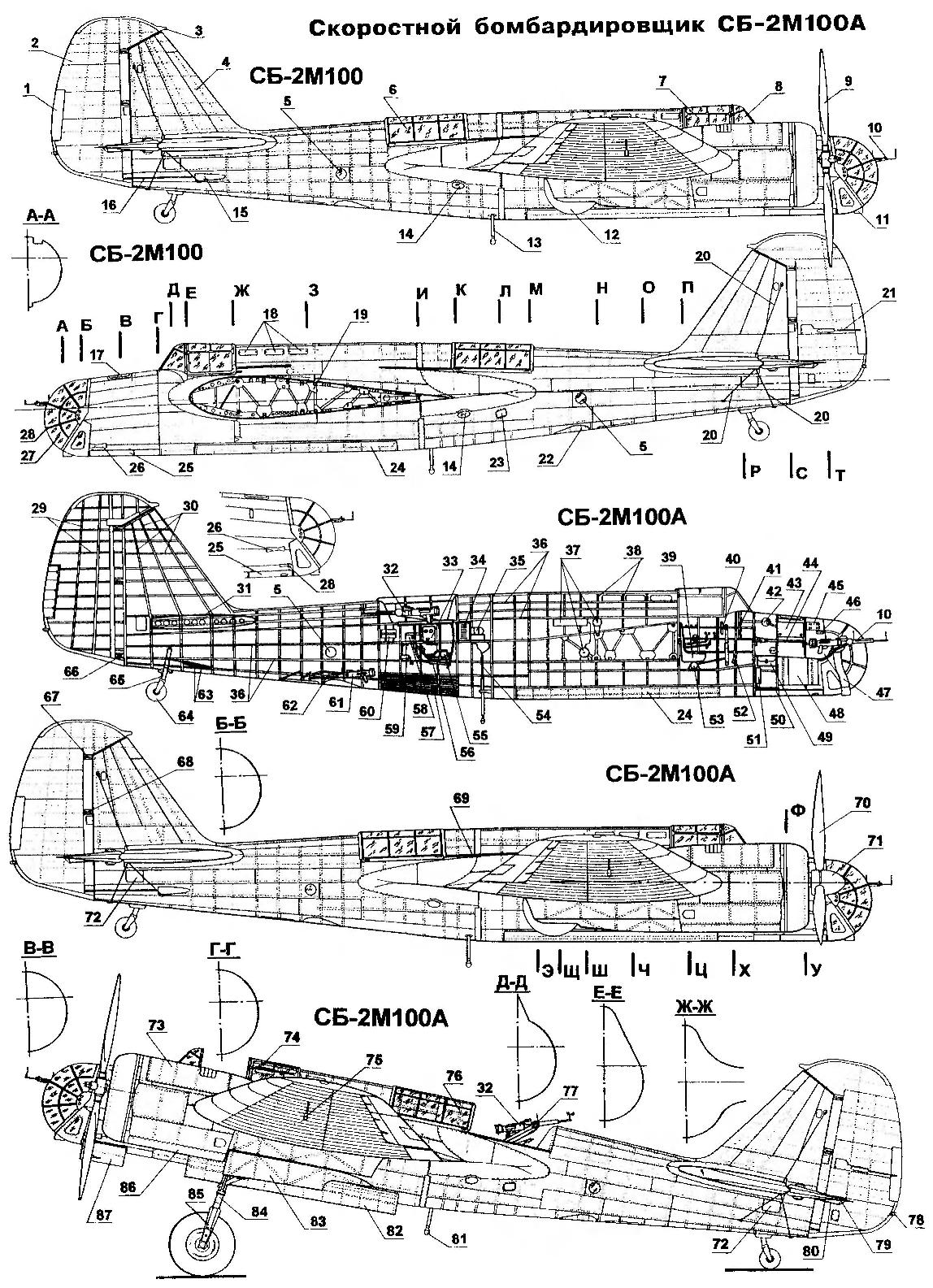 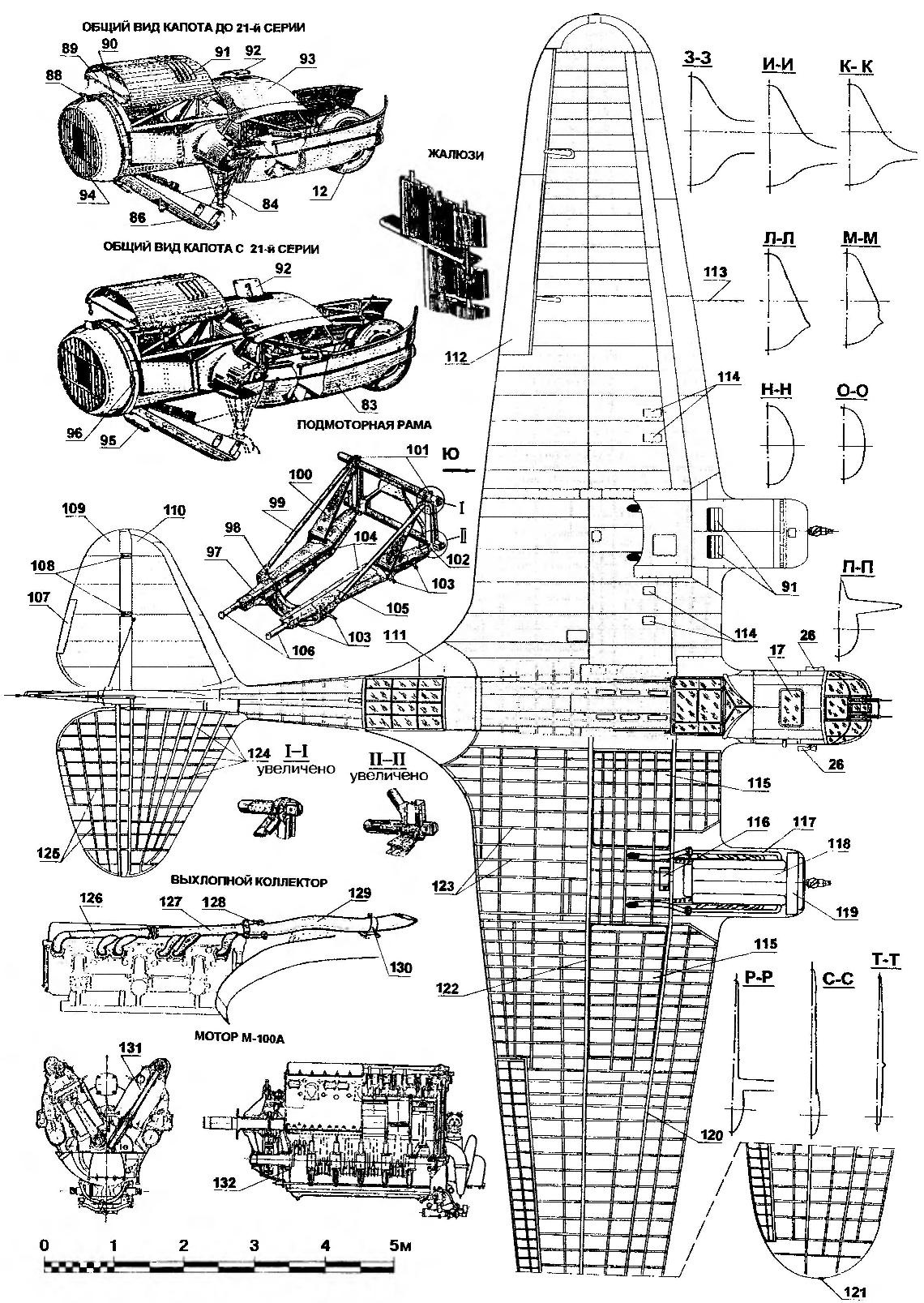 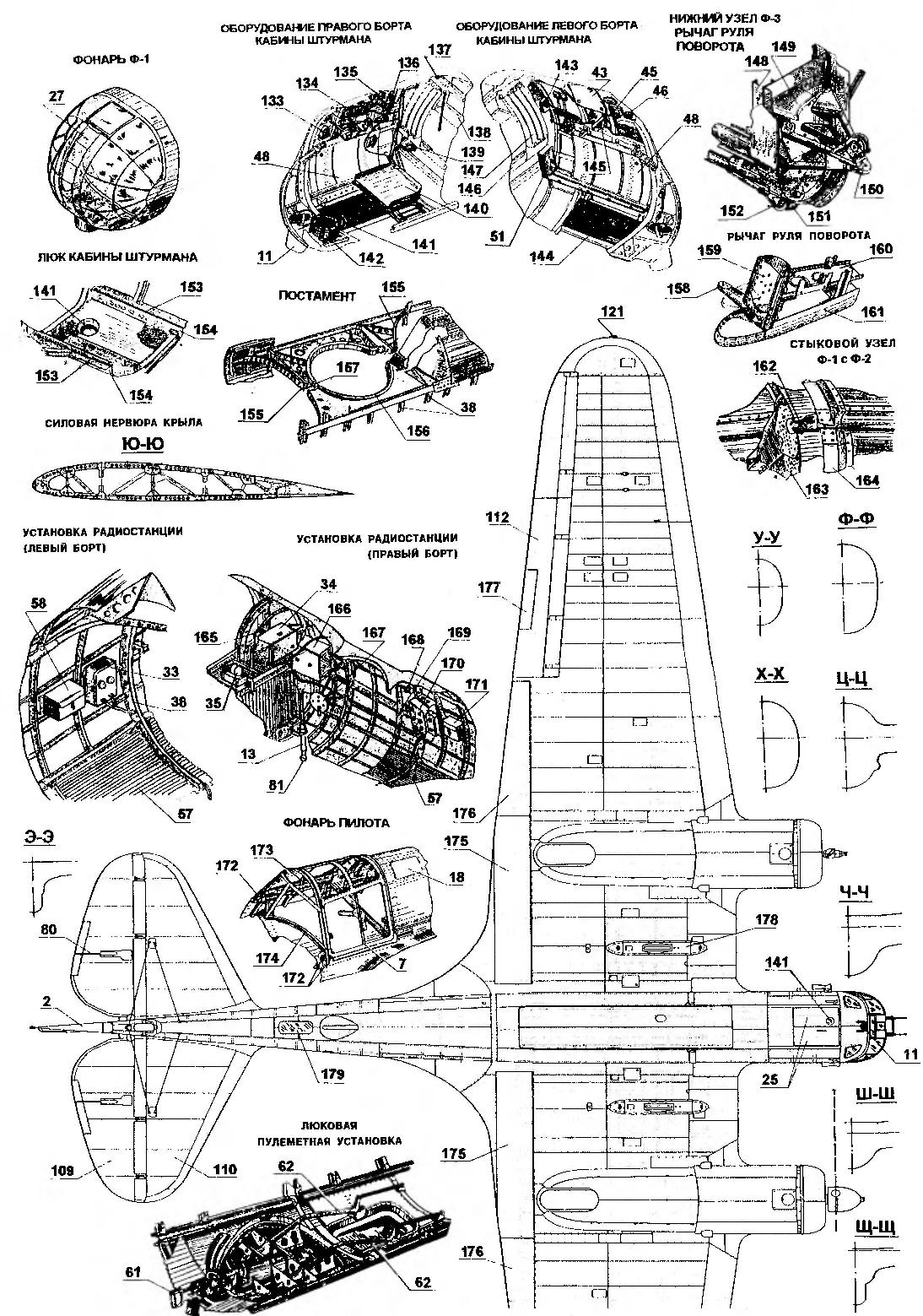 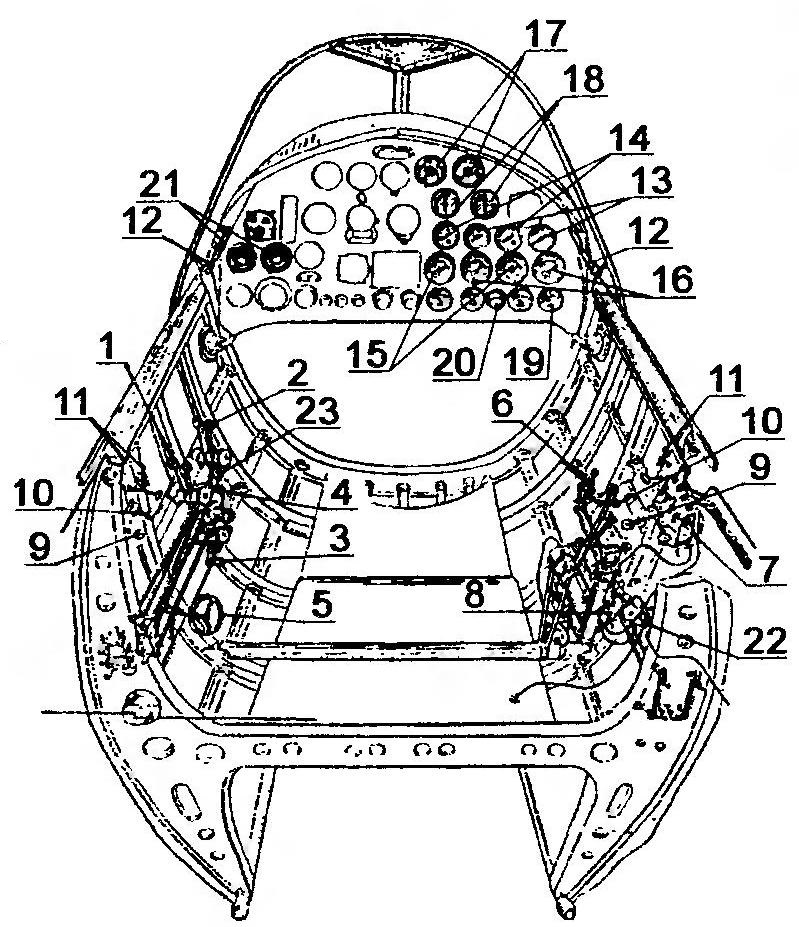 Control of the engines from the cockpit:
1 — the sector normal gas; 2 — gas sector altitude; 3 — sector fire specks; 4 — sector cable control by changing the pitch of the screws (on aircraft with VISH-2); 5 — control wheel covers cowl; 6 — a gear sector shutters; 7 — control panel start engine; 8 — manual-starter AKR-30; 9 — controlled oil injector; 10 — crane control emergency discharge of water; 11 — control manifold taps tanks; 12—valve; 13 — compensated pressure of gasoline; 14 — pressure-oil; 15 — electrothermometry oil; 16 — electrothermometry water; 17 — elektrotahometrs; 18 — manovacuummeter; 19— pointer benzinaio; 20 — the switch of benzenamine; 21 switches working magneto; 22 — drain the Park; 23 — scale sector altitude corrector
On the dashboard the pilot set the navigation instruments and apparatus motor equipment, electrical equipment and chassis.
The electrical installation of the aircraft is powered by a generator DSF-1000-powered drive motor and connected in parallel with the battery. In flight, when the engine speed is reduced to 1650 rpm and below, the supply of electricity is automatically switched to battery.
Communication with ground stations and between aircraft of the detachment is made using a special radio installation. Radio 13СК-3 (24-series bombers — ALS) located in the cab radio operator-gunner.
Crew communication between them is carried out using a three-color alarm, alarm and intercom SPU-3 and pneumopathy.
The basic flight characteristics of the prototypes and production aircraft SB 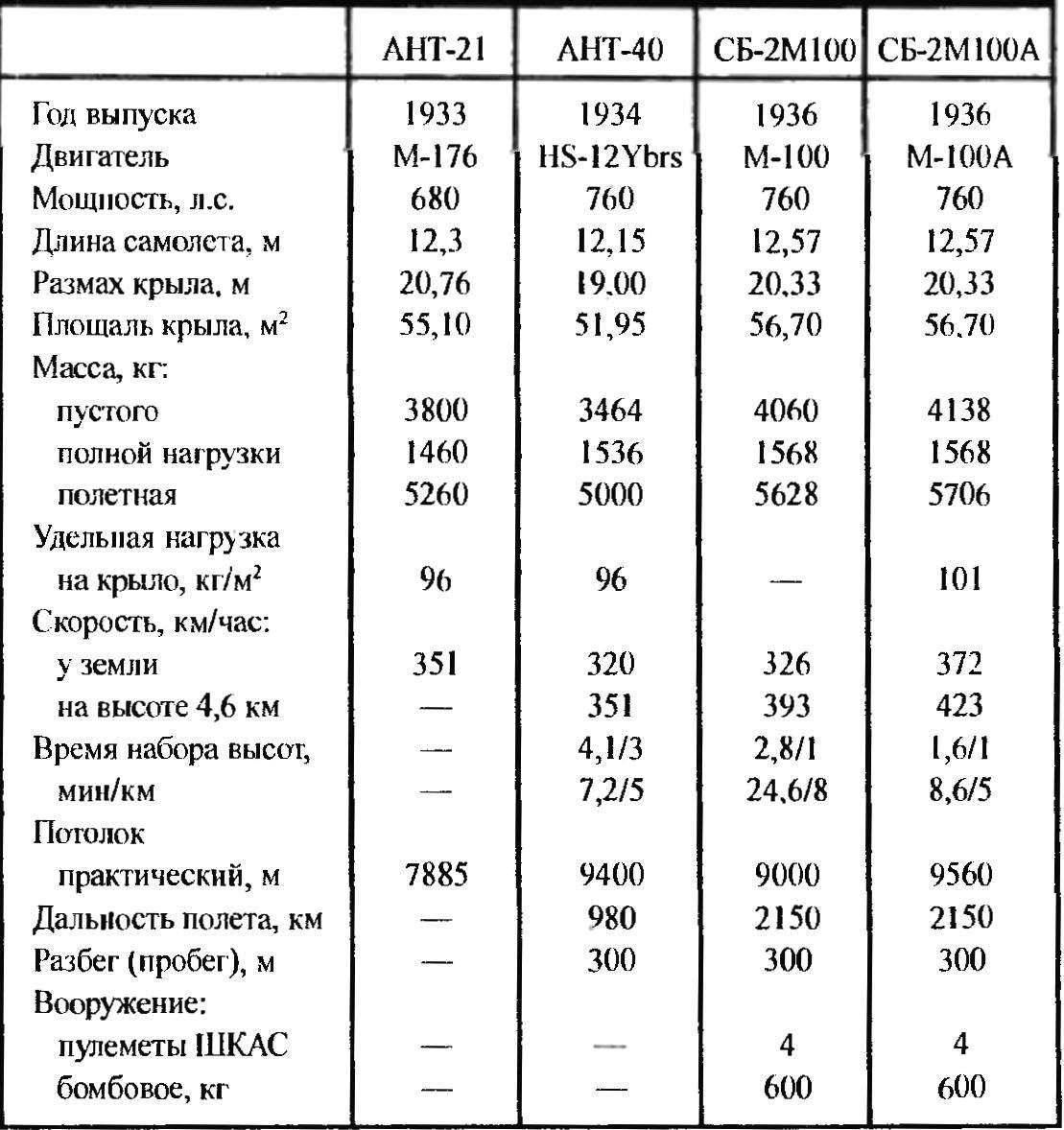 In case of a night landing, the plane secured parachute rockets, underwing torches and manual aircraft spotlight (RSP-150).
The armament of the aircraft consists of bombing and shooting. Bombs are in the bomb Bay, which occupies the Central part of the fuselage. Signalone the wing spars which pass through the bomb Bay, determined the scheme of placing bomb racks and suspension of bombs. Large-caliber bombs weighing 500 kg are suspended in the bomb Bay only horizontally under the wing spar, and the suspension of bombs of smaller weight — 250 kg and less, in combination: vertically in front of the bomb Bay between the wing spars and horizontally in the rear of the bomb Bay behind the rear spar of the wing. Management is dropping bombs from the cockpit of the Navigator using an electric or mechanical mechanism. In the cockpit there is a duplicate emergency derailer. The entire bomb load weighing 500-600 kg is placed near the center of gravity of the aircraft and his volley doesn’t have a significant impact on characteristics of stability and controllability of the aircraft.
Can be used this combination of bombs: 2×250 kg 2×250 + 4×25 kg, 6×100 kg, 4×100 + 2×25 kg, 6×70 + 4×10 kg 1×500 kg. 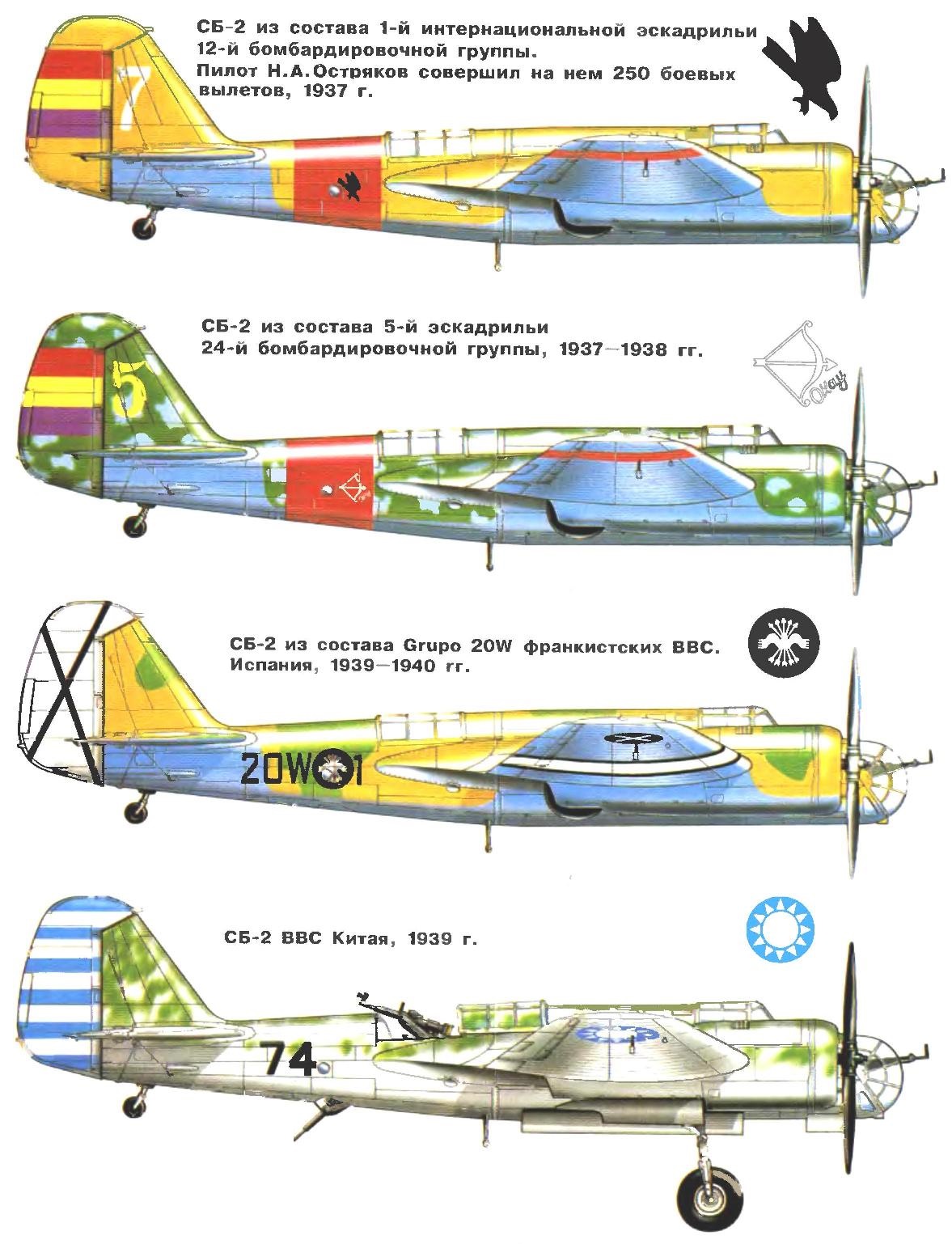 To repulse attacks of enemy aircraft the aircraft is equipped with three closed in flight gun emplacements. In the cockpit of the Navigator is the “spark” of the two movable ShKAS machine guns in the cabin arrow has two movable machine guns, each with one machine gun ShKAS. Ammunition “Sparky” consists of 1920 rounds. Feature defensive armament of the aircraft ANT-40 is that in cruising flight the machine guns in the cockpit of the arrow are removed polojenii in the fuselage and only when it detects enemy aircraft gunner opens the lantern of his car and removes from her top gun in position for firing. After the attack the turret rotates the gun barrel back (tail plane), and a machine gun fits into a special slot in the fuselage, is fixed in it and a canopy arrow closes together with the entire turret. The rise of the machine gun, mounted on turret arch, in the firing position and lowered into the fuselage are manufactured under its own weight arrow. A similar operation is carried out Lugovym a machine gun.
The aircraft belongs to a class of machines built with all the novelties of aviation technology, and is a very complex structure with a large number of individual complex mechanisms. Therefore it is necessary especially careful to follow all the mechanisms and glider plane to get good results with it.
N. Food reserve was, A. NECHIN, Kharkov