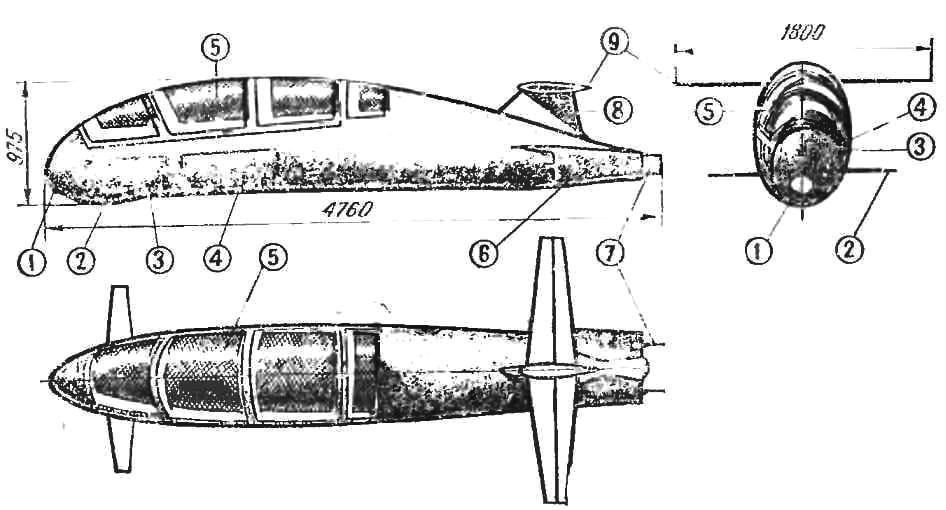 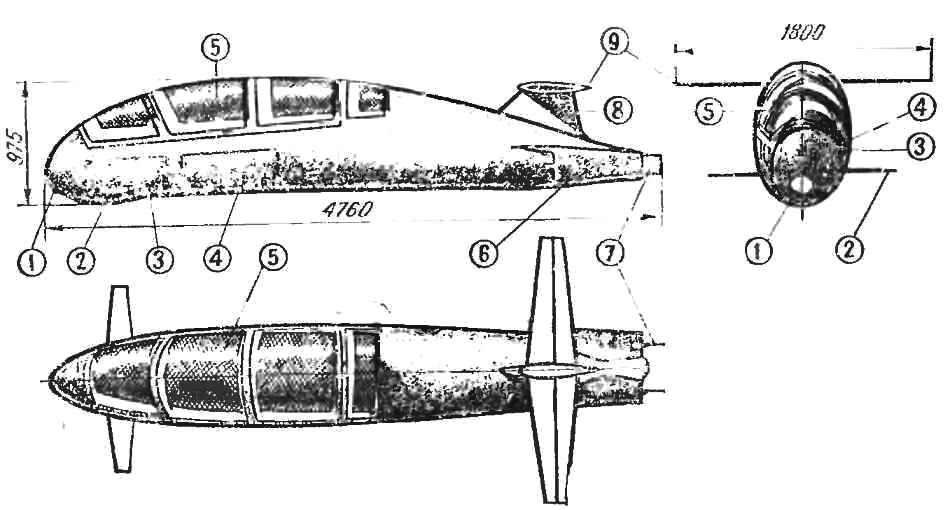 The individual system are two dorsal scuba gear of any type. The main materials are fiberglass and aluminum alloys. Widely used aluminum alloy D16, soft, seasoned, in the form of plates and moulded profiles. Made from this material stringers, beams, frames, individual components and subassemblies. Was also used steel of different brands, it made small parts and fasteners. For the glazing of the cabin applied in organic glass. Insulating and sealing elements made from PTFE and rubber of different brands. As the filler has been widely used foam stamps “PS-4”.
The housing is a collapsible, plastic, with girder-stringer power set and running smooth lining.
A longitudinal set of case consists of beams and stringers molded into the hull. Cross-set of frames and polosamota, molded as well.
Two main compartment of the housing separated power frame. With the help of special locks they’re disengaging and easily fit together, which greatly facilitates maintenance of the boat.
In the cab to the longitudinal and transverse set of mounted rails for the slide, which reinforced seat. This allows you to customize the Seating arrangement for the growth of the crew.
The frame of the lamp consists of rigidly connected transverse and longitudinal members.
In the equipment compartment there is a power set for fastening battery box and high-pressure cylinders. On the sides and in the bottom compartment are hatches for equipment maintenance, closed folding covers. The case has tow nodes, closed fairing.
Tailplane T-shaped, with raised handlebars depth. Fixed keel, fastened on the brackets to the housing. Jet rudders turn supplied nozzles water cannons; and controls the depth that they are driven by cables and units.
Controls the depth have differential management. The angle of deviation from the horizontal plane — 35 in both directions.
Front controls the depth connected directly to the control stick set of gears. From this pen are the ropes to the horns of the rear rudders of depth. Control surfaces at the rate of linkage connected with two pedals. Handle control the depth rudder located at the feet of the driver.

Fig. 1. Scheme boat “MAI -7”:
1 — headlight, 2 — front horizontal rudder, 3-4—hatches 5 — transparent canopy, 6 — inlet, 7 — jet rudders, 8 — Kiel, 9 —rear horizontal rudder.
System ballast chamber, for adjusting the buoyancy of the boat, consists of a rigid container, pipelines, valves, high pressure cylinder and a high pressure manometer at 150 ATM.
The on air control line is in the cabin, tear the driver, and the handle control valve for filling the chamber with water.
The ballast chamber is located at the front top of the compartment No. 2.
Emergency ascent is provided in case of failure of the ballast chambers or motors. It includes a control gear, ballast and drop the ballast. The system control is in the cockpit in front of the operator seat. Reset the emergency ballast hanging under the center of gravity of the boat.
The power plant consists of two engines battery and engine control systems.
The engine capacity of 0.9 kW each are complex, consisting of a reversible DC motor and reducer. The complex is enclosed in a sealed housing. On the output shaft is mounted the propeller shaft, enclosed in a water-jet ring nozzle. Fortified engines in the power frame, located at the rear of the equipment compartment. Frame and motors are attached to the body tightly.
The battery consists of 18 items. The box with the batteries installed rails in the equipment compartment. In the motor control system includes a command pullbox and apectacular. The motor control is carried out by means of levers located in the cockpit, on the panel left of the driver. Every signal from the remote is supplied in the box, where the engine is included in a specific mode. The control box is mounted on the battery box and is located in the aft equipment compartment.
Gidroavisalon devices allow a boat on a given route. These include: depth gauge, compass KI-11, watch, high pressure gauges, depth sounder, mounted on the dashboard in front of the driver.
In the bow of the boat has a pump-beam, which is used at great depths, where the illumination is not enough.
V. NEPOKOJCHITSKIJ. leading engineer of MAI