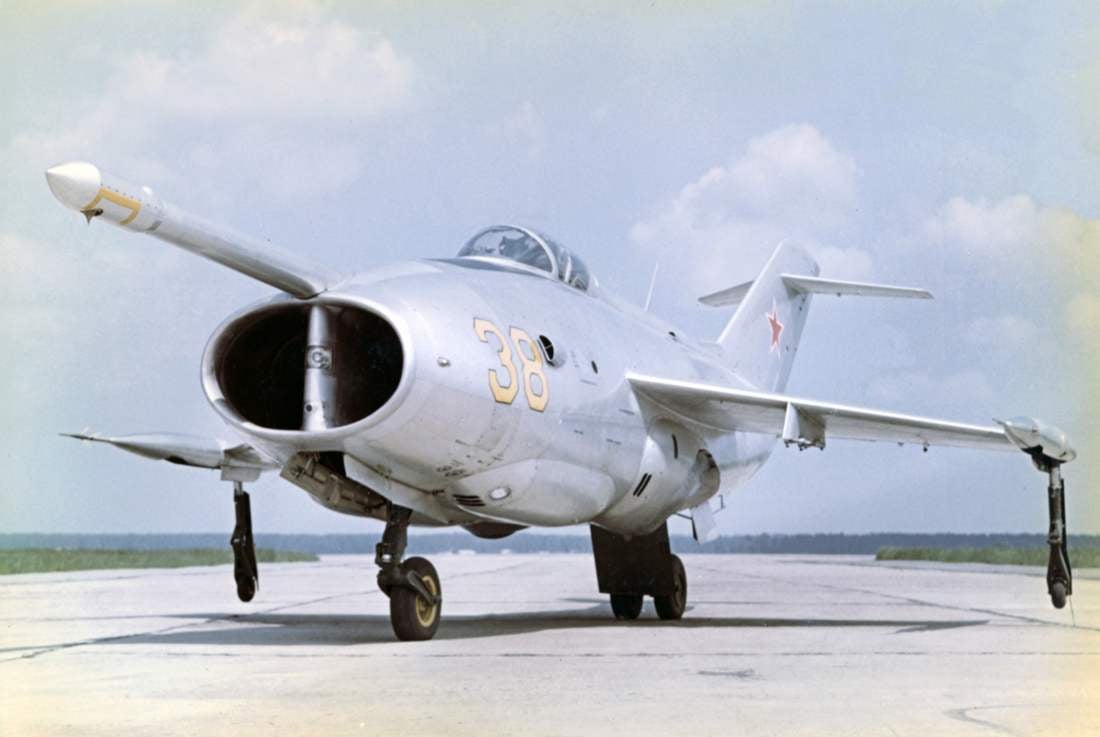 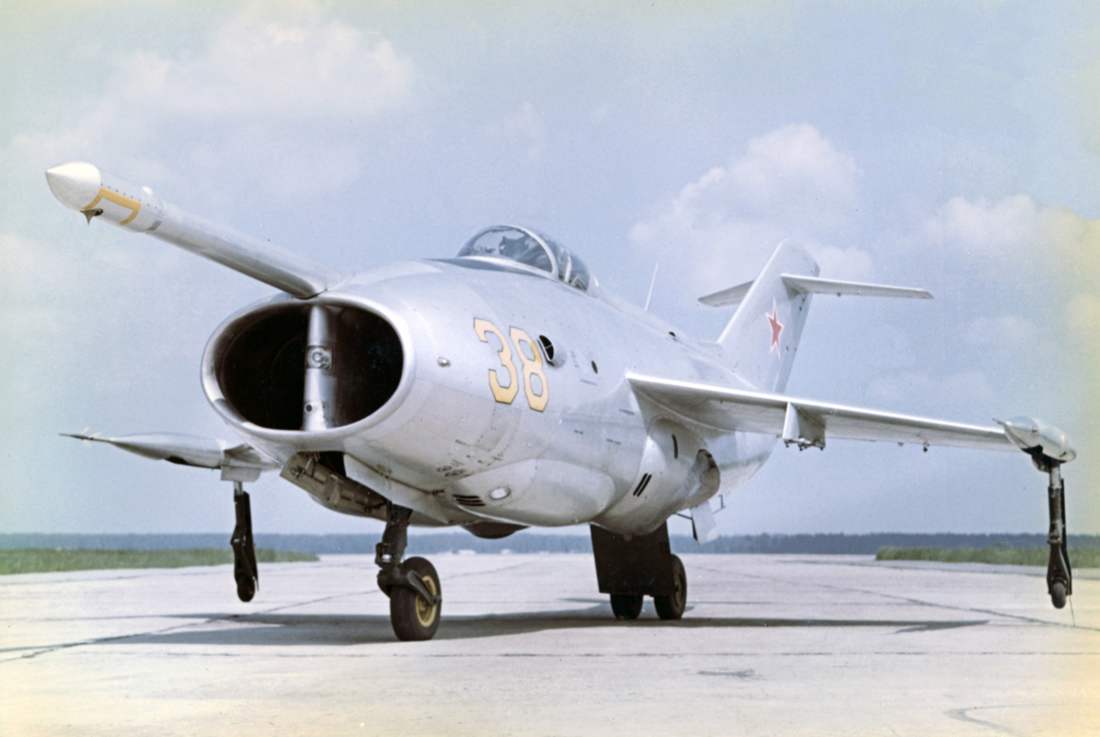 Vertical takeoff aircraft Yak-36. In 1960, Yakovlev made a proposal to the government to develop the aircraft vertical takeoff and landing (VTOL) Yak-104. The project involved the use of two lifting and propulsion uprated Р19-300 with a thrust of 1600 kgf with a rotary nozzle and one lifting Р19-300 traction 900 kg. It was expected that at flight weight of 2800 kg and the fuel capacity 600 kg VTOL aircraft can reach the speed of 550 km/h, climb to an altitude of 10 000 m and fly to a distance of 500 km.

If not considered research for the Yak-28ВВ only in 1961, some options were considered VTOL. Among them was a single-seat fighter-bomber with two lift-cruise engines Р21М-300 and attack aircraft with two turbojet engines Р11В-300. The machine was equipped with a turbofan wing units that have operated the gas jets podyemnaya engines. This solution promised a significant gain in mass.
At the turn of 1950 — 1960s, supporters of this decision was most professionals the leading aviation powers, including the Soviet Union. It should be noted that the idea of using a fan to create a vertical thrust is not dead she is currently used on us fighter X-35B, but with a mechanically driven fan.
In February 1961 of the state Committee for aviation technology (GKAT) was sent to the Commission of the Presidium of the Council of Ministers of the USSR on military-industrial issues of the report where, in particular, stated:
“…To ensure the weight characteristics of the aircraft requires the specific weight of the engine is of the order of 0.08 — 0.1 kg/kg vs. 0.2 — 0.25 of the modern turbojet. The creation of such a light engine with satisfactory characteristics is very challenging. In search of this solution in OKB-300 (Tumansky), OKB-165 (Cradle) and Lame work was carried out (…) to establish a power plant consisting of a turbojet and a turbofan Assembly, malorechenskoe TRD only for takeoff and landing and engine combined with a rotary nozzle…
On the basis of the work performed and considering the great technical difficulties of creating a VTOL, as well as the complete lack of experience in this matter (…) Yakovlev and Tumansky make the following proposal:
In the first phase of the work was to create a single prototype aircraft such as fighter-bomber for the study of the piloting technique and combat use. The plane to build with two engines Р21М-300. Modernization of P21-300 will be carried out to increase traction and facilitate its… Engine will be equipped with a rotating nozzle.
The weight of the payload is 500 kg, the maximum speed at an altitude of 1000 m to 1100 km/h, range — 500 — 600 km. the Vertical thrust engines 2×5000 kgs in weight 2×950 kg.
Start date of test — IV square 1963
For the further development of work on VTOL to study the creation of an aircraft with large flight weight and with a more powerful power plant. The new power plant can be established on the basis of Р21М-300 equipment turbofan unit, which will provide a vertical thrust of up to 10,000 kgs. Aircraft such power plants can have a takeoff weight of 18 000 kg”.
To implement the adopted draft of the aircraft, first received the designation Yak-In (product “B”), and later the Yak-36. The draft government resolution on the development of a single-seat fighter-bomber with engines P21 M-300 thrust of 5000 kgf was prepared in April 1961 requirements for the aircraft provided for his flight with a maximum speed of 1100 -1200 km/h at 1000 m altitude Takeoff weight was not to exceed 9150 kg. the Rest of the design features corresponded to the above the report GKAT.
To accelerate the development of a system of stabilization and control of VTOL was proposed to conduct tests of the prototype of the fighter-bomber with two turbojet existing P21-300 thrust 4200 kgf, equip them with rotary nozzles. The government decision came on October 30, 1961
The future development of the Yak-36 was headed by SG Mordovin, who later became Deputy chief designer. Leading engineers in the car were O. A. Sidorov and V. N. Pavlov and flight tests — K. B. Bekibaev and V. N. Pots.
Actually designed experimental aircraft. A milestone on the way to it was created in 1958 in Lutoslawski Institute under the guidance of A. N. Rafaelyantsa research aircraft “Turbolet” with TRD AM-5. It was intended to explore modes of vertical takeoff and landing, as well as the efficiency of gas-jet rudders. The lead pilot of a “flying stand” was Yu. a. Garnaev, but no less impressive it was piloted by S. N. Anokhin, F. Burtsev and I. G. Zakharov. Of these, only Yu. a. Garnaev had to do with the Yak-36. In 1959, the OKB-26 was developed Turbolet “Sharp” with the engine R-25-26.
By this time in the UK have already flown a VTOL Harrier with one of lifting and sustainer turbojet engine and four rotating nozzles. Unlike Western counterparts, the domestic aircraft plane “” went on his way.
The purpose of the aircraft and the choice of the lifting and propulsion turbojet Р27В-300 g revolving nozzles led to the installation in the nose and tail parts of the fuselage jet rudders high thrust. One of them actually had to bring forward on a long rod, because their task was not only control of the plane under transient conditions, but the balancing apparatus to hover. The engines were placed in the nose of the car, and their nozzles in the area of the center of gravity. This decision, taken 15 years later after the first domestic jet fighters led to return to being transferred to the scheme.
A similar arrangement of the power plant led to the use bike chassis with a one-wheeled and two-wheeled rear bow supports. The wing supports were removed against the direction of flight in the fairings, while on the right installed a standard receiver air pressure (LDPE) with sensors of angles of attack and slip (DUAS). The design of the airframe was typical for airplanes of those years: semi-monocoque fuselage and longerone wing flaps. 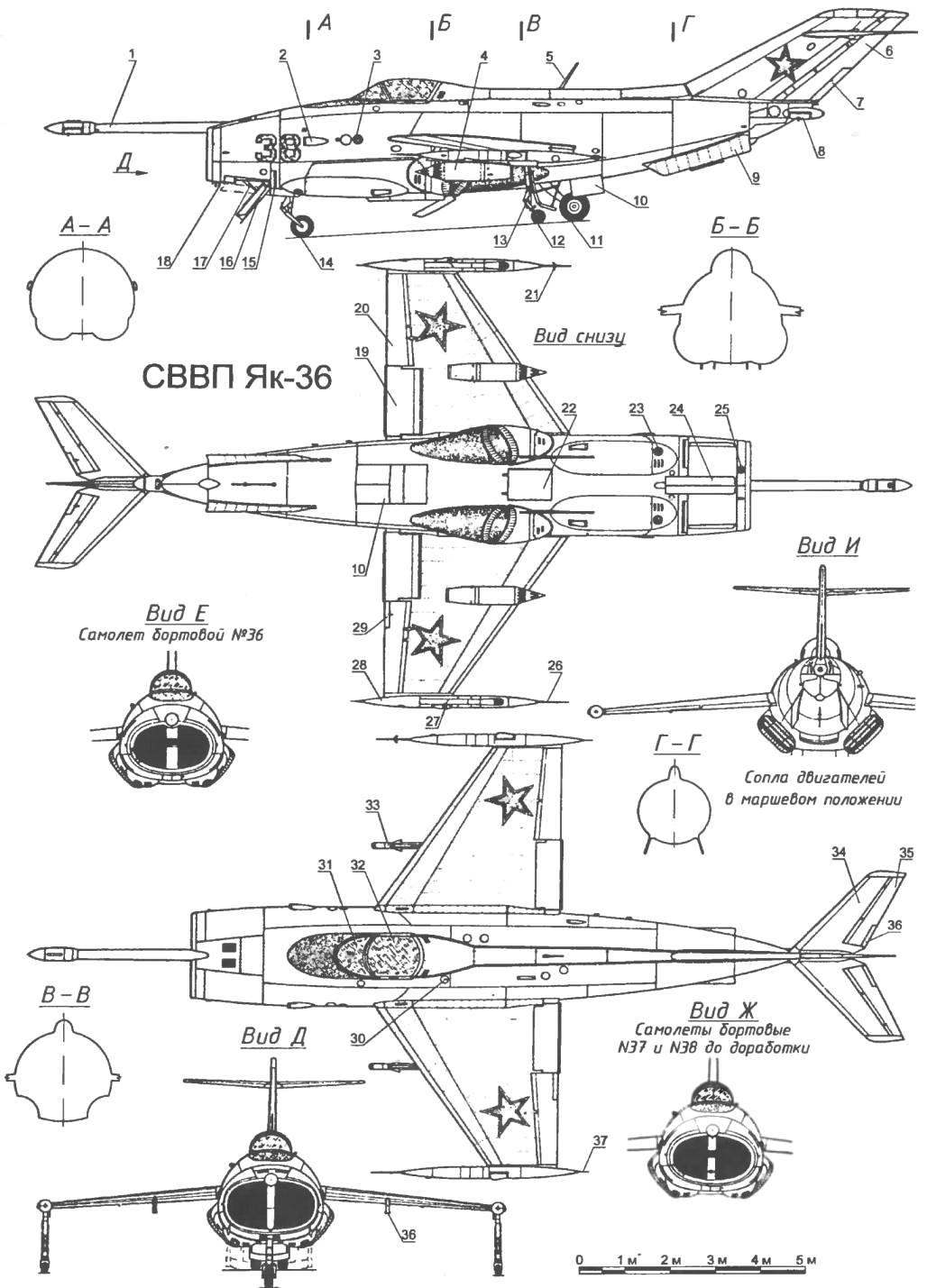 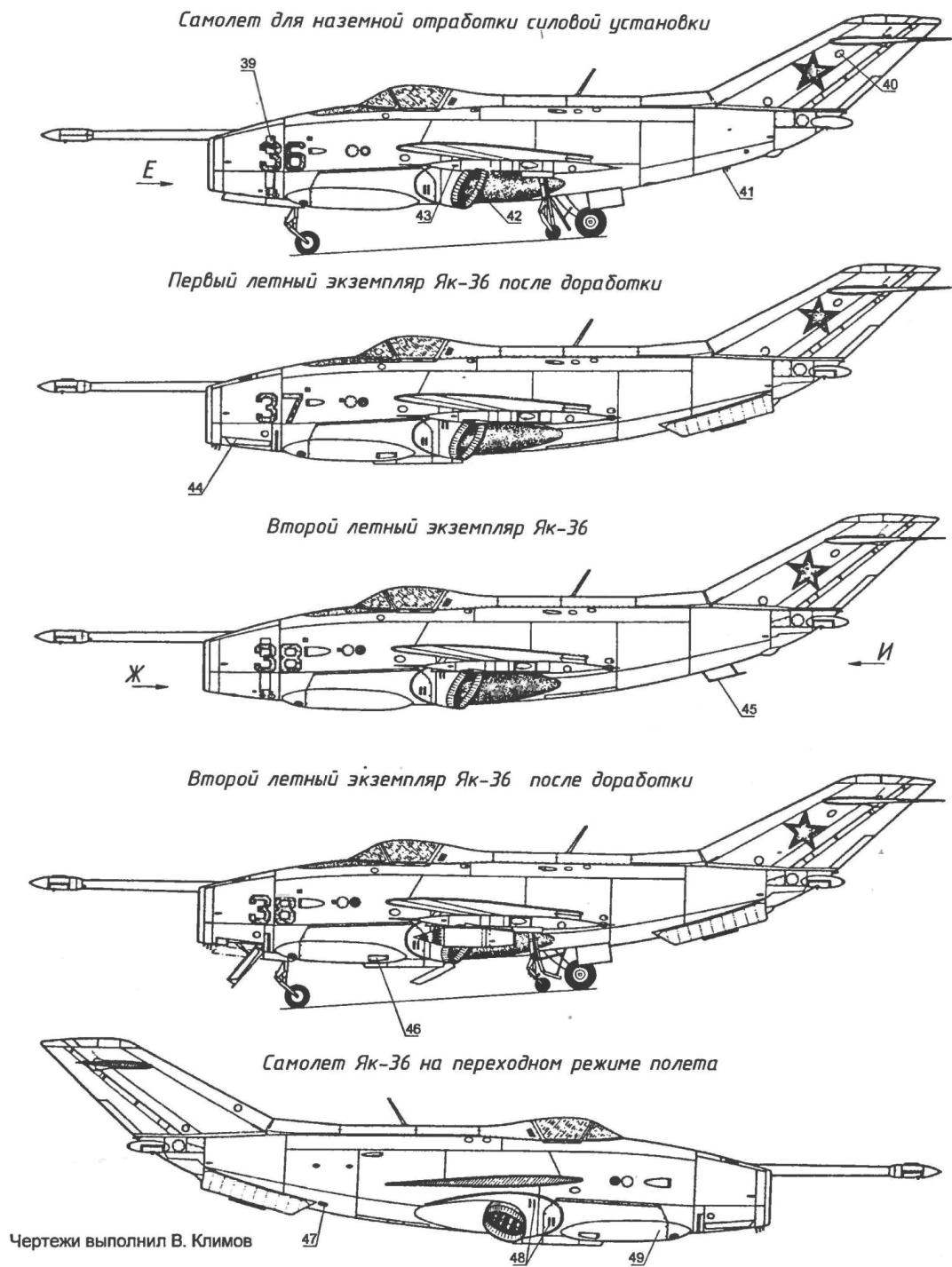