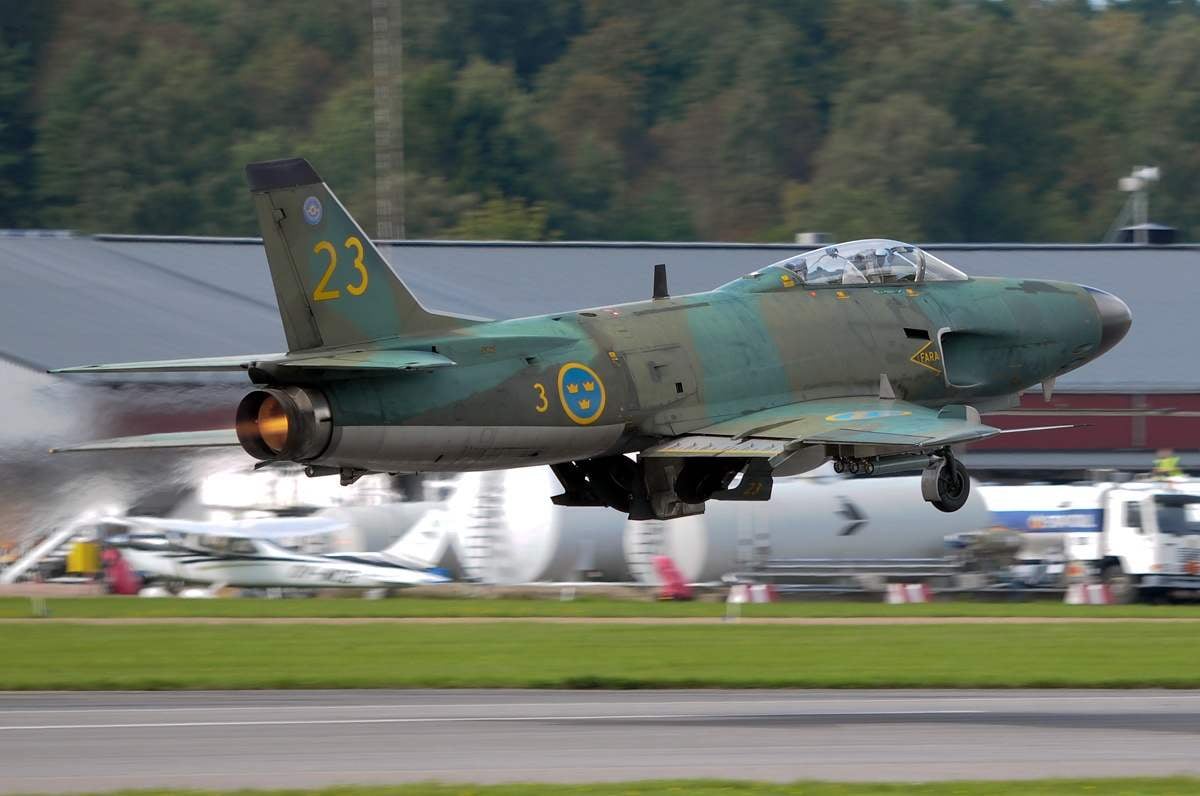 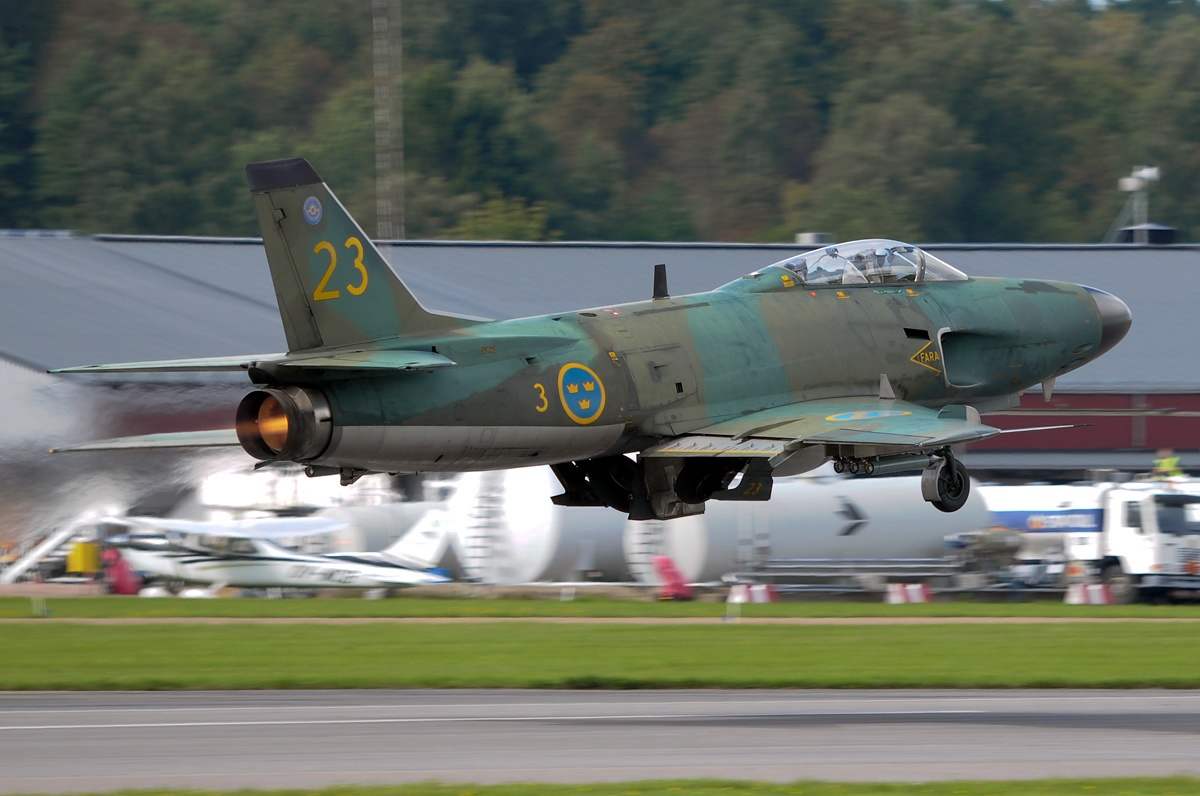 Sweden was and remains one of the few countries in the world, able to create a world-class aircraft. Combat aircraft of that Scandinavian countries have always been some kind of “twist”, they should not be confused with similar machines from other countries. In a world quite similar to each other planes, but similar to the Swedish fighter, perhaps, could not be found. The explanation, in my opinion, is simple: since its inception in the late 1930-ies the Swedish aviation industry is not copied already built foreign aircraft, designed and built their own samples. And the fact that in a short time the Scandinavian engineers to develop could not (for example, modern jet engines and electronic equipment) purchased abroad, including a license for their production. The result of this competent technical policy was the fact that in the postwar “jet race” Sweden is practically not inferior to the world’s leading aviation powers, and in some cases even ahead of them.
In this article we will not go down in aviation history, but will tell only about creating a single plane, for more than two decades formed the basis of the tactical aviation of Sweden. This SAAB 32 “Lansen” (“spear” — Swede.) attack, fighter, reconnaissance, electronic warfare aircraft, towing targets, aerial targets simulator, a platform for fine-tuning of future systems.
The development of jet-powered attack aircraft to replace the piston bombers of the SAAB IN-18, SAAB J-21 and J 30 (De Havilland “mosquito”) began in 1946. Initially the project had the designation “Р1100” were calculated under two turbojet engines of English manufacture. In its cargo Bay could accommodate two bombs caliber 500 kg or up to 12 NAR caliber 150 — 180 mm. At the design stage considered a variety of aerodynamic configurations, with one of the most promising was considered a “flying wing”. However, given the not entirely successful international experience of implementation of such a scheme in those years, Swedish designers have abandoned it in favor of a traditional classic. Powerplant “cut” to a single engine placed in the fuselage.
As a result, in 1948, the project Р1150, which became the prototype of the serial car. At the same time the Royal air force elaborated on the tactical and technical requirements for a promising attack aircraft, which, incidentally, was quite hard. Asked to have a new double plane was ready for all-day use in all weather conditions, had a powerful impact weapons (guns, bombs, NAR and guided missiles), integrated electronics and weapon control system. And most importantly — the new bomber must be able within an hour from the center of the country to reach any point on the coast of Sweden, stretching over 1245 nautical miles (about 2000 km).
Actually “Lansen” began to develop in December 1948 already as a project “type 32”. In parallel with work on a single version of the day fighter-interceptor. In comparison with the prototype, the project has undergone minor changes, in particular, the horizontal tail was moved from the keel to the fuselage. For the first time in the practice of the Swedish aircraft designers have applied mathematical methods of modeling constructs, which were calculated for operational overload of +8 to -3 units (failure overload of +12 and -8 units). 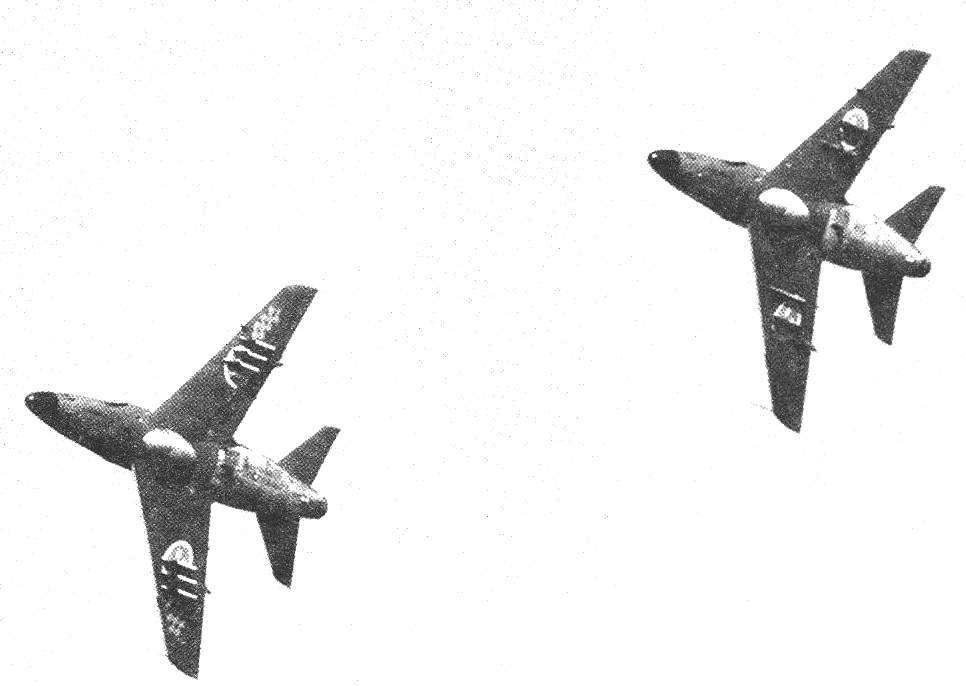 SAAB J32B in flight
The aircraft was designed to fly at transonic speeds, on this basis was formed and its aerodynamics.
The wing is supplied with automatic slats (later refused), the ailerons and large flaps of the square Prowler. Testing of full-scale wing layout (scale 1:2), as in the case of earlier development of the fighter company SAAB 29 “Tunnan”, was conducted on the flying laboratory, which performs the role of single-engine light SAAB 91 “Safir”.
The main obstacle in the progress of the project was the power plant. By the way, this situation in the aviation industry is the rule rather than the exception, and Swedish designers in this regard are not alone. Initially it was assumed that the “type 32” is equipped with an engine Swedish design “Govern” (RM 4) manufactured by STAL a thrust of 3300 kgs. Delays with its development was forced to make a decision about installing a TRD plane English “Well” 100 series, which in the embodiment of the R. A. 7R with afterburner built under license in Sweden under the designation RM5A2 (afterburning chamber was designed by Swedish engineers). Besides, the English copy was developed of 4500 kgf thrust in afterburner, which was considerably more than expected from the Swedish “Govern”.
For aircraft was developed and a new ejection seat SAAB Round 3, equipped with two-stage powder charge. Minimum safe height of ejection was approximately 50 meters. The chair were installed in the plane to separate tracks (similar solution was used on the products of the company “Martin-Baker”) and had a system that improves the smoothness of moving the seat at ejection. The canopy had a peculiar shape, and the emergency reserve is first Packed in the rigid case, in order to reduce the load on the spine of the pilot in the ejection moment. The chair was operated in two ways: by pulling derrek located between the knees of the pilot, or a protective curtain covering the face.
The first flight of the prototype took place (in the fall. — Approx.ed.) 1952. The plane was piloted by chief pilot company test pilot bent Olavo (Bengt Olow).
The flight was successful, it was followed by the test. October 25, 1953 the aircraft in a shallow dive broke the sound barrier. Soon, the test connected all four instances of prototypes in parallel preparation of serial production, was determined by the construction plans. It was supposed to build a car in three basic versions: percussion, all-weather fighter-interceptor and Maritime reconnaissance.
The training version was not originally planned. At the same time, the design included the installation of controls and some of the backup devices in the second cabin, so the need for a spark disappeared by itself.
In 1955 the first production A-32A “Lansen” entered service with the Royal Swedish air force, marking the beginning of re-strike squadrons to jet technology. Strike variant of the aircraft was at that time quite a dangerous weapon. Four 20-mm cannon “Bofors” M-49 General ammunition ammunition was located in the forward fuselage. Military exercises, as a rule, limited to 80 rounds per gun. In flight, the trunks were closed with special doors that could be opened by the actuator before the shooting. Hillsoboro guns had not, so the intakes of the engine were protected by special ridges on either side of the fuselage, and the outboard fuel tank was in front of isoprene pad. By the way, the interceptor hillsoboro has already been used. 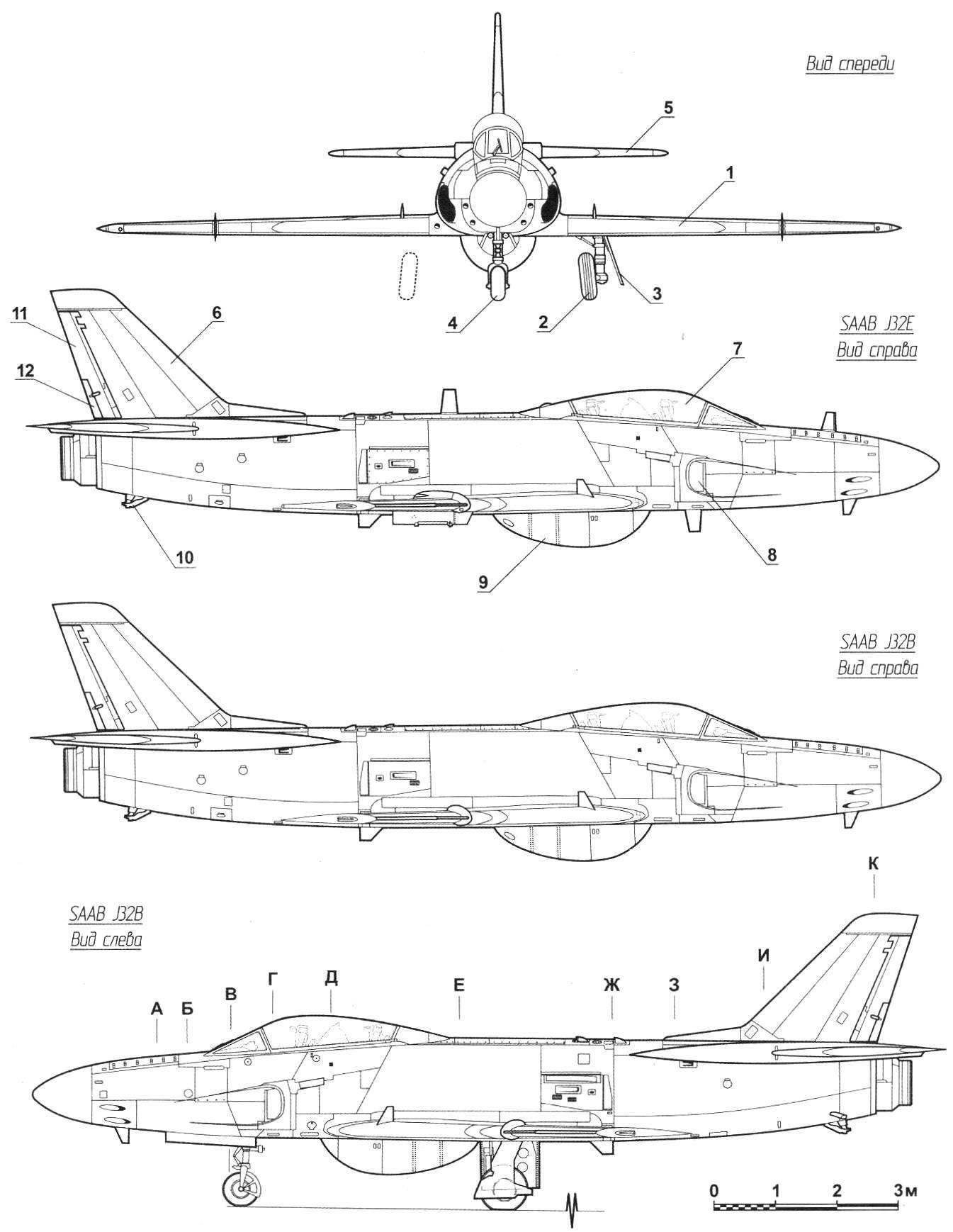 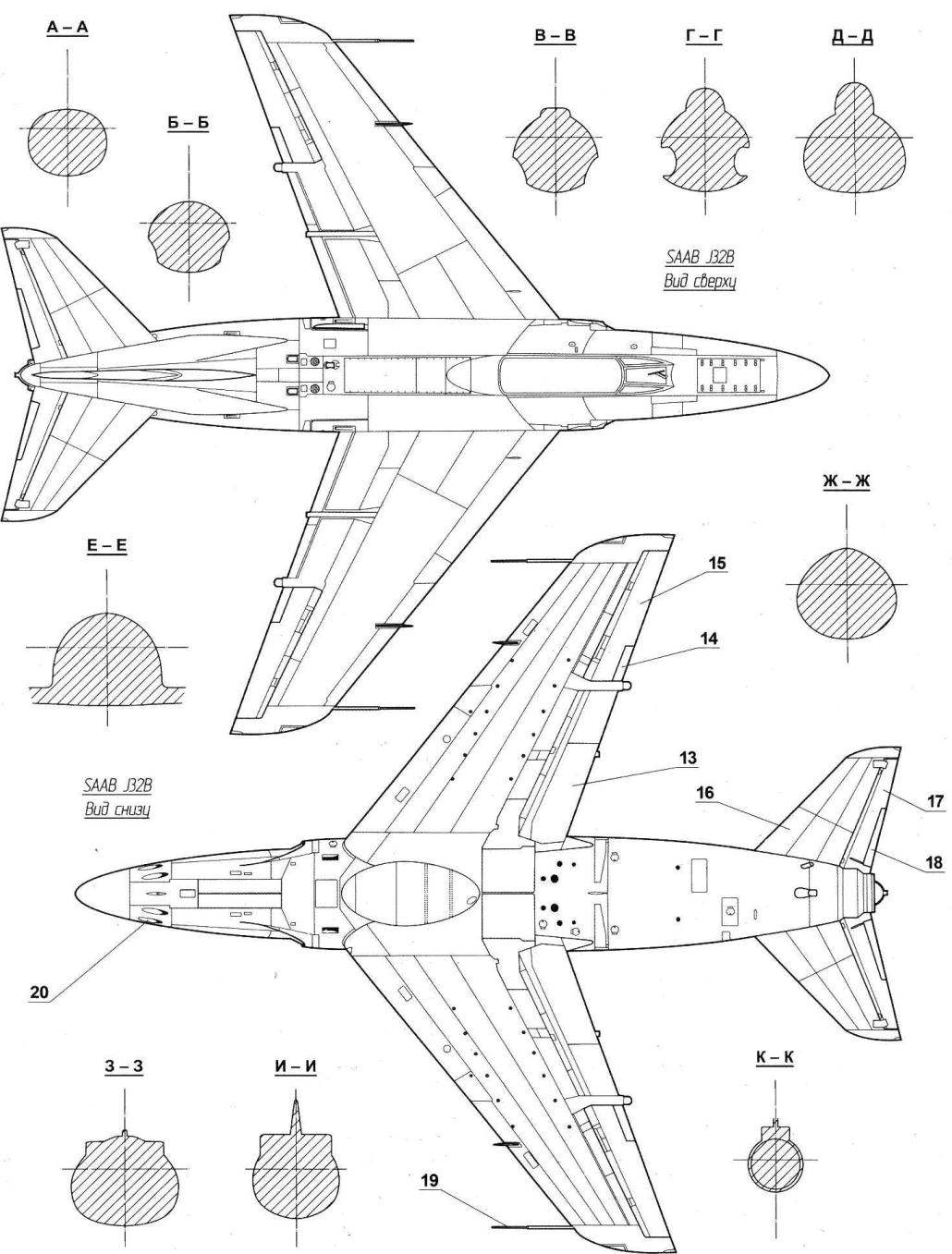 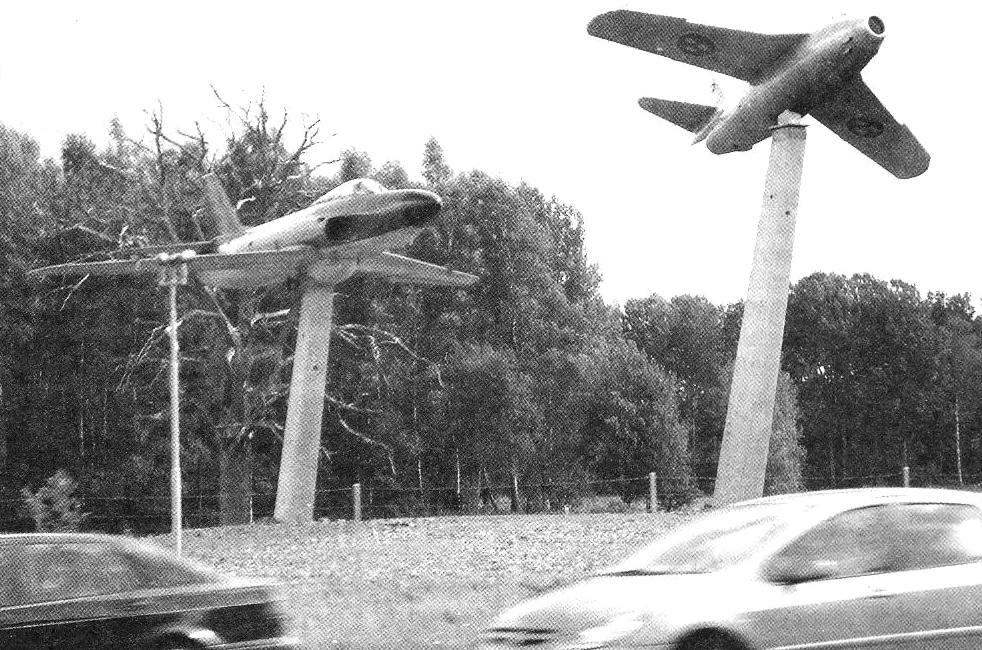 The aircraft company SAAB on the pedestal
But this option is not out of the design stage. In 1958, the final decision on the replacement of “Lansana” eight years later, new aircraft “Viggen”. However, the technical difficulties encountered when creating a new machine, and did not rule out other scenarios. Was seriously considering the purchase of foreign technology, potential candidates appeared: a-4 “Skyhawk”, A-7 “Corsair”, F-104 “Starfighter”, F-5 “freedom fighter”, the F-4 “Phantom” and “Bakanas”. All applicants, except the last two, were excluded from the list as not meeting the entire list of requirements. “Phantom” was very expensive, the money could build more than two hundred modernized “larsanov”. And the new “Viggen” by criterion “cost — effectiveness” was to surpass and “Phantom”, and “Bakanas”. Therefore, as an interim solution in 1965 was considered finalized, interceptor J-32V in shock AND 32B, having an enhanced design, a more powerful engine RM-6S and a set of weapons designed for “Viggen”. Delivery of this option could begin in 1972, but the “Viggen” “ripe” in time: the first strike aircraft was delivered to the Swedish air force June 21, 1971.
During the serial production was released in a total of 456 aircraft in three main versions. The first Stroy left the fighter-interceptors, in 1973 they were replaced by “Viggen”. Five years later — bombers and scouts.
But the “Lansen” twenty years served his country, though in other guises.
In 1972, six interceptors have been modified to tow targets — J-32D, which operated until 1997. Another 15 cars since 1972, were converted into electronic warfare aircraft, the J-32Е. In the fore part of the former fighter is radar identified a set of G24 is designed for jamming ground-based and naval radar. There were three different stations on the wave band (frequency L, S or C). On under-wing pylons were placed in the containers jamming “Adrian” (frequency S or C) and container jamming against airborne radar “Petrus” (frequency X) and two containers with chaff BOZ-3. The aircraft was used until 1997, including for the training of personnel of the armed forces of Sweden.
Three J-32B was fitted with dual controls and used as training aircraft, as well as for collecting samples of atmospheric precipitation, which had three special containers with paper filters. After the flight filters were removed from containers for further analysis. Interestingly, two of the aircraft are still operated in the interests of the Department of radiation safety of Sweden to collect air samples at high altitudes.
Some planes have long been used as flying laboratories in the development of new aviation technology. For example, in А32А (factory number: 32080) to 1962 — 1963 had a new ejection seat, designed for SAAB 35 “Draken”, and later this machine became a flying stand to develop many new systems “Viggen”.
“Lansen” was not exported and did not participate in armed conflict, though such an opportunity once presented. In 1955 the Israeli government, after unsuccessful attempts to buy American “sabre”, appealed to the Swedish government with a proposal for the procurement of SAAB 32 to counter Egyptian MiG-15 and MiG-17, but was refused.
However, Swedish “spears” were still abroad, but as Museum exhibits. Museum of air power USA (United States Airpower Museum) acquired three “Lansana”, and it was reported that in 2003 it was planned to bring one of them in flying condition. In 1986, the Swedes traded one plane to another rarity is the “Dove” company “De Havilland”. In the UK, the car received a registration and a registration mark G-BMSG. Remaining service life of the airframe before the sale was 1 hour 39 minutes, and almost all of it was consumed during his flight to England. Another car in November of 1999 I flew to Spain, where he is now exhibited in the Museum of the Spanish air force in Madrid. And, of course, in most of Sweden “Lansen” — one of the main exhibits several aviation museums, it can also be seen on the pedestals at the entrance to schools and air force combat units, and then just near the highway. And who knows how many Swedish boys, looking at these monuments of their own history, lit up the dream of becoming a pilot, air traffic controller, aviation engineer or mechanic?
I. MIHALEVICH, Kaliningrad