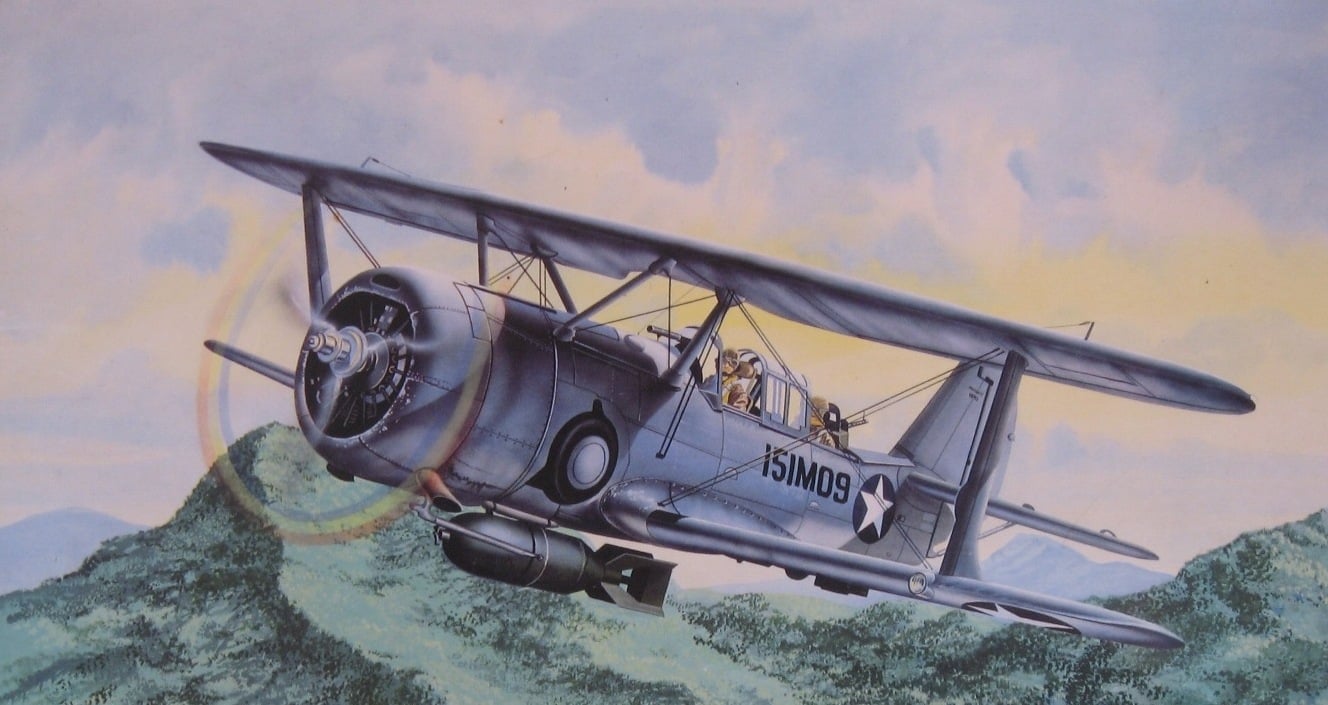 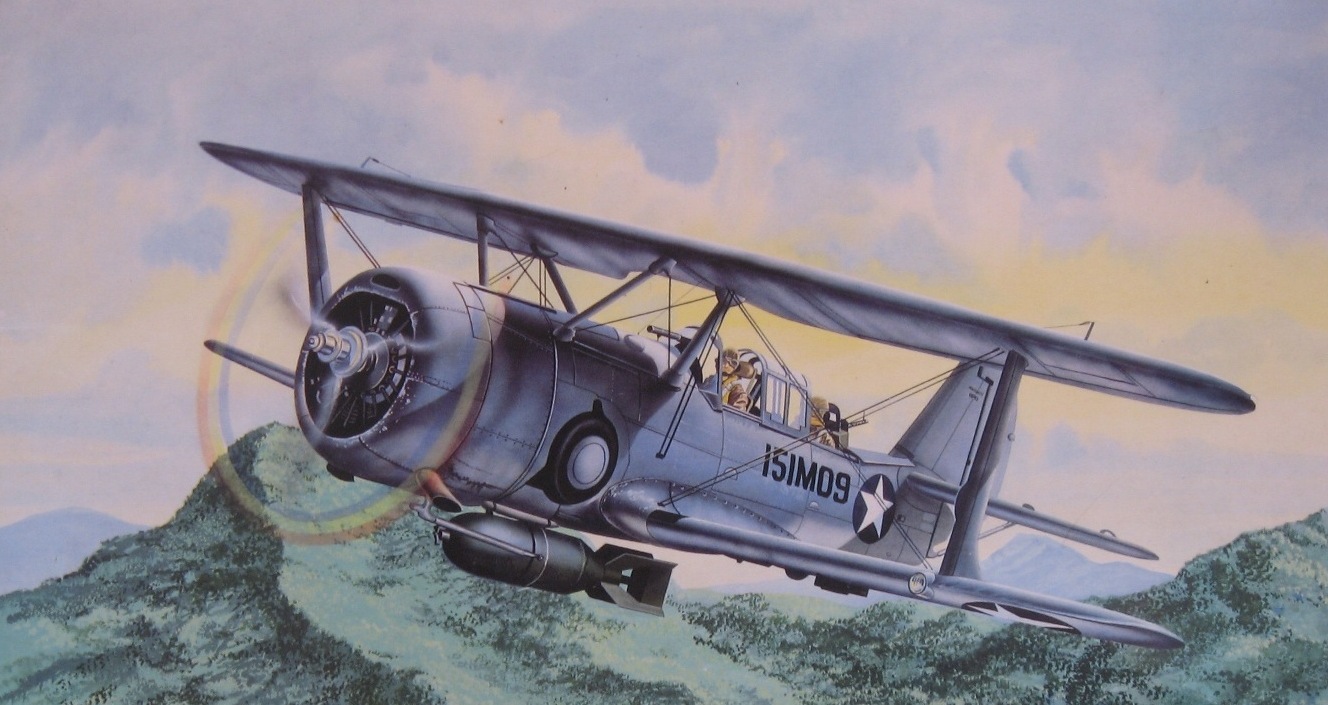 His first flight of the new fighter was made in October 1933.
Simultaneously with the development of the monoplane Curtiss firm has built single-seat fighter biplane XF11C-3 which was a deep modernization of the last of the famous series of “hawks” fighter F11C-2 Goshawk. By the way, the new car has been stored the landing gear retraction system by pressing the main wheels to the niches on the side of the fuselage, first proposed by the firm Grumman.
In 1933, the Navy refused double deck fighters. And a new aircraft company Curtiss redeveloped. On the XF11C-3 had entrusted the execution of fighter-bomber tasks, and the XF12C-1 — reconnaissance. Changed and designation: the planes are called, respectively XBF2C and XS4C-1.
In February 1934 fighter-bomber BF2C-1 with engines R1820-04 700 HP has launched a small series of 27 aircraft. The machine was armed with two 7.62 mm Browning machine guns, four of 52.7-kg bombs or one bomb caliber 215 kg In January 1934, the scope of scout XS4C-1 has expanded, making him run bomber tasks. The final designation of the aircraft was CACIBs-1. Changing the destination of the aircraft resulted in the installation of the new engine— Wright R1820-80 with a capacity of 625 HP During the next test flight the machine has demonstrated fairly high for its time, the speed of 350 km/h at an altitude of 2440 m. the Maximum flight altitude amounted to 7315 m.
In flight tests of the aircraft was dive bombing. During four flights on 14 June 1934 the aircraft was to demonstrate the ability to strike at ground targets with a dive 227-kg bombs.
The car was off from the factory airfield. In the first two departures XSBC-1 showed excellent results. In the first fight bomber overclocked to 420 km/h in a dive, and the second — to 470 km/h Maximum overload at the output has reached 4g. The inspections of construction after planting showed residual deformations or other damage. However, the pilot P Hogarth complained of a slight tail buffeting, but nobody paid serious attention. Before the fourth flight, the weather began to deteriorate immediately after takeoff, the plane went into cloud and was lost visually by ground observers.
Suddenly even the noise of the motor was interrupted by a sharp Bang, like an explosion. The sound was heard, but no car, no pilot no one saw. A search began. XSBC-1 were found in 10 km from the runway near the small city of Lancaster. The fuselage and wing were lying separately and was in good condition, except for a few dents received in the fall. Suspended bomb is not detonated. The pilot was found in the nearest city hospital, where his broken arms and legs drove the ambulance, called by the locals.
As told by the pilot the accident occurred on the entry of the machine into a dive at a relatively low speed. It all started with the fact that the rotating propeller lost a blade, which resulted in strong vibration. The first could not stand stabilizer — its surface literally happened to the keel. Began a disorderly fall. The pilot managed to escape from the cockpit, and he left the plane at an altitude of about 3600 m. the Parachute opened automatically.
After analyzing the causes of the accident and ACE revealed the shortcomings of the design firm July 6, 1934, presented to the Bureau of aviation of the Navy (BuAer) a new, significantly redesigned version of the aircraft. The designers carefully studied and strengthened all the weak components and assemblies of the machine, mounted one wing, turning it so the biplane, developed a new fuselage-monocoque, getting rid of the roll cage, and used a more robust three-bladed propeller Curtiss Electric company. In addition, the lamp tried to seamlessly fit into the contours of the fuselage, and the rear fairing made for the emerging of Heliconia the sector of fire of the rear gunner. The increased mass and drag was offset by the installation of modern engine Weight XR1510-12 700 HP
The military has approved the project and gave him the designation XSBC-2. On the ninth of December, 1935, the plane rose into the air. 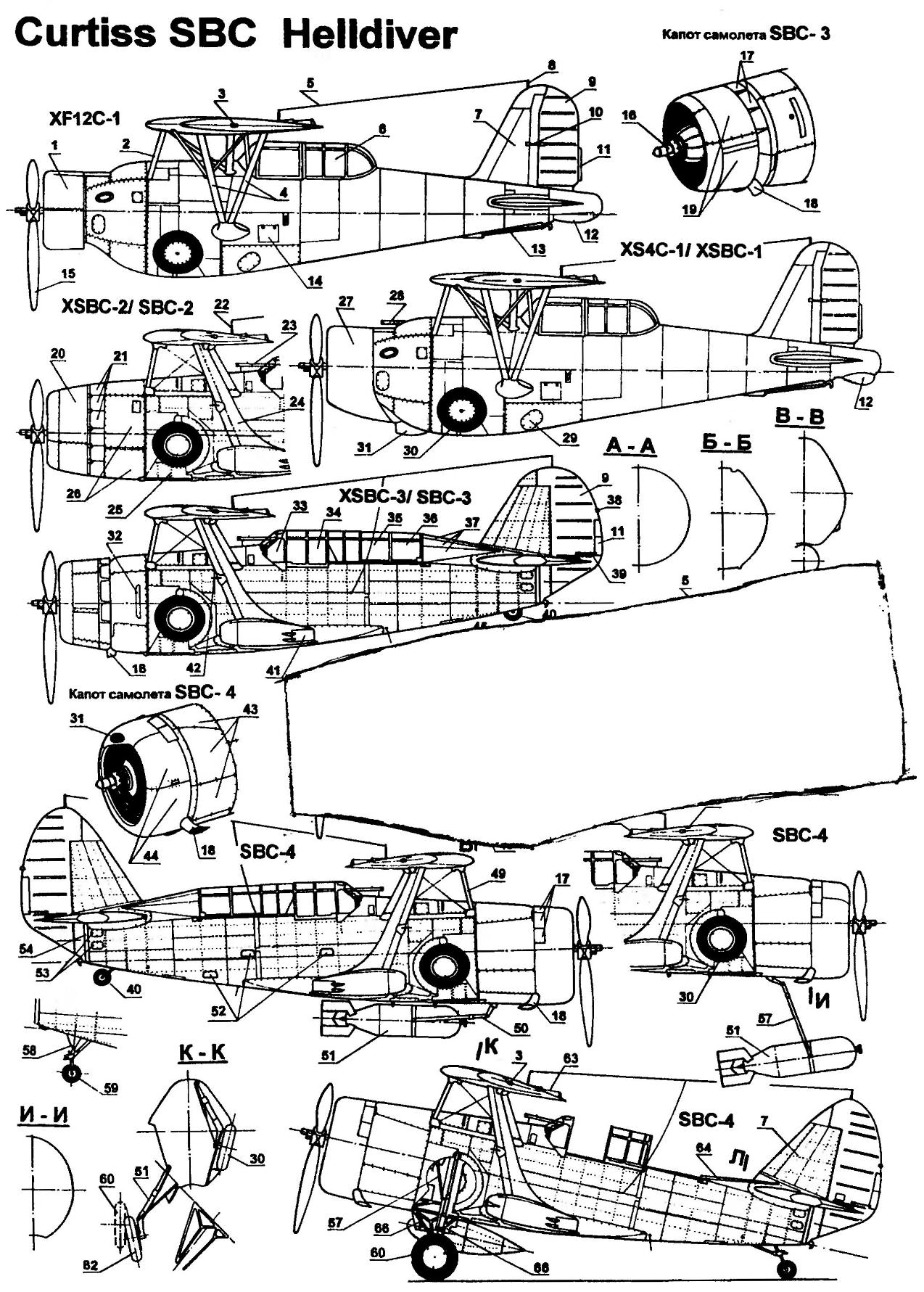 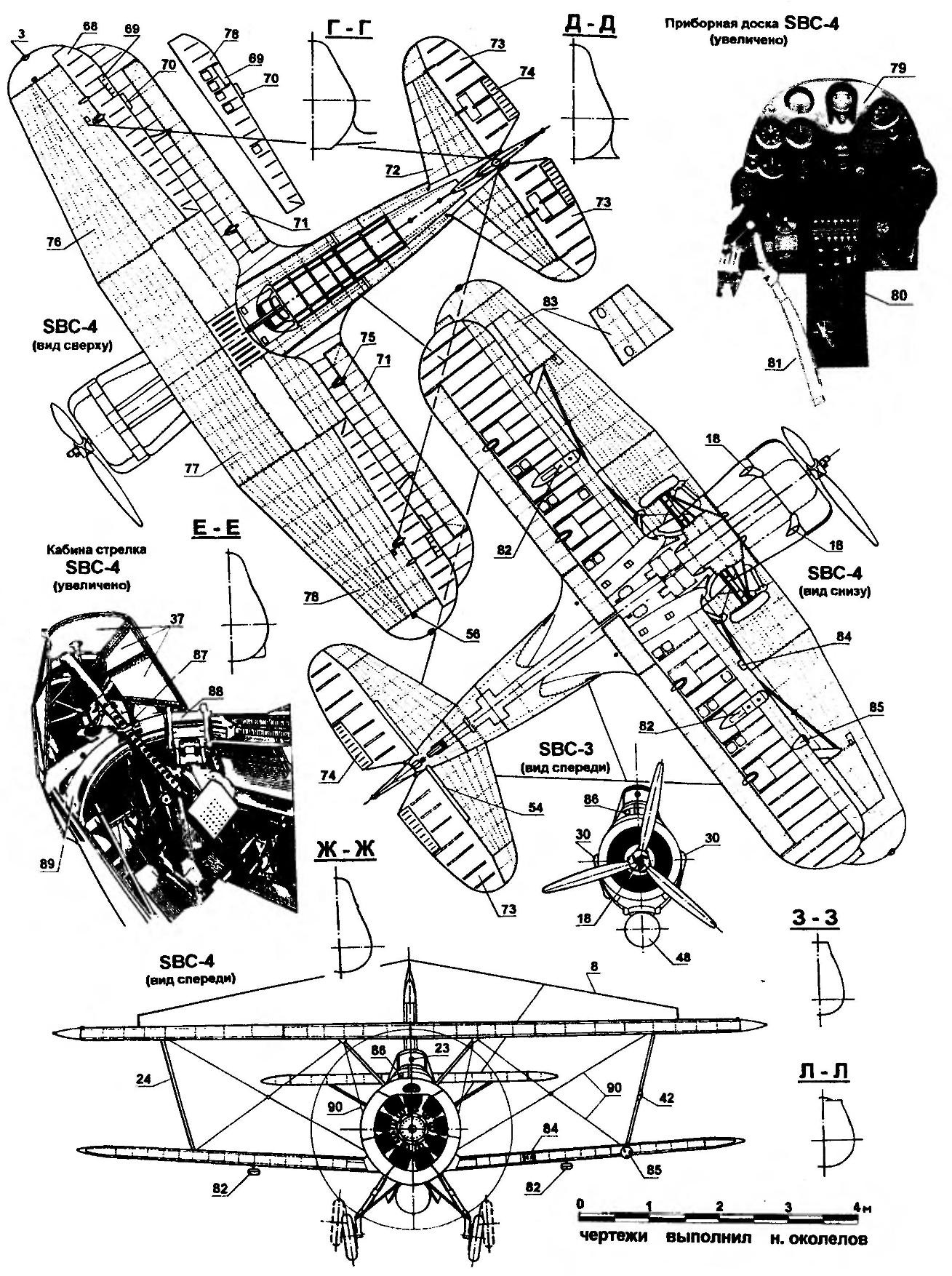 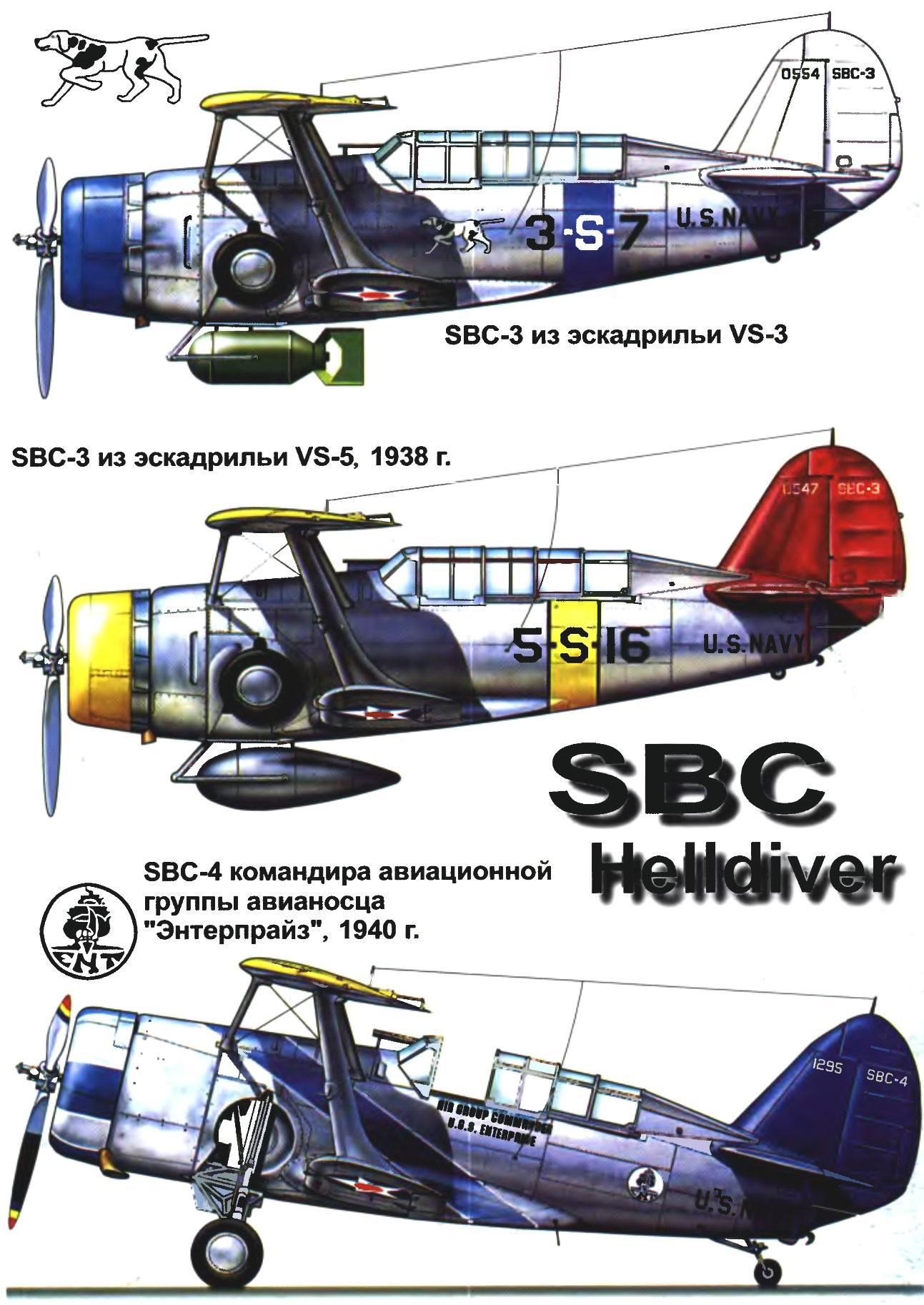 The cockpit and the radio operator was closed with a single fully transparent canopy and consisted of several sections. The first section was a fixed visor of the cockpit, second, savyasachi on the flight back was part of the cockpit, third, the fixed part of the lamp, closed the station and the loop antenna of the radio compass, fourth, savyasachi forward, belonged to the cab radio operator-gunner.
The cockpit was equipped with a full set of navigation equipment, located on the Central panel of the dashboard. On the side panels were placed appliances radio, dashboard bomb arming, and the engine control. On the right side of the cab located control arm brake flaps-flaps are used on takeoff, landing and when the bombing in a dive. Control plane standard: knob control the ailerons and Elevator and pedals associated with the rudder.
In the cockpit of the arrow on the turret was fixed 7.62-mm machine gun, and under the power station and radio compass housed rescue equipment that is used during a forced landing on the water or out of the airfield. In the stowed position the gun is completely removed. To increase the field of fire outside the fairing was folding (section fairing was involved inside of the fuselage).
The wing of the plane made by the scheme biplane, cantilever, all-metal. Upper — single-spar, lower two-spar.
The top wing center section consisted of a rectangular shape and a pair of consoles with a sweep of 10 degrees to the front edge. The wing originally plain, later — dural. Across the rear edge of the end sections of the upper wing housed the ailerons managed trimmers and rejected on the ground balancing knives. Control ailerons hard, from the control stick.
To the fuselage the wing was attached to four pillars. The lower wing consisted of the left and right planes. At the trailing edge of the wing mounted flaps, which were used as flaps in the takeoff and landing and as the brake flaps in the dive. The installation angle of the upper and lower wings 1.5 degrees. Together, they were joined by two shaped t-shirts. Additional rigidity of the box wing attached steel band-brace.
Empennage cantilever, all-metal. The covering of the keel and stabilizer — dural, and rudders and height and fabric. On rudder and elevators installed operated trimmers.
Chassis — tricycle, tailwheel. The main racks were cleaned in a special niche in the fuselage, located in front of the fuel tank. At the tail support in the fuselage was removed just front. System cleaning and landing gear— hydraulic, depreciation of the racks — oil. The main landing wheels were equipped with pneumatic drum brakes.
Powerplant of the aircraft — Phillips 19-cylinder engine of air cooling Wright R1820-22 Cyclone with a capacity of 950 HP with a three-bladed variable-pitch propeller.
The aircraft was armed with two machine guns: the exchange rate of 12,7 mm turret, a movable 7.62 mm in the cockpit, radio operator-gunner. The latter could fully retract and gain a foothold in the cab in the stowed position.
In the Central ventral node hung a 454-kg bomb, and wing holders — two 227-kg bombs.
Performance characteristics of a scout bomber Curtiss SBC-4 HELLDIVER
Wingspan, mm………………….. 10 360
Length, mm………………………………… 8570
Height, mm…………………………………3170
The wing area, m2…………………29,45
Maximum speed
at a height of 4365 m, km/h………………….377
Cruising speed, km/h……………282
Practical ceiling, m……………..7315
Range
bomb load, km………………652
Empty weight, kg……………………….. 2065
Maximum takeoff weight, kg ………….3211
N. Food reserve was, A. CHECHIN, G. Kharkov